- Tarifa
(left - Mosaic at Italica; right - decoration at the Alcazar of Seville) 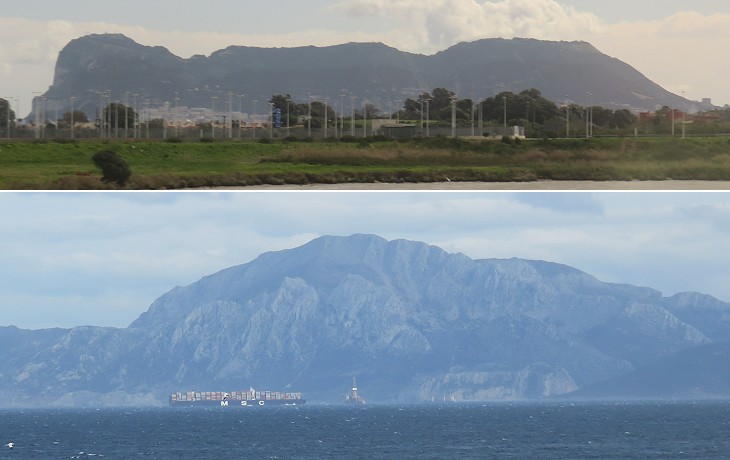 The Pillars of Hercules: (above) "Mons Calpe" e.g. the Rock of Gibraltar seen from Algeciras; (below) "Mons Abyla" today Jebel Musa in Morocco (seen from Tarifa)

At the narrowest part of the Straits, there are mountains placed to form barriers to the entrance on either side, Abyla in Africa, and Calpe in Europe, the boundaries formerly of the labours of Hercules. Hence it is that the inhabitants have called them the Columns of that god; they also believe that they were dug through by him; upon which the sea, which was before excluded, gained admission, and so changed the face of nature.
Pliny - Natural History - Book 3 1:4
I (Ulysses) and my companions, were old, and slow, when we came to that narrow strait, where Hercules set up his pillars, to warn men from going further. I left Seville to starboard: already Ceuta was left behind on the other side. I said: 'O my brothers, who have reached the west, through a thousand dangers, do not deny the brief vigil, your senses have left to them, experience of the unpopulated world beyond the Sun. Consider your origin: you were not made to live like brutes, but to follow virtue and knowledge.' With this brief speech I made my companions so eager for the voyage, that I could hardly have restrained them, and turning the prow towards morning, we made wings of our oars for that foolish flight. (..) A tempest rose (..) and struck the prow of our ship. Three times it whirled her round, with all the ocean: at the fourth, it made the stern rise, and the prow sink, as it pleased another, till the sea closed over us.
Dante - Inferno - Canto XXVI - Prose translation by A. S. Kline
The image used as background for this page shows a modern depiction of an ancient ship crossing the Pillars of Hercules in the museum inside the castle of Tarifa. 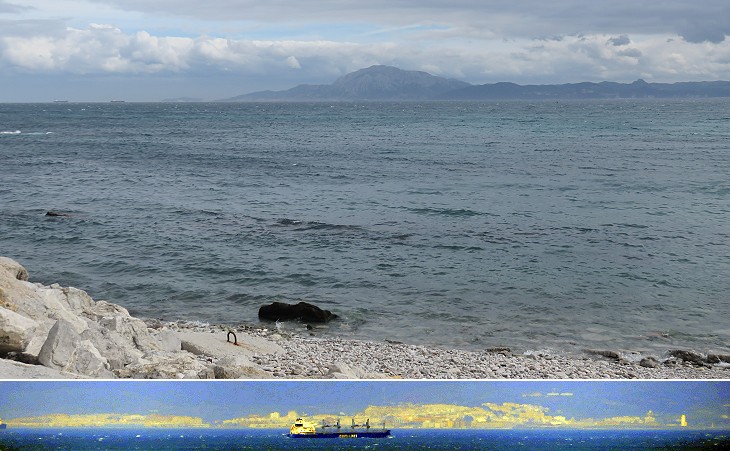 (above) The Strait of Gibraltar seen from Tarifa; (below) Tarifa seen from Tangier (enhanced contrast)

We left Cadiz on the 28th April, 1812 at day-light, and anchored at nine that evening in the Bay of Gibraltar, having gratified our national feelings about noon with a sight of Cape Trafalgar, and enjoyed by sunset a clear view of Tariffa, a neat town on a small plain by the seashore, with high mountains rising behind it: it was now partly garrisoned with English troops, and its fortifications had lately been considerably strengthened.
William Turner - Journal of a Tour in the Levant - 1820
The long, low, sandy lines of Trafalgar (Promontorium Junonis, henceforward Nelsonis) now stretch towards Tarifa; the Arabic name, Taraf-al-ghar, signifies the promontory of the cave. This cape bore about 8 m. N.E. over those hallowed waters where Nelson (..) sealed the empire of the sea with his lifeblood; for things so great can only be carried through by death: Nelson was that glorious concentration of national spirit, which made and will make every English sailor do his duty to the end of time. (..) And here let the wearied traveller repose a moment and gaze on the magnificent panorama! Africa, no land of desert sand, rises abruptly out of the sea, in a tremendous jumble, and backed by the eternal snows of the Atlas range; two continents lie before us: we have reached the extremities of the ancient world; a narrow gulf divides the lands of knowledge, liberty, and civilisation, from the untrodden regions of barbarous ignorance, of slavery, danger, and mystery. (..) The narrowest point is at Tarifa, about 12 m; the town juts out before us, and (..) the white walls of Tangiers glitter on the opposite coast.
Richard Ford - A Handbook for Travellers in Spain - 1855 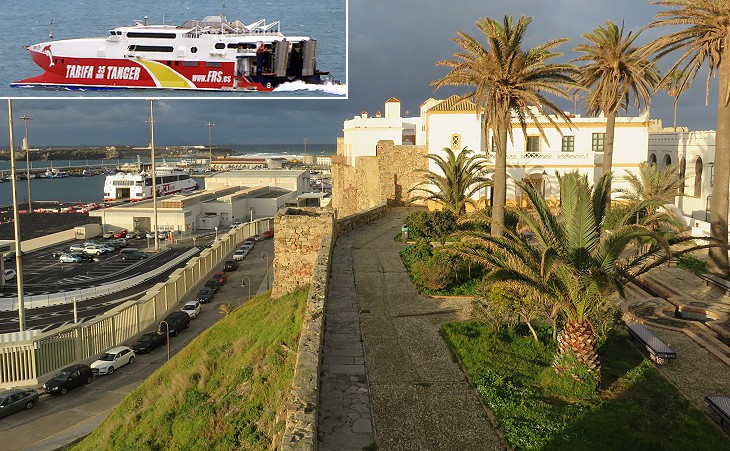 Tarifa, the most Moorish town of Andalucia - that Berberia Cristiana - was the ancient Punic city called Josa, "the Passage"; an appropriate name for this, the narrowest point of the straits: (..) the Moors called it after Tarif Ibn Malik, a Berber chief, the first to land in Spain, and quite a distinct person from Tariq (after whom Gibraltar is named). Ford
Tarif ibn Malik landed at Tarifa in 710 in a sort or reconnaissance mission which paved the way to the Muslim invasion of Spain. Today a ferry runs between Tarifa and Tangier in 35 minutes, but in the past the Moors moved from Africa to Europe via Ksar-es-Seghir (Small Castle), a protected cove right opposite Tarifa, where troops could safely embark or disembark. 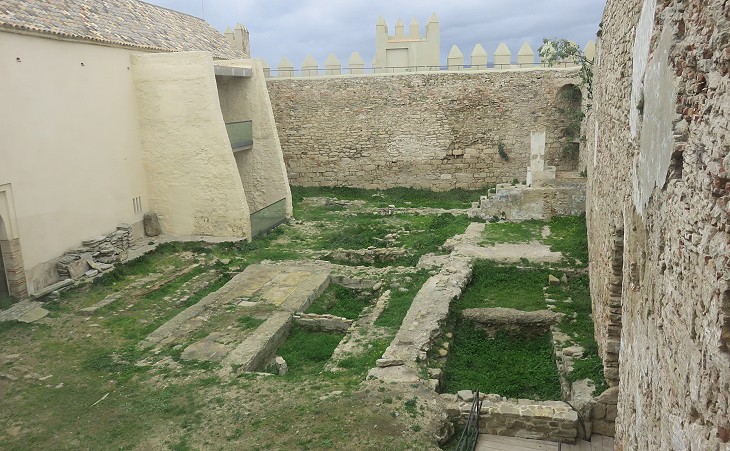 Tarifa was fortified by the Umayyad Caliphs of Cordoba to prevent attacks from rival Muslim leaders in Morocco and Tunisia. You may wish to see the towers they built in the introductory page. For many centuries the control over the Strait of Gibraltar was in Muslim hands and for a period the European side of the Strait was a possession of the Almoravid and Almohad dynasties. In the XIIth century the Muslim maritime hegemony began to subside owing to the development of war fleets at Pisa, Genoa, Marseille and Barcelona. 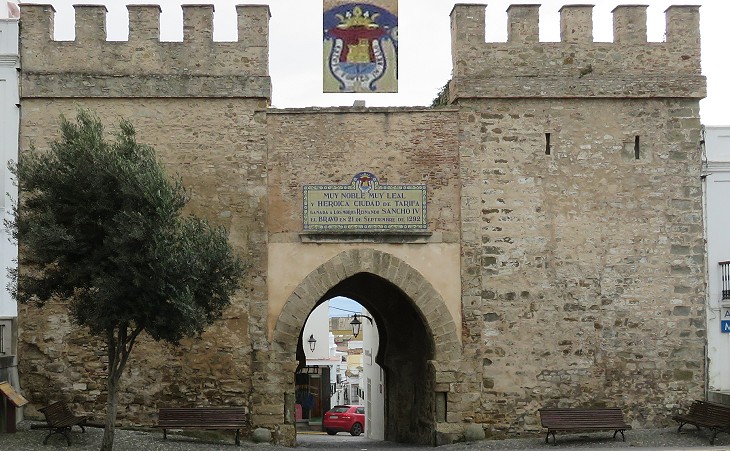 Tarifa bears for arms its castle on waves, with a key at the window; and the motto, "Sed Fuertes en la Guerra" (Be Gallant in Fight). Like Calais, it was once a frontier key of great importance. Sancho el Bravo took it in 1292. Ford
Tarifa fell in Christian hands when it was a possession of the Marinid Sultans of Morocco; this occurred after a long siege which was supported by a fleet which had reached the Strait from northern Spain and blocked supplies to the town by sea. Tarifa was conquered on the Feast of St. Matthew who for this reason became the patron saint of the town. According to Muslim chronicles King Sancho was supported in his campaign by Muhammad II, Emir of Granada, on the understanding that the town would be traded to Granada, but Sancho reneged on the promise. 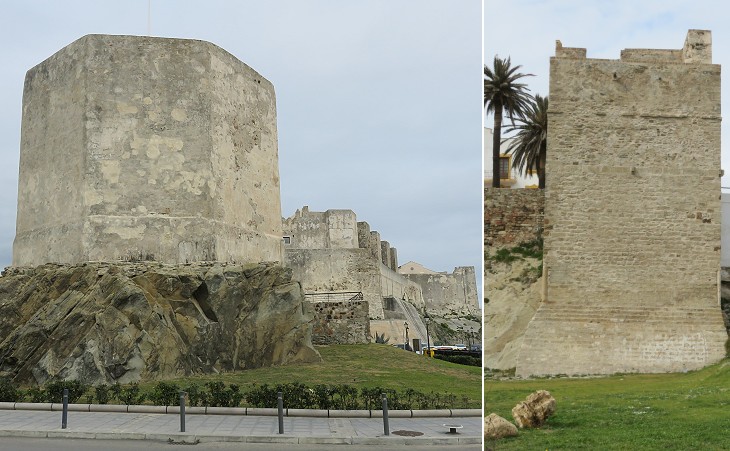 In 1292 Alonso Perez de Guzman, as all others declined, offered to hold this post of danger for a year. The Moors beleaguered it, aided by the Infante Juan, a traitor brother of Sancho's, to whom Alonso's eldest son, aged 9, had been entrusted previously as a page. Juan now brought the boy under the walls, and threatened to kill him if his father would not surrender the place. Alonso drew his dagger and threw it down, exclaiming, "I prefer honour without a son, to a son with dishonour." He retired, and the Prince caused the child to be put to death. A cry of horror ran through the Spanish battlements: Alonso rushed forth, beheld his son's body, and returning to his childless mother, calmly observed, "I feared that the infidel had gained the city". Sancho the King likened him to Abraham, from this parental sacrifice, and honoured him with the "canting" name "El Bueno" The Good. He became the founder of the princely Dukes of Medina Sidonia. (..) The site of the child's murder is marked by a more modern tower - called La Torre de Guzman. Ford 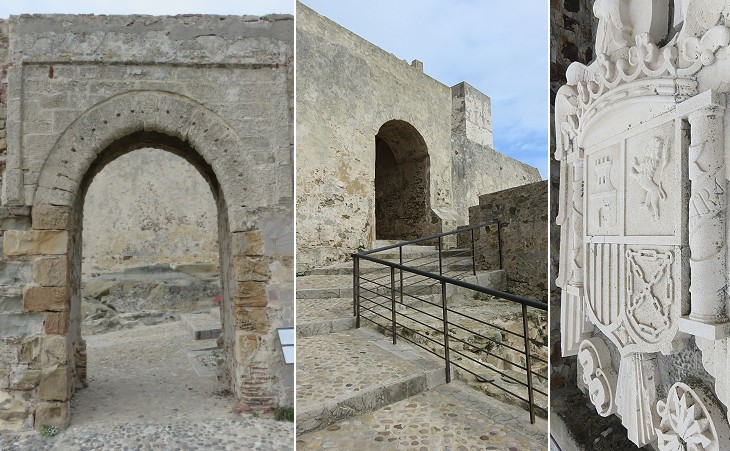 Tarifa lies in a plain often steeped in blood, and now watered by the brackish Salado. (..) Here the chivalrous Alonso XI (Oct. 28, 1340) overthrew the united forces of Yusuf I Abu-l-Hajaj, King of Granada, and of Abu-l-Hassan, King of Fez, who made a desperate and last attempt to reinvade and reconquer Spain. This victory paved the way for the final triumph of the Cross, as the Moors never recovered the blow. Ford
Alonso XI, King of Castile, was greatly helped in this campaign by the Portuguese, in particular by their fleet which was developed by a Genoese admiral. Eventually the Portuguese launched a series of attacks on the ports of Morocco: in 1458 they conquered Ksar-es-Seghir and in 1471 Tangier. The Kings of Castile conquered Gibraltar in 1462. 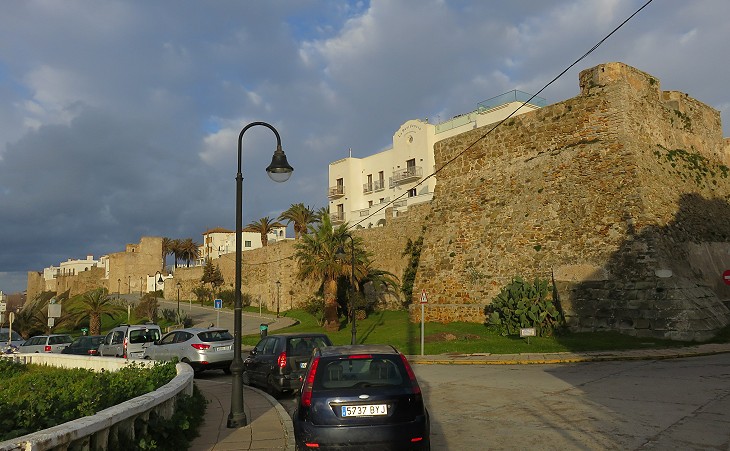 Southern walls and Guzman Castle at their end

Tarifa, is nearly quadrangular; the narrow and tortuous streets are enclosed by Moorish walls. The Alameda (street lined with trees) runs under the S. range between the town and the sea: the Alcazar (Guzman Castle), (..) lies to the E., just within the walls, and is now the abode of galley slaves. (..) The crumbling walls of Tarifa might be battered with its oranges, which although the smallest, are beyond comparison the sweetest in Spain, but defended by brave men, they have defied the ball and bomb. Ford
Ford had in mind also the sieges of Tarifa in 1810 and 1811 in which Spanish and British troops were able to withstand attacks by the French. 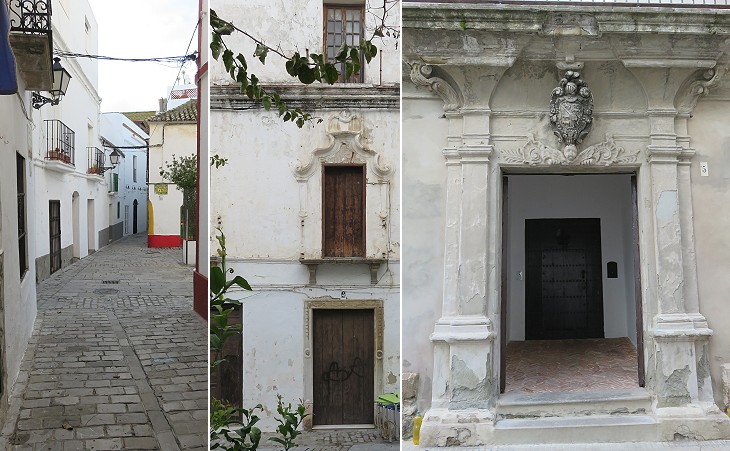 Today Tarifa is mainly known for its beaches which attract windsurfers and kitesurfers because of their unique wind conditions. Facilities for tourists are outside the old town, which especially in the off-season has a very sleepy atmosphere. 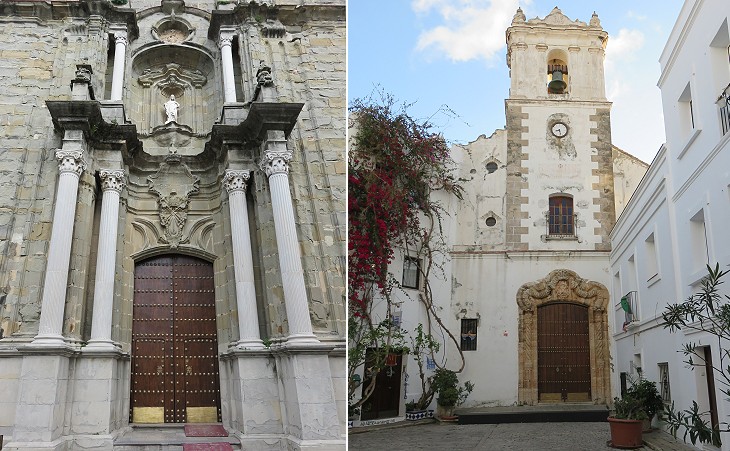