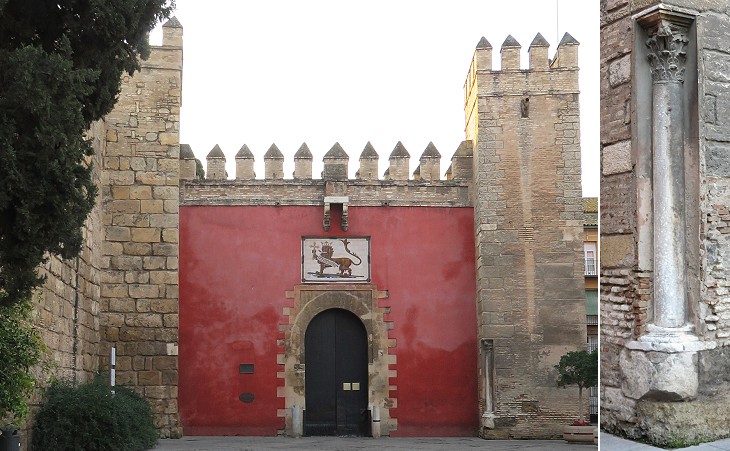 I arrived yesterday morning in this capital of Andalusia; and as soon as we had dined and dressed ourselves, walked out with no particular object in view, but merely to stroll through the streets, by way of making ourselves acquainted with the city; chance led us into the court of the Alcazar, or royal palace. (..) Near the western entrance was formerly to be seen a stone seat, with its canopy supported by four pillars, all now destroyed. Here that severe judge, Don Pedro (Peter, King of Castile and Leon in 1350-1369), sat to decide causes, and give sentence upon malefactors. His justice was so very inflexible, that in those days of feudal anarchy, it was looked upon in the light of wanton cruelty and tyranny; perhaps that unfortunate monarch owes to the hatred of those he meant to reduce to order, much of the obloquy which has been so plentifully bestowed upon him by historians, who have painted him to us as a tyrant so bloody, so wicked, as almost to exceed the bounds of probability. In Andalusia, where he fixed his residence, and seemed most to delight, his memory is not held in the same abhorrence. The Sevillian writers speak of him very differently; and instead of his usual appellation of Pedro el Cruel, distinguish him by that of El Justicero.
Henry Swinburne - Travels through Spain in the Years 1775 and 1776 in which several monuments of Roman and Moorish architecture are illustrated.
Now visit the Alcazar. The Alcazar is entered by two gates, either bv that de las Banderas where the colours are hoisted when the king is residing, or by that de la Monteria (after "monteros" beaters, who had their quarters near the gate) from whence he sallied forth to the chase.
Richard Ford - A Handbook for Travellers in Spain - 1855 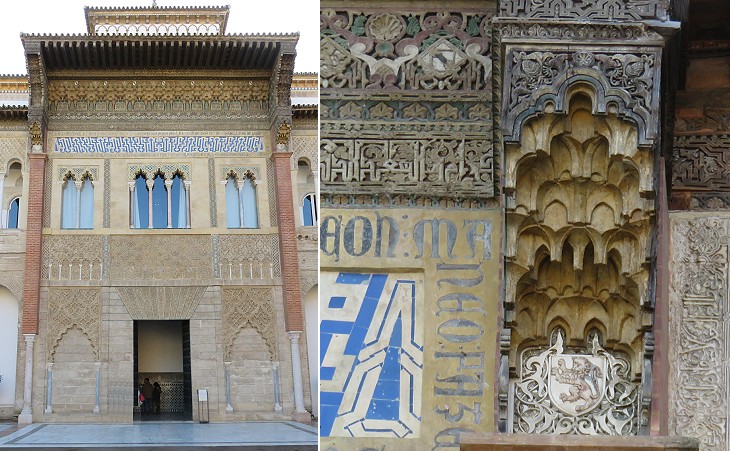 The grand portal is apparently Moorish, yet it was built by Don Pedro the Cruel, the great restorer of this palace. At this period the elaborate Oriental decorations of the Alhambra were just completed by Yusuf I; and Pedro, who was frequently on the best terms with the Moors of Granada, desirous of adopting that style, employed Moorish workmen. (..) The royal residence, occupies the site of that of the Roman praetor; it was rebuilt in the 10th and 11th centuries, by Jalubi, a Toledan architect, for Prince Abdul-rahman Anna'ssir Lidin- Allah (the defender of the religion of God) (i.e. Caliph Abd-al-Rahman III). Ford 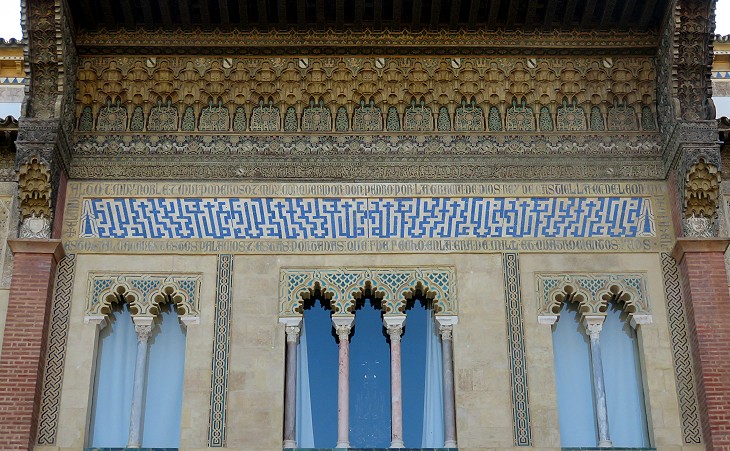 Palace of Don Pedro: loggia and inscription above the entrance

Having read that the Moors built one part of this palace, I concluded I was admiring something as old as the Mahometan kings of Seville; but upon closer examination was not a little surprised to find lions, castles, and other armorial ensigns of Castile and Leon, interwoven with the Arabesque foliages; and still more so, to see, in large Gothic characters, an inscription informing me, that these edifices were built in the fourteenth century, by the most mighty king of Castile and Leon, Don Pedro. Swinburne
Observe the delicate arabesques, the pillar-divided windows, and the carved soffit. The quaint Gothic inscription almost looks like Cufic; it runs thus "El muy alto, y muy noble, y muy poderoso, y conquistador Don Pedro, por la gracia de Dios, Rey de Castilla y de Leon, mando facer estos alcazares y estas facadas que fue fecho en la era mil quatro cientos y dos" that is, a.p. 1364. Ford
In the XIVth century the Spaniards counted the years from 38 BC, the date which was regarded as the establishment of Roman rule in Spain. A similar usage can be noticed in other parts of the Roman Empire, e.g. at Caesarea Philippi (Banias) in the Golan Heights. 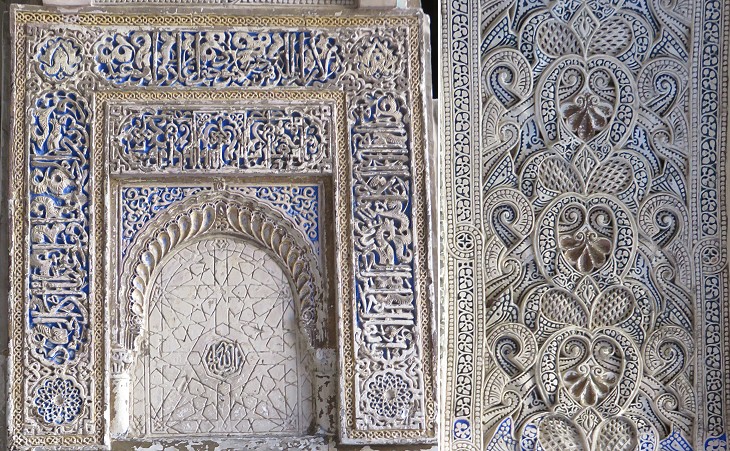 On our first entrance into the palace, which is a pastiche of Saracenic, Conventual, and Grecian architecture, I was much taken with the principal front of the inner-court; a piece of as good Morisco work as any I had yet seen. Within this portico is a court ninety-three feet by sixty-nine: it is flagged with marble, and surrounded with a colonnade of white marble columns of the Corinthian order, elegantly proportioned, and well executed; the walls behind are covered with grotesque designs in the Moorish taste. (..) Next to the court of the lions, in the Alhambra, this square is the most pleasing piece of Arabic building I have met with, though in delicacy of design and execution, the ornaments of the Sevillian are much inferior to those of the Granadine palace. Swinburne 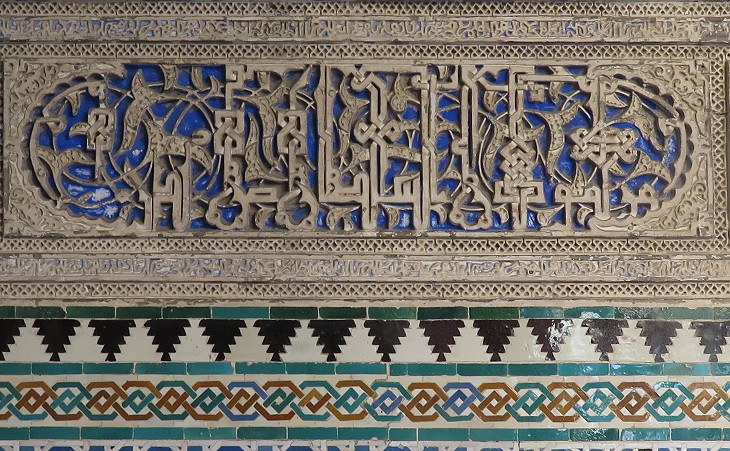 Patio de las Doncellas: wall decoration (another detail is shown in the image used as background for this page)

The grand Patio is superb. It was modernised in 1569. (..) This Alcazar was barbarously whitewashed in 1813, when much of the delicate painting and gilding was obliterated; considerable and creditable restorations were begun by Juan Manuel Arjona in 1830, and carried on by the Infanta (Isabel II, Queen of Spain in 1833-1868) during her residence here. Ford 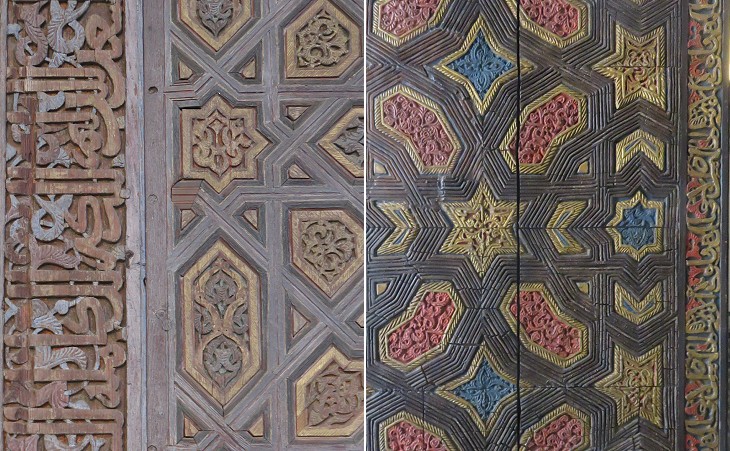 Many of the doors, ceilings, and Azulejos (tin-glazed tiles) are the genuine Moorish ones; the oldest portion fronts the garden. Ford
The patio is named after a legendary account saying that the Emirs of Seville were entitled to receive 100 maidens from the Christian States every year. 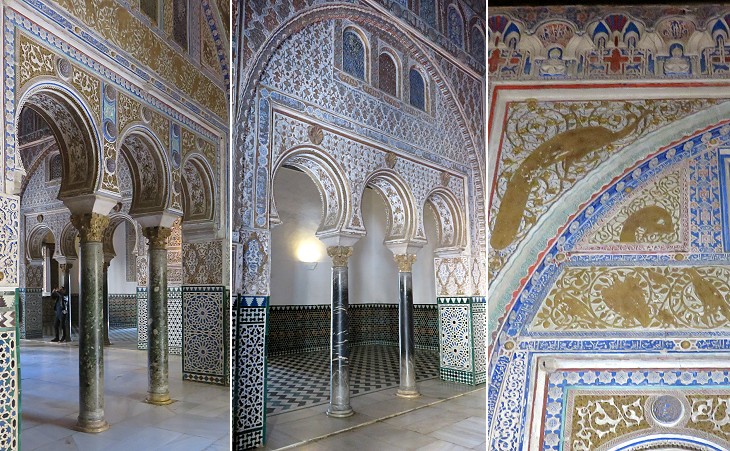 The great hall adjoining, called the Media Naranja, or half-orange from the form of its cupola, is richly gilt and stuccoed in the same manner. Here I own my little knowledge of architecture was fairly nonplussed; I was convinced that the portion of the fabric, called by the travel-writers the Moorjlo part, was the work of Peter the Cruel, who might easily procure skilful artists from the kings of Granada, with whom he was connected most part of his reign; but there was no accounting for the Corinthian pillars, unless I supposed them to have belonged to some Roman edifice, destroyed for the sake of supplying materials for the palace, or to have been placed by the emperor under the old gallery, in lieu of others in a barbarous style or ruinous state. Swinburne Don Pedro began by repairing the whole of the western side, and his painted ceilings still remain. (..) The hall of ambassadors has a glorious Media naranja roof. Ford
The dome of this hall which was used for the most important ceremonies was designed by Diego Ruiz in 1427. Wooden ceilings in mudéjar style are known as artesonado and were popular well into the XVIIth century (see that at the Aljaferia of Zaragoza in the introductory page). 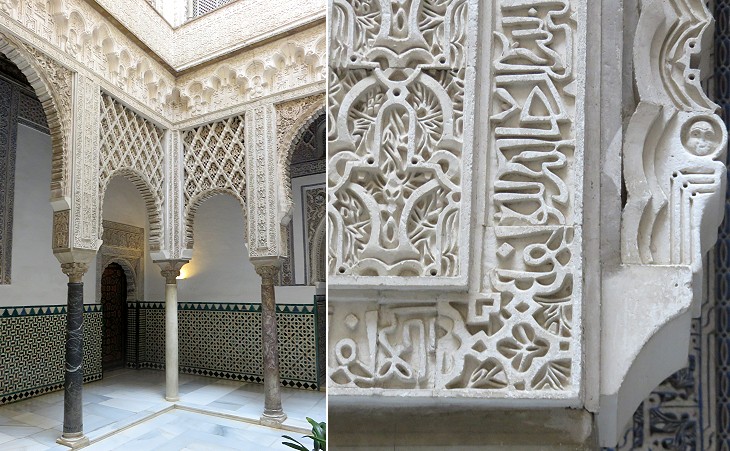 Visit the pretty puppet Patio de las Munecas and the adjoining saloons, which have been restored. Ford
This patio is in the private part of the Alcazar, the oldest one which is believed to have been built by the Caliphs of Cordoba. Its plasterwork and tile decoration was largely remade in the XIXth century.
You may wish to see Zisa, a palace in Palermo which was designed by Arab architects for the King of Sicily. 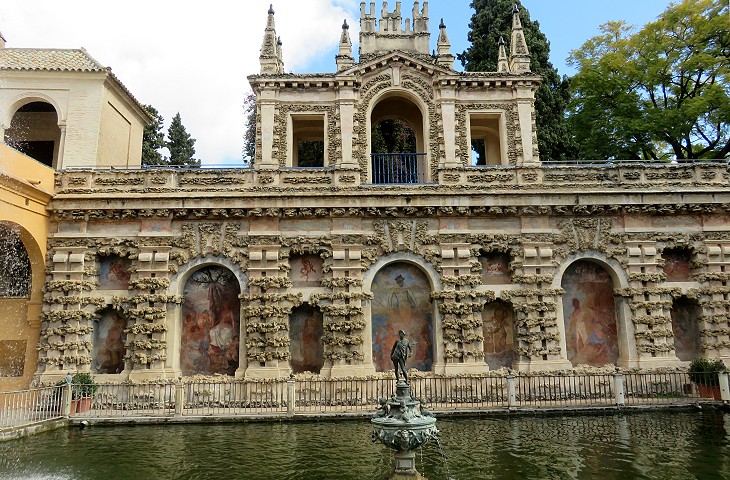 Estanque de Mercurio and Galeria del Grutesco which was designed in 1612 by Vermondo Resta, an Italian architect. It brings to mind the "Teatro delle Acque" which decorated Papal villas at Frascati

You have often heard me launch out in praise of some hanging-gardens in Italy, so refreshing and voluptuous in the summer evenings; this of the Alcazar is exactly such another; several parterres, surrounded by galleries and terraces, intersected by myrtle hedges and jasmine bowers, and perfumed by clumps of orange-trees, have also the advantage of abundance of water. A large party of sprightly damsels and young men that were walking here were much indebted to us for making the water-works play, by means of a small gratuity to the keeper. Nothing can be more delicious than these sprinklings in a hot day; all the flowers seemed to acquire new vigour; the odours, exhaled from the orange, citron, and lemon trees, grew more poignant, more balsamic, and the company ten times more alive than they were: it was a true April shower. (..) 'Tis a most heavenly residence in spring; and I should think the summer heats might be tempered and rendered supportable enough, by the profusion of water which Seville enjoys. Philip the Fifth resided here many years towards the end of his life, and passed his time in drawing with the smoke of a candle on deal boards, or angling for tench in a little reservoir, by torch light. Swinburne
Now visit the cinque-cento gardens, laid out by Charles V; they are among the most curious in Europe. Ford 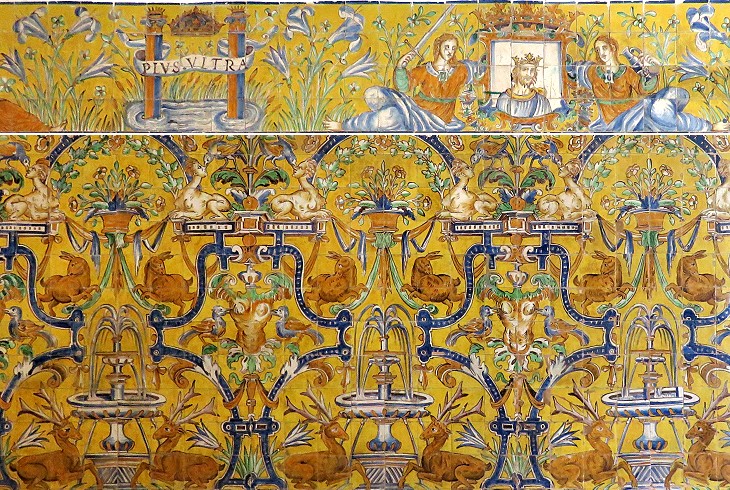 Charles V was here married to Isabella of Portugal. Ford
Charles V has contrived to hoist his eagle and his "Plus Ultra" into every corner. Swinburne
The beautiful tile decoration of this hall was made in 1577 at the request of King Philip II as a tribute to his parents. Plus Ultra (Further Beyond) meant that Charles' empire spanned beyond the Pillars of Hercules (the Strait of Gibraltar) which were symbolized by two columns. The motto was suggested to the then young prince in 1516 by his Italian adviser and physician Luigi Marliano (see Plus Ultra in monuments at Messina and Palermo in Sicily). 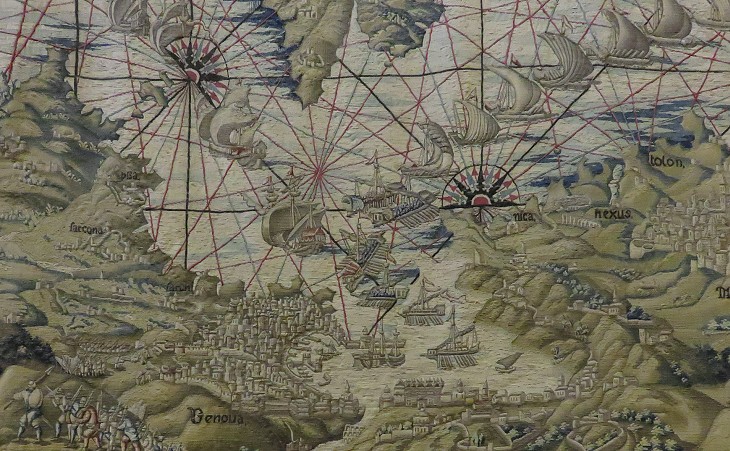 Apartments of Charles V: Flemish tapestry showing the Genoese fleet moving to Barcelona from where it escorted the Emperor to the conquest of Tunis

Historians record five wars between Charles V and the Kings of France; the Emperor's armies defeated the French ones in many battles, but because they occurred between Christians, they did not bring Charles the same glory as his conquest of Tunis in 1535. The event was celebrated as a major triumph of the Christian faith and Charles crossed Sicily and southern Italy on his way to Rome where he was crowned as an ancient Roman commander. The expedition to Tunis was made possible by the support of the Genoese fleet. It was depicted in a series of Brussels tapestries which were made in 1554. The Low Countries were one of the many possessions of Charles V. 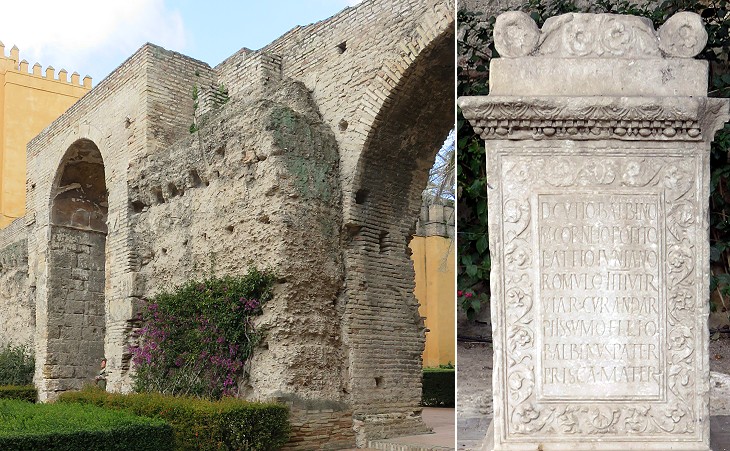 It appears that the Romans were not so negligent as the Spaniards in taking care of the roads and highways although they used no post coaches. For the administration of persons who had been consuls and pro consuls was employed to keep the public paths clean and neat. In the garden of the Duke of Medina was found a pedestal of white marble with flowered borders on which a statue had once stood with letters inscribed as follows "D CVRTIO BALBINO M CORNELIO POTITO L A TTIO IVILIANO ROMVLO IIII VIR ViAR CVRANDAR PIISSIMO FILIO BALBINVS PATER PRISCA MATER". Hence it seems that Curtius Balbinus was one of the four commissioners of roads at that time.
Frank Hall Standish - Seville and its Vicinity - 1840

Move to Roman Seville, Moorish Seville or Mudéjar Monuments or return to the introductory page.