- Italica: Houses and Mosaics
(left - Mosaic at Italica; right - decoration at the Alcazar of Seville)

You may wish to see an introductory page to this section or a page on the Monuments of Italica first. 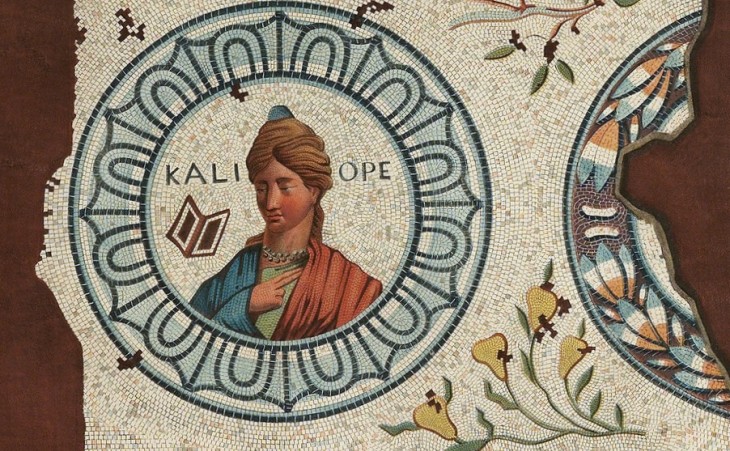 On Dec. 12, 1799, a fine mosaic pavement was discovered, which a poor monk, named Jose Moscoso, to his honour, enclosed with a wall, in order to save it from the usual fate in Spain. Didot, in 1802, published for Laborde a splendid folio, with engravings and description. (..) Now this work is all that remains, for the soldiers of M. Soult (a French general who plundered many works of art in Andalusia, especially paintings by Murillo, in 1810) converted the enclosure into a goat-pen.
Richard Ford - A Handbook for Travellers in Spain - 1855 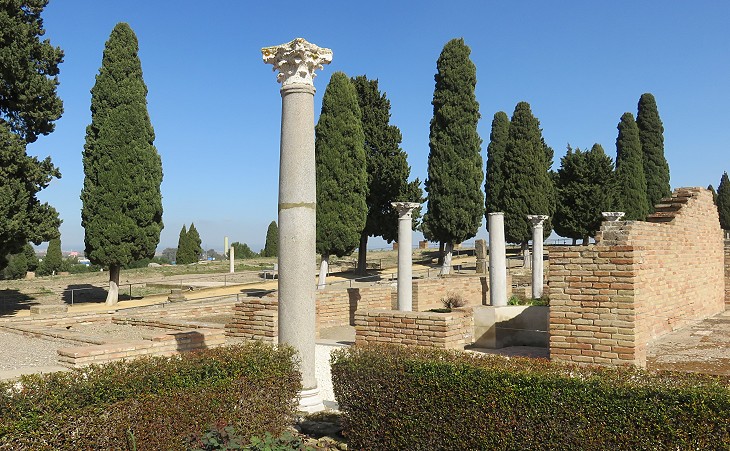 Neigbourhood of the Houses: in the foreground House of the Birds

At the beginning of the XXth century Spanish archaeologists began excavations near the amphitheatre and they identified a neighbourhood of rich houses. The walls of the houses were almost entirely lost, but many decorated floors had withstood the ravages of time. The image used as background for this page shows a detail of a geometric floor mosaic based on pelta, the shield of the Amazons, in one of the houses. 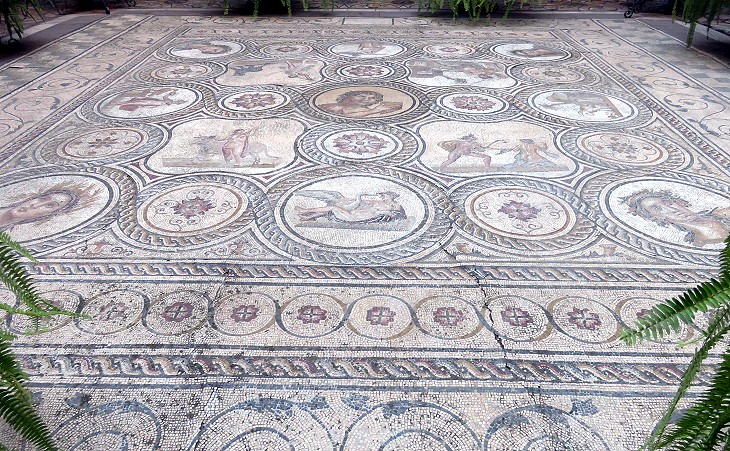 Seville: Palacio de la Condesa de Lebrija: courtyard with the Mosaic of the Loves of Zeus aka Mosaic of Pan

The news about the findings at Italica led Regla Manjón, Countess of Lebrija, to corrupt the guards at the archaeological site in order to get hold of a large floor mosaic with which she decorated her palace at Seville. Rodrigo Amador de los Ríos, who was in charge of the excavations, vainly confronted the countess to get the mosaic back. She was so influential in political circles that the archaeologist was threatened with firing. In 1912 the site of Italica was declared National Monument in order to protect it from further spoliation. 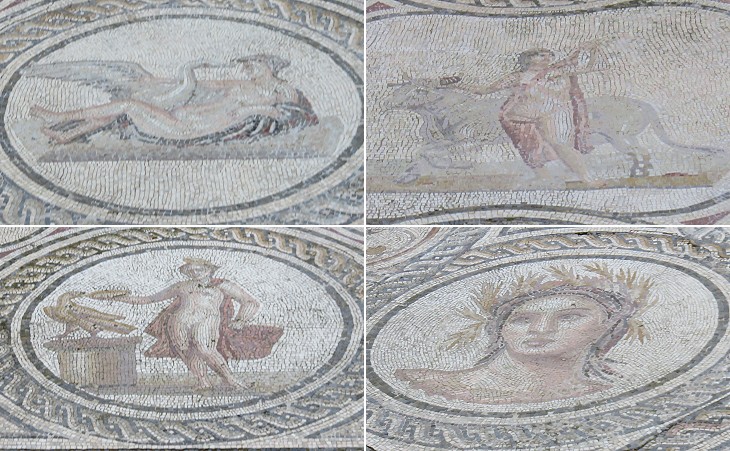 The Roman Empire created an unprecedentedly extensive market, functioning with a reliable single currency in conditions of exceptional peace and minimal brigandage. This was good not only for business but also for the business of forging and spreading culture.
Peter Garnsey and Richard Saller - The Roman Empire: Economy Society and Culture - Bloomsbury 2014
Works of art depicting the same mythological subjects have been found at the four corners of the Empire. These subjects were made popular by the Metamorphoses of Ovid, a poem written at the time of Emperor Augustus in which more than 250 Greek myths are described in a light and amusing manner. 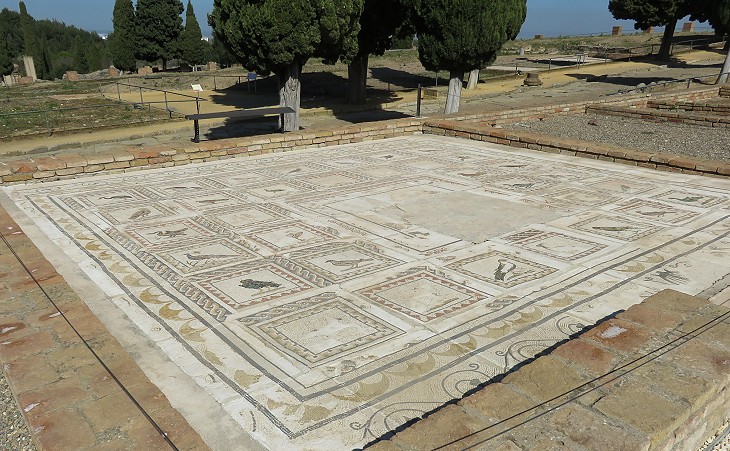 House of the Birds: floor mosaic after which the house is named

The similarities of subjects were not limited to mythological tales. Other ancient Roman houses were named by archaeologists after floor mosaics depicting many different birds e.g. at Carthage in Africa and at Caesarea Maritima in Asia. The floor mosaics of this and of the other houses constitute the main reason for visiting Italica. 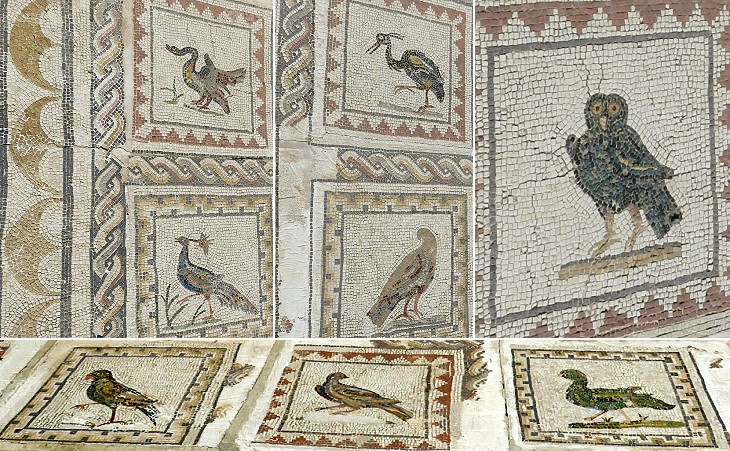 Thirty-three frames containing the image of a different bird are arranged around a central larger square frame which contained another (lost) piece of mosaic. It might have depicted Orpheus taming the animals, another popular subject across the whole empire. During the Renaissance frescoes depicting birds decorated Roman villas (e.g. Studiolo del Cardinale at Villa Medici) and palaces (e.g. Palazzo Altemps). 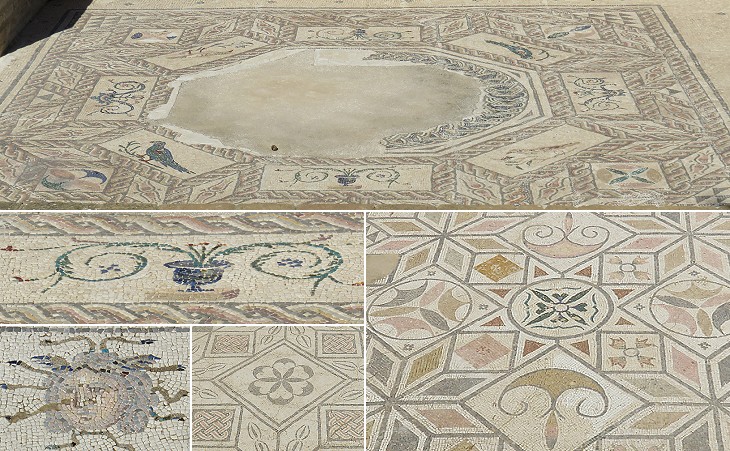 House of the Birds: other floor mosaics showing birds, geometric patterns and a Gorgon

The House of the Birds is among the largest ones at Italica and it has been dated early IInd century AD when Emperor Hadrian promoted the development of the town where he was born. The many halls and rooms of this house had very fine floor mosaics of a different design. The small head of a Gorgon had an apotropaic purpose, i.e. to chase evil spirits. 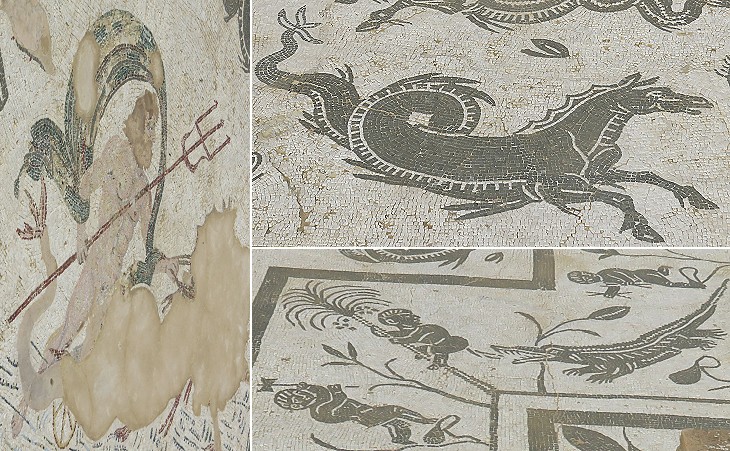 House of Neptune: details of the floor mosaic which decorates the "frigidarium" of small baths

The landlords of this house, or perhaps a building similar to Edificio de la Exedra, enjoyed the use of small private baths (see an image in the introductory page). The floor mosaic of the cold room is very interesting because different techniques/styles were employed in its design. It is basically a black and white mosaic which calls to mind those at Terme di Nettuno at Ostia. The image of Neptune riding a chariot drawn by seahorses, however, is a coloured one and it resembles that in a famous mosaic at the Museum of Bardo in Tunis. A sort of strip across the floor depicts amusing scenes of pygmies fighting crocodiles in the Nile, as at Porto or at a villa on the Aventine Hill in Rome. 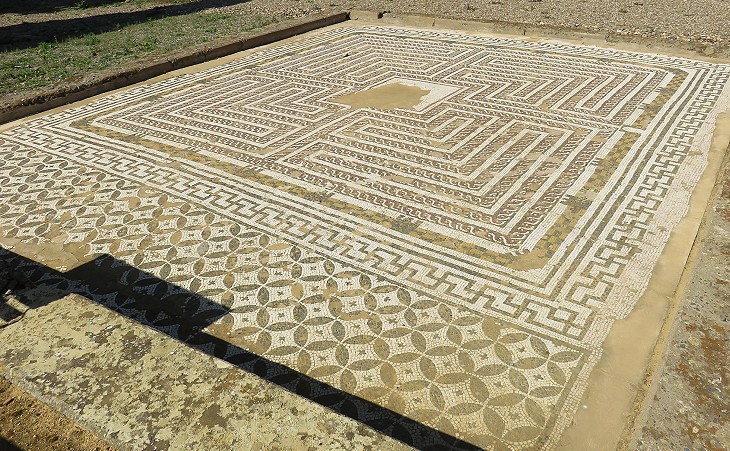 House of Neptune: Hall of the Labyrinth

The Labyrinth, the maze at Knossos where Theseus slew the Minotaur was a popular decorative motif. The central image is lost, but it might have been that which can be seen in a mosaic at Thuburbo Maius. In this particular mosaic the Labyrinth is surrounded by a wall with towers which has only one gate. In order to reach the central square one has to go through all the passages of the four quadrants. Have a try! (it opens in another window). 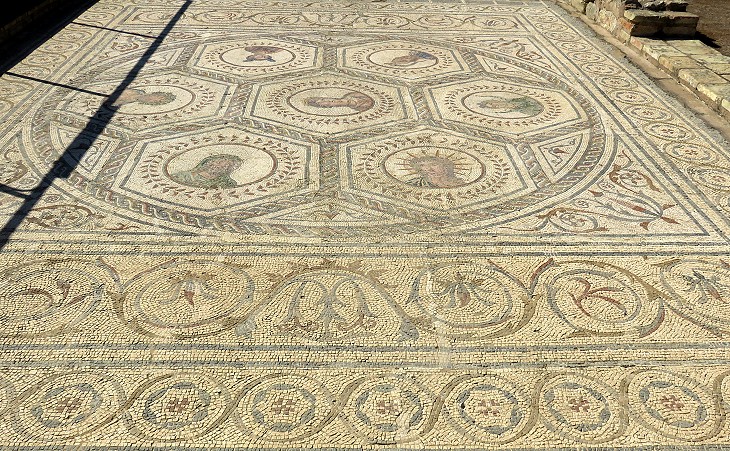 House of the Planetarium

This large house was built in the early IInd century, but it was redesigned and split into smaller properties at a later time. It is named after one of the floor mosaics of the original building which portrays (inside medallions) Venus surrounded by Saturn, the Sun, the Moon, Mars, Mercury and Jupiter, i.e. the gods who were associated to the seven celestial bodies closest to the Earth. It is not a very usual subject, the Zodiac being more frequently chosen by those who had an interest in astronomy (as in the synagogues at Bet Alpha and Sepphoris in Israel). A relief carved on a ceiling of the Temple of Bel at Palmyra has a layout very similar to the mosaic at Italica, but Bel/Jupiter is placed in the central medallion, rather than Venus. 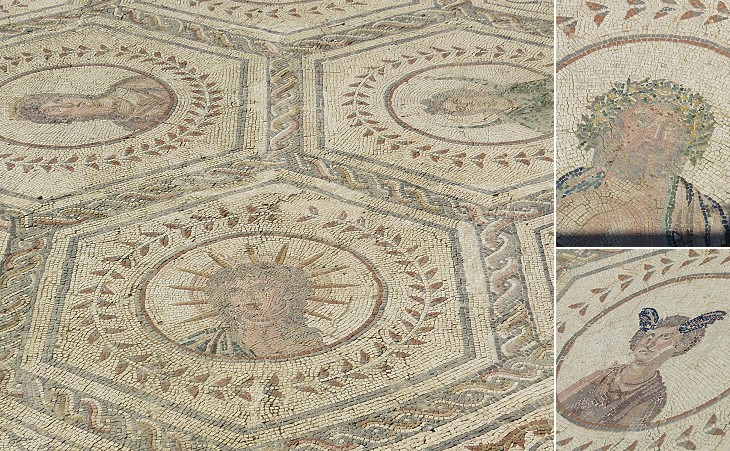 House of the Planetarium: (left) Venus, the Sun and the Moon; (right) Jupiter (above) and Mercury (below)

The concept of week is associated with a lunar calendar as it roughly corresponds to the duration of a lunar phase. It was first developed in the Jewish and Mesopotamic cultures. It then spread to Greece and Egypt. The Romans did not have weeks, but nundinae, i.e. market days which occurred every eight days, but at the time of Emperor Augustus they began to adopt the week and they associated each day with one of the celestial bodies. The latter were associated also with the seven grades of the Mithraic cults, as shown at Mitreo di Felicissimo at Ostia. 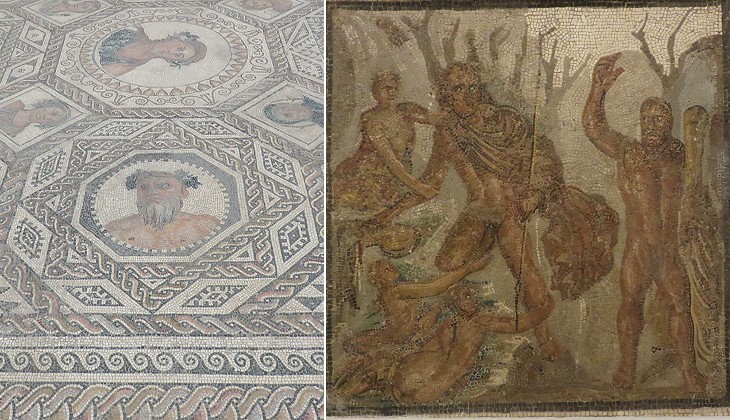 Modern archaeologists endeavour to keep the mosaics in place, but in the past they were usually moved to a museum and placed on a wall, rather than on a floor. The Archaeological Museum of Seville houses a number of fine mosaics which were discovered in the early XXth century. 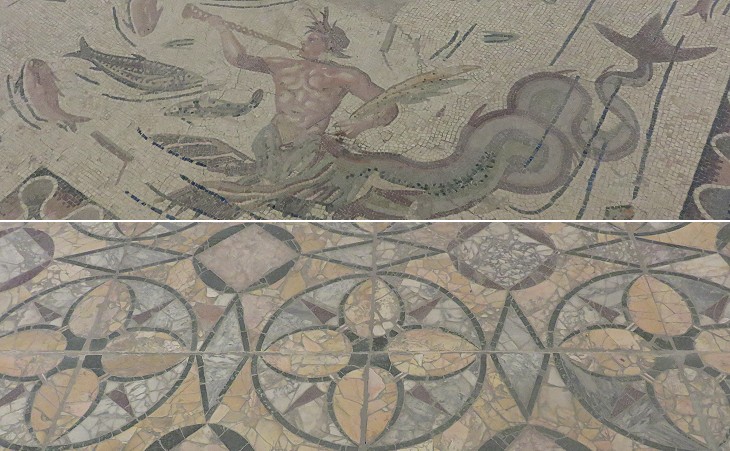 Archaeological Museum of Seville: exhibits from Italica: (above) mosaic depicting a triton from a pool; (below) "opus sectile" geometric decoration

Return to the Monuments of Italica or to the introductory page.