Immediately behind the town, and towering high over the whole scene, rise the bold and perpendicular masses of the Jebel ez Zaghwan. One day, mounted on mules, we started for the purpose of ascending to the summit of this mountain, the Zeugitantis mons of antiquity: we rode along its base (..) then we commenced ascending; and, after two hours, reached a plateau. (..) Here we left our mules, and commenced ascending the loftiest peak, which we found a most laborious and scrambling undertaking; but, reaching the summit, we were amply repaid for our fatigue by the magnificent view which presented itself.
Sir Grenville Temple - Excursions in the Mediterranean - 1835 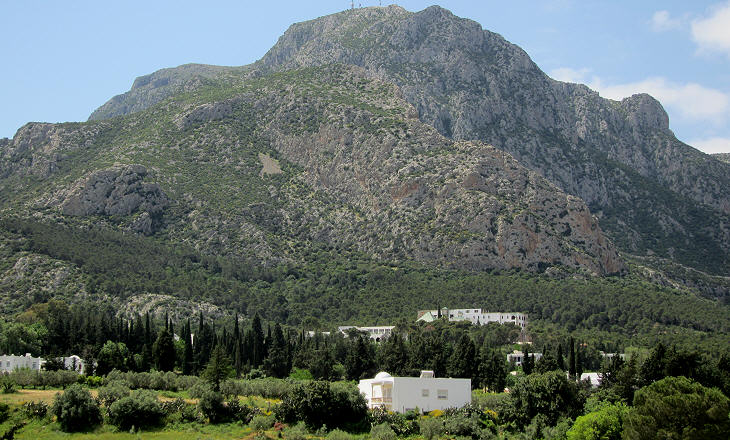 Until the beginning of the XIXth century the region surrounding Tunis was known in Europe as Zeugitania, a reference to the division of the Province of Africa into Proconsularis Zeugitana and Valeria Byzacena which was implemented by Emperor Diocletian in 285-292.
The western limit of Proconsularis Zeugitana was probably placed at Sicca Veneria, near the border with today's Algeria while to the east the province ended at Djebel Zaghouan, an isolated mountain which stands at the end of a plain south of Tunis and which is an obvious landmark as it is visible from a great distance. The mountain most likely gave its name to the new province. 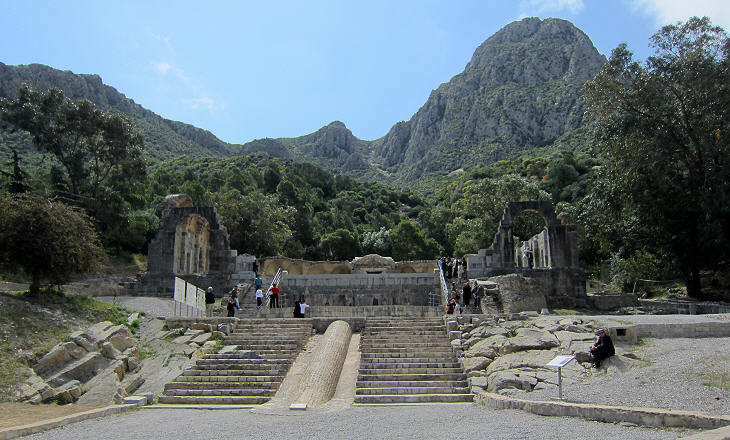 On the following day we went to visit the Kazbah as the ancient temple over the fountain which supplied Carthage with water by means of the aqueduct, is called. It stands at the base of the rocky part of the Jebel Zaghwan, but considerably elevated above the plain, and about two miles from the town. Temple
When Emperor Hadrian visited Africa in 128 he promoted the construction of a very long aqueduct from Djebel Zaghouan and another nearby location to Carthage. The emperor regarded himself as a talented architect and he might have given instructions to local authorities regarding the gigantic nymphaeum (monumental fountain) which was built at the start of the aqueduct. 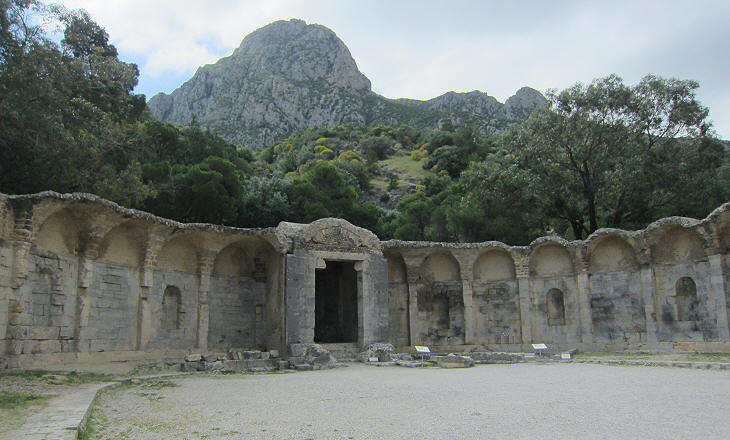 The building is extremely elegant, and in its original condition must have been one of the most charming retreats which it is possible to imagine. (..) It consists of a paved area of a semi-circular form, but with the two exterior limbs produced in straight lines as tangents. Round the perimeter was a raised colonnade, and at the end, in the middle of the circular portion, was a rectangular cella, which is still tolerably entire. The walls of this latter building are of rubble masonry, but at the extremity there is a niche lined with cut stone, surmounting what may either have been the base of a statue of an emperor or an altar to a divinity. Probably the former, as the mutilated trunk of such a statue, in white marble, and of colossal size, was actually lying on the ground outside at the time of the writer's visit; this has now disappeared. (..) Each end of the side colonnades was terminated by a handsome gateway.
1895 Murray Handbook for travellers in Algeria and Tunisia
Old guide descriptions are often a useful tool when visiting ancient monuments as they help in identifying additions/reconstructions. 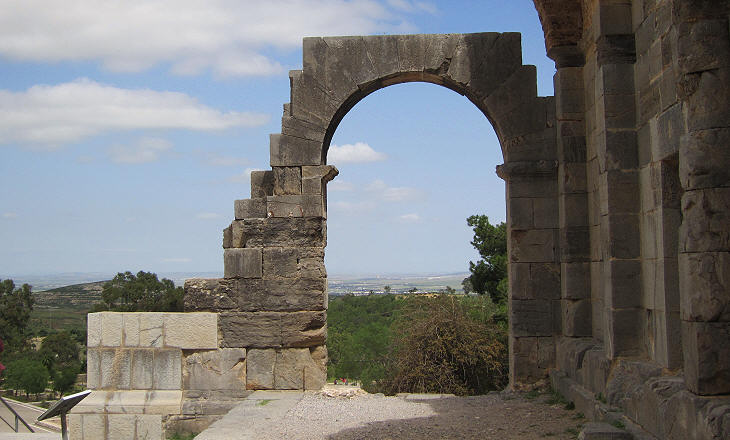 Temple of Waters: gate of one of the two side colonnades

It is certain that we have a most delightful and extensive prospect of the greatest part of the Kingdom from this eminence which might therefore be the place from whence Agathocles (late IVth century BC tyrant of Syracuse) was entertained with the view of both the country of the Adrumetines (today's Sousse) and Carthaginians.
Thomas Shaw - Travels or Observations relating to several parts of Barbary and the Levant - 1738. 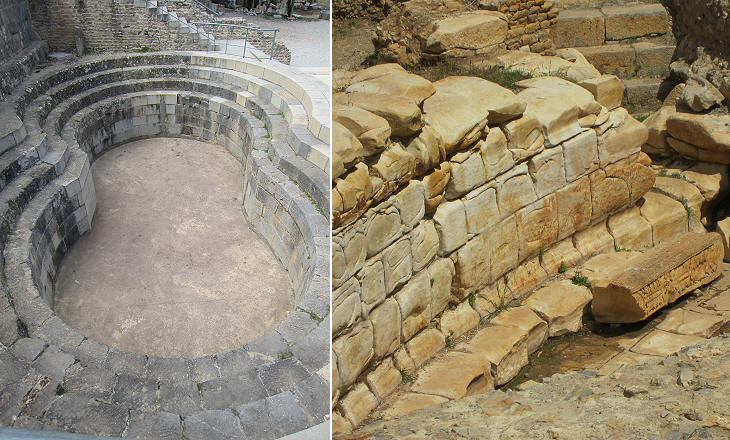 Between the two flights of steps, is the basin in which the spring bubbles up its clear water. This basin nearly resembles in shape the figure 8, and is surrounded with steps to enable the people to descend and fill their pitchers. Temple
The spring is no longer visible, being led into the modern aqueduct before it emerges from the ground. Murray
In antiquity the water of the spring was carried to a large oval pool from which it started its journey to Carthage. 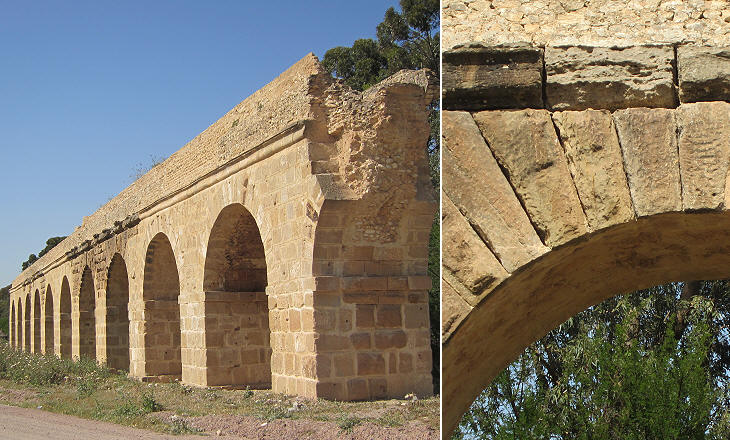 The aqueduct was restored several times by the Arabs and after them by the Ottomans to supply Tunis, rather than Carthage. It is still possible to find sections which show the stones of the Roman period. 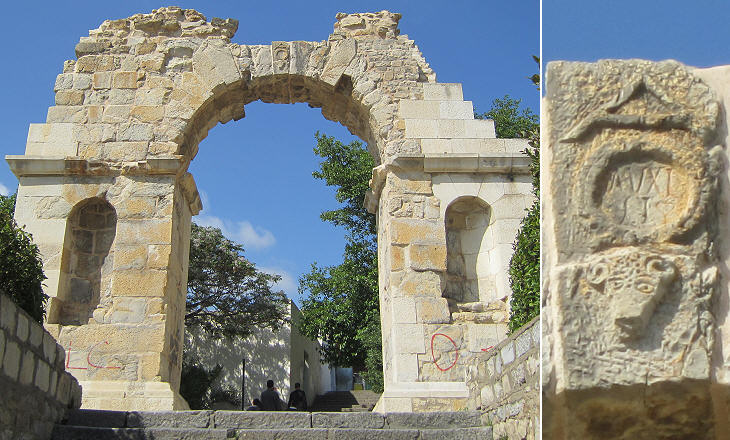 Arch of triumph and enlargement of the keystone

Upon an ancient gate there is a ram's head, armed, in basso relievo with AUXILIO, in large letters below it. This may perhaps instruct us that Ziqua was under the immediate influence and protection of Jupiter Ammon. Shaw
Today the arch has a rather modern appearance, but Shaw's account confirms that the key stone is original. Ammon was the god to whom a famous oracle was dedicated at Siwa, an oasis in Egypt, near the border with today's Libya, which was the easternmost outpost of the Berber people, the native inhabitants of north-western Africa.
After Alexander the Great asked the oracle whether he would conquer the entire world and received an affirmative answer, Ammon was associated with Zeus and Jupiter and entered the Greek and Roman pantheons (you may wish to see a better image of Jupiter Ammon at Merida in Spain).
A less elaborate theory suggests that the relief represents a capricorn's head, a symbol of Legio III Augusta, the Roman legion which was stationed in Africa, and that the gate was built by its troops. 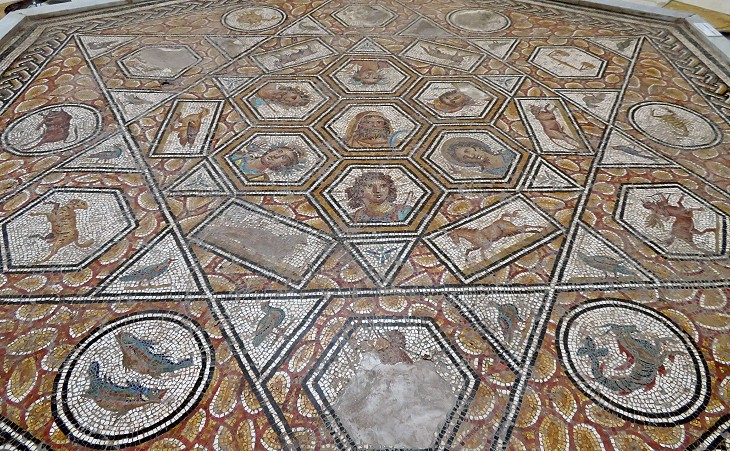 Museum of Bardo in Tunis - Room of the Treasures: Mosaic of the Zodiac and of the Days of the Week (IIIrd century AD from Bir Chana near Zaghouan)

This fine and complex floor mosaic from a Roman villa near Zaghouan was moved to the Museum of Bardo soon after it was opened in 1888 and it was given a privileged space in the former harem of the palace. At its centre Saturn (Saturday) is surrounded by the other gods representing the other days of the week. They are placed in an hexagon (similar to a mosaic at Thysdrus) which is surrounded by the twelve symbols of the Zodiac. This mosaic has attracted the interest of many archaeologists especially after mosaics depicting the Zodiac were found in ancient synagogues in Galilee at Hamat Teverya, Bet Alpha and Sepphoris. This mosaic is actually very similar to that found in the House of the Planetarium at Italica in Spain. 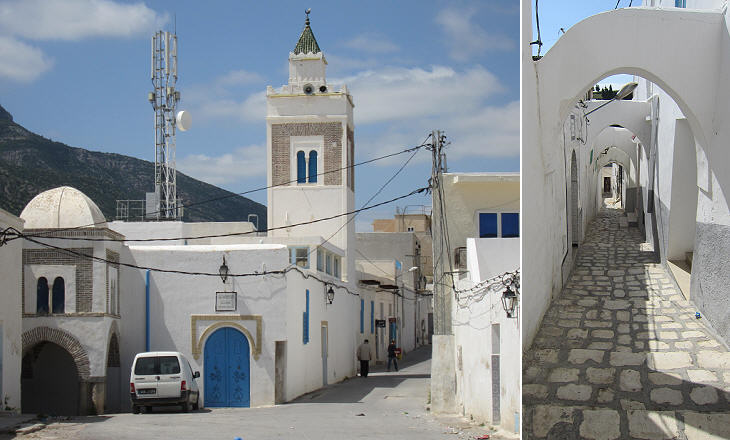 The gate is the only remaining monument of ancient Ziqua, the town situated a mile from the nymphaeum. The site was probably abandoned until the early XVIIth century when Muslims expelled from Spain settled there, similar to what occurred at Testour. They were called Andalusians, but they actually came from all regions of Spain. They were farmers and had knowledge of advanced irrigation practices which they utilized at Zaghouan. 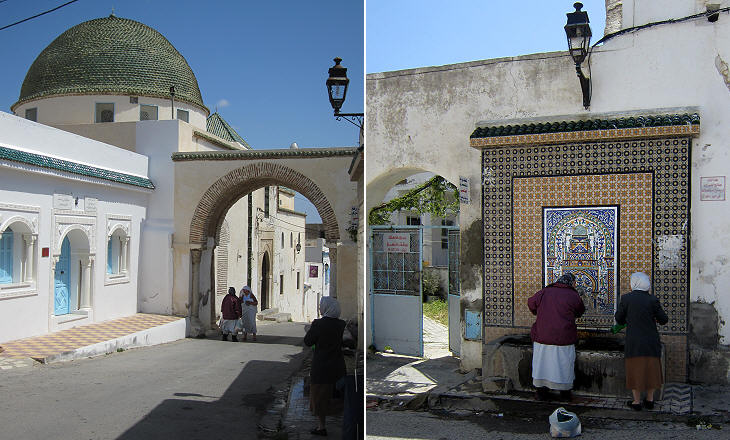 At present Zaghouan is said to contain twelve thousand inhabitants, a considerable portion of whom are employed in dying the shasheahs, or red caps of Tunis; for its waters possess the peculiar property of imparting to the colour additional brilliancy, and of preserving it longer from fading; and it is in part owing to this circumstance that these caps have so great a reputation, and that it has always been found impossible to imitate them. Grenville
Today the town has a tidy Sidi Bou Said aspect and it is a popular excursion destination for the inhabitants of Tunis. Its water is still precious as it is believed to have several beneficial effects, either drunk or used for bathing. According to tradition it increases the chance of becoming pregnant. 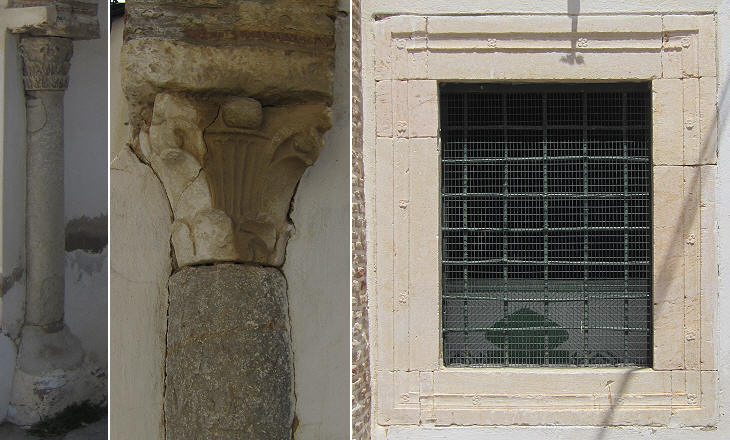