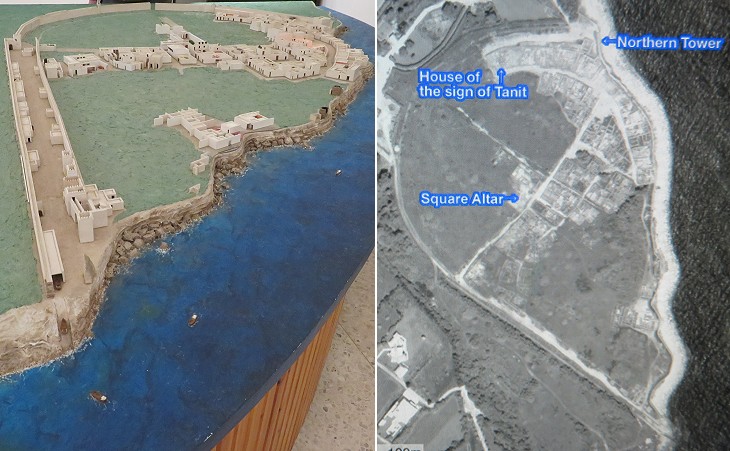 The Punic Town of Kerkuane, located at the tip of Cape Bon on a cliff that dominates the sea, bears exceptional witness to Phoenician-Punic town planning. Contrary to what took place in Carthage, Tyre or Byblos, no Roman city was built on this Phoenician city, and its port, ramparts, residential districts, shops, workshops, streets, squares, temples and necropolis clearly remain as they were in the 3rd century BC. The site of the Punic Town of Kerkuane was discovered in 1952. (..) The earliest known testimonies at the site would date back to the 6th century BC; whereas the ruins, today visible at the site, date back to the end of the 4th, first half of the 3rd century BC and bear witness to sophisticated town planning.
From the UNESCO synthesis of the universal value of Kerkouane which in 1985 was included in the World Heritage List.
The Archaeological Atlas of Tunisia published in Paris in 1893 reported the existence of a "large ancient village along a cliff" near Kerkouane, a small Arab town, but the site was not investigated until 1952. 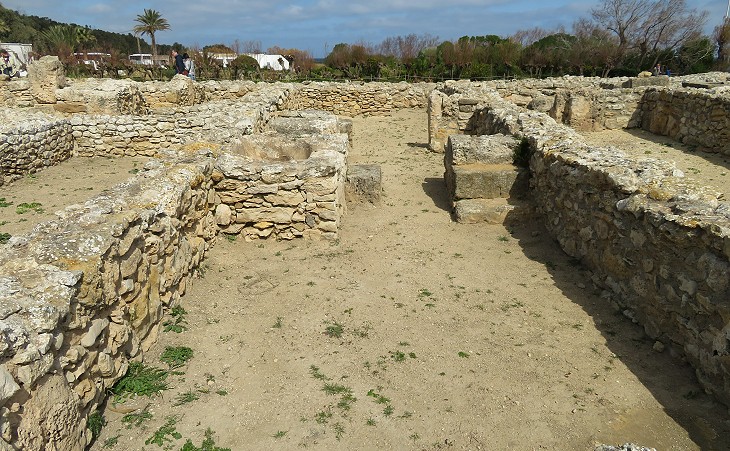 Layout of a standard house

Kerkuane is the unique known Punic city in the Mediterranean harbouring a mine of information on town planning and architecture. (..) The «punicity» of Kerkuane is perfectly reflected in the architecture, town planning, life style (it appears to have been largely city-dwellers), the socio-economic life (diversity and wealth of economic activity), as well as some religious and funerary practices. UNESCO
Each house had the shape of a long rectangle; a hall after the entrance was the public area of the building. At its end steps led to the upper storey where the bedrooms were situated, and a passage to a small courtyard which was the main source of light. The layout of the houses of Kerkuane is similar to that of those found beneath the Forum of Roman Carthage. 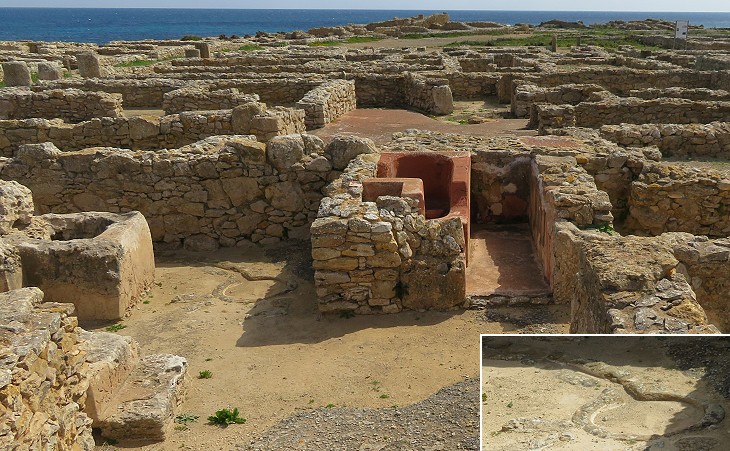 Some houses had a larger size and more complex facilities. In that of the Central Courtyard a channel for eliminating household waste into sewers in the street is very evident. The house had a well and a waterproof basin which might have been a bathtub with an adjoining small floor mosaic. 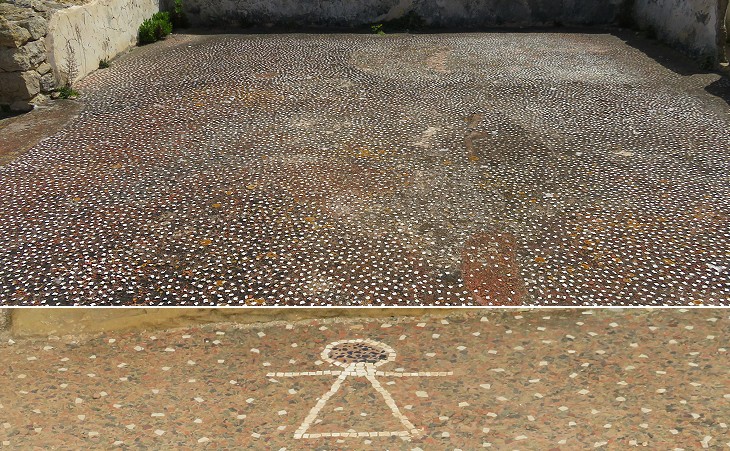 (above) Floor mosaic of a large room; (below) floor mosaic with the symbol of Tanit, a Carthaginian goddess

Cato the Elder made reference to pavimenta punica as an example of unnecessary luxury as he was a supporter of the destruction of Carthage and an advocate of simple and frugal life. The floors which were found in some of the houses of Kerkouane were made with broken terracotta jars which were mixed with small pieces of white calcareous stones. The latter were not distributed according to a pattern, with the only notable exception of a symbol of Tanit. Similar types of floors can be found at Solunto in Sicily, in origin a Carthaginian town and at Paestum in Southern Italy, where the white stones form an elaborate decoration. 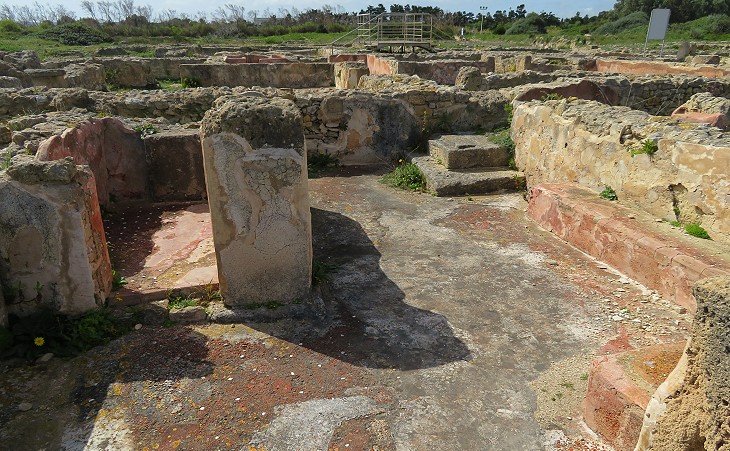 The layout of Kerkouane is not the rectangular one which we associate with ancient Greek (e.g. Priene) and Roman towns with streets forming an orthogonal grid. The majority of the houses which have been excavated are aligned along a crescent-shaped street. The main buildings are situated at the centre of the town, but not at the crossroads of main streets. Archaeologists suggest that a public bath establishment was situated in this central area. It did not have a hypocaust (heating facility), nor a natatio, a swimming pool. 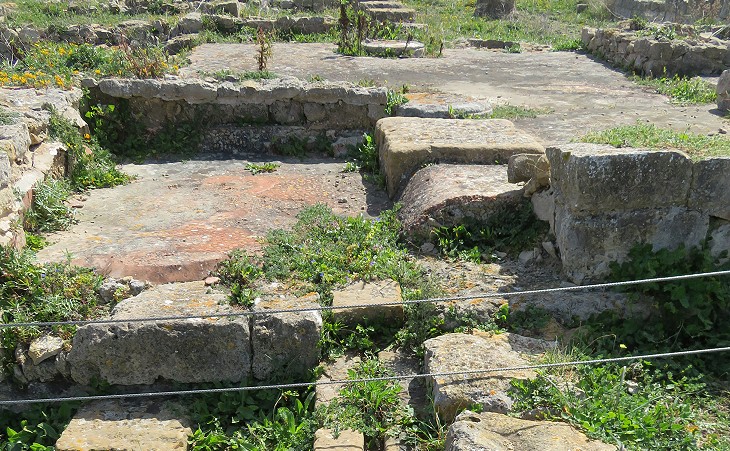 The remaining evidence of a complex building with three adjoining halls at the centre of the town is thought to have been a temple, chiefly because of a high number of animal bones, ashes and fragments of wine jars which were found there and are evidence of sacrifices. Archaeologists unearthed a podium supporting the cella with the statues of the deities. They have not been identified, but it is likely they were three. 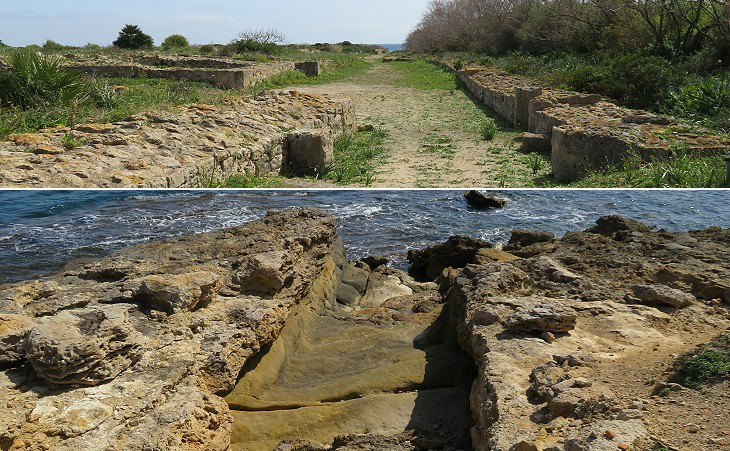 (above) Western Gate and walls on the right side of the image; (below) ramp to drag ships ashore at the southern end of the town, the only remaining evidence of its harbour facilities

In 309 BC Agathocles, tyrant of Syracuse landed at the Quarries of Ghar El Kebir, south of Kerkouane and invaded the region. The following excerpt by Diodorus Siculus shows how rich it was.
The country through which it was necessary for them to march was divided into gardens and plantations of every kind, since many streams of water were led in small channels and irrigated every part. There were also country houses one after another, constructed in luxurious fashion and covered with stucco, which gave evidence of the wealth of the people who possessed them. The farm buildings were filled with everything that was needful for enjoyment, seeing that the inhabitants in a long period of peace had stored up an abundant variety of products. Part of the land was planted with vines, and part yielded olives and was also planted thickly with other varieties of fruit-bearing trees. On each side herds of cattle and flocks of sheep pastured on the plain, and the neighbouring meadows were filled with grazing horses. In general there was a manifold prosperity in the region, since the leading Carthaginians had laid out there their private estates and with their wealth had beautified them for their enjoyment. (..) Meanwhile Agathocles, who had control of the open country, was taking the strongholds about Carthage by storm.
Diodorus Siculus - Library of History - Book XX - Loeb Edition
The passage shows also that the Carthaginians did not expect Agathocles' invasion. The walls which protected Kerkouane were not designed to sustain the attack of a large army. 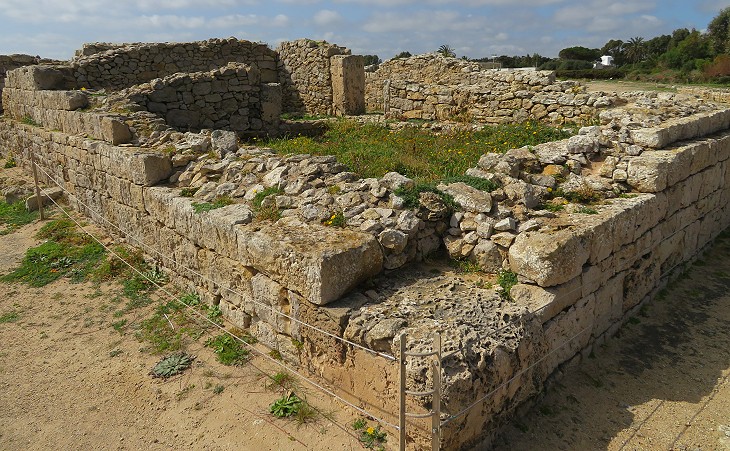 A tower with a commanding view over the sea was built after Agathocles' expedition, but most likely it was of no use when the First Punic War broke out.
The Romans (..) put to sea and sailed towards Libya, reaching the shore with their advanced ships under the promontory known as the Hermaeum (Cape Bon) which lies in front of the whole Gulf of Carthage and stretches out to sea in the direction of Sicily. Having waited there until their other ships came up, and having united their whole fleet, they sailed along the coast till they reached the city of Aspis (the Greek name of Clypea). Landing there and beaching their ships, which they surrounded with a trench and palisade, they set themselves to lay siege to the town, the garrison of which refused to surrender voluntarily. (..) The Romans, after making themselves masters of Aspis (..) hastily advanced with their whole force and set about plundering the country. As nobody tried to prevent them, they destroyed a number of handsome and luxuriously furnished dwelling-houses, possessed themselves of a quantity of cattle, and captured more than twenty thousand slaves, taking them back to their ships.
Polybius - The History - Book I - Loeb Edition
The coins which were found at Kerkouane did not include silver ones, which the Carthaginians began to mint only after they conquered parts of Spain with mines of that metal. This occurred after the end of the First Punic War in 241 BC, so archaeologists have come to the conclusion that Kerkouane was pillaged by the Romans after they conquered Aspis in 255 BC and that eventually the town was abandoned. 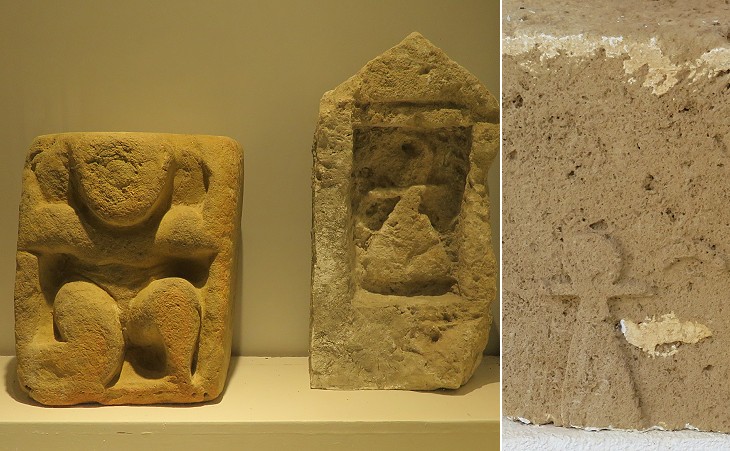 Exhibits at the Museum of Kerkouane: tombstone reliefs with the symbol of Tanit; that to the left shows a goddess having a crescent moon and the sun as head

The worship of Tanit, a moon goddess, did not end with the fall of Carthage in 146 BC. Her symbol and the association of moon crescent/solar disc can be found on many tombstone of the Roman era (e.g. at Tipasa in Algeria) during which she was associated with Juno Caelestis, as one can see at Thugga. 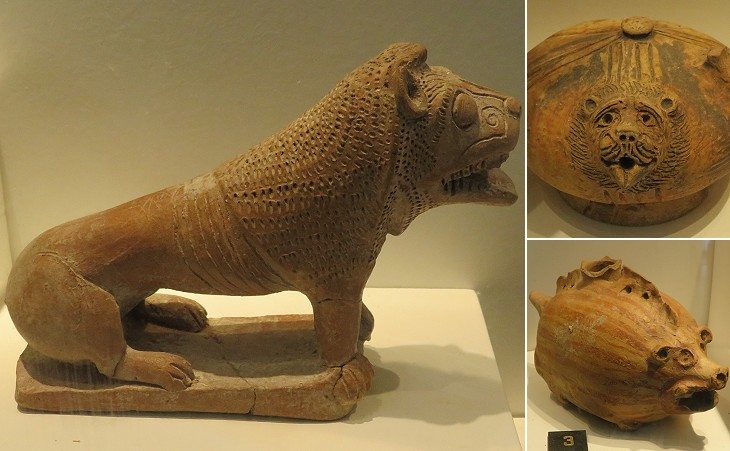 Exhibits at the Museum from the nearby necropolis

The Necropolis of Arg el Ghazouani, located on a rocky hill less than one kilometre from the town, bears invaluable witness to Punic funerary architecture of this period; it concerns the most well preserved portion of the great necropolis of Kerkuane, the tombs of which are scattered throughout the coastal hills at the tip of Cape Bon. UNESCO 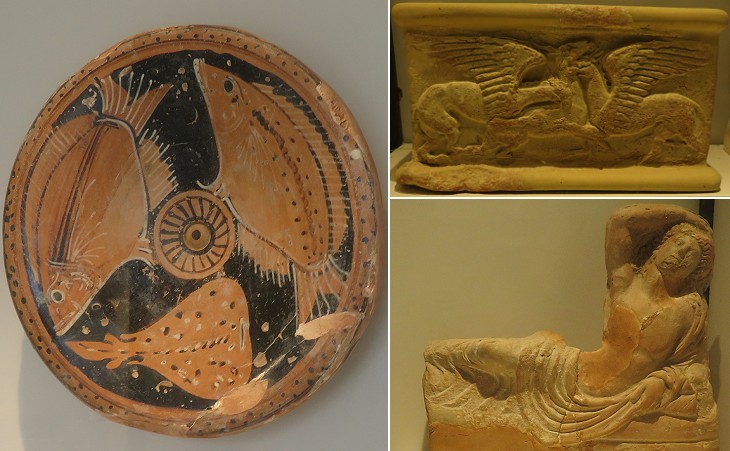 Exhibits at the Museum showing contacts with Capua (the fish dish), the Hellenistic world (griffins assaulting a doe) and the Etruscans (the cinerary urn); the image used as background for this page shows a small statue resembling those found at Paestum