The southern temples seen from the House with the Swimming Pool

Few cities have left such noble proofs of their magnificence, such monuments of their architecture (but) the private habitations of its citizens were not able to resist the dilapidations of many revolving ages.
Henry Swinburne - Travels in the Two Sicilies. 1777-1780
Archaeologists were rather surprised when they unearthed a large IIIrd century AD (or later) residential complex which run from the southern to the northern walls immediately to the west of the monumental area of Paestum. In Ostia or Pompeii shops, inns, small baths and workshops were interspersed in housing districts, but this did not occur to the same extent in Paestum. 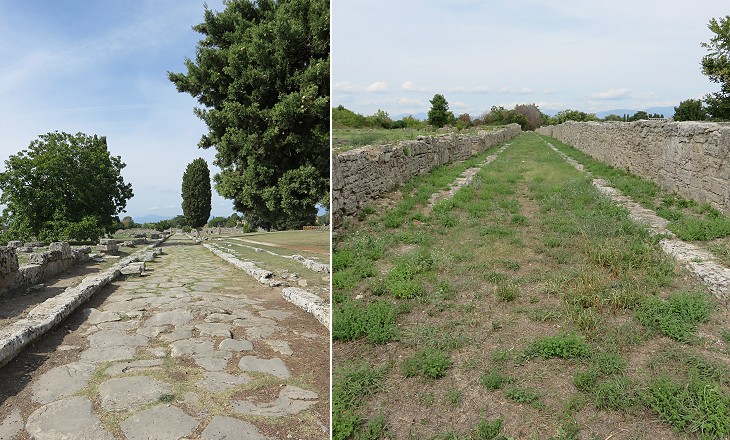 (left) Via Sacra; (right) street parallel to Via Sacra in the residential quarter

A well preserved Roman street crossing Paestum from south to north has been called Via Sacra, but Cardo Maximus (main south-north oriented street) would be a more appropriate name. Its southern section was flanked by the rear sides of the southern temples on the east and on the west by an uninterrupted row of houses. This suggests that in the late Empire, Paestum was a rather quiet place and not particularly bustling with life. The houses were built in a very orderly manner along three parallel streets. 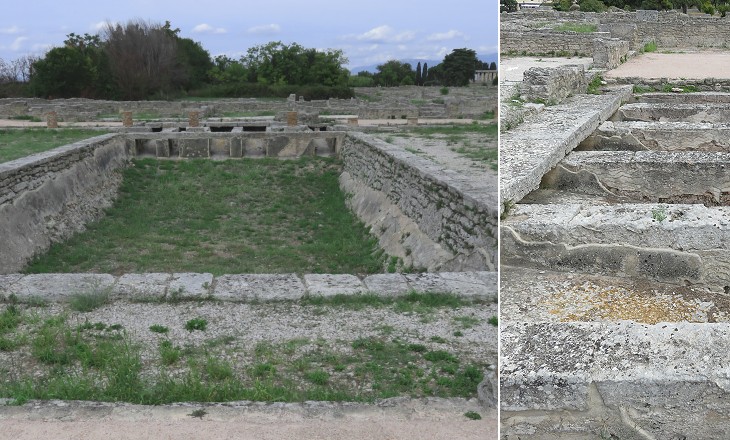 House with the Swimming Pool: (left) the pool; (right) structures at one end of the pool

When the residential quarter was designed most likely the houses had more or less the same size. Eventually one of them was greatly enlarged to the detriment of the neighbouring ones. It covers an area of 2,500 sq mt/27,000 sq ft and it is centred around a large pool. Its use for swimming is rather unlikely, although the climate of Paestum would have allowed swimming for many months of the year. 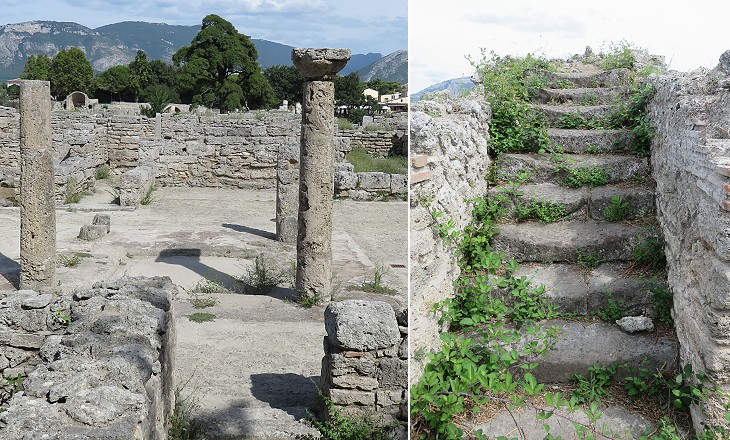 (left) "Tablinum" of a house north of the Forum; (right) steps in the House with the Swimming Pool

The tablinum was the public part of the house where the landlord received his guests and it was situated near the entrance. Rainwater was collected in the impluvium and stored in an underground cistern, but over time the impluvium became just a decorative element of the tablinum.
The houses or at least most of them had an upper storey. 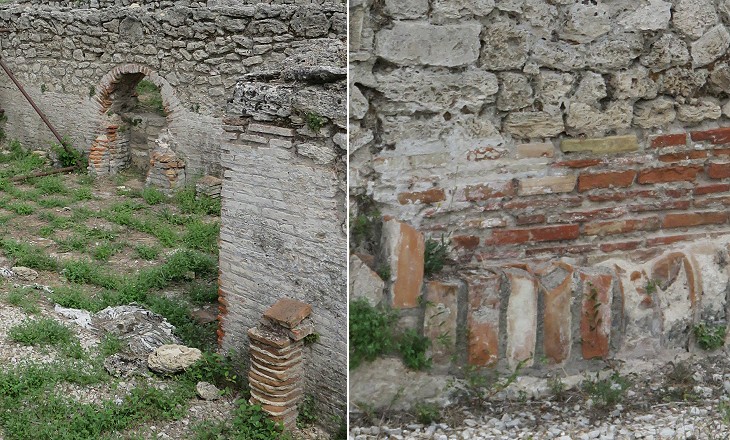 Hot rooms of the House with Termal Baths

Scanty remains of public baths have been identified along Via Sacra opposite the residential quarter. The wealthy inhabitants of some houses however did not need to cross the street to go to the baths as they had them at home. The walls and the vaults of these private establishments have disappeared, but their existence is proved by the finding of underground furnaces, low brick pillars which supported a heated floor and wall flues for the circulation of hot air. 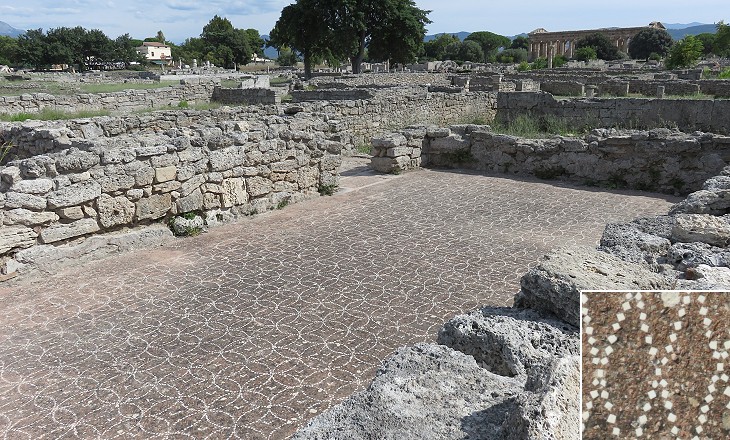 Floor of a house north of the Forum; (inset) detail of the floor of another room

What is there that human industry will not devise? Even broken pottery has been utilized; it being found that, beaten to powder, and tempered with lime, it becomes more solid and durable than other substances of a similar nature; forming the cement known as the "Signine" composition, so extensively employed for even making the pavements of houses.
Pliny the Elder - Historia Naturalis - Book XXXV:46 (translation by John Bostock and Henry T. Riley)
The Romans widely employed geometric black and white mosaics for the floors of their houses (e.g. in Villa Adriana), but this type of decoration was perhaps too expensive for the landlords of Paestum. They opted for a cheaper material, but did not forego its decoration. The image used as background for this page shows another floor with a Greek key pattern design. Similar floors can be seen in Herculaneum, in Solunto in Sicily, in the Punic town of Kerkouane in Tunisia, in Italica in Spain and in other provincial towns. 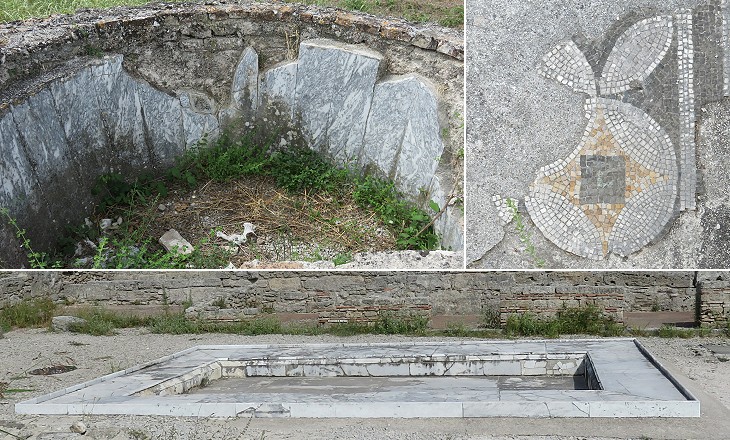 (above-left) Marble decoration of fountain; (above-right) fragment of a floor mosaic; (below) House of the Marble Impluvium

The use of marbles was widespread in the Roman Empire especially in the IInd century AD, but archaeologists have found very limited evidence of them at Paestum, a fact which with many others indicate that the town had lost its former importance and wealth.

Move to:
The Walls
The Temples
Other Monuments
The Museum