Musti (El Krib)
(detail of the theatre at Thugga)

Below Tubersoke (today's Teboursouk, near Thugga) is Musti where we have the remains of a beautiful triumphal arch; and upon a stone that might formerly belong to it there is the following inscription: "Invictissimo Felicissimoque Imperatori Augusto Caesari Orbis Pacatori Musticensium D(ecreto) D(ecurionum) P(ecunia) P(ublica)".
Thomas Shaw - Travels or Observations relating to several parts of Barbary and the Levant - 1738 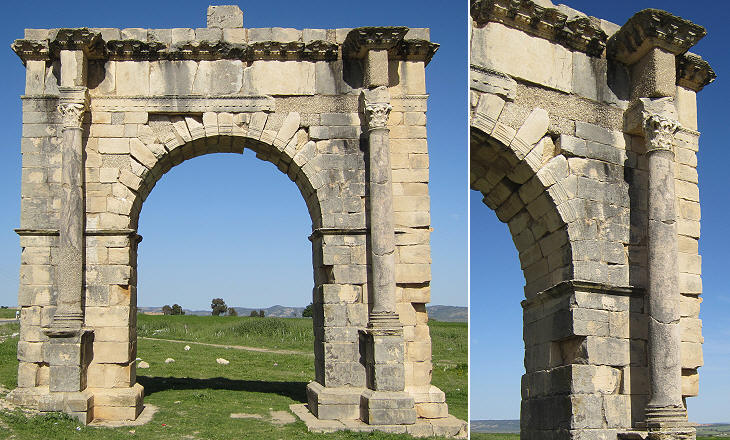 Arch to Emperor Gordian I (reconstructed in 1968)

Although the ruins of ancient Musti (aka Mustis) were already identified in the early XVIIIth century they were and are almost neglected. The 1895 Murray Handbook did not mention the town and nor do most of today's guidebooks. Thus travellers en route to El-Kef (Sicca Veneria) are caught by surprise when they see a reconstructed arch to the left of the road.
The arch marked the eastern entrance to the town. The inscription quoted by Shaw made reference to Emperor Tiberius, but the arch was built in 238 AD and it was dedicated to Gordian I who was emperor for only thirty-six days.

You may wish to see other triumphal arches in Africa: at Mactaris, Pheradi Majus, Sufetula and Thugga in Tunisia, at Cuicul and Thamugadi in Algeria, at Volubilis in Morocco and at Oea (Tripoli) and Leptis Magna in Libya. 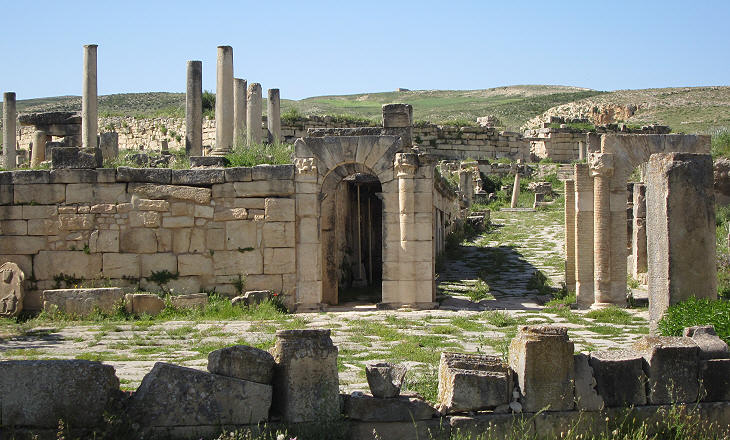 Market road leading to the Forum

Marius, the Roman general who defeated Jugurtha, the Numidian king who attempted to oust the Romans from Africa, settled some of his veterans at Musti which was redesigned according to usual Roman patterns. Its covered market was built with a local white calcareous stone which adds to the beauty of its columns and arches. Musti was already a municipium (a town with self-government bodies) at the time of Emperor Augustus because its population included many Roman citizens. 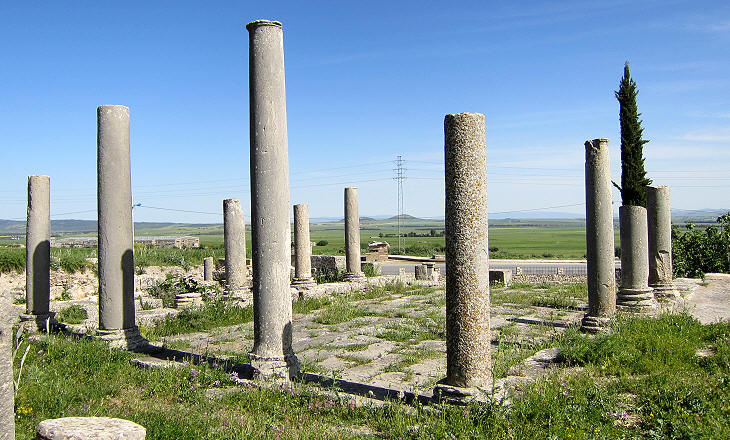 The economy of Musti relied on grain farming and one of the largest temples found by archaeologists in the centre of the town was dedicated to Ceres, the Roman goddess of agriculture and grain crops. This goddess was very important until the IInd century AD, when her cult declined in favour of eastern fertility goddesses.
The photo shows the modern road behind the temple which links Tunis to El-Kef. At Musti it follows the route of the Roman one between Carthage and Theveste. 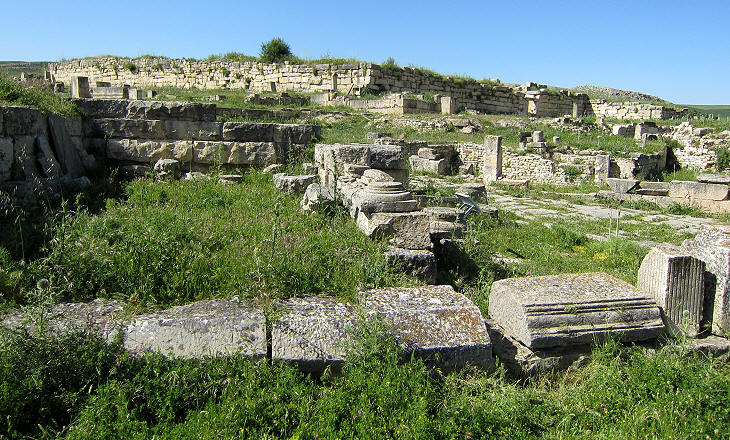 Usually temples to Pluto are associated with the underworld, but the Pluto worshipped at Musti was the protector of seeds and the epithet Urceus was a reference to a jar (It. orcio) of unlimited capacity, so he was the male counterpart of Ceres. The temple was decorated with statues and marbles at the time of Emperor Hadrian. 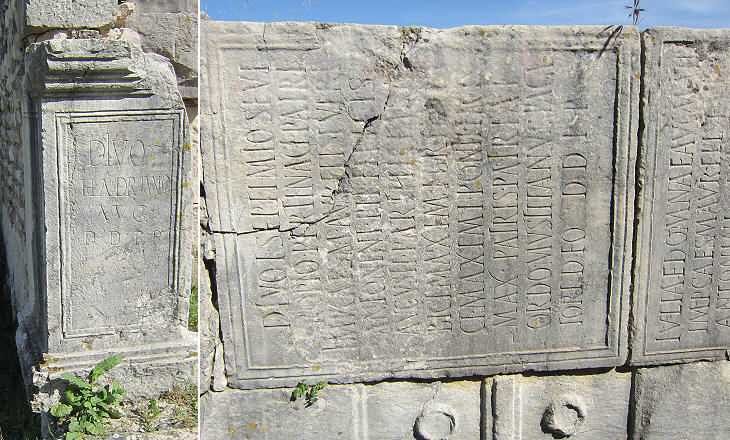 After the Byzantine conquest of the Province of Africa at the time of Emperor Justinian the fora of several towns were turned into small fortresses.
(The fora) had been the heart of the classical city and could be reached from every part of the urban area. When transformed into fortresses, they were often large enough to accommodate soldiers, and potentially to serve as an emergency refuge for inhabitants.
From Changing Townscapes in North Africa from Late Antiquity to the Arab Conquest by Anna Leone.
It appears that at Musti some of the stones used for the fortifying the forum came from buildings which had been destroyed by the Vandals in the Vth century or during campaigns for the eradication of non-Christian beliefs. You may wish to see a large Byzantine fortress at Thignica, not far from Musti, with walls full of ancient inscriptions from other buildings. 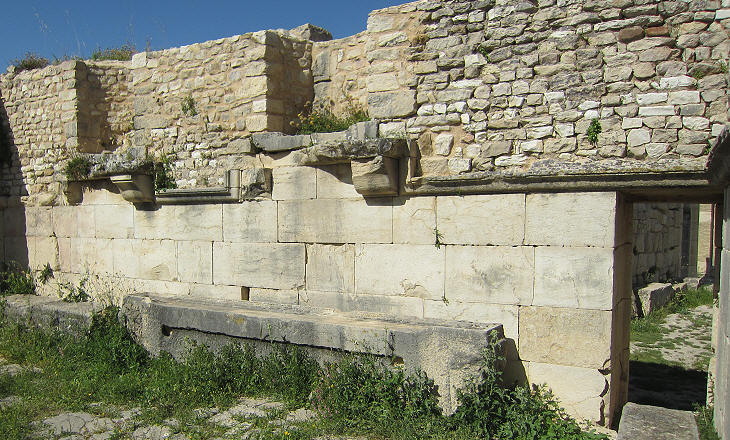 Interior of the Temple to Apollo

Only three temples have been identified at Musti; that dedicated to Apollo was turned into a Christian chapel in the IVth century, probably at the time of Emperor Constantius II. From inscriptions we know that there was a temple to Aesculapius, the god of medicine, and another one to Mercury, the god of trade. The forum probably housed a temple to Jupiter or a Capitolium, a temple to the three deities (Jupiter, Juno and Minerva) worshipped on the Capitoline hill of Rome.
Other "missing" temples are those dedicated to Saturn and Juno Caelestis, the Latin names given to Baal and Tanit, Phoenician gods. On the basis of evidence found at other towns such as Thugga and Thuburbo Majus, they were probably located out of town. Musti has not been entirely excavated. 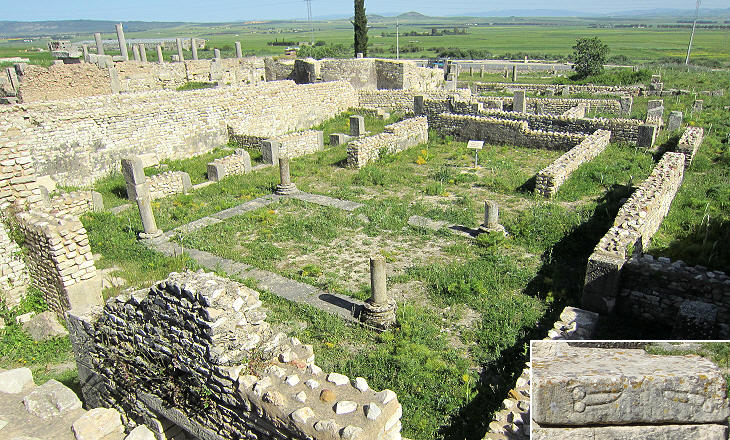 During my visit in April 2012 the ruins of Musti appeared in a state of total abandonment with no one checking the access to them. When I was wandering around the ancient buildings in total solitude, a young man materialized and offered his services as a guide, which I unwillingly accepted. Contrary to my expectations, he knew what he was talking about, but he could not refrain from labelling a large house near the Temple to Apollo as a brothel. This because of some reliefs found on nearby stones. According to local guides a brothel increases the importance of an archaeological site and raises the interest of its visitors (the same occurs at Thugga and Pompeii). 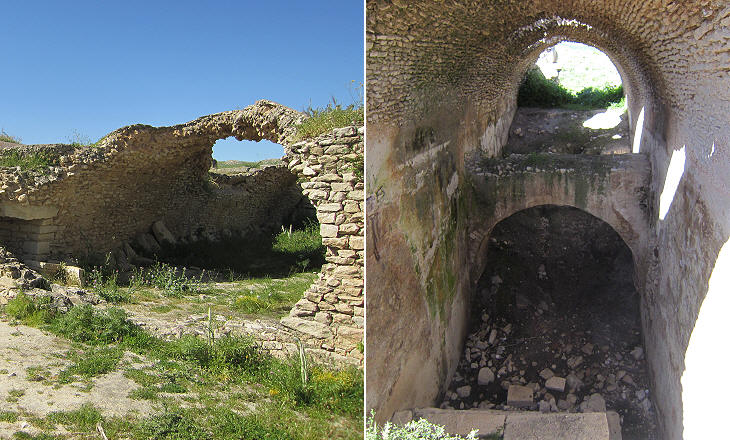 Archaeologists have identified the site of baths, a typical facility of a developed Roman town, but I was unable to find them as I did not see any large walls which usually indicate their location. Their existence however was indirectly confirmed by a series of long and deep cisterns behind the forum on slightly higher ground. 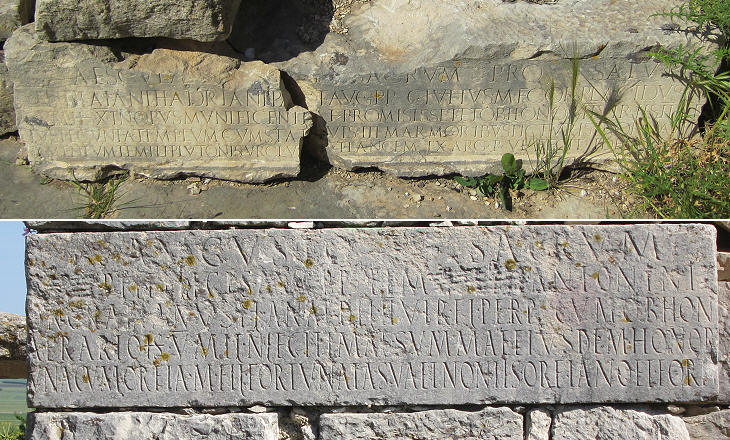 Inscription of benefactors: (above) celebrating improvements to the Temple to Aesculapius and to that of Pluto Urceus which were paid for by C. Iulius Placidus, a "flamen", and which were endorsed by the "decuriones", local magistrates in charge of the administration of the town; (below) celebrating a Temple to Mercury built with money given by L. Nonus Rogatianus Honoratus, another "flamen", and his family at the time of Emperor Macrinus

Many of the monuments in the Province of Africa were built at the initiative of local flamen, magistrates appointed to superintend the ceremonies in honour of the emperors.
In origin the title was given to actual priests, but in the provinces it was given to wealthy citizens who regarded it as a great honour and in return embellished their towns. 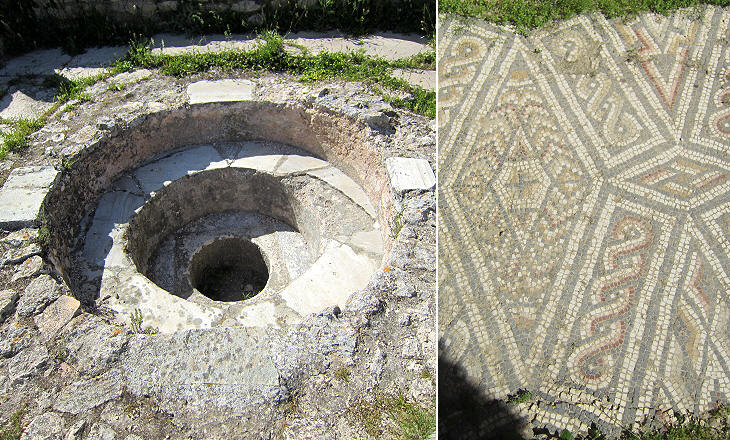 Baptistery (left) and mosaics (right) of an ancient church

Archaeologists have identified the ruins of a Christian basilica near the Temple to Pluto. The baptistery was decorated with slabs of marble and, unlike most of those found elsewhere, it had a circular shape, rather than having the aspect of a cross as at Thuburbo Majus, El-Kantara in the south of the country and other locations. The three steps leading down into the font were a symbol of the Trinity. 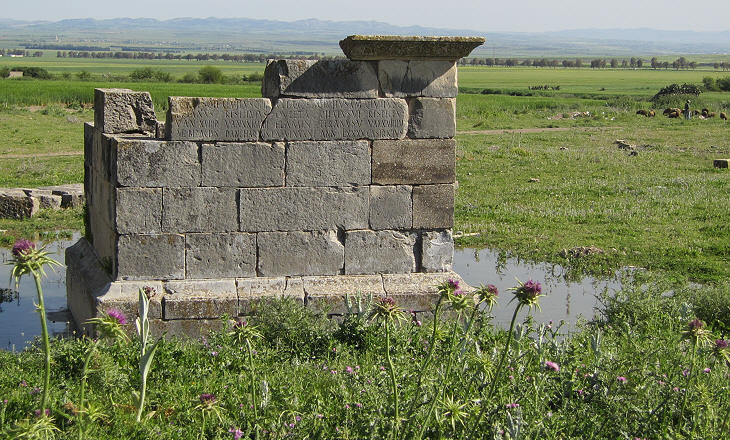 Mausoleum of the Julii

The mausoleum of a family near the Arch to Gordian (you can see them together in the introductory page) was decorated with a long inscription with the names and the ages of those whose ashes were housed inside the small building. From the inscription we learn that the Julii had a good set of genes because one of them reached the age of 91 - V(ixit) A(nnos) LXXXXI - as you can see in the image used as background for this page, a remarkable achievement for that time. You may wish to see the spectacular Mausoleum of the Julii at Glanum in Southern France. 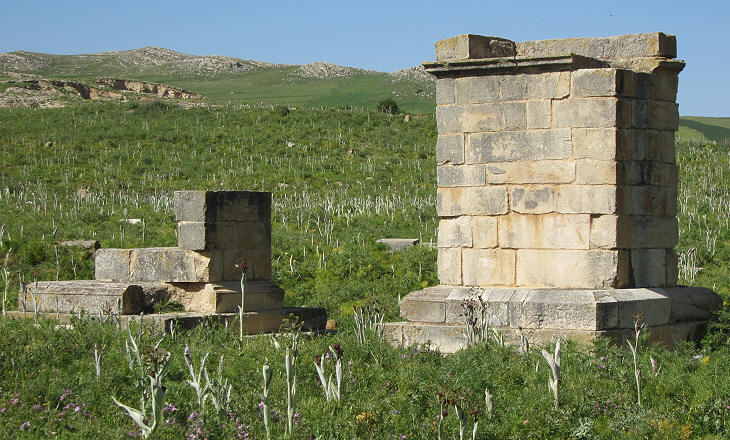 Musti was probably abandoned after the VIIth century Arab invasion, but its existence was not entirely forgotten because the site of its ruins was known as Mest Henchir, the ruins of Mest (Musti).