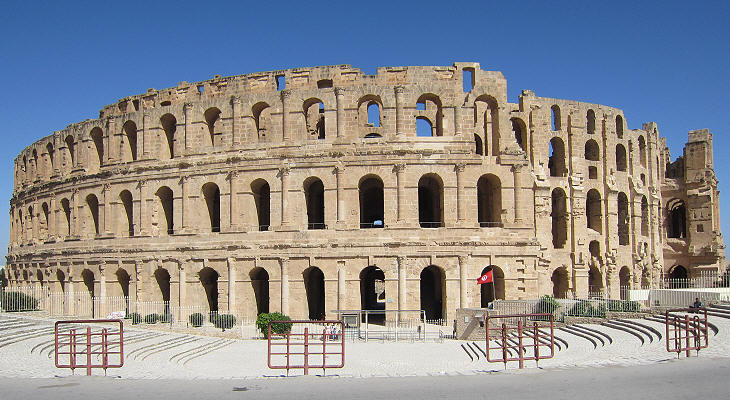 Here we have several antiquities as altars with defaced inscriptions, a variety of columns, a great many trunks and arms of marble statues one of which is of the Coloss kind in armour, another is of a naked Venus in the posture and dimensions of the Medicean, both of them by good masters, but the heads are wanting.
But Jemme (Thysdrus/El Djem) is the most remarkably distinguished by the beautiful remains of a spacious amphitheatre which consisted originally of sixty four arches and four orders of columns placed one above another. The upper order which was perhaps an Attic building is most of it tumbled down.
Thomas Shaw - Travels or Observations relating to several parts of Barbary and the Levant - 1738. 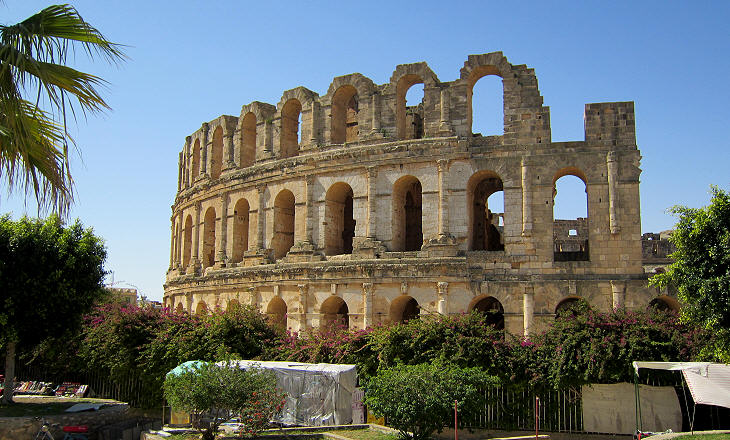 After leaving the villas and gardens (around Sfax), we entered on a vast untilled plain, only broken by a few gentle undulations, and almost totally devoid of trees. (..) The following day we pursued our course over a continuance of the same sort of uninteresting country, varied only in some places by a few scattered wild olive trees. Our ride was several times enlivened by the appearance of small parties of gazelles, which we amused ourselves by galloping after. (..) We soon after beheld the great amphitheatre towering loftily over the miserable mud hovels of the village, and appearing still more colossal from the lowness of the plain, and smallness of all surrounding objects.
Sir Grenville Temple - Excursions in the Mediterranean - 1835
Beyond Sousse the olive trees cease, and the traveller enters a wide and treeless plain, part of the district called Es-Sahel, or coast region - extremely fertile when an unusual quantity of rain has fallen, but at other times almost uncultivated, and apparently hardly susceptible of cultivation.
1895 Murray handbook for travellers in Tunisia and Algeria
Today one sees some olive groves around modern El-Djem, but they are not comparable with the vast plantations which made Thysdrus an extremely wealthy town in the IInd century AD. 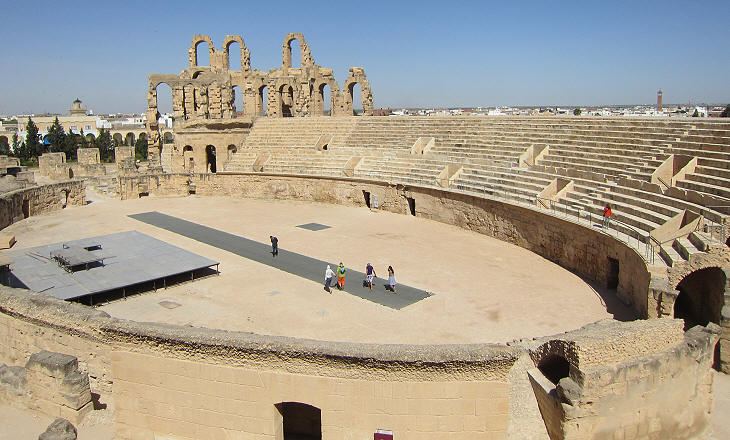 Amphitheatre - the arena and a modern reconstruction of the seating section

The construction of the amphitheatre was started towards the end of the IInd century and probably its decoration was not yet completed in 238, a crucial year in the history of Thysdrus. In 235 Emperor Alexander Severus was assassinated in Mogontiacum (Mainz) during a rebellion of legionaries headed by Maximinus Thrax, the commander of the Roman army on the Rhine border. Alexander Severus was the last of his dynasty which was founded by Septimius Severus, a native of Leptis Magna, a port in today's Libya, which was part of the Province of Africa.
The Severian emperors helped the development of their homeland by granting fiscal exemptions which were revoked by Maximinus. In 238 the rich landowners of Thysdrus promoted a revolt against Maximinus, but this was quelled by Legio III Augusta, the legion stationed in Africa, and Thysdrus was punished for its role in it (more on 238, the Year of the Six Emperors). This specific event and the ensuing period of military anarchy in the Empire led to halting the decoration of the amphitheatre. 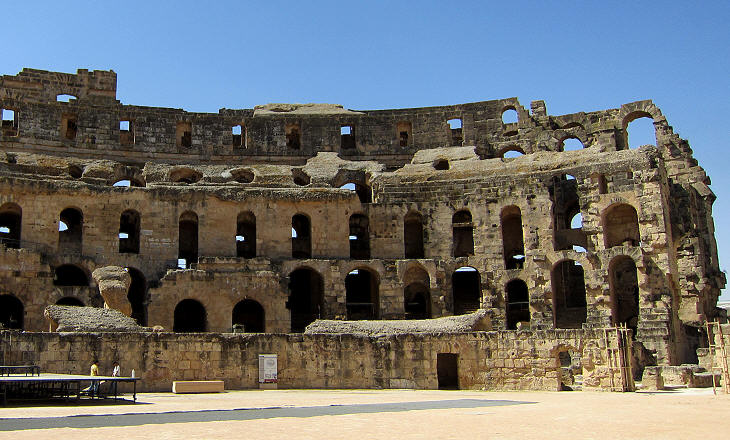 Similar to the Colosseum of Rome and to the theatre of Bosra, the amphitheatre was turned into a fortress when the locals tried to check the Arab invasion of the region after the Byzantines had been defeated at Sufetula in 647. In 670 the Arabs founded Kairouan, forty miles north of Thysdrus, and made it the capital of the country. This fact, associated with the arrival of Arab nomadic tribes which led to the abandonment of farming, caused the decline of Thysdrus.
Mahomet Bey likewise in a late revolt of the Arabs who used it as a fortress blew up four of its arches from top to bottom, otherwise as to the outside at least nothing can be more entire and magnificent. Shaw
In 1695 some breaches were opened in the northern part of the amphitheatre to prevent it being used as a fortress again. This led to its becoming a quarry for the construction of a village. 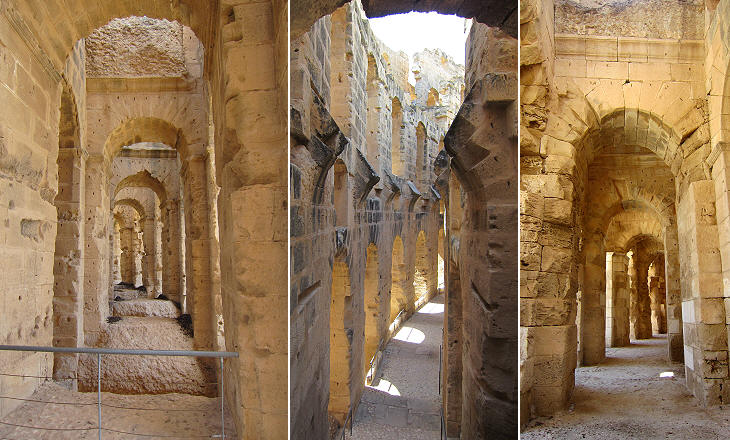 The Amphitheatre of El Jem bears outstanding witness to Roman architecture, notably monuments built for spectator events, in Africa. Located in a plain in the centre of Tunisia, this amphitheatre is built entirely of stone blocks, with no foundations and free-standing. In this respect it is modelled on the Coliseum of Rome without being an exact copy of the Flavian construction. Its size (big axis of 148 metres and small axis 122 metres) and its capacity (judged to be 35,000 spectators) make it without a doubt among the largest amphitheatres in the world. Its facade comprises three levels of arcades of Corinthian or composite style. Inside, the monument has conserved most of the supporting infrastructure for the tiered seating.
From the UNESCO synthesis of the universal value of the amphitheatre of Thysdrus which in 1979 was included in the World Heritage List.
Today the amphitheatre is a main attraction for the holidaymakers of the nearby coastal resorts at Sousse, Monastir and Mahdia. Part of the arena has been rebuilt to house a yearly music festival. 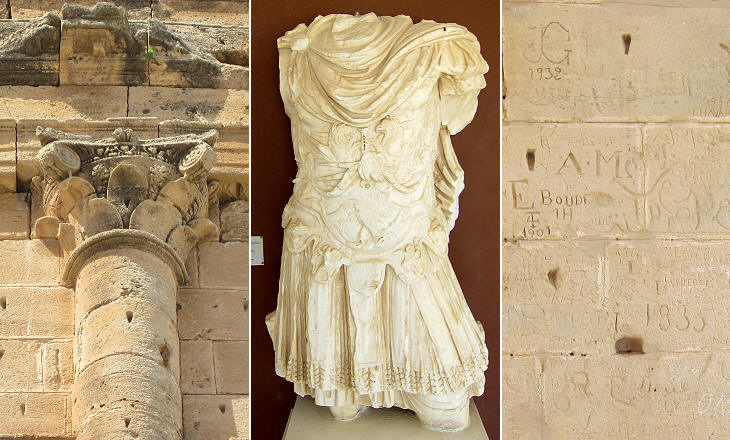 (left) A composite capital; (centre) statue of an emperor mentioned by Shaw at the Museum of El-Djem; (right) graffiti which is useful in understanding which parts of the amphitheatre are not a reconstruction

It is an edifice which, though yielding in magnitude and splendour to the Coliseum, is still one of the most perfect, vast, and beautiful remains of former times, that exists - at least to our knowledge - combining in itself more of these united properties, than any other building which I can at this moment bring to my recollection. (..) The key-stones of the outward arches of the lower order were intended each to have borne some figure sculptured in relief (as at Capua). Temple 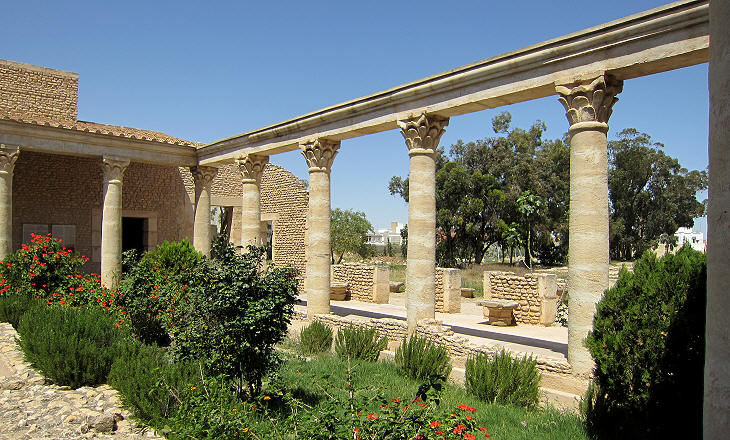 There is little of interest at El-Djem, save its amphitheatre, which may be said to be all that remains to mark the site of the ancient city of Thysdrus, or Thysdritana Colonia. The modern village is built entirely from its ruins, and all that is visible of the city itself are a few foundations and tombs towards the N.W. Murray
The only other remaining monument of Thysdrus, with the exception of the House of Africa, is an older amphitheatre which was located to the south of the main one. Its size does not appear to have been small and it is believed it could seat an audience of 8,000, so the construction of the new one was motivated by the desire to show the wealth of the town, rather than by actual need. The ticket for the amphitheatre is valid for visiting also the Archaeological Museum of El-Djem which is located near the reconstructed premises of the House of Africa, a Roman house uncovered in the outskirts of the modern town. It is named after two mosaics portraying the Province of Africa, one of which is shown in the introductory page. 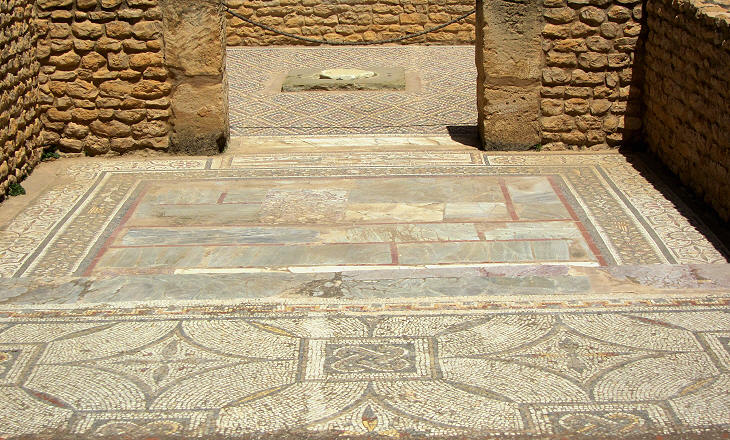 The image used as background for this page shows a mosaic of the House of Africa portraying Venus swimming in a shell.