- Medina Azahara
(left - Mosaic at Italica; right - decoration at the Alcazar of Seville)

You may wish to see an introductory page to this section or a page on Moorish Cordoba first. 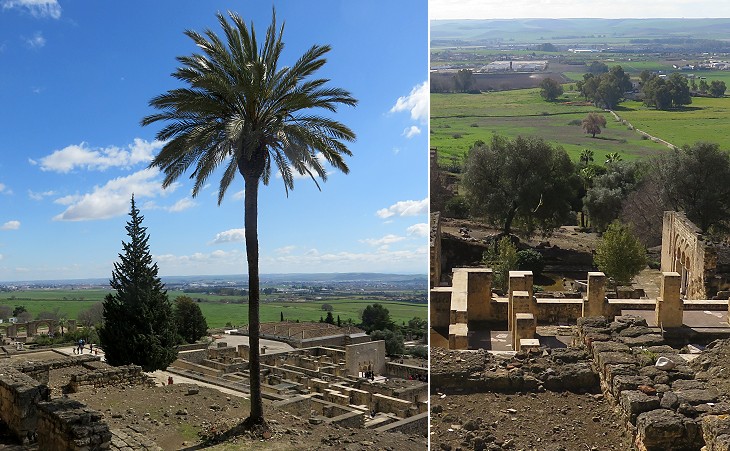 Abdoulrahman built a new town* three miles from Cordova, called Zahra or Arizapha, from the name of his favourite mistress. The palace was erected upon the plans of the most celebrated architect of Constantinople, at that time the best school and nursery of artists in the world.
* Supposed to have been at a place called Cordova la Vieja. There is nothing but a few ruins to support the conjecture.
Henry Swinburne - Travels through Spain in the Years 1775 and 1776 in which several monuments of Roman and Moorish architecture are illustrated.
We hear of a town called Zehra, which Abderame II built at the foot of the mountains, two miles from Cordova, for a favourite slave of that name. The account given of it is worthy the Arabian Nights' Entertainments. Limpid streams meandered through the streets to render it cool, spouting fountains embellished the squares; the houses, of an airy graceful architecture, were uniform, with flat roofs, on which were gardens and orange groves; there were 12,000 columns of granite and different Egyptian and Spanish marbles in the palace; in the principal apartment the walls were covered with ornaments of gold, and several animals of the same metal poured water into an alabaster bason. The pavilion, where Zehra spent the evenings with Abderame, was lined with gold and steel, studded with jewels, and lighted by a hundred crystal lamps filled with fragrant oils. The building of this palace and the town is said to have cost 7,500,000 gold dinars, or upwards of three millions sterling. Not a vestige remains of all this, it is not even known in the country whereabouts the palace and town stood; indeed the memory of it is only preserved by the account found in one or two authors, and it may well be suspected to have existed only in the pages of the writers of romance.
Alexandre de Laborde - A View of Spain - translated into English for Longman, Hurst, etc. 1809 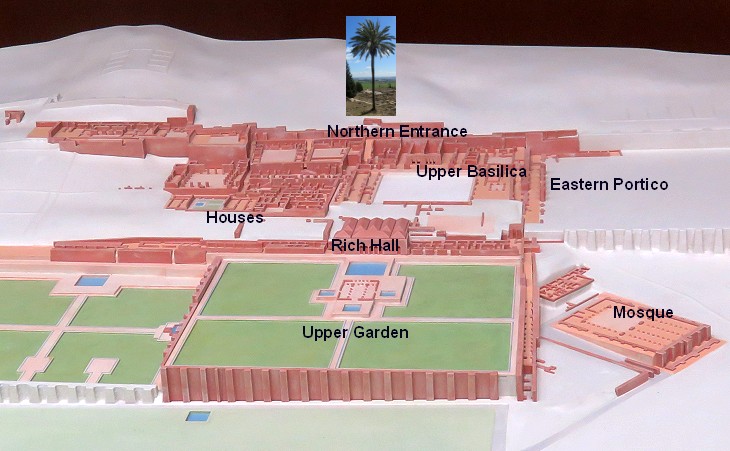 Museum of Medina Azahara: model of the archaeological site

At San Francisco de la Arrizafa was the fairy villa, the Bizzifah of Abdu-r-rahman. (..) This museum of Oriental art, like the villa of Hadrian, near Tivoli, was entirely destroyed, Feb. 18, 1009. Now, even the traces of these palaces cannot be made out - "etiam periere ruinae" (even the ruins have perished). A scheme has recently been set on foot to make excavations and researches.
Richard Ford - A Handbook for Travellers in Spain - 1855
In 1853 the ruins of Cordoba la Vieja were positively identified as those of the town founded by Caliph Abd ar-Rahman III and completed by his son al-Hakam II in ca 936-976. Proper archaeological excavations did not start until 1911 and through various phases they uncovered the foundations of elaborate gardens and pavilions, of a number of houses and of some ancillary facilities. Most of the town and presumably other parts of the Caliph's estate are still to be unearthed. 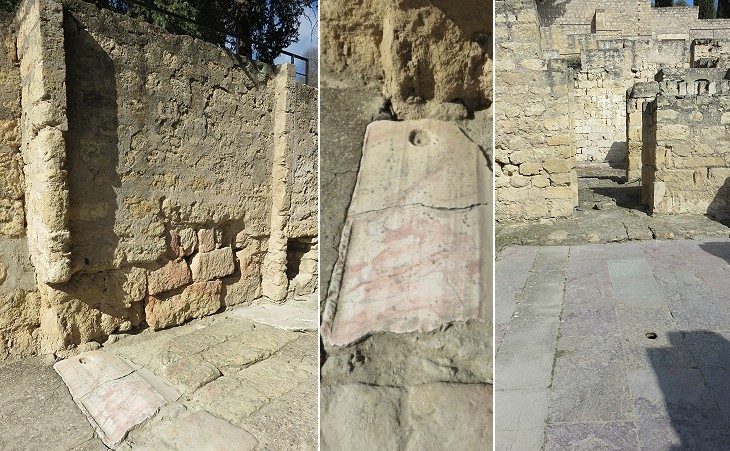 The buildings of the excavated area were distributed on a series of terraces sloping down from north to south. An entrance has been identified at the top of the hill. It was not the main one and thus it did not have monumental features. Archaeologists have partially rebuilt its walls to make them more visible. Unlike what occurred in other excavations (e.g. at Troy) they did not have to tackle the issue of dealing with several layers of ruins. Medina Azahara did not exist for more than fifty years. It was destroyed during a civil war and then it became an open air quarry. 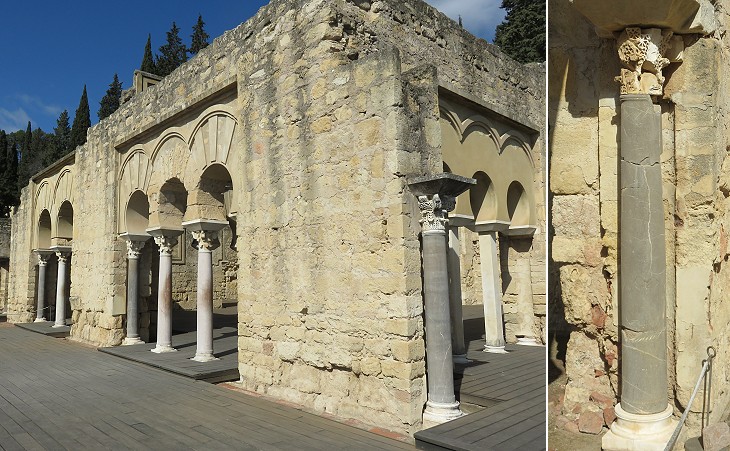 According to Arab chronicles the Caliph had a guard of 12,000 lancemen. Stables for twenty-five horses have been identified near a reconstructed basilica. Columns, capitals and fragments of its decoration indicate it was the reception hall of an important member of the caliphal court, perhaps the commander of the guard. 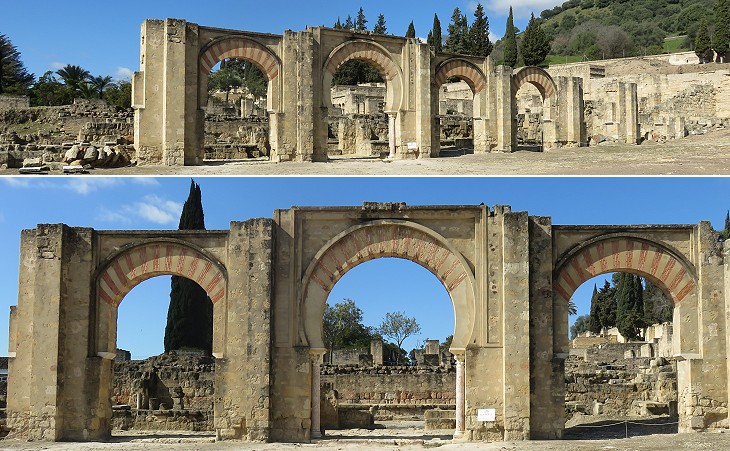 Views of the Great Eastern Arcade

A very large square open space has been identified in the eastern part of the archaeological area. Its purpose was perhaps that of allowing the Caliph to review a military parade from a small platform. Evidence of a portico was found on one of its sides, but it might have had porticoes on all of them. The arches of the partially reconstructed portico were decorated with alternate stripes of bricks and white stones, similar to those in the prayer room of the Great Mosque of Cordoba. 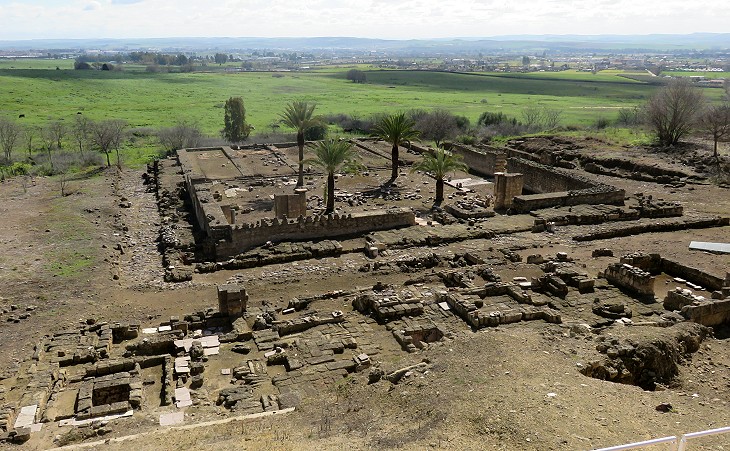 Mosque; in the foreground some facilities related to it

Based on inscriptions the completion of the mosque is dated 945. It was not reserved to the Caliph and his court, but there was a direct access to it from the palace. The prayer hall had five aisles and was preceded by a courtyard (the area with the four palm trees) with a minaret in the external wall. It is most likely that the mosque had many columns and other marble architectural elements, but it was pillaged through the centuries in such an effective way that no traces of them were found. 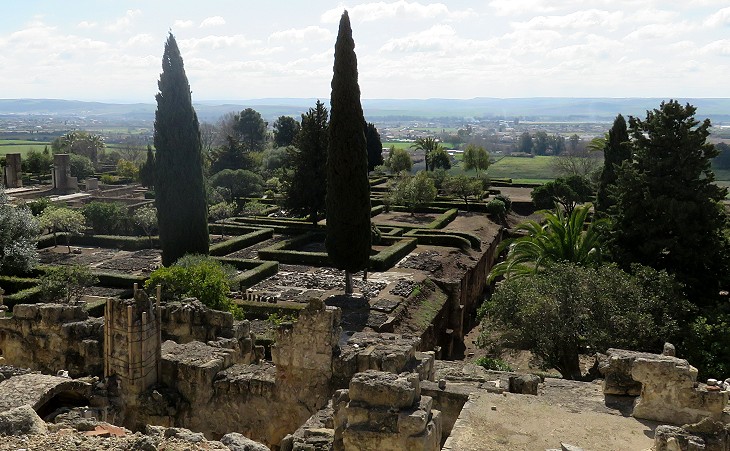 Here the emperor was wont to take the diversion of hunting. (..) At his return from the chase, he usually retired to rest himself in a splendid pavilion erected in the middle of the gardens, overlooking all the adjacent country. Swinburne
On a terraced area archaeologists found evidence of extensive gardens and of a pavilion at their northern end. It is known as the Rich Hall because of the marble columns, capitals and plinths which were found there. Its "restoration" began in 1949 and it actually entailed the almost total construction of a new building (it opens in another window). 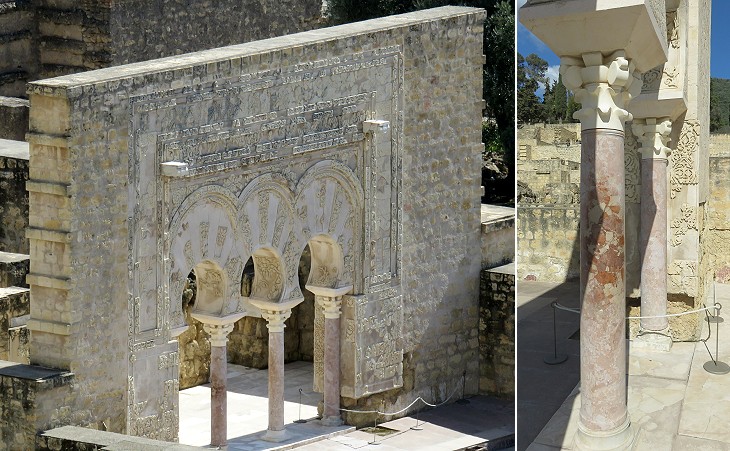 House of Ya'far: horseshoe arches in the public part of the building (see a detail in the introductory page)

One of the private residences which were identified near the Rich Hall is named after Ya'far ibn Abd ar-Rahman, hajib (the highest officer) of Caliph al-Hakam II, who was appointed in the year 961 and died ten years later. The building was conceived for the private use of a high dignitary of the court. It had areas where the landlord received his guests and private ones for the family. 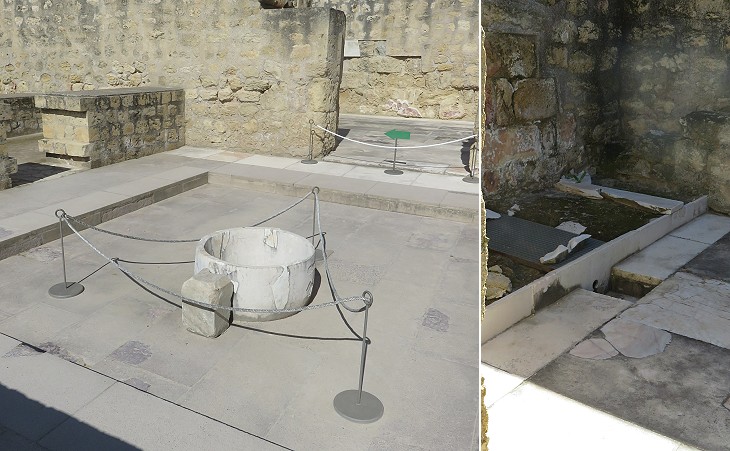 The private area has a series of rooms finishing in a bedroom, preceded by a courtyard with a marble sink and a fountain. The marble sink brings to mind the impluvium, a basin to collect rainwater in the tablinum, a courtyard of Roman houses and it is not the only detail which derives from Roman architectural patterns. 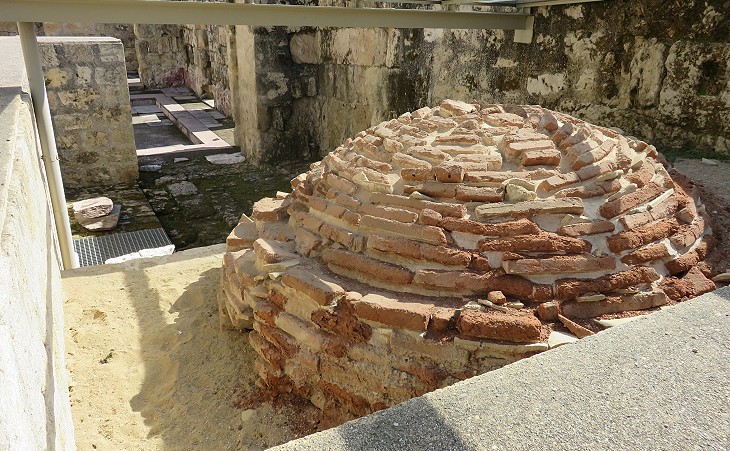 House of the Servants: oven

A number of buildings have been identified near the House of Ya'far and other large houses. They consist of many small rooms with a maze of passages among them. It seems they were dependencies of the houses of the rich. 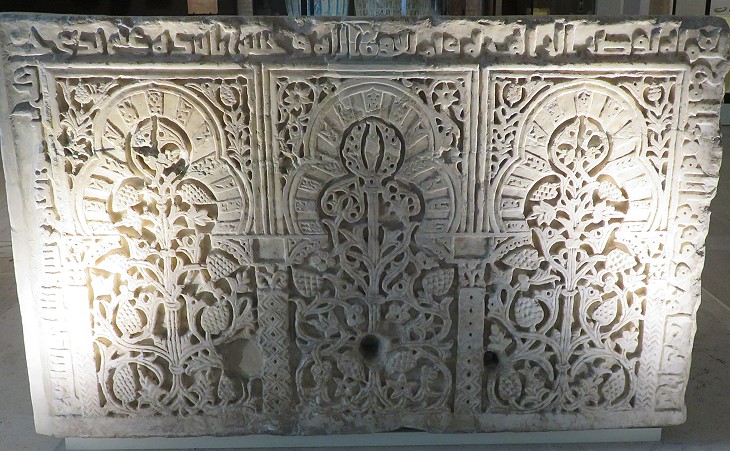 The works of art which were found during the first excavations were sent to Madrid. This fine marble panel bears a long inscription which helped archaeologists in dating the construction of Medina Azahara. It says that it was made by order of Al-Mansur in the year 377 AE (987-988 AD). The inscription does not mention the ruling Caliph, an indication of the great power of Al-Mansur, who gave his name to the last enlargement of the Great Mosque of Cordoba. 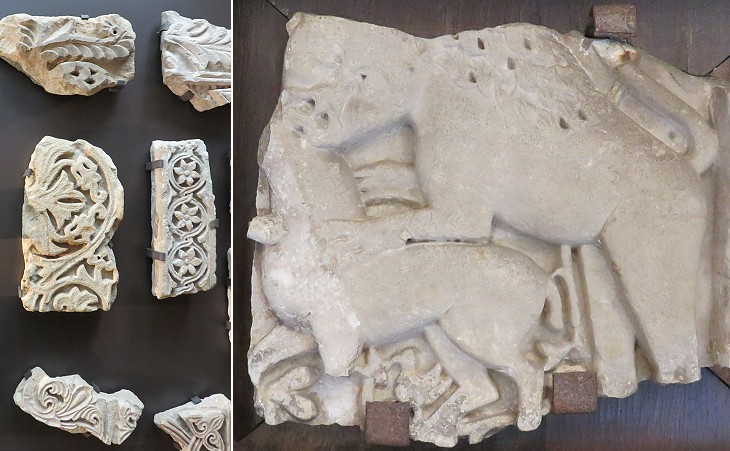 In the middle was a marble basin surrounded with various figures of animals spouting water; all these statues were gilt and enriched with precious stones. (..) Over the principal entrance, in open defiance of the express mandate of the prophet, stood the statue of the fair Sultana who gave her name to this new city. Swinburne
While the prohibition of portraying living beings was strictly complied with in mosques, there are many residences of Muslim rulers which were decorated with reliefs (e.g. at Konya) or frescoes (e.g. at Qasr al-Hamra in Jordan and Isfahan) which depicted human beings and animals. 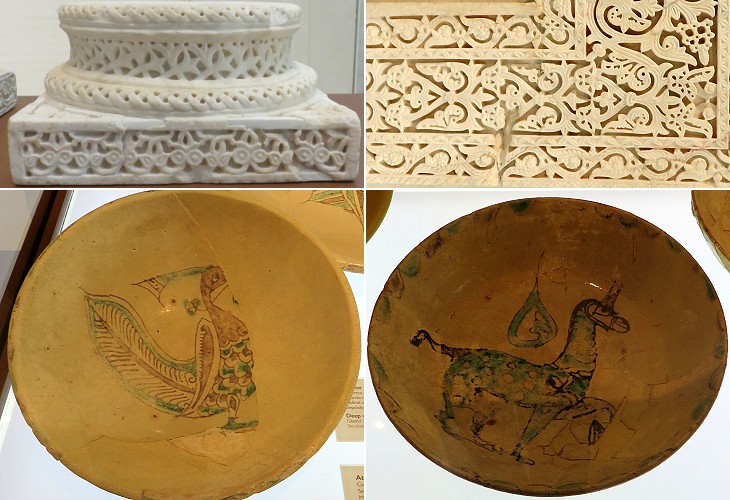 In 2009 a fine museum was inaugurated in the proximity of the archaeological site to house exhibits which were found there. They are very similar to those at the Archaeological Museum of Cordoba. Some of the wares found at Medina Azahara are regarded as early examples of cuerda seca, a technique for using a plurality of colours. Museum of Medina Azahara: decorative architectural fragments; the image used as background for this page shows a detail of a stucco capital