- "Castles" in the Desert - p.2
(left: J. L. Burckhardt in Arab attire in a XIXth century engraving; right: the Treasury of Petra)

If you came to this page directly, you might wish to read a page with an introduction to this section or page one (with a map) first. Views of the castle

This small building is made more imposing by its symmetric design and by its location on slightly elevated ground. It is surrounded for miles and miles by a barren landscape with no other buildings in sight. It has the appearance of a fortress, but its towers and buttresses are solid and they serve a structural and decorative purpose, rather than a defensive one. The southern façade houses the main and only gate to the palace. The entrance is centrally located and stands encapsulated by two quarter-round buttresses. Bands of vertical openings run the course of the outer surface of the structure. The design of this castle was most likely an example followed in the construction of larger Umayyad "desert castles" e.g. Qasr al-Hayr al-Sharqi in Syria.
Qasr al-Kharanah was rediscovered in 1901 by Alois Musil who visited it under the auspices of the Vienna Imperial Academy of Sciences after a first journey in the region in 1898. 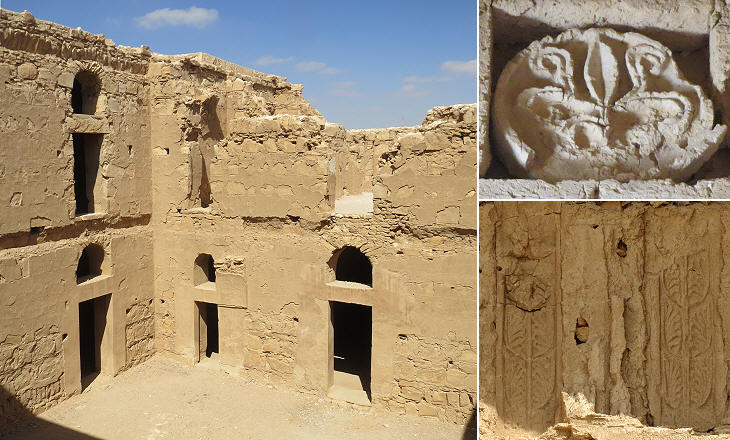 (left) Courtyard; (right) stucco decoration inside a room (above) and at the entrance

The lack of a system to capture rainfall indicates that Qasr al-Kharanah was used on a temporary basis only. It was built before 710 by the first Umayyad Caliphs to be used by their representatives for meetings with leaders of Bedouin tribes.
The interior of the building had some stables on the ground floor and several rooms on the upper one. 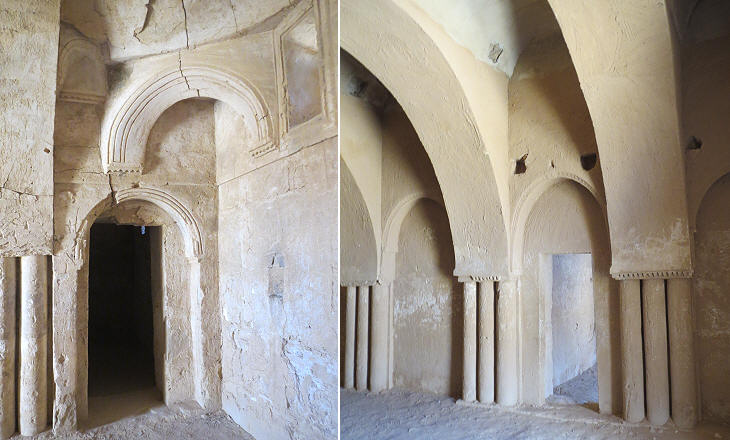 Rooms on the upper floor

The rooms on the upper floor contain nearly all and certainly the most pronounced decorative detail in the building featuring stucco moldings, sculpted plaster roundels, and both closed and open arcades. The size and architectural design of the upper floor rooms indicate that they were meant for important guests. 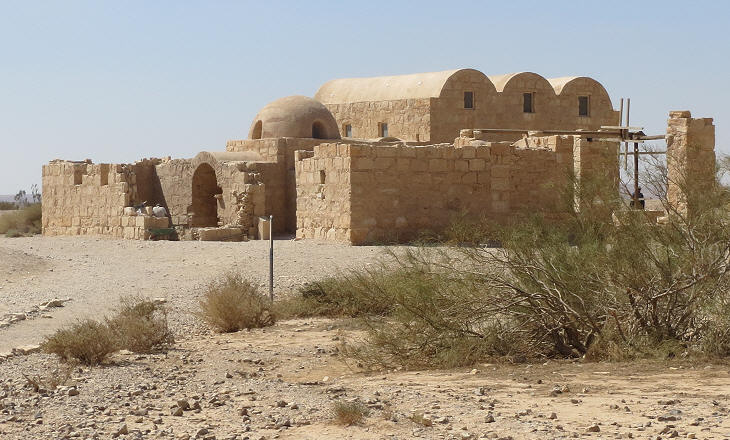 Graecia capta, ferum victorem cepit (Captive Greece conquered her savage conqueror) Horace - Epistles 2.1.156. Horace had in mind the impact of Greek culture on the Romans, but the sentence could apply as well to the Umayyad caliphs who set their residence at Damascus who were fascinated by the heritage of the Roman/Byzantine Empire.
Qasr al-Hamra was built as a faraway residence where they could live in a classic ambiance, without being seen and being accused of impiety by their Muslim subjects. It was discovered in June 1898 by Alois Musil, who revisited it in 1900 and 1901 and made a complete survey of it. 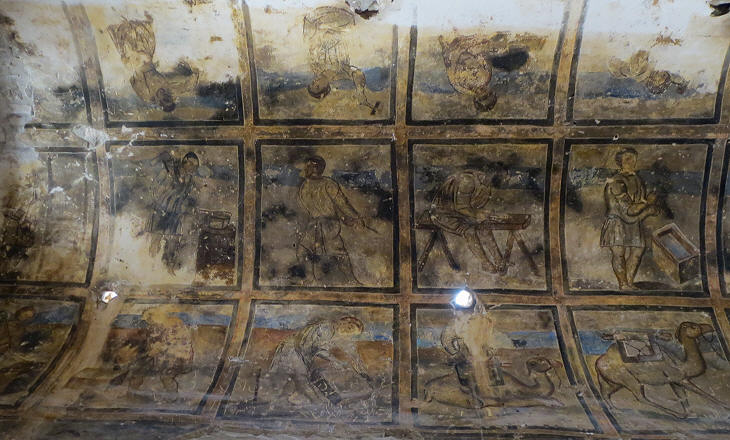 Fresco on the ceiling of the hall depicting men at work

This exceptionally well-preserved desert castle was both a fortress with a garrison and a residence of the Umayyad caliphs. The most outstanding features of this small pleasure palace are the reception hall and the hammam, both richly decorated with figurative murals that reflect the secular art of the time. (..) The extensive fresco paintings of the reception hall and bath building, in creating a place of relaxation for the Prince away from earthly cares, provides new insight to early Islamic art and its derivation from classical and Byzantine precedents.
From the UNESCO synthesis of the universal value of Qasr al-Hamra which in 1985 was added to the World Heritage List.
The size of the hall and of the adjoining baths indicate that very few members of the court accompanied the Caliph to this palace. They must have been very trusted persons, because the decoration of the building was entirely at odds with the Muslim prohibition of portraying human beings.
The frescoes which cover all the walls responded to a complex iconographic symbolism. The men at work shown above were probably an allegory of the positive effects of the Umayyad good government. 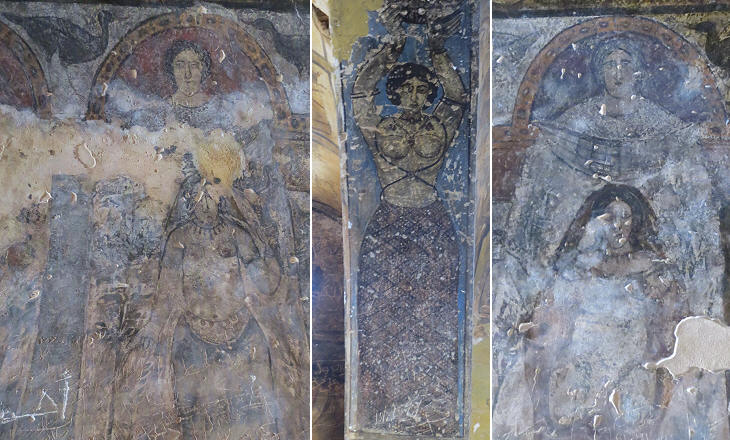 Frescoes in the hall portraying kings and dancers

Chronicles report that when the Arabs conquered Persia they found that some royal palaces were decorated with series of portraits of Sassanid rulers. This might have influenced the decoration of the apse of Qasr al-Hamra with the portraits of six foreign kings paying tribute to the Caliph (whose portrait has been defaced).
The figures of female dancers which complete the decoration of the hall were perhaps prompted by floor mosaics such as those which decorated Roman houses and villas, e.g. at Philippopolis. 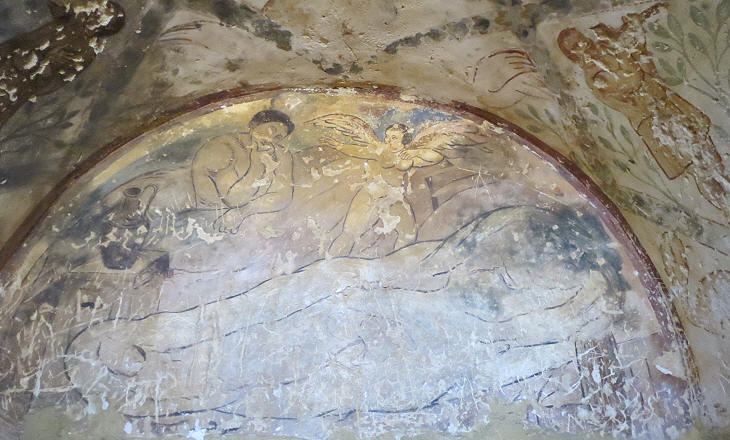 In the afternoon, tired, we came to Kusair el Amra.... In the cool dusk of its hall... we lay . . . puzzling out the worn frescoes of the wall, with more laughter than moral profit.
T. E. Lawrence - Seven Pillars of Wisdom - Chapter LXXV
The bath adjoining the main hall, although very small, was divided into the three sections (calidarium, tepidarium and frigidarium) of Roman baths. Its decoration could be interpreted as having a sexual connotation, but the nakedness of the women depicted on some walls could be motivated by the desire to imitate the classic tradition of placing statues of naked gods or heroes in public baths, e.g. at Terme di Caracalla in Rome. 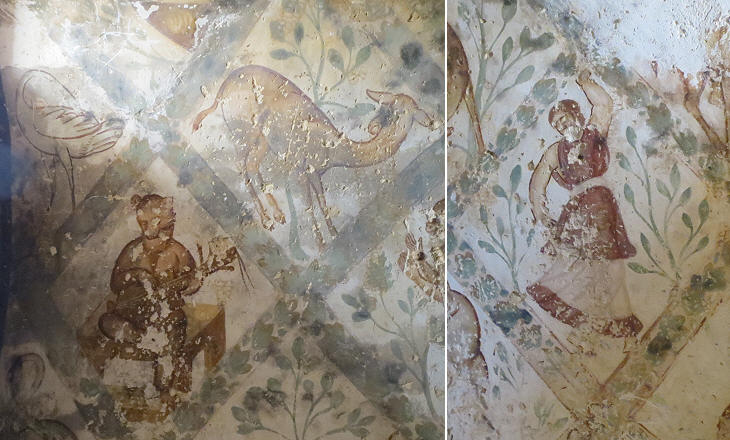 Ceiling of one of the bath rooms

One of the ceilings of the bath is decorated with a variety of subjects, mainly animals, perhaps suggested by the many mosaics which depicted Orpheus taming the animals playing the lyre.
The bear playing a sort of guitar could be a representation of Callisto, the nymph of Artemis who was turned into a bear by Zeus. Later on, when she was about to be killed by her unaware son, Zeus turned her into Ursa Major (the Great Bear Constellation). The story of Callisto is narrated among others by Ovid and it was very popular throughout the whole Roman Empire. According to Ovid, Callisto, although having the appearance of a bear, retained her gentle heart. 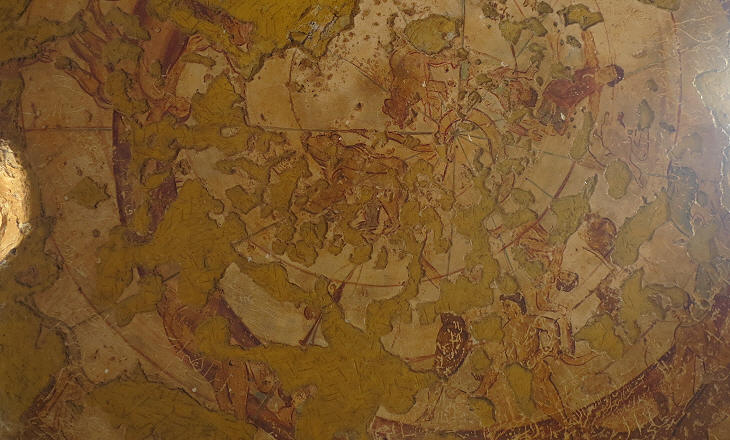 Constellations in the northern celestial hemisphere in the dome of the calidarium; you may wish to see a Renaissance depiction of the constellations at Palazzo Farnese di Caprarola

The extensive fresco paintings of the bath building and reception hall are unique for Islamic architecture of the Umayyad period. The wall paintings show influences from classical pagan themes, Byzantine style portraits and hunting scenes, depictions of animals and birds, and are accompanied by inscriptions in Greek and Arabic. The representation of the zodiac on the domed ceiling of the caldarium (hot room) is one of the earliest known surviving portrayals of a map of the heavens on a dome. UNESCO
The Great Bear and the personifications of other constellations are still visible in a very interesting depiction of the sky. The Arabs rapidly assimilated the astronomical knowledge of the conquered civilizations including the Indian one. 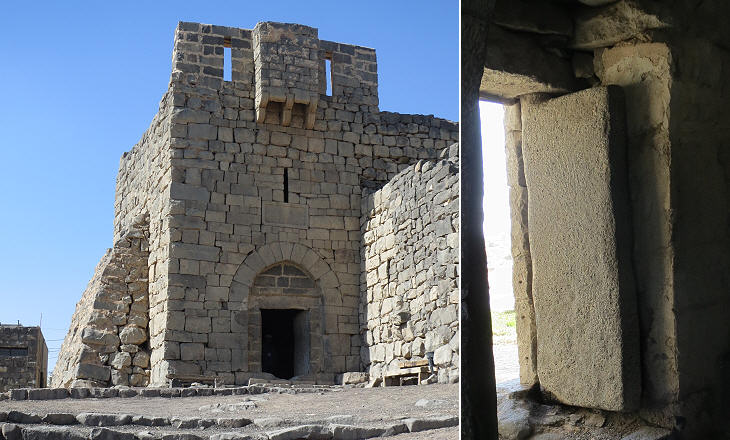 (left) Entrance to the castle; (right) its basalt door

Qasr al-Azraq is the only "desert castle" which deserves this name. It was built as a fortress by the Romans and it was strengthened in 1236 by a local emir. It is situated along the main road between Jordan and Iraq.
Because of the basalt stone with which it was built it ought to be called the Black Castle, rather than the Blue Castle (Azraq means blue), but the name derives from the abundance of water in its environs. It was discovered by Musil immediately after Qasr al-Hamra. 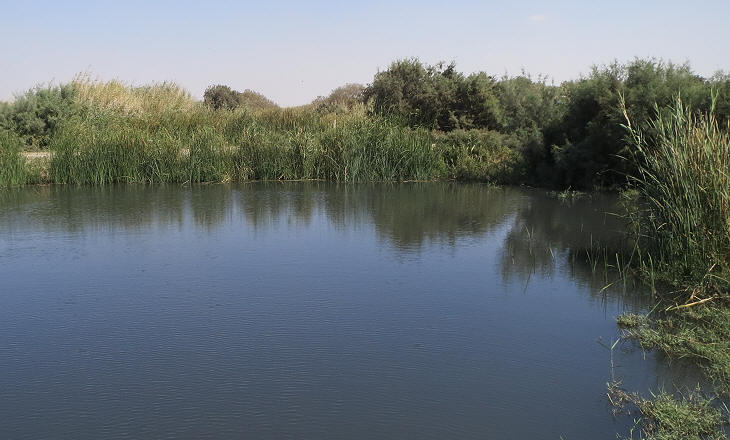 It was to be Ali's first view of Azrak, and we hurried up the stony ridge in high excitement, talking of the wars and songs and passions of the early shepherd kings, with names like music, who had loved this place; and of the Roman legionaries who languished here as garrison in yet earlier times. Then the blue fort on its rock above the rustling palms, with the fresh meadows and shining springs of water, broke on our sight. Lawrence
At the beginning of the 1960s water from the oasis started to be pumped to Amman and the swamps dried up by the mid-90s. Wetland has been restored on a small portion of the original swamp, mainly to provide migrant birds with a much needed stop in their journey across the desert. 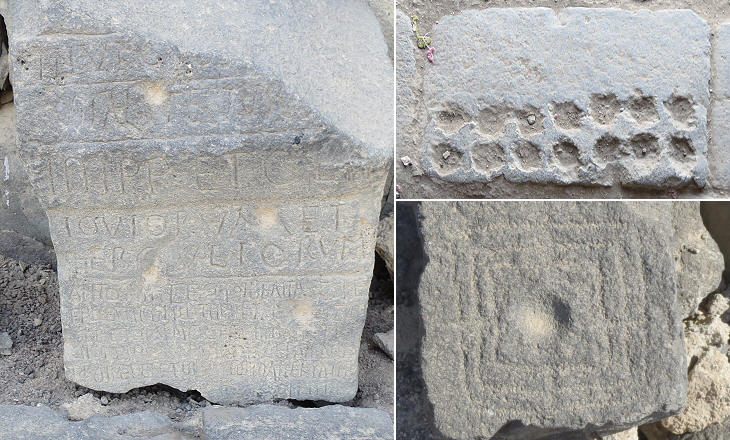 (left) Latin inscription celebrating Emperors Diocletian and Maximilian; (right) stones carved in order to use them for betting games: the upper one is very common, the lower one can be seen at Jerusalem and Sepphoris

The Romans built the fortress to restore their rule in the region, most likely immediately after Emperor Aurelian had defeated and captured Zenobia, Queen of Palmyra. The revolt she led had greatly damaged the image of Rome and Aurelian and his immediate successors decided to locate several garrisons in the region, including Palmyra itself where Diocletian built a fortress. 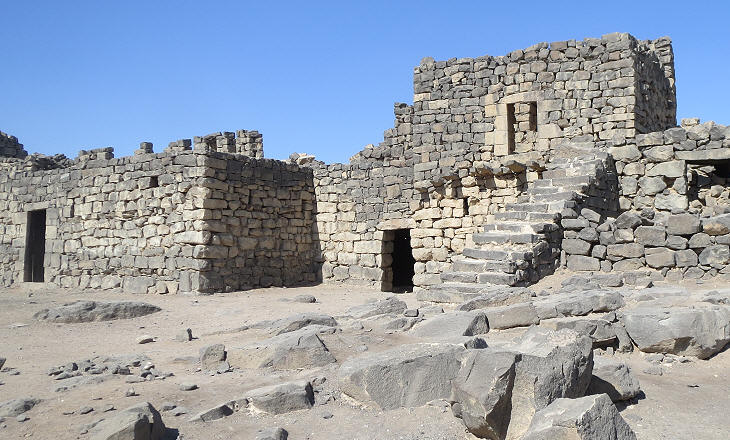 Two-storey buildings in the courtyard

The restoration and enlargement of Qasr al-Azraq occurred during the last years of the Ayubbid rule. An inscription at the entrance indicates the year 1236 and the founder, the Emir of Salkhad, a town and fortress in the Hauran region (the fortress was destroyed by the French in the 1920s). Musil met with a caravan bearing salt from the marshes near al-Azraq. Such caravans regularly followed the old Roman road from al-Azraq to the Hauran and Damascus. 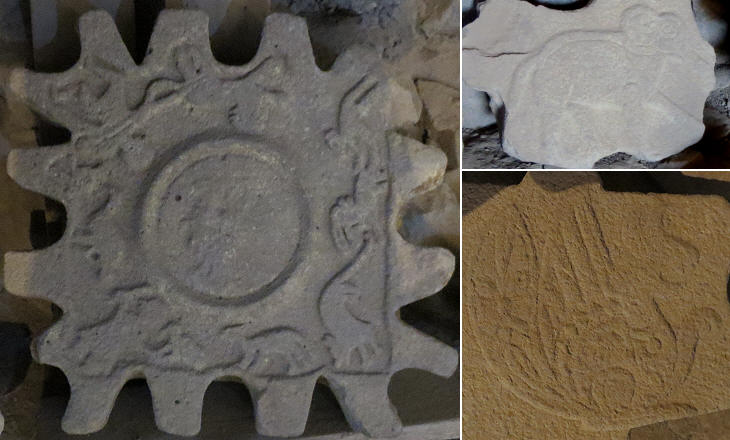