July 7th, 1812 - The communications in these deserted countries are far from being regular and the want of a proper guide obliged me to delay my departure from Szalt (Al-Salt) for ten days; during this delay I had the good fortune to see the ruins of Amman which I had not been able to visit in the course of my late tour in the Decapolis. (..) We set off before sunrise. (..) The ruins which we passed (..) present no objects of any interest. They consist of a few walls of dwelling houses, heaps of stones, the foundations of some public edifices, and a few cisterns now filled up; there is nothing entire, but it appears that the mode of building was very solid, all the remains being formed of large stones. It is evident also, that the whole of the country must have been extremely well cultivated, in order to have afforded subsistence to the inhabitants of so many towns. At the end of three hours and a half we entered a broad valley, which brought us in half an hour to the ruins of Amman, which lies about nineteen English miles to the S.E. by E. of Szalt.
J. L. Burckhardt - Travels in Syria and the Holy Land - 1822 Plan of the ruins of Amman

I had a great desire to visit Amman, once the residence of many monarchs, and which in after times became celebrated under the name of Philadelphia, among the decapolitan towns. (..) Although this town has been destroyed and deserted for many ages, I still found there some remarkable ruins, which attest its ancient splendor.
Ulrich Jasper Seetzen - A Brief Account of the Countries Adjoining the Lake of Tiberias, the Jordan, and the Dead Sea - 1810
At Feheis I was so fortunate as to find a guide who five years ago had served in the same capacity to Mousa, the name assumed by M. Seetzen. He engaged to take me to Amman. (..) The annexed plan will give an idea of the situation and ruins of Amman, one of the most ancient of the cities recorded in Jewish history. Burckhardt
According to the biblical account Amman (at the time Rabbat Ammon) was the capital of a kingdom founded by Ammon, son of Lot. The kingdom was conquered by David. In the IIIrd century BC the town was renamed Philadelphia by Ptolemy II Philadelphus, Macedonian Pharaoh of Egypt. King Faysal Street in the centre of modern Amman; (inset) sign of one of the first coffee-shops

The edifices which still remain to attest the former splendour of Amman are the following: a spacious church (b), built with large stones, and having a steeple of the shape of those which I saw in several ruined towns in the Haouran. There are wide arches in the walls of the church. - A small building (c), with niches, probably a temple. - A temple (d), of which a part of the side walls, and a niche in the back wall are remaining; there are no ornaments either on the walls, or about the niche.
When Burckhardt visited Amman the site was not inhabited and in general the whole region around it was almost unpopulated. In 1880 the Ottoman government relocated Muslim refugees from northern Caucasus territories which had been conquered by Russia to Amman. The new settlers might have utilized some of the stones of the ancient buildings for their houses, so that only a limited number of the monuments described by Burckhardt have survived to the present day.
In 1921 Amman was chosen as capital of the British Mandate over Transjordan, which eventually became the Kingdom of Jordan. At that time the whole country had a population of ca 200,000. In 2013 the inhabitants of Amman and its environs were in the region of 3,000,000. 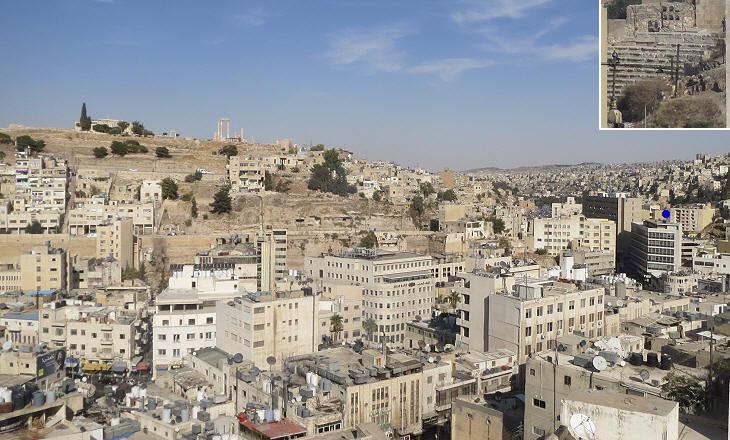 View of the valley of Moiet Amman; the Citadel is on the left and the blue dot indicates the site of the Roman Theatre (in the inset)

The town lies along the banks of a river called Moiet Amman, which has its source in a pond (a), at a few hundred paces from the south-western end of the town; I was informed that this river is lost in the earth one hour below the pond, that it issues again, (..) then disappears a second time and rises again near a ruined place called Reszeyfa. (..) The river of Amman runs in a valley bordered on both sides by barren hills of flint, which advance on the south side close to the edge of the stream.
The stream mentioned by Burckhardt was covered by the buildings of the new town. Today its valley is crossed by a steady stream of cars. 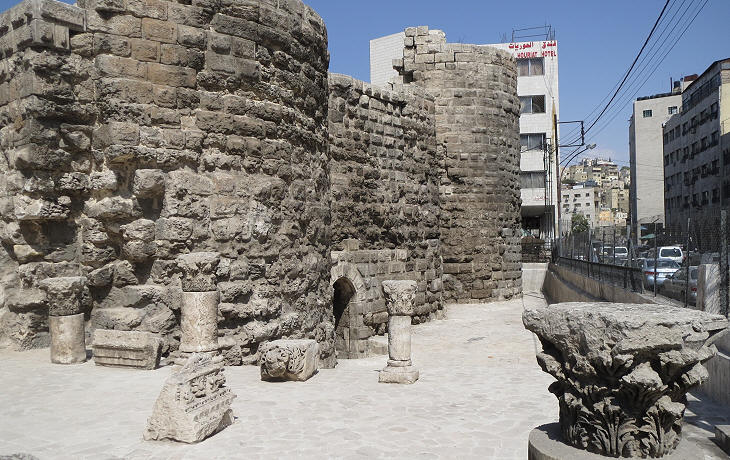 Nymphaeum - e in the plan

(The edifices are) a curved wall (e) along the water side, with many niches: before it was a row of large columns, of which four remain, but without capitals, I conjecture this to have been a kind of stoa, or public walk; it does not communicate with any other edifice.
The building described by Burckhardt is now believed to have been a nymphaeum, a monumental fountain which was most likely situated at the very centre of the ancient town. It was turned into a small fortress, perhaps in the XIIth century. 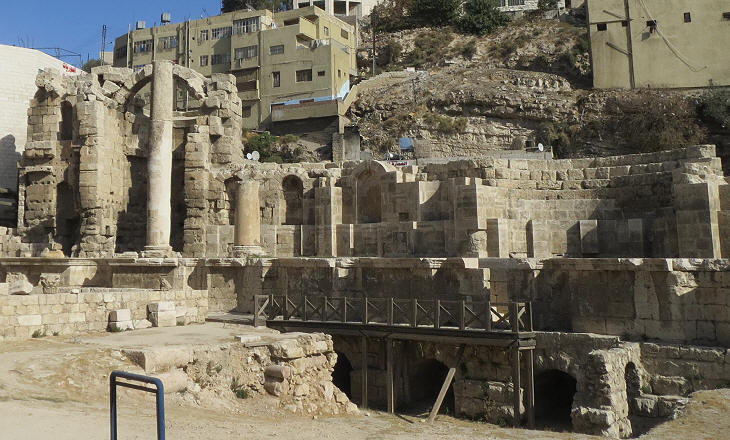 (The edifices are) a high arched bridge (f) over the river; this appears to have been the only bridge in the town, although the river is not fordable in the winter. The banks of the river, as well as its bed, are paved, but the pavement has been in most places carried away by the violence of the winter torrent. The stream is full of small fish.
The bridge mentioned by Burckhardt was situated near the nymphaeum and its remains were visible until 1947. 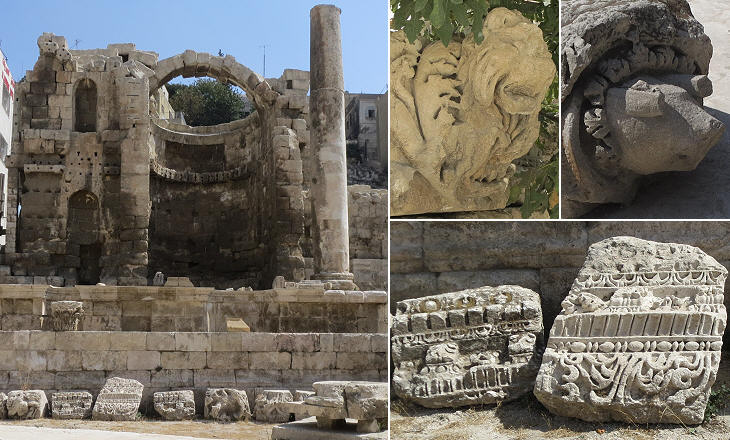 Nymphaeum: (left) main niche; (right) details of decorated stones (another one can be seen in the image used as background for this page)

The nymphaeum, as well as the other remaining monuments of ancient Philadelphia, is dated IInd century AD, a period of great prosperity for the region and the whole of the Roman Empire. The town was part of Decapolis, a loose federation of ten towns to which the Romans granted some degree of self-government. It included Damascus and Canatha (Qanawat) in Syria, Scythopolis (Bet She'an) in Israel, Pella, Gadara (Umm Qays), Gerasa (Jerash) and some minor towns in Jordan. 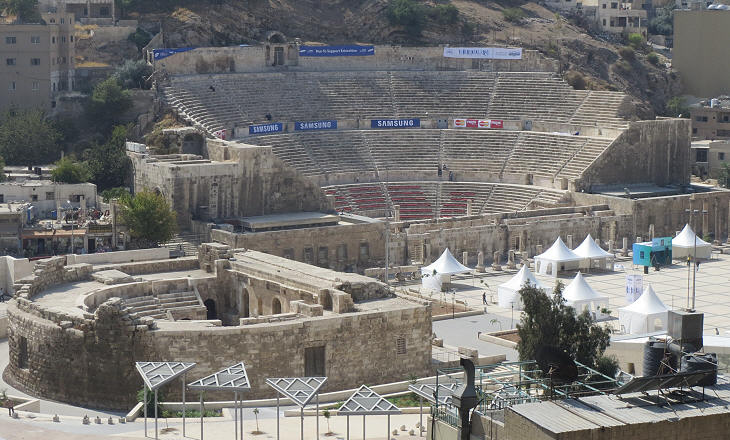 Theatre and Odeon seen from the road to the Citadel

On the south side of the river is a fine theatre, the largest that I have seen in Syria.
The Roman Theatre of Amman retains its entire cavea (seating area) which was traditionally divided into three sections: ima cavea, the lowest one which was reserved to magistrates and to wealthy citizens; media cavea, the middle section, and summa cavea, the highest section, were probably utilized for a gender separation with men seating in media cavea and women and children in summa cavea. It has forty rows of seats; between the tenth and eleventh from the bottom occurs a row of eight boxes or small apartments, capable of holding about twelve spectators each; fourteen rows higher, a similar row of boxes occupies the place of the middle seats, and at the top of all there is a third tier of boxes excavated in the rocky side of the hill, upon the declivity of which the theatre is built. On both wings of the theatre are vaults.
The "boxes" Burckhardt noted here and at the Southern Theatre of Jerash are no longer identifiable in the current building, which has been partially reconstructed to make it safely accessible by modern audiences. You may wish to see some well preserved Roman theatres at Aspendos in Turkey and Orange in France. 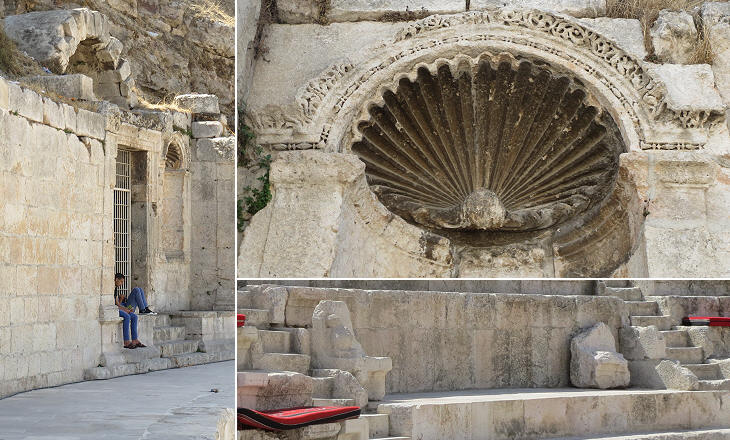 Theatre: (left) niches at the top of the cavea; (right-above) decoration of one of the niches; (right-below) special seats for magistrates in the second row 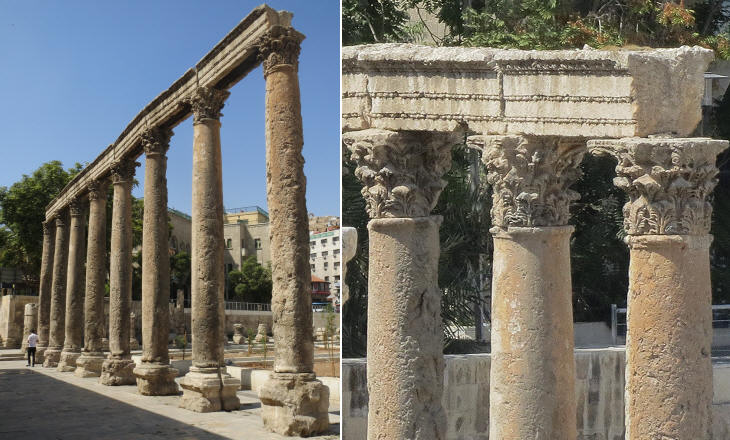 Columns near the theatre

In front was a colonnade, of which eight Corinthian columns yet remain, besides four fragments of shafts; they are about fifteen feet high, surmounted by an entablature still entire. This colonnade must have had at least fifty columns; the workmanship is not of the best Roman times.
Excavations have led archaeologists to believe that the columns were part of the forum of the town, a large rectangular square flanked by porticoes. 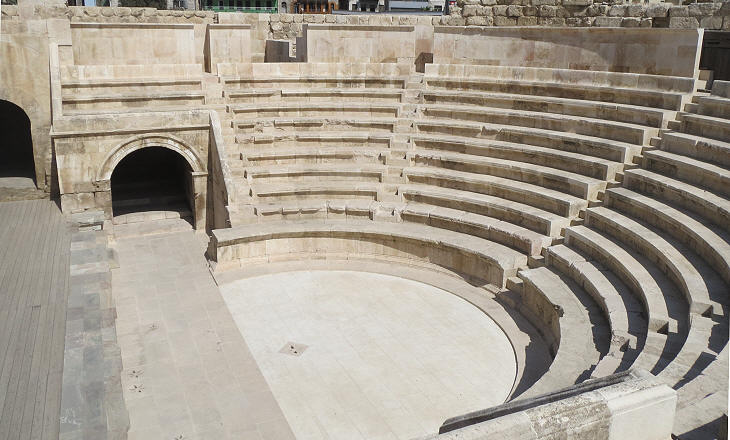 Odeon - h in the plan

Near this theatre is a building (h), the details of which I was not able to make out exactly; its front is built irregularly, without columns, or ornaments of any kind. On entering I found a semi-circular area, enclosed by a high wall in which narrow steps were formed, running all round from bottom to top. The roof, which once covered the whole building, has fallen down, and chokes up the interior in such a way as to render it difficult to determine whether the edifice has been a palace, or destined for public amusements.
The building described by Burckhardt was no doubt an odeon, a small covered theatre which was used for music and poetry contests. 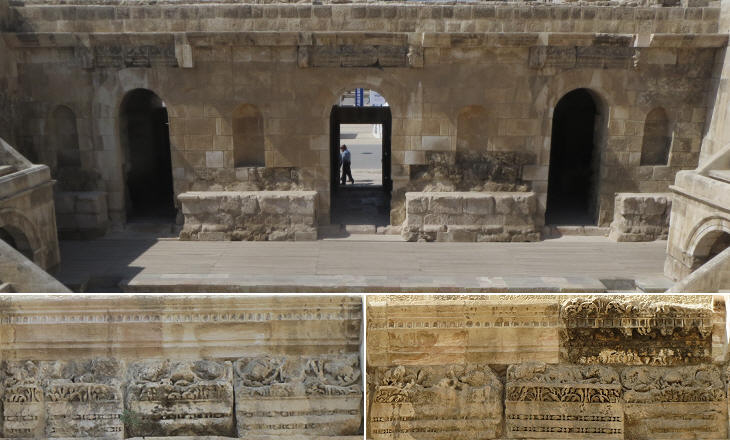 Odeon: (above) stage; (below) details of the proscenium, the wall behind the stage

The inside of the front wall, as well as the round wall of the area, is richly ornamented with sculptured ornaments.