- Mount Nebo and the Dead Sea
(left: J. L. Burckhardt in Arab attire in a XIXth century engraving; right: the Treasury of Petra)

July 14th, 1812 - Having crossed the river we ascended the steep side of the mountain Houma, at the top of which we saw the summit of Djebel Attarous, about half an hour distant to our right; this is the highest point in the neighbourhood, and seems to be the Mount Nebo of the Scripture. On its summit is a heap of stones overshaded by a very large wild pistachio tree.
J. L. Burckhardt - Travels in Syria and the Holy Land - 1822 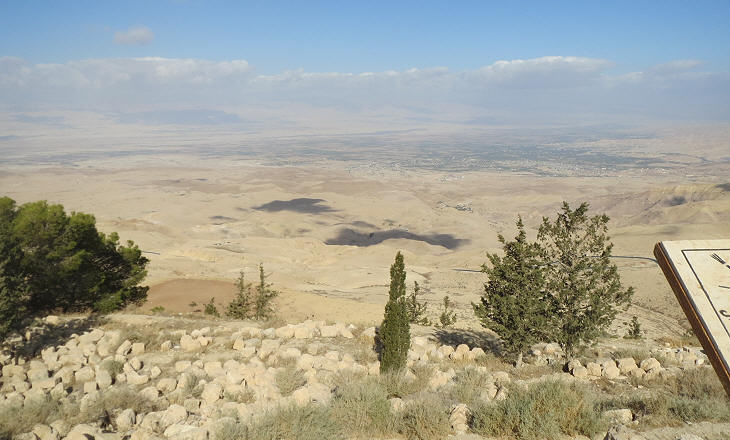 Burckhardt did not elaborate further on Mount Nebo. He was on his way to Petra and Mount Nebo was not along his route.
Then Moses went up from the plains of Moab to Mount Nebo, to the top of Pisgah, which is across from Jericho. And the Lord showed him all the land of Gilead as far as Dan, all Naphtali and the land of Ephraim and Manasseh, all the land of Judah as far as the Western Sea, the South, and the plain of the Valley of Jericho, the city of palm trees, as far as Zoar. Then the Lord said to him, "This is the land of which I swore to give Abraham, Isaac, and Jacob, saying, "I will give it to your descendants." I have caused you to see it with your eyes, but you shall not cross over there." So Moses the servant of the Lord died there in the land of Moab, according to the word of the Lord.
Deuteronomy 34 - New King James Version
Although Nebo had escaped modern research until 1864, the name and place were well known to early Christian writers. (..) Anxious to verify exactly the view of Moses, we paid three visits to Nebo; but we were not fortunate. (..) On each occasion there was a haze from the heat, which dimmed the distant features and outlines, producing a sort of mirage, which rendered it most difficult clearly to trace distant objects.
Henry Baker Tristram - The Land of Moab - 1873
The Franciscans have built a Memorial to Moses on Mount Nebo. Their Archaeological Institute which has conducted extensive researches in the area state in their website: On very clear days the unaided eye can pick out Bethlehem and not far from there the singular cone that was Herod's fortress of Herodium and the towers and buildings of Jerusalem from the Mount of Olives. Modern mosaic at the Roman Catholic Shrine of the Decollation of St. John the Baptist at Madaba near Mount Nebo: it shows a) the River Jordan emptying into the Dead Sea; b) the fortress of Machaerus, where St. John was beheaded; c) Jerusalem; d) Mount Nebo

Mount Nebo does not remind travellers of Moses only, because from its peak one can see sites related to the life of St. John the Baptist: the Jordan where he baptized Jesus and Machaerus, where he was imprisoned and executed, which stands a few miles south of Mount Nebo. It was a fortress built by King Herod the Great which was eventually torn down by the Romans in 72 AD during the First Jewish Revolt. The head of St. John is a relic worshipped by Muslims too at the Great Mosque of Damascus. 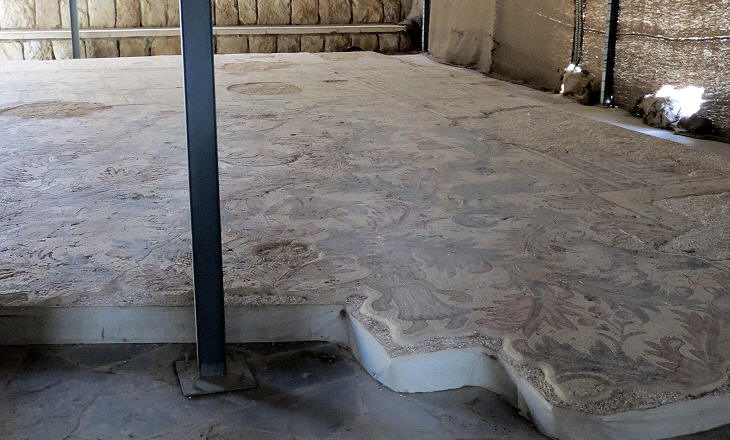 VIth century mosaic of a church built on Mount Nebo

Franciscan archaeologists found remains of a Byzantine monastery and of its church during the construction of the Memorial. The buildings date IVth-Vth century, but they were modified in the VIth century, so that there are floor mosaics of three phases of construction. At the time of my visit (October 2013) some of these mosaics were undergoing restoration and an elaborate mosaic had been temporarily removed from its original location and sheltered outside the Memorial. 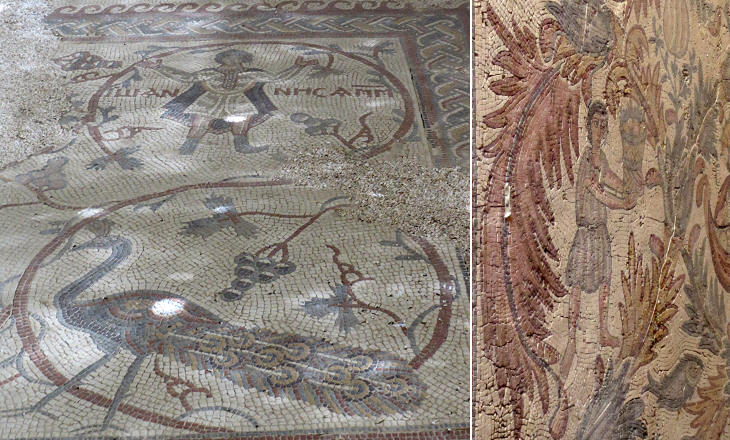 The central panel of the mosaic depicts an elaborate vine shoot surrounding men and women busy at various farming activities. Other panels portray donors or Christian symbols such as the peacock (Resurrection). Inscriptions have provided information on the donors and the authors of the mosaic. See similar Christian floor mosaics at not far away Umm ar-Rasas. 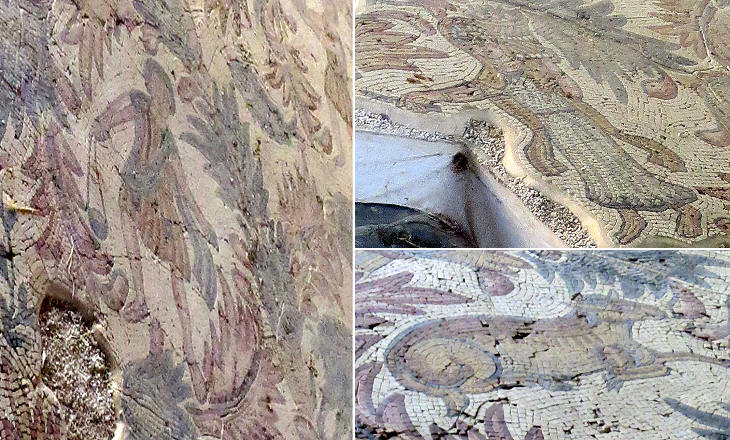 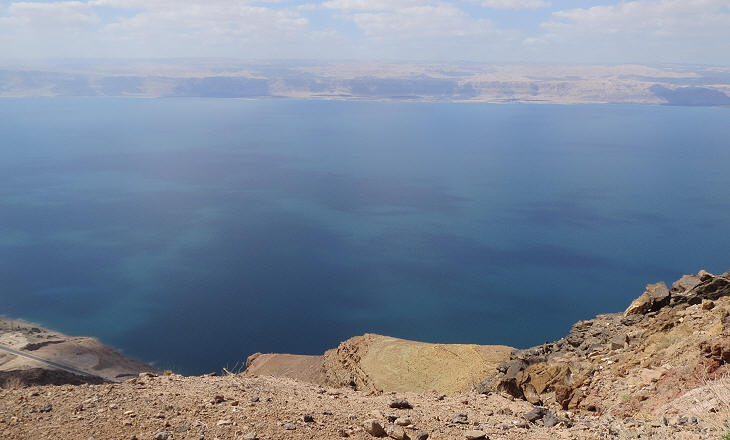 We found the hills, which are of white stone, higher the nearer we approached the Dead Sea. At length we came to the steep rocky cliffs that hang over it, and make a most dreadful appearance; the descent was very difficult, and we were obliged to leave our horses, in order to get to the banks of the Dead Sea.
Richard Pococke - A Description of the East and Some Other Countries - 1745
Only the northern end of the Dead Sea is visible from Mount Nebo, but another natural balcony a few miles south has a very fine view over its dark waters and its western shore (you can see the southern part of the Dead Sea in a page covering Masada). 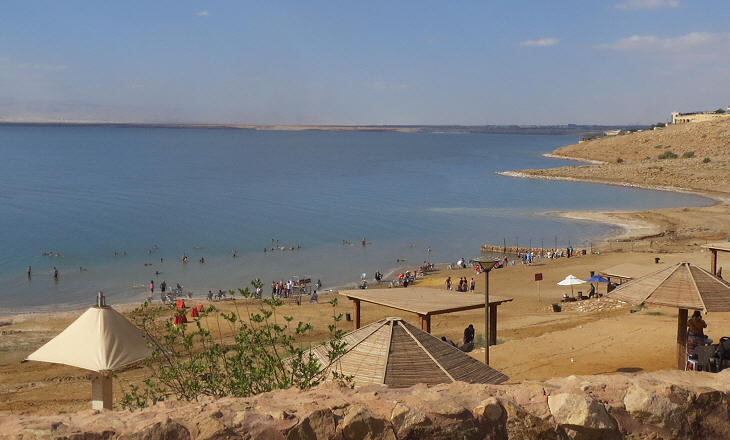 The little river of the Callirrhoe is here, indeed, "fair-flowing," completely buried in oleanders, under which, with difficulty, we pushed our horses, over the recent tracks of wild boar. Emerging on the other side, we rose a few feet into a little plain, knee-deep in herbage, buried in an amphitheatre of hills, a lovely tenting spot. By common consent this was the queen of camps, far beyond any we had yet enjoyed. We had descended 1400 feet to-day. The air was balmy, yet not sultry, for we were still high. A pool was soon found, completely covered by oleanders, where we had a delicious bath, the water being deep enough for a header from the rocks, and a good swim afterward. Tristram
In antiquity the shores of the Dead Sea were not as barren as they are today. Kallirhoe is a town on the Dead Sea mentioned by Flavius Josephus because King Herod the Great went to its hot baths during his last days hoping to recover from his diseases. Archaeologists have found evidence of a villa and a harbour. 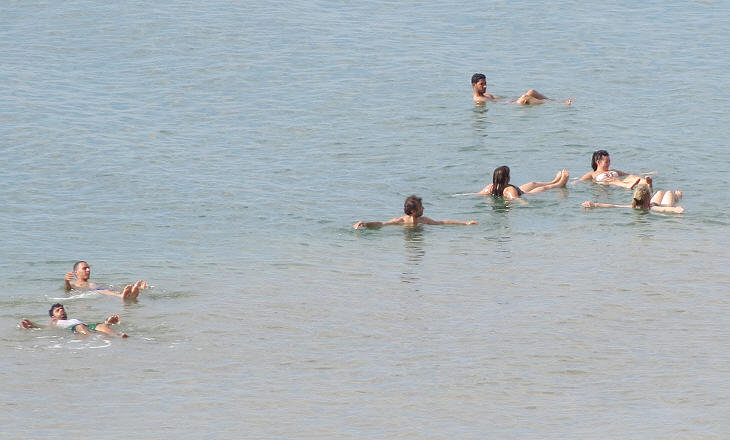 The main reason why tourists are eager to bathe in the Dead Sea ...

The Greeks called Lake Asphaltitis the Dead Sea, due to the natural surfacing of asphalt.
The nature of the Lake Asphaltitis is also worth describing. It is, as I have said already, bitter and unfruitful. It is so light [or thick] that it bears up the heaviest things that are thrown into it; nor is it easy for any one to make things sink therein to the bottom, if he had a mind so to do. Accordingly, when Vespasian went to see it, he commanded that some who could not swim should have their hands tied behind them, and be thrown into the deep, when it so happened that they all swam as if a wind had forced them upwards.
Flavius Josephus - The Wars of the Jews - Book 4:8 - Translation by William Whiston.
I was much pleased with what I observed of this extraordinary water, and stayed in it near a quarter of an hour; I found I could lay on it in any posture without motion, and without sinking; it bore me up in such a manner, that when I struck in swimming, my legs were above the water, and I found it difficult to recover my feet. Pococke ... but locals do prefer the pool