- "Castles" in the Desert
(left: J. L. Burckhardt in Arab attire in a XIXth century engraving; right: the Treasury of Petra) 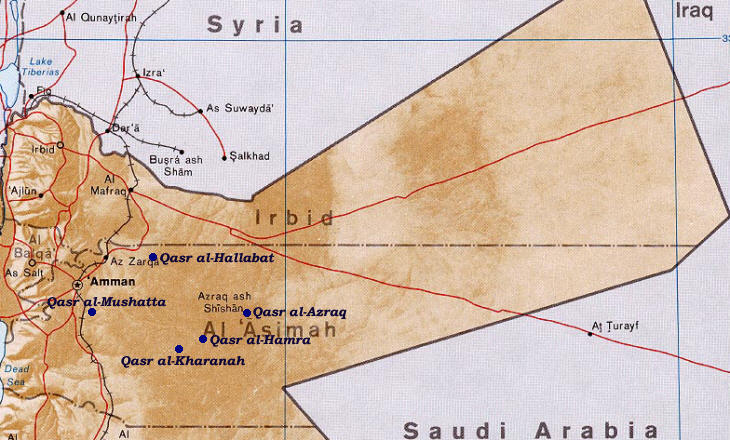 Map showing the approximate location of the five "castles" (qasr)

The "castles" are so called because they all have the appearance of a fortification as they are surrounded by walls with towers, but some of them were meant to be temporary residences where the Umayyad Caliphs received the leaders of Bedouin tribes or from where they went hunting. The most famous Umayyad "Desert Castle" is Qasr al-Hayr al-Sharqi (Western Castle) in Syria, sixty miles east of Palmyra.
J. L. Burckhardt did not visit the locations covered in this page as they were too far from his route to Egypt. 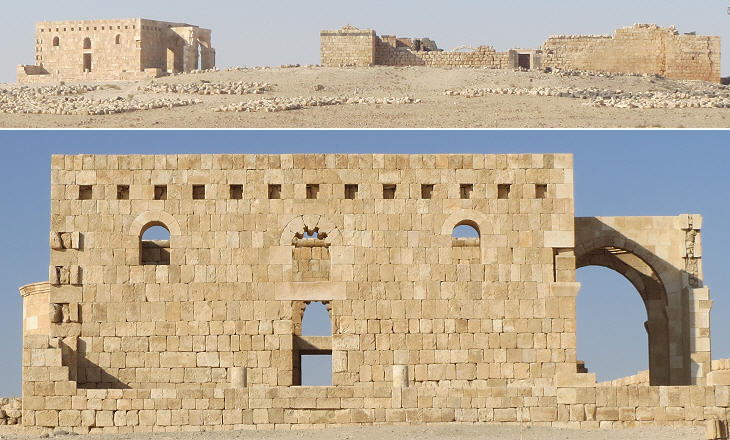 (above) The castle (right) and the nearby mosque (left); (below) the mosque

Qasr al-Hallabat was built as a leisure residence by the Umayyads on the site of a small Roman fort. A 212 AD inscription which mentions a novum castellum (new castle) suggests the fort was built during the reign of Emperor Caracalla, however, because the Umayyads brought in materials from other ancient sites, the inscription does not necessarily refers to Qasr al-Hallabat.
Usually mosques are inside the enclosure surrounding the main building, but at Qasr al-Hallabat, the mosque was placed outside the walls, as if its presence would have been in contrast with what was going on in the castle. 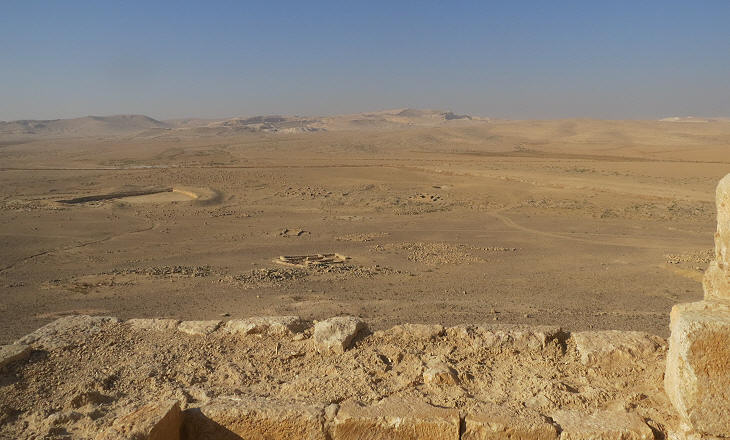 View westwards from the castle

The first descriptions of Qasr al-Hallabat are included in Howard Crosby Butler's architectural survey, conducted in January 1905 and published in 1913. The castle is situated on an isolated low hill which enjoys a commanding view in all directions. Notwithstanding the barren landscape shown in the image it is likely that the area to the west of the castle was farmed, at least until the VIIIth century. In 793-796 a series of conflicts among Arab tribes who had moved to Palestine and Transjordan had a devastating effect on the security of the region and on farming. 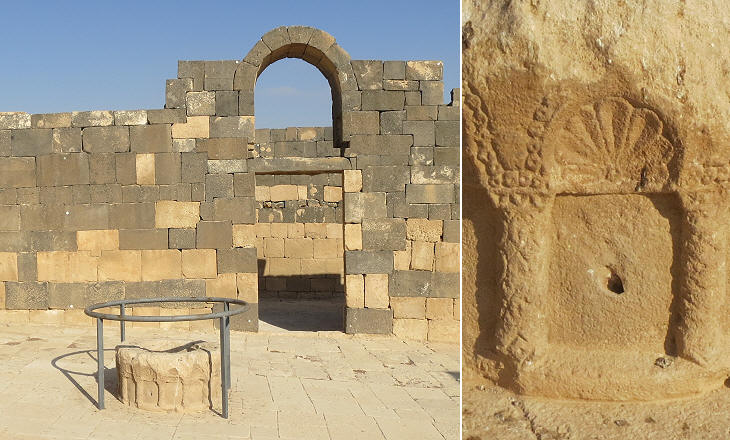 (left) Main courtyard of the castle; (right) detail of the well

During the Umayyad period the castle underwent a major, almost total, renovation, and became the main building of a wider complex which included a mosque, baths, agricultural enclosures, dams, reservoirs, cisterns and water systems. The earlier structure was totally rebuilt on the same plan as the previous castle, and then the interior was redecorated. The castle was structured around a large courtyard and it had an elaborate system for capturing rainfall inside underground cisterns which conveyed water to a well. A system of sluices has been found outside the castle in what was an agricultural enclosure. Excavations in the 1980s have enearthed remains of very high quality mosaics with animal, human, floral and geometric motifs, as well as frescos and carved stucco with floral and animal designs and carved stones. Almost all the rooms were decorated with mosaics which included the depiction of human beings. They recall those of late Byzantine churches such as St. Stephen's at Umm ar-Rasas. According to some scholars these mosaics were an attempt to utilize a local deeply rooted tradition in an Islamic context, similar to what the Umayyads had done at the Great Mosque of Damascus. 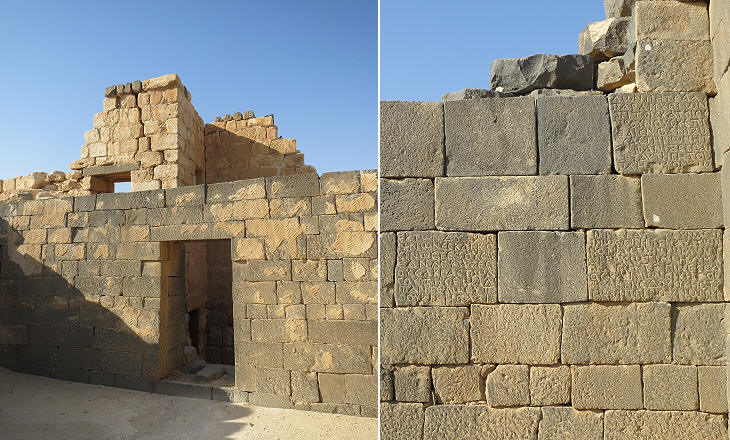 The castle is built with a local limestone, but basalt stones were used for the towers. They came from Hauran, a region north of Qasr al-Hallabat and most likely from Umm al-Jimal, a town entirely built with basalt. 146 stones bear Greek inscriptions: most of them are part of the Edict of Anastasius I, Byzantine Emperor in 491-518, a document dealing with the military administration of the frontier provinces. 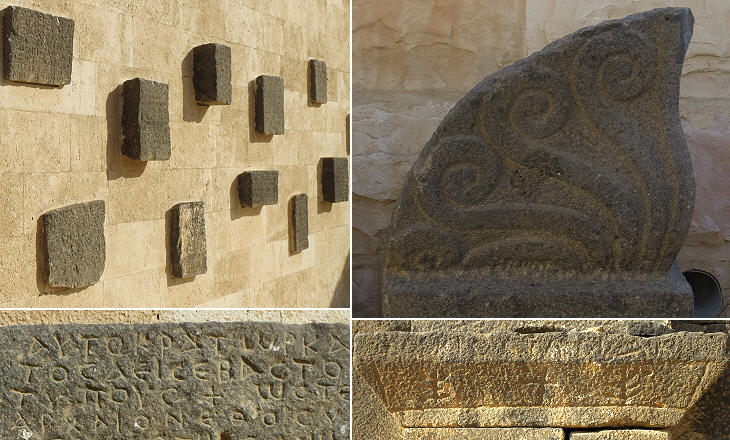 Illustration from "The Land of Moab" by Henry Baker Tristram - 1873

February 26th 1872 - Suddenly drawing rein in front of Mashita, after a headlong dash at a herd of gazelle across the hadj road, we were astonished at the unexpected magnificence of the ruins, unknown to history, and unnamed in the maps. It has evidently been a palace of some ancient prince. There is no trace of any town or buildings round it. The only remains outside the walls are those of a deep well near the south-west corner. It must have stood out on the waste in solitary grandeur, a marvelous example of the sumptuousness and selfishness of ancient princes. Tristram 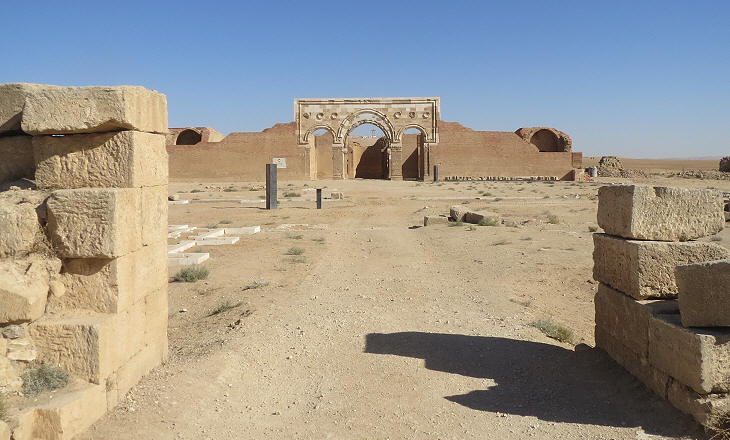 View from the former gateway

It is on the south face that the resources of Eastern art have been most lavishly expended. There are here six bastions, besides the corner ones; for the fretted front, which extends for fifty-two yards in the centre of the face, has a bold octagonal bastion on either side of the gate-way. This gate-way is the only entrance to the palace. (..) One thing struck us much - the very small amount of debris strewn about. (..) The appearance of the stones is rather that of unused material than of crumbling ruin. (..) The state of the external sculptured façade proves that it was never finished. Tristram
This palace deserves attention because its design is an interesting example of the passage from classic to Islamic architecture. According to tradition it was built by Umayyad Caliph Walid II and it was never finished as the Caliph was killed after only one year in charge.
The overall design recalls Qasr al-Hayr al-Sharqi as it had a pool at the centre of the courtyard and a mosque near the entrance. You may wish to see Anjar, an Umayyad town in Lebanon. 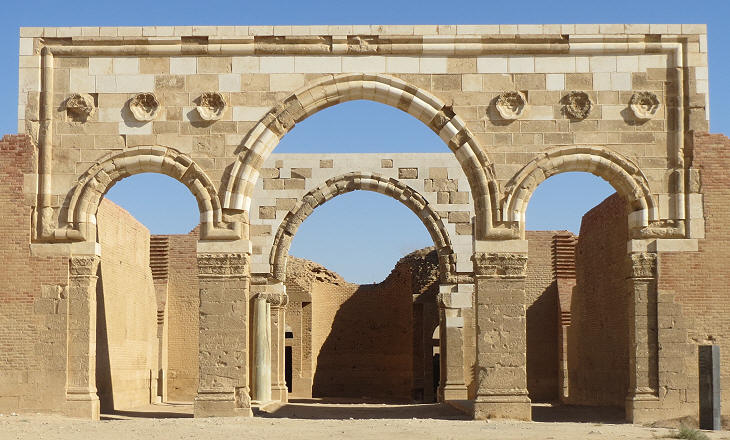 The northern and innermost block of the central parallelogram is entirely occupied by the residence itself. The entrance presents a façade divided into three equal parts, the centre composed of a wide central gate-way and two side doors. These have consisted of three archways supported by massive columns of white, hard stone, almost marble, surmounted by debased Corinthian capitals. The voussoirs of the arches have all fallen to the ground, but in perfect order, evidently overthrown by an earthquake, which has shivered the columns. Tristram
Caliph Walid II had a very poor reputation among the most pious Muslims because of his dissolute lifestyle and his drinking. The design of the main hall of the palace, which most likely was where the Caliph had in mind to place his throne, indicates he regarded himself as a Byzantine emperor, disregarding the Muslim call for simplicity. The hall is divided into three naves, it is preceded by an arch and it ends with an apse, all features which can be found in early churches as at S. Prassede in Rome. 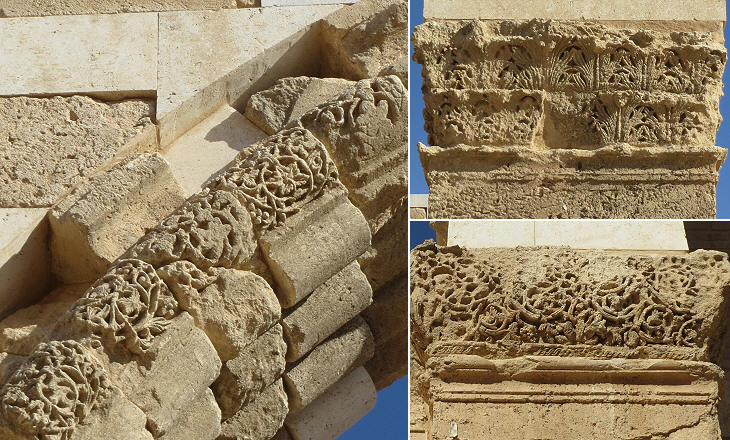 Every inch of their surface, and all the interstices, are carved with fretted work representing animals, fruit; and foliage, in endless variety. (..) There are upward of fifty animals, in all sorts of attitudes, but generally drinking together on opposite sides of the same vase - lions, winged lions, buffaloes, gazelle, panthers, lynx, men. Tristram
The decoration of the hall was entrusted to Byzantine sculptors and it recalls similar works at Qalb Lozeh and St. Simeon's Martyrion in Northern Syria. These sculptors used drills much more than chisels. The decoration of the external façade included mythological animals and human beings. Some of the animals belonged to the Persian tradition which initially led to attributing the palace to Sassanid King Khosrau II who invaded the country in the early VIIth century. 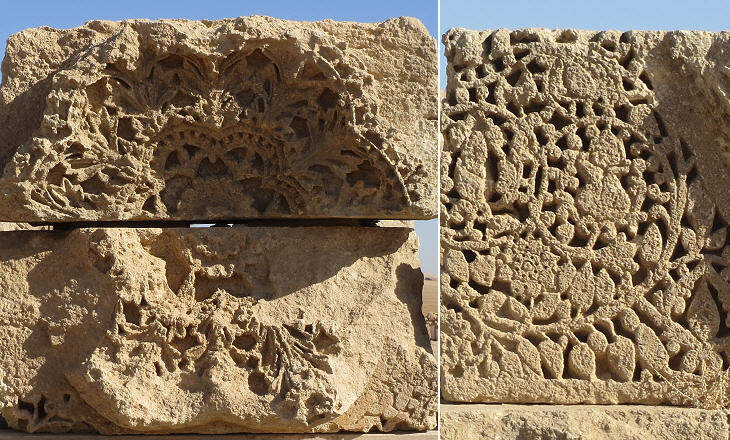 Details of the reliefs on fallen architectural elements

The richness of the arabesque carvings, and their perfect preservation, is not equaled even by those of the Alhambra, though in somewhat the same style. Tristram
A significant section of the remaining decoration of the entrance to the enclosure (it opens in a separate window) was given to German Emperor Wilhelm II as a gift from Ottoman Sultan Abdul Hamid II just before World War I and today it is on display at the Pergamon Museum in Berlin. 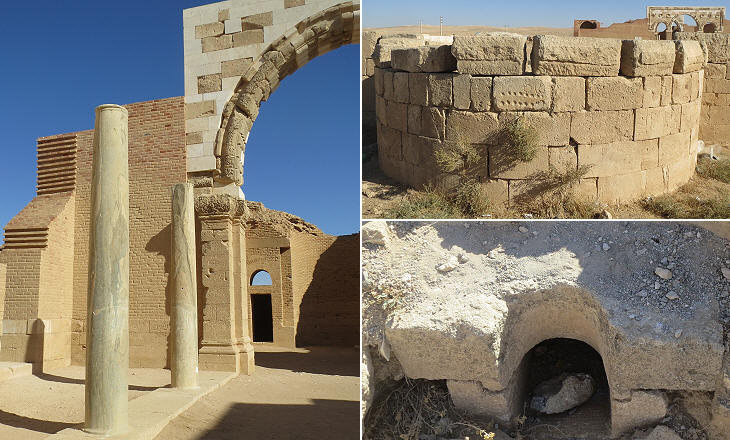 (left) "Cipollino" columns (taken from a Roman building, perhaps the Temple to Hercules at Amman); (right-above) one of the small towers with a stone with cavities for a betting game; (right-below) a latrine in one of the towers behind the main hall

The bricks, of which, above three courses of stone, the whole of the residential portion of the palace is constructed, differ from any we met with before or since. (..) These tiles are square and flat, of the shape of Roman tiles, but much thinner and larger, about three inches thick and perhaps eighteen inches square. The three courses of stone continue, covered with inscriptions, all round the building; but within, the whole superstructure is of brick, excepting the pilasters and cornices, with the large stones in the angles, from which the vaulting of the roof springs. Tristram
An interesting feature of the palace is that it was partly built with baked bricks, something which was rarely done in Jordan, but was typical of Roman construction techniques, not only in Rome (you might wish to see the Temple to Serapis in Pergamum).