April 28th, 1812 - It had been my wish to visit the ruined city of Om El Djemal, which is eight hours distant from Boszra, to the S.; but the demands of the Arabs for conducting me thither were so exorbitant, exceeding even the sum which I had thought necessary to bring with me from Damascus to defray the expenses of my whole journey, that I was obliged to return to Aaere (a village near Suweida, the main centre of the region) towards mid-day, after having offered thirty piastres for a guide, which no one would accept.
J. L. Burckhardt - Travels in Syria and the Holy Land - 1822 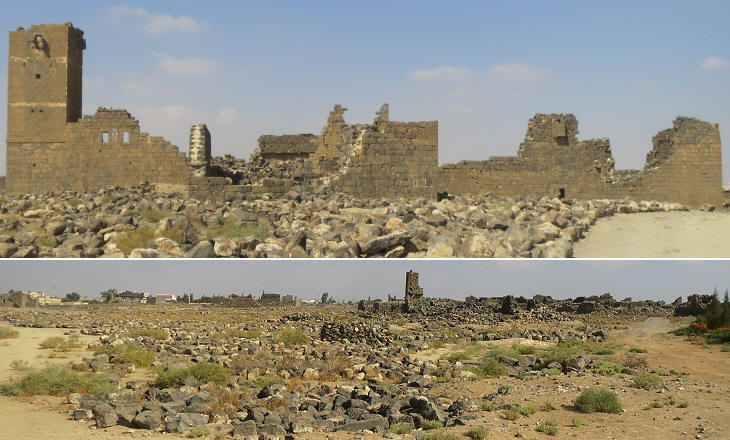 (above) View of the "Barracks"; (below) overall view of the town

Umm al-Jimal is situated very near the border between Jordan and Syria. Its name means "Mother of Camels" in Arabic. Burckhardt reports that the Bedouins living in the Hauran region had many camels: The first harvest is that of horse-beans at the end of April: of these there are vast tracts sown, the produce of which serve as food for the cows and sheep. Camels are fed with the flour made from these beans, mixed with barley meal, and made into a paste.
The first recorded visit to the site was by William John Bankes who wrote a brief description of Umm el-Jimal in 1818. The first significant studies of Umm al-Jimal are Howard Crosby Butler's architectural survey, conducted in January 1905 and published in 1913. 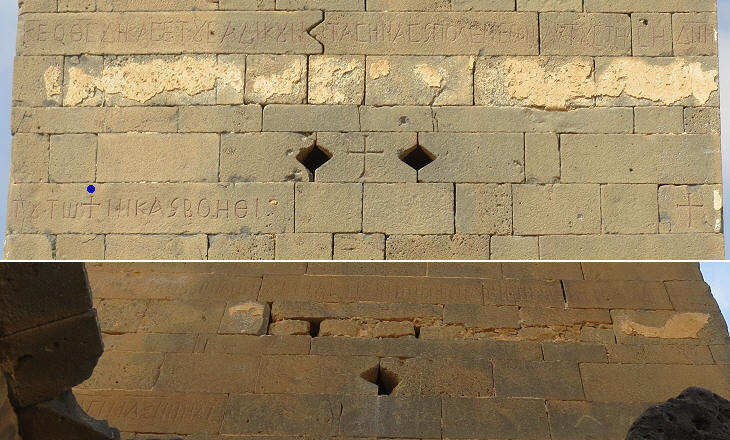 Inscriptions on the tower of the "Barracks" including "En Toutoi Nika" at the sides of a cross (blue dot), the Greek words for "In hoc signo vinces" the vision Emperor Constantine had before the Battle of Ponte Milvio

Umm al-Jimal was a Nabatean town which was acquired by the Romans in 106 AD. An inscription found near the site of a lost gate indicates that the walls of the town were strengthened during the reign of Emperor Commodus. In the early IVth century it became one of the forts which protected Limes Arabicus the desert frontier of the Roman Empire. These forts were mainly built at the initiative of Emperor Diocletian. Other fortifications along the frontier can be seen at Palmyra, at Qasr al-Azraq and at ar-Rabbah on the road to Petra. 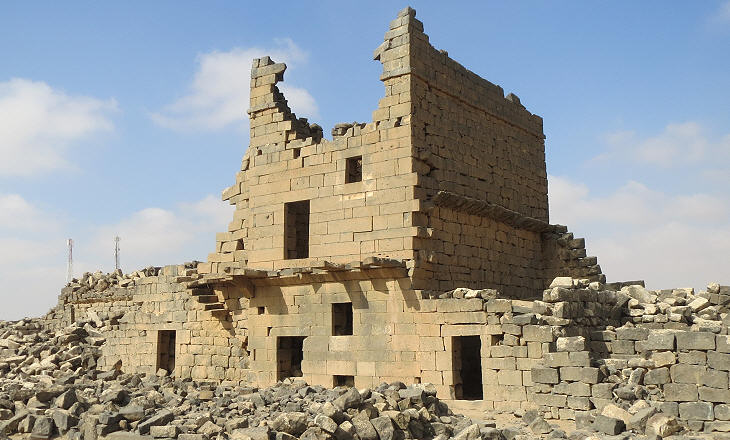 Building inside the "Barracks" (thus named because they housed an Ottoman garrison, but in origin they were a Roman fort which was converted into a monastery)

Extensive architectural and archaeological investigation (The Umm al-Jimal Project) began in 1972 with assistance from American foundations and archaeologists. These projects documented the standing remains and archaeological deposits of a settlement that was supported by grain production and livestock husbandry. Some parts of the town, however, retain an aspect which gives the visitor the feeling of being like Burckhardt, i.e. the first person to venture into the rubble of its collapsed buildings. 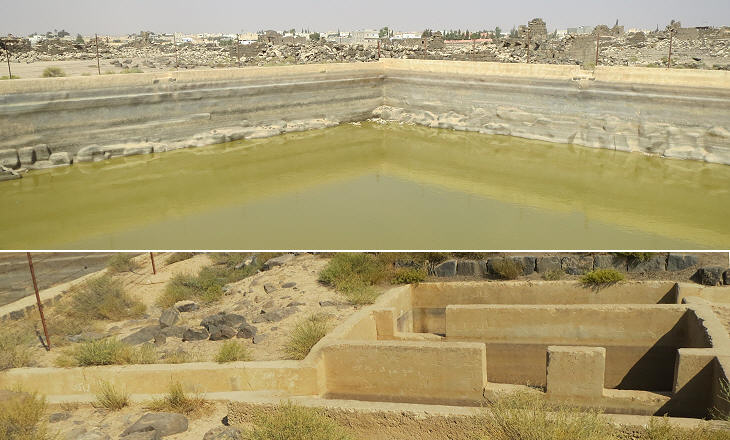 (above) Large rectangular cistern (see that at Bosra); (below) system of small basins for reducing impurities before the water entered the cistern

Umm al-Jimal was situated in a very arid environment and an effective water management system was vital for its inhabitants. The basalt rock upon (and of) which the town was built is highly impervious. This made it easy to store water during winter. The large rectangular cistern at the centre of the town however was only a temporary reservoir because its large surface would have caused significant evaporation during the hot season. Many small underground cisterns have been found near the reservoir and in private dwellings where water was stored for long periods. 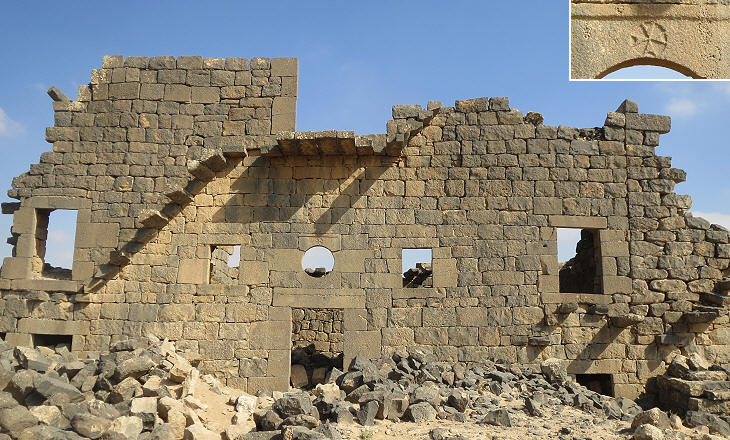 Praetorium; (inset) cross above the round opening

The Praetorium, the residence of the governor of the town and of the tribunals, was built in 371. It is likely that the cross was carved at that time, although the Christian faith was not yet the official religion of the Roman Empire. This occurred after Emperor Theodosius came to power in 379, but the population of many eastern provinces had already entirely converted and had started to pull down temples and build churches. The number of churches and crosses on buildings indicates that the inhabitants of Umm al-Jimal were fervent Christians. 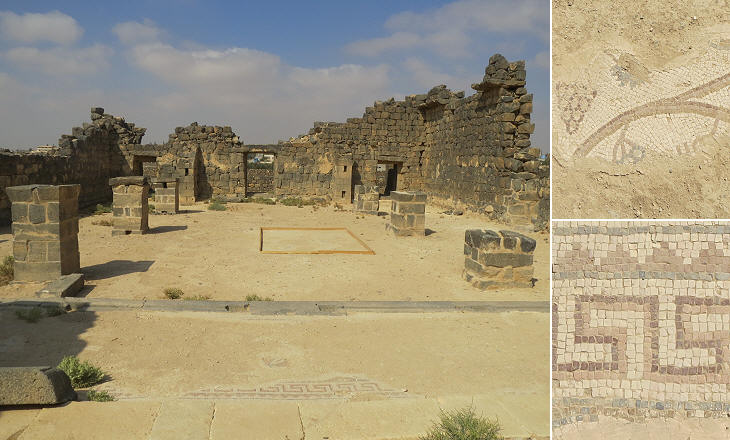 Cathedral and details of its mosaics

In 490 Umm al-Jimal became part of the Ghassanid Kingdom, a buffer state between the Byzantine and the Sassanid (Persian) empires. It was ruled by tribesmen coming from southern Arabia who became Christians and were recognized as foederati (allies) by the Byzantine emperors. In return they granted protection to Byzantine territories from raids by hostile Bedouin tribes and they fought on the side of the Byzantines against the Sassanids. In 566 a large cathedral was built by Al-Harith ibn Jabalah, the Ghassanid king, at Umm al-Jimal. (left) Western Church; (right) detail with a cross surrounded by four circles, a reference to the five wounds of Jesus (for this and other Byzantine crosses see a page on Qalb Lozeh, a church in northern Syria)

In the early VIth century the Ghassanids embraced Miaphysitism, usually considered a form of Monophysitism, a theological position which holds that the nature of Jesus Christ is divine only. This view was regarded as heretical by Byzantine Emperor Justinian, but his wife Theodora protected the Monophysites and it does not appear that the Ghassanids were pressed to abandon their views. Justinian's successors however issued decrees against the Monophysites.
According to Michael the Syrian, who in the XIIth century wrote a chronicle of world events from Adam until his own time, Byzantine Emperor Heraclius stated: No one should appear in my presence who does not hold the Chalcedonian doctrine (that defined at the Council of Chalcedon, a town on the Asian coast opposite Constantinople, in 451). Moreover, let there be no trial for those who kill, rob and persecute [the Monophysites]. And let them not dare to enter the Church cathedral.
Translation by Robert Bedrosian. 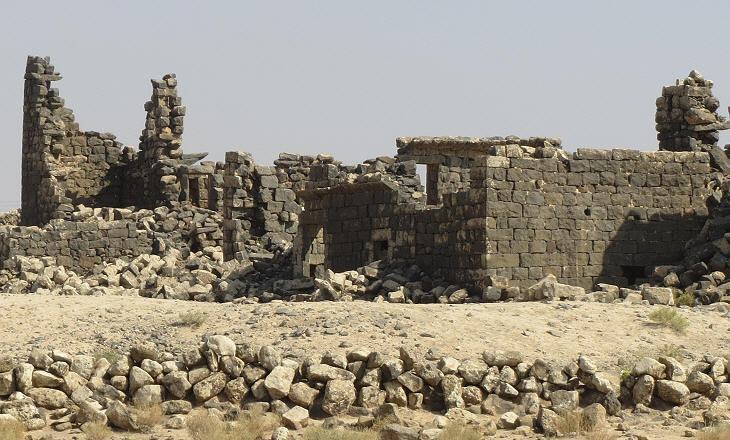 According to archaeologists the town's prosperity in the VIth century is also reflected in many buildings which had three stories in height. Religious rifts among Christians were one of the causes of the success of the Muslims in conquering Palestine, Jordan, Syria and Egypt which were largely Monophysite countries. Most likely the population of Umm al-Jimal continued to be Christian until the town was abandoned in the VIIIth century after a devastating earthquake which struck the region in 747 or 749, because there is not much evidence of its many churches having been turned into mosques as it occurred at Bosra. 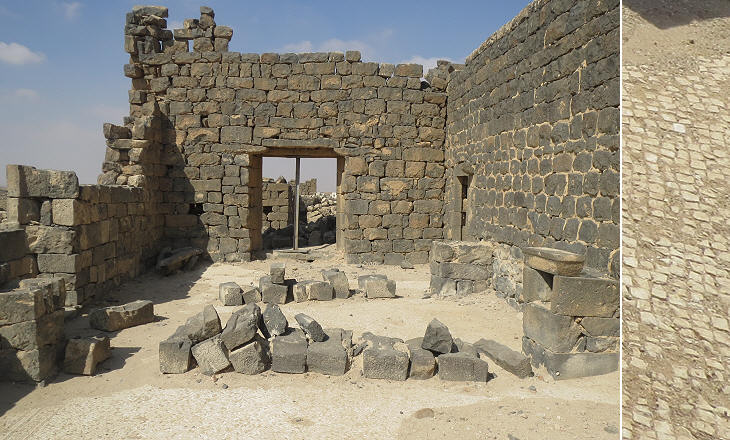 (left) Southern of the twin churches; (right) detail of its floor

Archaeologists believe Umm al-Jimal was used as a basalt quarry for the construction of Qasr al-Hallabat, a small Umayyad residence, and that the long inscription found there came from Umm al-Jimal.
With the end of sedentary occupation, the Late Antique structures at Umm al-Jimal became a resource for pastoral nomads. Bedouin tribes crossing northern Transjordan routinely used the site as a campground, constructing livestock corrals and taking advantage of shelter and whatever rainwater had collected in the reservoirs. This centuries-old, seasonal pattern of land use was altered during the first decades of the 20th century when the site attracted new attention as a strategic resource for Syrian Druze families coming into Transjordan as refugees.
Robin M. Brown - The Druze Experience at Umm al-Jimal: Remarks on the History and Archaeology of the Early 20th Century Settlement
The image used as background for this page shows a cross at the Western Church.