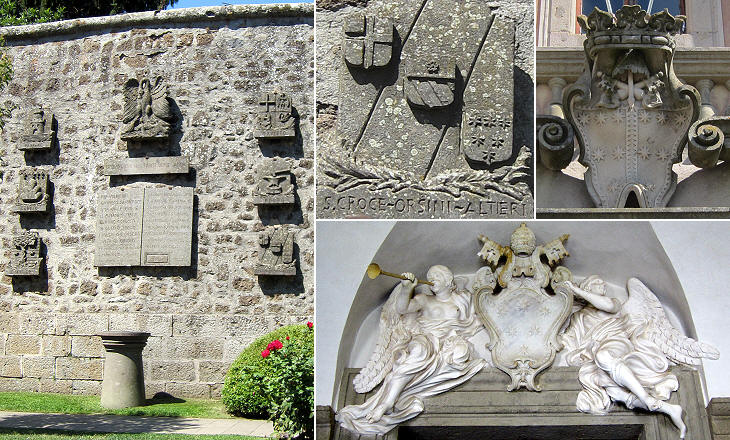 A modern monument on the walls of Oriolo provides a summary of the history of the town: at the centre it has the coat of arms of the town showing a pelican, a heraldic symbol of the Santa Croce (or Santacroce) who founded Oriolo in 1560. The pelican is a symbol of the Crucifixion of Jesus Christ and it can be seen at S. Maria in Publicolis, the Santa Croce church near Piazza Giudia in Rome.
The pelican is surrounded by the coats of arms of the towns from which the first inhabitants of Oriolo came. The Santa Croce bought Oriolo, at the time a small castle surrounded by woods. from the Orsini and they brought in families from Umbria and Tuscany to deforest the area and farm it. Land was leased to the settlers with the obligation to give one fifth of the crops to the Santa Croce.
The monument includes a reference to the Altieri who acquired Oriolo in 1671. 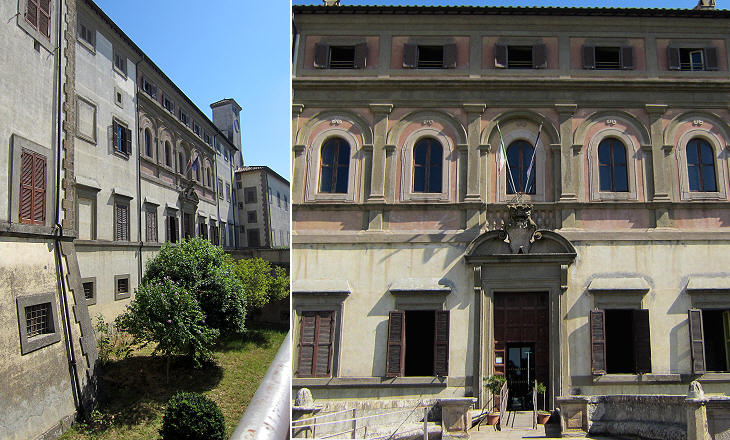 Oriolo was returned to the Orsini in 1606 and in 1671 it was sold to Gaspare Albertoni Paluzzi, husband of a niece of Pope Clement X. The Pope gave him the title of Prince of Oriolo and asked him to change his surname to Altieri, that of the Pope who did not have male nephews. The palace built by the Santa Croce was redesigned by the Altieri. It is a complex building which seen from different angles appears as a town palace, a villa, a fortress and even a farm. 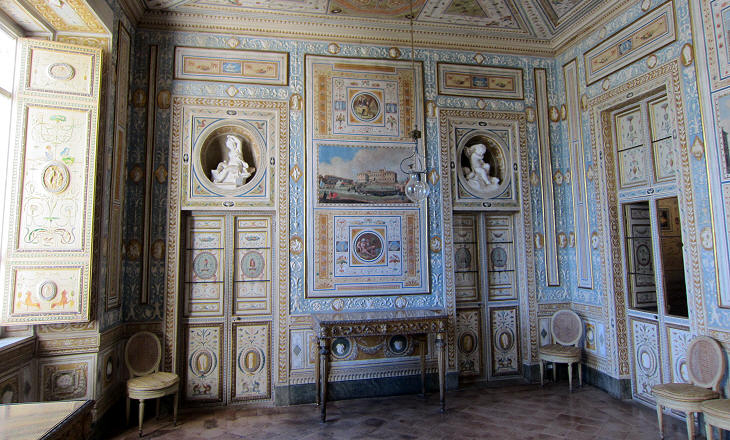 The palace is today a State museum having as its main attraction a long gallery which the Altieri decorated with portraits of the popes (of limited or no artistic value). The most interesting part of the palace is a series of small halls with an elaborate XVIIIth century decoration which includes views of fiefdoms belonging to the Altieri such as Canale Monterano, Vejano (Viano) and Monterosi which are situated a short distance from Oriolo. 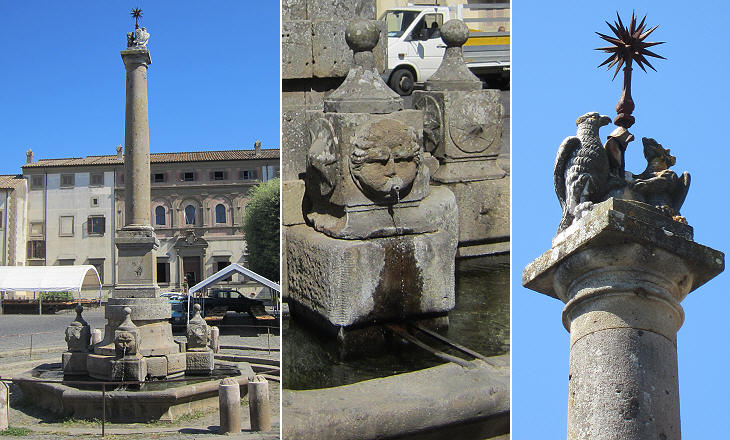 (left) Main fountain; (centre) detail of the fountain showing Levant, the easterly wind; (right) heraldic symbols of the Altieri (star) and of the Borghese (eagle and dragon)

The Altieri consolidated their position in the Roman aristocracy by establishing ties with families who had a more prestigious background. Prince Emilio Carlo Altieri married Livia Borghese and in 1782 he placed her heraldic symbols on the main fountain of Oriolo. Princess Livia Borghese was a key figure of Roman society and books and opere buffe (comic operas) were dedicated to her. 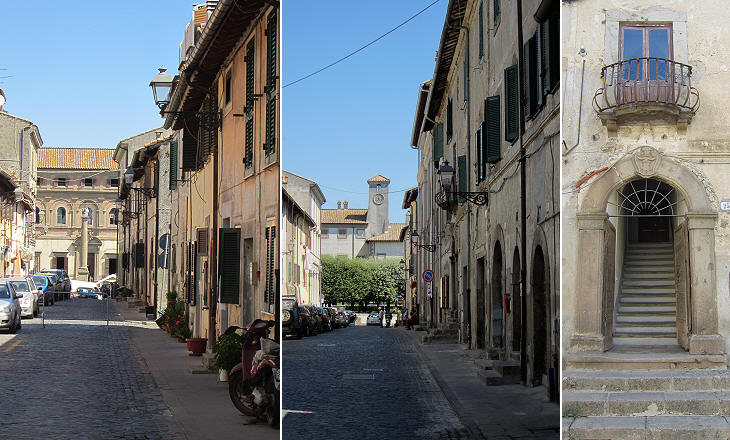 For many years the settlers brought in by the Santa Croce lived in huts, but eventually Oriolo became a small town with a clearly planned layout based on three parallel streets leading to the main square. Although most of the inhabitants of Oriolo were farmers or servants of the Altieri and they lived in identical small houses, over time some families acquired a more important status which shows up in a few decorated buildings. 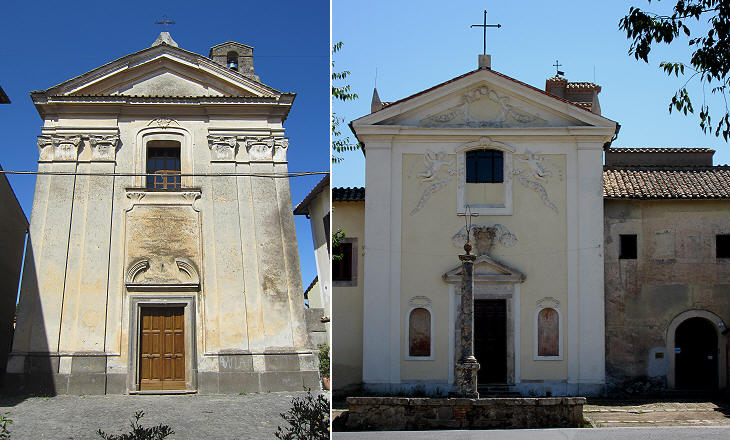 A church was built by the Altieri along the branch of Via Cassia which runs outside the walls of Oriolo. It was enlarged and modified in the XXth century, whereas S. Anna, a small church inside the walls, has retained its XVIIIth century appearance. The Altieri promoted the construction of a church for the Franciscans who had a small monastery on the road to Manziana. Its façade was decorated with stuccoes, although the Franciscans usually preferred to have rather bare churches in line with their vow of poverty. 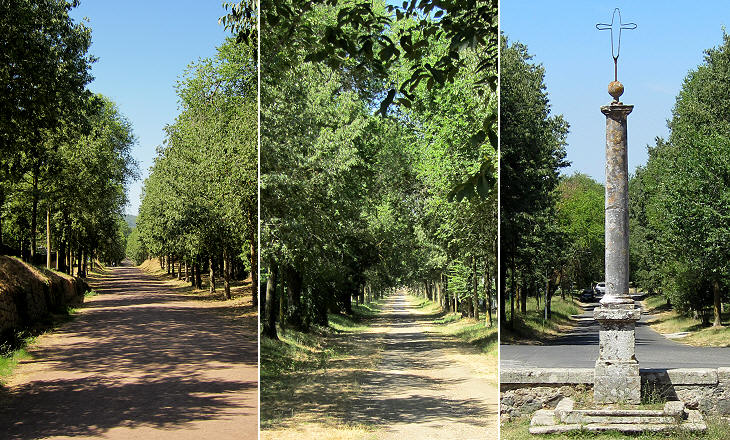 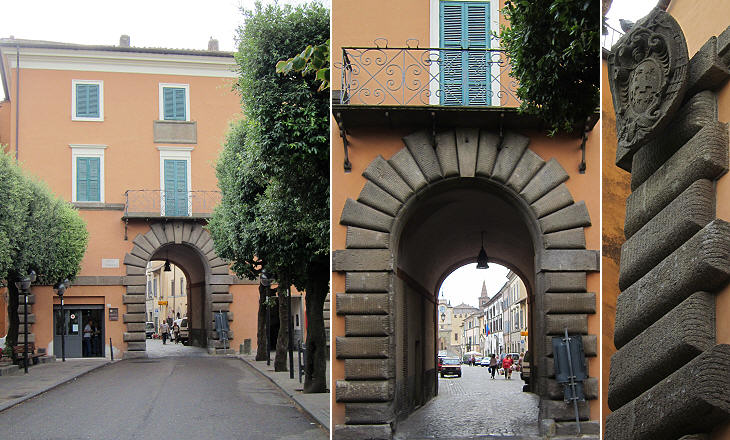 Porta S. Antonio and coat of arms of Cardinal Cinzio Aldobrandini. governor of Capranica in 1594-1608 and nephew of Pope Clement VIII (you may wish to see his tomb in S. Pietro in Vincoli)

Capranica is located at the junction of two small streams which have deeply cut soft volcanic rocks and have created a long and narrow hill.
The oldest part of Capranica is located at the junction of the two streams and the town gradually expanded along the hill. Porta S. Antonio is the outer gate of Capranica. The building it crosses has been modernised, but the design of the gate has not been modified. The inscription above the entrance was placed by Pope Urban VIII in 1641 and it celebrates improvements made to Via Cassia. 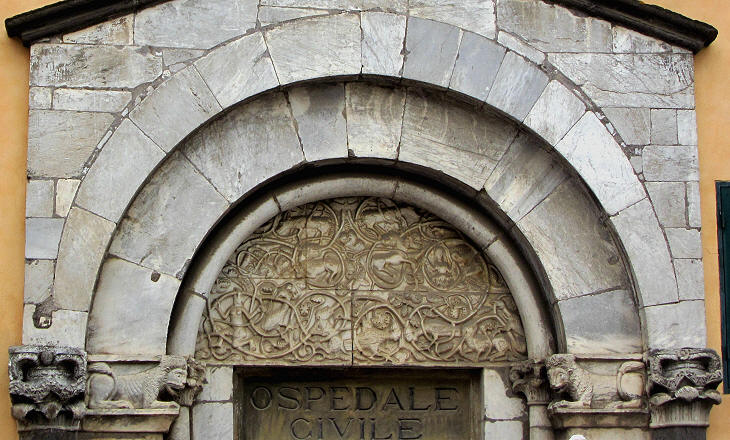 The section of Capranica between the outer and the inner gates was called Borgo, a word which indicates a settlement outside a walled town. Pilgrims reaching Rome through Via Francigena (as Via Cassia was called in the Middle Ages) passed by Capranica on their way to Sutri. A hospital/hostel was built for them in the XIIIth century. The building has been modified several times, but it retains a portal with an unusual relief, showing men and animals framed by vine-branches; its meaning is obscure. 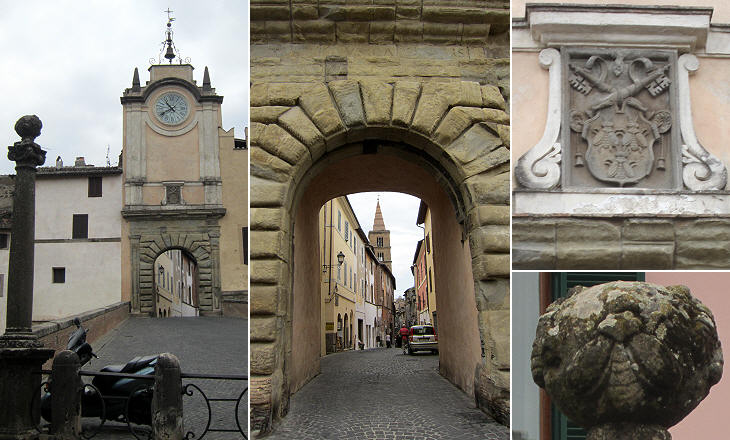 The oldest part of Capranica was called Castello, after a castle built by the Anguillara, a powerful family who possessed many fiefdoms around Lake Bracciano, including one named after them.
The castle was pulled down in 1484 by Pope Sixtus IV after the town had passed under the direct control of the Papal State. The gate leading to the castle was redesigned in the XVIIth century. 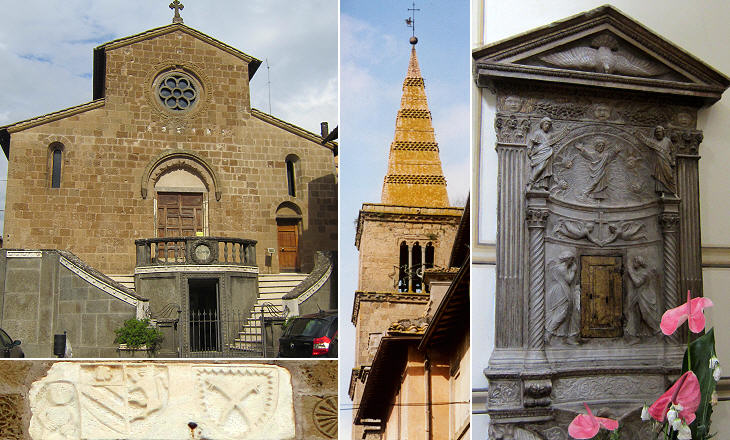 Capranica retains some churches of its medieval past which are aligned along the street which crosses the whole town. Because of the narrowness of the hill they do not face the street. 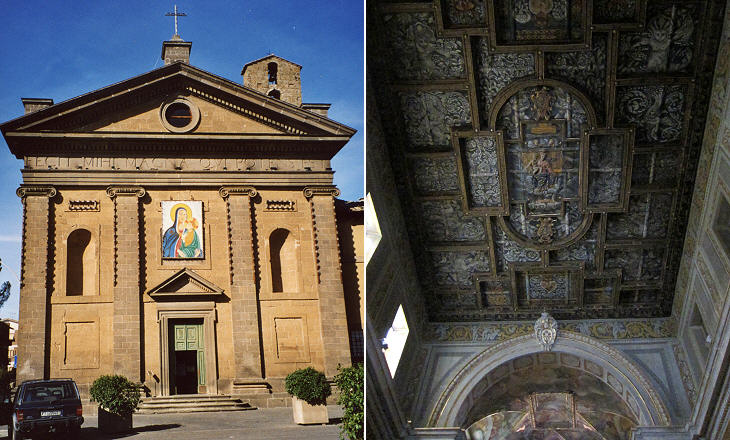 The most interesting church of Capranica is located outside the town where the hill is slightly larger. It was built in the second half of the XVIth century and it is attributed to Vignola, a leading architect of that period who designed Palazzo Farnese at Caprarola, some seven miles away. 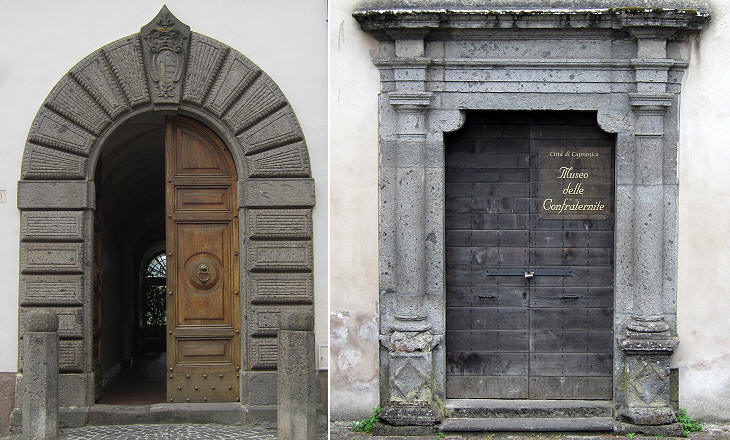 According to tradition Palazzo Accoramboni was built by Paolo Giordano Orsini, Duke of Bracciano, for his mistress Vittoria Accoramboni. Today it houses the Town Hall of Capranica.
S. Rocco is a small church which was built in 1495 at the foot of Capranica for the pilgrims. It was dedicated to St. Roch, because the saint himself was a pilgrim to Rome. 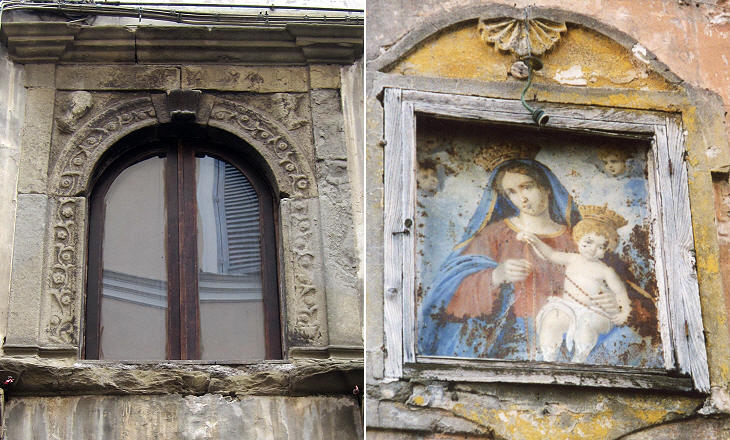