You may wish to see the first page covering this area or an introductory page to Ancient Ostia first. 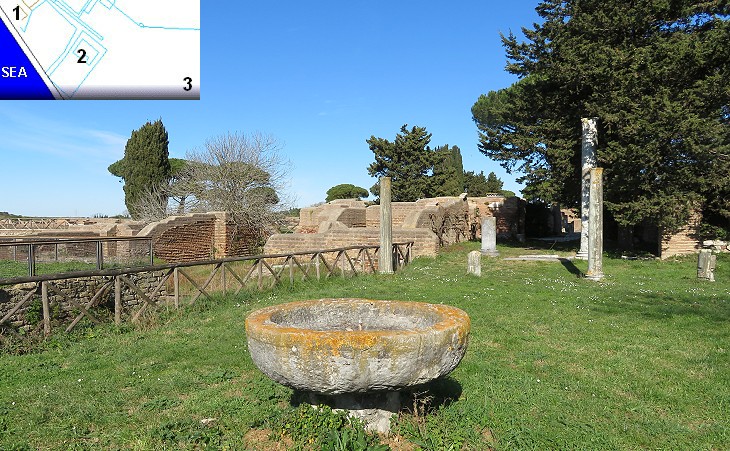 A large building on the very edge of the beach outside Porta Marina was excavated in 1959-1961. Based on archaeological evidence and on coins which were found on the site it was dated late IVth century AD, a dramatic period in the history of Rome. The building had never been finished. Its purpose and the reason why it was not finished are still debated. 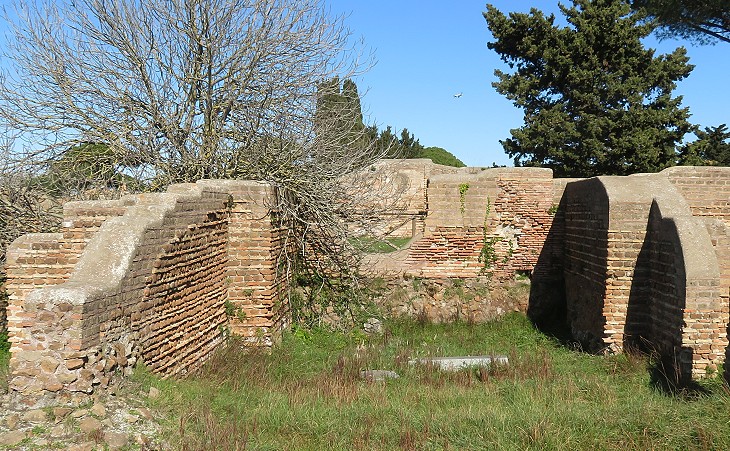 Hall which was decorated with "opus sectile"

Archaeologists found a hall which had almost entirely been decorated with marble inlays. That indicates that the owner or the owners of the building were very rich. It could have been the seat of an important guild or the seaside residence of an important official, e.g. the Praefectus Urbi, a sort of governor of Rome, or the Praefectus Annonae, who was in charge of the grain supply to Rome. The building perhaps collapsed because of an earthquake in 393. Archaeologists did not find evidence of attempts to restore it, notwithstanding the money poured into its construction. 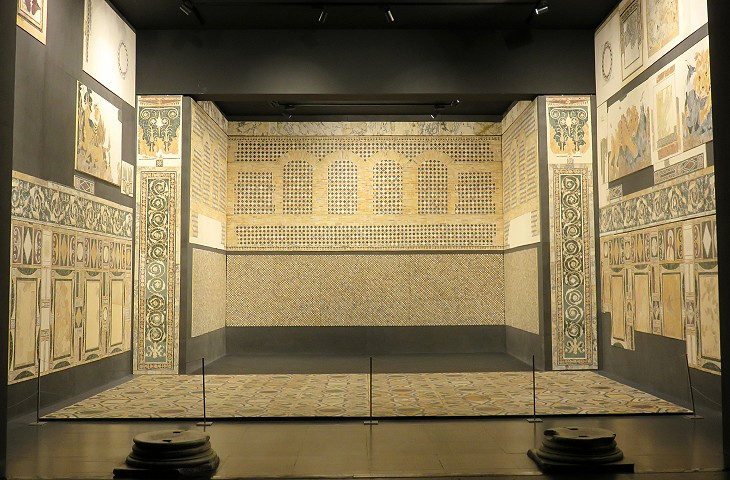 The short span of life of the building coincided with the attempts made by members of the Roman senatorial class to resist the imposition of the Christian religion which had been decreed by Emperor Theodosius. In 394 Theodosius defeated a "pagan" army at the Battle of the River Frigidus and eventually the last open temples of Rome were closed. The fact that the building was not completed has been interpreted as indication that its landlord was either a Christian who had been persecuted by the Roman Senate or a pagan who had been persecuted after Theodosius' victory. 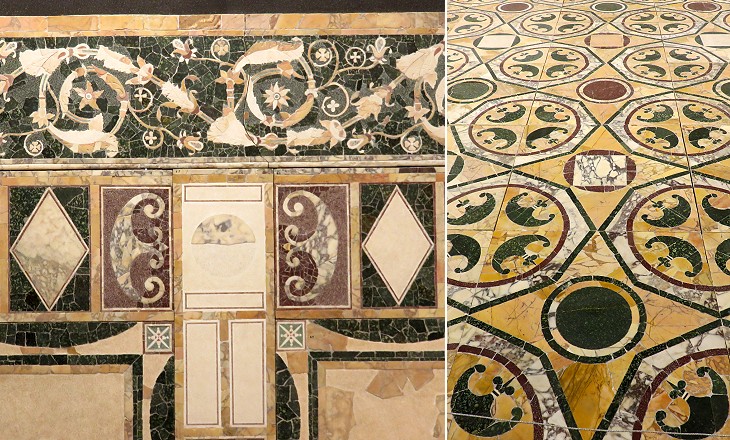 Museo dell'Alto Medioevo: reconstruction of the hall: decoration of the side walls (left) and of the floor (right) 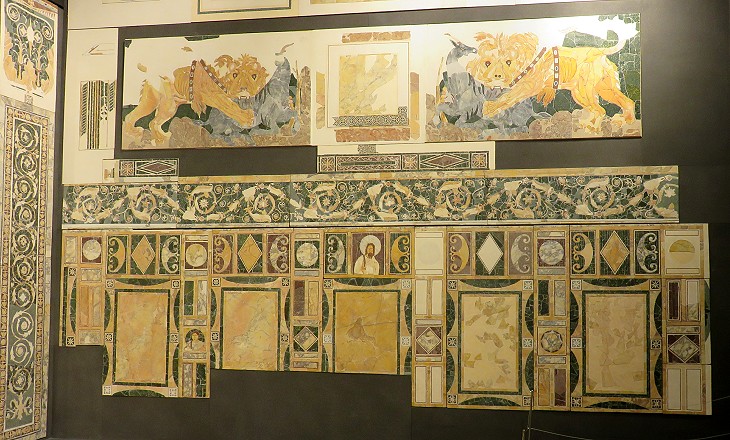 The upper parts of the side walls were decorated with four large panels depicting beasts in the act of attacking deer. This subject was not a novel one as it appeared in an opus sectile panel found at Basilica di Giunio Basso, in many prior mosaics and in the decoration of sarcophagi. Archaeologists were surprised to find two small panels on the right wall which did not fit into the overall decorative scheme. They depicted two men and it is likely that they had not been initially planned for, but were the result of an after-thought. 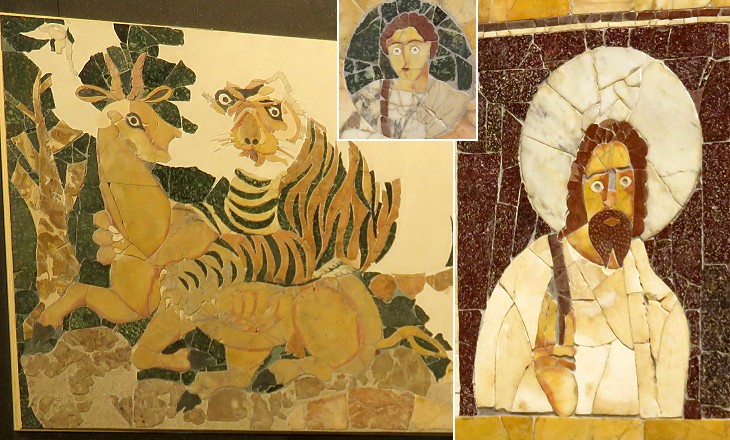 One of the two small panels portrays the bust of a bearded man raising his right hand and with a halo surrounding his head. The second panel portrays the bust of a young man. It is smaller and it is placed in a lower position and for these reasons it is believed that the young man is a pupil/follower of the bearded man. The initial interpretation of the first panel was that it portrayed Jesus Christ. As a consequence the building was identified as the house of a Christian or as a Christian oratory. This opinion was eventually challenged on the grounds that the early iconography of Jesus Christ was rather that of a young man without a beard (as portrayed in mosaics at Ravenna). According to this view the panel portrays Plotinus or another Neoplatonist philosopher, whose teachings in the late IVth century were regarded as an alternative to the Christian faith. 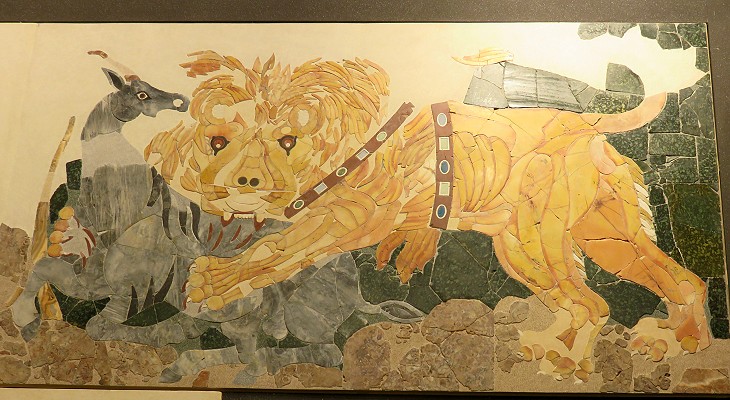 Museo dell'Alto Medioevo: reconstruction of the hall: a panel on the right wall

These two completely different views about the owner of the building do not impact on the artistic value of its opus sectile decoration and in particular of the panels portraying lions and tigers. Their unknown maker managed to depict the muscles of the animals by using pieces of the same marble having slightly different tones. The yellow marbles might have come from Simitthus in today's Tunisia. 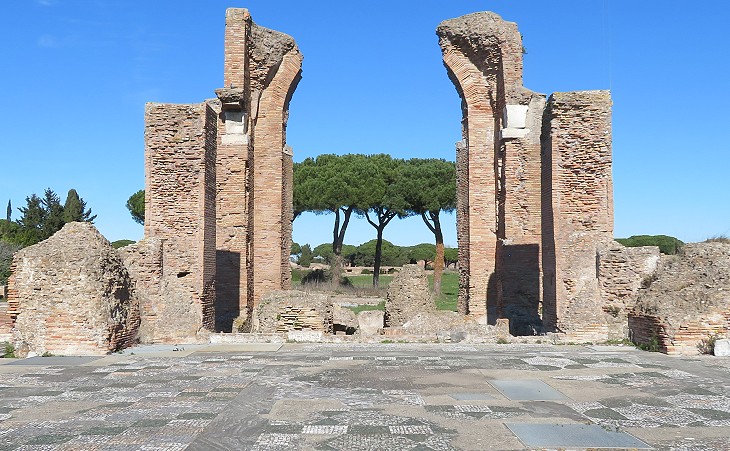 The piers of these baths can be seen from a great distance and together with the Capitolium they were the only monuments of Ostia which had not been entirely covered by the mud carried by the river and by the sand coming from the beach. Gavin Hamilton, the Scottish painter who carried out excavations in this area in the late XVIIIth century, believed the piers were part of Porta Marina, the existence of which was known because of inscriptions referring to it. 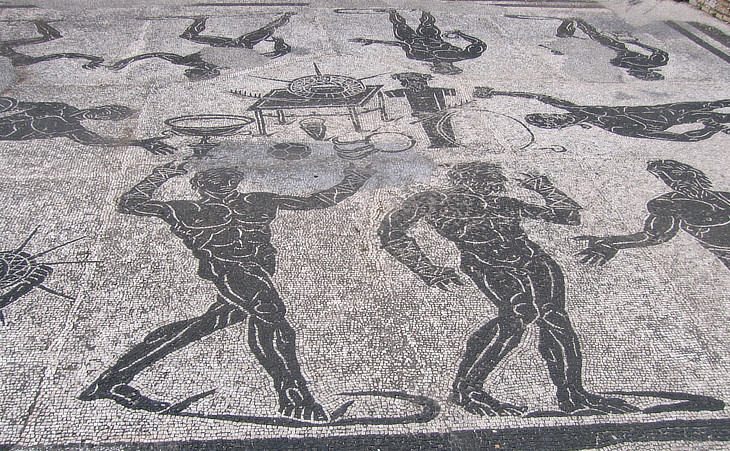 Terme di Porta Marina: floor mosaic near the "frigidarium" (the image used as background for this page shows another detail of it): it depicts athletes around a table with the prizes for the winners; in the foreground: two "pancratiasts" (wrestlers/boxers - see an impressive statue of an old "pancratiast")

The American psychologist Abraham Maslow (1908-1970) developed a theory establishing a hierarchy of human needs. It is usually represented as a pyramid divided into five layers: the lower layers represent the needs which must be satisfied to ensure mere survival. The upper layers represent more elaborate needs attaining to happiness and eventually self-actualization, the desire of human beings to be the best they can be. In this category one can place the interest of modern affluent societies for fitness and bodybuilding. 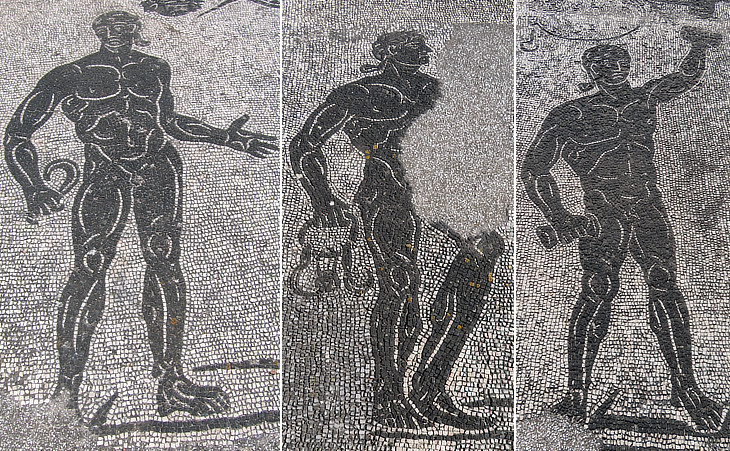 The mosaics which decorated Terme di Porta Marina prove that these needs were not unknown in ancient Ostia. They show how the Romans cared about their bodies. They kept fit through exercise and sports, they oiled and perfumed themselves and then enjoyed removing the unguents with a strigilis, a tool having the shape of the letter S, which inspired a decorative motif for sarcophagi. 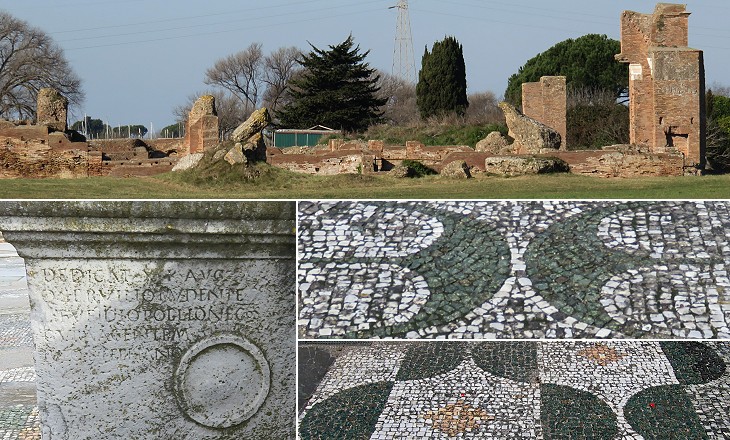 The baths were built in the early IInd century AD, most likely at the initiative of Emperor Trajan. Hamilton found a number of statues and reliefs which he sold to English friends. He stated that other diggers had preceded him.
Terme di Porta Marina were most likely the last bath establishment of Ostia to be discontinued, because archaeologists found evidence of maintenance activities carried out during the reign of Theodoric in the early VIth century. The reign of this Ostrogothic king was marked by some degree of economic recovery. He established an alliance with the Vandal rulers of Carthage which most likely led to an increase of trading activities at Ostia. 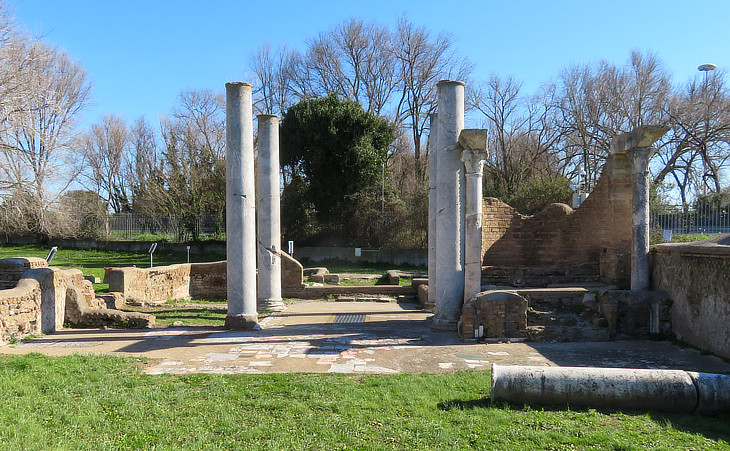 And as is the custom of all the Jews, they washed their hands in the sea and prayed to God.
The Letter of Aristeas - 301 - Translation by R.H. Charles. The text was written in Greek in the IInd century BC and most likely it was widely known by the Hellenized Jews of Ostia. It could explain the choice of building a synagogue very near the sea shore. In addition the chosen location was remote from the centre of the town and its many pagan temples and symbols. 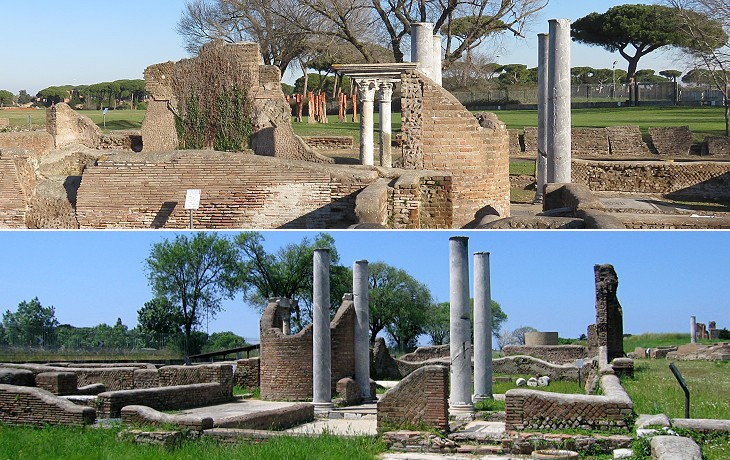 Synagogue: (above) south-western view taken from outside the archaeological area: in the foreground a courtyard which most likely housed some shops; (below) eastern view: the area to the left housed a bakery

The synagogue was discovered in 1961 at some distance from Terme di Porta Marina and on the very edge of the archaeological area. This suggests that other ancient buildings could lie beneath the modern large road which runs around the synagogue.
In addition to the prayer room the complex included a bakery for the preparation of unleavened bread, a hall for meetings and a courtyard with shops. 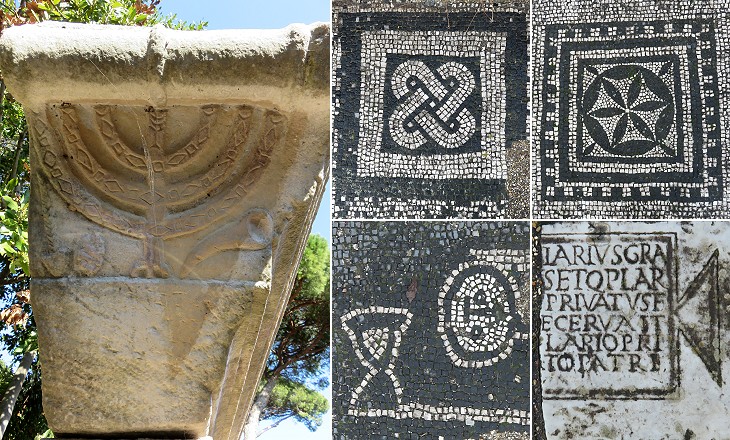 Synagogue: (left) capital of a column of the Holy Books shrine; (right) details of the floor mosaics and a reused funerary inscription

The decoration of the complex is consistent with that prevailing at Ostia: black and white mosaics some of which show Solomon's knots and traditional capitals to which lintels with a menorah, the main Jewish religious symbol (it can be seen also in ancient tombs) were added. The synagogue was built in the Ist century AD and it was oriented towards Jerusalem (you may wish to see some synagogues of the same period in Israel). 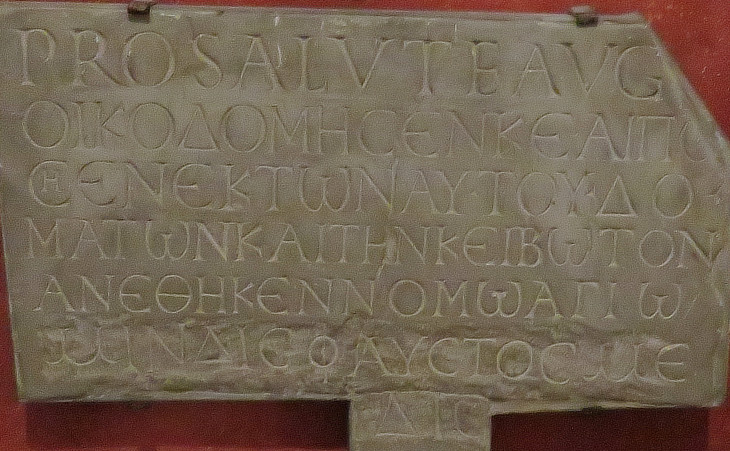 This inscription was found in 1961 in the floor of the synagogue where it had been reused face down. It is very interesting because it contains a dedication to the emperor or emperors, perhaps Septimius Severus and Caracalla, which is an indication of the loyalty to the emperor of the Jews of Ostia. The Greek text celebrates the rebuilding of part of the synagogue (or an addition to it) and it shows the preference for Greek over Latin amongst the Jews, which corresponds to similar evidence from the catacombs in Rome.