Initially archaeologists were puzzled by the number of monuments celebrating Marcus Nonius Balbus they found. The inscriptions mentioned he had promoted the restoration/construction of the walls and of some public buildings of Herculaneum, yet these deeds did not seem so important to deserve so many recognitions. Further research led to the identification of Marcus Nonius Balbus with the young tribune of the plebs who supported Octavian in 32 BC when Consul Gaius Sosius espoused the cause of Antony and violently attacked Octavian in the Senate. Later on M. Nonius Balbus (or his son by the same name) was appointed proconsul of Crete, where he earned the trust of the inhabitants of the island who expressed their gratitude by commissioning some of the inscriptions found at Herculaneum. 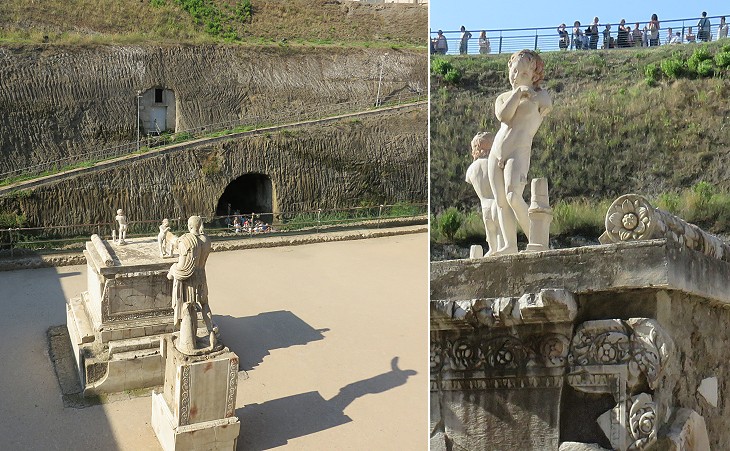 Terrace of Marcus Nonius Balbus: (left) view from the town showing the wall of volcanic material on the former site of the seashore; (right) detail of the funerary monument

The funerary monument of M. Nonius Balbus stood outside the city walls and is very similar to those found at Pompeii. The inscription states that he was entitled to the setting up of a bisellium, a portable folding chair, at performances in the theatre. 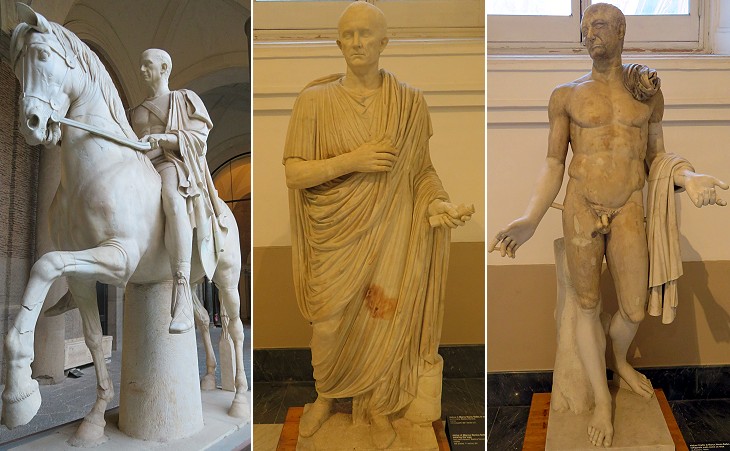 Of these the theatre is the most considerable. On a balustrade which divided the orchestra from the stage was found a row of statues, and on each side of the pulpitum, the equestrian figure of a person of the Nonia family; they are now placed under the porticos of the palace of Portici, and from the great rarity of equestrian statues in marble would be very valuable objects, were their workmanship even less excellent than it is; one of them in particular is a very fine piece of sculpture.
Henry Swinburne - Travels in the Two Sicilies. 1777-1780
After descending sixty steps into a pit, by torch-light you gaze in admiration at the theatre which once stood beneath the open sky, and listen to the guide recounting all that was found there, and carried off.
Johann Wolfgang von Goethe - Italian Journey - March 1787 - translation by Charles Nisbet 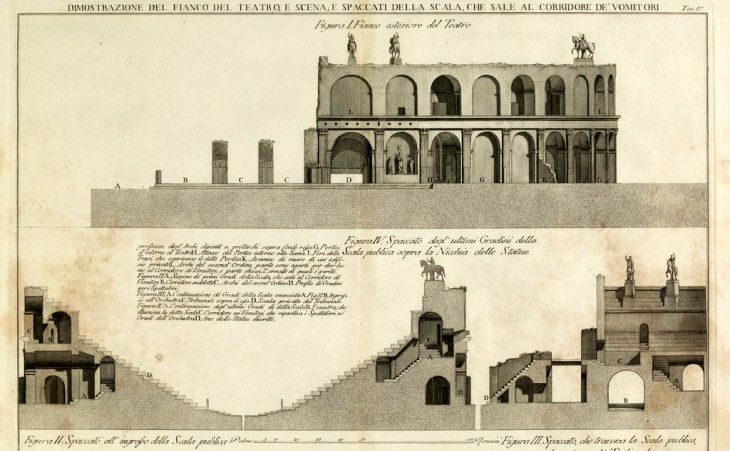 Some workmen were digging the gloomy well on the brink of which we now stand, looking down, when they came on some of the stone benches of the theatre (..) (we found) great walls of monstrous thickness, rising up between the benches, shutting out the stage, obtruding their shapeless forms in absurd places, confusing the whole plan, and making it a disordered dream. We cannot, at first, believe, or picture to ourselves, that THIS came rolling in, and drowned the city; and that all that is not here, has been cut away, by the axe, like solid stone. But this perceived and understood, the horror and oppression of its presence are indescribable. (..) So, in the theatre of Herculaneum, a comic mask, floating on the stream when it was hot and liquid, stamped its mimic features in it as it hardened into stone; and now, it turns upon the stranger the fantastic look it turned upon the audiences in that same theatre two thousand years ago.
Charles Dickens - Pictures from Italy - 1846 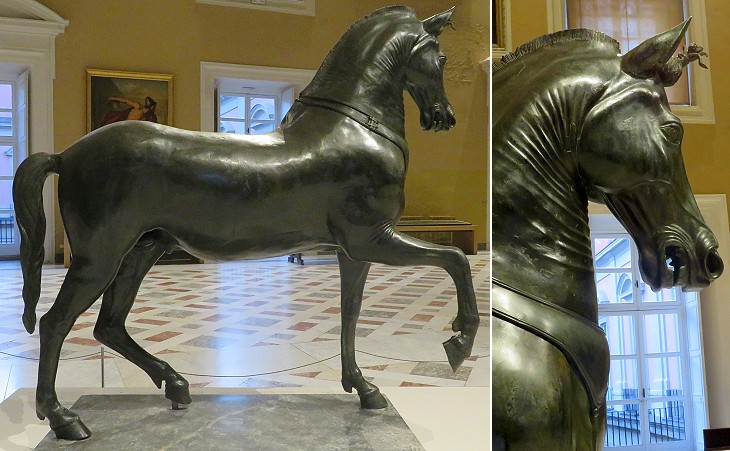 Archaeological Museum of Naples: the "Mazzocchi Horse" from the Theatre of Herculaneum

This vast building was surmounted by a quadriga, or four-horse chariot with its charioteer, as big as life; the whole of gilt bronze. (..) These pieces of statuary were overturned by the lava. (..) The remains were thrown into a cart and brought to Naples (..) where they remained for a long time (..) and it was not till several pieces that had been stolen were missed, that a resolution was taken to make an honourable use of what remained. (..) As several of the pieces requisite to compose an entire horse were wanting, there was a necessity for casting others to supply the place of them. By so doing however a tolerably fine horse was at last formed. (..) This horse stands (..) on a pedestal bearing (..) an inscription (..) by Mazzocchi (Alessio Simmaco Mazzocchi, Dean of the Cathedral of Naples and an expert in ancient epigraphy).
Johann Joachim Winckelmann - Critical account of the situation and destruction by the first eruptions of Mount Vesuvius, of Herculaneum, Pompeii and Stabia - translated into English in 1771 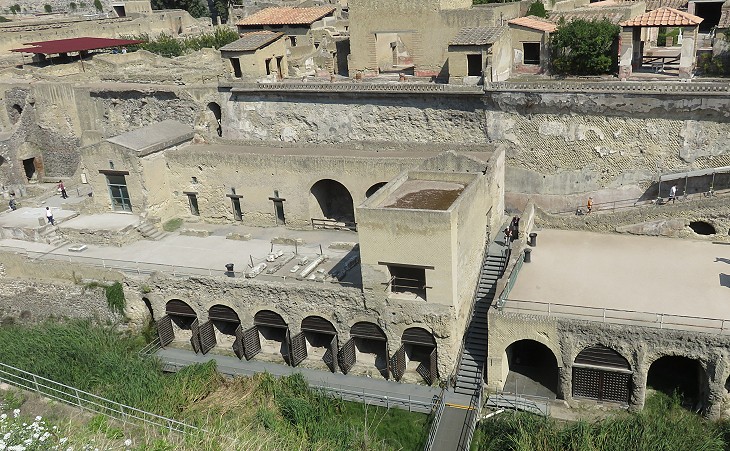 A terrace by the sea was an excellent location for temples where merchants and seamen could gather. Its western sector was occupied by a sacred area containing two temples, one dedicated to Venus and the other to four gods. It was excavated after 1980. 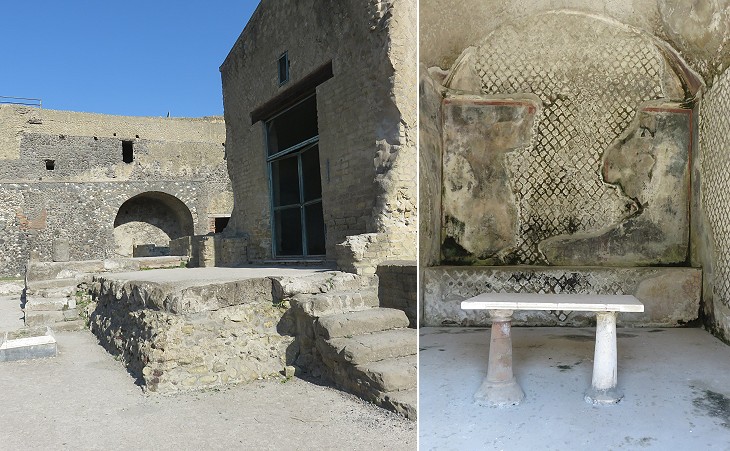 Temple to Venus: (left) site of a small portico; (right) interior with traces of a fresco depicting a landscape

It was Venus who was first known as Stella Maris, Star of the Sea. While Neptune was the god of sea storms, Roman seafarers invoked Venus (and later on Isis) to safely reach the harbour. The design of the cella indicates it was most likely used for meetings by a college of priests in charge of organizing ceremonies which took place outside the building or in the sea facing it. 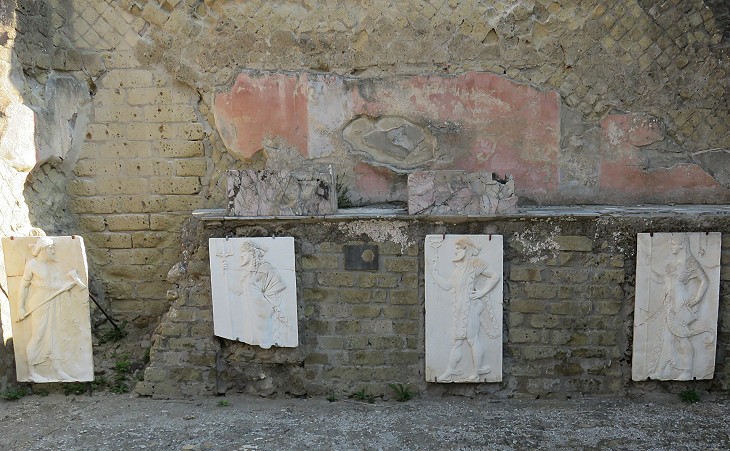 Temple to the Four Gods

Similar to Pompeii, Herculaneum was struck by an earthquake in 62 AD and archaeologists have been able to identify evidence of buildings which were restored, modified or added after that event. The Temple to the Four Gods existed prior to the earthquake because the reliefs of the gods are dated late Ist century BC. 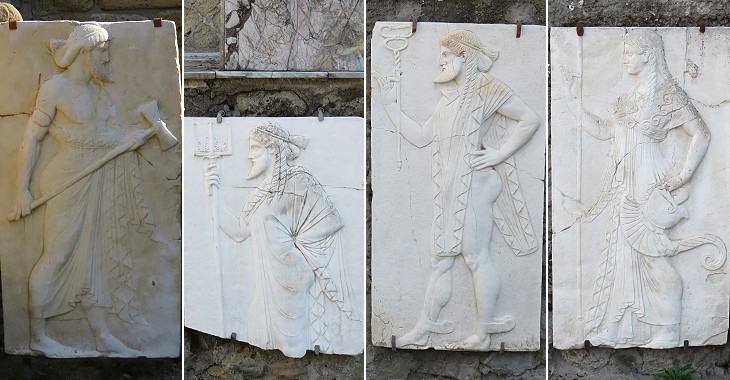 It is likely that the temple was built by a consortium of guilds: Vulcan was the patron of trades related to kilns, Neptune of seamen, Mercury of tradesmen in general and Minerva of craftsmen. The way the gods are depicted is similar to that usually employed in Greek vases (you may wish to see Hermes/Mercury in the Euphronios Krater or Dionysus in a krater of Paestum) and it recalls Persian patterns. 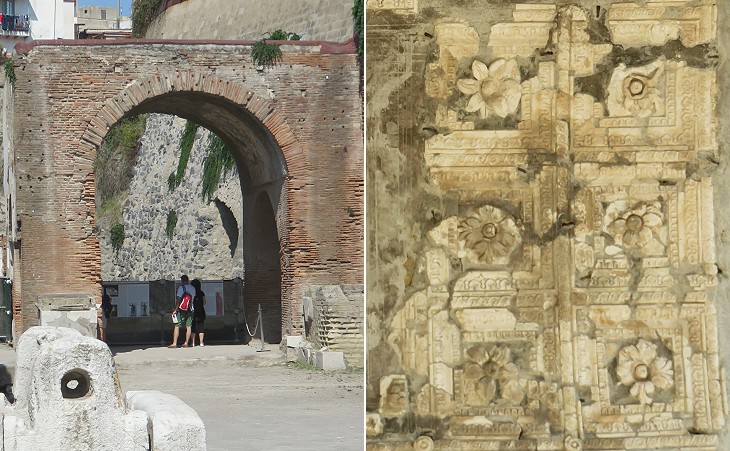 (left) Portico of Augusteum on Decumanus Maximus; (right) stucco decoration of its ceiling

Now I leave any one to judge how excessively expensive it would be to blow up such a thick and extensive crust of lava and remove the vast quantity of ashes accumulated under it. And after all what would the advantage of it be? That of lying bare a parcel of old ruinous walls merely to satisfy the ill judged curiosity of some virtuosi at the expense of a well built and very populous city. J. J. Winckelmann
The underground passages which were dug in the XVIIIth century identified a large building in which many statues of the imperial family were found. For this reason it was called Augusteum, although an inscription found at a later time indicated that it was a basilica and that its construction had been promoted by M. Nonius Balbus. The building is still inside the volcanic material and only its portico is visible. 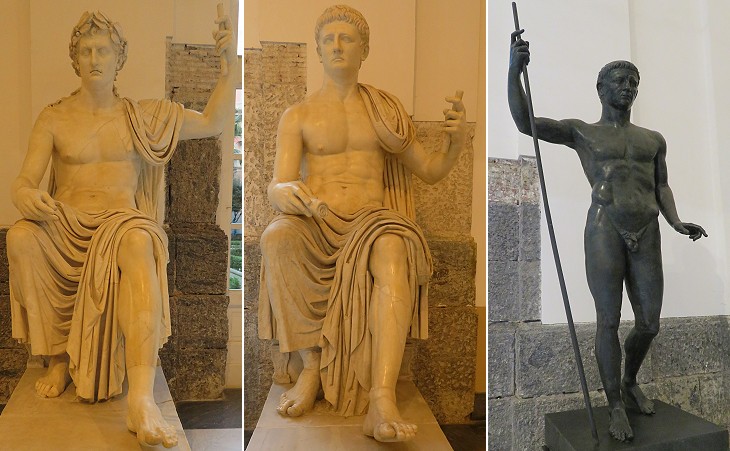 Archaeological Museum of Naples: statues of Emperors Augustus (left) and Claudius (centre/right) that were found at the Augusteum; a bronze statue of Augustus is shown in the image used as background for this page

King Charles of Bourbon entrusted Joseph Canart, a sculptor from Rome where he had worked with Camillo Rusconi, with the restoration of the marble statues which were found at Herculaneum. We have records of his activity between 1738 and 1760 telling that he had up to twenty assistants in addition to seven young Muslim slaves who were employed in sawing and polishing marble. Today Canart's achievements are regarded as an excess of restoration which deprived the statues of the patina we expect to see in an ancient work of art. 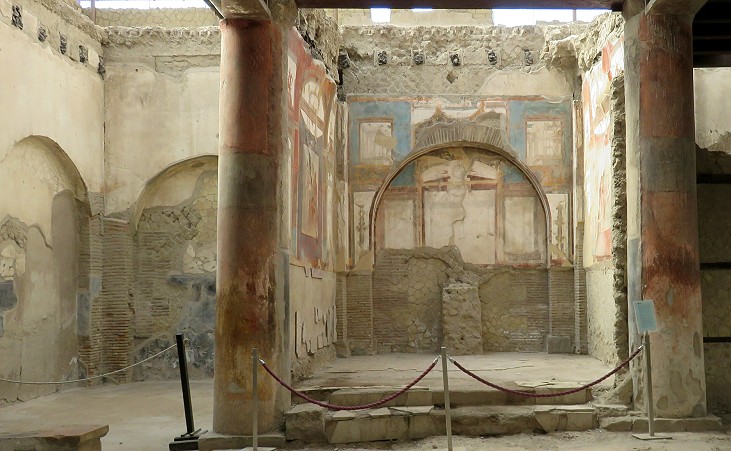 The condition of slave (Lat. servus) was not necessarily a lifetime one in Roman society. Those who worked closely with the patricians who owned them, as managers of their properties or tutors of their children were usually freed after many years of service. They acquired the status of libertus, which however did not allow them to access the most prestigious political and religious positions. It may seem strange that a former slave could have the ambition to have a role in the administration of a town, but in some instances the manumission, the act granting freedom, was accompanied by the bequest of properties or money or the libertus was a very learned man. Liberti could acquire a public role by becoming augustales, members of a college in charge of organizing ceremonies in honour of the imperial family. The location, size and decoration of the building where the augustales of Herculaneum met shows that they did not lack financial resources. An inscription indicates that it was inaugurated when Emperor Augustus was still alive and that for the occasion a banquet was offered to the Senate of the town. See other similar buildings at Ostia and Lucus Feroniae. 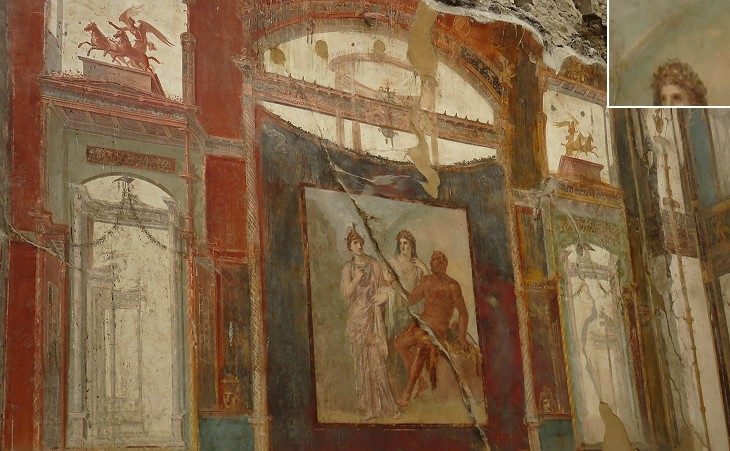 Collegio degli Augustali: Hercules entering Olympus, the abode of the gods, where he is greeted by Minerva and Juno (and by Jupiter in the form of a rainbow - see inset)

A hall at the centre of the building was decorated with frescoes portraying Hercules, the mythical founder of the town. This is how Ovid narrated the death and divine transformation of Hercules: But you, famous son of Jove, felled the trees that grew on steep Oeta, and made a funeral pyre (..). As the mass caught light from the eager fire, you spread the Nemean Lion's pelt on the summit of the pile of logs, and lay down, your neck resting on your club, and with an aspect no different from that of a guest, reclining amongst the full wine cups, crowned with garlands. Now the fierce flames, spreading on every side, were crackling loudly, and licking at his body, he unconcerned and scornful of them. The gods were fearful for earth's champion. Saturnian Jupiter spoke to them, gladly, since he understood their feelings. 'O divine beings, your fear for him delights me, and I willingly congratulate myself, with all my heart, that I am called father and ruler of a thoughtful race, and that my offspring is protected by your favour also. Though this tribute is paid to his great deeds, I am obliged to you, also. But do not allow your loyal hearts to feel groundless fears. Forget Oeta's flames! He, who has defeated all things, will defeat the fires you see, nor will he feel Vulcan's power, except in the mortal part that he owes to his mother, Alcmene. What he has from me is immortal, deathless and eternal: and that, no flame can destroy. When it is done with the earth, I will accept it into the celestial regions, and I trust my action will please all the gods. (..) So, when the Tirynthian hero had shed his mortal body, he became his better part, beginning to appear greater, and more to be revered, in his high majesty. The all-powerful father of the gods carrying him upwards, in his four-horse chariot, through the substanceless clouds, set him among the shining stars.
Metamorphoses - Book IX - translation by A. S. Kline 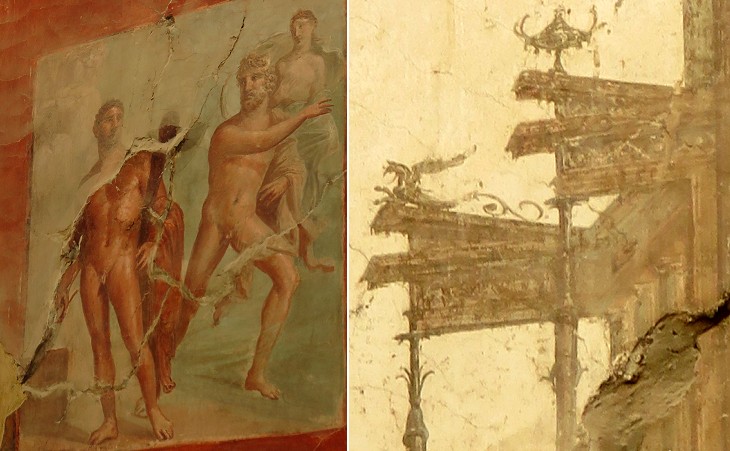 Collegio degli Augustali: (left) Hercules with Achelous and Deianira; Achelous was a river god whom Hercules defeated to conquer Deianira. In the fight Achelous turned himself into a bull, but Hercules tore apart one of the horns (the fight is better seen in a mosaic from the Villa of Nero at Anzio); (right) detail of the decoration depicting a fake architecture