- Tombs
(detail of a fresco at House of the Orchard) 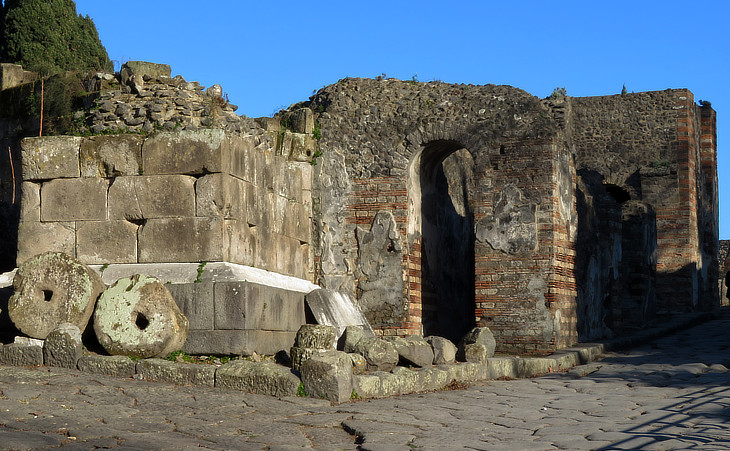 Northern part of Porta Ercolano and an unfinished tomb outside it

I was next conducted through a large track of vine-yard to a cavity of considerable extent, which has laid open part of a principal street, one of the city gates, a length of wall, some tombs, and a road without the gates.
Henry Swinburne - Travels in the Two Sicilies. 1777-1780
Pompeii complied with the Roman law which did not allow tombs within the walls of the town. The necropolis found outside Porta Ercolano is the largest one and it retains some fine tombs. They were made popular across Europe as early as 1789 by etchings by Francesco Piranesi, son of Giovanni Battista (you may wish to see one of them - it opens in another window). 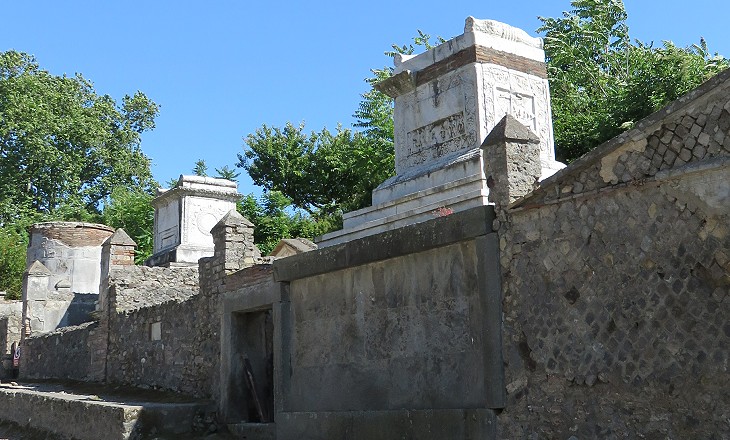 The traveller will leave the railway branch at the Pompeii station, which is near the quarter of the Forum, and is about equidistant from the two main entrances to the city. The best plan, if this route be followed, is to walk or ride from the station to the old road, which will enable him to enter the city by the Street of the Tombs and quit it by the modern entrance at the barracks. (..) On either side the street is bordered by tombs of every variety of form and taste, recalling to our imagination the ancient glories of the Appian as it once emerged from the Eternal City upon the Campagna.
John Murray - Handbook for Travellers in Southern Italy - 1853 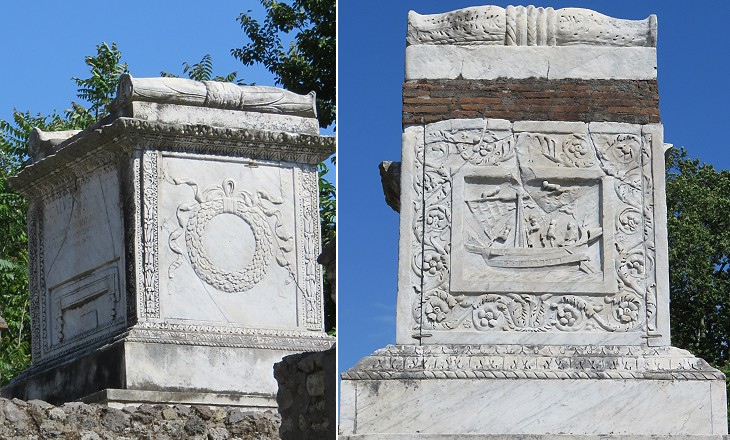 Details of the tombs of C. Calventius Quietus (left) and C. Munatius Faustus (right), two citizens having right to a "bisellium", a folding seat at the theatre (see similar tombs at Herculaneum and Verona)

The funerary monuments of Pompeii, similar to those of Rome (e.g. Tomb of Marcus Virgilius Eurysaces), provide interesting data about the economic and political life of the town. The inscription in the first monument reads: "To Caius Calventius Quietus, Augustalis. On account of his munificence he is honoured with a bisellium by decree of the decurions and with the consensus of the people." The second one shows a ship at sail which most likely was owned by the dead.
The relief on the other side is a very curious representation of a ship entering port. (..) This interesting sculpture, which would make a beautiful subject for a seal, is supposed to have a double meaning, first as a memorial of the commercial pursuits of Munatius; and secondly as illustrative of the last scene of the voyage of life, when the soul enters into a safe and peaceful haven. (a similar message can be seen in a funerary mosaic at the Great Necropolis of Porto). (..) Crossing again to the right side of the street, we find an inclosure leading to a vast court with a portico (..) it is now (..) regarded as one of the courts of the adjoining villa, which has been dignified by the name of Cicero. He tells us, indeed in many of his letters, that he had a villa in the neighbourhood of Pompeii; but there is no proof that it was this one. (..) Some of the finest paintings and mosaics in the Museo Borbonico were found among its ruins, including the (..) mosaics which bear the name of Dioscorides of Samos. Murray 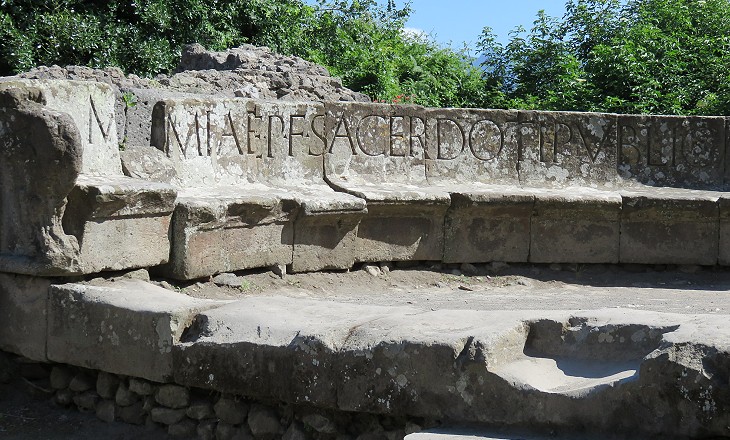 The tomb of a priestess, a semicircular bench, with a stone back, on which was the inscription cut in large characters. Over the back you have a sight of the sea and the setting sun - a glorious spot, worthy of the beautiful idea.
J. W. Goethe - Italian Journey - March 13, 1787 - translation by Charles Nisbet
It may be observed that the great approaches to the cities were not marked by tombs alone, but partly by suburban villas, and tradesmen's houses, and semicircular seats. Thus they were frequented as public walks, and the beauty of the sepulchres, together with the religion of the people, and the wisdom of the higher orders, prevented any melancholy reflections from being suggested by the receptacles of the dead. Those who have seen the street of the tombs at Pompej will feel the truth of this observation.
John Cam Hobhouse - Dissertations on the Ruins of Rome - 1818
Priestesses could achieve a very high status in Ist century AD Pompeii. The tomb of Mamia, one of them, has always attracted the attention of visitors for the semicircular bench where funerary banquets took place. Wilhelm Tischbein, a painter who accompanied Goethe to Pompeii, portrayed Duchess Anna Amalia of Brunswick-Wolfenbüttel sitting on the bench (it opens in another window). 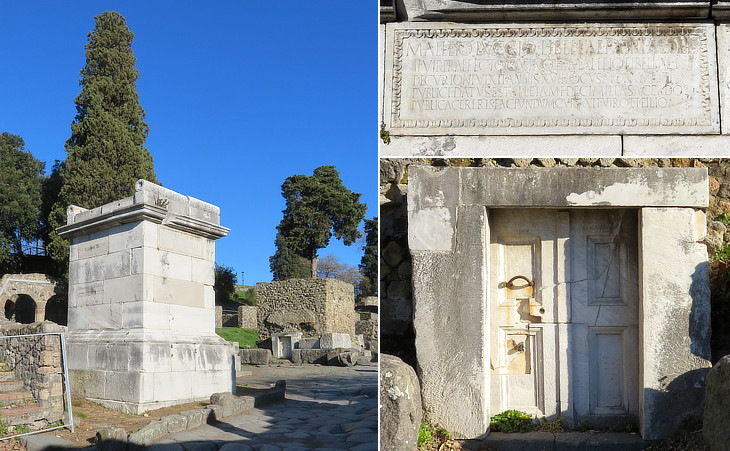 (left) Tomb of the Libella; (right-above) its inscription; (right-below) decorative marble door of the next tomb which was excavated in 1813

Tomb of the Libella, a solid and very elegant tomb, built of blocks of travertine resembling the pedestal of a column, 16 feet high with a moulding and cornice, and a long inscription, recording its erection on a site given by the public, by Alleia Decimilla, public priestess of Ceres, to her husband and son, Marcus Alleius Lucius Libella the father, aedile, duumvir, and quinquennial praefect, and M. Alleius Libella the son, decurion, who lived 17 years. Near this are a small square enclosure, and another tomb, both of them either half finished or ruined. Murray
The long inscription shows that the Allei were a very important family; father and son held positions in the administration of the town and the mother was a priestess. 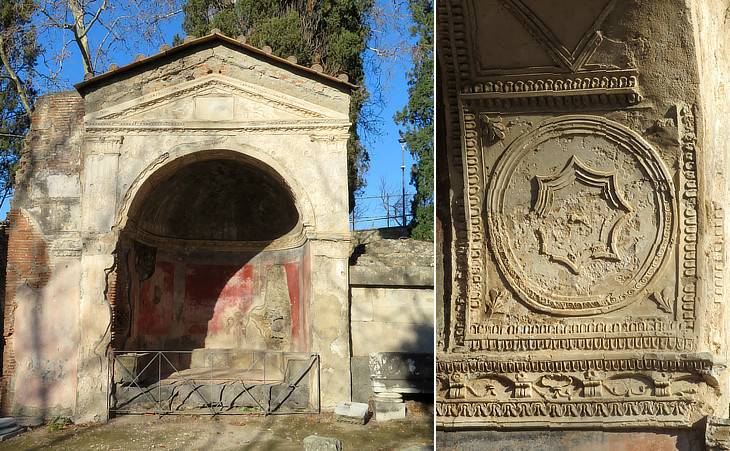 (left) Unnamed "schola tomb" (and to its right Tomb of the Blue Vase/Glass Amphora); (right) detail of its stucco decoration

The Hemicycle tomb is a deep semicircular seat or esedra, with a vaulted roof ornamented in front by pilasters in two rows, the upper ones springing out of the capitals of the lower. The walls and vault were gaily painted in arabesques and panels. Near it were found the skeletons of a mother and three children, one of them an infant, all closely folded in each other's arms, and covered with gold ornaments elaborately worked, and enriched with pendant pearls of great value. Tomb of the Glass Amphora, near the Hemicycle, remarkable for an amphora of blue glass with white figures which was found in it. Murray
Schola tombs are unique to Pompeii. The Hemicycle tomb is a rare entire example of this building, because in general archaeologists found only the semicircular bench. The term schola (after which school) in origin indicated a place where to rest, in this case to attend funerary ceremonies. Details of tombs with a decoration based on acanthus leaves and acorns: (above) Tomb of the Garlands; (below) Tomb of the Blue Vase

Tomb of the Garland, on a lofty basement, with Corinthian pilasters sustaining festoons of flowers. Murray
In 1812 François Mazois, an architect at the court of Joaquim Murat, King of Naples and brother-in-law of Napoleon, began to draw the monuments of Pompeii. His works were eventually published in 1824-1838 in Les ruines de Pompéi. He carefully copied the decorations of the tombs outside Porta Ercolano. Those carved in stone, by and large, are still there, but many stucco reliefs are lost. Archaeological Museum of Naples: the "Blue Vase"; it was found in 1837 in the presence of King Ferdinand I

This beautiful vase was found in a small unassuming tomb. It testifies to the wealth and taste of the inhabitants of Pompeii who were prepared to part with such an exquisite object to honour their dead. It depicts a group of putti gaily harvesting grapes for winemaking and playing musical instruments, an early example of a subject which will remain popular for centuries, also among the early Christians. You may wish to see the very similar Portland Vase which was found in Rome in the XVIth century. 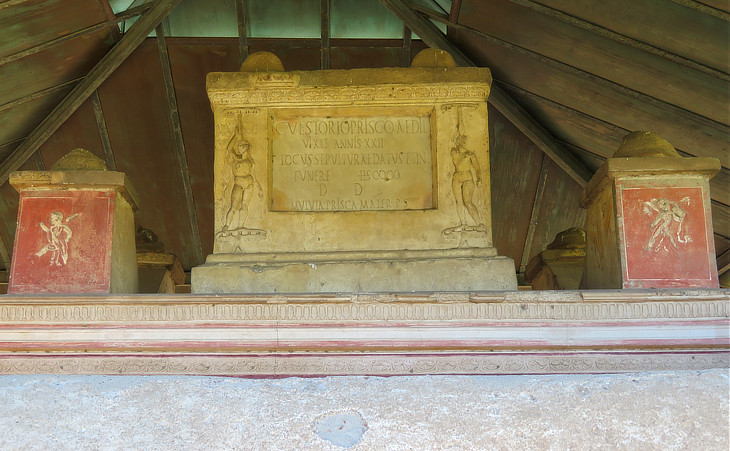 Necropolises were eventually discovered also outside the other gates of Pompeii; that at Porta Vesuvio was excavated in 1907-1910 only in the vicinity of the gate; tombs might still lay under the vineyards outside the archaeological area. The most interesting tomb has small decorated altars above a large and tall basement. It is dedicated to an aedile, an officer in charge of public buildings, who died at the age of 22. The tomb has other paintings inside the basement which contains the funerary room. 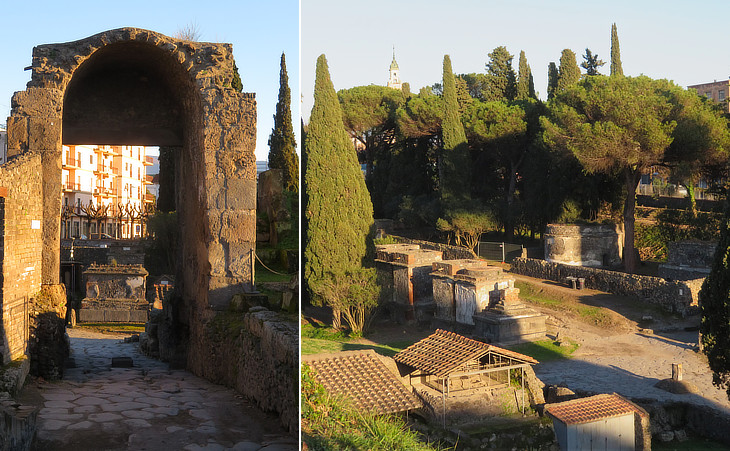 This necropolis was excavated in the 1950s and efforts were made to enhance its evocativeness, which gains from the site not being much frequented, unlike the necropolis outside Porta Ercolano. Some seventy tombs are aligned along a road which was parallel to the walls. As usual in Italian archaeological areas pines and cypresses were planted along the road, a practice which was introduced by Giacomo Boni when he excavated the Palatine hill. 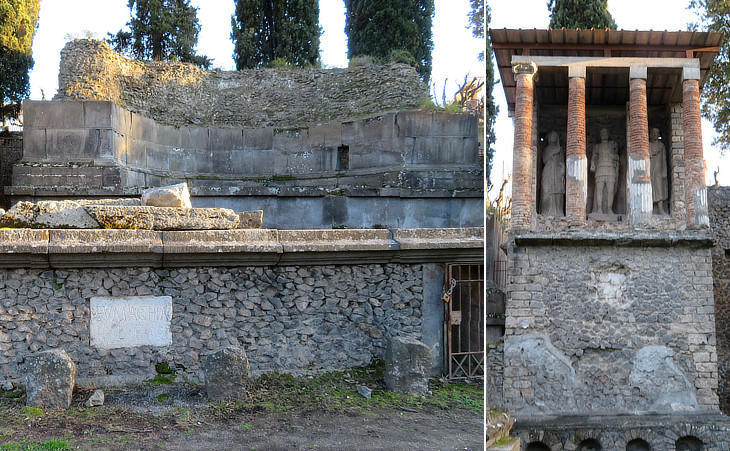 Archaeologists were excited when they discovered that a schola tomb was built by priestess Eumachia to whom a large building was dedicated in the Forum. They found two inscriptions "EUMACHIA L(uci) F(ilia)" and "SIBI ET SUIS" which indicated that the tomb was meant also for members of her enlarged family, by this meaning a number of freedmen and freedwomen, for a total of at least 13.
Marcus Octavius has been identified as a veteran who settled in the town after it had been conquered by Silla in 89 BC, thus his tomb is among the oldest ones. The statues of a woman, a soldier and an old man stand in a temple-like portico, while four niches in the lower part of the monument housed small busts. 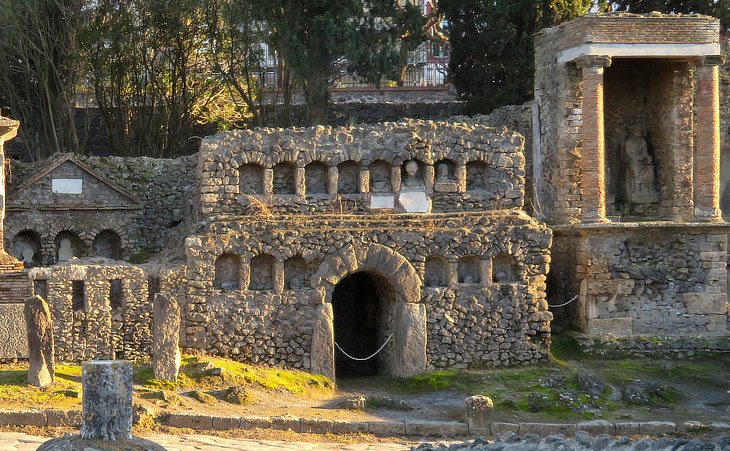 Other tombs at the Necropolis of Porta Nocera with statues, niches and busts, one of which is shown in the image used as background for this page

Move to:
The Town
Temples and Religion
Public Buildings near the Forum
Other Public Buildings
Houses
Paintings
Other Works of Art
The Economy
Villa di Poppea at Oplontis