Links to this page can be found in Book 4, Day 4, View C7, Rione Pigna and Rione Sant'Eustachio. 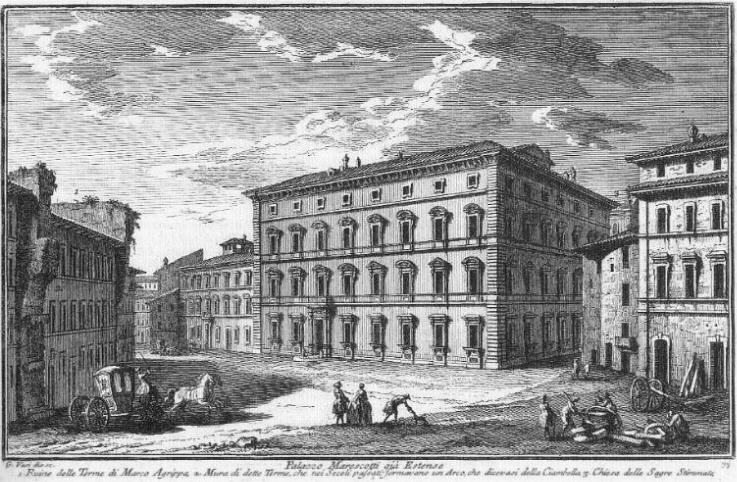 The title of this 1754 plate by Giuseppe Vasi made reference to the fact that the palace had belonged for some fifty years to the Este, the Dukes of Modena (and previously of Ferrara). The Marescotti bought the building in 1746 so it is understandable that many were still familiar with its old name. The side of the palace depicted by Vasi is the northern one where the entrance is situated. Vasi chose to show it from a narrow street to its west in order to include Arco della Ciambella, in that very unique mixture of ancient and modern monuments which appealed to the buyers of his etchings.
The view is taken from the green dot in the small 1748 map here below. In the description below the plate Vasi made reference to: 1) Ruins of Terme di Agrippa; 2) Arco della Ciambella; 3) Chiesa delle Stimmate di S. Francesco. 3) is shown in another page. The small map shows also 4) Palazzo Marescotti; 5) S. Giovanni della Pigna; 6) Case dei Porcari; 7) SS. Benedetto e Scolastica; 8) Palazzo Datti; 9) Palazzo Sinibaldi. The dotted line in the small map delineates the border between Rione Sant'Eustachio (left) and Rione Pigna (right). 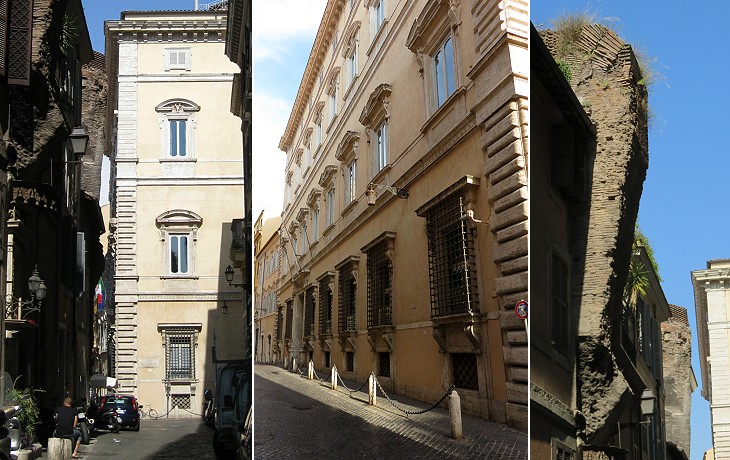 To say that Vasi took some liberties in his plate is an understatement. Palazzo Marescotti was and still is imprisoned in a web of narrow streets. From the viewpoint chosen by Vasi near Arco della Ciambella, the northern façade can only be guessed by an Italian flag on its entrance. In order to see it, one has to reach Via dei Cestari, the street which links Chiesa delle Stimmate di S. Francesco with S. Maria sopra Minerva. 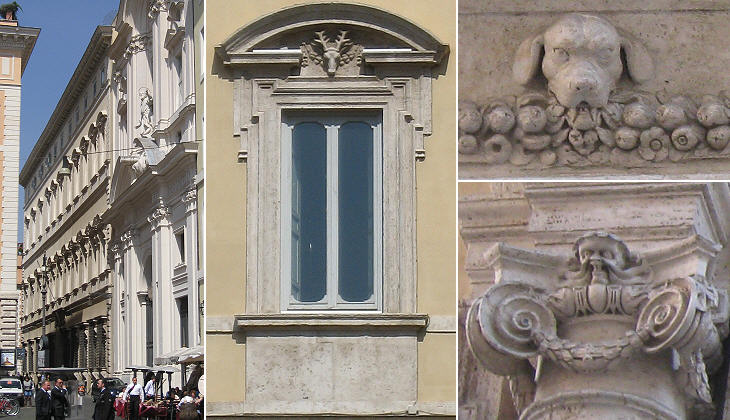 (left) Façade in Via dei Cestari which was enlarged after 1754 and Chiesa delle Stimmate di S. Francesco; (centre/right) details of the palace including a small laughing mask

The design of the palace is attributed to Giacomo della Porta; it was commissioned by Cardinal Marcantonio Maffei, but at his death in 1583 the uncompleted building was sold to the Peretti, the family of Pope Sixtus V. It was the first of many changes of property. The windows are decorated with stag heads, a heraldic symbol of the Maffei; other details cannot be ascribed with certainty to any of the many owners of the palace. The Marescotti had a family chapel at S. Girolamo della Carità. 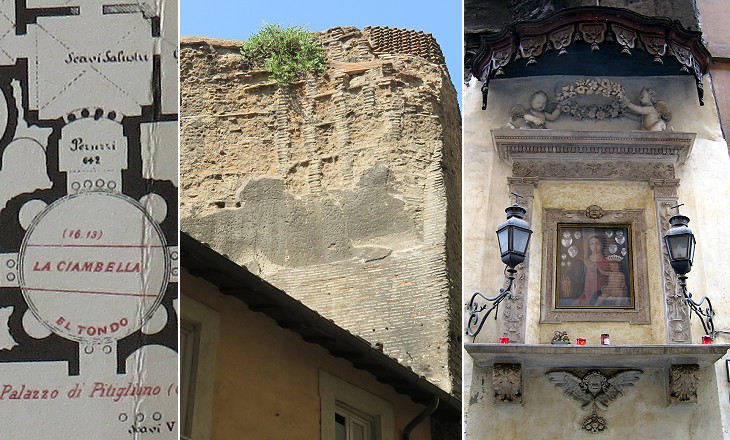 (left) Map from "Forma Urbis Romae" by Rodolfo Lanciani - 1893: in black the reconstruction of the main hall of the baths and in red the current street; (centre) masonry of the walls which supported the dome; (right) the "madonnella" shown in the plate

Marcus Vipsanius Agrippa was son-in-law of Emperor Augustus and one of his most trusted advisors. He superintended the construction of a series of buildings in Campus Martius (Field of Mars), the swampy land almost surrounded by the Tiber, which was used for military training purposes. He built the Pantheon, a Basilica dedicated to Neptune and the first large public baths of Rome. An aqueduct (Aqua Virgo) carried water to the baths and to the whole area which was embellished with a pond (Stagnum Agrippae) linked to the Tiber by a canal: it was named Euripus, after Egripos, the narrow channel which separates the Greek island of Euboea from the mainland.
The surviving walls of the baths belong to a restoration by Emperor Alexander Severus; they supported the collapsed dome of the main hall; they formed a circle around an empty space, so they were called la Ciambella, the doughnut. The current street was opened in 1621 and part of the remaining walls were demolished. Initially the street passed under an arch of these walls which was eventually pulled down. 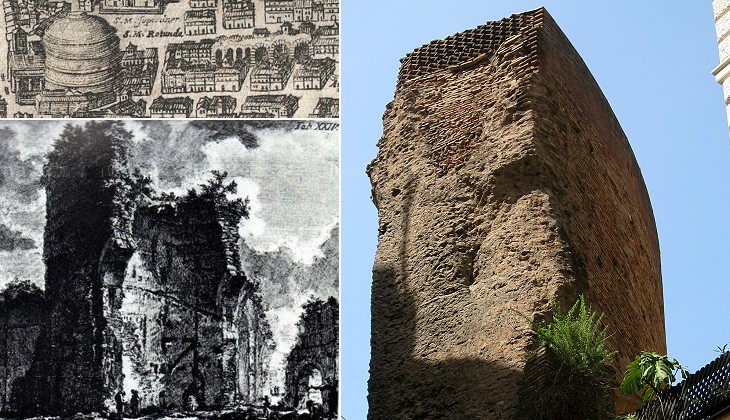 (left-above) Detail from the 1593 Map of Rome by Antonio Tempesta showing the Pantheon (left) and Terme di Agrippa (right) as they were before their partial demolition; (left-below) imaginary view of the ruins by Giovanni Battista Piranesi; (right) another view of the remaining walls 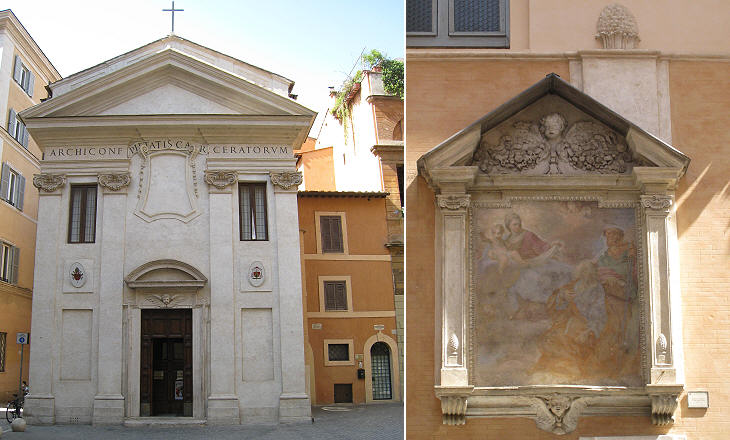 The name of the church makes reference to Pigna, the large bronze fir cone (now at Cortile del Belvedere) which once stood on this site and after which the neighbourhood was named. A church founded in the Xth century was replaced in 1624 by a new building designed by Angelo Torrone. Its decoration has several references to fir cones (see the image used as background for this page). The church belonged for centuries to Arciconfraternita dei Carcerati, a brotherhood providing assistance to prisoners. 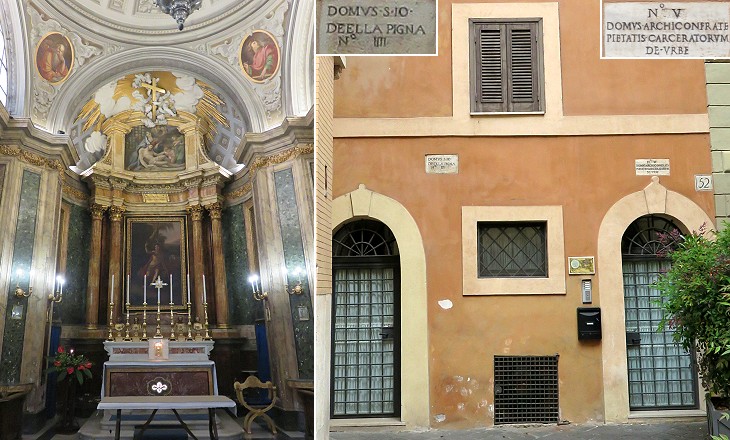 (left) Main altar; (right) two small houses adjoining the church which belonged to the brotherhood as stated by their property tablets 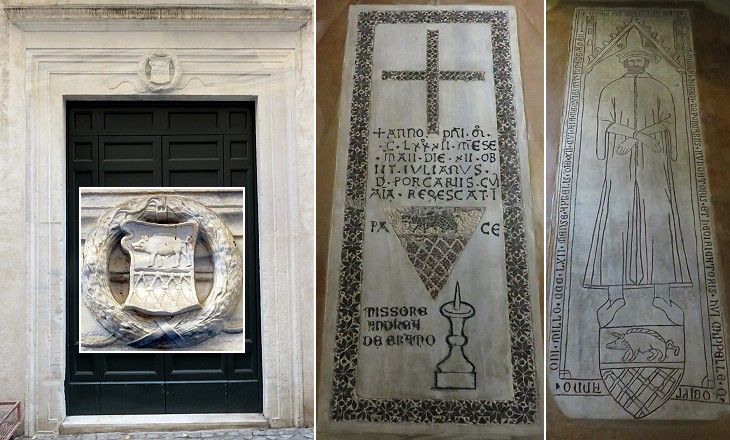 S. Giovanni della Pigna retains the gravestones of members of the Porcari family. They lived near the church. In 1453 Stefano Porcari made an attempt to revive the republican institutions of ancient Rome, similar to that made by Cola di Rienzo a century earlier. He and other conjurors planned to seize Castel Sant'Angelo, imprison Pope Nicholas V and declare the end of the Papal State. The plot was discovered and the houses of the Porcari were stormed by papal soldiers. Stefano Porcari was arrested and hanged. 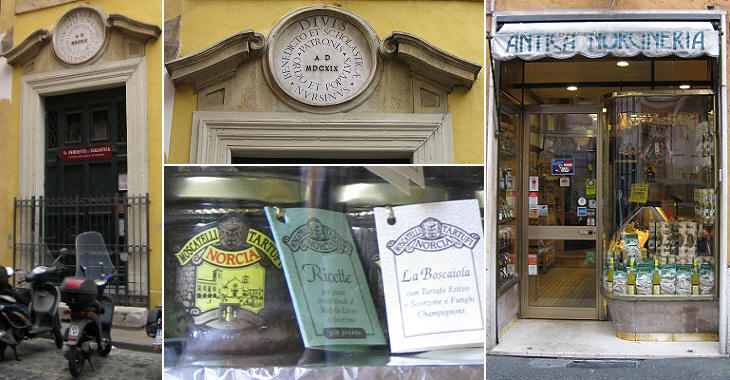 (left/centre) Door of the church and inscription; (centre/right) specialties of Norcia on sale in a "norcineria"

St. Benedict was born at Norcia, a town in Umbria, and the immigrants from Norcia in Rome dedicated to him and to his sister Scolastica a small church near Arco della Ciambella. They were known as skilled butchers with a reputation for hams and salamis: still today a few shops build on this reputation, although their best-selling products are based on tartufo nero di Norcia (black truffle). The church was part of a building which provided lodging to pilgrims and care for the sick of the community.
You may wish to see a directory of national churches in Rome. 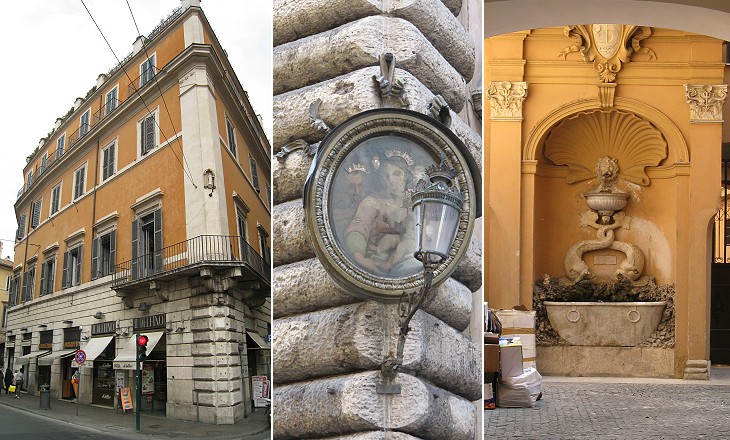 (left) Palazzo Datti; (centre) sacred image at the corner of Palazzo Sinibaldi; (right) fountain in a courtyard in Via di Torre Argentina

Most of the buildings in Via di Torre Argentina, the street marking the border between Rione Sant'Eustachio and Rione Pigna, have late Renaissance features, but the narrowness of the street makes it difficult to notice them. Palazzo Datti gained from the opening of Corso Vittorio Emanuele II in the late XIXth century, but not from the opening of shops. Palazzo Sinibaldi, another Renaissance palace, has one of the oldest sacred images of Rome inside an XVIIIth century frame. The courtyard of another building along the same street is embellished by a finely designed fountain.