- Palermo: Churches of the Main Orders
(left) Temple to Hercules at Agrigento; (right) detail of the apse of Palermo's Cathedral

You may wish to see an introductory page to this section or see a page on the churches of the medieval orders first. 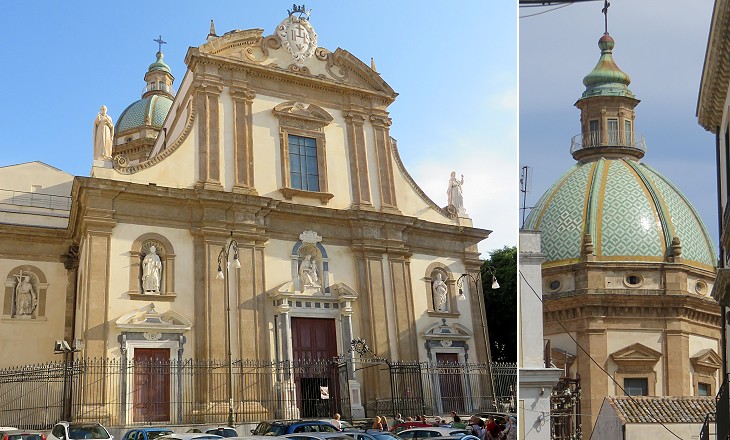 The Jesuits church is equal in magnificence to any thing I have seen in Italy. The genius of these fathers appear strong in all their works, one is never at a loss to find them out. They have been grossly calumniated for they certainly had less hypocrisy than any other order of monks.
Patrick Brydone - A Tour through Sicily and Malta in 1770.
In 1767 the Jesuits were expelled from Sicily and in 1773 Pope Clement XIV dissolved the order. Its decline in Sicily was rather sudden because records indicate that until 1765 the Jesuits had 35 convents and a number of other institutions on the island. 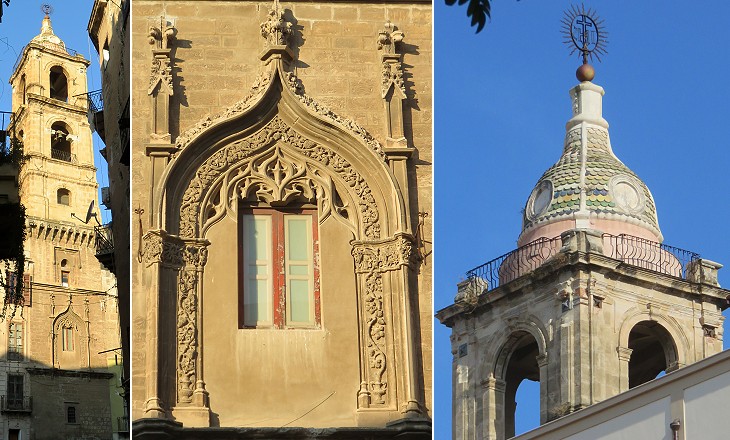 The church was redesigned in 1636 and the plan provided for two bell towers at the sides of the façade. They were not eventually built and in the XVIIIth century a bell tower was erected above Palazzo Marchesi, an existing XVth century building with a very fine Gothic window. 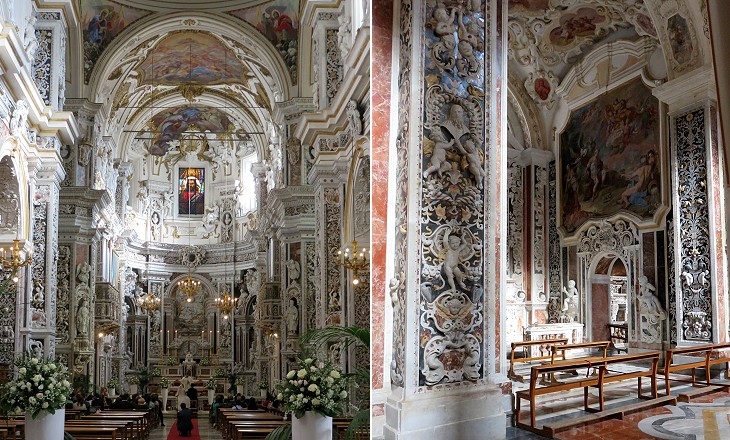 The Jesuits has not any columns; the walls are all covered with beautiful Mosaic and marbles alto relievos etc, and the ceiling and dome finely painted. The altars and chapels are rich. (..) The carving and marble work of this church are great curiosities.
Sir George Cockburn - A Voyage to Cadiz and Gibraltar: up the Mediterranean to Sicily and Malta in 1810/11.
The riches once possessed by the Jesuits shine conspicuous in this elaborate Edifice which abounds with costly and beautiful pietre dure.
Mariana Starke - Travels in Europe for the Use of Travellers on the Continent and likewise in the Island of Sicily - 1838 Edition - based on a travel to Sicily made in 1834. 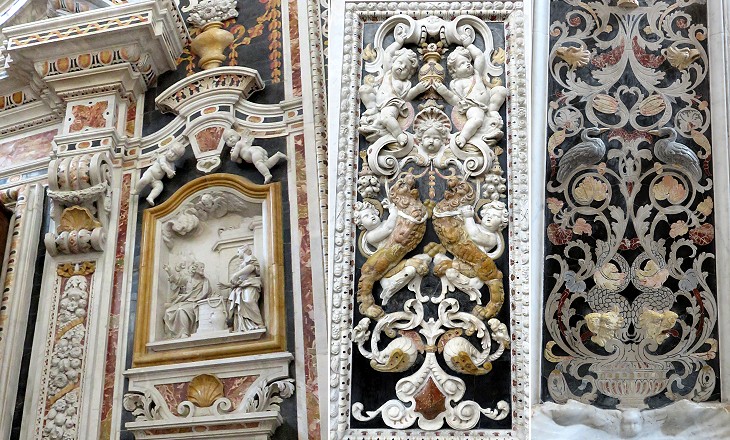 Gesù: details of the "marmi mischi" (mixed marbles) decoration which is characterized by marble inlays in which white/gold reliefs or decorations are placed on a blue/black background

Palermo Thursday, April 5, 1787. The style of architecture resembles for the most part that of Naples; but the public buildings, for instance the fountains, are still further removed from good taste. Here there is no artistic mind to regulate the public works; the edifices owe both their shape and existence to chance accidents. (..) The same nearly may be said of the churches, in which even the Jesuits' love of show and finery is surpassed - but not from design or plan, but by accident - just as artist after artist, whether sculptor or carver, gilder, lacquerer, or worker in marble chose, without taste or rule, to display on each vacant spot his own abilities.
J. W. Goethe - Italian Journey - Translation by Charles Nisbet
Some of the works of art which decorate the interior were added as late as 1762. 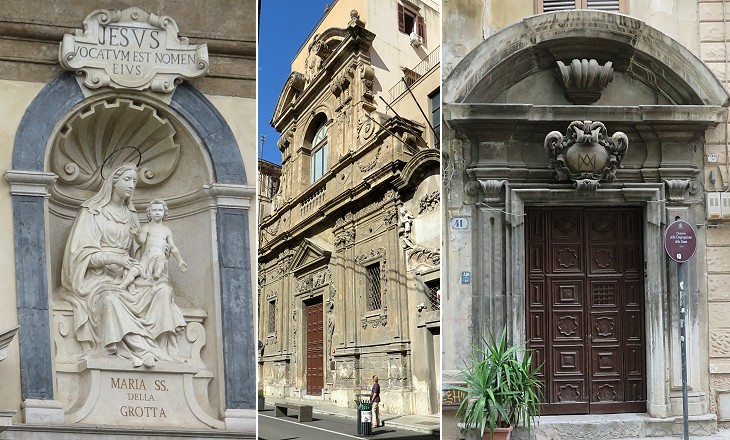 (left) Statue on the façade; (centre) S. Maria della Grotta and next to it a large 1705 inscription celebrating the improvements made to Il Cassaro, the main street of Palermo; (right) Oratorio delle Dame

The church was built on the site of a previous one which was assigned to the Jesuits in 1554 by Emperor Charles V. It was named after a Byzantine icon which was kept in a crypt, hence grotta (cave). In 1588 the Jesuits opened a college along Il Cassaro and they eventually built an adjoining church named after the ancient one. They also promoted the activities of confraternities, one of which was reserved to ladies who met every week in an oratory near Gesù under the spiritual leadership of a Jesuit priest. The confraternity is still active and it helps women in need. 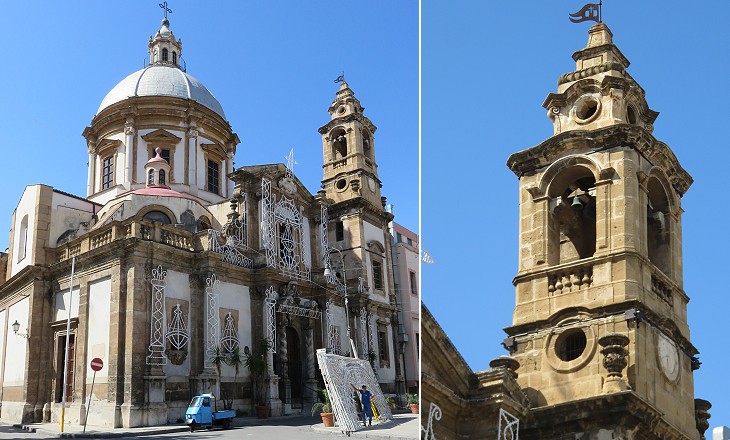 Similar to Andrea Pozzo in Rome, Angelo Italia was a Jesuit Brother who was involved in the design and decoration of churches. In 1672 he designed Cappella del Crocifisso in the Cathedral of Monreale and in 1685 he developed the project for S. Francesco Saverio, which is regarded as his masterpiece. His other works were at Catania (S. Francesco Borgia - it opens in another window) and other towns of the island. He was involved in the redesign of the urban layout of Noto which was razed to the ground by a major earthquake in 1693. 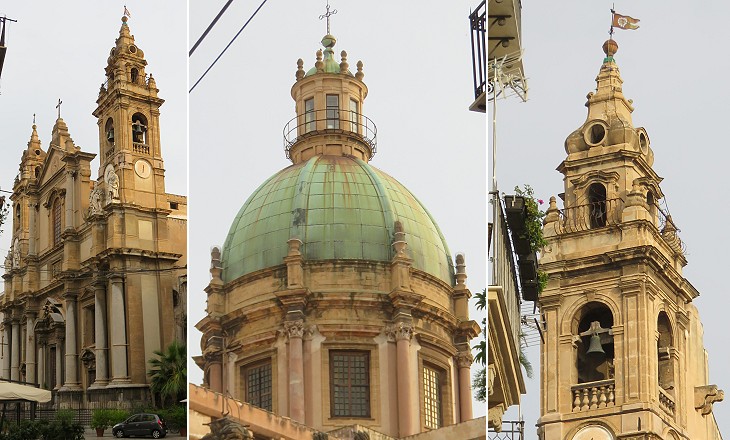 The usual name by which the church is known suggests it was built by the Jesuits and dedicated to the founder of their Order similar to what occurred in Rome. It is not so because the church was dedicated to St. Ignatius of Antioch, a martyr of the early IInd century whose remains are kept at S. Clemente in Rome. The church was built by the Oratorians of St. Philip Neri and the 1711 dedication of the church to the rather obscure martyr can be read as a nasty trick to the Jesuits, an indication that relationships among the main Catholic orders were not idyllic, as they competed for members, prestige and influence.

In regard to plan, the Olivella is, perhaps, superior to most of the churches in Palermo. It is now modelling, in a very elegant style of modern Arabesque painting and gilding: better adapted, perhaps, to a palace than to a church. The lightness and beauty of the design, however, relieves the eye, after surveying the other churches, so loaded with marbles and basso relievos.
Sir Richard Colt Hoare - A Classical Tour through Italy and Sicily - published in 1819.
Olivella was a scarcely populated part of the Castellammare historical quarter. Its name came from Latin olim villa (once a villa/vineyard). 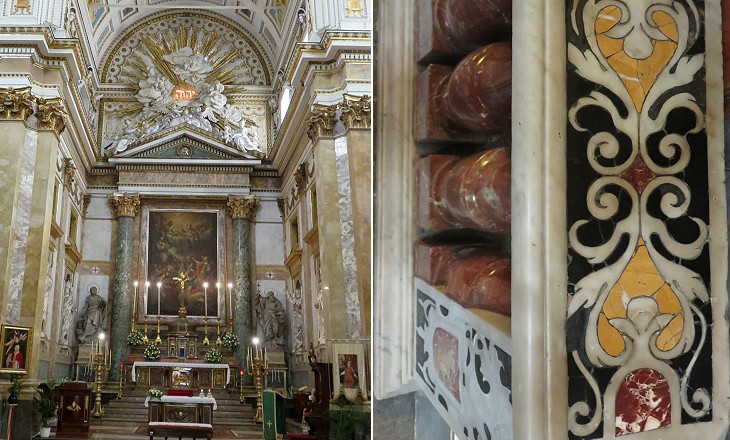 Unlike other important churches of Palermo the decoration of S. Ignazio Martire is not mainly based on marmi mischi. The Oratorians chose to use precious marbles in a more traditional way. 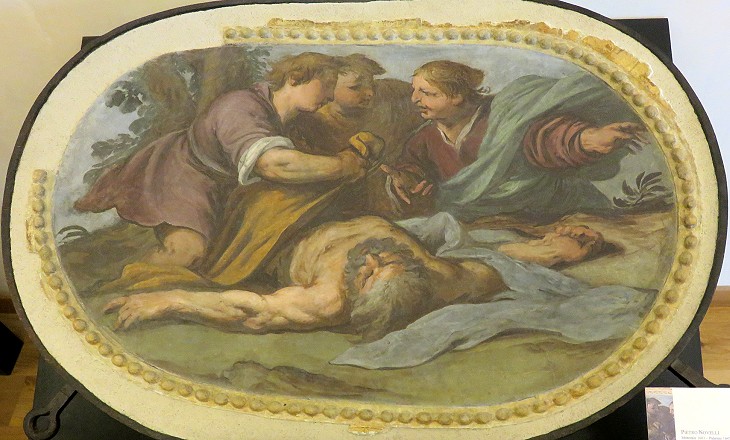 Sicily had an artist of distinction in Pietro Novelli, called 'il Monrealese' (1603-47), who abandoned his early Caravaggesque "tenebroso" (dark background) in the early 1630s, after he was influenced by Van Dyck's visit to Palermo (1624) and under the impact of a journey to Naples and Rome (1631-32).
Rudolf Wittkower - Art and Architecture in Italy 1600-1750 - Penguin Books 1958
Pietro Novelli was highly praised during his lifetime and his works can be found in very many churches and palaces of Palermo. He belonged to the Baroque classical school which in Rome was represented by Andrea Sacchi. 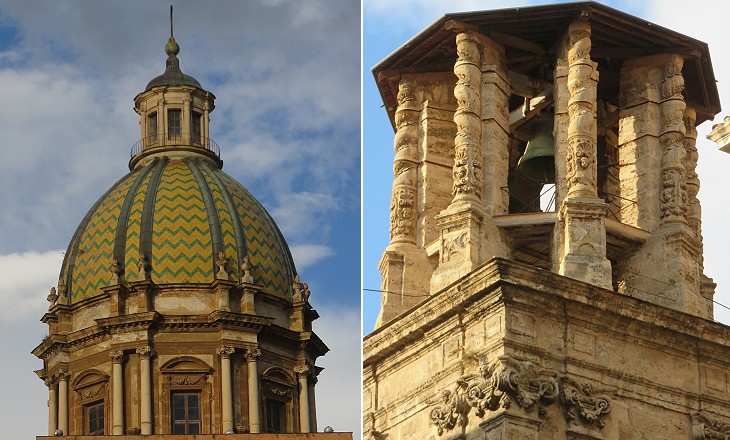 S. Giuseppe dei Teatini: (left) dome; the image used as background for this page shows its interior; (right) very unusual bell tower (it was not completed) seen from Piazza Pretoria

Sia povera la cella, sobrio il vitto, ma ricca la chiesa. (The cell should be modest, the food moderate, but the church should be rich) is one of the recommendations St. Cajetan made to the Theatines, the members of the order he founded in 1524. Definitely some of the churches built in the XVIIth century by the Theatines, including S. Andrea della Valle in Rome, complied with the wishes of St. Cajetan.
The entrance is from the octagon in the centre of Palermo where the Cassero and Strada Nuova intersect. (..) The dome is also beautiful and there are some tolerable pictures. Cockburn 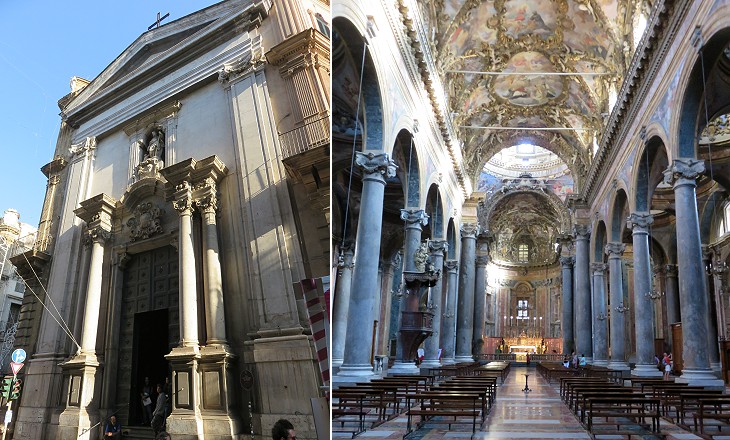 The church of St. Giuseppe is a fine building, and remarkable for the size of its columns. They are of Sicilian marble, each in a single block; and eight, which are larger than the rest, are really magnificent. Colt Hoare
It is as beautiful a church as I ever saw; the great altar is rich and magnificent, the marble work as fine as can be conceived: the greater part of the church is paved with marble and the painting and ornaments of the ceiling are very grand: all the side altars are likewise chefs d'oeuvres in marble. There are twenty four most beautiful columns: eight are very large; the shafts of one piece and of Palermo marble: an arch is turned from column to column on which the church is supported and they have a grand and most magnificent appearance. Cockburn 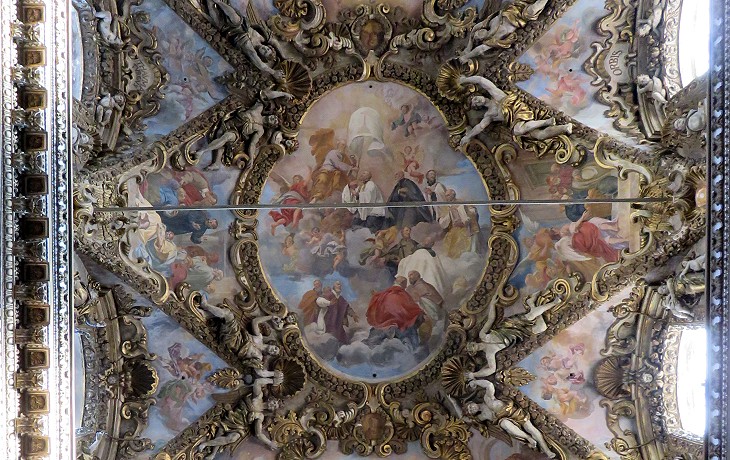 The ceiling of the nave was designed and painted towards the end of the XVIIth century and it reflects patterns which were developed in Rome, both in the use of stuccoes and in that of illusionistic paintings (you may wish to see a page on this topic). 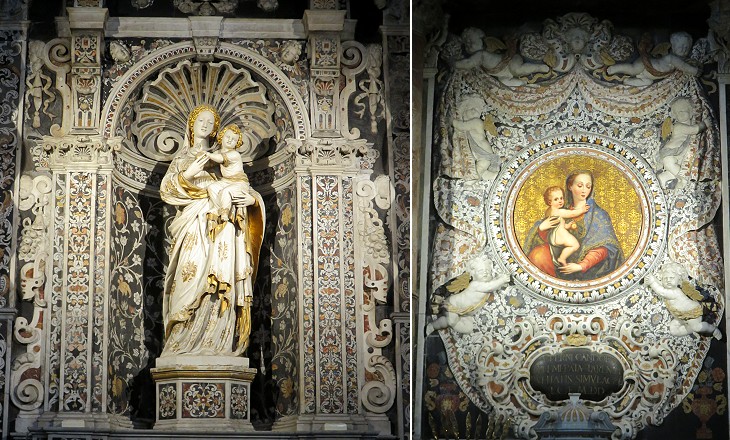 S. Giuseppe dei Teatini: (left) Cappella della Madonna di Trapani with an early XVIth century statue by Antonello Gagini; (right) Madonna della Purità: very similar to an oil on canvas by Luis de Morales, a famous Spanish painter, which was donated to the Theatines in 1541 for their church in Naples

Move to see the churches of the medieval orders.