Chiesa di S. Maria in Vallicella
(Vasi at work in the Grand View of Rome)

Links to this page can be found in Book 7, Map C2, Day 4, View D5, Rione Ponte and Rione Parione. 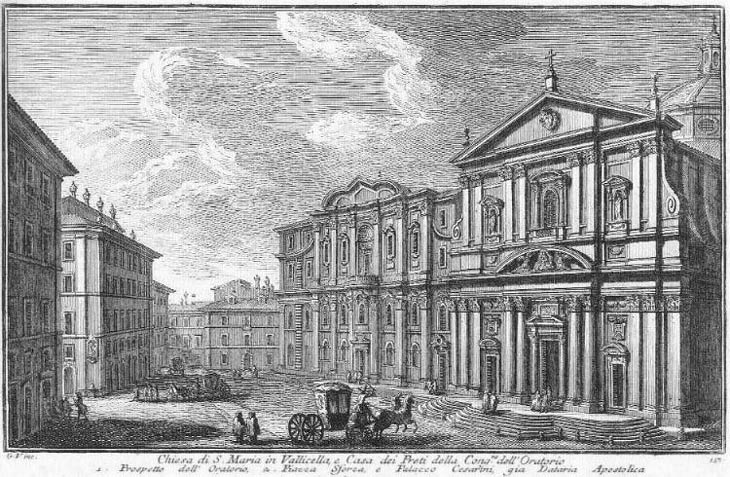 In 1756 Giuseppe Vasi published his seventh book of etchings which contained views of some of the most imposing churches of Rome. Their size and decoration were meant to visually show the importance of the religious order to which they belonged. This was true in particular for some orders founded in the XVIth century, e.g. the Jesuits (Chiesa del Gesù), the Theatines (S. Andrea della Valle), the Barnabites (S. Carlo ai Catinari) and the Congregation of the Oratory of St. Philip Neri (S. Maria della Vallicella). These four churches were all built at a short distance from each other. After the opening of Corso Vittorio Emanuele in 1887 Chiesa del Gesù, S. Andrea della Valle and S. Maria in Vallicella are all situated in the same street.
The view is taken from the green dot in the 1748 map below. In the description below the plate Vasi made reference to: 1) Oratorio dei Filippini; 2) Palazzo Sforza Cesarini. 2) is shown in another page. The map shows also 3) Piazza dell'Orologio; 4) S. Maria in Vallicella; 5) Palazzo di Sora; 6) Palazzo Boncompagni Corcos; 7) Palazzo Cerri; 8) Palazzo Capponi Stampa; 9) Palazzo Caccialupi. The dotted line in the small map delineates the border among Rione Ponte (upper part), Rione Regola (left lower quarter) and Rione Parione (centre). 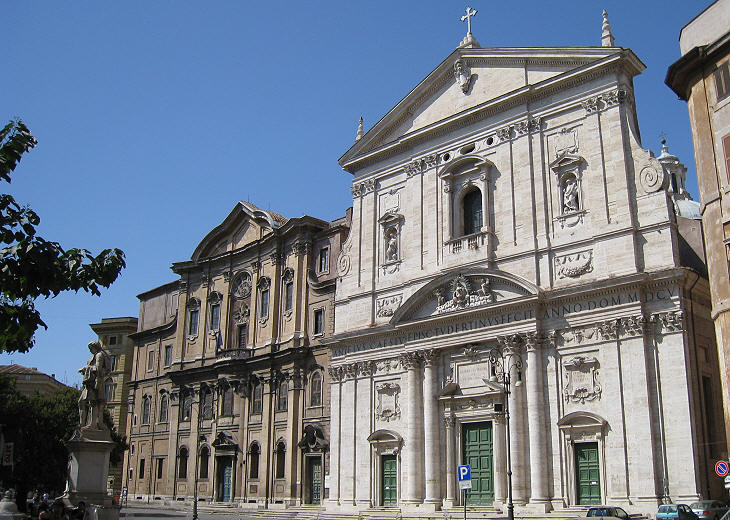 Piazza della Chiesa Nuova was enlarged in the 1880s by pulling down the buildings located on its southern side; this had no impact on the church and the adjoining oratory. In 1910 the square was embellished with a monument to Metastasio, an XVIIIth century poet and librettist, who was born in nearby Via dei Cappellari and in 1925 Fontana della Terrina was relocated from Campo dei Fiori to this square. 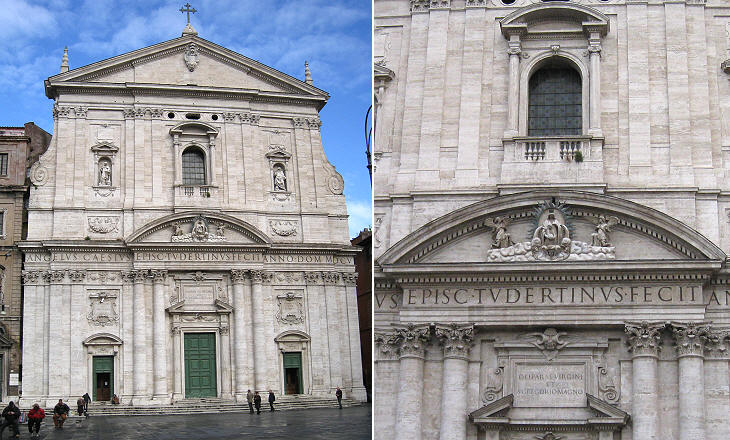 Vallicella means small valley and it is a reference to a depression which existed at the time of Ancient Rome and which was thought to be an entrance to Hades, the Underworld. Excavations have identified the remains of Ara Ditis et Proserpinae, a platform with an altar dedicated to Dis (Pluto) and Proserpina. The depression was still noticeable in the XIIth century when a church built in this location was recorded as S. Maria in Vallicella. When in 1575 Pope Gregory XIII assigned the church to St. Philip Neri the building was almost buried in the ground, because floods had raised the level of the latter. It was therefore decided to build a new church on the site of the old one. For this reason the church became (and is) more commonly known as Chiesa Nuova.
The construction of the new church was completed in 1606 and several architects were involved in its design (the façade is by Fausto Rughesi). Cardinal Pier Donato Cesi and after his death in 1586, his brother Angelo made significant donations. They had large possessions in Umbria. 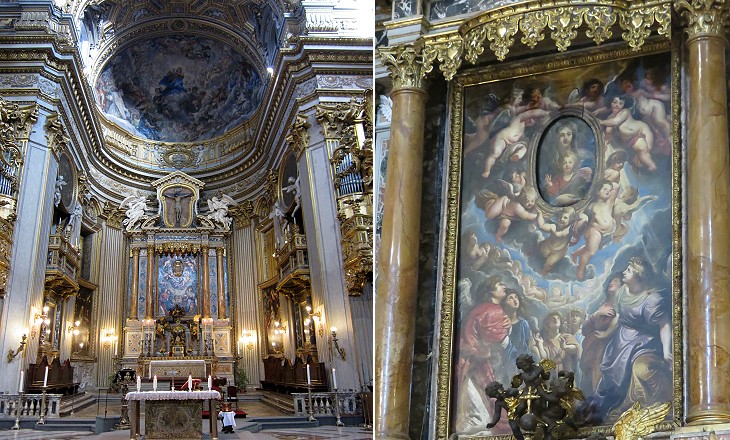 (left) Main altar, a detail of which can be seen in a page dealing with the use of colour in Roman churches; (right) altarpiece by Peter Paul Rubens with a movable section (1608)

At the age of 23 Peter Paul Rubens left Antwerp and began a long period of study and work in Italy (1600-608) where he visited Venice, Mantua, Genoa and Rome. His altarpiece at S. Maria in Vallicella was painted on slate and it had an opening to allow the viewing of a detached fresco portraying the Virgin Mary. The cover was painted on copper and it is removed during some celebrations. Rubens greatly enjoyed his Italian stay and he Italianized his name in Pietro Paolo. In 1612 out of his admiration for ancient Rome he painted The She-wolf tenders Romulus and Remus which became the best known image of that legendary event. 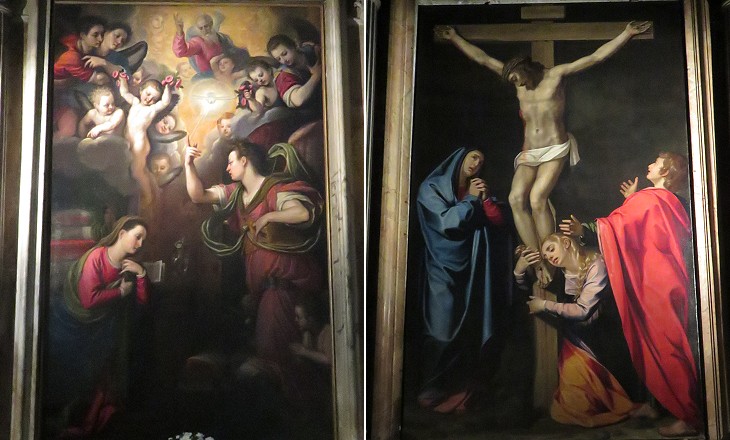 Many chapels of the church were already decorated before the completion of the façade. Their altarpieces are a repertory of paintings of the late XVIth century. That by Passignano anticipates patterns, such as the illusionistic depiction of Heaven, which will prevail during the following century, while that by Pulzone is much more composed and the dark background helps the viewer focusing on the small number of subjects, a characteristic of many paintings by Caravaggio, e.g. Madonna dei Pellegrini. The ceiling of the main nave was decorated with stuccoes and paintings in 1647-666. You can see it with other ceilings in a separate page. Two very elaborate organs were built in 1700 and they too can be seen in a separate page dealing with this topic. 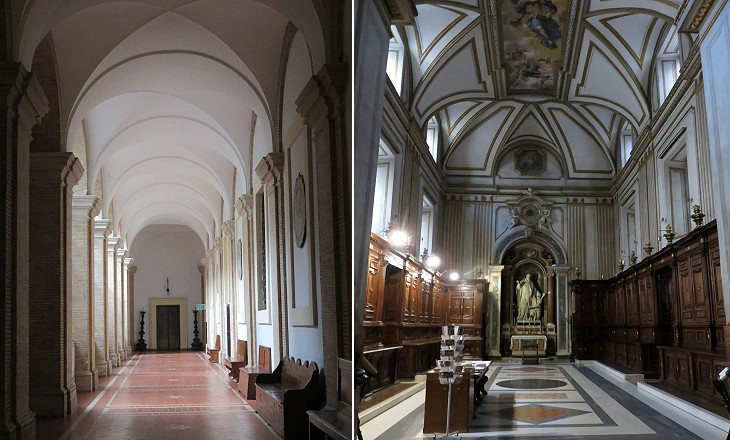 (left) A wing of the courtyard; (right) Sacristy

On the 8th November 1644: We went into the sacristia, where, the tapers being lighted, one of the Order preached; after him stepped up a child of eight, or nine years old, who pronounced an oration with so much grace, that I never was better pleased than to hear Italian so well and so intelligently spoken. This course it seems they frequently use, to bring their scholars to a habit of speaking distinctly, and forming their action and assurance, which none so much want as ours in England.
John Evelyn's Diary and Correspondence 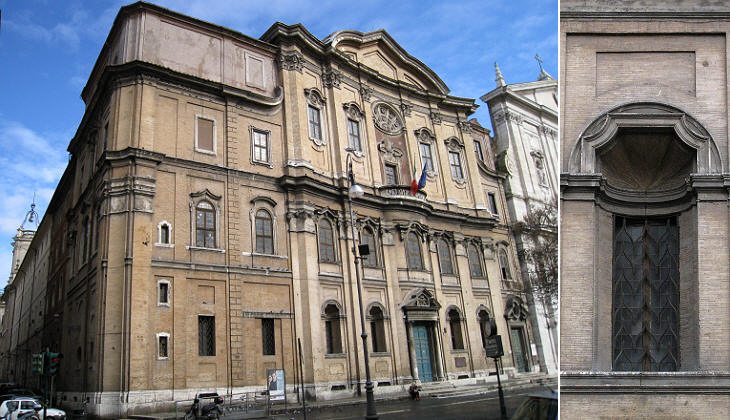 (left) Façade and side on Via dei Filippini; (right) detail of a window

St. Philip Neri founded a congregation of Catholic priests and lay-brothers, whose members are commonly referred to as Oratorians, but in Italy for some time they were called Filippini, after the name of the founder. The congregation acquired a large membership and it was decided to build a series of facilities (including a library) next to S. Maria in Vallicella. In 1637 Francesco Borromini was charged with the design and construction of these facilities; as a sign of modesty the congregation required that neither marble nor travertine were to be used for the decoration of the building, yet the architect was asked to give an imposing appearance to the side adjoining the church. In order to achieve this objective Borromini designed a façade which is not related just to the small oratory, but it includes also the library and other parts of the complex and he used low flat bricks similar to those employed by the ancient Romans. 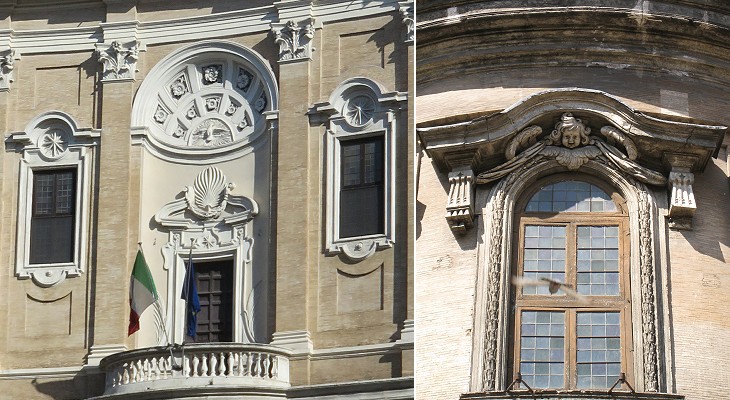 In the design of the façade Borromini made use of a combination of concave and convex lines which characterizes many of his works. He based its decoration on the use of stucco. He experimented new shapes for the frames of the windows and made use of heads of cherubs as an architectonic element.
Oratorio dei Filippini was the second large commission received by Borromini (the first being S. Carlo alle Quattro Fontane).
You may wish to see Schwarzspanierkirche, a church in Vienna with a façade resembling that of the Oratorio and some details of St. Paul's Cathedral which show the influence of Borromini. 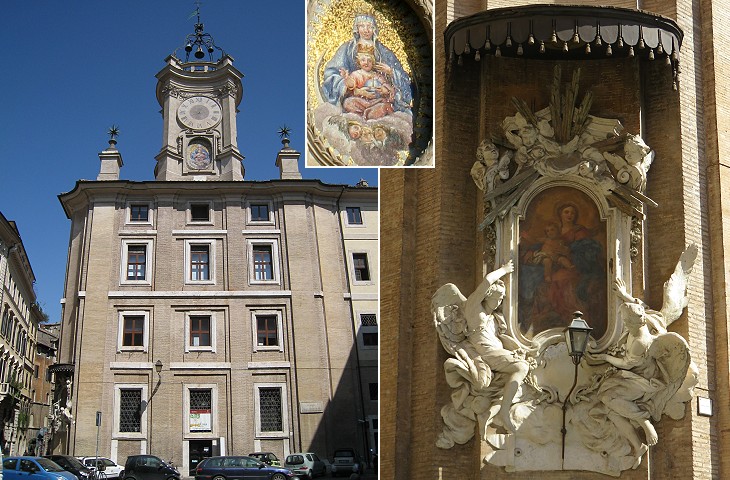 In 1647-650 Borromini designed a small façade of the Filippini complex overlooking a square in Via dei Banchi Nuovi (a street named after Palazzo del Banco di S. Spirito). While the design of the lower part is very sober, the turret with the clock is characterized by concave and convex lines.
In his guide of Rome, Vasi mentions tre magnifici palazzi (three magnificent palaces) in Piazza dell'Orologio. The most famous one was Palazzo di Santo Spirito, designed by Borromini as headquarters for Banco di S. Spirito, the papal bank, at the request of Virgilio Spada, who was at the head of the bank. Eventually the offices of the bank were located in another palace by the same name and the palace was bought by the Spada. Unfortunately in the late XIXth century it was almost totally modified. You may wish to see it in a sketch by Borromini - it opens in another window. 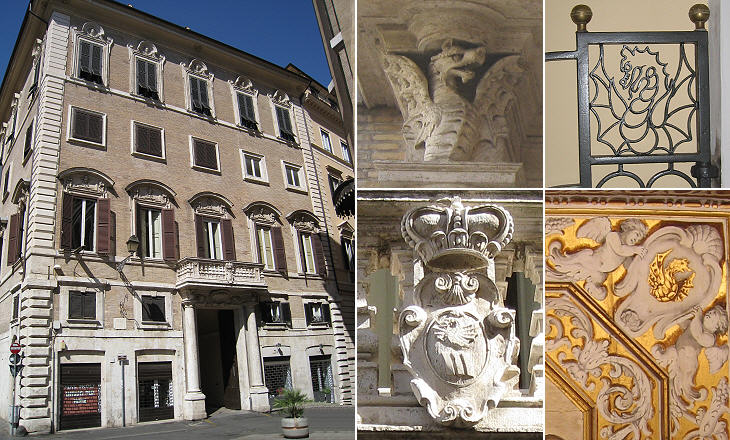 (left) Façade; (right) details showing the dragon of the Boncompagni

The second palace Vasi had in mind is Palazzo Boncompagni Corcos. In the second half of the XVIth century the Jews living in the Papal State, in addition to laws forcing them to live in restricted areas in Rome and Ancona, had to face a strong pressure aimed at converting them. In 1582 Solomon Corcos, a rich Jew, abandoned his faith and his name and became Gregorio Boncompagni after the name of Pope Gregory XIII Boncompagni. His heirs built in the XVIIth century an elegant palace in Piazza dell'Orologio. The palace is decorated with many dragons, the heraldic symbol of the Boncompagni and its interior has some fine paintings by Carlo Cesi.

The Chariot of Sun - ceiling painted by Carlo Cesi (ca 1660) 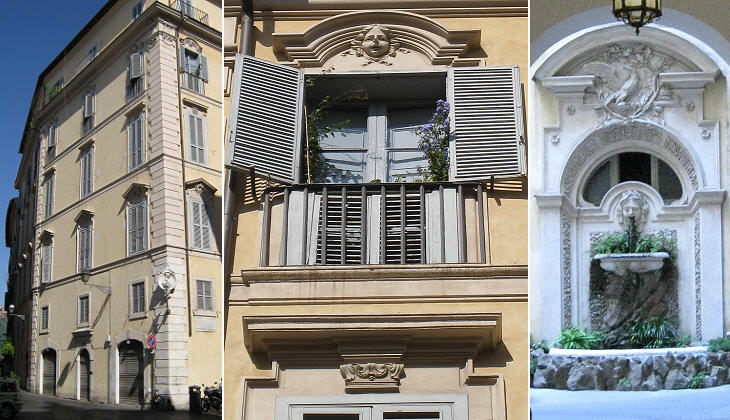 (left) Façade in Piazza dell'Orologio; (centre) detail of a window; (right) fountain in the courtyard

The third palace has various names, due to its many owners. Initially it belonged to the Orsini, who had a nearby palace/fortress, then it was acquired by the Capponi, an important Florentine family. Its elegant stucco decoration was added by the Stampa, a family from Milan, in the early XVIIIth century (you can see a detail of the portal in a page dedicated to the Laughing Masks of Rome). 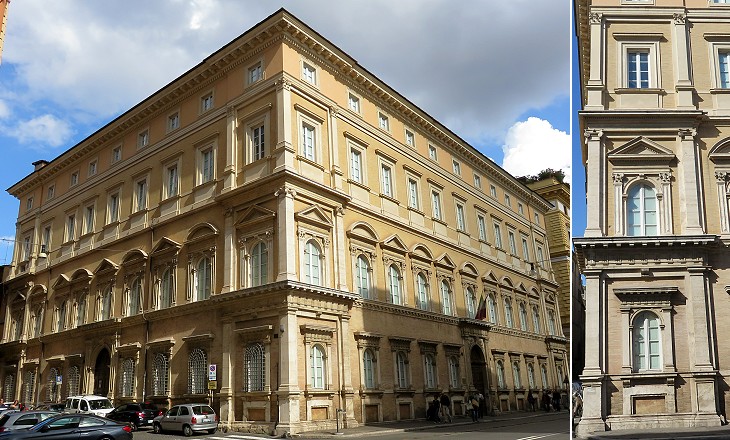 (left) Palazzo di Sora with the original façade on the left and the modern one on the right; (right) detail of one of its corners which is decorated with the three classical orders

Palazzo di Sora was built at the beginning of the XVIth century and Vasi wrote that it was designed by Donato Bramante, but today this attribution is thought to be inaccurate. The palace was regarded as a sort of architectural summary because it was decorated with the three classical orders, similar to Colosseo. In 1579 it was bought by Pope Gregory XIII for his son Giacomo Boncompagni, Duke of Sora, a town in the Kingdom of Naples, not far from Casamari and very near the border with the Papal State; the full name of the palace should have been Palazzo Boncompagni di Sora, but it was shortened in Palazzo di Sora.
The palace stood exactly on the site where Corso Vittorio Emanuele was opened and only its northern section was spared; a new façade which follows the pattern of the old one was built along the new street. 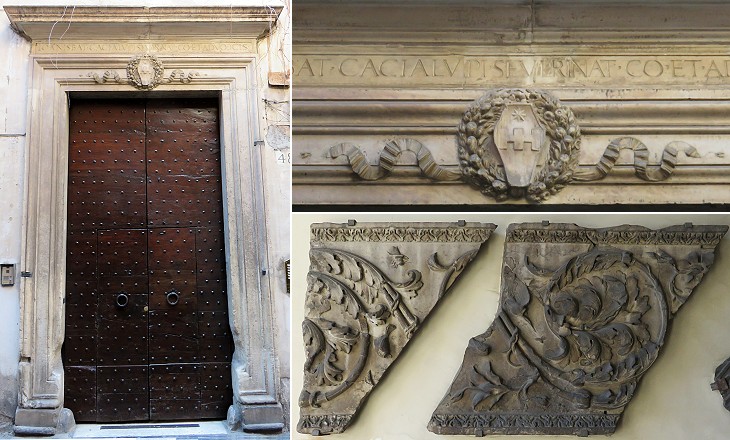 Palazzo Caccialupi, a Renaissance house with a fine and decorated portal, is located in a narrow alley behind Palazzo di Sora. It was built in ca 1488 by Giovanni Battista Caccialupi from San Severino who at that time and as reported by the inscription was avvocato concistoriale, i.e. he could plead a case in the highest court of the Papal State. He is best known for a number of repetitiones (lessons) on civil law which he delivered at the University of Siena where he taught for thirty years. 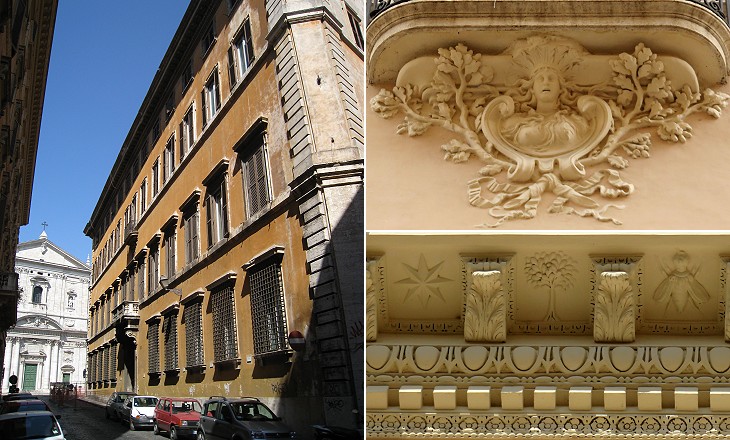 (left) Original façade in Via Larga; (right) details of the upper balcony (above) and of the cornice (below)

Palazzo Cerri, similarly to Palazzo di Sora lost nearly half of its original size and it was given a new façade opposite S. Maria della Vallicella. The original entrance is in what today seems a narrow street, but at the time was regarded as a large one and thus was called Via Larga. As a matter of fact if one looks at the 1748 map the street is larger than the other ones. It was opened in 1627 to facilitate the access to the church from Via del Pellegrino. The design of the palace is generally attributed to Francesco Peparelli. You may wish to see its laughing masks. The most important member of the Cerri family was Cardinal Carlo Cerri (1610-690). You may wish to see his portrait by Jakob Ferdinand Voet at the National Gallery of London - it opens in another window.