in the Churches of Rome
(detail of the ceiling at S. Ignazio)

The ceilings of most large churches erected in Europe and in Italy between 1100 and 1500 showed the architectural structure of the building. In Rome the churches had little vertical thrust and usually the main nave was covered by an unattractive hut-like roof, supported by long beams. A change came about in the second half of the XVth century, when wooden ceilings were introduced which covered the naves of the churches, closing the sight of the roof. One of the first and most celebrated wooden ceilings was designed by Giuliano da Sangallo in S. Maria Maggiore towards the end of the XVth century (the gold used for the decoration - a gift from the King and the Queen of Spain - was the first to come from the American colonies). 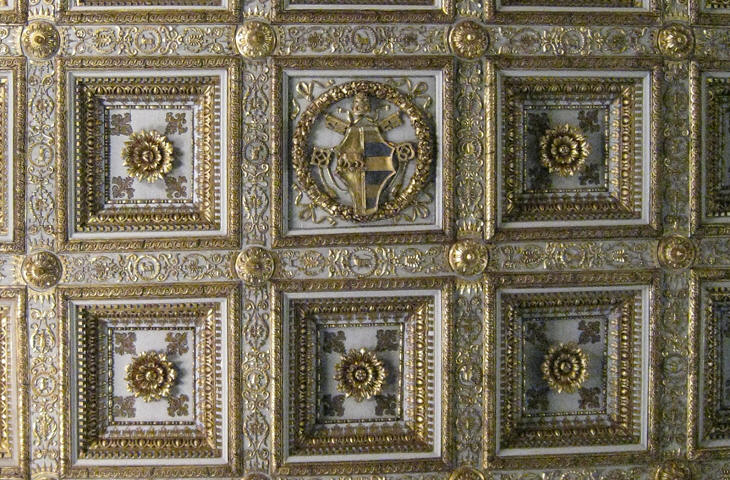 S. Maria Maggiore: Detail of the ceiling with the coat of arms of Pope Alexander VI

The ceiling in S. Maria Maggiore served as a model for the ceilings of the main naves of S. Pietro in Vaticano (XVIIth century) and S. Paolo fuori le Mura (XIXth century). These ceilings are called lacunar ceilings as they are decorated by painted or gilded cavities. 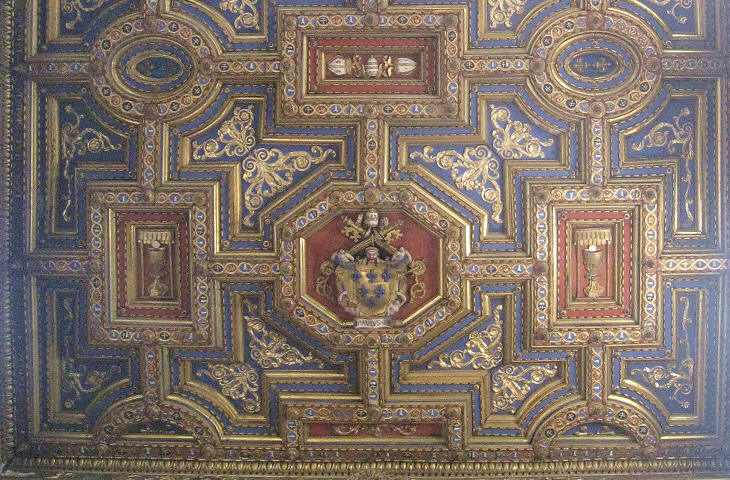 S. Spirito in Sassia: Detail of the ceiling with the coat of arms of Pope Paul III

At first the cavities (lacunae) had a regular quadrangular shape which highlighted the structural elements of the ceilings, but in the XVIth centuries this type of ceilings evolved and the shape and number of the lacunae were only dictated by decorative purposes. The lacunae housed coats of arms and other religious symbols. The success of these ceilings was constant through the whole XVIth century and well into the first decades of the XVIIth century (ceiling of S. Sebastiano fuori le mura - 1611). Even after this period lacunar ceilings continued to be highly regarded. Pope Innocent X forbade Borromini to modify the lacunar ceiling of S. Giovanni in Laterano when he commissioned a large restoration of the basilica interior. 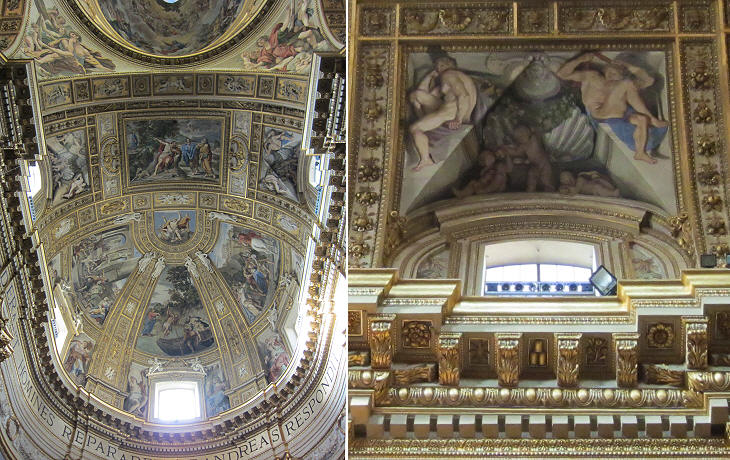 S. Andrea della Valle - Ceiling of the apse by Domenichino 1622-28 - Detail of a naked figure

The large churches built in Rome towards the end of the XVIth century had a different structure. They were closed by a vault similar to that of the Sixtine Chapel and when, usually some decades after the completion of the church, the issue of how best these ceilings should be decorated, the approach followed by Michelangelo in the Sixtine Chapel influenced the final decision. Domenichino (1581-1641) designed the ceiling over the apse of S. Andrea della Valle in 1622-28 when he was at the peak of his fame. He was the leader of the classical school and his neat partition of the space which clearly identified the painted spaces and the paintings themselves echoing ancient statues were considered a masterpiece. They were especially highly praised in the late XVIIIth century and during the whole XIXth century when a visit to S. Andrea della Valle was a "must" for any cultivated traveller. Domenichino paid homage to Michelangelo in the naked figures above the windows. He also made use of stucco statues on a gilded background: these statues are shown in the act of supporting the ceiling. The technique of using stucco had just been improved by adding to the mixture finely powdered marble. The statues of this ceiling appear very rigid and stuck to the ceiling. 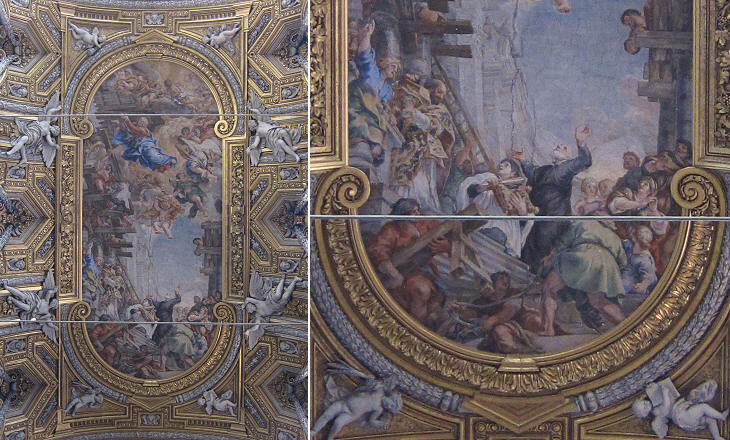 Some twenty years later Pietro da Cortona was commissioned the decoration of the ceiling of the main nave, of the dome and of the apse of S. Maria in Vallicella. The task was completed over a long period of time, during which the artist worked also in Florence at the decoration of Palazzo Pitti. In the ceiling of the nave the painted area is clearly separated from the gilded-stucco decoration and this is a point in common with the ceiling of S. Andrea della Valle. But Pietro da Cortona designed a much more complex decoration. The stucco angels and putti were commissioned to scholars of Bernini who modelled them using a metal skeleton so that the statues look detached from the ceiling. The painting is marked by two distinct parts, but within each of them a crowd of figures mark Cortona's departure from the classical canons which recommended a limited number of clearly identifiable figures. The painting shows a miracle of St. Philip Neri, a saint of the Counter Reformation, thus a very new subject, and this is another difference versus S. Andrea della Valle where Domenichino could rely on the vast traditional iconography covering St. Andrew's life. 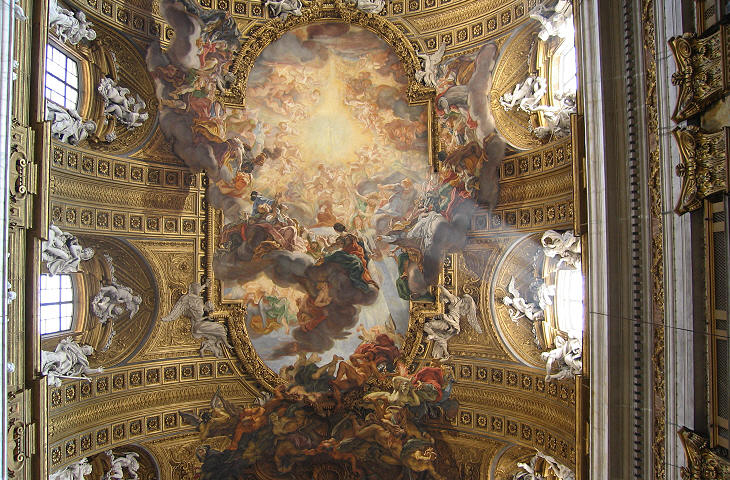 Some key aspects of Cortona's ceiling were brought to their extreme consequences by Baciccio in the ceiling of the nave of il Gesù. The Genoese painter came to Rome in 1660 and he soon became familiar with Bernini and his scholars. The design of the ceiling was suggested by Bernini, who had always been a supporter of combining architecture, sculpture and painting to impress the viewer. Here too we have a painting included in a cornice supported by stucco angels on a background of gilded decoration; and the painting (the Triumph of Jesus's name) is clearly divided into two parts, but the overall effect is much more dramatic.

In the upper part of the ceiling the separation between painting, statues and decoration is very neat. The most striking aspect is the fact that the angels appear to be floating in the air. They were designed by two of the most talented younger scholars of Bernini (Antonio Raggi and Leonardo Retti).

Il Gesù - Details of the painting by Baciccio

In the lower part of the ceiling all distinctions are forgotten. The mass of evils falling into Hell sweeps away the cornice and the angels and throws a shadow on the decoration. The sides of the cornice are broken by clouds upon which saints glorify Jesus's name; to add to the illusion Baciccio painted the shadow of the clouds on the gilded decoration. Today movies and TV have made us familiar with all sorts of visual tricks, but until the beginning of the XXth century viewers sat amazed under this illusionistic masterpiece, which, notwithstanding its being against all neoclassicist rules, was constantly praised by all travellers. This ceiling is considered a sort of watershed between Baroque and Late Baroque: the religious purpose of a work of art will gradually fade out and its technical, theatrical aspects will prevail. 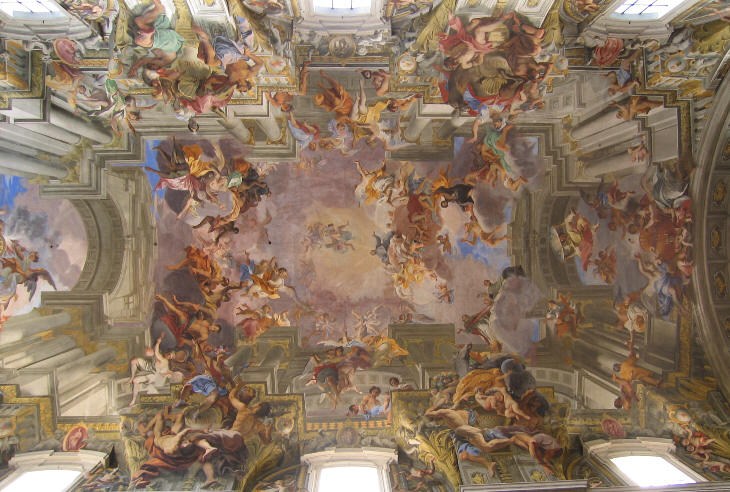 The Jesuits had another very large church in Rome: S. Ignazio. Its construction had gone on for a very long time, with the Jesuits asking for the advice of too many architects. The design of S. Ignazio included a dome at the intersection between the main nave and the transept, but at a certain point the Jesuits realized that the dome was no longer consistent with the already built parts of the church. As an interim solution they asked a Jesuit painter, Andrea Pozzo to cover the ceiling above the intersection between nave and transept with an apparent dome. The illusionistic effect reached by Pozzo was so satisfactory that S. Ignazio never got a dome and Pozzo was commissioned the decoration of the main nave.
Pozzo was expected to show again his illusionistic skills and he fully met these expectations. The entablature of the cornice, i.e. the framing of the ceiling among painted columns and architraves was not unusual, but Pozzo designed a sort of open ancient temple framing the sky with a myriad of figures, including allegories of the four continents. The subject of the painting - St. Ignatius' glory - is just a scene at the center of the ceiling.

The illusion is perfect from any point in the nave, but the viewer is impressed by the skill, not by the drama, and ends by looking at the details, by testing the view of columns and arches from different angles. Pozzo wrote a book on perspective laws Perspectiva pictorum and architectorum which had a lasting influence on scenographers throughout the XVIIIth century. 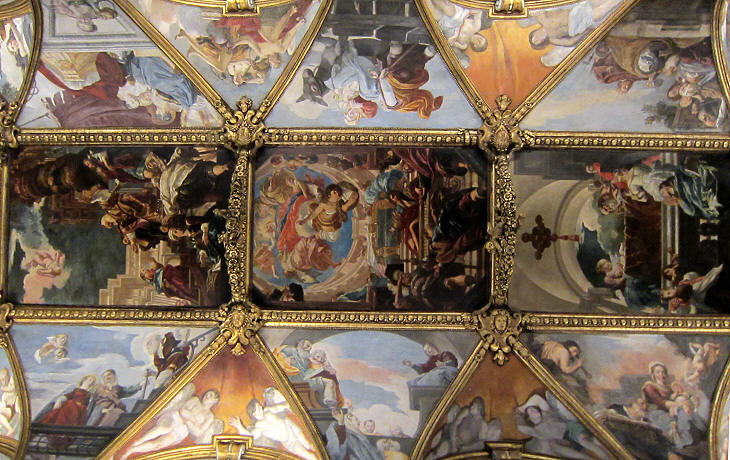 Interesting ceilings can be found also in some smaller churches. Antonio Gherardi designed a very light gilded frame for its paintings which fully cover the ceiling of S. Maria in Trivio. Gherardi travelled extensively in northern Italy and worked with Pietro da Cortona. His paintings in S. Maria in Trivio show a combination of Venetian colours and clever usage of perspective laws. 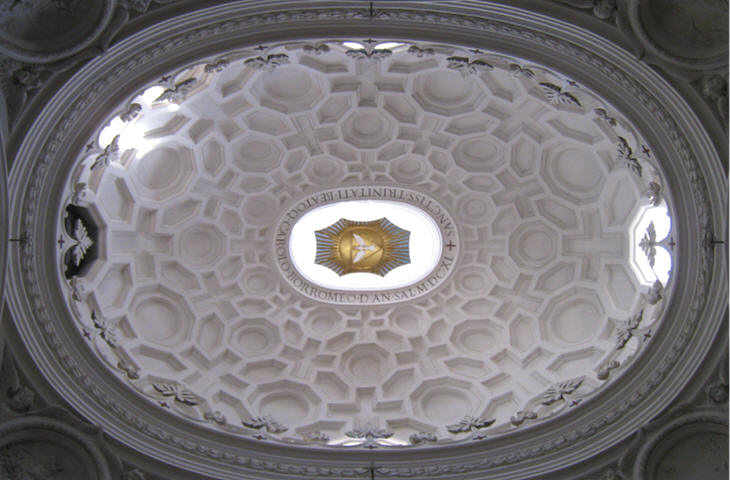 Whilst the ceilings of most churches were being decorated as shown above, some architects, including Borromini, Pietro da Cortona and Bernini, preferred ceilings which had a close relationship with the structure of the church.