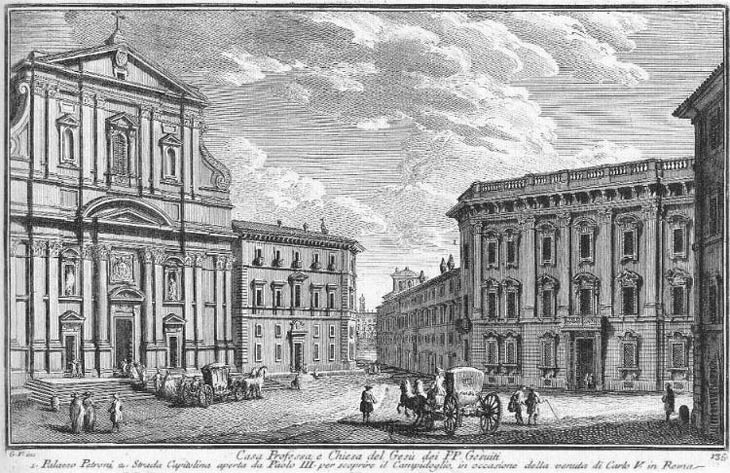 Giuseppe Vasi was personally involved in the marketing of his etchings and he did not refrain from making some small adjustments to the actual views in order to improve sales. The street opened by Pope Paul III to provide an appropriate entrance to Piazza del Campidoglio for a visit by Emperor Charles V, was not perfectly aligned with the steps leading to that square, but Vasi knew that by showing them and the bell tower of Palazzo Senatorio, he would have made the plate more interesting. In 1756, when he published the etching, the Jesuits were not highly popular in many European countries, so he placed the street leading to Campidoglio at the centre of the view, rather than the Jesuit church. By doing this he gave relevance to Palazzo Petroni which had been recently redesigned by Ferdinando Fuga, the leading architect of the time.
The view is taken from the green dot in the 1748 map below. In the description below the plate Vasi made reference to: 1) Palazzo Petroni; 2) Street leading to Campidoglio. The map shows also 3) Chiesa del Gesù; 4) Piazza del Campidoglio; 5) Casa Professa; 6) Palazzo Celsi Viscardi. 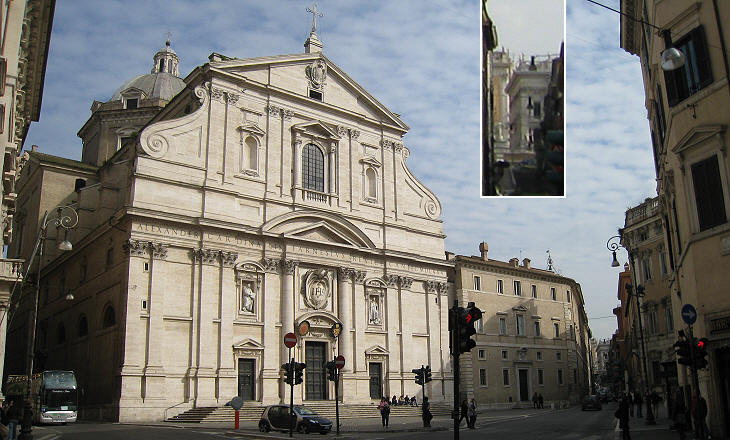 The view in March 2010; to the far left Palazzo Altieri; (inset) enlargement showing the part of Piazza del Campidoglio which is actually visible from Piazza del Gesù

Today the street between il Gesù and Palazzo Altieri is very busy and traffic lights are necessary to allow pedestrians safe crossings, but this is the only sign of the present time, because the small square in front of il Gesù was not impacted by the opening of Corso Vittorio Emanuele II in the late XIXth century. The new street begins from this square and it leads to Ponte Vittorio Emanuele II and the Vatican. 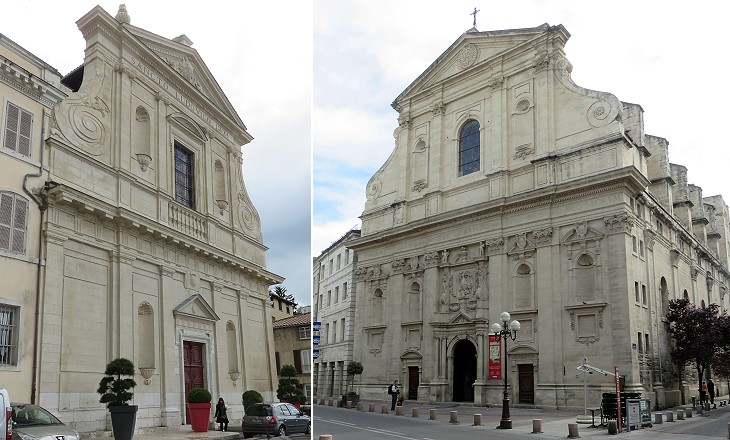 Jesuit churches at Vienne (left) and Avignon (right) in France

The imposing façade of il Gesù was designed by il Vignola, but it was modified by Giacomo Della Porta at the request of Cardinal Alessandro Farnese, grandson of Pope Paul III, who financed the construction of the church, which for this reason is also known as Tempio Farnesiano. The façade and more in general the layout of the building became a pattern which was followed in many other Jesuit churches in Rome (e.g. S. Ignazio) and abroad. You may wish to see the façade in a 1588 Guide to Rome; the illustration is not entirely consistent with the actual building. The image used as background for this page shows a relief of the façade which depicts the symbol of the Jesuit Order (IHS, an acronym for Jesus, may mean also Iesus Hominum Salvator, i.e. Jesus Saviour of Men). 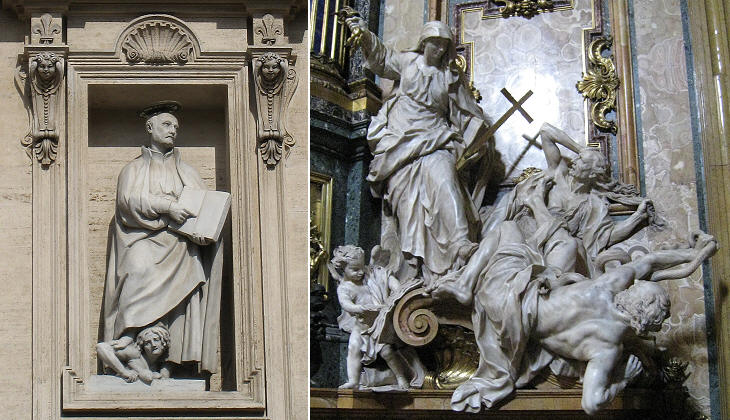 In his youth St. Ignatius was a Spanish knight and the order he founded was influenced by his military background; Compagnia di Gesù, the Italian name of the Order, can also indicate a body of soldiers and the saint himself defined the members of the order as Soldiers of God. The Jesuits aimed at defending and propagating Roman Catholicism; so they were very active as missionaries in America and Asia (e.g. Father Matteo Ricci) and they were strong adversaries of Protestantism in Europe.
This introduction explains why il Gesù is not decorated with statues portraying martyrs or saints having a vision, but rather with dramatic scenes showing the triumph of True Religion over Heresy. 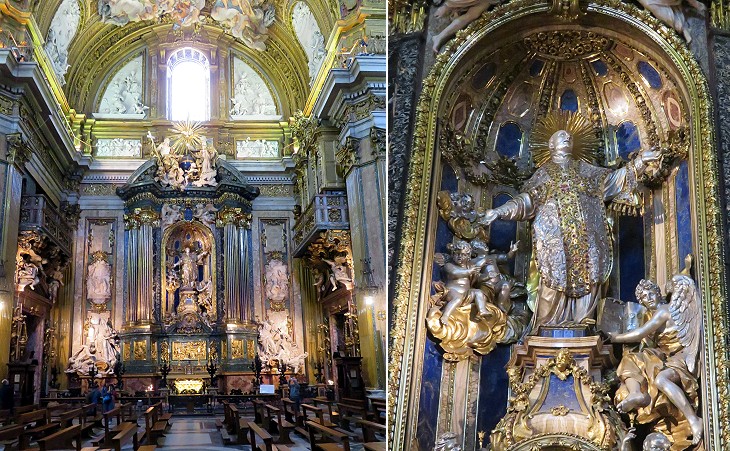 (left) Altar of St. Ignatius; (right) statue of the saint

1659. January the 15th. Wee went to the Church of the Jesuits, which is called the grand Geesu, which is a very large and stately Church And adorned with a multitude of Rich Chappels and Altars about. (..) Wee came here at the same tyme that A Jew, his Wife, and Children were baptized by a Jesuite, where was present many great Persons, and among the Rest Don Augustine (who is the Pope's (Alexander VII) Nephew and made a Prince), with his wife, who was God mother to one of the Children. She had a Coach heere, which for Richnesse might be wel admired by all that sees it.
Francis Mortoft's Journal of his travels in France and Italy
The façade of il Gesù reflects the initial austere Jesuit approach to art, whereas the rich decoration of the interior shows how this approach evolved in the second half of the XVIIth century and how the building became the Church of the Rich. In 1695-1699 Andrea Pozzo, a Jesuit Brother who had just painted the ceiling of S. Ignazio, designed an altar dedicated to St. Ignatius by using the most precious stones, including lapis lazuli; the saint was portrayed in a gigantic solid silver statue (it was melted down in 1798 to pay war compensation to France). 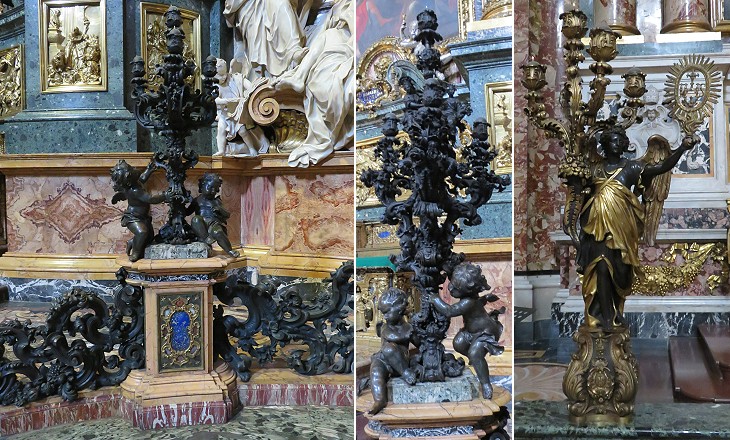 Andrea Pozzo designed the bronze railing which surrounds the Altar of St. Ignatius. Ten sculptors were involved in making the casts of its many components and the melting process was supervised by Carlo Spagna, a well known silversmith. In the XVIIth century the decoration of a chapel or an altar or even just a funerary monument was the result of teamwork, because it required many different crafts. You may wish to see Cappella Cornaro at S. Maria della Vittoria, the most remarkable example of such teamwork. 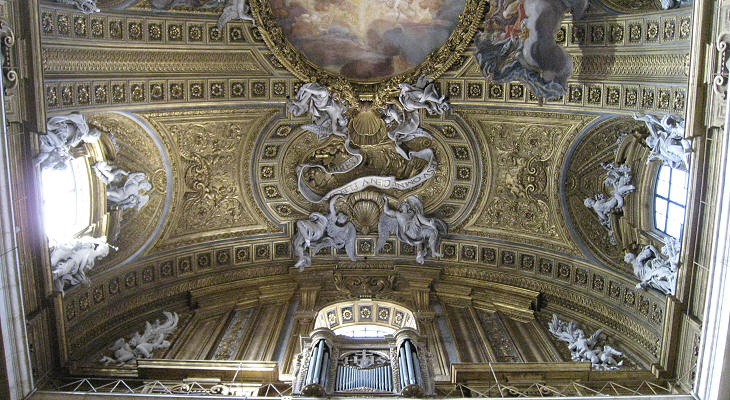 Decoration of the ceiling by Antonio Raggi and Leonardo Retti. The angels hold the inscription: "In Nomine Iesu Omne Genu Flectatur Coelestium, Terrestrium et Infernorum" (In the Name of Jesus let every knee bow, of those that are in heaven, on earth, and under the earth - from St Paul's letter to the Philippians). The full name of the church is Chiesa del Santissimo Nome di Gesù.

For Bernini (..) painting was a sculptural art projected on to a surface; and transitions from sculpture into painting and vice versa were therefore equally justified. (..) His new ideas were absorbed by Giovan Battista Gaulli, called Baciccio, an artist of greater calibre. (..) He came from Genoa to Rome in about 1660 and was soon taken up by Bernini and deeply influenced by his ideas. His greatest work, the frescoes in the Gesù, must be regarded as the fullest exposition of Bernini's revolutionary conception of painting. Here the principle of combining fresco and painted stucco and of superimposing painted parts on the architecture has been given its monumental form.
Rudolf Wittkower - Art and Architecture in Italy 1600-1750 - Penguin Books 1958
The most striking feature of il Gesù is its ceiling, not only the central illusionistic painting (1679) by Giovanni Battista Gaulli known as il Baciccio, but also the gold and white stucco decoration by Antonio Raggi and Leonardo Retti; the three all worked with Gian Lorenzo Bernini. You may wish to see the decoration of the dome of S. Andrea al Quirinale, another church designed by Bernini by Raggi and others. 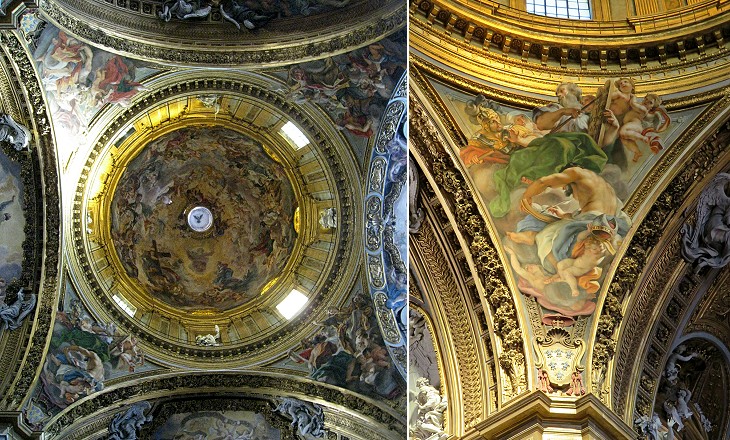 The church is gorgeous; late Renaissance, of great proportions, and full, like so many others, but in a pre-eminent degree, of seventeenth and eighteenth century Romanism. (..) There is a vast dome, filled with a florid concave fresco of tumbling foreshortened angels, and all over the ceilings and cornices a wonderful outlay of dusky gildings and mouldings. Read more of Henry James's account of his visit to il Gesù in 1873.
The exterior of the dome can be seen in a page showing the Domes of Rome. 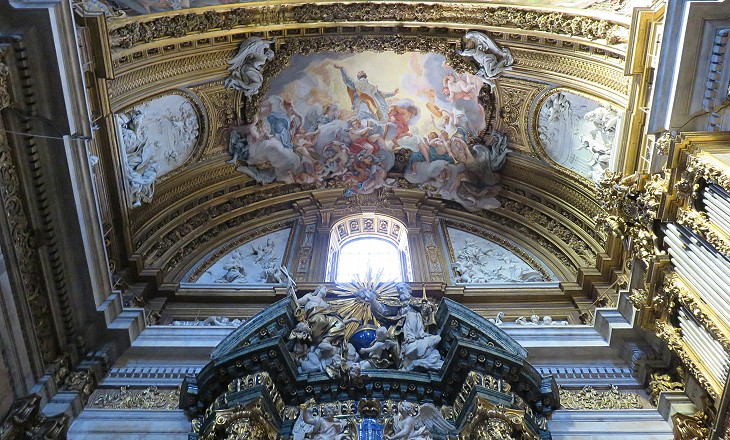 Ceiling above the Altar of St. Ignatius by il Baciccio

It is a tumult of virtuosity in painting, in sculpture, in architecture. Statues sprawl into frescoed figures at points in the roof, and frescoed figures emerge in marble at others. Marvels of riches are lavished upon chapels and altars, which again are so burdened with bronze gilded or silver plated, and precious stones wrought and unwrought, that the soul, or if not the soul the taste, shrinks dismayed from them. (..) Everything is the expression of devoted faith in the forms that the art of the time offered. Read more of William Dean Howells' account of his visit to il Gesù in 1908. 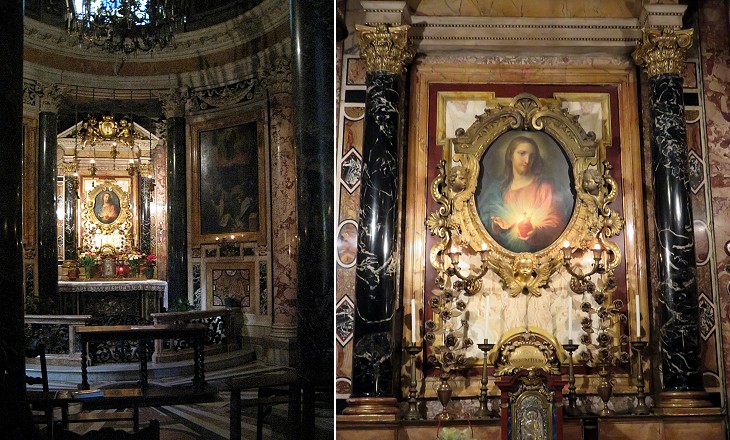 A side chapel of the transept houses a small painting (on copper) by Pompeo Batoni, which has become one of the most famous holy images. At the time it stirred a controversy because the devotion to the Sacred Heart of Jesus was regarded by the Jansenists as a form of idolatry. In 1794 Pope Pius VI officially approved the devotion to the Sacred Heart and issued indulgences to those who practiced it. Batoni's portrayal of Jesus bearing the Sacred Heart exerted broad influence and became virtually canonical during the second half of the XIXth century, in part because of its enormous dissemination in mass-produced print media. 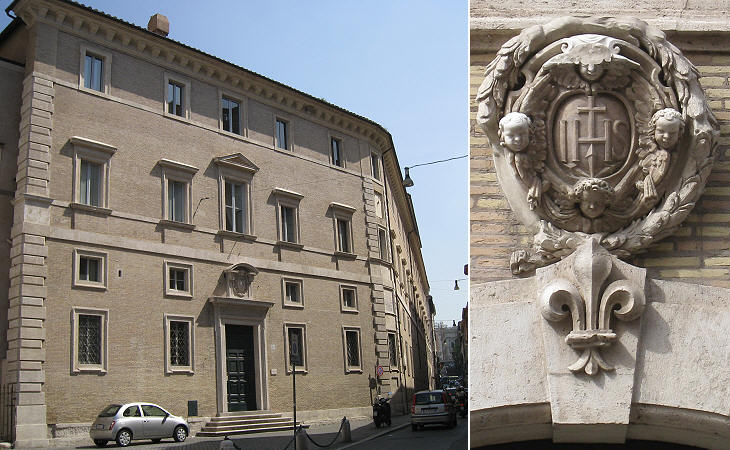 (left) Side in Piazza del Gesù; (right) decoration of a rear entrance with the Farnese fleur-de-lis

Between 1599 and 1623 another Farnese cardinal, Odoardo, nephew of Alessandro, provided the Jesuits with appropriate headquarters (Casa Professa); the building designed by Girolamo Rainaldi is very wide, but probably it would have gained by being taller; it must be said that at the time the opposite palace (Palazzo Petroni) was not yet built. In 1925 the Jesuits acquired the property of Villa Barberini which today houses their headquarters. 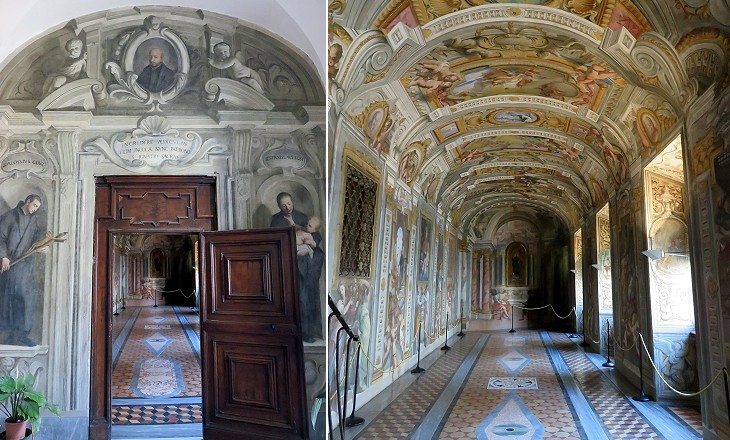 I came to the Jesuits Church and house called the Casa professa. The Church is neat and capacious, the Chappels well painted, and the ornaments in the Vestry. very rich. (..) In the house of these Fathers I saw the Chamber of S. Ignatius , now turned into a Chappel, and a fair Library.
Richard Lassels' The Voyage of Italy, or a Compleat Journey through Italy in ca 1668
Casa Professa incorporated the house where St. Ignatius spent his last years (1544-1556). It was visited by many pilgrims (and Jesuit novices) who wanted to see the modest furniture of the rooms and a few relics of the presence of St. Ignatius, including a pair of his shoes.
In ca 1680 Andrea Pozzo was asked to decorate the short gallery which gave access to the house. 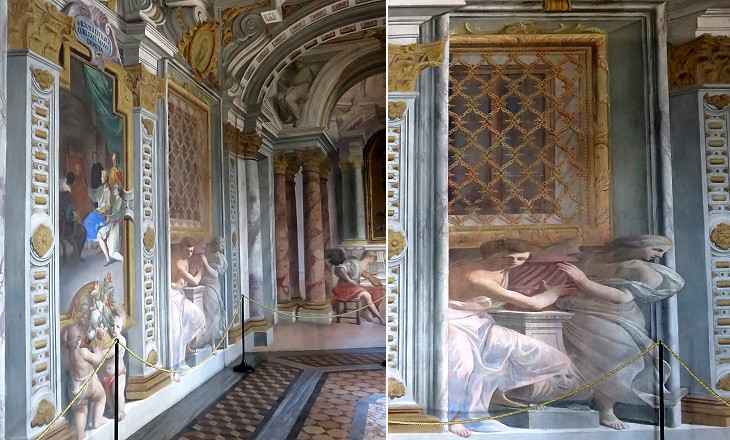 (left) The left wall seen from the optimal viewpoint determined by Pozzo; (right) frontal view of a detail

The decoration of the gallery was the first occasion Pozzo had to put his studies about perspective laws into practice. He managed to make the gallery seem wider and larger and he corrected some of its shortcomings (e.g. the wall at the end which is askew).
The Jesuits were so pleased with Pozzo's work that they eventually commissioned him the decoration of S. Ignazio and other churches, including Jesuitenkirchen in Vienna. 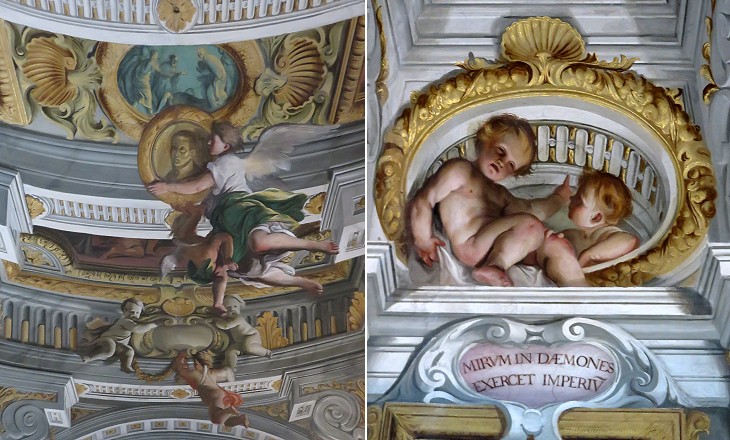 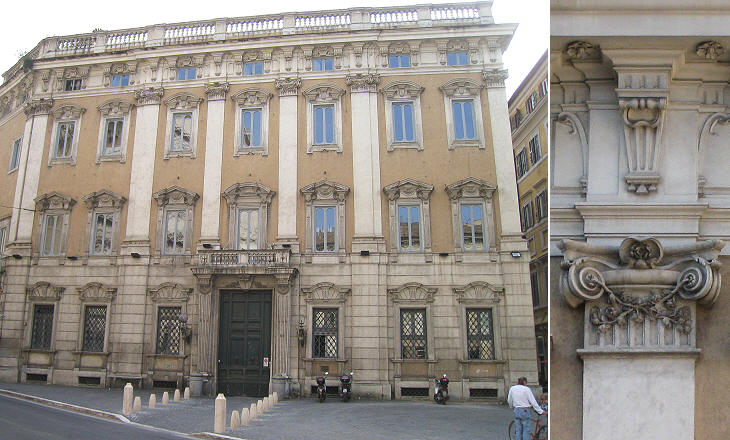 (left) Main façade; (right) detail of a capital decorated with roses, the heraldic symbol of the Petroni

Palazzo Petroni is a minor work by Ferdinando Fuga, who was the preferred architect of Popes Clement XII and Benedict XIV; it brings to mind Palazzo Odescalchi, but some details such as the portal are unusual. Roses were the heraldic symbol of the Petroni and Fuga found a way to place many of them in the decoration of the building. 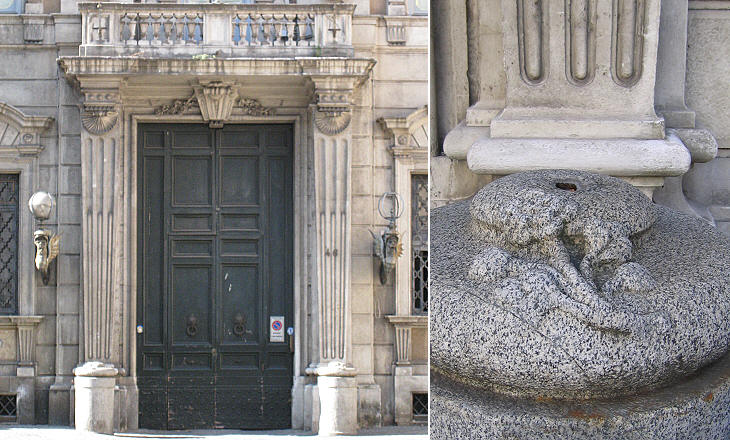 (left) Portal; (right) the rose of the Petroni on one of the two small columns at the sides of the entrance

The palace was bought by the Bolognetti, Princes of Vicovaro and the founders of Gesù e Maria, shortly after its redesign by Fuga. In 1775 the last heir of the Bolognetti married a Cenci.
The building housed the headquarters of Democrazia Cristiana, the main Italian political party from 1946 to 1992, and therefore Piazza del Gesù was used as a synonym for referring to the party; almost every day Italians were told what happened in Palazzo Cenci Bolognetti. 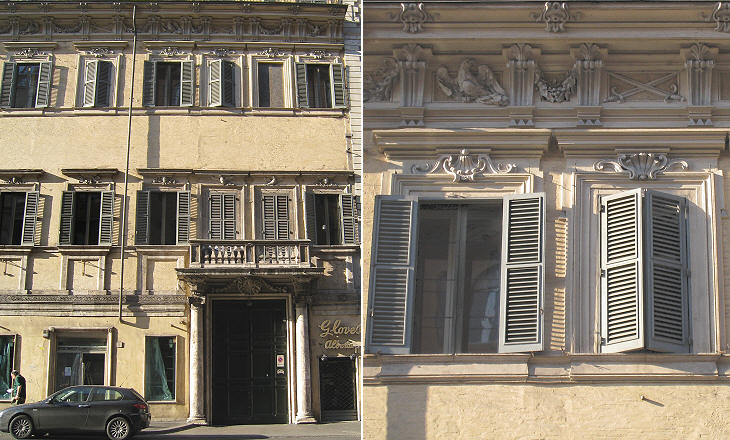 (left) Main entrance; (right) detail of the windows and of the cornice

In the 1880s the narrow street linking Piazza del Gesù with S. Andrea della Valle was enlarged by pulling down the buildings on its northern side. Those on its southern side were partly modified to suit the taste of the period. Palazzo Celsi Viscardi retained its previous appearance: it was designed in 1678 by Giovanni Antonio De Rossi for the Celsi, but the Viscardi, who acquired the palace in the early XVIIIth century, decorated it with their heraldic symbols (eagles and swords).