The Domes of Rome
(the domes of S. Carlo al Corso and of S. Pietro at sunset)

The skyline of Rome is characterized by a large number of domes. The Ancient Romans made use of vaults especially for covering the halls of their baths. The vault of the calidarium (hot room) of Terme di Caracalla was supported by four gigantic pillars: it was studied in depth in the XVth century by Early Renaissance architects as it provided a model for vaults (of churches) to be built at the crossing of the nave with the transept. Terme di Diocleziano had several round buildings covered by vaults, one of which still exists (S. Bernardo alle Terme). Tempio di Ercole Callaico was another ancient vault which was studied in the XVth century.

The most celebrated Roman dome was however the Pantheon, the design of which was echoed in many Renaissance buildings, in particular by Antonio Palladio. The study and the actual building of various forms of domes became quite intense in the first half of the XVth century in northern Italy and in Tuscany, but not in Rome, where the authority of the Pope was challenged by the local factions. San Teodoro, the first dome built in Rome after many centuries, was designed in 1453 by Bernardo Rossellino. 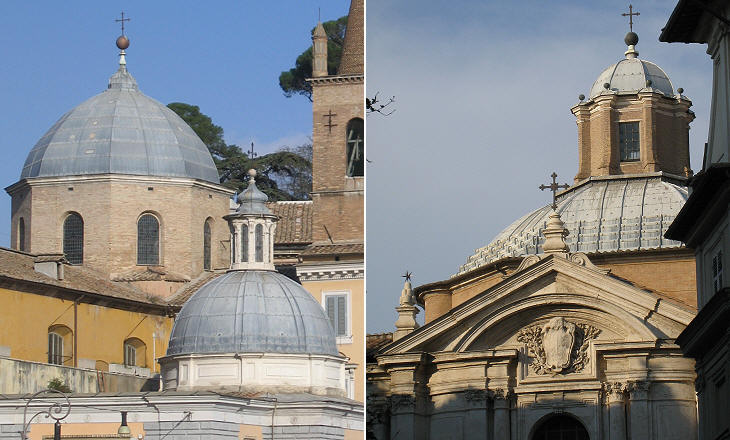 Sixtus IV was the first pope who embarked on a large program of public works. Santa Maria del Popolo was built during his pontificate by the association of the Lombards in Rome and its dome, most likely designed by Andrea Bregno, takes after models of Lombardy (the picture shows also the dome of Cappella Cybo built by Carlo Fontana in 1687).
Santa Maria della Pace was initiated under Sixtus IV, but the dome was built in the XVIth century between 1520 and 1525 and it shows the three main elements of a dome: the drum, the vault and the lantern. At this time Rome already had one of the finest domes, a model for all the architects, a round chapel built by Donato Bramante in 1502 in San Pietro in Montorio. 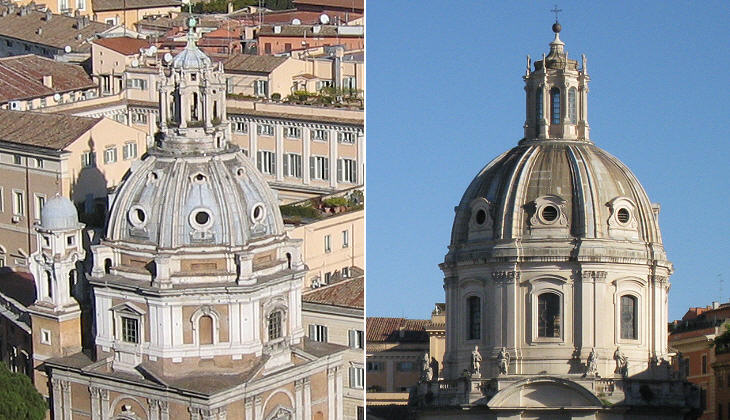 The building of S. Maria di Loreto took place over a 60 year span. It was originally designed by Donato Bramante in 1507, but very little was built for many years. In 1534 Antonio da Sangallo the Younger completed the lower, cube-shaped part, which was covered by a temporary roof. The dome was designed in 1573 by Jacopo del Duca, a scholar of Michelangelo, who designed also the little bell tower. The elaborated lantern inspired many Baroque architects including Francesco Borromini.
In the XVIIIth century a church, SS. Nome di Maria, was built next to S. Maria di Loreto and its architect, Antoine Dérizet, designed a dome very similar to that of S. Maria di Loreto, thus creating another couple of domes. Other couples existing at the time were: Santa Maria dei Miracoli and Santa Maria in Montesanto (which are shown in the image used as background for this page); the two chapels added to Santa Maria Maggiore; Sant'Andrea della Valle and San Carlo ai Catinari. 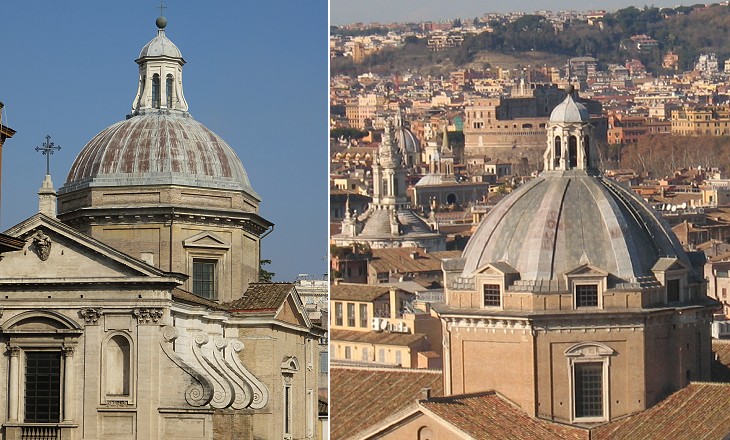 The greatest achievement of Giacomo della Porta is with no doubt the completion of the dome of S. Pietro in 1590. Prior to that he designed the domes of Madonna dei Monti and of Chiesa del Gesù. Both churches have a Latin cross shape and the domes can only be seen by moving to the side of the church or from higher ground (many pictures in this page were taken from the top terrace of Monumento a Vittorio Emanuele II). 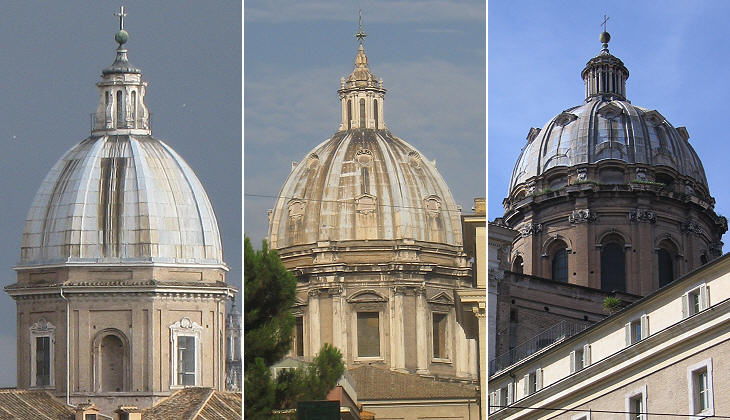 In the early XVIIth century the vertical development of the domes was increased in an attempt to improve their visibility. The dome of S. Giovanni dei Fiorentini, by Carlo Maderno (1614) ended up by being called Confetto succhiato (sucked comfit) because of its shape. Carlo Maderno also designed the second largest dome of modern Rome, that of S. Andrea della Valle (1622). The size and the shape of this dome are very similar to that of S. Carlo ai Catinari designed in 1620 by the monk Rosato Rosati. Because the two domes are not so far away, they form a couple (and add to the feminine side of the Roman skyline). 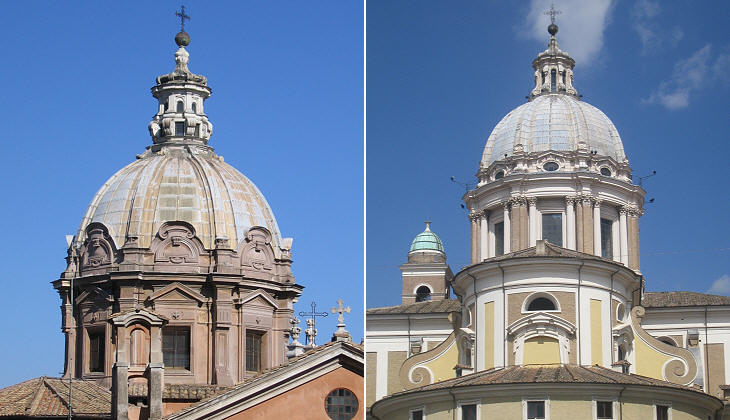 The only dome designed by Gian Lorenzo Bernini in Rome was the elliptical dome of Sant'Andrea al Quirinale. The domes designed by Francesco Borromini in San Carlo alle Quattro Fontane, Sant'Ivo alla Sapienza and Sant'Andrea delle Fratte all departed from the generally accepted dome structure. Pietro da Cortona who was both a painter and an architect designed two more traditional domes: SS. Luca e Martina in 1644 and S. Carlo al Corso in 1668. The two lanterns in particular are very similar. 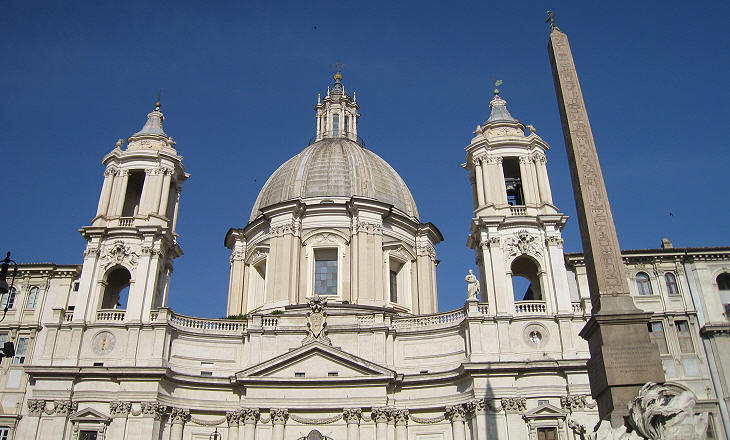 Francesco Borromini designed the dome of S. Agnese in Agone, but Carlo Rainaldi who took over from him in 1657 reduced by one fifth the height of the vault. Notwithstanding this the vertical drive of the dome is such that S. Agnese with its two high bell towers can be considered the final stage of the Baroque model of church. 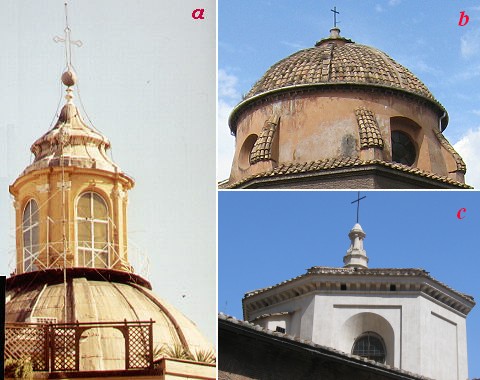