S. Maria a Trevi
(Vasi at work in the Grand View of Rome) 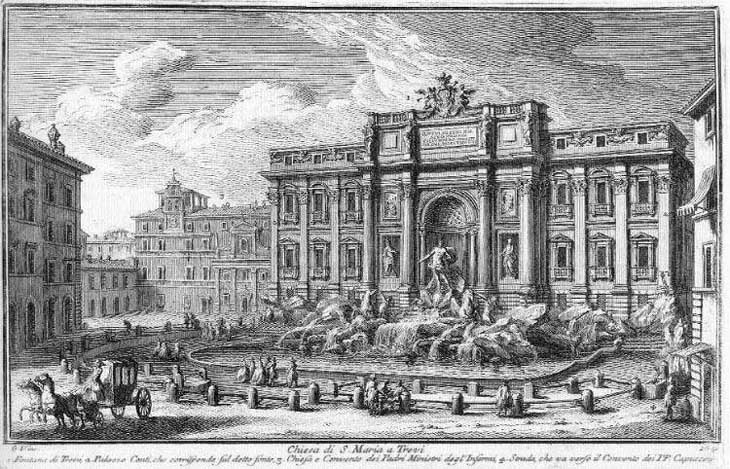 S. Maria a Trevi is the "official" subject of the plate, but its real focus is on Fontana di Trevi which was not yet fully completed in 1756 when Giuseppe Vasi engraved this etching. The marble statues at the centre of the fountain were made in 1759-762, but Vasi had an idea of their appearance because they were based on 1738 gypsum models by Giovanni Battista Maini.
The view is taken from the green dot in the small 1748 map here below (more or less from the steps of SS. Vincenzo e Anastasio). In the description below the plate Vasi made reference to: 1) Fontana di Trevi; 2) Palazzo Conti; 3) S. Maria a Trevi; 4) Street leading to Convento dei Padri Cappuccini. The small map shows also 5) Oratorio del SS. Sacramento; 6) S. Maria in Via; 7) SS. Vincenzo e Anastasio. 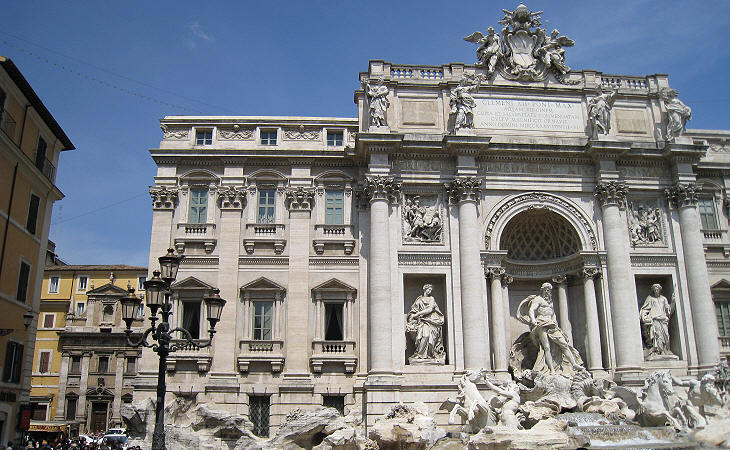 It is not possible to see S. Maria a Trevi from the point chosen by Vasi for his view and it was so in 1756 too. In order to see the church it is necessary to move to a more central position. Apart from some modifications to buildings on the eastern side of the square, no major changes have occurred and Fontana di Trevi continues to be a surprise for those who reach it by walking through a maze of narrow streets.

A series of projects to enlarge the square and open a large street opposite the fountain were developed in the 1810s, 1870s and 1920s, but they were never implemented. 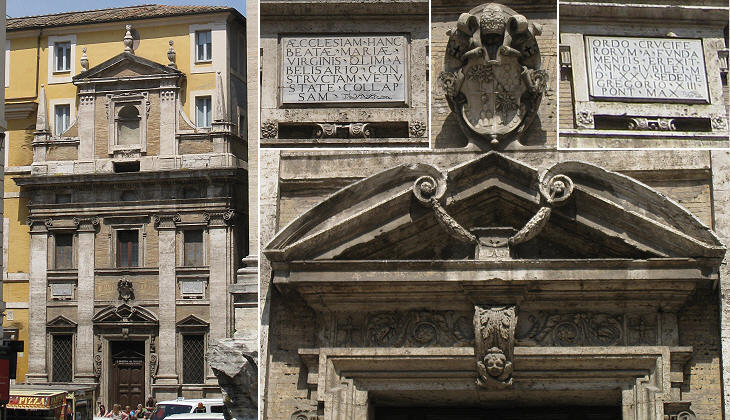 (left) S. Maria a Trevi; (right) detail of the portal and of the inscriptions with the coat of arms of Pope Alexander VII which was added in 1667

S. Maria a Trevi (or in Trivio) is one of the oldest churches of Rome; according to tradition it was founded by Belisarius, the Byzantine general who conquered Rome twice in the VIth century. According to an XIth century inscription on the side wall of the church he did so to expiate his wrongdoings.

Inscription on the side wall

The church was known as S. Maria in Fornica because it was built by incorporating some arches (Lat. fornices) of an ancient Roman aqueduct. It must have been at a lower level than the current church which was built for the 1575 Jubilee Year by Jacopo del Duca during the pontificate of Pope Gregory XIII. It became known as S. Maria a Trevi because it stood at a trivio, a junction where three streets met: one coming from Piazza di Trevi, the fountain square, one leading to Via del Tritone (near Oratorio del SS. Sacramento) and one leading towards Piazza Colonna. Eventually the name of the junction was used to indicate the whole neighbourhood (Rione Trevi). 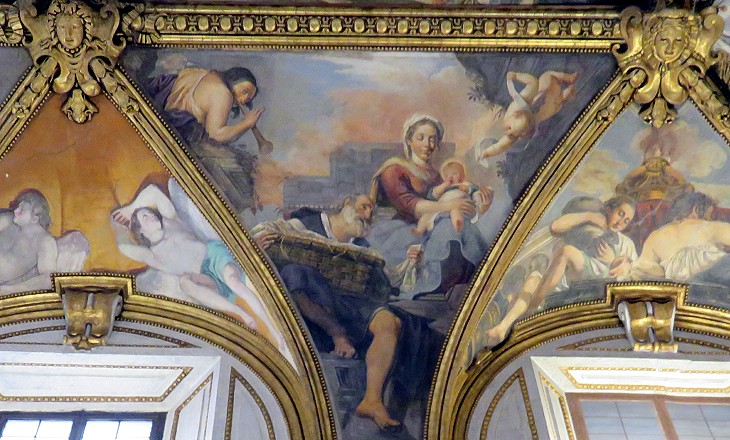 The church belonged to the Betlemitani or Crociferi (Cross-bearers), a military order founded at Betlehem in the XIIth century to care for the sick. The Order was dissolved in 1656 by Pope Alexander VII who assigned the church to Ministri degli Infermi, an order founded by St. Camillus de Lellis in 1586.The new owners of the church promoted its decoration with a fine ceiling which you can see in its entirety in a page covering this topic. In the late XVth century the Piazza di Trevi became the terminal point of Acqua Vergine, an ancient Roman aqueduct which was built by Marcus Vipsanius Agrippa (Emperor Augustus' son-in-law) to supply water to the baths named after him. The aqueduct lay underground for most of its length: it came to the surface near Collegio del Nazzareno where some of its arches are still visible. It was restored by Pope Nicholas V in 1453 and again in the following century. It ended with a large plain basin designed by Gian Lorenzo Bernini for Pope Urban VIII.

The basin of Fontana di Trevi

Several popes considered the idea of building a monumental fountain similar to those of Acqua Felice and Acqua Paola in the existing basin, but little was done until Cardinal Michelangelo Conti was elected Pope Innocent XIII in 1721. His family owned the palace behind the basin and the construction of a fountain was regarded as an addition to its importance. The Conti were Dukes of Poli and the palace is usually referred to as Palazzo Poli. Pope Innocent XIII passed away after just two years.
Pope Benedict XIII, his successor, wanted to dedicate the fountain to the Virgin Mary, but because of lack of resources the project was shelved until 1730 when it was resumed by Pope Clement XII whose gigantic coat of arms by Paolo Benaglia is placed at the top of the fountain. 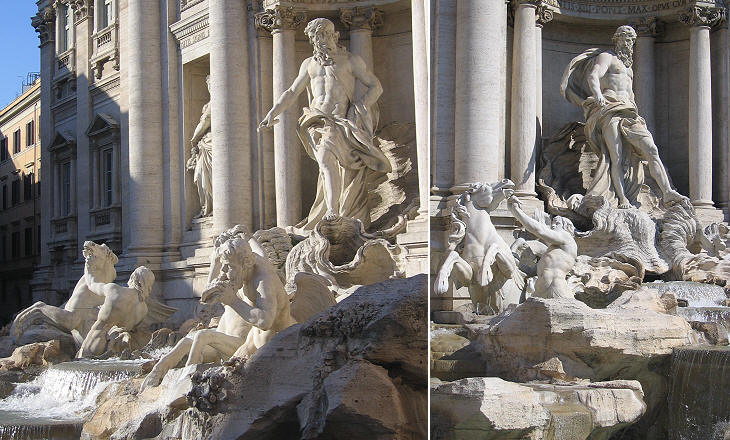 Pope Clement XII was personally involved in choosing the design of the fountain and its decoration; it is interesting to note that the project by Nicola Salvi that he endorsed is totally free of religious connotations; the main statue portrays Ocean, but only those very familiar with traditional iconography can tell that it does not portray Neptune, the pagan God of Sea (the former does not hold a trident, while the latter is usually, but not always, portrayed with it). The Pope reintroduced the game of lotto to finance the construction of the fountain. 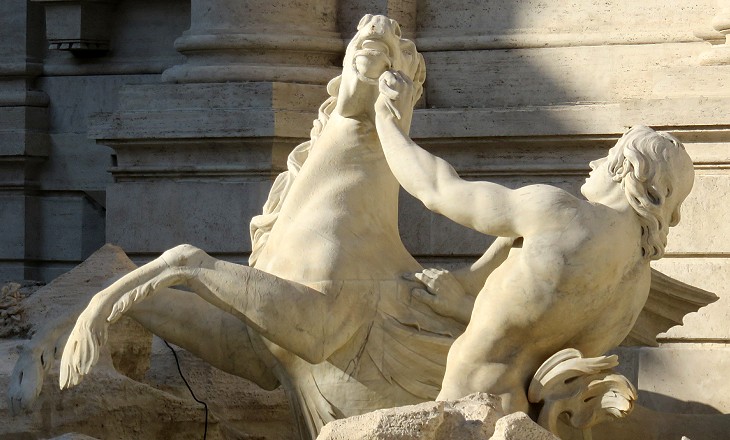 The overall design of the fountain resembles that of a Roman triumphal arch, in particular of Arco di Costantino, the restoration of which was promoted by Pope Clement XII. The reference to ancient Rome was emphasized by the two tritons acting as horse tamers. They are evocative of Castor and Pollux, the twin demigods who protected the Romans. Castor in particular was known as a horse tamer: Castor, skill'd to guide the rapid horse - Francis Fawkes, The Argonautics of Apollonius Rhodius (1780) - Book I 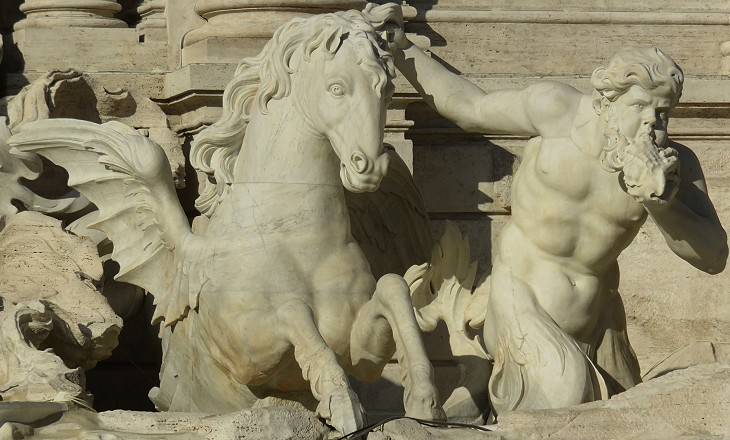 Triton blowing into a conch shell by Pietro Bracci, which brings to mind Fontana del Tritone by Gian Lorenzo Bernini (another image of this triton can be seen in that used as background for this page)

Nicola Salvi had to face a major difficulty when he designed the project for the fountain. The water of Acqua Vergine ran just above the ground level. In 1627 at Piazza di Spagna Pietro Bernini, the father of Gian Lorenzo, placed Fontana della Barcaccia, which was supplied by Acqua Vergine, in the lowest possible position. Salvi greatly emphasized the decoration of the lower part of the fountain in order to attract the attention of the viewer to that. The arch does not house water spouts. 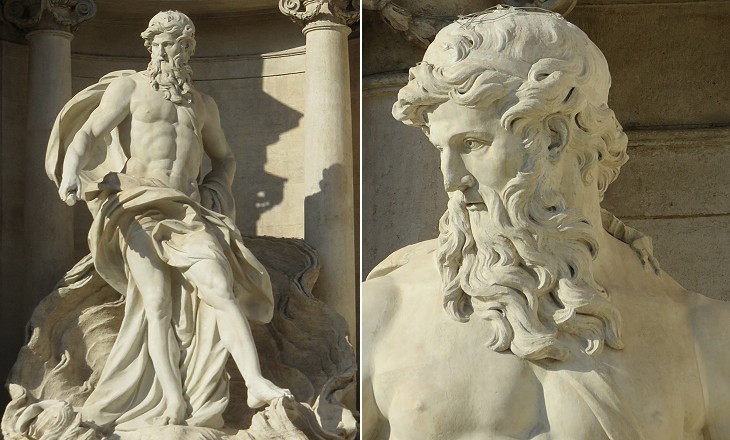 Pietro Bracci was the most skilled sculptor of his time, but he did not have the charisma of Michelangelo or Bernini. He generally worked on statues for funerary monuments which were designed by someone else (see his Monument to Cardinal Renato Imperiali). Ocean stands on a precarious balance as if he were dancing a minuet. His torso shows the familiarity Bracci had with ancient sculptures, but the head lacks energy. 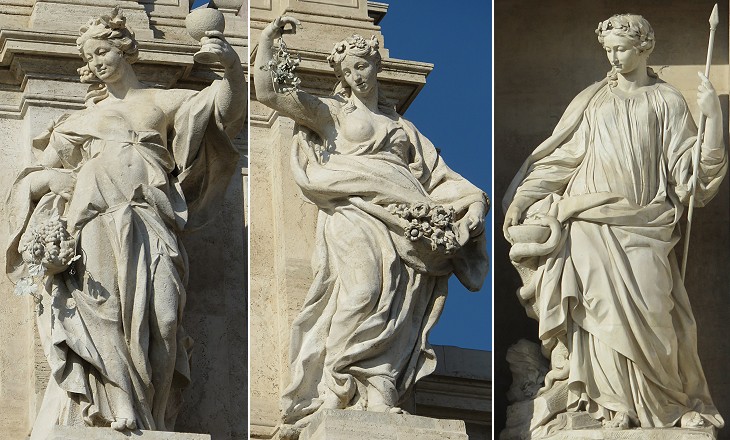 The four statues at the top of the fountain were completed by 1735. At that time Pope Clement XII was almost entirely blind and he did not notice that the sculptors had portrayed women in déshabillé, something which was very much in line with the rather frivolous XVIIIth century society, but not with the traditional view of the Roman Church on nudity.
Pope Benedict XIV and Pope Clement XIII, his successors, made sure that the statues which were added during their pontificates portrayed fully clothed women. 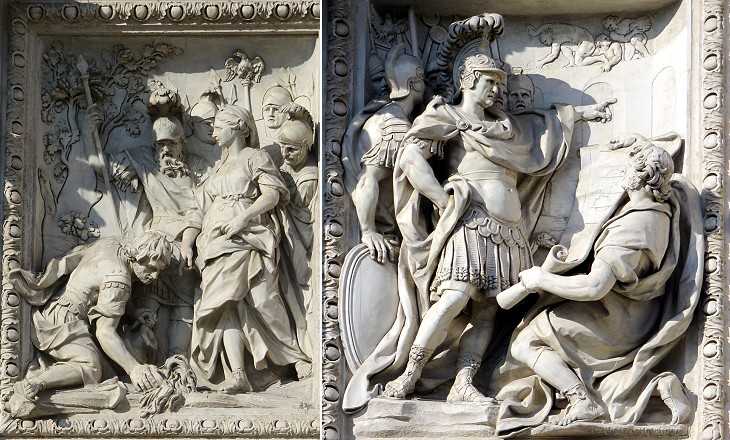 (left) The Discovery of the Spring by Andrea Bergondi; (right) Agrippa Orders the Construction of the Aqueduct by Giovan Battista Grossi

One of the two reliefs portrays a young woman indicating the spring to thirsty soldiers: it explains the traditional name (Aqua Virgo/Acqua Vergine) given to the water carried by the aqueduct.
Actually Acqua Vergine was not a major Roman aqueduct because its source was not very far from the city and its construction did not require the imposing arches which are shown in the other relief (you may wish to see a 1911 map of the environs of Rome showing the spring - it opens in another window).
In 1999 an ancient cistern where the aqueduct water was stored was found behind SS. Vincenzo e Anastasio. The formal inauguration of Fontana di Trevi took place in 1762. The influence of Bernini's Fontana dei Quattro Fiumi with its blend of nature and architecture is evident in the design and decoration of the rocks.
Pope Benedict XIV rewarded in an unusual way Monsignor Giancostanzo Caracciolo di Santobono who was in charge of the completion of the fountain: he allowed him to have his coat of arms placed among the rocks on the right side of the fountain.

Fifty swallowed palmfuls of the Fountain of Trevi could n't make us more ardently sure that we shall at any cost come back. This is the closing sentence of Henry James' account of his 1873 visit to Rome (you may wish to read some excerpts from that account).
Today tossing a coin into the fountain has replaced drinking its water. It is not allowed to imitate Anita Ekberg and Marcello Mastroianni in Fellini's La Dolce Vita (it opens in another window).

S. Maria in Via 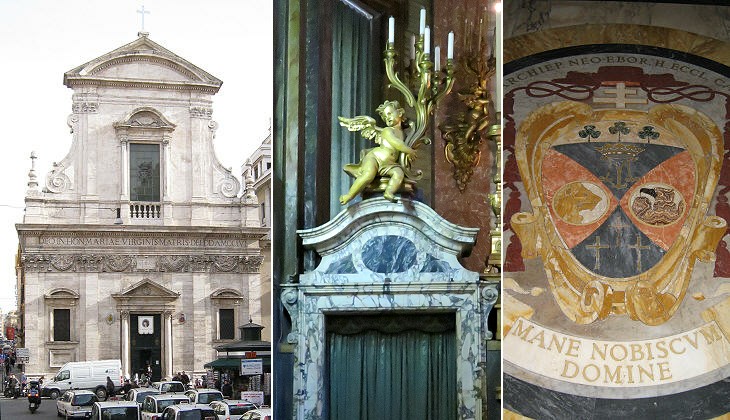 (left) S. Maria in Via; (centre) detail of the altar; (right) coat of arms of Cardinal Patrick Joseph Hayes, Archbishop of New York in 1919-938

The church is very old and most likely owes its name to the fact that it was near the urban section of ancient Via Flaminia which later on was called Via del Corso. The current building is the result of a series of additions and modifications which started in 1576 and ended more than a century later with a new façade designed by Carlo Rainaldi. The interior was poorly modified in the XIXth century, leaving only a few elements of the original decoration. American visitors may be interested in observing the complex coat of arms of Cardinal Patrick Joseph Hayes: he was of very humble origin and he probably exceeded in the use of symbols when he designed his own coat of arms.

(left) Banner with the sacred image worshipped in the church; (right) relief on the wall of the adjoining building

The fame of the church is associated with an event which occurred in 1256 when a nearby well overflowed; the water carried with it a sacred image. It was called Madonna del Pozzo (well) and it was placed in a chapel of S. Maria in Via. The event is celebrated in a relief placed on an adjoining small palace which was bequeathed to Confraternita del SS. Sacramento, a brotherhood, by Mons. Giovanni Battista Canobi, secretary to Pope Gregory XIII. The revenue from the building had to be used for pro maritandis puellis, i.e. for providing poor girls with a dowry so that they could marry. 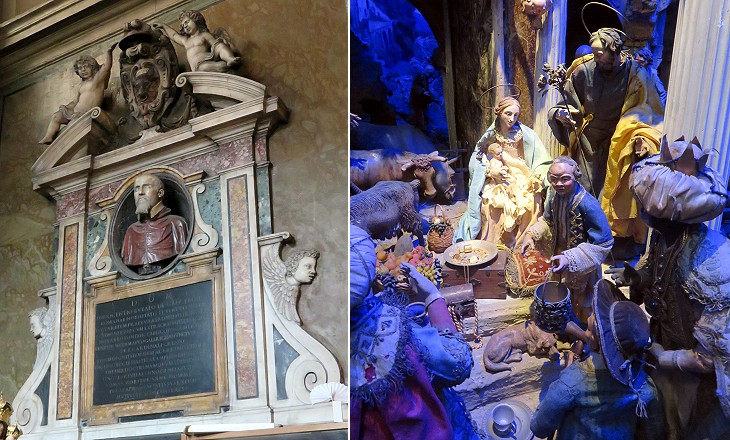 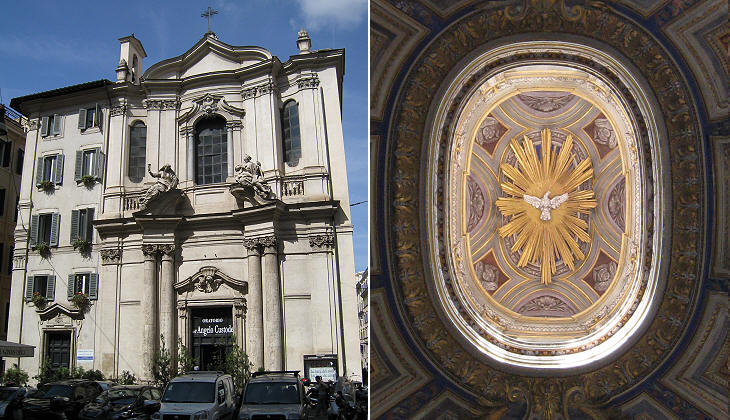 Confraternita del SS. Sacramento received so many donations that in 1727 its members decided to build a small church for their ceremonies. The façade was designed by Domenico Gregorini between two identical small buildings which in addition to facilities for the brotherhood, had some apartments for rent. The interior of the church was redesigned in the XIXth century.
In 1883-889 the enlargement of Via del Tritone, the street linking Piazza Colonna with Piazza Barberini, led to pulling down the building to the right of the church.