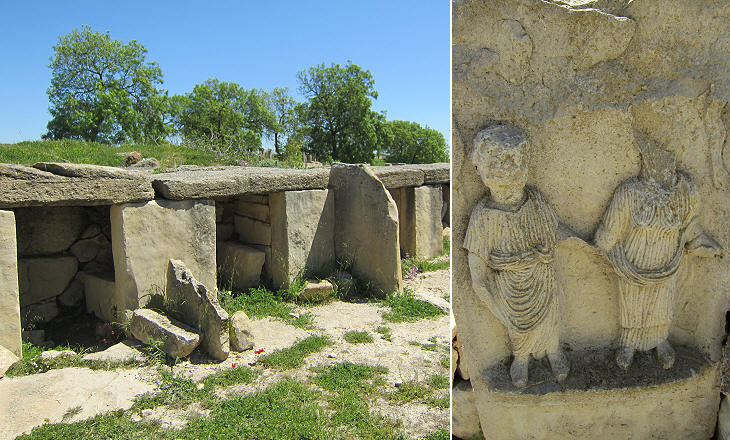 Roman law did not allow the construction of tombs within the pomerium, the official boundary of towns. Apparently the rule seems to deal with hygienic worries, but because the usual mode of disposing of corpses was cremation, it was mainly meant to prevent the richest citizens from occupying public spaces with their funerary monuments. Through this law the Roman Republic showed its opposition to forms of "cult of personality" and even the tombs of the emperors were built outside the pomerium.
The necropolis of Mactaris was therefore located at the very end of the town and it included rudimentary family chapels built by using large stones and later tombs decorated with reliefs, including some where couples were portrayed hand-in-hand as in reliefs along Via Appia in Rome. 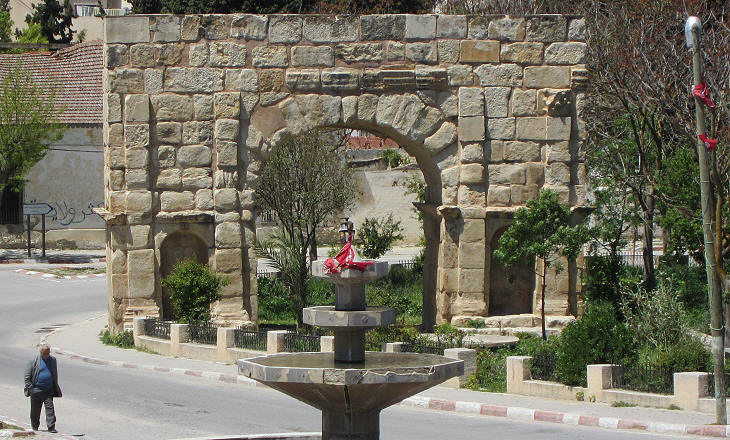 The northern end of Mactaris was marked by a triumphal arch, which has been very much reconstructed and today marks the entrance to the modern town. In a ravine to the right of the arch, archaeologists have found a small tophet, a Carthaginian cemetery for babies, which supports the opinion that some Carthaginians settled in Mactaris after the destruction of their city. 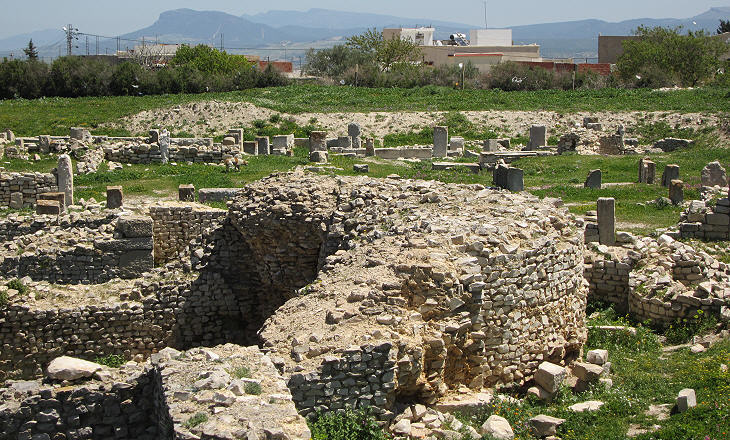 Temple of Hathor and behind it House of Venus

The Temple of Hathor was first erected in the Ist century BC and then reconstructed in the IInd century AD. It is known for having contained a very long Punic inscription. Hathor was an Egyptian goddess, but she was worshipped in other Mediterranean countries, e.g. on Cyprus and her cult was probably brought to Mactaris by the Carthaginians. The temple is evidence of the religious policy pursued by the Romans until the IIIrd century AD which in general refrained from forbidding traditional local cults, as long as they did not impact on the loyalty to Rome of their followers. 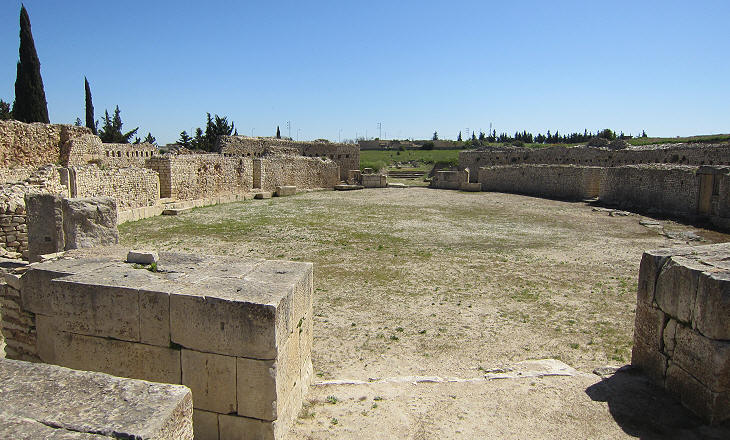 (Populus) duas tantum res anxius optat / panem et circenses "(The people of Rome) anxiously hope for just two things: bread and games" (Juvenal, Satire). What applied to Rome, applied to the remotest towns of its empire. At Mactaris the amphitheatre most likely housed venationes, the hunting of wild animals, from bears to ostriches. Mosaics portraying these animals have been found at many places as shown in a lively mosaic at the Museum of Bardo in Tunis. 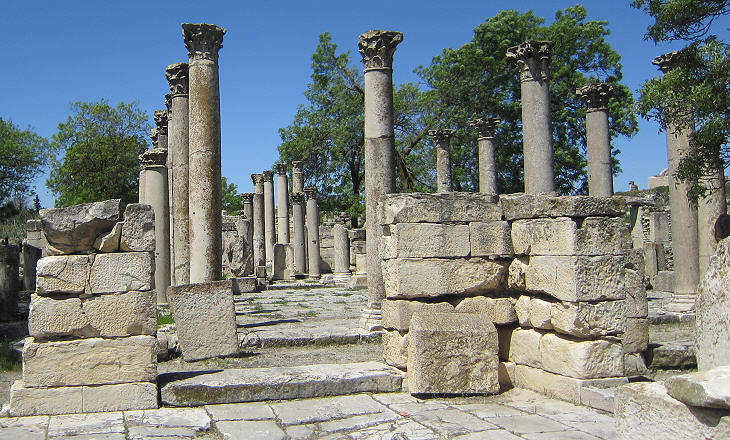 A complex of buildings at the south-western end of Mactaris is traditionally called Schola Juvenum after an inscription found there, which perhaps was related to other buildings. It has not been easy for archaeologists to reconstruct the complex because it was modified several times. According to the inscription it was built in 88 AD at the time of Emperor Domitian as a sort of club for the young men of Mactaris; apparently they had some role in policing the town. It might have been the seat of an important guild, similar to Schola del Traiano at Ostia. 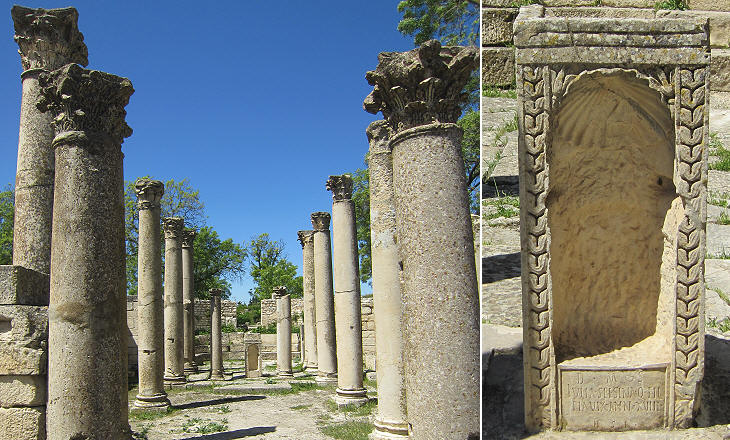 The complex was turned into a pagan basilica where funerary rites were performed and two gravestones from the nearby necropolis were utilized as altars. Eventually in the IVth century it was turned into a church. 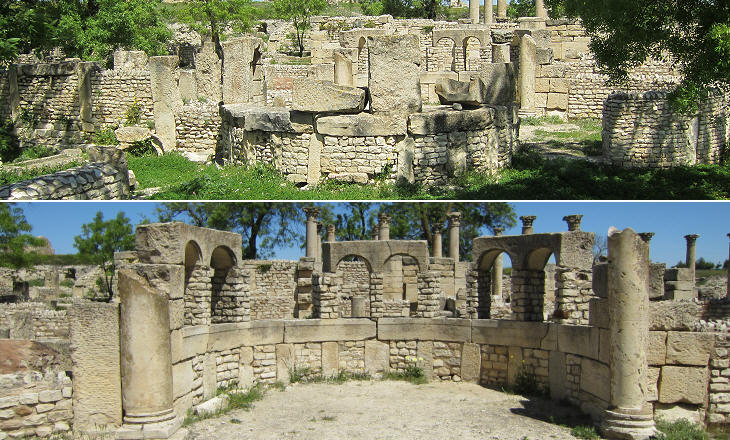 Buildings between Schola Juvenum and the necropolis

Archaeologists had the same difficulties experienced at Schola Juvenum in exactly determining the purpose of a series of buildings near the necropolis. They date from the time of Emperor Septimius Severus to the Vth century. Worthy of note is a building with four apses having some sort of "office windows" which is thought to have been a place where taxes were collected or supplies to the poor were distributed. Similar "office windows" have been found inside an ancient building at Sicca Veneria and their purpose is unexplained too. 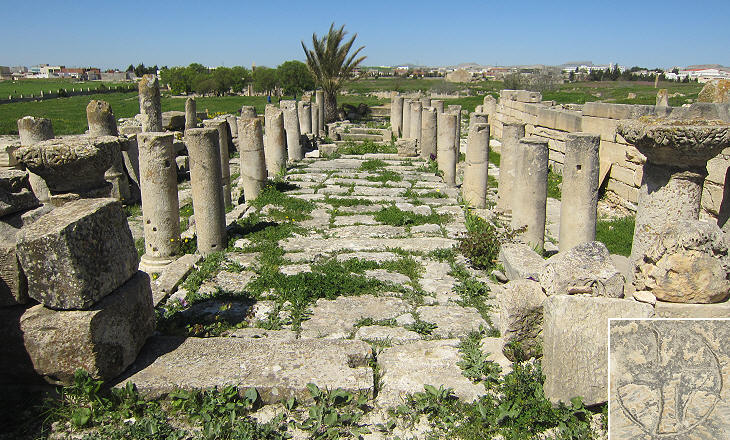 Basilica of Hildeguns; (inset) a cross carved on a stone

In 439 the Vandals invaded the Province of Africa. They were Arians and they took a strong stance against the remaining pagan communities. This was perhaps more true at Mactaris than at other locations because almost nothing is left of the temples which stood in the forum. Their columns were used to build a basilica with three extremely long and narrow aisles very near the Forum and probably above an existing building. It is named after an inscription found on a grave which supposedly is that of the founder. 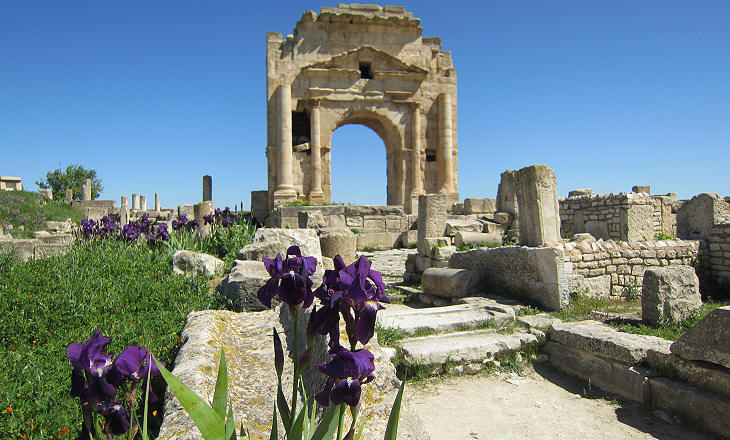 Fortified area outside the arch of the Forum

In the VIth century the Province of Africa was conquered by the Byzantines. Emperor Justinian promoted the construction of small fortresses by modifying the fora of many towns (as at Thugga, Musti and Sufetula). At that time the population of Mactaris must have been much smaller than in its heyday. 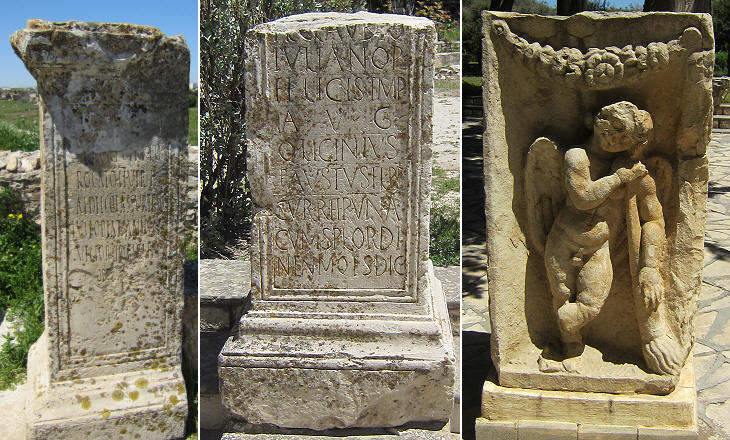 Inscriptions; (left) in the Forum dedicated to a local magistrate (aedile); (centre) in the Museum celebrating Emperor Julian and erected by Licinius Faustus the local "flamen"; (right) relief of a gravestone

The archaeological site of Mactaris has a small museum, mainly in the open air on the place of a basilica. It houses a rare inscription dedicated to Emperor Julian, which was not erased after his death, as occurred elsewhere because he was regarded as the last emperor who persecuted the Christians. The inscription indicates that at his time the office of flamen, a magistrate appointed to superintend the ceremonies in honour of the emperors, was still in place. 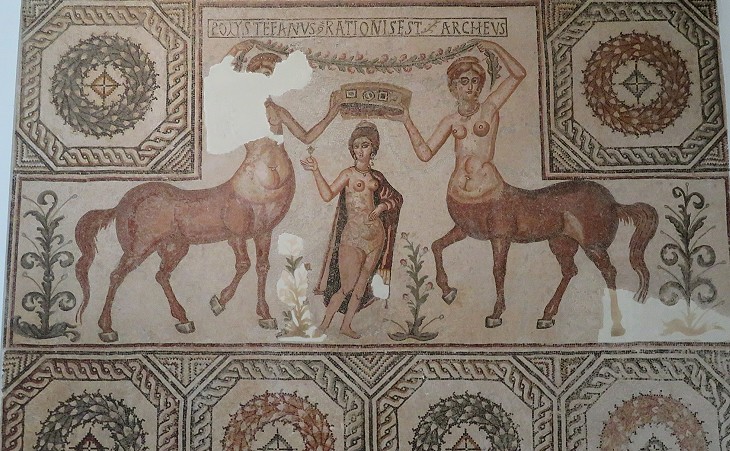 Museum of Bardo: early IVth century mosaic found at Elles near Mactaris depicting a coronation of Venus; "Polystefanus" and "Archeus" are most likely names of two horses of the owner of the house; see another mosaic showing the same subject from Carthage

The image used as background for this page shows a Chi-Rho, a Christogram, on a gravestone.