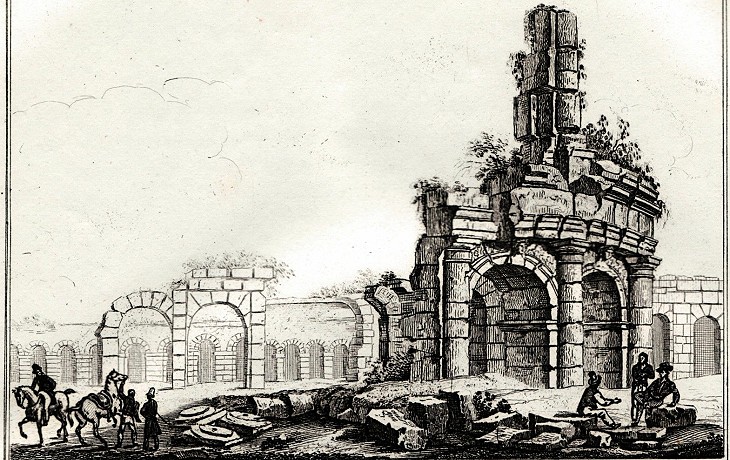 The amphitheatre, though much defaced by the loss of its marble, offers many ornaments peculiar to itself; it is considerably smaller than the Flavian amphitheatre at Rome, but worthy of the first among the second cities of the empire: the monuments still to be seen on this spot are certainly of a date long posterior to Capuan independence, and even to that of Roman liberty.
Henry Swinburne - Travels in the Two Sicilies. 1777-1780
I have paid a visit to the ruins of ancient Capua, and all that is connected with it.
Johann Wolfgang von Goethe - Italian Journey - March 1787 - translation by Charles Nisbet
A little to the left is a noble amphitheatre forming in many points of view a very picturesque object.
Sir Richard Colt Hoare - A Classical Tour through Italy and Sicily - Journey from Rome to Beneventum on the Appian Way in 1789 - 1819 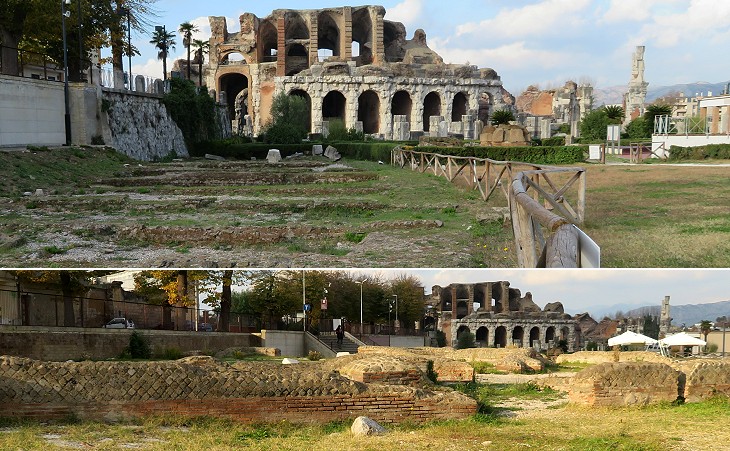 (above) Site of the first amphitheatre; (below) octagonal building, most likely a nymphaeum, a monumental fountain of the IInd century AD

The magnificent ruins of the Amphitheatre only date from imperial times. Its measurements were nearly those of the Roman Coliseum, and it was capable of accommodating 100,000 spectators. It was from the gladiatorial schools of Capua that Spartacus broke out with seventy companions in B.C. 73.
Augustus J. C. Hare - Cities of Southern Italy and Sicily - 1891
In the 1920s the area to the south of the amphitheatre was cleared of the rubble and levelled in order to create a large square. The lower structures of a smaller and older amphitheatre (most likely late IInd century BC) were found and near them those of a later monumental fountain. 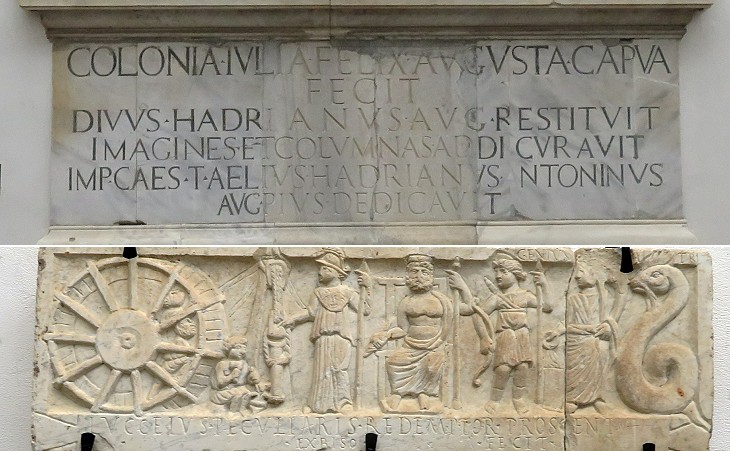 Museum of Campania at Capua: (above) inscription found in the amphitheatre (only the central section is original); (below) funerary relief of Lucceius Peculiaris showing a crane for lifting columns; the relief shows also Minerva, Jupiter and Diana and a man offering libation at an altar accompanied by a huge serpent, the "Genius Theatri", the protective spirit of the site (see also paintings depicting similar serpents at Ostia)

In 1726 a broken inscription was found in the amphitheatre which shed some light on its construction. The inscription was completed by Alessio Simmaco Mazzocchi, Dean of the Cathedral of Naples, who was involved in the analysis of the inscriptions and works of art which were found at Herculaneum in the 1740s. It was placed by Emperor Antoninus Pius to celebrate the embellishment of the building with statues and columns which was promoted by Emperor Hadrian.
The funerary relief of a redemptor proscaeni, a contractor employed in repairing a theatre, shows a crane for lifting columns; the engine is very similar to that shown in the Roman mausoleum of a contractor (it opens in another window) who is known to have worked at the construction of Colosseo. 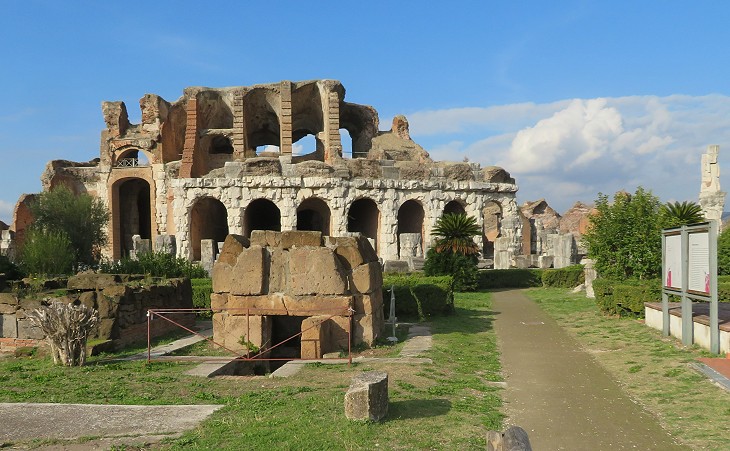 The amphitheatre and a tomb in the foreground; the two remaining arches of the outer ring are visible on the far right side of the image

The exact period of the construction of the amphitheatre has not been determined, but it is likely it was close to that of Colosseo, which was initiated by Emperor Vespasian in 72 AD. The amphitheatre is slightly smaller than its Roman twin. Swinburne found it considerably smaller, but perhaps his assessment did not include the outer ring, of which only two arches remain. 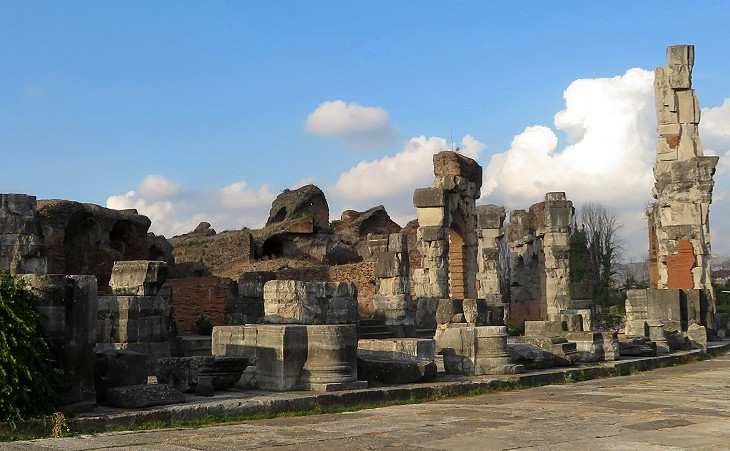 Outer ring of the amphitheatre

The lower order of the amphitheatre is Tuscan, the second Doric; what the upper ones were cannot be ascertained. Swinburne.
The outer ring had four arched storeys while in Colosseo the fourth storey is closed. Both buildings were decorated with engaged semi-circular columns. In Capua they were designed in Tuscan order, a simplified Doric order, while in Rome also the Ionic and Corinthian orders were utilized.

Small pillar with reliefs portraying Silvanus, Roman god of woods and fields (left), and Hercules (right); the image used as background for this page shows a relief of a snake below that of Hercules; see a relief portraying Antinous, Hadrian's favourite, as Silvanus

The building was surrounded by a number of small square pillars, of which only one remains. It does not have the holes which exist in the small pillars around Colosseo, which we know were used by skilled sailors of the Roman fleet to tie the ropes of velarium, a gigantic sail which protected the audience from direct sunlight. It is thought that at Capua temporary balustrades were placed between these pillars in order to isolate the area of the amphitheatre. 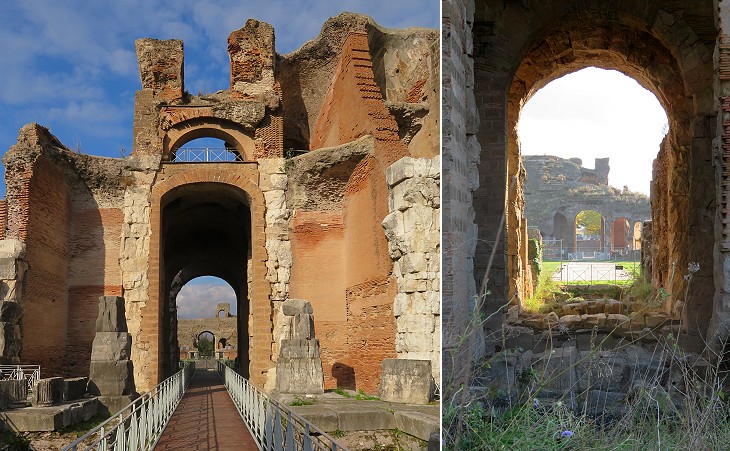 Similar to Colosseo the amphitheatre had four grand entrances which were reserved to city magistrates, members of religious colleges and other personages who did not go through the ordinary gates. They were also used for allowing access to the arena to processions or other ceremonies which preceded or concluded the gladiatorial combats. 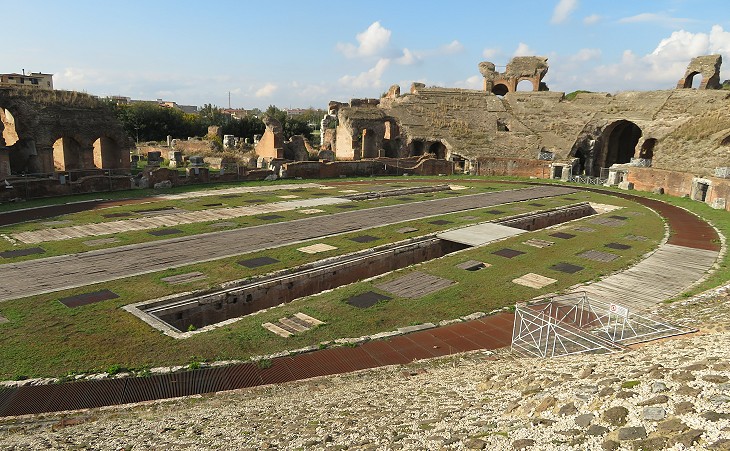 The four external arched storeys corresponded to four sections of the seating area: ima, media and summa cavea and an attic for those who bought the cheapest tickets. Only ima cavea, the lowest tier, is still partly standing. Small sections of media cavea, the middle section, are attached to the arches which supported them, while summa cavea and the attic have entirely disappeared. The floor of the arena where the fights took place was covered by timber panels which could be easily removed and replaced. A complex system of passages, including an elliptical one, lay beneath the arena.

It was built of brick, faced with stone, or marble; the little value set upon brick has preserved it, while the other materials have been torn down to mend roads, and build cottages. Swinburne
Swinburne was not entirely right in saying that the bricks of the amphitheatre had no value. As a matter of fact they too were taken away. The bricks of Terme di Caracalla in Rome were used to build the walls around the Vatican and it is likely that the bricks of the amphitheatre of Capua were utilized in the XVIth century fortifications of the new town which was founded in the IXth century three miles west of the old one. 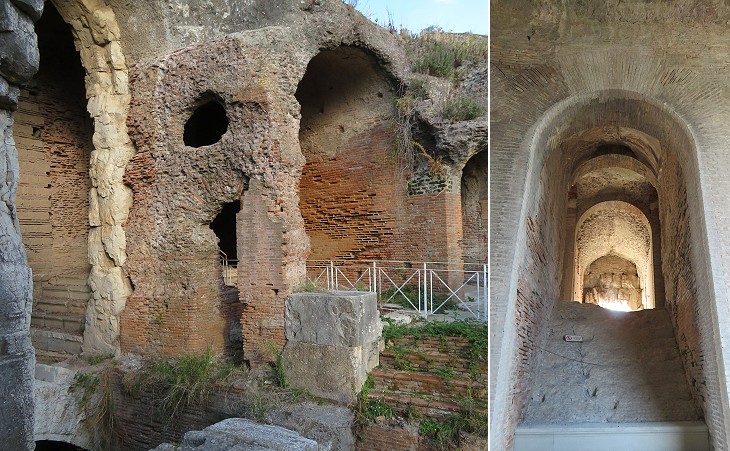 (left) Masonry structure of the amphitheatre near the northern grand entrance; (right) one of the "vomitoria", large internal staircases which allowed easy access to the the seating section

The use of fired bricks was one of the key elements of the construction techniques which allowed the Romans to build large facilities which, when not destroyed by the action of men, have withstood the ravages of time (e.g. the Pantheon of Rome). The process for manufacturing good quality fired bricks was perfected in the Ist century AD and after this development the use of stones and marbles had mainly a decorative purpose as one can see by visiting Villa Adriana. 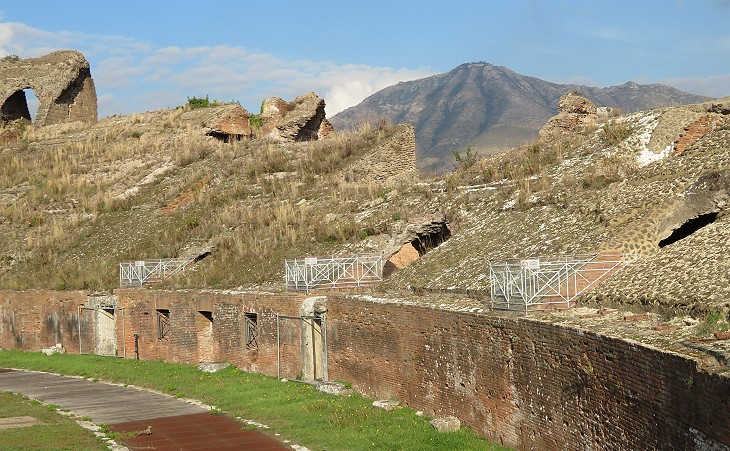 Amphitheatre: "opus caementicium" structures supporting the seating section and Mt. Tifata behind them

Another key element of the Roman construction techniques was the use of pozzolana (after Puteoli, a town near Naples), a volcanic ash which was mixed with lime to make a very effective kind of mortar. At Capua it was used for creating the sloping structure where the stone seats were placed; the latter were removed, but the former is still there.
The Mons Tifata, above Capua, so often mentioned in the history of the campaigns of Hannibal, was once crowned by a temple of Jupiter (..). Near the foot of the mount, is the site of a temple of Diana Tifatina. Hare 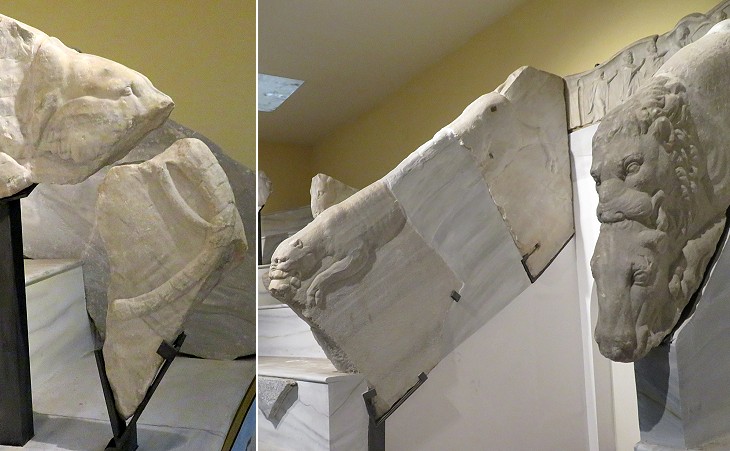 Museum of the Amphitheatre: marble divisions (see those of Colosseo)

Each tier of the cavea was divided into sectors and to facilitate their identification they were separated by low marble screens which also served as handrails. Those found at Capua were decorated with very fine reliefs of wild animals, a likely reference to venationes, combats with beasts or between them, which were highly popular as an alternative to gladiatorial fights. You may wish to see mosaics showing how wild beasts were captured in Africa and then shipped to the amphitheatres of the largest cities of the Roman Empire and gladiatorial combats and venationes. 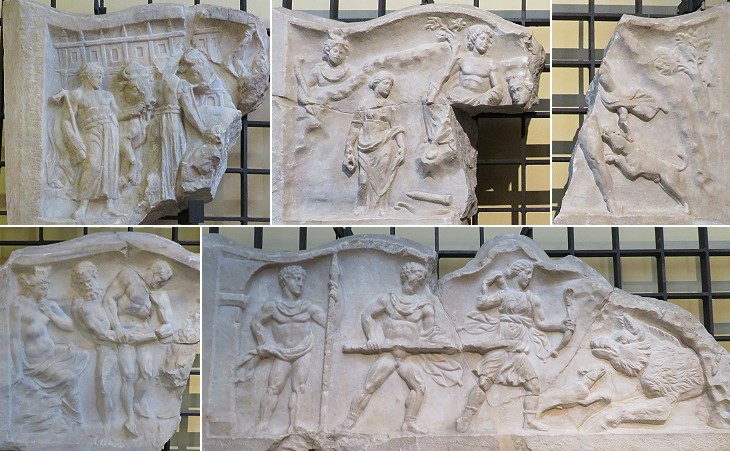 Museum of the Amphitheatre: marble balustrades: (above-left) sacrifice of a bull; (above-centre) gods; (above-right) Actaeon; (below-left) Hercules holding Antaeus aloft, because that giant was invincible as long as he remained in contact with his mother, the Earth; (below-right) boar hunt

The decoration of the seating section was completed by balustrades with a variety of reliefs; they show scenes of hunts or mythological episodes. They were found in recent times together with the section divisions and are on display in a small museum at the amphitheatre. Larger archaeological museums exist at (New) Capua and at S. Maria Capua Vetere (Old), the name of the modern town which eventually developed on the site of the ancient one. 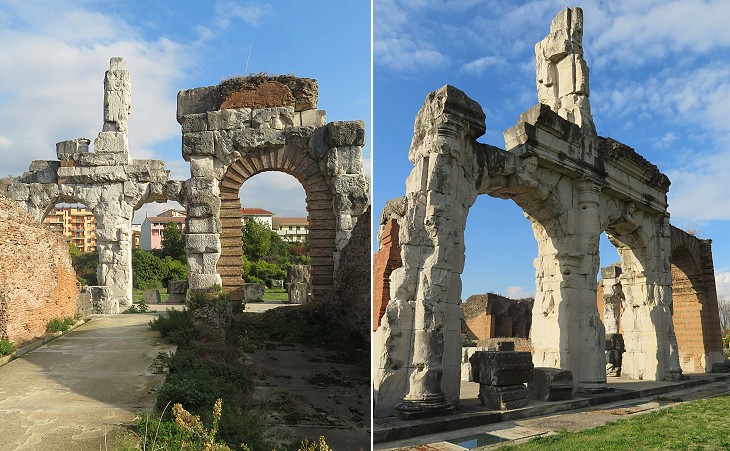 Engravers and painters of the past had two options when they depicted the amphitheatre: either to show its labyrinthian interior or the two remaining arches of the outer ring. This second alternative appealed in particular to those in search of classical architectures. The design of the outer ring was very similar to that of Colosseo; the entrances were not numbered, but had a decorated keystone, which made them easily identifiable. Also the second storey had arches with decorated keystones for a total of 240. 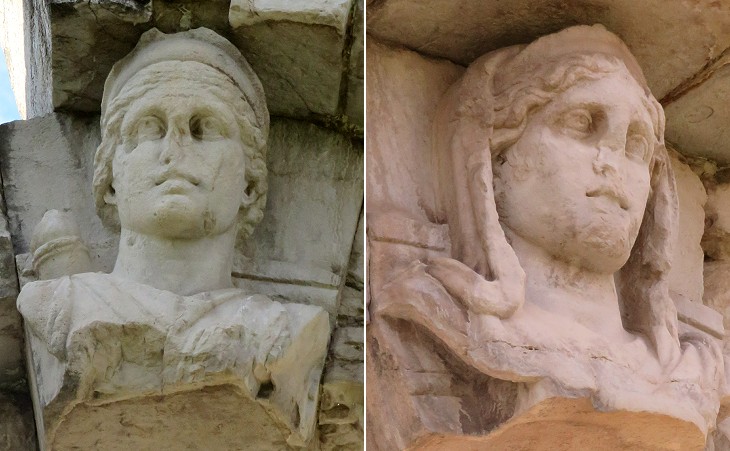 On the key-stone of each arcade was the bust of a deity of a colossal size and coarse execution, much too massive for the rest of the work. Swinburne
The keystones depicted Jupiter, Juno, Ceres, Diana, Mercury, Minerva, Volturno (the river near Capua), Apollo and Mithra in addition to Pan, satyrs and theatrical masks. Some of the keystones were used for the decoration of the Town Hall of New Capua. 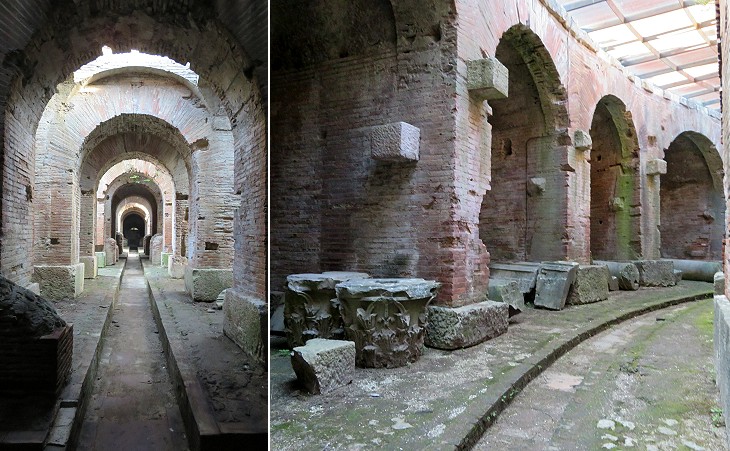 Today these long underground passages house the broken columns, capitals, lintels and other decorative elements which have been found when clearing the site from rubble and debris. We must imagine them bursting with activity in the hours preceding the munera (gladiatorial combats) and during them. There were lions roaring in their cages, gladiators warming-up, workers activating the engines for opening the ceiling, all under the vigil eye of the munerarius, the producer of these shows (you may wish to read Mark Twain's Coliseum Playbill). 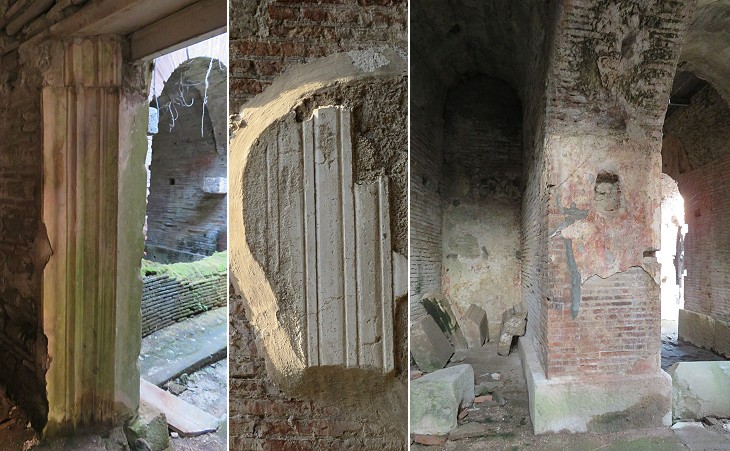 Gladiatorial combats were initially held as part of funerary ceremonies as one can see in reliefs found at Lucus Feroniae. The gladiatorial schools of Capua had such a reputation for the effectiveness of their training methods that in 105 BC Consul Publius Rutilius Rufus requested the help of one of these schools to teach combat techniques to the legionaries. It is thought that the last shows, most likely exhibitions of wild animals, occurred in the early VIth century when Italy was ruled by the Ostrogoths. 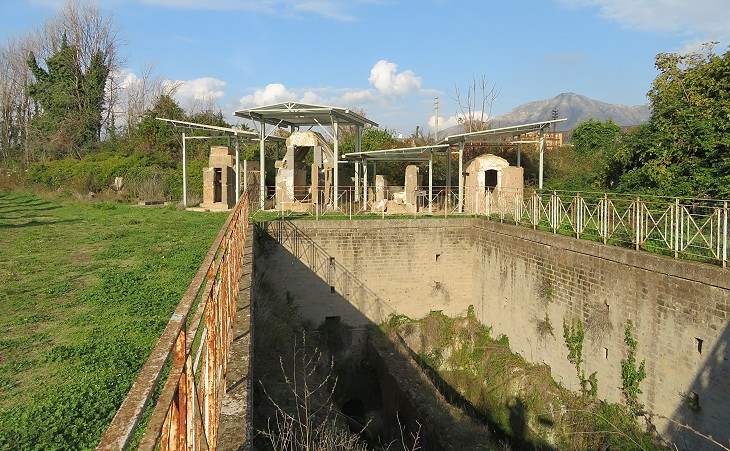 Cistern of the amphitheatre and reconstructed Samnite tombs

The underground passages had exits from the amphitheatre in two opposite directions. Westwards a long sloping passage reached the level of the ground to allow carriages to enter the area under the arena; eastwards another passage reached a very large cistern, the water of which was used to clean the arena after the shows. Archaeologists have found evidence that the amphitheatre was built in an area which was previously used as a necropolis by the Samnites. 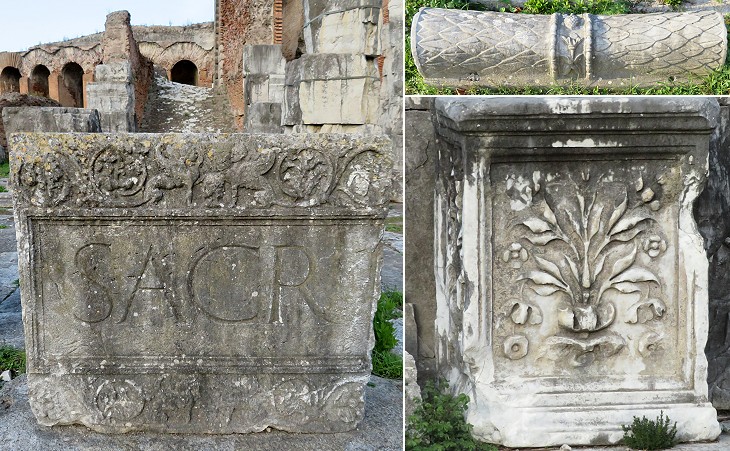 Inscription and decorative elements of the amphitheatre

Indeed it is the fault of this building to be clumsy in its architecture, but perhaps we judge unfairly upon the view only of its present state; when it was perfect in its height and forms, these defects may have vanished, or, at least, have been converted into an appearance of strength and majesty characteristic of such a public edifice. Swinburne