You may wish to see a map of the area and a short introduction to this section or a page on Palazzo Farnese first. 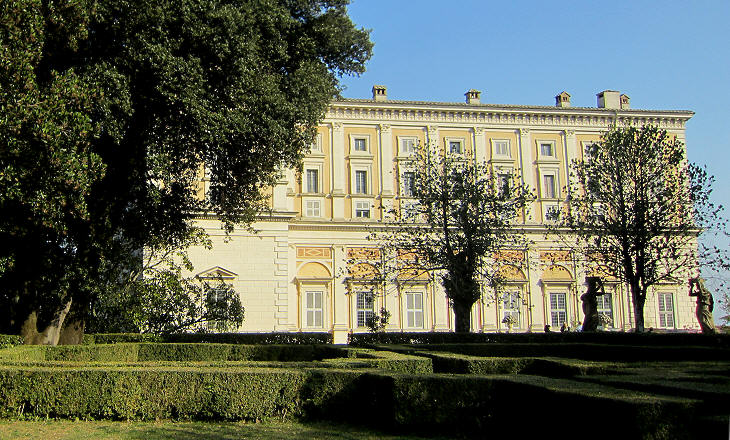 Guidebooks to Italy are not consistent in the way they name the complex built by Cardinal Alessandro Farnese iuniore at Caprarola. Italian guidebooks including that by Giusepe Vasi, stress the importance of the palace by referring to the complex as Palazzo Farnese; French guidebooks refer to it as Château Farnese whereas English ones call it Villa Farnese, thus giving more emphasis to the gardens behind the palace.
Cardinal Farnese and his guests could reach the gardens directly from the first floor of the palace where the main halls were located via a bridge, a solution which was adopted in other villas designed at a later period such as Palazzo Barberini and Giardino Colonna. 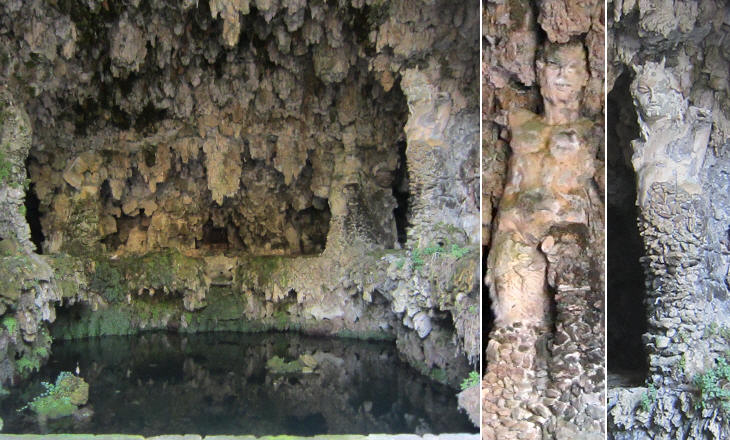 The villas of the ancient Romans had a facility where the host and his guests spent the hottest hours of the day, i.e. a grotto, a large artificial cave with a fountain which was often embellished with statues. In the XVIth century Ninfeo di Egeria was a widely known example of such an artificial cave.
Cardinal Farnese was a great admirer of the Classical World and he asked il Vignola, the architect who designed the palace, to build a grotto in the square gardens behind the building. Roughly cut faces of satyrs peering from the rocks of the grotto were part of the scherzi (tricks) of the garden. A very similar grotto was designed in the following century at Villa Pamphilj del Bel Respiro. 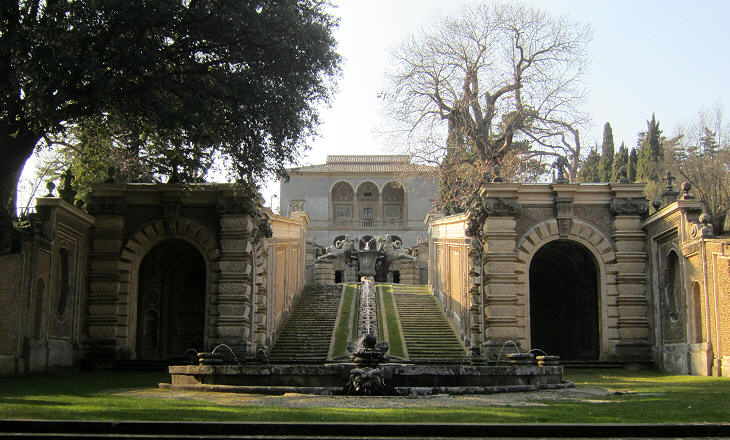 Are we really in Arcadia, when the old steward opens the door from the dark halls where the Titanic forms of the frescoed figures loom upon us through the gloom, to the garden where brilliant sunshine is lighting up long grass walks between clipped hedges?
Augustus J. C. Hare - Days near Rome - 1875
The gardens of Palazzo Farnese were designed after those of Villa d'Este at Tivoli. In the latter they are in full view from the palace which is located at their top. At Caprarola instead Cardinal Farnese chose to hide the main section of the gardens inside a wood of chestnut trees, very similar to those which covered the environs of Caprarola. The cardinal's guests were expected to "discover" these gardens while walking in the wood. 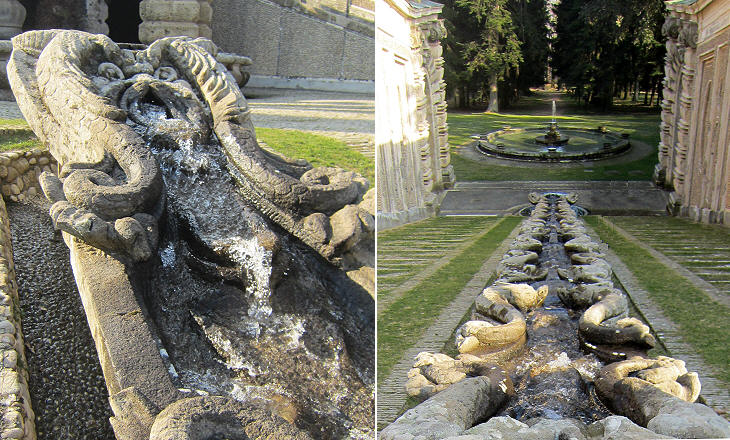 The surprise effect desired by Cardinal Farnese today is in part diminished by the 1950s replacement of chestnut trees with larches and by the opening of a wide path across them. The fountain on the steps leading to a small casino resembles Fontana degli Appennini at Villa Lante di Bagnaia which was designed by il Vignola a few years after the construction of Caprarola. Vignola designed other gardens for Cardinal Farnese at Orti Farnesiani in Rome. 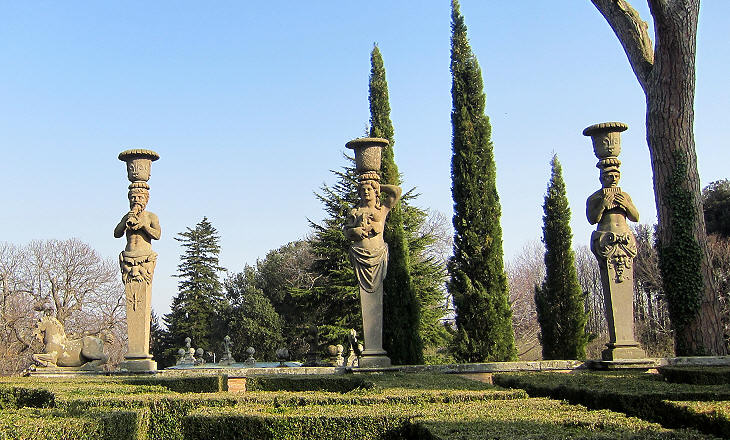 This terrace is named after the caryatids which surround it; the reference to caryatids, pillars in the form of draped female figures supporting an entablature, is not correct. Giardino delle Erme would be a more appropriate name because herms, pillars with a carved head on top, were used by the ancient Greeks as boundary markers. The herms of Caprarola influenced the design of the private gardens of Villa Borghese in Rome. 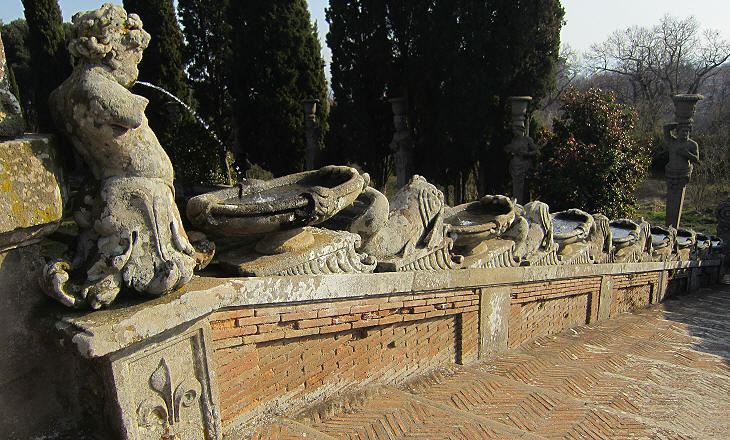 Fountains at the sides of Palazzina del Piacere

The murmur of water falling from a low height was highly praised by the ancient Greeks and Romans and was thought to have soothing effects on the mind. This belief influenced the design of the fountains at Caprarola as well as of those at Arab hospitals, such as Bimaristan Argoun at Aleppo. 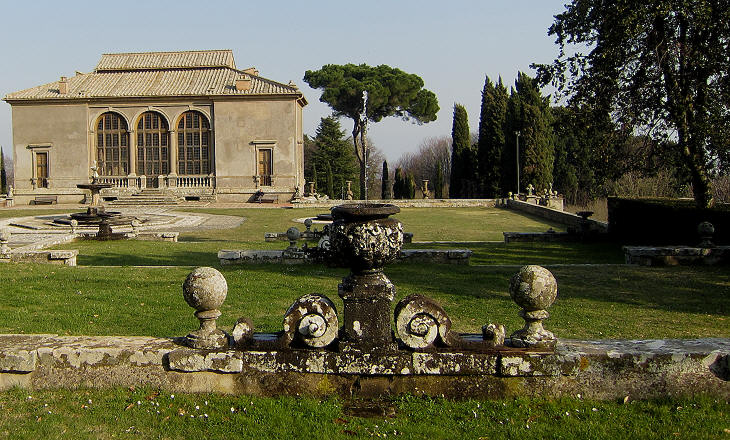 We reach an upper garden before the fairy-like casino which was also built by Vignola. Here the turfy solitudes are encircled with a concourse of stone figures, in every variety of attitude, a perfect population. Hare
The Upper Gardens and their small casino were completed by Giacomo Del Duca after the death of il Vignola. The name given to the small casino should not be meant as a reference to the pleasures of the flesh, but to those of the mind. Cardinal Farnese befriended with many poets and in particular with Annibal Caro who gave him advice on the myths and symbols depicted in the decoration of the palace and of the gardens.
Similar to Pope Pius IV at his casino in Rome Cardinal Farnese enjoyed spending his time with friends discussing poetry, art and theology. 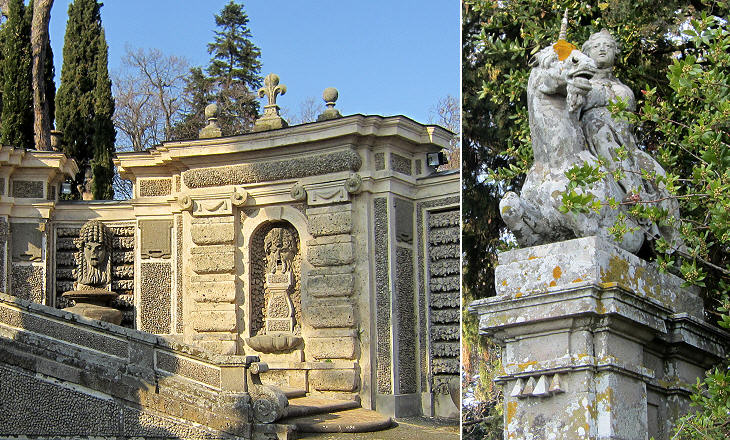 Heraldic symbols of the Farnese in the gardens: fleurs-de-lys and unicorns

Excerpts from Giuseppe Vasi 1761 Itinerary related to this page (the itinerary ends at Caprarola):