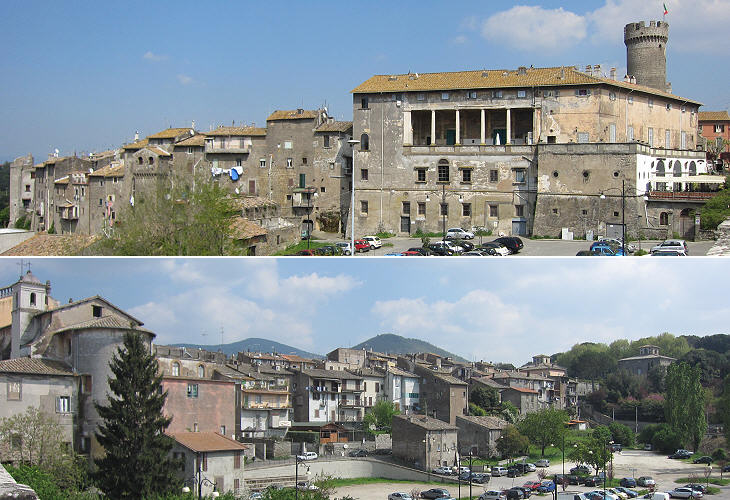 (above) "Città di dentro" the medieval part of Bagnaia with the Bishop's Palace; (below) "città di fuori" the Renaissance quarter leading to Villa Lante

Two miles further S. Maria della Querce, a tall tower and a quaint castle guarding a little village announces Bagnaia. The castle was the old residence of the Lante family, and though neglected now and let out to poor families, it still retains much that is interesting in the interior.
Augustus J. C. Hare - Days near Rome - 1875
Bagnaia is a small town on the slopes of Monte Cimino a few miles from Viterbo, known in medieval times for its thermal water (bagno, bath). In the late XVth century it became the summer residence of the bishops of Viterbo, many of whom were important cardinals; in the following century they built a villa which was linked to the old town by a new quarter; thus Bagnaia is made of two distinct parts: the old one (città di dentro, inside town) with a very medieval aspect and the new one (città di fuori, outside town). (left) Renaissance fountain and tower protecting the only entrance to old Bagnaia; (right) gate of old Bagnaia through the Bishop's Palace with a coat of arms of Pope Alexander VII

Cardinal Raffaele Riario, a relative of Pope Sixtus IV, was in charge of Viterbo in 1498-1506; he felt that the Bishop's Palace was too modest a residence for him (in the meantime he was building Palazzo della Cancelleria in Rome) and he started the process which led to today's town. In addition to Cardinal Riario, the development of Bagnaia is associated with two other cardinals: a) Cardinal Gian Francesco Gambara, who was bishop of Viterbo in 1566-1576 and who had family bonds with the Farnese and with Cardinal Carlo Borromeo; b) Cardinal Alessandro Peretti Montalto, a relative of Pope Sixtus V who in 1590-1612, completed the villa initiated by his predecessors. 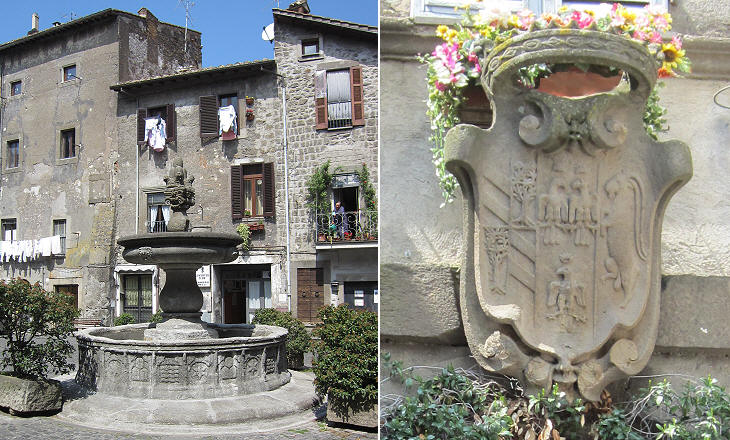 (left) Main square of old Bagnaia with a fountain built by Cardinal Montalto; (right) coat of arms of the Lante Della Rovere

Life in old Bagnaia centred around a small square surrounded on two sides by the Bishop's Palace, which in 1656 became a possession of Ippolito Lante, Duke of Bomarzo, together with the villa; Ippolito Lante owned in Rome a villa, small in size, but with a grand view over the city. All the inhabitants had to come to the square to collect water from the fountain decorated with the heraldic symbols of Cardinal Montalto (which you can also see in the image in the background of this page). 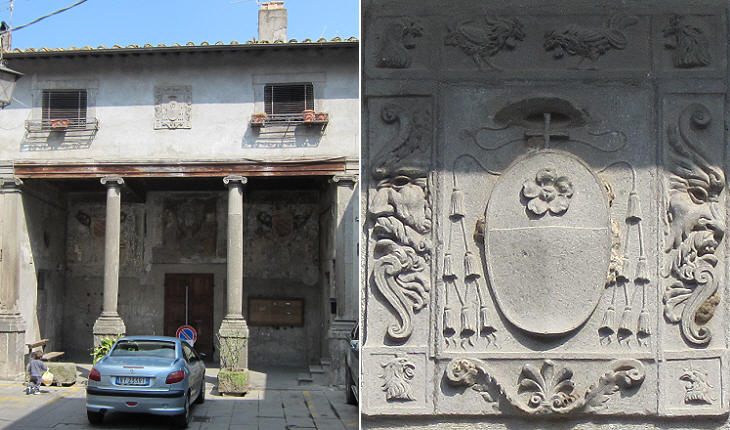 The building shown above was for some time the Town Hall of Bagnaia; it is decorated with an elaborate coat of arms of Cardinal Riario, very similar to those which embellish Palazzo della Cancelleria; this coat of arms is surrounded by cocks (It. galli) a reference to Jacopo Galli, an advisor to the cardinal. Paintings on the walls of the loggia show other coats of arms, including that of Cardinal Antonio Barberini the Younger, nephew of Pope Urban VIII, but they are in poor condition. 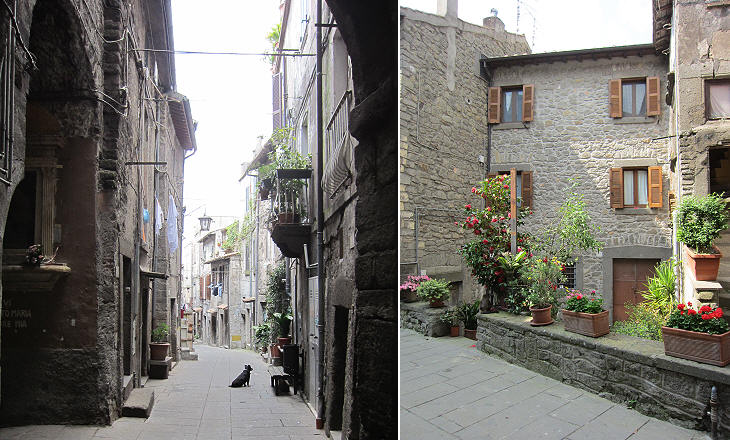 Old Bagnaia is surrounded by a deep ravine on three sides and the only access to it is through the gate in the Bishop's Palace; for this reason it has retained its medieval aspect. 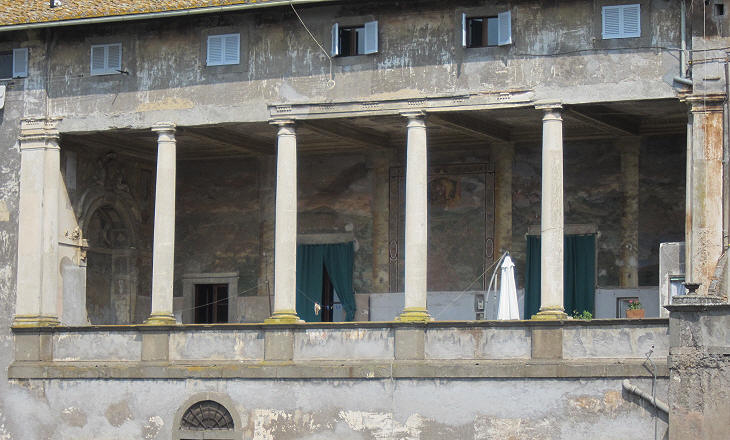 Loggia of the Bishop's Palace

The Bishop's Palace is also known as Palazzo della Loggia, for the loggia on its external side, which Cardinals Gambara and Montalto decorated with paintings showing views of towns and mythological episodes, subjects similar to those which decorate the villa. In 1576 Cardinal Gambara promoted the enlargement of Bagnaia by opening three streets departing from the old town; a large church was built at their point of departure; a scheme similar to that of Piazza del Popolo. Cardinal Gambara also built an octagonal chapel on the road to S. Maria della Querce and Viterbo; it was dedicated to St. Roch so it was probably built to celebrate the end of a pestilence, as this saint is specifically invoked against the plague.