Silva erat Ciminia magis tum invia atque horrenda quam nuper fuere Germanici saltus, nulli ad eam diem ne mercatorum quidem adita. The Ciminian forest was, in those days, more frightful and impassable than the German forests were recently found to be; not a single trader had, up to that time, ventured through it.
Livy - Ab Urbe Condita - IX - 36 Translation by Rev. Canon Roberts 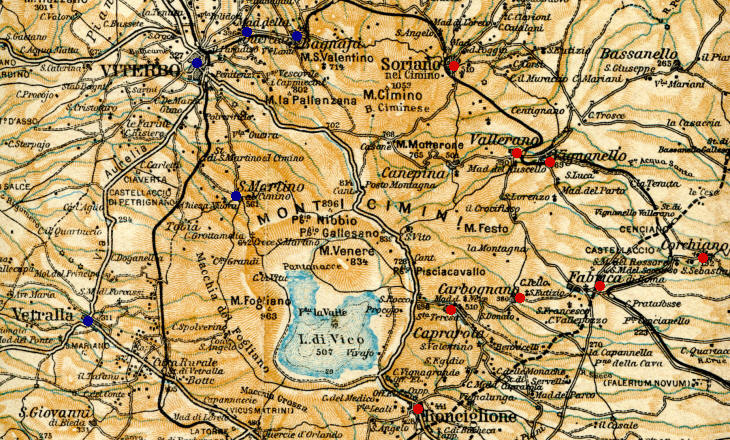 Cimino is the name given to an extinct volcano to the south of Viterbo. It is also the name of the highest peak of the mountains which form the volcano crater which is filled by a small lake. Monte Cimino was known for its impenetrable woods (Silva Ciminia) which in part still cover it. Acorns, hazel-nuts and chestnuts, in addition to firewood and charcoal, were (and to some extent still are) the main products supporting the local economy. 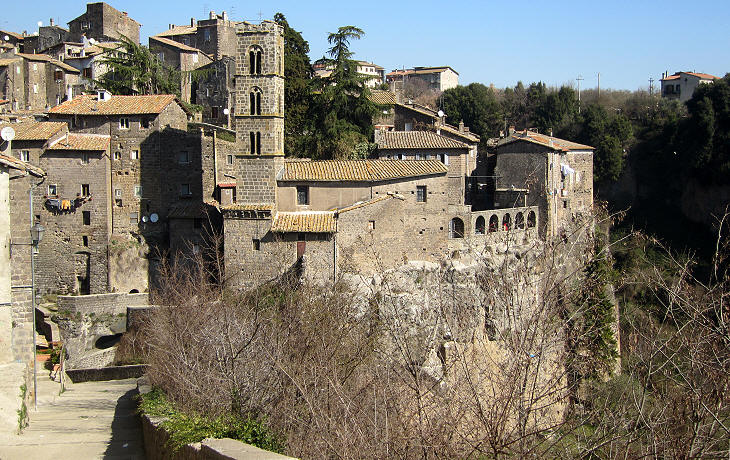 The medieval section of Ronciglione with the bell tower of S. Maria della Provvidenza (a side nave of the church fell into the ravine in the XVIIIth century)

Below the inn is one of the deep ravines so peculiar and apparently so necessary to Etruscan cities, perforated with tombs, and with a ruined castle (La Rocca) and an old church (La Providenza) clinging to its sides. It is most pleasant in these old places to have plenty ot time, and no fixed plans to tie one down. The walks in the still evening light along the edge of these wonderful gorges are so inexpressibly charming, and the power of resting from the glowing mid-day heat in the great shady churches.
Augustus J. C. Hare - Days near Rome - 1875
Ronciglione was a very minor Etruscan and Roman settlement; it acquired importance during the Middle Ages because it was easily defensible and because it was located along one of the routes used by pilgrims to reach Rome. The volcanic rock upon which the medieval part of the town stands is subject to erosion, although to a much lesser extent than Civita di Bagnoregio, another town near Viterbo. 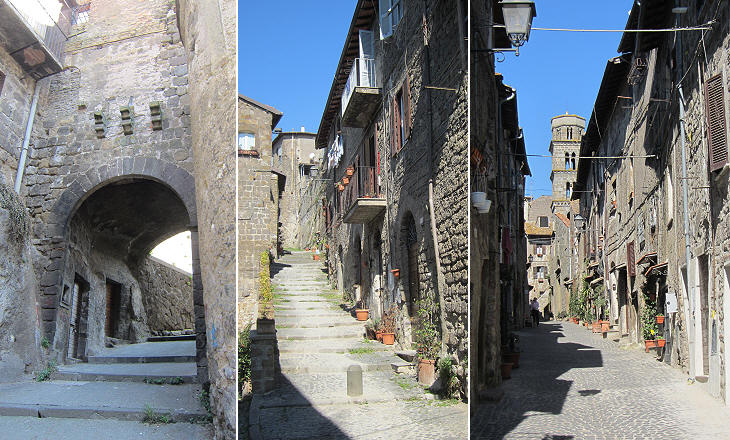 The southern gate of medieval Ronciglione was placed in a hidden position and it was protected by a round tower; the (lost) northern gate at the top of the hill was protected by a small castle; two parallel streets, which have retained most of their medieval appearance, linked the two gates. 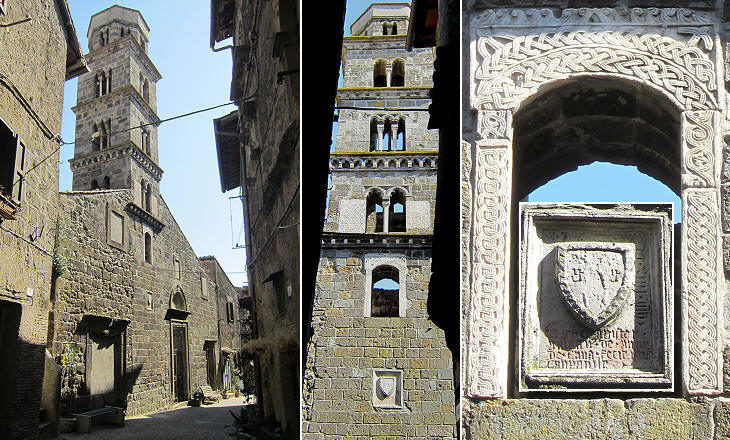 S. Andrea and details of its bell tower; (inset) coat of arms of the Anguillara

During the XIVth century two families competed for the possession of Ronciglione: the Anguillara, who had many fiefdoms around Lake Bracciano, one of which is still named after them, and the Prefetti di Vico, a family of German origin with fiefdoms in northern Latium from Bolsena to Civitavecchia. The bell tower and the façade are all that is left of a medieval church on the edge of the precipice. The bell tower was redesigned in 1436 and it was embellished with decorated marbles, most likely parts of an old chancel screen. 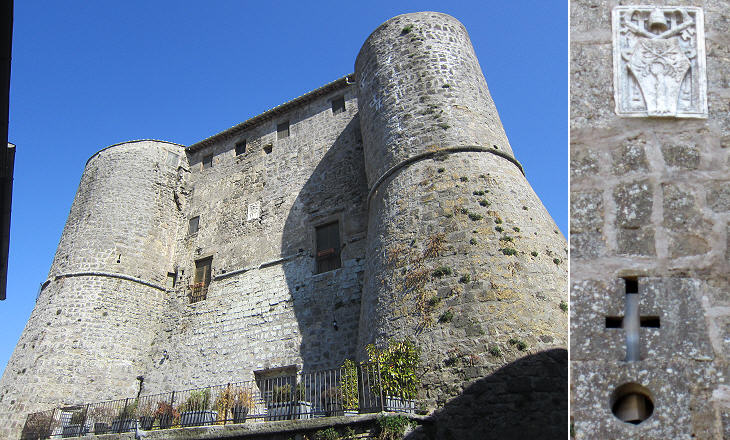 (left) I Torrioni (the Big Towers); (right) a detail showing the coat of arms of Pope Sixtus IV

In the second half of the XVth century, similar to other towns of the region, Ronciglione returned under the direct rule of the pope.
Pope Sixtus IV strengthened the castle at the top of the town. The construction of round rather than square towers was suggested by the first engineering studies on how best walls would withstand the effect of cannonballs (see other images of this castle and of other fortresses near Ronciglione). 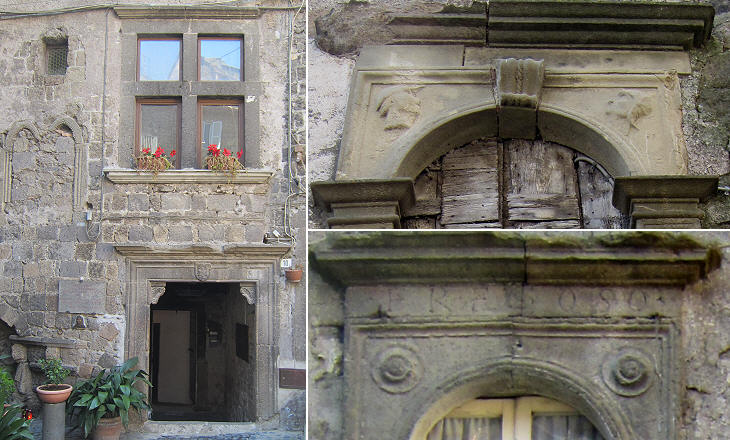 Renaissance details in the medieval quarter

In the XVIth century Ronciglione was acquired by Cardinal Alessandro Farnese seniore who in 1534 became Pope Paul III. During his pontificate he united Ronciglione to other family possessions north of Viterbo to form the Duchy of Castro and Ronciglione, which he assigned to his son Pier Luigi. 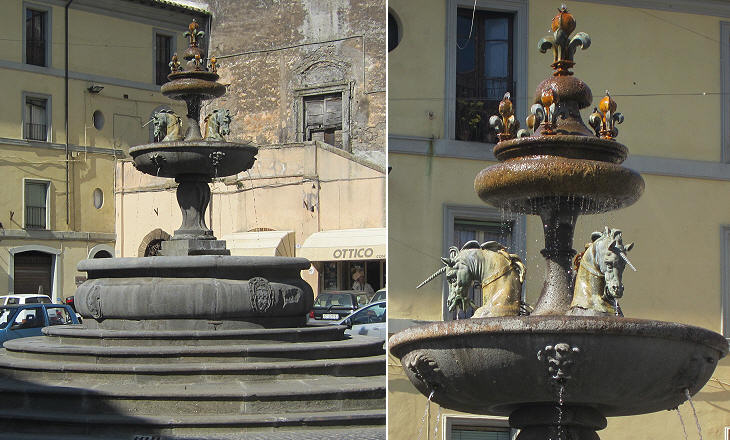 The Farnese promoted the development and embellishment of Ronciglione. Cardinal Alessandro Farnese iuniore (junior) built an imposing mansion at nearby Caprarola which was designed by il Vignola. According to old sources Vignola designed the elegant main fountain of Ronciglione which was decorated with bronze fleurs-de-lys and unicorns, the heraldic symbols of the Farnese. Today the fountain is attributed to Antonio Gentili da Faenza. 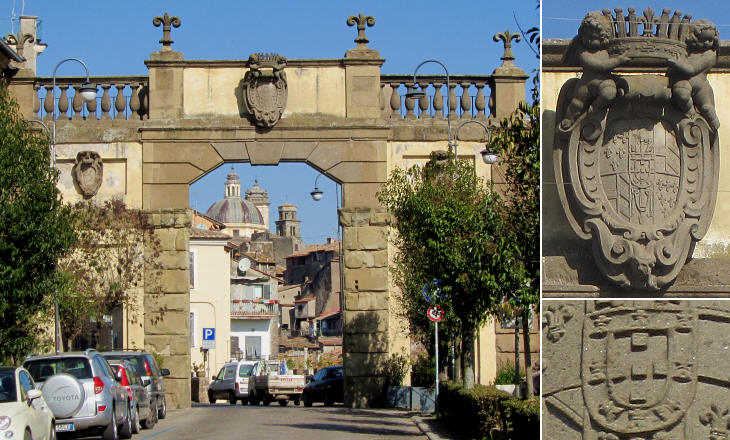 Porta Romana; the coat of arms shows at the centre the symbol of Portugal, because the mother of Duke Odoardo Farnese was the heiress to the throne of that country

In 1620 Odoardo Duke of Castro, at the time under the regency of his uncle Cardinal Odoardo Farnese, built a grand entrance to Ronciglione which had grown much beyond the medieval settlement. Porta Romana is attributed to il Vignola, but only in the sense that it was built on the basis of a sketch made by the architect.
The Farnese regarded their duchy as a truly independent state, a position which was challenged by Pope Urban VIII and by his successor Innocent X. The latter in 1649 sent troops to invade the duchy and Castro, its capital, was razed to the ground. 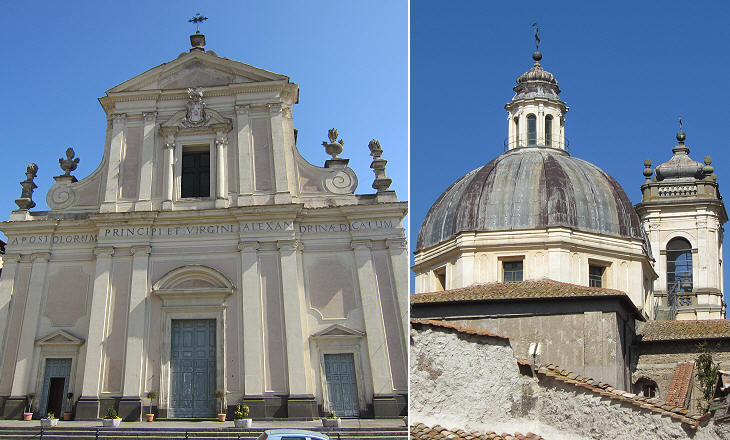 Ronciglione did not suffer because of the transition from the Farnese to direct papal authority. A new large church was built on the highest point of the town in the second half of the XVIIth century. There is some uncertainty about the extent of the involvement of Pietro da Cortona and Carlo Rainaldi in the design of the church. The façade is rather plain, unlike other works of the two architects, whereas the dome resembles those of the twin churches designed by Rainaldi at Piazza del Popolo. 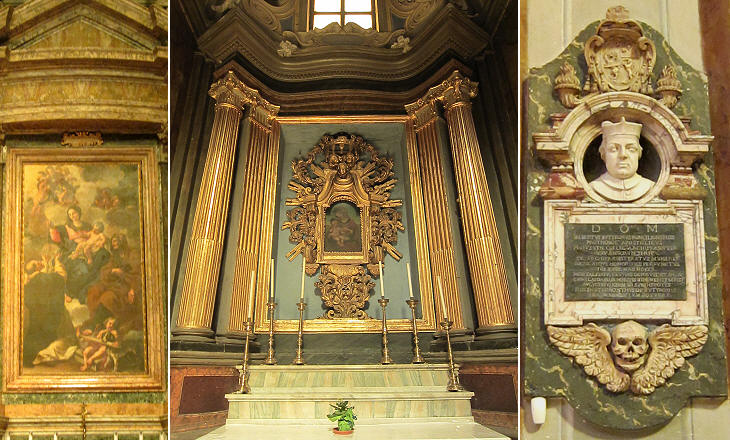