Giardino Colonna
(Vasi at work in the Grand View of Rome) 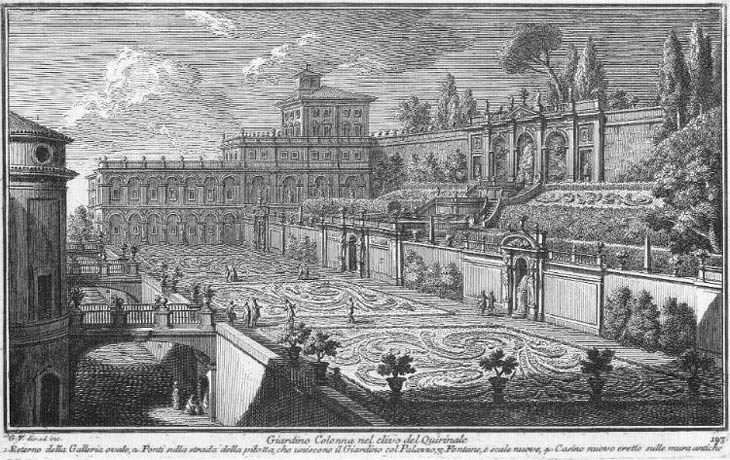 In 1761 Giuseppe Vasi relied on the courtesy of a neighbour in order to engrave this view of the very secluded gardens the Colonna had behind their palace. They were arranged in a series of terraces on the western slope of the Quirinal Hill and four small bridges linked them with the palace; the structures supporting the terraces were in part those of a Temple to Serapis built by Emperor Caracalla; the ruins of the temple were pulled down in 1630 when the design of the gardens was completed.
The view is taken from the green dot in the small 1748 map here below. In the description below the plate Vasi made reference to: 1) Oval Gallery of Palazzo Colonna; 2) bridges over Via della Pilotta; 3) new fountains and steps; 4) new casino built on the ancient Roman walls. The small map shows also: 5) entrance from Strada di Montecavallo; 6) Torre Colonna; 7) site of today's Pontificia Università Gregoriana; 8) S. Croce e S. Bonaventura dei Lucchesi; 9) Palazzo Testa Piccolomini. 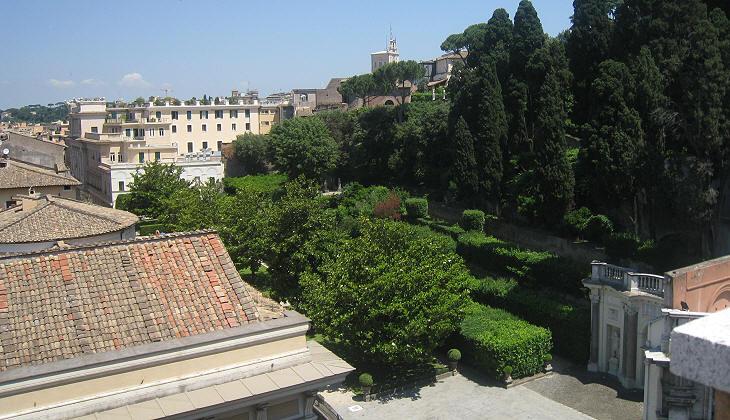 Similar to during Vasi's time, the courtesy of a neighbour is necessary to have a comprehensive view of today's gardens; flower-beds have been replaced by trees and box hedges and in 1927 the new casino was pulled down for the construction of Pontificia Università Gregoriana; the high terrace from which the photograph was taken allowed views over the loggia of Palazzo del Quirinale and (in the right lower corner) over the niche housing a statue of Marcantonio II Colonna, the family hero.
The terrace enjoys a fine view over the domes of Rome (see below). 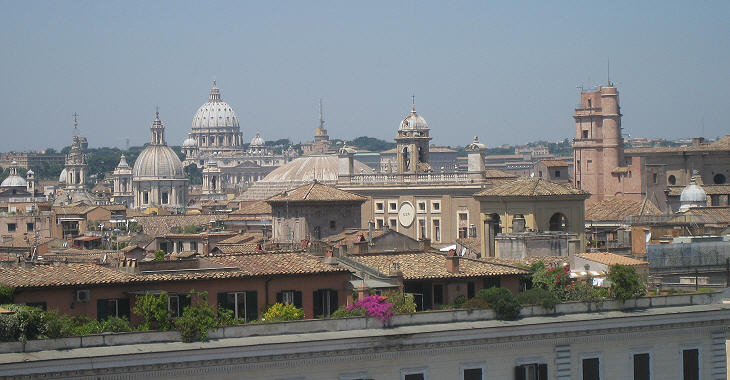 The gardens were designed at the initiative of Filippo I Colonna, Duke of Paliano and they had a grand entrance along the road which led to Palazzo del Quirinale. The portal was completed in 1618 and it was decorated with references to one of the family's heraldic symbols (a mermaid with two tails) and to the large vineyards the Colonna had near Marino, a town where every year the victory of Marcantonio II Colonna at Lepanto in 1571 is celebrated with a historical procession. In the late XIXth century the Colonna sold a portion of their gardens which bordered on those of the convent of S. Silvestro al Quirinale, but they retained most of the original property. In 1927 the new casino was pulled down, but not its lower part which still provides a background of statues and busts to the view of the gardens. A series of cascading fountains known as Teatro delle Acque was a typical feature of the villas which popes and cardinals built in the environs of Rome; that at Villa Torlonia in Frascati was particularly spectacular. The height of the Quirinal did not allow space for a similarly large fountain, but the Colonna felt they had to have it. Today its lower and upper ends are not as they were shown by Vasi. 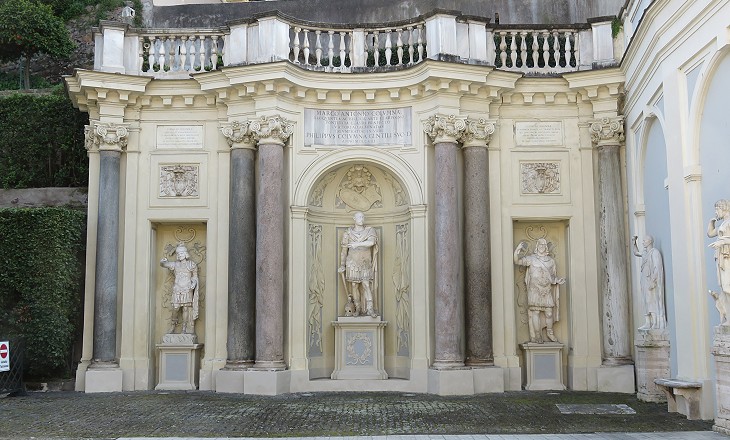 In 1713 Filippo II Colonna celebrated some members of the family who distinguished themselves as military leaders by placing statues which portrayed them in a niche that was visible from Sala della Colonna Bellica in the palace. Modern heads were placed on ancient statues of Roman emperors. 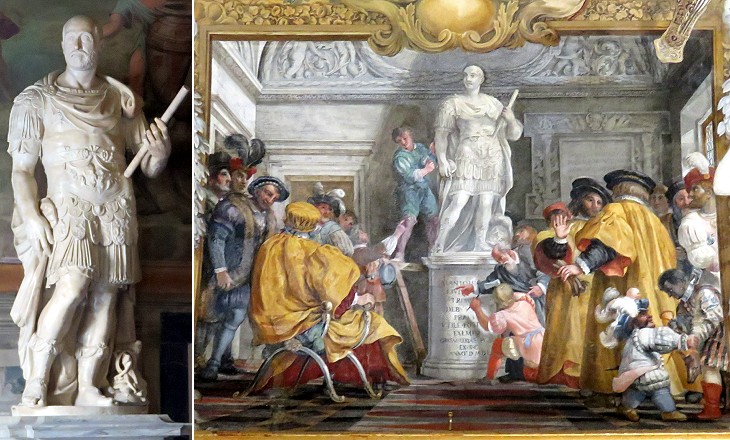 The statue of Marcantonio II Colonna recalls that which was erected to him in Palazzo dei Conservatori in 1595. The event is celebrated in a fresco on the ceiling of Sala Grande. 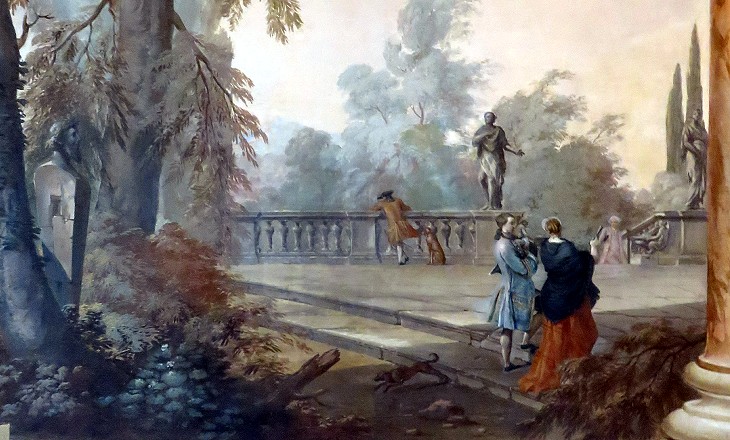 The Colonna could enjoy the pleasures of villeggiatura (a country holiday) just by crossing one of the small bridges which linked their palace to the gardens. These were not the only one they had. When the heat in Rome was unbearable they could move to one of the many palaces they had in their fiefdoms in the environs of the City, all of which had a large garden (e.g. Genazzano, Cave and Marino). 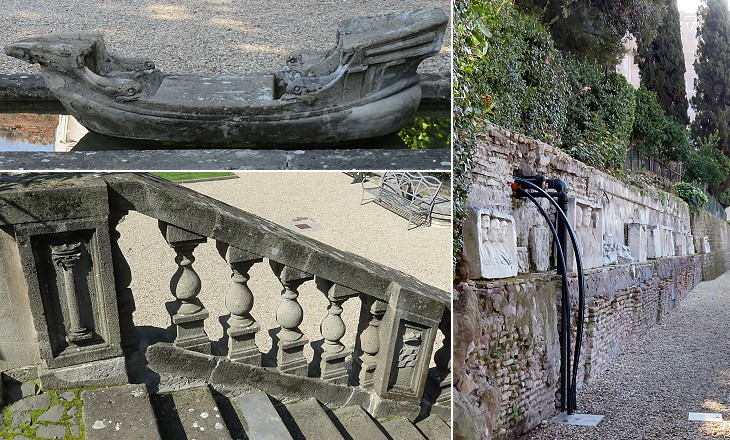 Details: (left-above) a small boat, vaguely resembling la Navicella; (left-below) balustrade with the coats of arms of the Colonna and of Lucrezia Tomacelli, wife of Filippo Colonna; (right) an alley with a series of ancient funerary reliefs

The decoration of Palazzo Colonna was extremely rich and it showed the wealth of the family. In the gardens the Colonna placed a small collection of antiquities they had found in their many properties, but they did it with a sort of detachment in a rather haphazard way, unlike what was done at Villa Medici and Villa Borghese. (left-above and right) Sarcophagus depicting a scene associated with maritime trade, perhaps from Porto because the lighthouse on a small side resembles that at the entrance of that harbour; (left-below) sarcophagus depicting the gate of the underworld

In 2015 the gardens were opened to the public on Saturday mornings. We no longer have to envy Henry James and other travellers of the past who visited them. I went yesterday to the Colonna gardens - an adventure that would have reconverted me to Rome if the thing were n't already done. It's a rare old place - rising in mouldy bosky terraces and mossy stairways and winding walks from the back of the palace to the top of the Quirinal. It's the grand style of gardening, ... (read more). 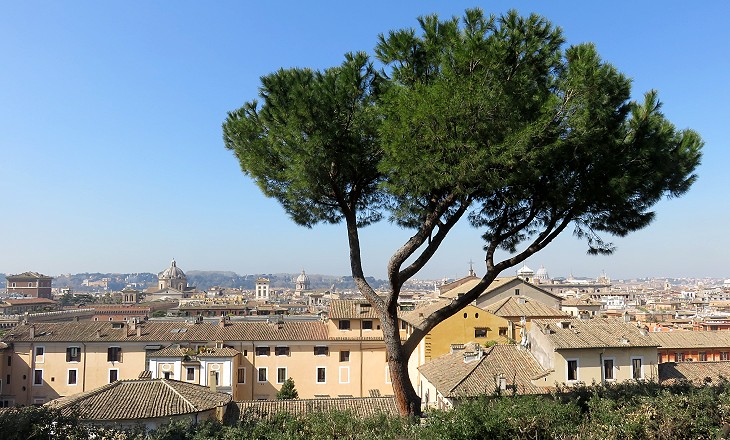 Only the stem is preserved of the grand historical pine-tree, which was planted on the day on which Cola di Rienzi died (October 8, 1354), and which was one of the great ornaments of the city till 1848, when it was broken in a storm.
Augustus B. C. Hare - Walks in Rome - 1875
The stone pine referred to by Hare can be seen in Vasi's plate at the top of the fountain. That shown above is almost in the same location.

Museo Nazionale Romano: Basin of a fountain of the IInd century AD which was found during excavations near Giardino Colonna in the late XIXth century

Of these works, which show the exquisite taste and finish characteristic of the golden era of Graeco-Roman art, I will mention one only, a lovely tazza, or basin of a fountain, exquisitely carved out of a single block of nero antico. The tazza, four feet six inches in diameter, is fluted all around, the rim being ornamented with beautiful lion-heads in full relief, through the mouths of which the water fell in graceful jets into the basin below.
Rodolfo Lanciani - Ancient Rome in the light of recent discoveries - 1888 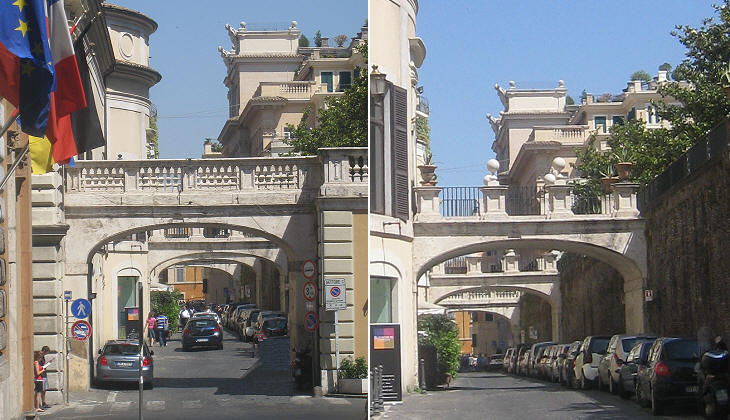 (left) Via della Pilotta seen from Via 4 Novembre (you may wish to see a 1909 watercolour by Yoshio Markino depicting it from the other side); (right) the two bridges which were added in the XVIIIth century

Via della Pilotta cannot be ranked among the silent streets of Rome because too many cars use it to reach Via della Dataria or to park along it. Yet it is a cosy street which is crossed by four small bridges; the first and the fourth were entirely built with travertine, while the central ones were added in 1756-1760 and their design is simpler; the image used as background for this page is based on a detail of the wrought iron balustrade of the gardens which shows a crowned column, the heraldic symbol of the Colonna. You may wish to see the bridges which linked Palazzo Barberini, Palazzo Farnese and Palazzo Santacroce to their gardens. 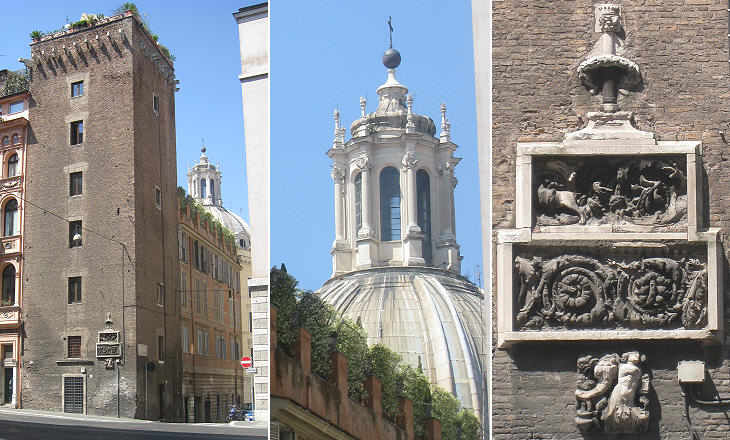 The Colonna lived in this area from the XIIth century onward and they built several towers to protect their houses. Torre Mesa, a lean and tall tower, was built on top of the Temple to Serapis. It was eventually pulled down by Filippo I Colonna. The only remaining tower of the Colonna's medieval defence system is situated along Via Quattro Novembre, a modern street leading to Via Nazionale. 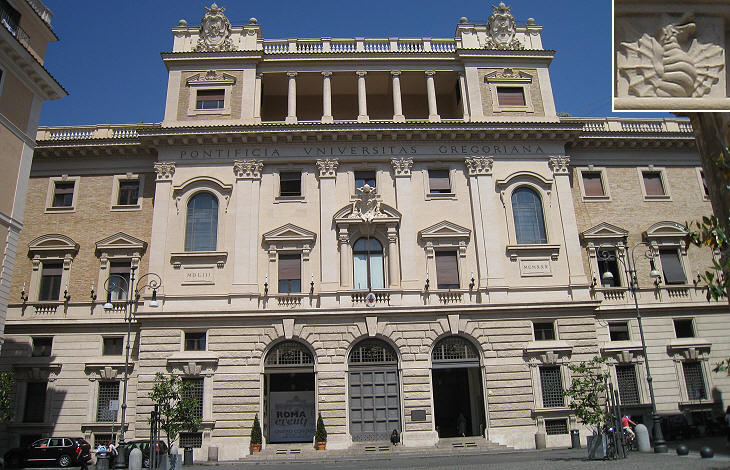 Pontificia Università Gregoriana in Piazza della Pilotta; (inset) a dragon, the heraldic symbol of Pope Gregory XIII in one of the windows

Via della Pilotta leads to Piazza della Pilotta, where the Romans used to play ball games. The eastern side of the square was closed by Palazzo Muti Papazzurri, while opposite it stood the new casino of Giardino Colonna. The building (aka Palazzo Piombino alla Pilotta) was pulled down in 1927 to make room for Pontificia Università Gregoriana; the university is dedicated to Pope Gregory XIII, the founder of Collegio Romano. The (patchy) façade of the new palace was designed by Giulio Barluzzi. 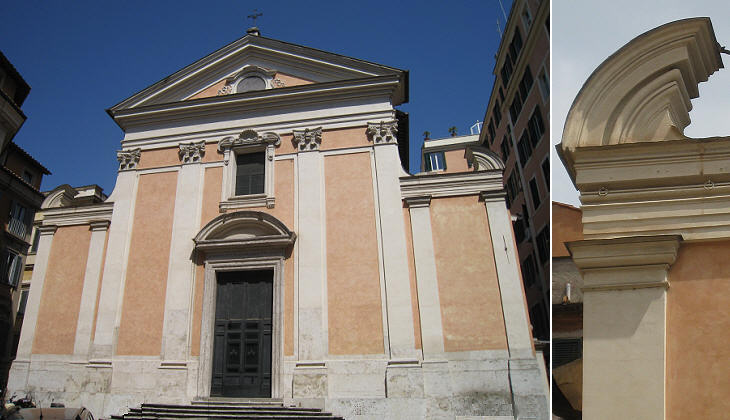 A church existed on this site as early as the IVth century; it was replaced by a larger church which is recorded as S. Nicola de Portiis; in 1575 it was incorporated into a new church dedicated to St. Bonaventura which was part of a Capuchin convent; in 1631 Pope Urban VIII relocated the Capuchins to a new convent and assigned the church to the citizens of Lucca living in Rome; the façade was redesigned towards the end of the XVIIth century by Mattia de' Rossi (see a list of national churches in Rome). The church was also dedicated to the Holy Cross, which in Lucca is the object of a special veneration and of a famous night procession - it opens in another window. 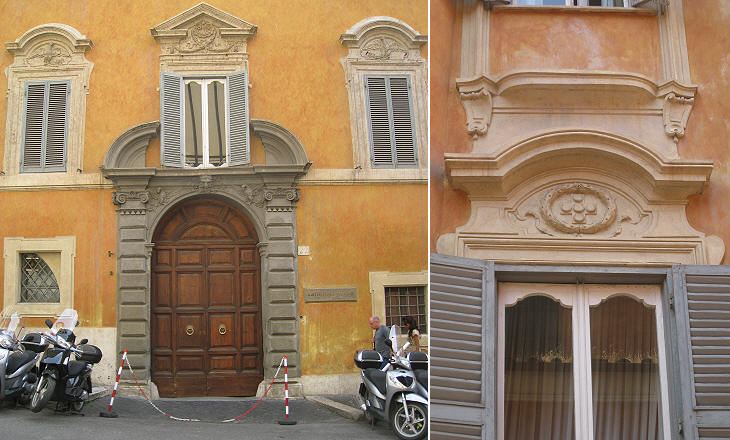 (left) Portal in Via della Dataria; (right) window with the heraldic symbol of the Piccolomini, five moons

The tiny square in front of the church is closed by an elegant small palace having its entrance in Via della Dataria; it was designed in 1718 by Filippo Barigioni for the Testa Piccolomini; they were not direct descendants of the Piccolomini, a family from Siena known for Pope Pius II and Pope Pius III, but one of their ancestors was allowed by the Piccolomini to add their surname and coat of arms to his own.