Map of the area surrounding Viterbo; the blue dots indicate the locations covered in this section with the exception of: a) Bagnoregio (blue arrow); b) Gallese, south of Orte; the red dots indicate towns which are covered in other sections: Montefiascone, Soriano nel Cimino, Vallerano, Vignanello, Fabrica, Caprarola, Ronciglione and Vetralla

The area around Viterbo was the cradle of the Papal State (Donation of Sutri) to the point that it was called Patrimonium Petri; in the XIIIth century several popes preferred to reside in Viterbo, rather than in Rome and for this reason the local tourist board advertises the town as the City of the Popes, similar to Avignon and Anagni.
The character of the towns covered in this section is medieval, but there also some fine Renaissance monuments at Bagnaia, Bomarzo and Madonna della Querce. 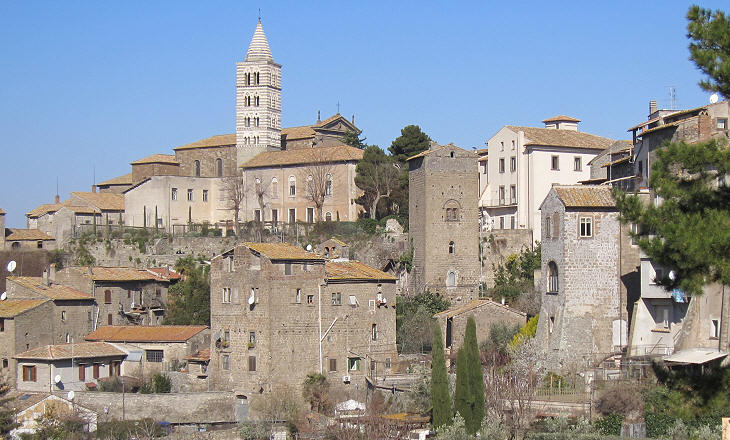 View of the hill where the Cathedral (S. Lorenzo) is located from Pianoscarano

The origin of Viterbo is linked to a Roman castrum (fortified site) on a small hill along Via Cassia, the road which linked Rome to northern Italy; the top of the hill housed a temple to Hercules, so it was a holy site even before the construction of the cathedral; the walls of medieval Viterbo included two other hills where also large churches were built. Pianoscarano is a small neighbourhood which retains a medieval aspect. 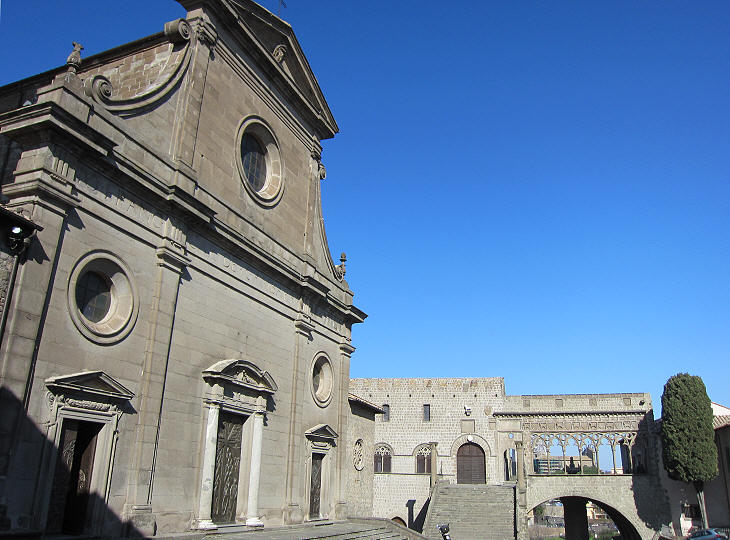 The cathedral stands in a kind of close, and is almost surrounded by different fragments of the half-de- molished Palace where the popes of the thirteenth century resided. In the great hall which still exists, met the conclaves.
Augustus J. C. Hare - Days near Rome - 1875
The Cathedral was built in the XIIth century and the Papal Palace in the following one, but this entirely medieval complex was modified by Cardinal Gian Francesco Gambara who was appointed bishop and governor of Viterbo in 1566; he was a man imbibed with Renaissance culture and commissioned a new façade for the cathedral; a few years later he started the construction of an elegant villa at Bagnaia, five miles east of Viterbo; he was appointed cardinal at the age of 28 by Pope Pius IV because he was a relative of Cardinal Carlo Borromeo, a nephew of the pope, and also of the Farnese, the family of Pope Paul III.
The image used as background for this page shows a detail of the cardinal's coat of arms depicting a shrimp (It. gambero). 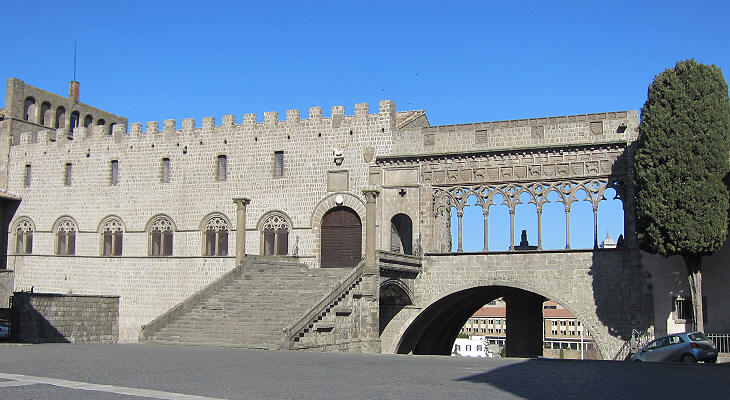 Papal Palace: Hall of the Conclaves (left) and loggia (right)

The Sicilian Question, i.e. the attempt by the popes to dislodge the German emperors of the House of Swabia from Sicily and southern Italy led to a period of unrest in Rome; in 1261 Pope Alexander IV sought refuge in Viterbo where he died in that same year; Pope Urban IV, his successor, never set foot in Rome and he left Viterbo for Perugia which is more distant from Rome; Pope Clement IV returned to Viterbo, where the local authorities started the construction of a residence for the papal court. In 1270, because the cardinals after almost two years of discussions had not yet elected the successor to Pope Clement IV, the access to the hall where they met was closed and the cardinals were locked inside; it was the first conclave (cum clave=with keys); the cardinals however were still unable to make a decision, so the inhabitants of the town broke the roof and supplied the cardinals with bread and water only; after a few days the new pope was elected. 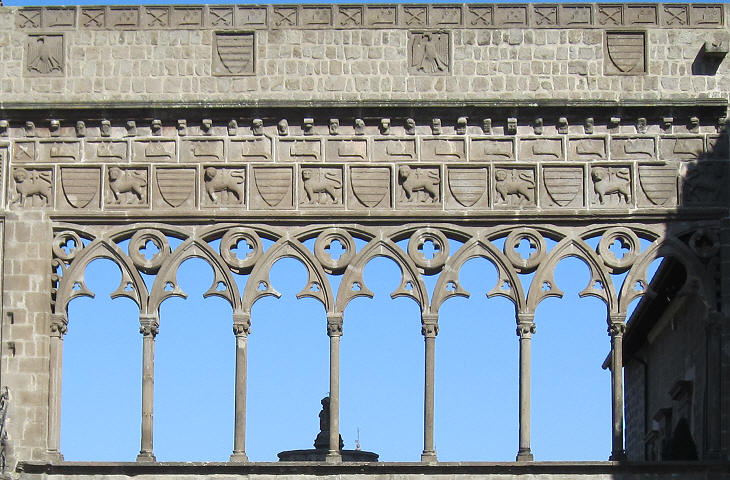 Loggia delle Benedizioni: the decoration is based on symbols of the pope (keys and mitres), of the emperor (eagle) and the coats of arms of Viterbo (lion) and of the Gatti family (stripes) who promoted the construction of the loggia

Other conclaves were held in Viterbo, but because in 1281 the inhabitants of the town badly reacted to the election of Pope Martin IV, an election manoeuvred by King Charles of Anjou, the town was excommunicated and for almost a century not one pope visited it. 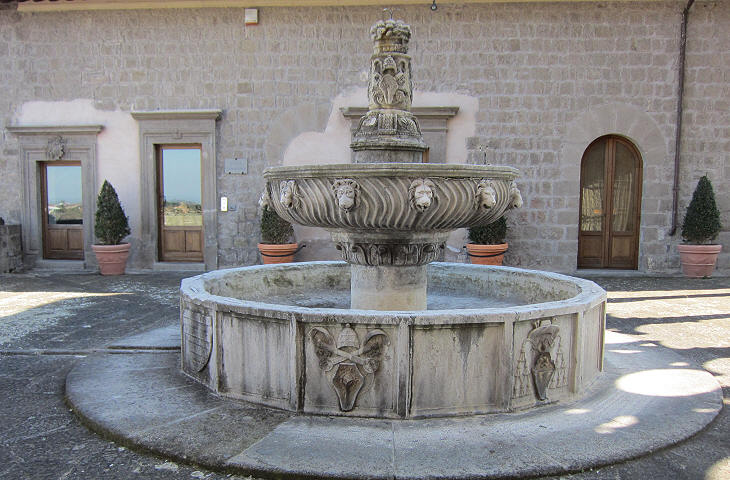 Fountain of the Loggia

The loggia from which the popes blessed the crowds or made their most important statements (including excommunications) was covered, but the roof and the opposite side of the loggia collapsed in the second half of the XIVth century; the elegant fountain was added towards the end of the XVth century by Cardinal Raffele Riario, nephew of Pope Sixtus IV and who is best known for having built Palazzo della Cancelleria in Rome; the fountain was built with parts of a previous fountain; the upper basin has a decoration based on S-shaped parallel grooves (strigiles) which is typical of Roman sarcophagi. 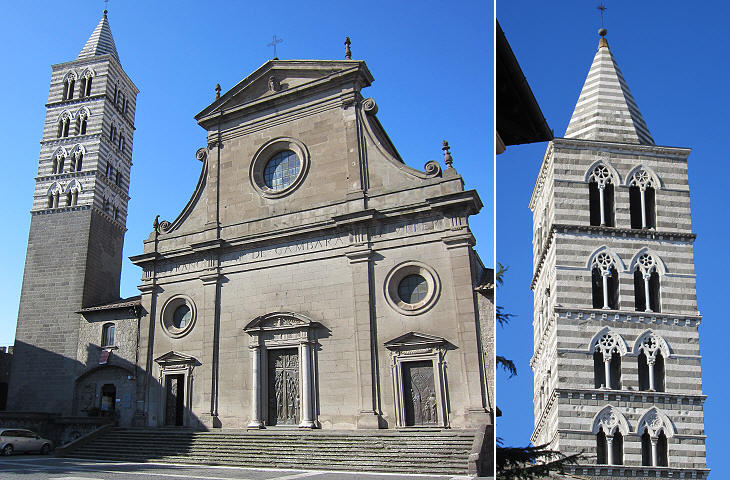 The cathedral was built by Lombard masons who established themselves in Viterbo, but the bell tower stripes show the influence of monuments in Siena and Orvieto; it was built in the XIVth century and the pyramidal top was added at a later time. 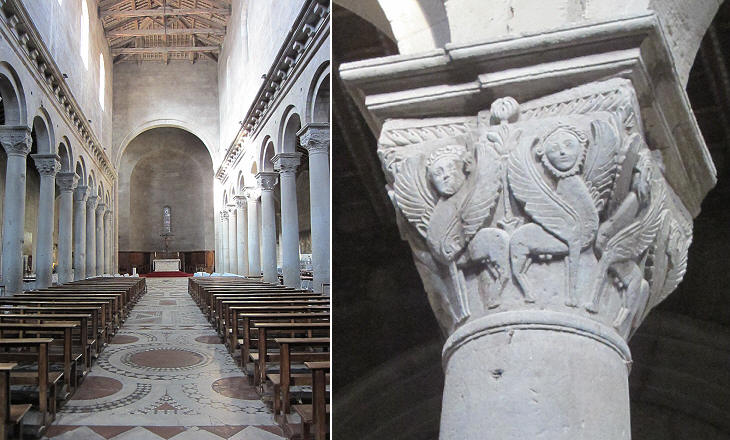 Viterbo was heavily bombed during WWII and its historical monuments, including the rear part of the cathedral, were greatly damaged; the restoration of the interior has taken away most of the Renaissance and baroque additions; it has now a bare aspect apart from the fine Cosmati floor and the elaborate medieval capitals. 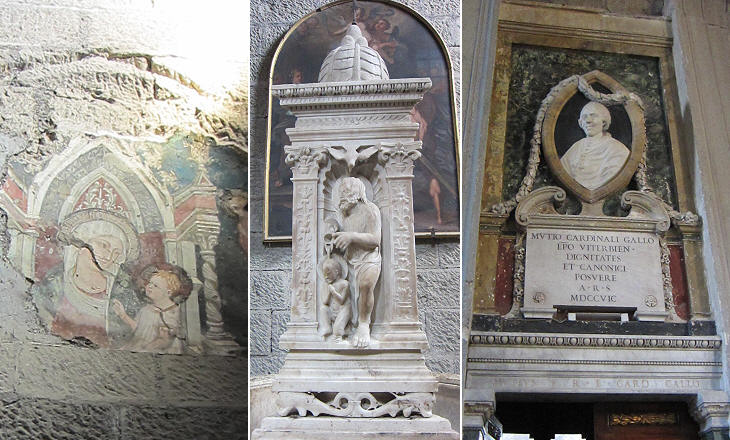 The side naves were less damaged than the central one and they retain some of the works of art which decorated them; a collateral positive effect of the bombing was the discovery of some old frescoes.