You may wish to see a map of the region and a short introduction to this section or a page on the town of Bagnaia first. Cardinal Raffaele Riario, a relative of Pope Sixtus IV who was Bishop of Viterbo in 1498-1506, bought a wood on the slope of Monte Cimino outside Bagnaia and populated it with game to go hunting there with his guests; at that time hunting was regarded as a pastime which was suitable for cardinals and popes; at Castello della Magliana in the outskirts of Rome the popes had a hunting lodge which was built by Girolamo Riario, a relative of the Cardinal.
In 1517 Cardinal Riario was charged with being involved in a plot to kill Pope Leo X; he was eventually acquitted, but his properties were confiscated and he went to live in Naples. 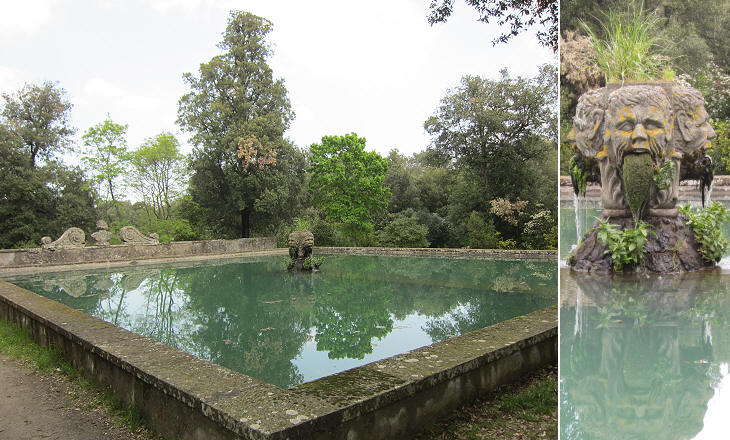 (left) "Il Conservone", a storage tank at the top of the hill behind the Italian garden; (right) detail of its decoration

Cardinal Niccolò Ridolfi was a nephew of Pope Leo X who was Governor of Viterbo in 1532-1548; he started to turn the hunting ground into a park by building an aqueduct which carried water to the highest point of the wood. 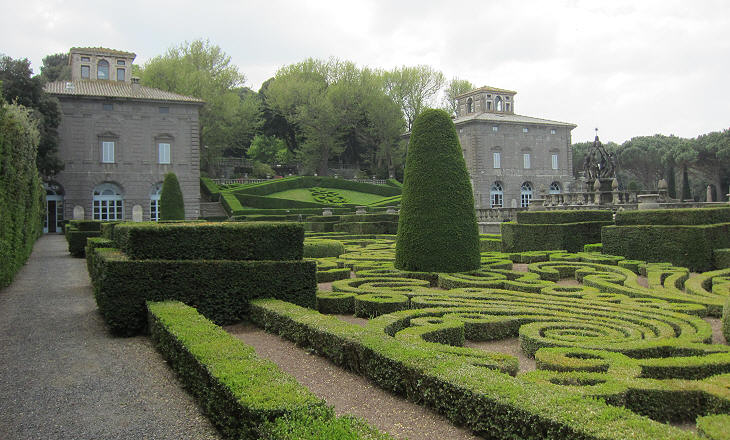 A steep street leads up to the iron gate of the later villa, which admits one to a glorious garden, designed by Vignola at the same time with the villa itself.
Augustus J. C. Hare - Days near Rome - 1875
Cardinal Gian Francesco Gambara, was bishop of Viterbo in 1566-76; he had family bonds with the Farnese and with Cardinal Carlo Borromeo; on behalf of the Farnese he supervised the construction of their countryside palace at Caprarola which was completed by il Vignola; it is thought that Cardinal Gambara asked il Vignola to design his villa at Bagnaia. View of the lowest terrace with Fontana del Quadrato

It is a perfect paradise. In the centre of the clipped box-walks is a large fountain with most beautiful Florentine figures - and beyond it a silvery cascade glitters and dances down through the green depths from a series of fern-fringed grottoes. Hare
The Farnese property at Caprarola was characterized by an imposing palace, whereas at Bagnaia the focus was placed on the design of the gardens, probably because Cardinal Gambara was influenced by the general admiration for the villa Cardinal Ippolito d'Este was in the process of completing at Tivoli and which featured a variety of fountains. 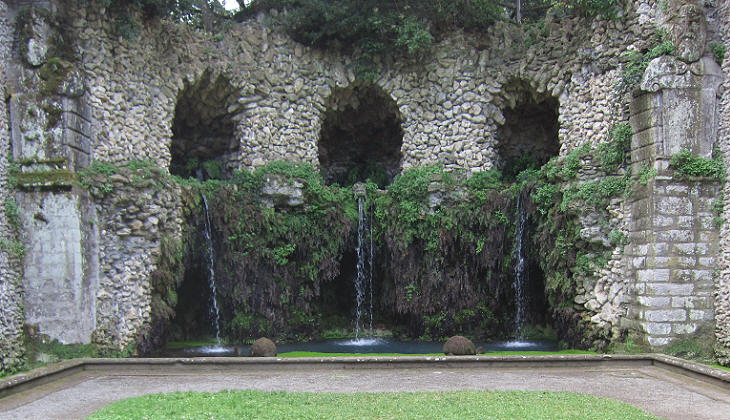 Nymphaeum at the top of the gardens

The entrance to the gardens of Villa Lante is placed at their lowest level, but it is more meaningful to start the visit from the top of the hill. The design of Renaissance gardens is all about the relationship between Nature and Mankind and how the latter is able to control the former; for this reason water makes its first appearance in an apparently natural environment with caves and waterfalls. 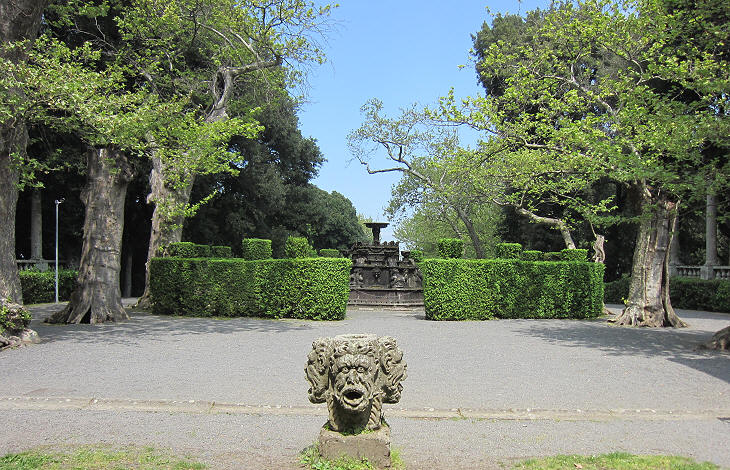 The series of fountains which bring the water to the lowest terrace are all arranged symmetrically along an axis; the section of the terrace with neatly cut box hedges is initially very narrow; its size increases at each terrace. (left) Loggia on the highest terrace; (right) detail of its decoration

It is known that in the 1540s il Vignola met in France Sebastiano Serlio, an Italian architect who is best known for his treatise on architecture and who has given his name to Serliana, a window with three openings which was also used for loggias. Two identical small loggias on the highest terrace provided the cardinal's guests with a resting place where they could engage in conversation or listen to the murmur of water; it was not just a matter of relaxing, but a means to re-enact the way of living of the Classical World. 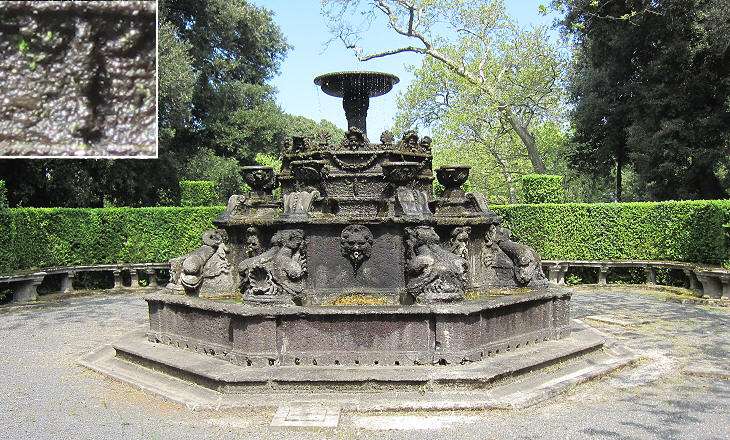 The fountains were built with peperino, a volcanic stone which tends to darken when wet; the design of Fontana dei Delfini reflects the fashion of the time for a very rich decoration in an elaborate and symmetrical frame. (left) Fontana degli Appennini; (right) detail showing the shrimp at the end of the fountain

Cardinal Gambara and his friends were familiar with the poems of Virgil and Horace which chanted the murmur of brooks, but in the overall metaphorical context of the gardens the brook was contained by very elaborate banks. The shrimp which appears in the coat of arms of the cardinal and in many fountains is a reference to the cardinal's surname; in It. gambero means shrimp. 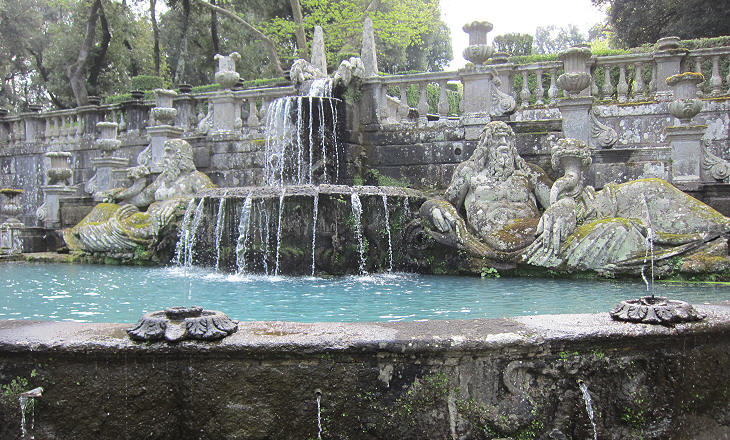 The brook becomes a large river in the next terrace and the two large statues which are known as the giants are actually personification of rivers; they are rather poor sculptures, but their design was inspired by those which Michelangelo placed in Piazza del Campidoglio a few years earlier. 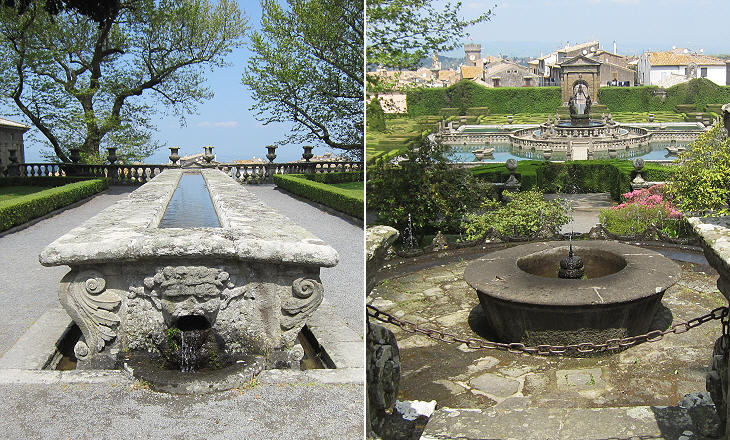 The variety of fountains shows the engineering skills of those who designed them; there were some hidden fountains which "showered" the unfortunate guest who inadvertently triggered a mechanism. 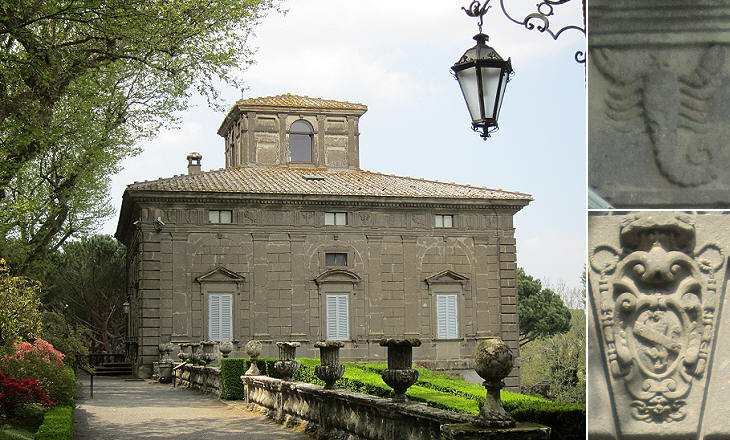 On either side stand the buildings of the villa, one for the family, the other for the guests. Hare
Only one of the two identical small buildings (in It. casino) of the villa was completed by Cardinal Gambara, probably because he was advised by Cardinal Carlo Borromeo, that more expenditure on the villa could lead to criticism of his lifestyle.
The second casino was built by Cardinal Alessandro Peretti Montalto, a relative of Pope Sixtus V. 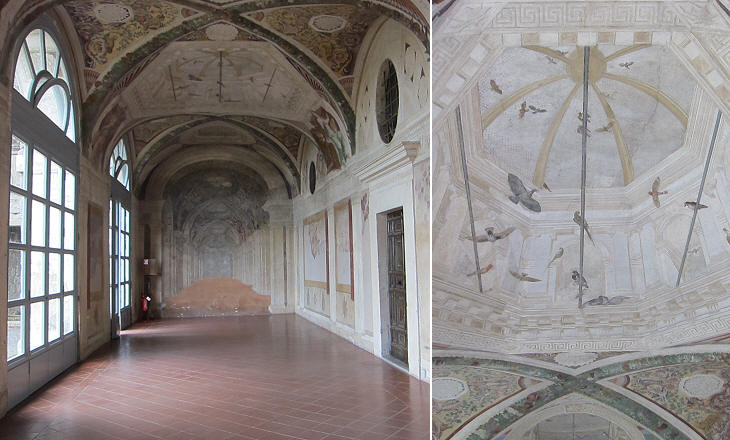 Notwithstanding the fact that the two casinos are rather small, their ground floor is almost entirely occupied by a loggia; the decoration is typical of that period and it is characterized by illusionistic effects which make the loggia a transition between the building and the gardens. You may wish to see the painted aviaries at Villa Medici and at Villa Giulia in Rome. 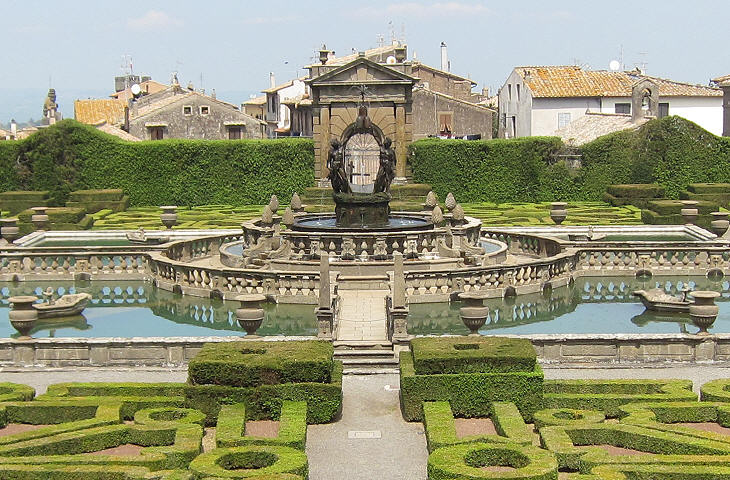 The lowest (and largest) terrace houses a monumental fountain which is called Fontana del Quadrato (Square Fountain) because of its shape; it was probably meant to represent a calm sea, into which the brook/river emptied (there are boats in its four sections). The probable significance of the fountain was modified by Cardinal Alessandro Montalto who added the central group, a glorification of his family's heraldic symbols. 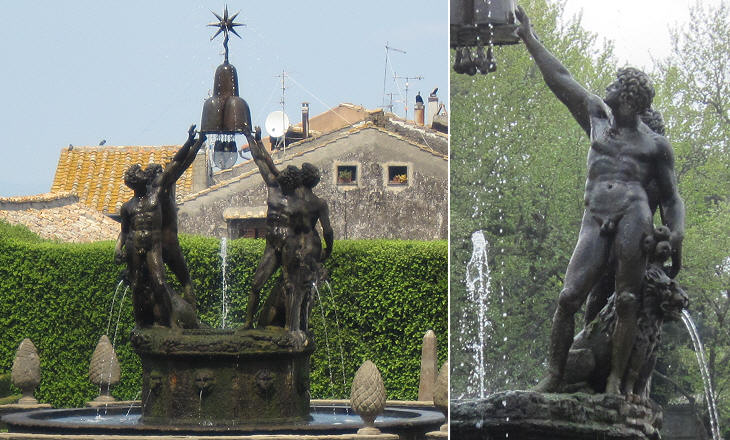 The current name of the fountain is due to the fact that the peperino stone has blackened considerably to the point that one has the impression that the statues are made of bronze; they are attributed to Taddeo Landini, because of similarities with Fontana delle Tartarughe in Rome. 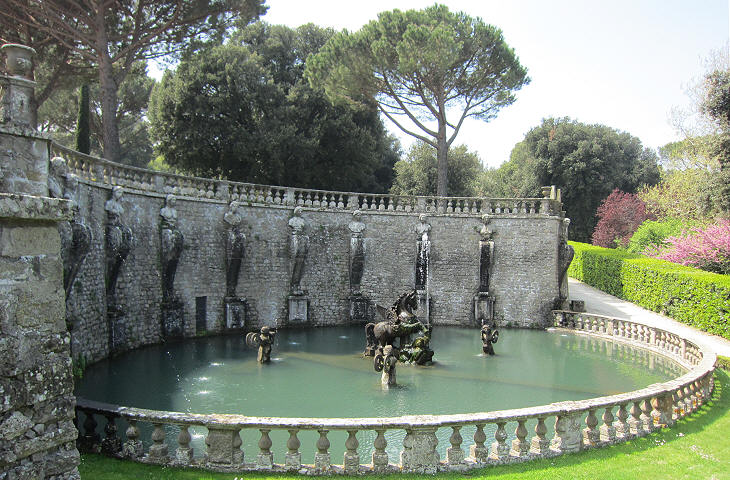 Some of the cardinals of the XVIth century were more acquainted with the Greek Myth than with Theology; as a matter of fact Villa Lante, even in the decoration of the apartments, has very few religious references; this large fountain which is outside the Italian garden represents Pegasus and the Muses (the busts on the wall) and makes reference to the fact that the winged horse struck the earth with his hoof and a spring burst forth; this occurred on Mount Helicon, the residence of the Muses. 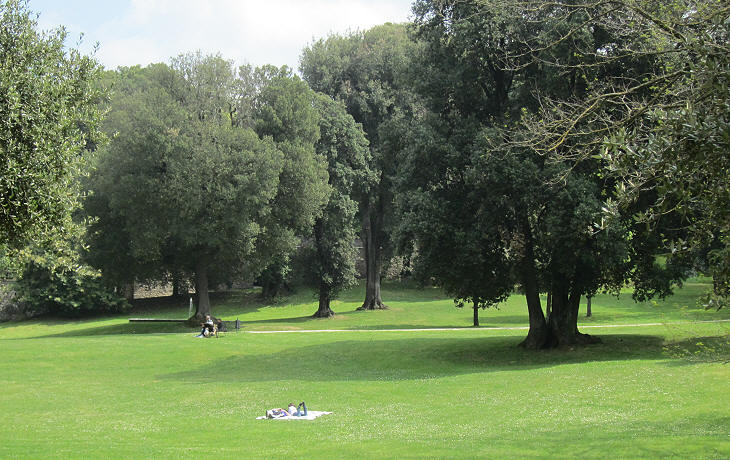 View of the wood section

Beyond the villa the walks are of indescribable beauty: gigantic plane-trees; terraces, where crystal water is ever sparkling through grey stone channels; mossy grottoes overhung with evergreens; woods of ancient ilexes, which have never known the axe, and which cast the deepest shade in the hottest summer weather. Hare
The Italian garden section of Villa Lante occupied a minor portion of the overall estate, which continued to include a wooded area used for hunting; this occurred also in some Medici villas in Tuscany and Bagnaia is close to that region. 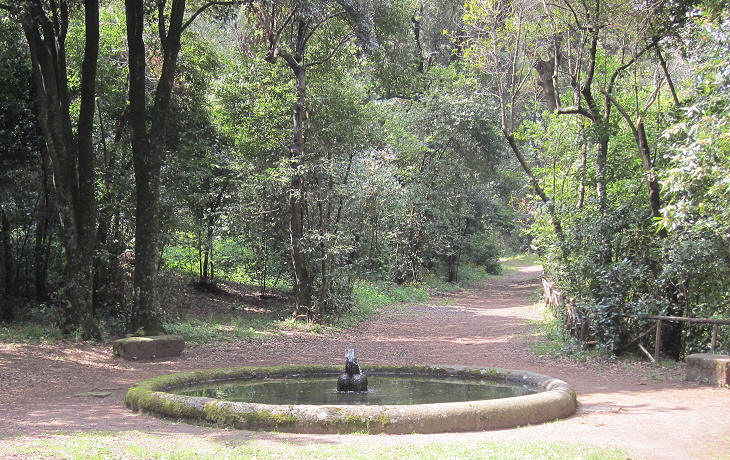 A small fountain in the wood section

In 1656 the villa was bought by Ippolito Lante Della Rovere, Duke of Bomarzo, together with the palace in town; the Lante retained possession of the villa until 1933. Wood section of the villa

Return to page one - the town