Perhaps in 1761 Giuseppe Vasi chose Villa Pamphilj or del Bel Respiro as the closing etching for the last of his ten books on the Magnificenze di Roma Antica e Moderna because it was a mix of of modern and old owing to the many ancient statues and reliefs which were displayed on the main building and in the gardens.
Bel Respiro means deep breath; today this name is no longer used and the villa is known as Doria Pamphilj, but Bel Respiro was (and is) a very appropriate name; the elevation of the ground, the size of the gardens, the many stone pine trees and the exposure to ponentino, the evening western breeze which mitigates the summer heat, all contribute to making breathing in deeply very enjoyable.
The view is taken from the green dot in the small 1688 map by Simone Felice Delino here below. In the description below the plate Vasi made reference to: 1) Lower level of Villa Pamphilj; 2) Steps leading to the secret garden; 3) Steps leading to the upper level of the villa; 4) Pinetum (plantation of stone pine trees). The small map shows also: 5) Casino dell'Algardi; 6) Teatro; 7) Villa Vecchia; 8) Giardino dei Melangoli and Fontana della Lumaca; 9) Fontana del Giglio; 10) Arco dell'Acqua Paola. Apparently Vasi took his view from an elevated position to the east of the casino; as a matter of fact in this assumed location there is a depression and one has to move to Arco dei Quattro Venti in former Villa Corsini to catch a glimpse of the casino from the east. Vasi most simply updated an etching by Felice Delino (it opens in another window). Similar to Vasi, Felice Delino (1655-697) was an architect who was not given many opportunities to show his talent, apart from Palazzo Panizza. He earned his living by designing ephemeral buildings for ceremonies and parties and by engraving views of fountains and villas. 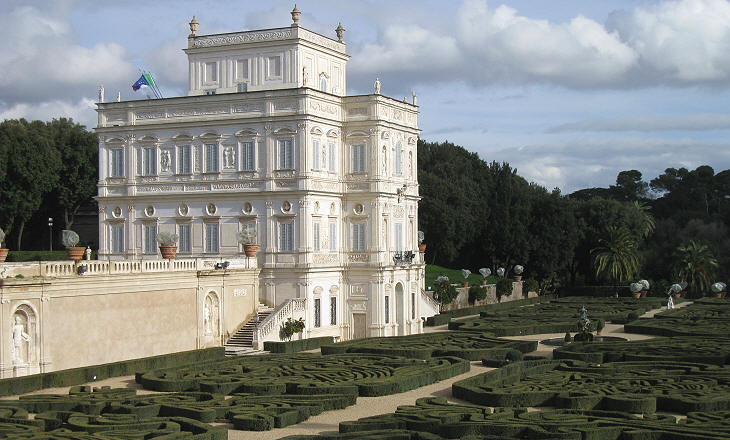 Casino dell'Algardi and the secret (private) garden seen from the west 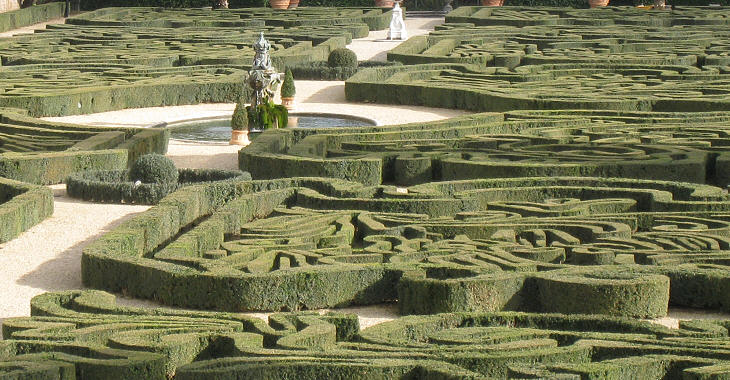 Detail of the secret garden with a parterre of embroidery

The garden, for which especial permission must be obtained, is full of beautiful azaleas and camellias.
Augustus J. C. Hare - Walks in Rome - 1875. 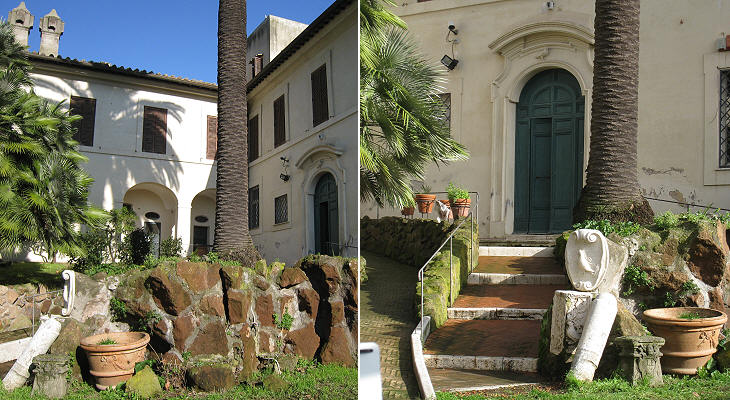 The Pamphilj were a Roman family of minor importance until Giovanni Battista Pamphilj was appointed cardinal in 1629; in 1630 his brother Pamphilio bought a vigna (a farm) along Via Aurelia, outside Porta S. Pancrazio. Its main building was modified and embellished, but it retains the size and design of a rather modest countryside residence. The image used as background for this page shows a stucco relief in the ceiling of a hall of this building; it portrays a dove, the heraldic symbol of the Pamphilj. 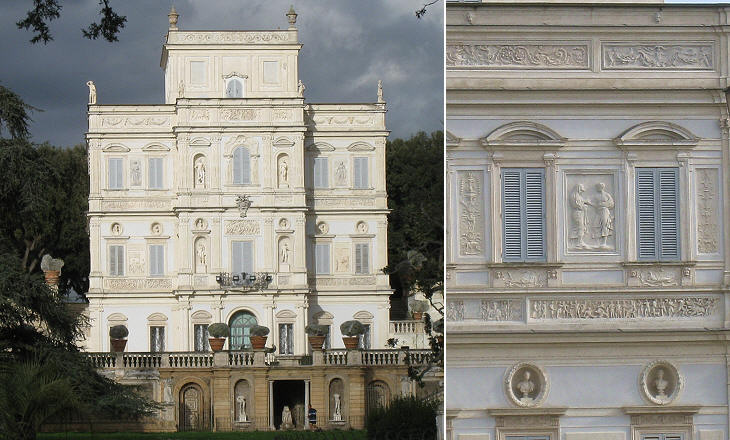 (left) View from the south: (right) detail of the western side

In 1644 Cardinal Pamphilj was elected Pope Innocent X and he almost immediately appointed cardinal his nephew Camillo, son of Pamphilio, and gave him a major role in state affairs.
Camillo asked Francesco Borromini to develop a project for a new casino. The architect suggested a combination between a small fortress and an astronomical observatory, but Camillo had different views and turned to Girolamo and Carlo Rainaldi for a more conventional design. Perhaps the north-south orientation of the casino and its vertical development are a heritage of Borromini's project. 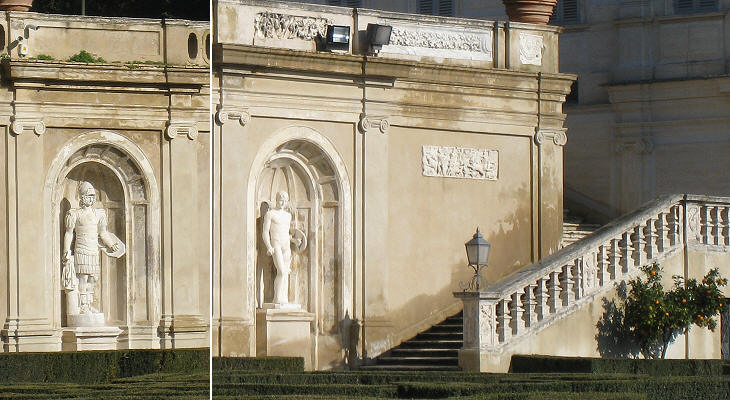 The Rainaldi designed a central building with two wings which would have embraced the secret garden, but Camillo Pamphilj was not yet satisfied; he was no longer cardinal and he had married Olimpia Aldobrandini, the last of the family of Pope Clement VIII. He and his wife possessed a large collection of ancient statues and reliefs some of which were found in a necropolis inside Villa Pamphilj (see page two); Camillo was mainly interested in displaying his collection inside and outside the new casino, similar to what Cardinal Ferdinando de' Medici and Cardinal Scipione Borghese had done in their villas. He therefore sought the advice of Alessandro Algardi, who was not an architect, but a talented sculptor and in particular a very expert restorer (and imitator) of ancient sculptures. Algardi was assisted by Giovan Francesco Grimaldi, a landscape painter; they both came from Bologna and were part of the so-called classical school which preached a composed design; they were influenced also by the landscape paintings by Nicolas Poussin, Gaspard Dughet and Claude Lorrain who all worked in Rome during the first half of the XVIIth century. Unlike Villa d'Este, the first modern Roman villa, the Casino is not placed on high ground at the end of a long series of formal gardens, but it is best seen in the context of an almost natural landscape.

Detail of the façade before (left) and after (right) being repainted

The building was recently repainted in the "sky" colour which was very common in the XVIIIth century (you may wish to learn more about this topic). 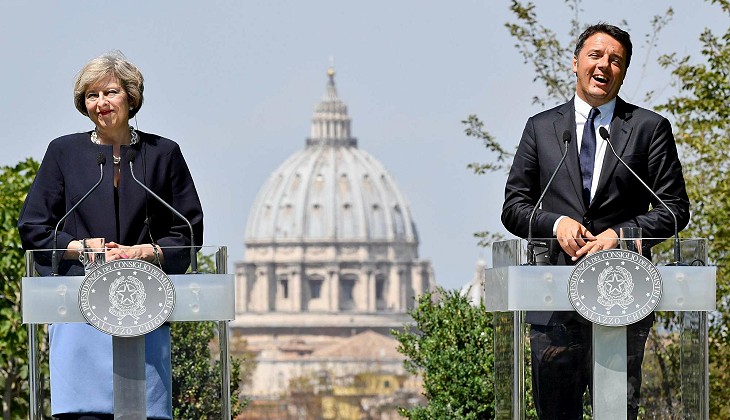 Official meeting at Casino dell'Algardi between Mrs. Theresa May and Mr. Matteo Renzi on July 27, 2016

Villa Doria Pamphilj was acquired by the Italian Government and by the City of Rome during the 1950/960s. The park is open to the public, while Casino dell'Algardi and the secret garden are used by Government for official meetings or for hosting guests. In 2009 Mr. Gaddafi was allowed to place his tent near the casino (it opens in another window). 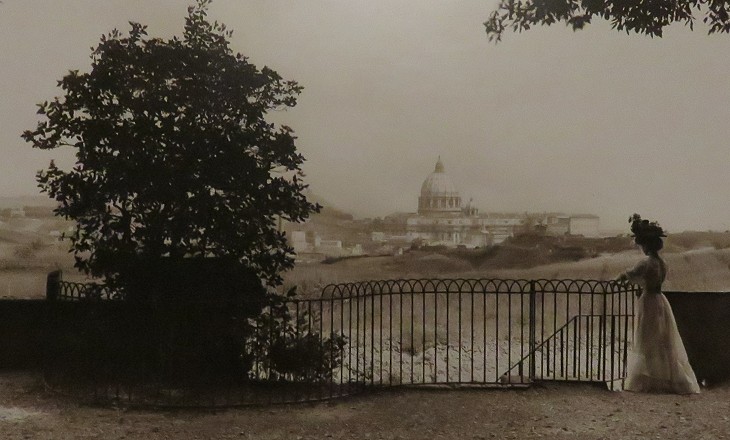 A view of S. Pietro from Villa Pamphilj (ca 1890) - detail from an Alinari photograph in my living room

I went to the Villa Pamfilia, new Villa but its seated very high, and from the terress upon the top of the House you have a fine Prospect. There are divers good Pictures and Statues in the house, and fine Water-works, and a Grotta in the Garden.
Richard Lassels' The Voyage of Italy, or a Compleat Journey through Italy in ca 1668
From the ilex-fringed terrace in front of the casino is one of the best views of St. Peter's, which is here seen without the town, backed by the Campagna.
Augustus J. C. Hare - Walks in Rome - 1875

Algardi designed several fountains for the entertainment of the landlords and their guests in a large terrace to the south of the secret garden; some of them had scherzi d'acqua (unexpected spouts of water) and hydraulic organs and were decorated with statues and reliefs. The fountains were often placed in grottoes, artificial caves adorned with shells. In the XVIIIth century the Pamphilj relocated the finest works of art of the villa to their enlarged palace in Via del Corso. The Venus after which the fountain shown above was named, stood on a shell carried by dolphins. 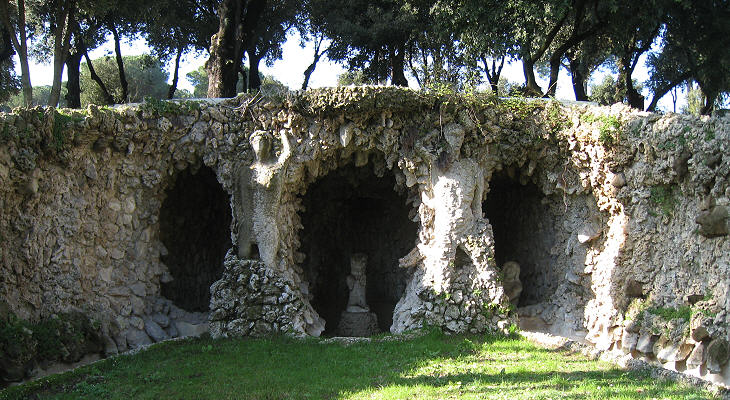 The grounds of this villa are laid out in gardens, alleys, terraces and plantations, interspersed with fountains and cascades in the fantastic style of the last century; and an organ worked by water is another relic of a taste now happily superseded by our improved system of landscape gardening.
Rev. Jeremiah Donovan - Rome Ancient and Modern - 1843.
The fountains designed by Algardi and his assistants were modified in the following centuries for several reasons such as changes in taste, cost of maintenance and war events. The grotto shown above is only the lower level of a larger fountain; from an engraving by Giovanni Francesco Venturini (it opens in another window) we know that there was a second grotto above this one and behind it there was a semicircular wall with statues on its top. 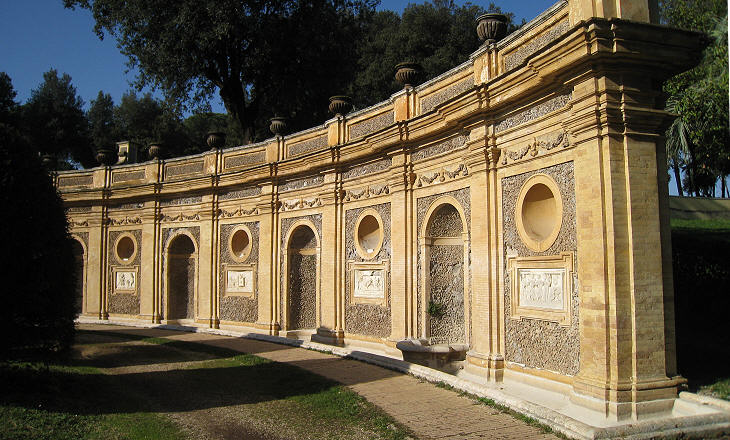 Some of the major villas had an open air theatre (a fine example can be seen in the plate showing Villa Mattei); Algardi designed a theatre which was not entirely completed and in addition it was damaged during the 1849 Defence of Rome (see page two), so that only a part of it has survived to the present day. Algardi's "theatre" is actually the decorated wall which stood behind the stage in a Roman theatre. 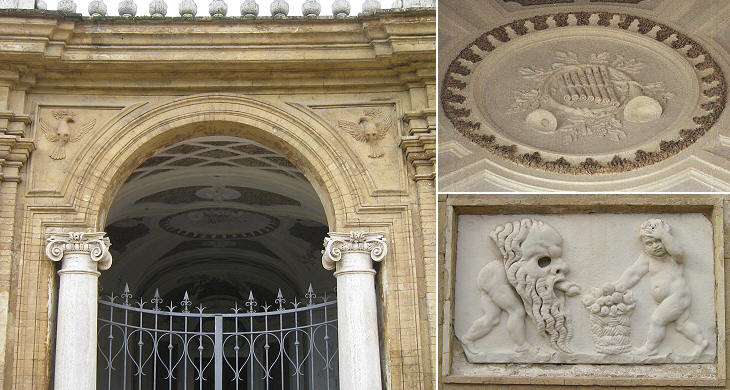 Details of the theatre

The decoration of the theatre was very light-hearted; Algardi chose some ancient reliefs portraying children making jokes (you may wish to see similar reliefs in a sarcophagus at Porto and a statue of Collezione Albani having the same subject) and he added some he made himself. Another theme of the decoration was pastoral life in Arcadia, a region of Peloponnese which was seen as an idealized rustic paradise; in 1758 century a statue of Pan and a water organ were placed in the grotto at the centre of the theatre. Pan was the god of shepherds and rustic music and a panpipe (or syrinx) decorated the ceiling of the grotto.

Usually the Pamphilj had a predilection for the dove, but in this villa they preferred to give more emphasis to the fleur-de-lis, their other heraldic symbol. 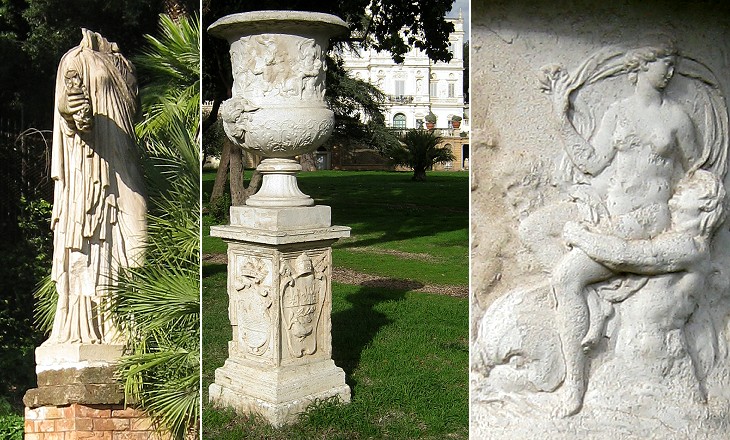 (left) An ancient statue; (centre) an old vase; (right) detail of its decoration

In addition to the statues and reliefs with which Algardi decorated the casino and the fountains, other ancient works of art were placed here and there along the alleys and in the gardens. Most of them have been replaced by copies. 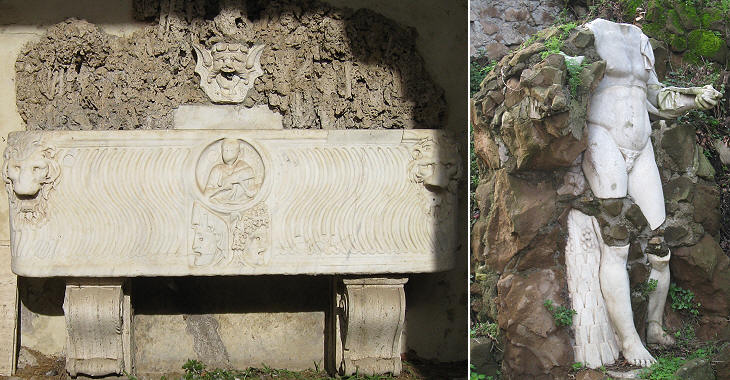 (left) An ancient sarcophagus; (right) fragments of an ancient statue

Nature and art was a combined category which attracted XVIIth century artists; its origin can perhaps be found in some unfinished statues by Michelangelo. Fontana di Trevi is a typical example of this mix, which can be noticed also at Villa Pamphilj. 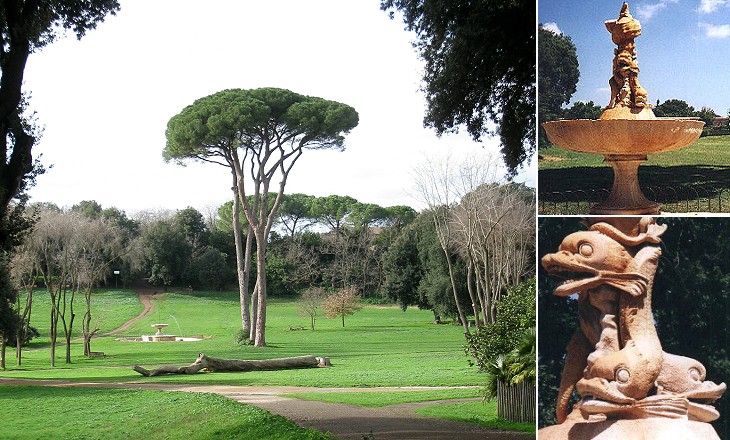 The ancient Roman mansions had courtyards surrounded by colonnaded porticoes and having at their centre a fountain; hortus conclusus is the medieval adaptation of this design which was used for cloisters; they were divided into quadrants where orchards were grown. Giardino dei Melangoli was a Renaissance evolution of hortus conclusus and the quadrants were planted with melangoli, sour citrus trees; in the small map (8) shows the location of this garden; at its centre the Pamphilj placed a fountain designed by Gian Lorenzo Bernini. The citrus trees were uprooted in the late XVIIIth century in favour of a more "natural" landscape (you may wish to see those at Villa Borghese). 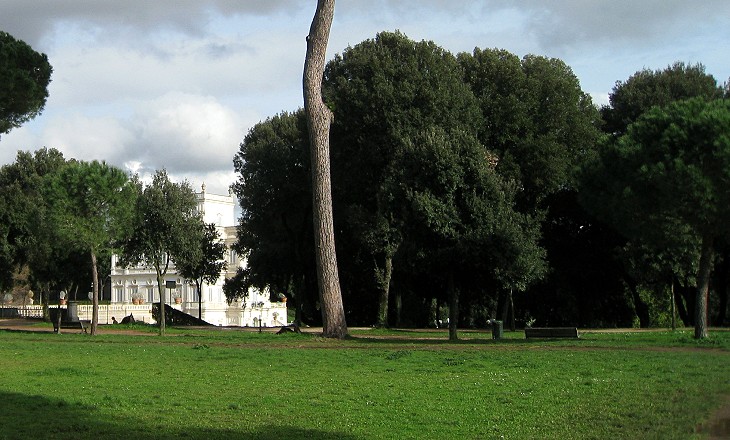 A view of the gardens near Casino dell'Algardi

Under a sunshine, if anything rather too warm, we proceeded to the Villa Pamphili, whose beautiful gardens are much resorted to for amusement; and there we remained till evening. A large flat meadow, enclosed by long ever green oaks and lofty pines, was sown all over with daisies, which turned their heads to the sun.
J. W. Goethe - Italian Journey - December 2, 1786 - translation by Charles Nisbeth.
How I wish you were here: how you would enjoy (..) the extreme loveliness of the spring, with its Judas and May flowers, and the golden broom of the Campagna. I have just been, with my old friends Mrs. Ramsay and Miss Garden, to the Villa Doria to pick anemones. There were thousands of them, and the ladies gathered them in like a harvest. Their servant was told off to look after the violets.
Augustus J. C. Hare - The Story of My Life - 1900
Off on the grass at one side some Ursuline nuns were sitting with their pupils, laughing and talking, and one nun was playing ball with the smaller girls, and mingling with their shouts her own joy, innocent cries of joy as she romped among them. Nothing could have been prettier, sweeter, or better suited to the place; all was very simple, and apparently the whole place was hospitably free to the poor women who ranged over it, digging chicory for salad out of the meadows. The daisies were thick as white clover, and the harsh purple of the anemones showed everywhere.
Read more of William Dean Howells' account of his visit to this villa in 1908 and learn about the difficulties the Doria Pamphilj had in properly maintaining their property.