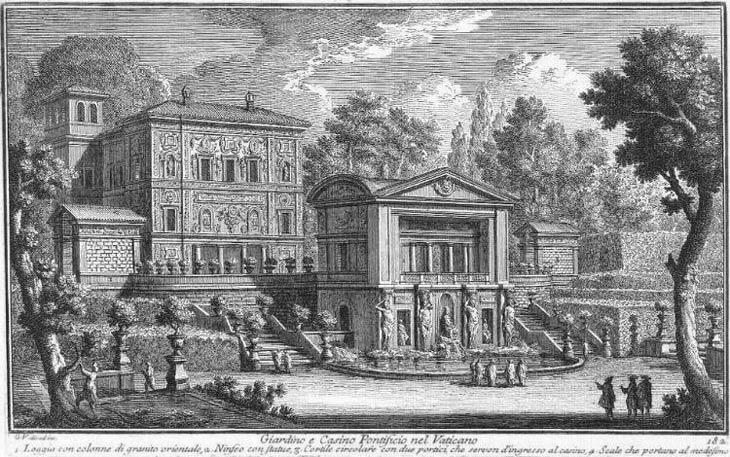 This 1761 etching by Giuseppe Vasi is an interesting record of the changes made by Pope Clement XIII to the surroundings and accesses to the small casino designed by Pirro Ligorio for Pope Pius IV in 1561. The section of the 1748 Map of Rome by Giovanni Battista Nolli (below) shows that there was little room between the fountain of the casino and nearby Giardino dei Semplici, a garden where officinal (medicinal) plants were grown which was created by Michele Mercati, physician of Pope Pius V. The view by Vasi shows instead a large open space and two stairs decorated with pots of orange trees which did not appear on the map; also the shape of the basin is different. One of the persons near the fountain wears a round hat (a saturno - it opens in another window), rather than a tricorne; possibly Vasi portrayed the Pope himself while checking the result of the changes he commissioned (see also a plate showing the gardens of Palazzo del Quirinale).
The view is taken from the green dot in Nolli's map. In the description below the plate Vasi made reference to: 1) Loggia with Egyptian granite columns; 2) Nymphaeum (fountain) with statues; 3) Circular courtyard with two entrances; 4) Steps leading to the courtyard. The second map shows also 5) approximate site of Pinacoteca Vaticana. 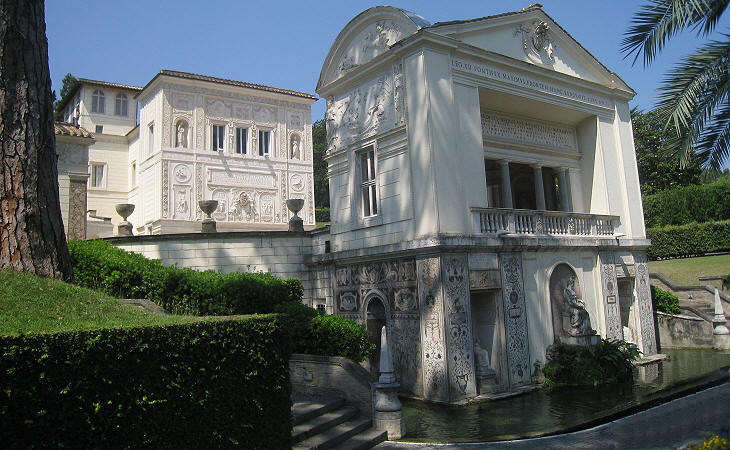 The main noticeable change relates to four stucco statues portraying satyrs supporting the loggia which do not exist any longer; other changes relate to two small obelisks which have been added at the beginning of the stairs and to the disappearance of the pots with orange trees. 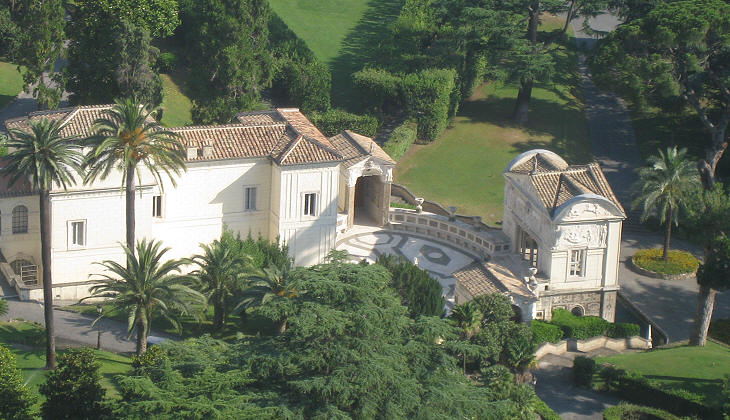 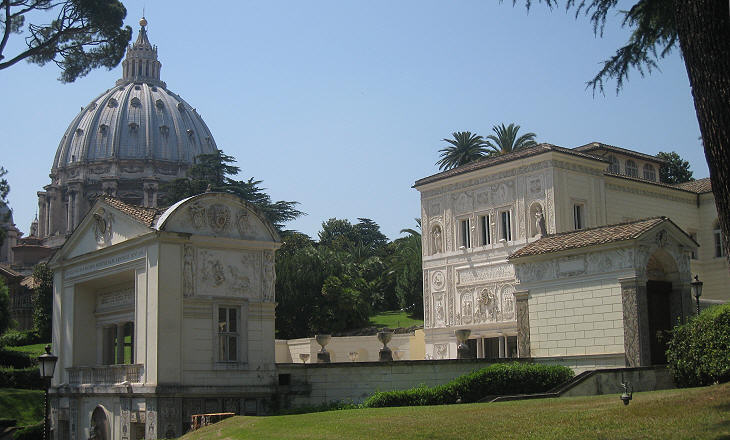 ... and the dome seen from near the casino

The image taken from the dome of S. Pietro and Vasi's plate highlight a feature of the casino: it was immersed in a natural context, but at the same time it was separated from it; the oval courtyard was limited by a wall which, while not completely precluding the view of the wood surrounding the casino, marked a sort of border between the work of Nature and that of Man.
The wall did not hide the dome of S. Pietro, a nightmare for Pope Pius IV; at the death of Michelangelo in 1564 only the drum was completed; the great architect had left a detailed model showing how the construction should be carried forward, but many members of the papal court doubted about the feasibility of the project; for more than twenty years the unfinished dome loomed over the casino similar to an ancient ruin; this until 1590 when Giacomo della Porta in just 22 months gave modern Rome its most popular symbol: er Cupolone (the large dome). 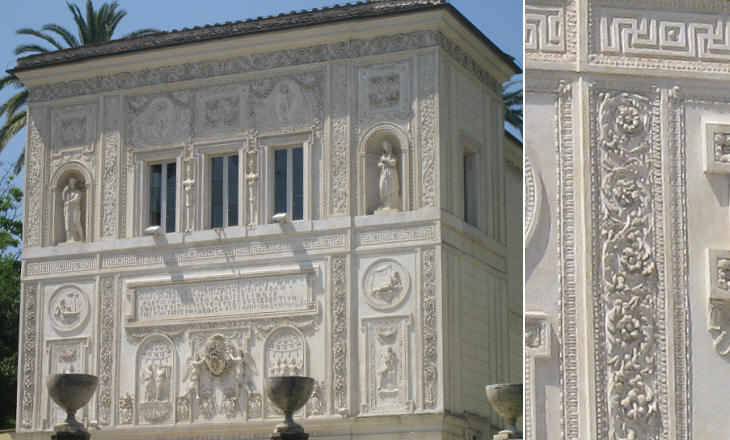 (left) The main building; (right) detail of its decoration

The Casino del Papa, or Villa Pia, built by Pius IV. in the lower and more cultivated portion of the gardens, is the chef-d'oeuvre of the architect, Pirro Ligorio.
Augustus J.C. Hare - Walks in Rome
The idea of building a small casino on the first slopes of the Vatican hill came to Pope Paul IV, who disliked nearby Casino di Belvedere, notwithstanding its commanding position, probably because it housed too many ancient sculptures which he regarded as symbols of the pagan world; his lifestyle was very austere and he wanted a small place where he could meditate; the construction of the casino started in 1558, but its initial design was radically changed by Pope Pius IV, his successor. He was a fervent believer, but at the same time a man of great erudition which in those years meant being imbibed with classical culture. Pirro Ligorio, the architect in charge of the construction, was also a scholar of antiquities; he carried out early excavations at Villa Adriana and he designed nearby Villa d'Este. The two figured out a very elaborate decoration for the casino which influenced those of later buildings, e.g. Villa Medici and Villa Borghese. 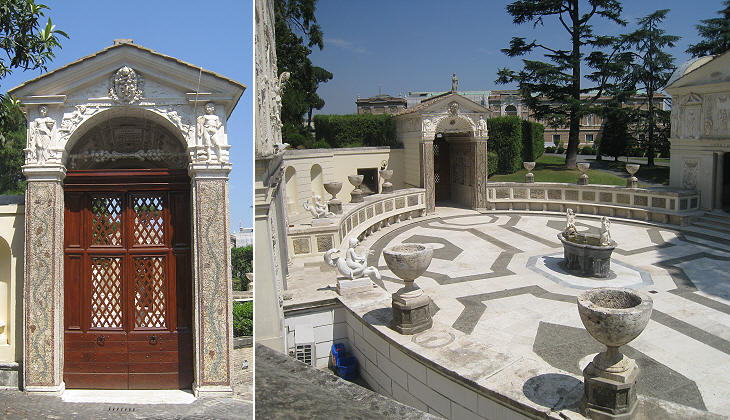 (left) One of the side entrances; (right) oval courtyard and Pinacoteca Vaticana in the background; one of the putti riding a marine creature is shown in the image used as background for this page

Pope Pius IV wanted to transmit Christian concepts through symbols taken from the ancient world. He died in 1565. In 1577 Cardinal Carlo Borromeo, a nephew of the Pope, issued guidelines on the construction and decoration of churches and religious buildings. These stressed the importance of conveying Christian concepts through the depiction of events of the Holy Scriptures and of martyrdoms. The sophisticated approach followed by Pope Pius IV was abandoned. For this reason many of the reliefs and statues which decorate the casino do not seem to have a religious meaning, although this was what the Pope had in mind. 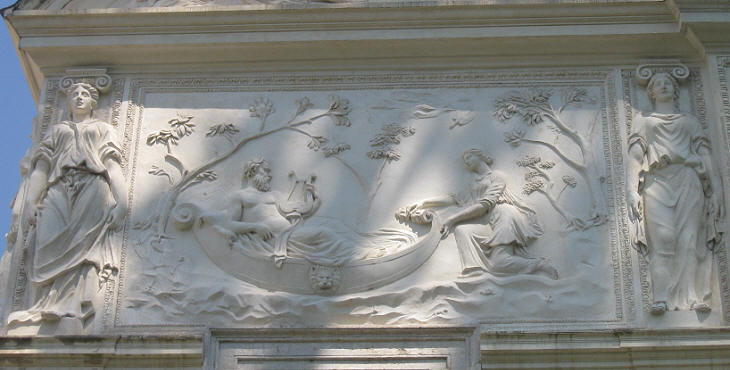 A reference to water is a prevailing theme in the decoration of the casino: seas, rivers, boats, fish and other marine creatures are portrayed in stucco reliefs and statues; the Ocean, springs and Water as one of the Four Elements had meanings which were absorbed into the early Christian tradition and which Pope Pius IV and Pirro Ligorio wanted to revive.
Eos, Goddess of Dawn, asked Zeus to make Tithonus, a handsome Trojan prince, immortal, but she forgot to ask that he be granted eternal youth. Tithonus indeed lived forever, but begging for death. Most likely the Pope chose this tale to indicate that men should seek eternal life and accept the end of their earthly life.
Here the Pope assembled around him all those who were distinguished by their virtue or talents, and held many of the meetings which received the name of Notti Vaticane - at first employed in the pursuit of philosophy and poetry, but - after the necessity of Church reform became apparent both to the pope and to S. Carlo - entirely devoted to the discussion of sacred subjects. Hare

Details of the mosaics embellishing the nymphaeum

The shell decorations are pretty and curious. Hare
With the move of the papal residence to Palazzo del Quirinale the casino lost importance and this helped its preservation because the successors of Pope Pius IV did not modify the original building and its decoration in a significant way.
You may wish to have a stroll in the Vatican Gardens. 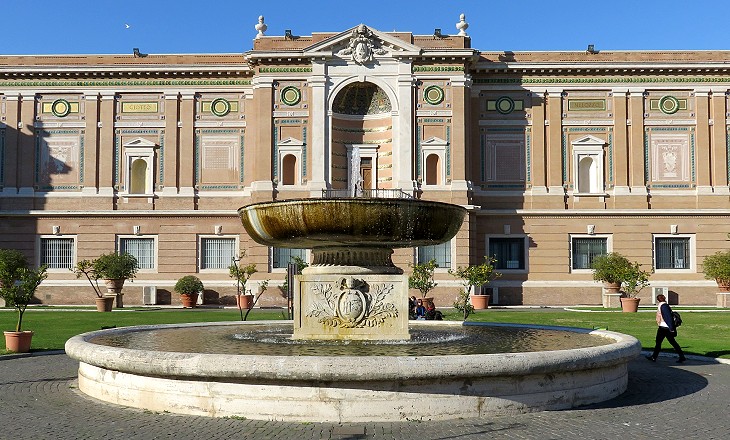 In 1932 a new building designed by Luca Beltrami was inaugurated by Pope Pius XI in the northern section of the gardens near the new entrance to Musei Vaticani. Its purpose was to house the papal collection of paintings which was founded by Pope Pius VII. It mainly consisted of altarpieces which had been seized by the French, e.g. The Transfiguration by Raphael from S. Pietro in Montorio. The collection was greatly increased by adding to it works of art from churches and monasteries which were closed or demolished after 1870, e.g. a painting by Andrea Sacchi from S. Romualdo (it opens in another window).