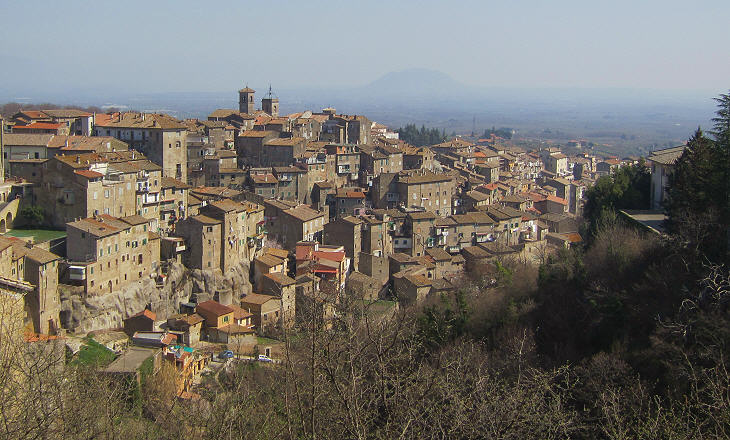 View of Caprarola (left) and of the terrace where S. Teresa stands (right); in the background Monte Soratte

A rough stony road enough descends abruptly through chestnut woods, and then through deep clefts cut in the tufa and overhung by shrubs and flowers, every winding a picture, till we arrive at Caprarola. Why do not more people come here? it is so very easy. As we emerge from our rocky way the wonderful position of the place bursts upon us at once. The grand, tremendous palace stands backed by chestnut woods, which fade into rocky hills, and it looks down from a high-terraced platform upon the little golden-roofed town beneath, and then out upon the whole glorious rainbow-tinted view, in which, as everywhere we have been, lion-like Soracte, couching over the plain, is the most conspicuous feature.
Augustus J. C. Hare - Days near Rome - 1875
Caprarola is located on a hill protected by a deep ravine and in a commanding position over the Tiber valley. There are no records of the town during the Etruscan and Roman periods when the area was covered by a thick and impenetrable forest. The first settlement is dated XIth century; the name is a reference to how awkward it was to reach Caprarola (Ital. capra means goat). 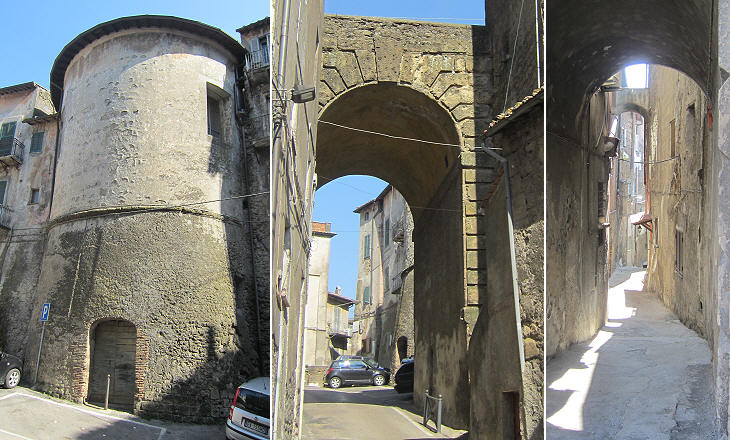 (left) One of the towers which protected the oldest part of Caprarola; (centre) XVIth century bridge supporting the main street; (right) a side street

During the XIVth century Caprarola, similar to other towns of northern Latium, was a fiefdom of the Prefetti di Vico family. In 1434-1435 papal authority in the region was re-established by Cardinal Giovanni Maria Vitelleschi and the last of the di Vico was beheaded at Soriano. 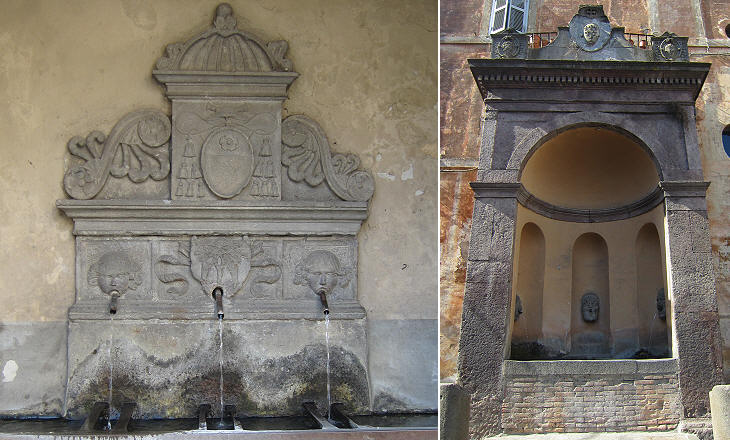 In the second half of the XVth century Caprarola and nearby Ronciglione became a fiefdom of the Della Rovere, the family of Pope Sixtus IV. His nephew Cardinal Raffaele Riario, the founder of Palazzo della Cancelleria in Rome, was governor of Viterbo in 1498-1506. During this period he started the construction of a villa at Bagnaia and he built a small palace and an aqueduct at Caprarola.
Cardinal Riario modified the medieval layout of Caprarola by opening a straight street. In July 1520 he retired to Caprarola; in November he left the small town and went to Naples where he died in the following year.
Ronciglione and Caprarola were acquired by Cardinal Alessandro Farnese seniore who in 1534 became Pope Paul III. 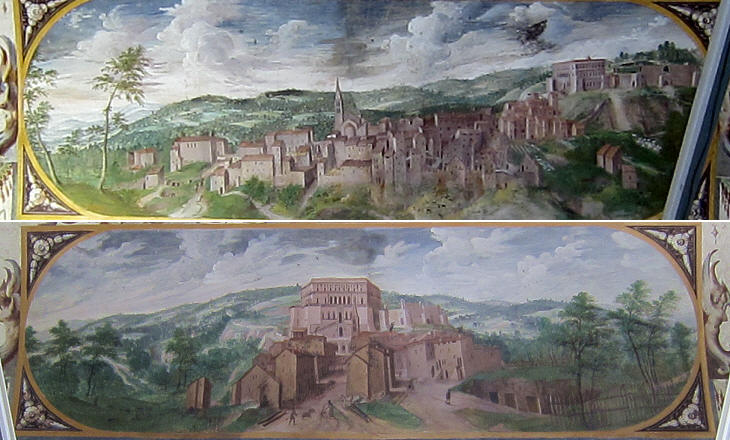 One of the first acts of Pope Paul III was to appoint two new cardinals and namely his two grandsons Alessandro Farnese iuniore and Guido Sforza di Santa Fiora.
Cardinal Alessandro Farnese iuniore became a key personage of Renaissance Rome until his death in 1589, to the point that he was referred to as il Gran Cardinale (the Great Cardinal). He chose Caprarola for building a complex which was at the same time a fortress, a city palace and a countryside retreat. 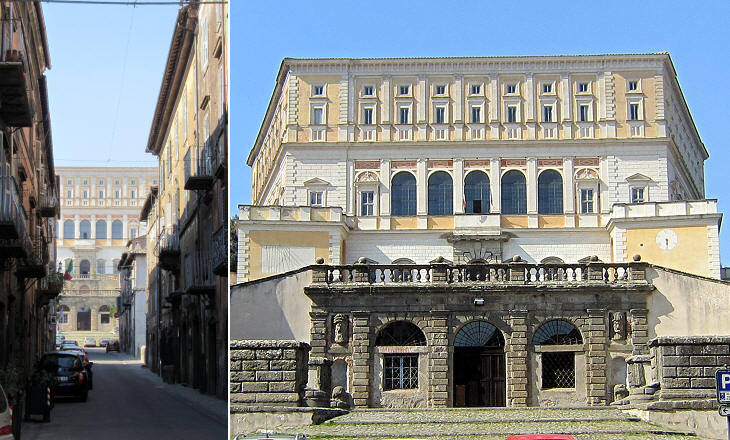 In order to provide the new palace with an appropriate approach the straight street opened by Cardinal Riario was lengthened by Cardinal Farnese. The limited width of the street emphasized the huge mass of Palazzo Farnese which stood above a large artificial terrace. 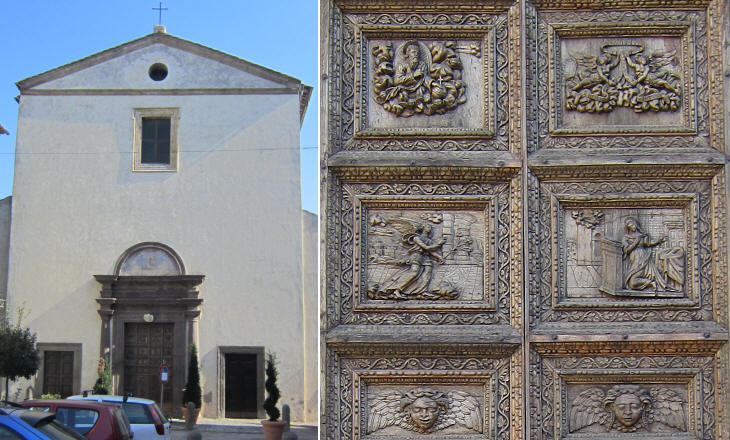 Cardinal Alessandro Farnese promoted the enlargement and embellishment of an existing church at Caprarola and he paid for its elaborate central door. The image used as background for this page shows a detail of the door depicting a fleur-de-lys, the heraldic symbol of the Farnese. 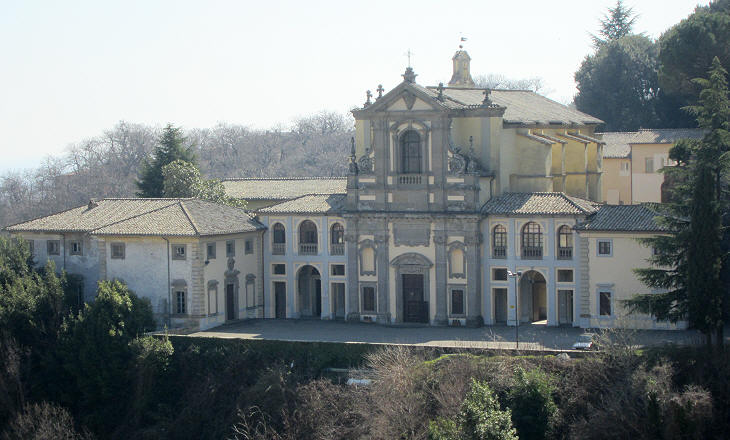 Cardinal Odoardo Farnese, grand-nephew of Alessandro, continued to embellish Caprarola with new buildings. The town was part of the Duchy of Castro and Ronciglione, a sort of small state which the Farnese retained until 1649.
The construction of S. Teresa, a Discalced Carmelitan monastery was commissioned by Cardinal Odoardo Farnese to Girolamo Rainaldi, an architect who designed many buildings at Parma, another fiefdom of the Farnese. 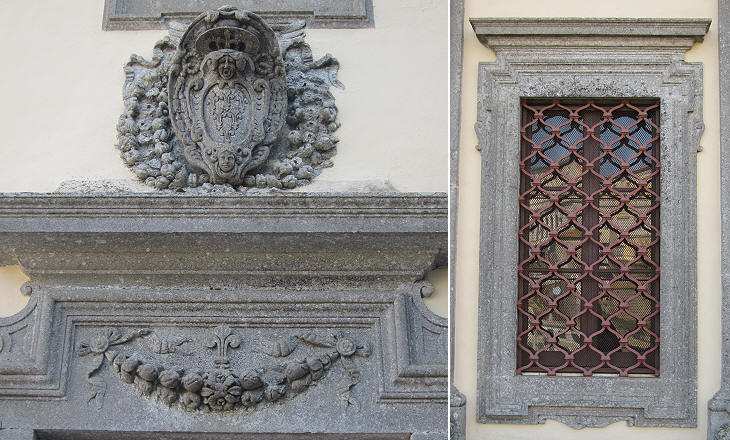 S. Teresa: (left) detail of the entrance to the left side building; (right) detail of a window having a railing similar to that designed by Gian Lorenzo Bernini for Ponte S. Angelo

The utilization of dark volcanic stones for the decoration of buildings is very common throughout Latium, because of the geological origin of the region. The contrast between dark stones and white walls is sometimes excessive; not so at S. Teresa where Rainaldi utilized a light grey stone, which in addition could be finely sculptured. The monastery is located on a terrace opposite Caprarola. 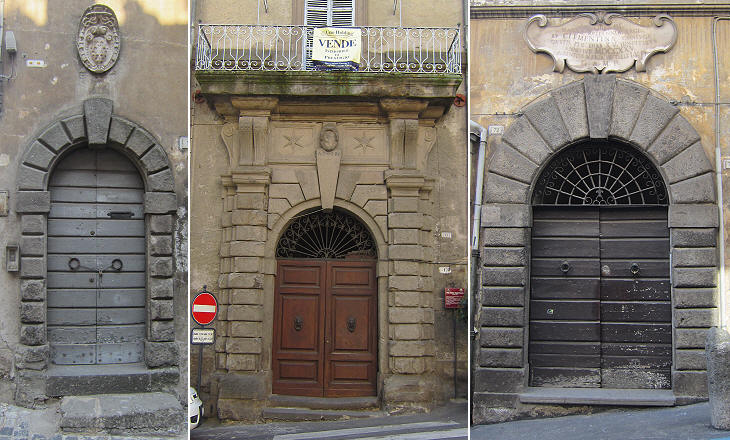 In 1649 the Farnese lost their rights to the fiefdom of Caprarola, but retained their palace which was inherited by Charles of Bourbon in 1731. In 1735 Charles became King of Naples and he stripped Palazzo Farnese at Caprarola and Palazzo Farnese in Rome of their works of art to embellish Naples and the royal palace he built at Caserta.
Caprarola and its palace fell into oblivion. The 1883 Baedeker's guide to Italy informed travellers on their way to Rome that near Ronciglione a path leads through wood to the once greatly renowned, but now seldom visited, castle of Caprarola.

Move to Palazzo Farnese di Caprarola and to its gardens. 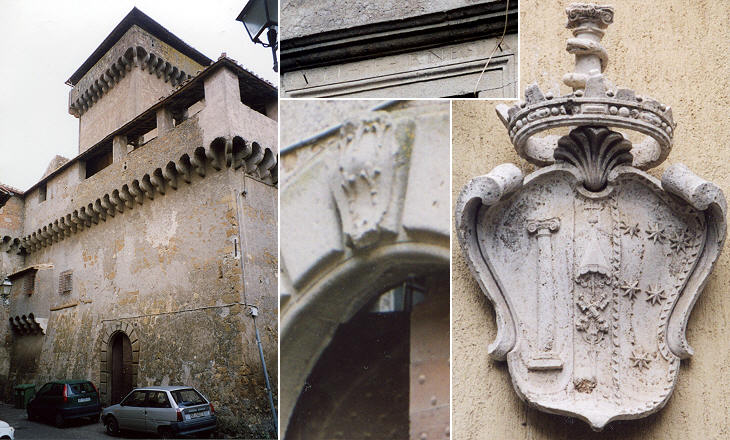 Carbognano: (left) the Castle; (centre-above) window with the name of Giulia Farnese; (centre-below) coat of arms of the Farnese on the main entrance of the castle; (right) coat of arms of Egidio Sciarra Colonna (left) and of his wife Anna Vittoria Altieri, a distant relative of Pope Clement X

Carbognano most likely owes its name to its charcoal (carbone = coal). Today it has a reputation for its hazel-nuts. The little town is dominated by a castle, which Pope Alexander VI donated to Orsino Orsini, husband of Giulia Farnese. Giulia was a beautiful young woman and became the mistress of the Pope who appointed cardinal her brother Alessandro. Carbognano was eventually acquired by the Sciarra Colonna family. 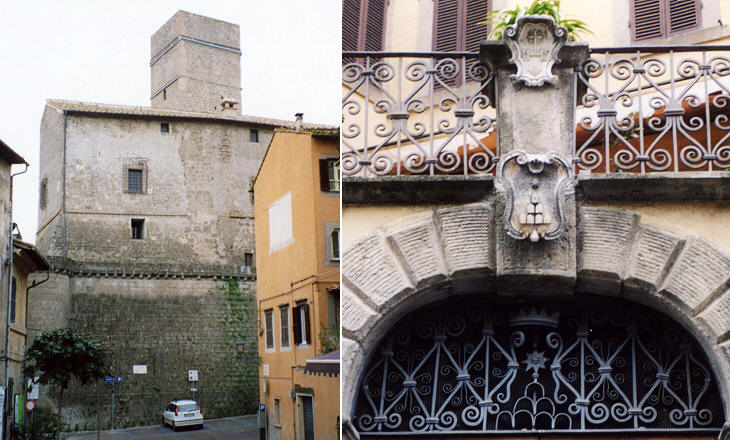 Fabrica: (left) the Castle; (right) portal with the heraldic symbols of the Chigi (six mountains and a star)

The Farnese ruled also over Fabrica, a small settlement on a hill not far from the ancient town of Falerii Novi (near Civita Castellana).