- Carmona: Outside the City Walls
(left - Mosaic at Italica; right - decoration at the Alcazar of Seville)

You may wish to see two introductory pages to this section or a page on the city within the walls first. 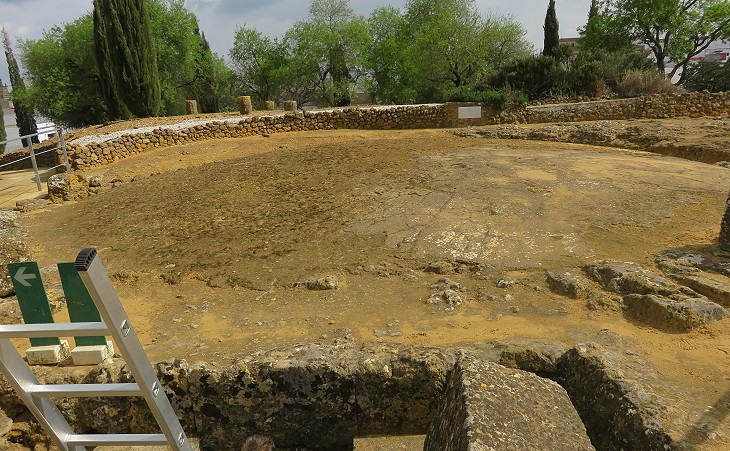 The first excavations of the necropolis which lies west of Puerta de Sevilla were undertaken in 1882-1885 by George Edward Bonsor (1855-1930), a French-born English painter who visited Carmona in 1881 and decided to settle there. In May 1885 the (private) archaeological site, was open to the public; it included a small museum for the statues and other objects which were found in the tombs. In 1930 it was donated to the Spanish State. In 1917-1921 Bonsor was involved in the excavation of Baelo Claudia, a Roman town near the Strait of Gibraltar. 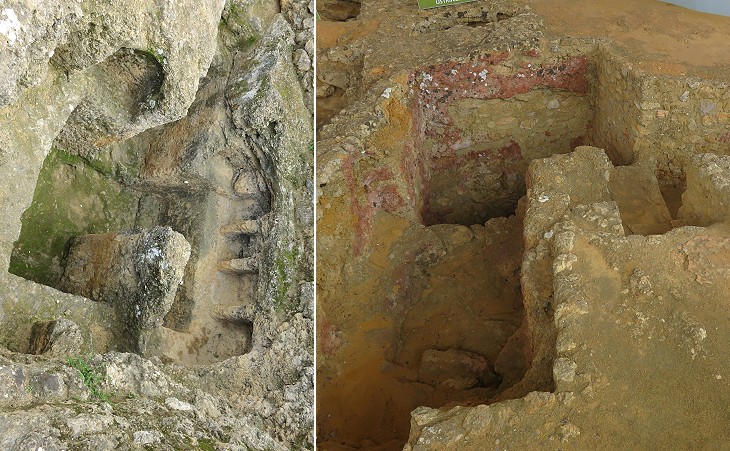 The tombs were cut into the limestone ground similar to what can be seen at Paphos on Cyprus or Tarquinia in Italy. They were often shared by a number of families, a practice which was common in ancient necropolises as at Cerveteri. 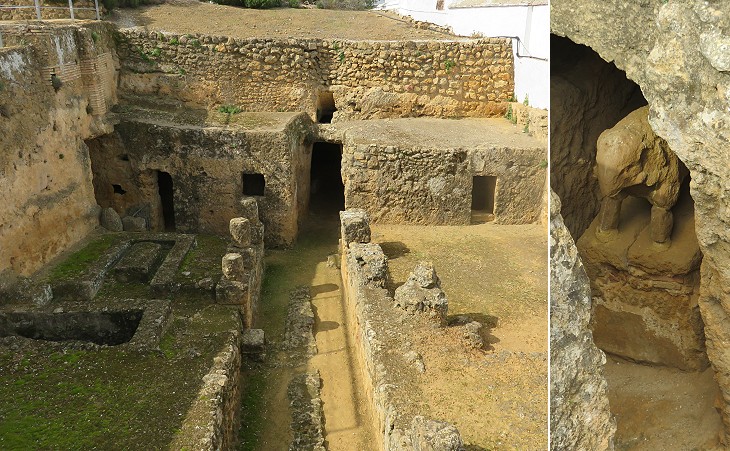 (left) Tomb of the Elephant; (right) guardian statue after which the tomb is named

One of the most interesting tombs was found in 1895. In addition to a small statue of an elephant it contained references to the worship of Cybele or Magna Mater and Attis, two deities of oriental origin. Their cult became very popular, together with that of Mithra, in many parts of the Roman Empire during the IInd and IIIrd centuries AD. (left) Tomb of Servilia - courtyard; (right) statue of Servilia found at the tomb and now in the museum

This very large tomb which resembles the peristyle of a Roman house was discovered in 1905 by Juan Fernandez Lopez, a friend of Bonsor. He was of the opinion that the tomb had made use of a previous Phoenician shrine. It is named after the inscription "Serviliae L(uci) f(iliae) / P(ubli) Mari (uxori) / mater d(edicavit)" i.e. (To Servilia, daughter of Lucius, wife of Publius Marius, her mother dedicated") on a pedestal supporting the statue of a woman. 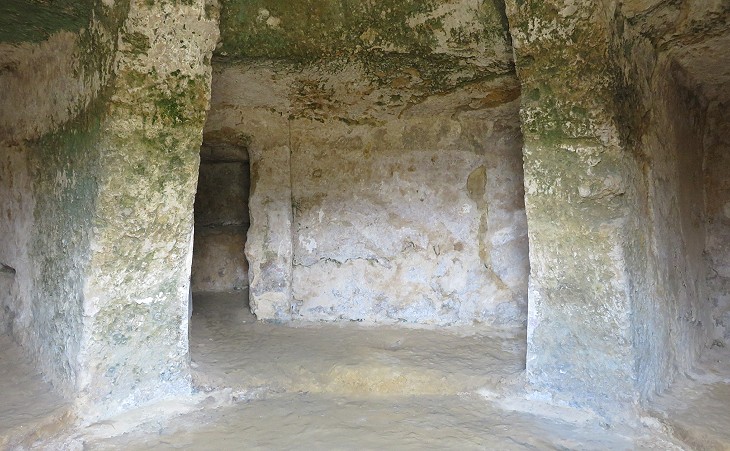 In this tomb a passageway leads to the main chamber, a spacious room excavated into the rock with a dome with wide ribs meeting at a large central opening. In an adjoining chamber a sarcophagus was found, but it is an exception because cremation was the prevailing mode of burial in this necropolis which was used between the IInd century BC and the IInd century AD. It is likely that most underground tombs had on top rooms for funerary ceremonies, but these were all pulled down over the following the centuries to utilize their stones. 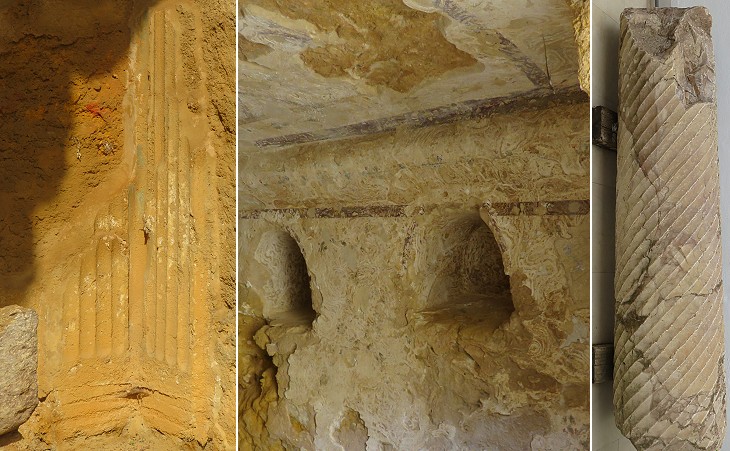 Necropolis: elements of the decoration: stucco, fresco and marble

Bonsor and his friends found some 300 tombs, but the very large majority of them had been violated by looters, who damaged their decoration in addition to stealing works of art and funerary objects. You may wish to see the decorations of the Great Necropolis of Porto near Rome and of the necropolis of Tyre in Lebanon. 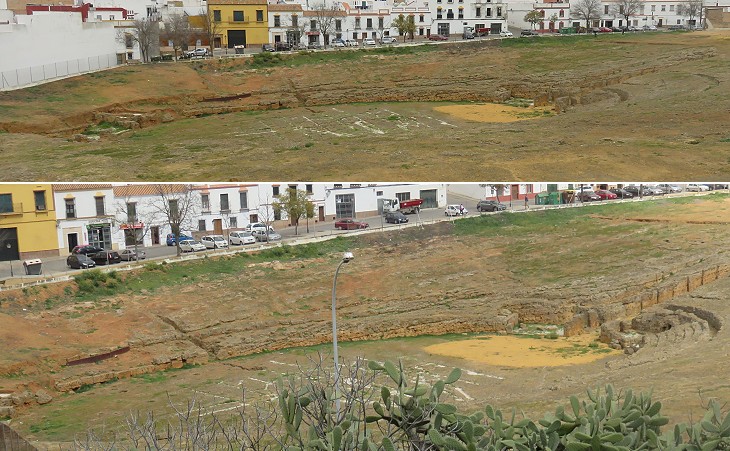 The area of the necropolis included an amphitheatre which was partially excavated into the rock making use of the natural inclination of the land, and the rest of the building was completed with large ashlars. It is dated Ist century BC. It might have had a wooden structure to increase the number of seats. According to Bonsor it was used also as a theatre by erecting a wooden stage. This opinion was supported by the fact that the site of a proper theatre had not been identified yet. In 1995 however large walls were discovered inside the town which could have belonged to this public facility. 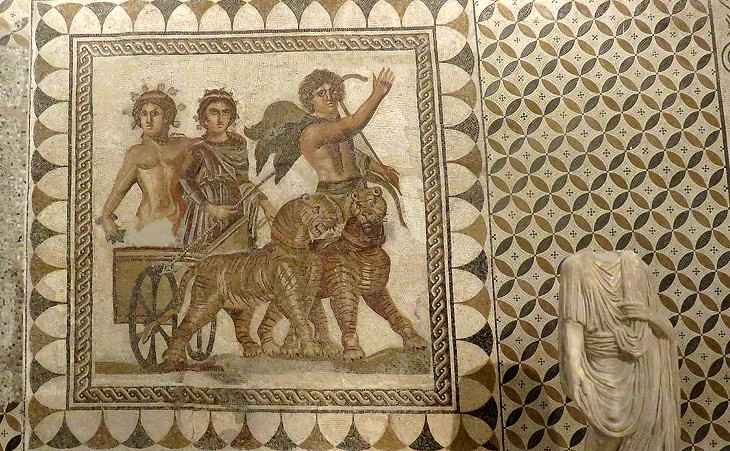 This fine mosaic most likely depicts the marriage/triumph of Bacchus/Dionysus and Ariadne whom the god found on the island of Naxos, where she had been abandoned by Theseus. It is very similar to mosaics found in Algeria and in Tunisia. Similar to what occurred in the Roman provinces of northern Africa a local school of mosaic makers flourished in Spain. 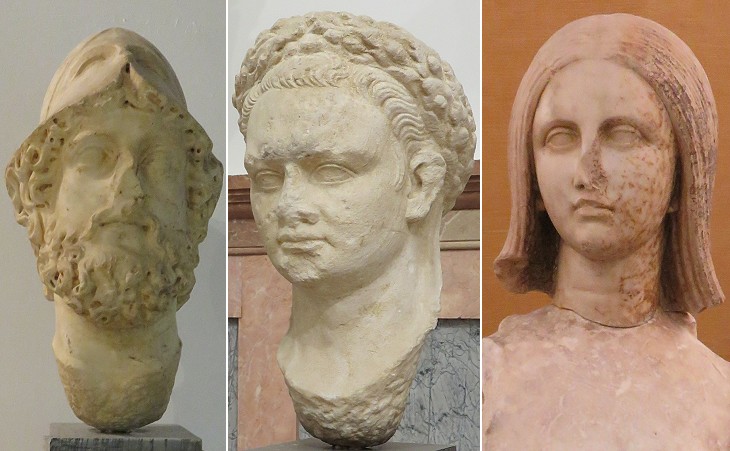 The image used as background for this page shows a funerary mask found in the Roman necropolis of Olivar Alto near Utrera, another town in Andalusia, at the Archaeological Museum of Seville.

Return to Carmona within the City Walls.