You may wish to read an introduction to this section or page one first.

We rode over a broken country, sterile and deserted. On crossing a low ridge, we came in sight of the minarets and domes of Shiraz. All round the city this plain appeared to be divided into gardens, separated from each other by mud walls, within which towered tall and slender cypresses, the only trees visible from the distance at which we were. (..) This, then, was the city considered by the Persians the most enchanting residence in their country and consequently in the world; these were the gardens so famed for their beauty, fertility, and loveliness; and this oasis in the midst of a stony desert was the earthly Paradise of which we had heard so much.
John Ussher - A Journey from London to Persepolis - London 1865. A Fellow of the Royal Geographical Society. 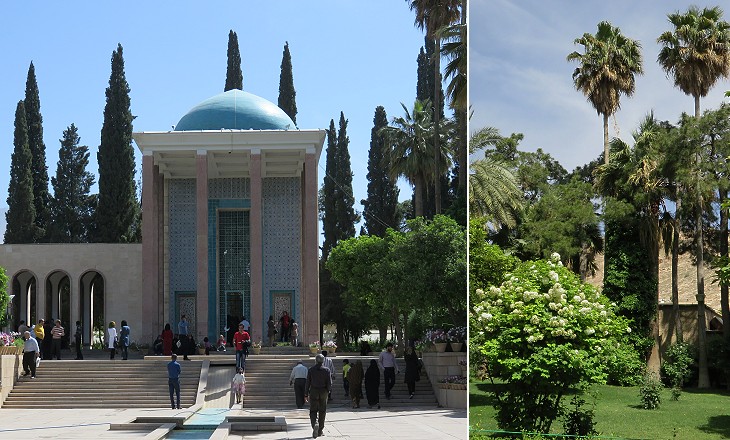 We reached Shiraz, a densely populated town, well built and admirably planned. (..) In the whole East there is no city that approaches Damascus in beauty of bazaars, orchards and rivers, and in the handsome figures of its inhabitants, but Shiraz. It is on a plain surrounded by orchards on all sides and intersected by rivers. (..) Shiraz contains many sanctuaries which are visited and venerated by its inhabitants. Among the sanctuaries outside Shiraz is the grave of the pious shaykh known as as-Sa'di, who was the greatest poet of his time in the Persian language, and sometimes introduced Arabic verses into his compositions. There is a fine hospice which he built in this place having a beautiful garden within it, close by the source of the great river known as Rukn Abad.
H. A. R. Gibb - Selection from the Travels of Ibn Battuta in 1325-1354
In Schiras is an ancient Mosque, wherein is the Sepulcher of a Sadi, whom the Persians esteem the best of their Poets. It has been a very fair one, accompani'd with a large Building, which was once a Colledg; but it runs to ruine, as do also many other Edifices within the City. Just against this Mosquee you descend by a pair of Stairs into a large Well, at the bottom whereof is a Vase full of Fish, which no-body dares to touch, it being Sacriledg to rob the Sadi of what belongs to him (similar to the carps of Balikli-Gol at Sanliurfa).
Jean-Baptiste Tavernier - Travels through Turkey and Persia (1630s-1660s)
Sheikh Mosleh al-Din was born at Shiraz in 1210, but he travelled extensively through Muslim countries when these were invaded by the Mongols in the XIIIth century. When he eventually returned to Shiraz he enjoyed the protection of Atabeg (governor) Abubakr Sa'd. He wrote Bostan (The Orchard) and Gulestan (The Rose Garden) under the pen name Sa'di Shirazi, as a tribute to his patron and his hometown. His tomb in the outskirts of Shiraz became the site of a pilgrimage which continues to these days. His works were translated into French and German in the XVIIth century.

Has this cock perhaps not crowed at the proper time this night
And have the lovers not had their fill of embrace and kiss.
(..) Lips against lips like the cock's eye
Are not to part at the crowing of a silly cock.

from The Gulestan - translation by Richard Francis Burton 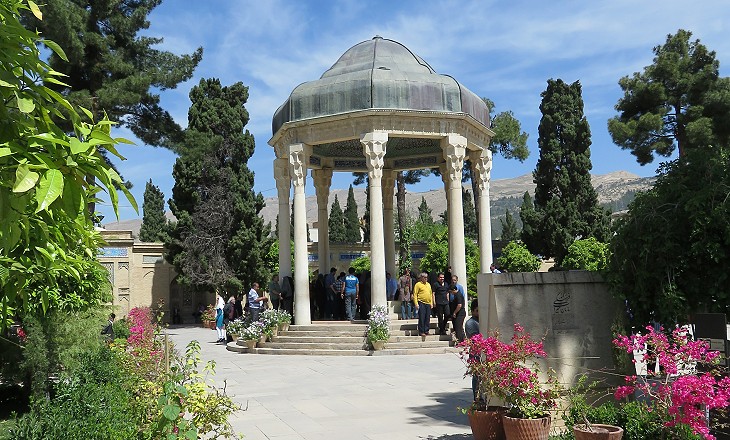 About a quarter of a league from the City, toward the West, is to be seen a Church-yard encompast with Walls; in the middle whereof, looking toward Mecca, stands a Monument very much frequented by the Dervis, other devout people, who lay their Prayers there, it being the Sepulcher of Hougia Hafiz, for whom they have a very great veneration. The year of his decease is set down upon his Tomb; being in the year 1381: and he purchas'd that great esteem among the Persians, for having compos'd a great Book of Morality, and for that he was also one of the best Poets of his time. He has left one great Poem behind him in the praise of good Wine; which has caus'd many to aver, that Hougia-Hafiz. was no good Musulman, in regard he has so highly prais'd a thing which is so strictly forbidd'n by the Law of Mahomet. Neer to the Church-yard is a fair Garden, which men go to see for the beauty of the Cypress-trees, which are its chief ornament. They are to be admir'd for their height and bigness, among which there is one that was planted by the hand of Sha-Abbas the Great himself, in the year 1607; and it may well deserve to have been planted by the hand of a Monarch; for it was bigger then the rest that had been planted above a hunder'd years before. Tavernier
Khwaja Shams-ud-Din Muhammad (c. 1320-1389), known by his pen name Hafez Shirazi, lived and died in Shiraz, apart from some years of self-imposed exile at Isfahan. His collection of poetry was compiled by his disciples and is known as Divan-i Hafez (Anthology of Hafez). It is mostly composed of short poems with lyrical and mystical themes and is commonly considered to be the zenith of Persian poetry.

Translation by H. Wilderforce Clarke
Hafez was buried in a garden he frequently praised in his poems for its beauty and cool breezes that one could not even find in Paradise.
The present complex was shaped in the 1930s when a modern open pavilion was erected over Hafez's grave. French architects and archaeologists André Godard and Maxime Siroux are credited with the renovation plan. Tile inscriptions of Hafez's poems run along the internal surface of the octagonal frieze. 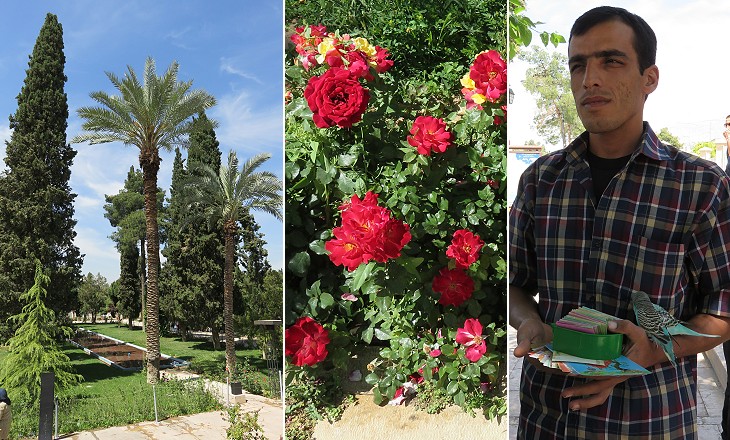 The odes of Hafiz are considered by the Persians as unequalled by those of any other poet of any age or nation. His memory is still highly venerated, and his works are regarded with superstitious reverence. Those who desire to penetrate the secrets of the future are in the habit of opening at random a volume of his poems, and the first lines that present themselves are, by some distortion of the sense, imagined to convey the desired information. Some of the more bigoted and fanatic among the clergy consider his productions as immoral; but public opinion overrules their decision. Ussher
In 1819 Johann Wolfgang von Goethe published West-Eastern Divan, a collection of poems inspired by those of Hafez, which Goethe had read in the free translation into German by Joseph von Hammer-Purgstall. 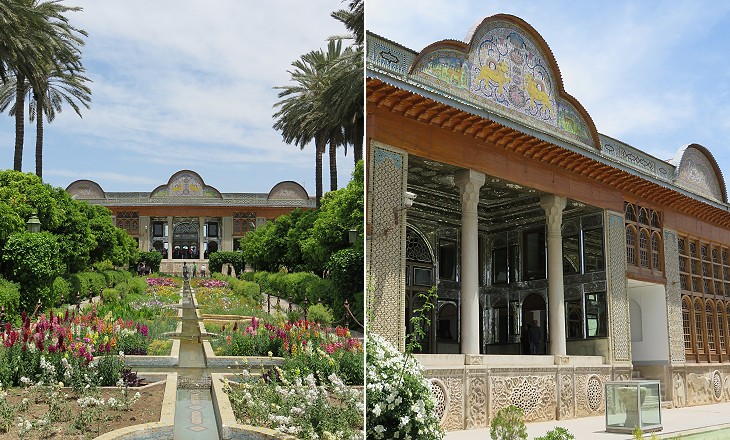 Naranjestan-e Qavam (The Orange Garden of the Qavam family): (left) the garden; (right) the main pavilion

Members of the Qavam family held important offices, including that of Prime Minister, during the Qajar period and until 1955. Some of them were sent as ambassadors to European countries. Between 1879 and 1886 they built a large residential complex at Shiraz with a very elegant biruni, a pavilion where they received their guests and held celebrations. 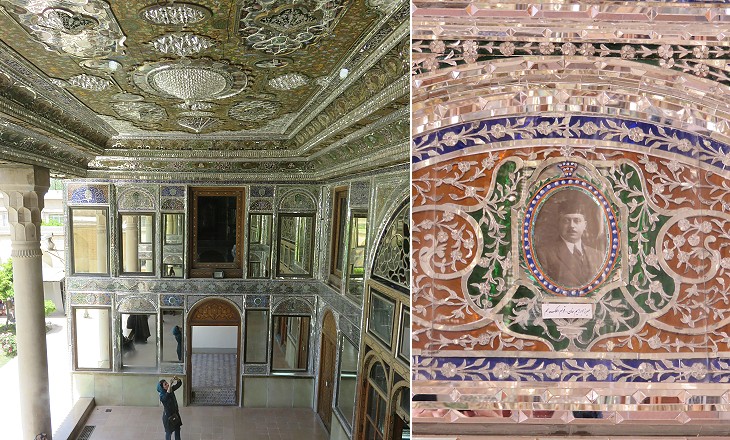 Naranjestan: (left) talar (throne hall) (the image used as background for this page shows a detail of the ceiling); (right) detail of its decoration with a photograph of the landlord

The design of the biruni recalls that of Chehel Sotun, one of the Safavid royal pavilions at Isfahan which has a talar decorated with Venetian glass. The wealth acquired by the Qavam was in part due to their involvement in the opium trade as mayors of Shiraz. In addition to the biruni, the residential complex included an anderun, the private quarters of the family, a bathhouse, a stable and a hosseinieh, a building dedicated to religious ceremonies. 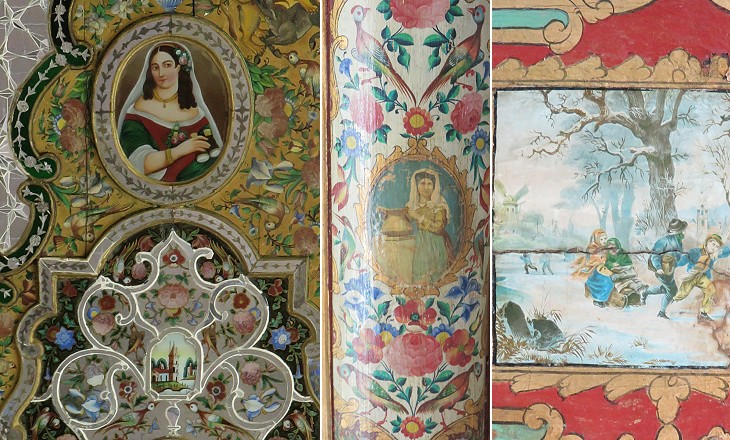 Naranjestan: Italian and Dutch influences in the decoration

While the overall design of the biruni and of the garden followed traditional Persian patterns, some details of the decoration are similar to those one can find in European mansions of the same period: Renaissance-like portraits of Italian ladies, women of small Italian towns, e.g. Cervara di Roma and snowy landscapes with Dutch windmills. 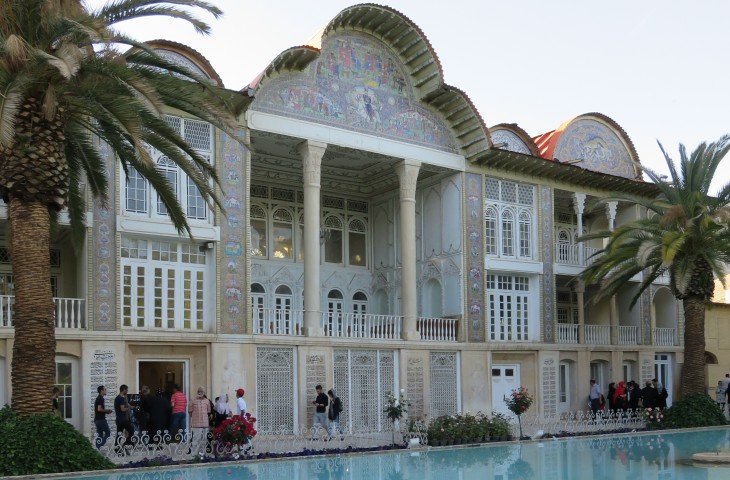 The Qashqais are Turkish-speaking nomadic tribes living in the Zagros Mountains north of Shiraz. In the XIXth century their leaders settled in the city and acquired great power by ensuring the loyalty of their tribes to the Qajar government. Bagh-e Eram was built in the XIXth century by a powerful Qashqai family, but the pavilion was erected by Haj Nasir-al Molk in the second half of that century. In 1953 Qashqai leaders were exiled and Bagh-e Eram was confiscated and assigned to the University of Shiraz. In 1979 Khosrow Khan Qashqai returned from exile and was reacquainted with the garden which he donated to the people of Shiraz. 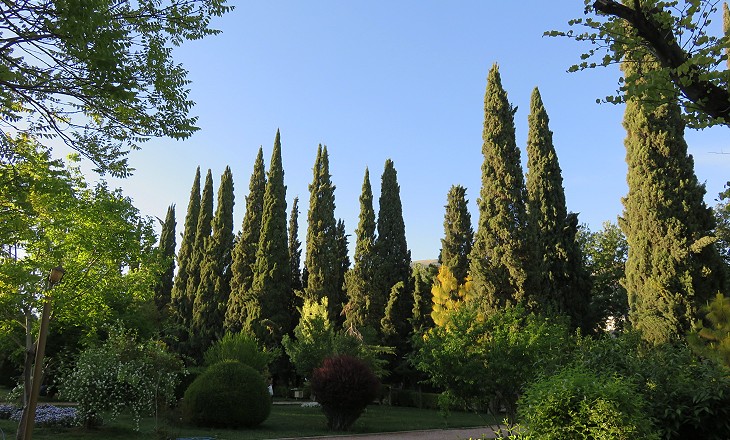 The gardens here are many and those both large and beautifull. (..) All of them be safeguarded with walls of exceeding good work: they rather resemble groves or wildernesses than gardens but by that name are called; abounding in lofty pyramldall Cypresses, broad-spreading Chenawrs, tough Elme, streight Ash, knotty Pines, fregarant Masticks, Kingly Oaks, sweet Mirtles, useful Maple; and in fruit trees also, as Grapes, Pomgranads, Pomcitrons, Orenges, Lemmons, Pistachoes, Apples, Pears, Peaches, Chestnuts, Cherries, Quinces, Walnats, Apricocks, Plums, Almonds, Figgs, few Dates, and Mellons of both sorts, and flowers rare to the eye, sweet to the smell and usefull in physick: the earth is dry and green and the ayre salubrious and healthy.
Sir Thomas Herbert - Some Yeares Travels Into Divers Parts of Asia and .. (in Persia in 1626-1629) - 1638
In 2011 UNESCO added 9 Persian gardens to their list of World Heritage Sites. Bagh-e Eram, which has been turned into a botanical garden, is one of them together with that built by Cyrus the Great at Pasargadae, Bagh-e Dolatabad at Yazd, Bagh-e Fin at Kashan and Chehel Sotun at Isfahan. 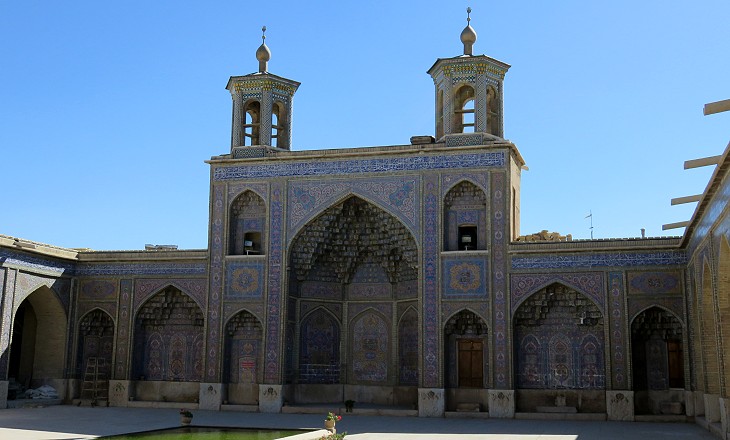 molk means kingdom and it was added to names to identify important dignitaries who served the Shas. In 1876-1888 Haj Nasir-al Molk, the same who erected the pavilion at Bagh-e Eram, built this large mosque, which in many ways recalls Vakil Mosque (in page one). In 1856-1857 a war broke out between Great Britain and Persia because the former wanted the latter to withdraw from Herat in Afghanistan. The war was easily won by British troops. Great Britain acquired great influence at the Shah's court which resulted in having input in the appointment/removal of governors at Shiraz and other southern locations. 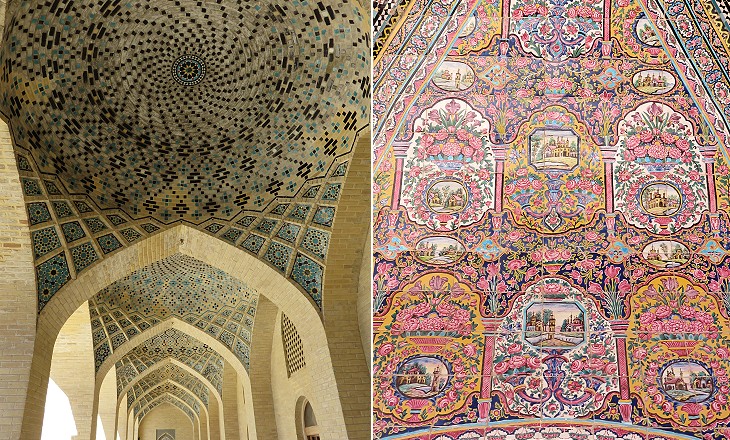 Nasir-al Molk Mosque is known as the pink mosque because of the prevailing colour of its tile decoration which is based on the depiction of roses (see a page with some images of Iran roses). 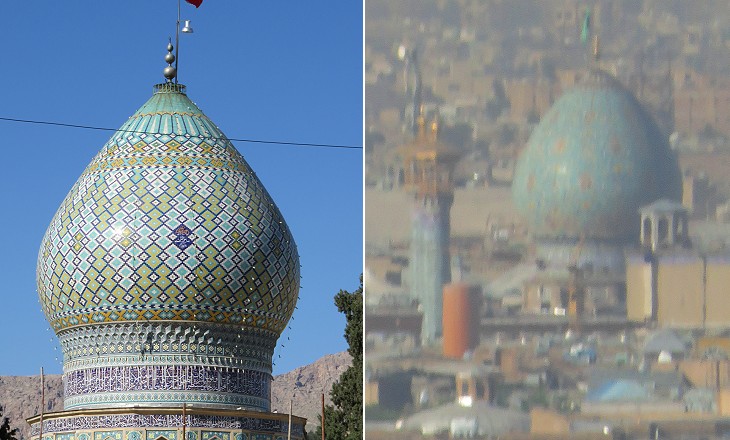 Most mausoleums in Persia were built following a pattern established in the XIIth century; they were small, octagonal and had a pyramidal roof as at Takht-e Fulad cemetery in Isfahan. During the XIXth century two existing old mausoleums at Shiraz were greatly enlarged and provided with an unusual onion dome (that of Aramgah-e Shah-e Cheragh was rebuilt in 1958). Their interiors are entirely decorated with small mirrors.
I suddenly thought of that unfortunate species, modern interior decorators, who imagine they can make a restaurant, or a cinema, or a plutocrat's drawing-room look rich if given money enough for gold leaf and looking-glass. Byron