- Subiaco: the Town
(detail of a fresco at S. Onofrio)

In July 1857 Ferdinand Gregorovius, a German historian best known for his studies on medieval Rome, visited Subiaco to look at some documents in the library of the Benedictine monastery of S. Scolastica. In the following year a German paper published Subiaco das älteste Benediktinerkloster des Abendlandes, a short account describing this monastery and that of S. Benedetto (aka Sacro Speco), which is located nearby. Gregorovius provided his readers with a detailed historical background of the two monasteries and of their abbots. 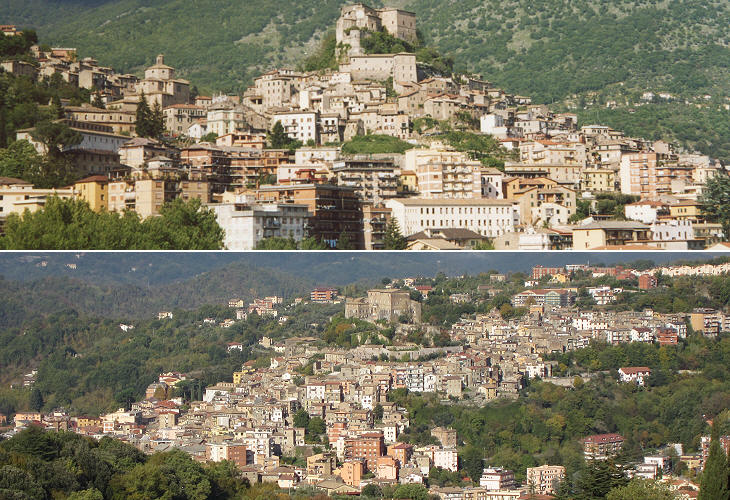 Views of Subiaco: (above) from S. Francesco; (below) from the road leading to S. Benedetto

The far-famed Benedictine Monastery of Subiaco lies in one of the most beautiful mountain gorges of the Roman Campagna, four and forty miles1 from Rome. Through this ravine the ever-cold waters of the Anio rush down to the Tiber. (..) The town of Subiaco, however, is not mentioned in a 1052 list of the Abbey properties as under its ecclesiastical suzerainty. Abbot John built a fortress there - so the historian relates - in the year 1068, and then Subiaco at last became the feudatory of its Monastery. That fortress and palace may still be seen, crowning the conical hill on the slopes of which the town is built.
Gregorovius - translation by Dorothea Roberts
In his account Gregorovius concentrated on the monasteries and he mentioned Subiaco only briefly. The town stands on a hill in the upper valley of the Aniene (Lat. Anio), a tributary river which empties into the Tiber near Ponte Salario after having crossed Tivoli.
The name of the town derives from Latin Sublaqueum (below the lakes), a reference to the fact that Subiaco was located after three artificial lakes created in the Ist century AD as fishing ponds for a nearby villa built by Emperor Nero (the lakes do not exist any longer). 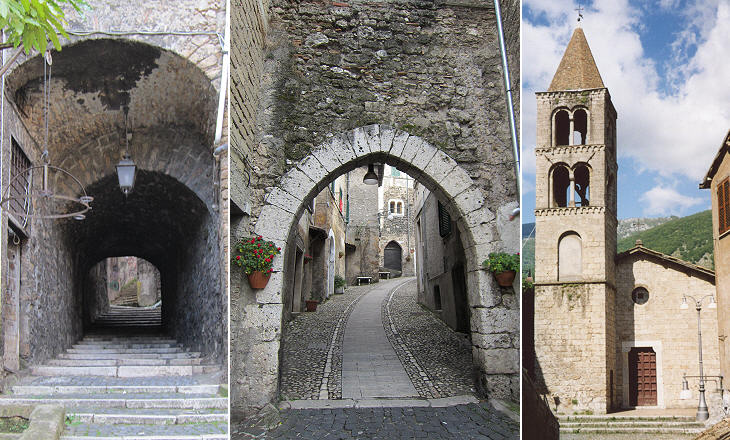 The town of Subiaco was perhaps founded to house the engineers and slaves who were involved in the construction of Nero's villa or of Anio Novus, one of the main aqueducts which supplied Rome. The town was ruled by the abbots until 1753 when Pope Benedict XIV abolished their feudal rights and placed Subiaco under the direct jurisdiction of the Papal State. 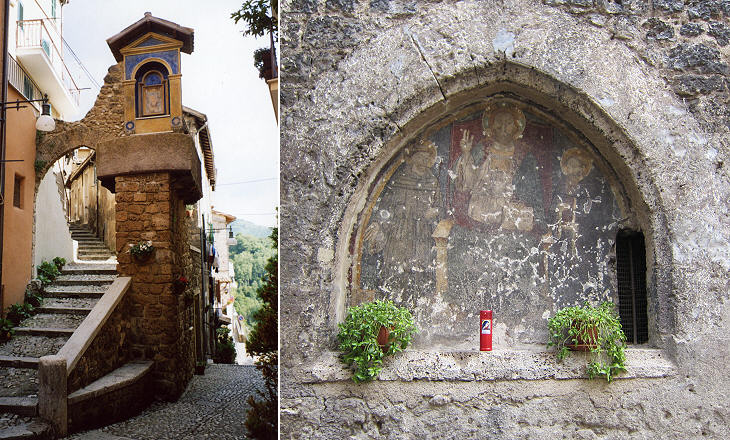 Notwithstanding damage suffered during WWII, the upper part of Subiaco retains a medieval atmosphere; unlike most of the small towns of Latium it does not have those minor palaces which are a sign of the presence of noble or wealthy families in the history of the town; the Benedictine abbots treated the inhabitants of Subiaco as serfs and they did not even build a large church in the town. 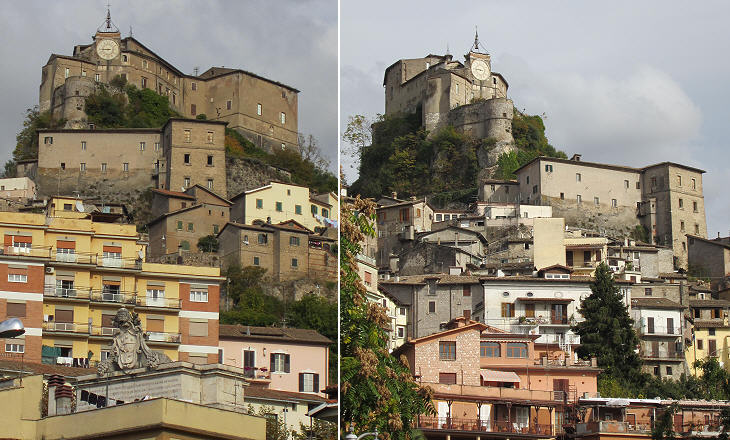 The feudatories of the Monastery were of three ranks: free vassals, who were not obliged to bear arms or fight for their ecclesiastical landlord, as they held no land in fief from him; the Milites, who were bound to fight for the Abbot in time of war, being feudatories of the Monastery; and lastly, the Servi, or bondsmen. (..) Thus a small, but efficient, army was always at the call of the Abbot. Later on he subsidised troops, just like any other feudal baron. If he were a man of war, he led his troops into battle in person, mounted on his charger, his sword by his side, his shield on his arm. His standing feuds with the Bishops of Palestrina, Tivoli, and Anagni, as well as his constant quarrels with the barons, gave ample occasion for such deeds of arms. The Abbot went to his eternal rest with his sword either girt on him, or laid by his side. These Abbots belonged, for the most part, to the most important families of the Campagna. Gregorovius 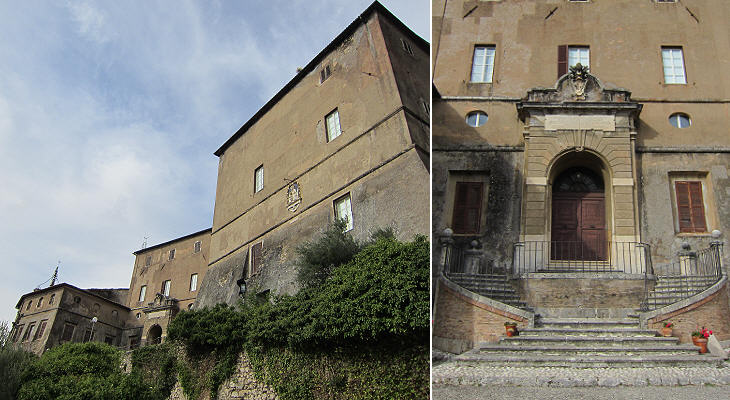 In 1456 Pope Calixtus III made Subiaco an abbey in commendam. He gave the first presentation to the office to the Commendatore Juan Torquemada, a Spaniard, Cardinal of Santa Maria in Trastevere, and a man of great learning. He received, with the administration of that rich benefice, the task of reorganising the Abbey, and settling the affairs of its feudal castles. A new statute was established and enacted, namely, that the Abbot, when inducted to the See, should, in the first place, swear in an authorised governing body of men qualified to receive the oath of allegiance of all the subjects of the Monastery. Gregorovius 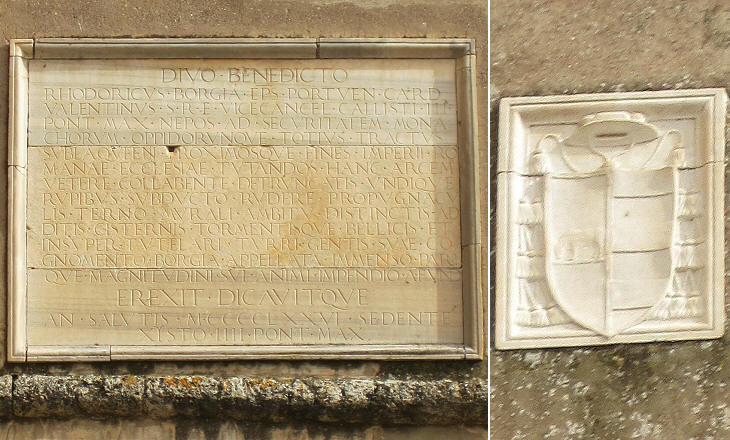 (left) 1476 inscription by Cardinal Rodrigo Borgia in which he explicitly indicated that the tower he built should be called after him (..turris gentis suae cognomento Borgia appellata); (right) coat of arms of the Cardinal

In 1471 Pope Sixtus IV, immediately after his election, appointed Cardinal Rodrigo Borgia commendatory abbot of Subiaco, probably in return for the support received during the conclave.
Though not made famous by the writing of learned treatises, Borgia's name is preserved as having built a wing to the palace in 1476. On this he erected a square tower, which is still standing by the side of the Fortress. His coat-of-arms is emblazoned on its outer wall, with an inscription setting forth that Cardinal Rodrigo had strengthened this Fortress of Subiaco for the protection of the monks and their Monastery, and for the greater security of this outpost of the Roman Church. Gregorovius
Cardinal Borgia modified the medieval castle by building a new wing which was at the same time a tower and a palace, where from time to time he resided with his mistress Vannozza Cattanei. In April 1480 she delivered a daughter (Lucrezia) in the Cardinal's apartment at Subiaco. 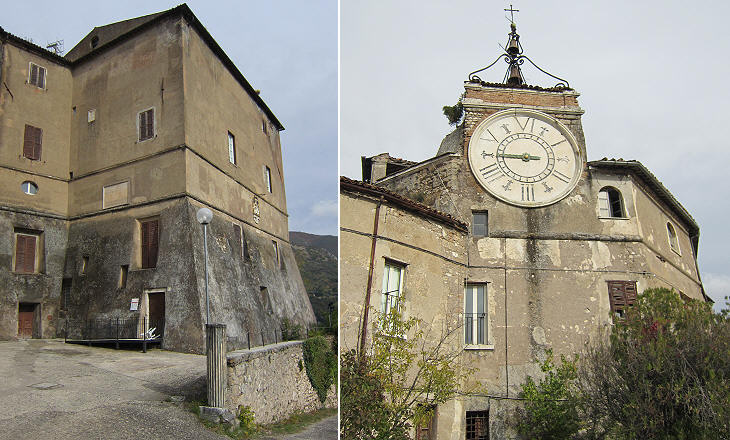 In 1492 Cardinal Borgia was raised to the pontificate as Pope Alexander VI. He bought the vote of Cardinal Giovanni Colonna, at the Conclave, by promising him the reversion of the Abbacy which he himself was about to vacate; but the friendship between Alexander VI and the house of Colonna was short-lived. This most powerful of all the great Roman families now began to contravene the crooked policy of the Borgias, who aimed at creating great temporalities for themselves at the cost of the barons, using craft and subtlety to compass their ends. (..) Eventually the Colonna acquired the Abbacy. They family left no good name behind it. The place itself had little to be grateful to them for; only a few rooms added to the palace, adorned with paintings and with their coats-of-arms, now remain to show that they had reigned at Subiaco for over a hundred years. Gregorovius 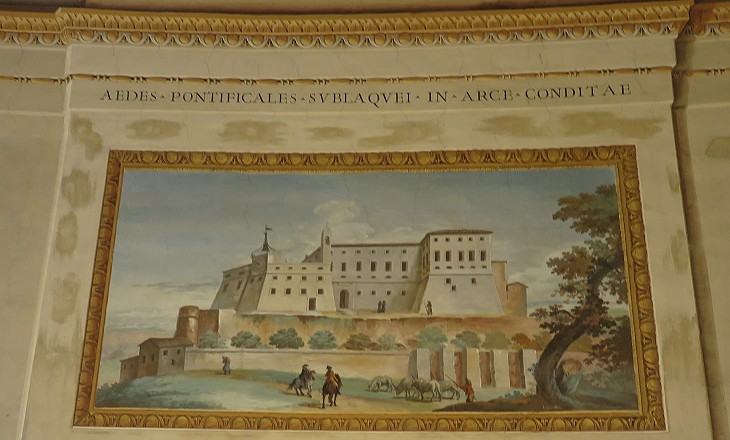 On the 7th of November 1753 the secular jurisdiction of the Cardinal-Abbots of Subiaco was abrogated, at once and for ever. (..) Thereafter its history lost much of its charm. Nevertheless one of the new Cardinal-Commendatori stands out brightly in its records, as having worked beneficently, in the spirit of the later times, for the welfare of this small monarchy. This was Pius VI, Braschi, appointed Abbot in 1773; he continued, after being raised to the Papal throne, to fill Subiaco with benefactions. Gregorovius
The castle was redesigned and new papal apartments were built inside. 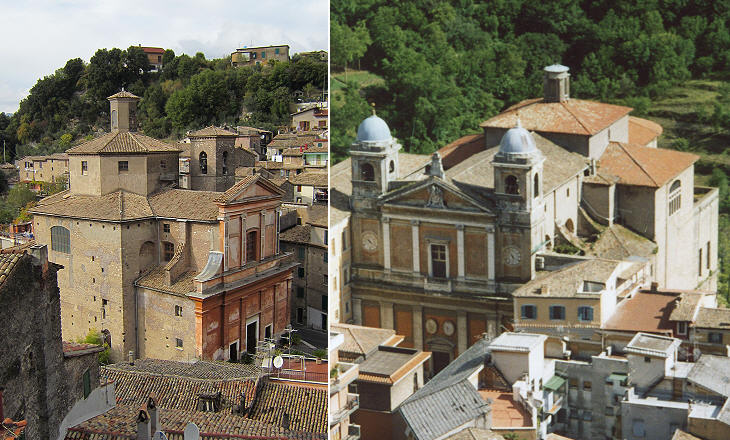 Besides building the church in the town, also a great seminary, renovating the palace, and carrying out other works, his best title to the gratitude of the district consists in that excellent high-road by the side of the Anio which he made between Subiaco and Tivoli. For this great work the citizens of Subiaco raised a triumphal arch in his honour. It is a reproduction of the arch of Titus in Rome, and still embellishes the place which Pius VI raised to the dignity of a town. When he made his entry into Subiaco, in 1789, he passed beneath this arch. Gregorovius
Pope Pius VI favoured the development of paper, textile and copper industries which utilized the water provided by the Aniene River. The river was used also as a source of energy. The image used as a background for this page shows his coat of arms at the top of the arch: the arch itself can be seen in a page dedicated to this Pope. 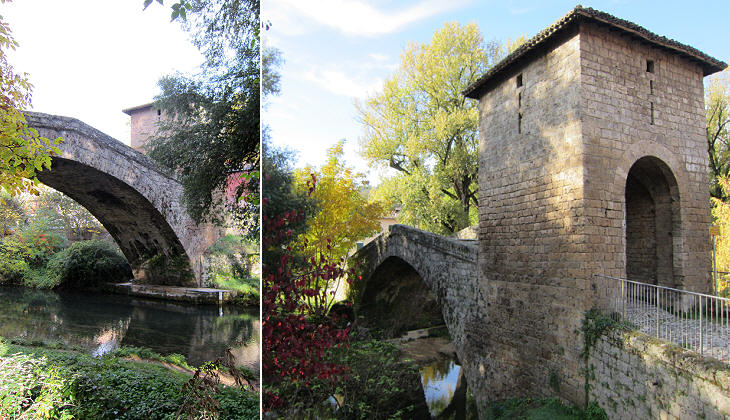 Pope Pius VI restored a medieval bridge built in 1358 by Abbot Ademaro to celebrate a victory over the troops of the Bishop of Tivoli. At that time the popes were at Avignon and they were trying to restore order in the Papal State which was in a chaotic situation; the war between a bishop and an abbot did not go unnoticed and Ademaro was summoned to Avignon and forced to resign his office. 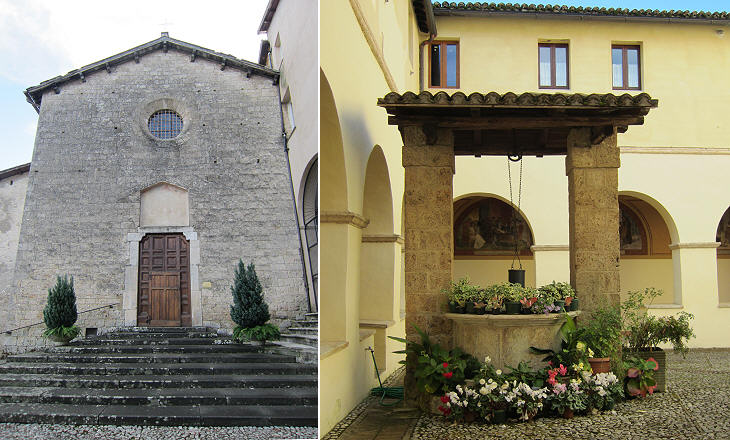 The abbots did not allow other religious orders to establish themselves in Subiaco; an exception was made for the Franciscans because St. Francis of Assisi visited the monastery of S. Benedetto and spent several months there.
S. Francesco is located on the other side of the river and it was built in 1327 on a previous oratory donated by the abbots to St. Francis. 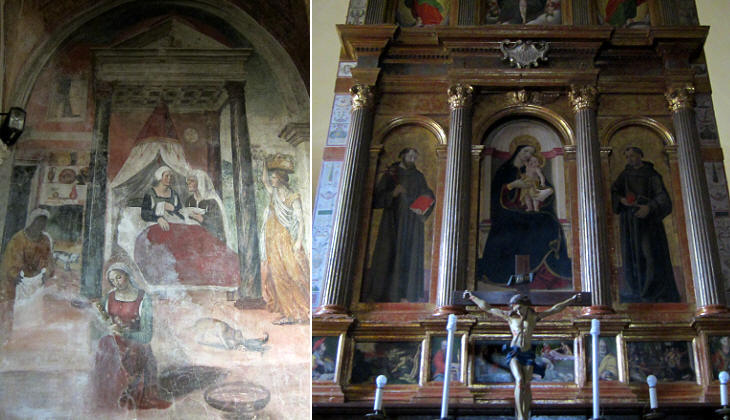 The monastery of S. Benedetto is a sort of art gallery because almost all its walls are painted, but it does not have fine works of the Renaissance, which instead can be seen inside S. Francesco. 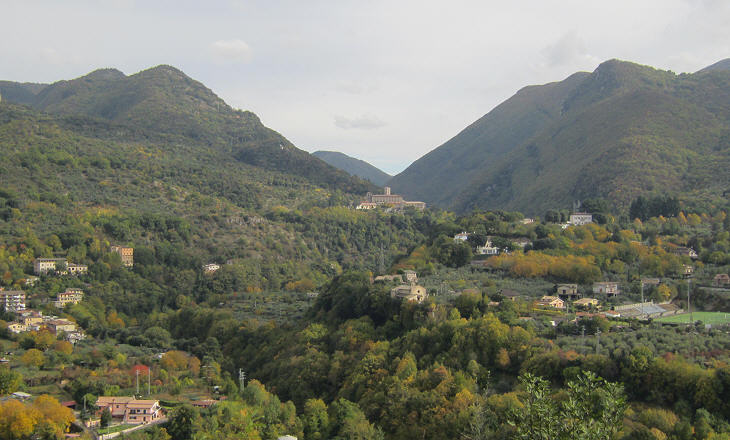