- Nettuno and Torre Astura
(detail of a fresco at S. Onofrio; this page is also part of Giuseppe Vasi's Environs of Rome description)

Ferdinand Gregorovius, a German historian who lived in Rome for 22 years, in June 1854 spent some weeks at Anzio; he described his sojourn there in Idyllen vom Lateinischen Ufer, which he wrote for a German paper. From the inn where he was staying Gregorovius could see Torre Astura, an isolated small castle along the coast where in 1268 Conradin of Swabia, the last German emperor of the Hohenstaufen family, was betrayed and handed over to Charles I of Anjou; Gregorovius decided to walk to Torre Astura together with a German painter he had met at Anzio. 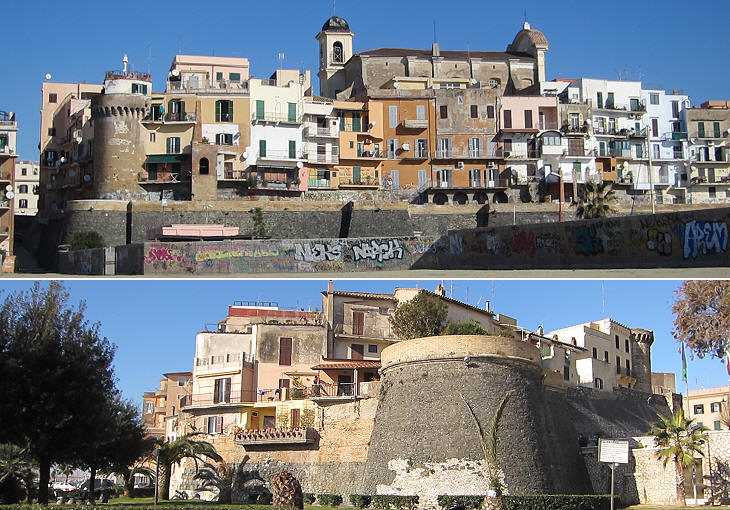 Views of the medieval burg and of its fortifications

Both noble female beauty and unique national character adorn the little town of Nettuno, which stands picturesquely upon the eastern shore, the black walls of its castle sinking down into the waves. One reaches it in three quarters of an hour, by a straight well-made road from Porto d'Anzio, one of the most beautiful on this coast. Gregorovius
Gregorovius and his friend first reached Nettuno, a small town three miles east of Anzio; it was located on the sea, but it did not have a harbour; its economy was based on farming. Nettuno was most likely built by inhabitants of ancient Anzio who fortified a temple dedicated to Neptune, which stood on the site of Chiesa Collegiata, the main church; the town was surrounded by walls with towers and a circular bastion built by Pope Urban VIII. 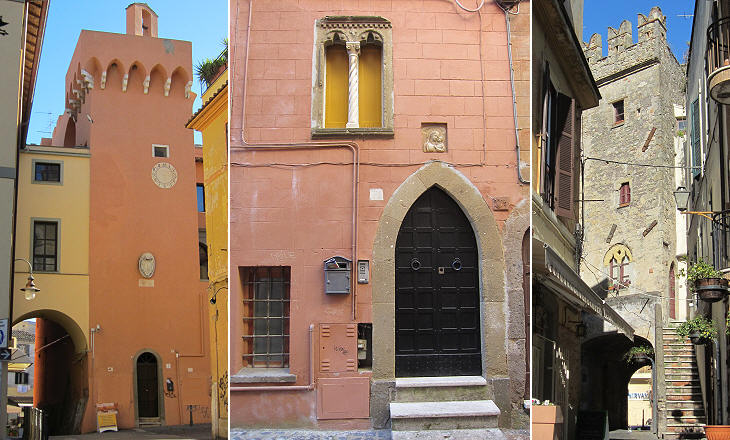 The medieval burg retains several picturesque buildings which reflect the various phases of the history of the town; in addition to the fortifications on the seaside high towers protected the gates on the opposite side. 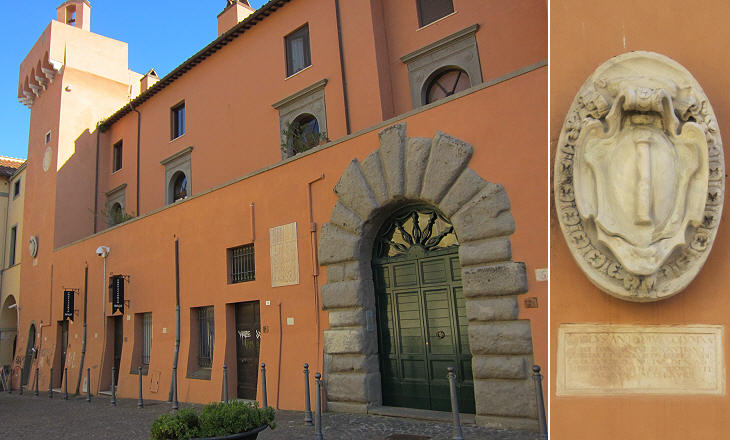 In 1426 the Colonna acquired the fiefdom of Nettuno and retained it until 1596 with the exception of short intervals in 1501-1503 when Pope Alexander VI confiscated the possessions of the Colonna and in 1556-1559 when Pope Paul IV did the same. In 1569 Marcantonio II Colonna enlarged the family palace and strengthened its fortifications. (left) Palazzo Orsini Colonna: heraldic symbols of the Orsini together with heraldic symbols of other fiefdoms which belonged to Nicola Orsini di Nola (1331-1399); (centre) coat of arms of Cardinal Pier Donato Cesi on the bastion built by Pope Urban VIII; (right) coat of arms of Prince Camillo Pamphilj, nephew of Pope Innocent X, and his wife Olimpia Aldobrandini above the entrance to Palazzo Pamphilj

Prior to the Colonna, Nettuno belonged to a Neapolitan branch of the Orsini; Nicola Orsini supported Cardinal Gil Alvarez de Albornoz in restoring papal authority in Italy. In 1596 the Colonna sold their fiefdom to the state; soon after the Cesi, a family with several possessions in Umbria, built a small casino with a view of the beach and promoted the construction of a bastion at the eastern end of the town; their property was bought by the Pamphilj who enlarged it and retained it until 1834 when they sold it to the Borghese. At the beginning of the XVIIIth century many important Roman families built villas between Nettuno and Anzio; among them the Corsini, the family of Pope Clement XII, who in 1738 promoted the construction of a new large church which replaced a medieval one; it was designed by Carlo Marchionni, but during the construction some expensive details were omitted. Interesting paintings can be found at S. Francesco, a small church immediately outside the fortified town. 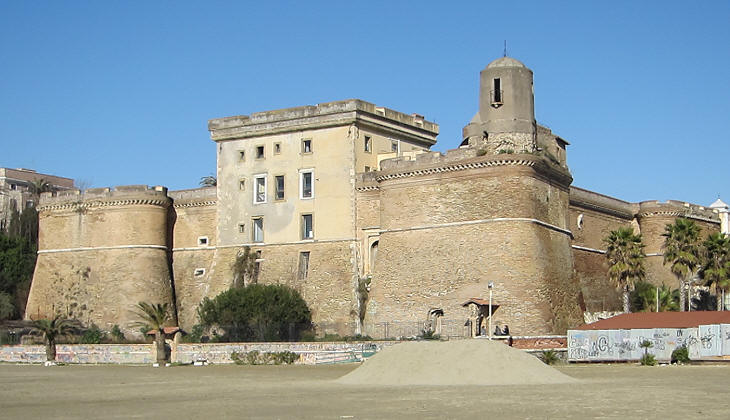 After having confiscated Nettuno, Pope Alexander VI and his son Valentino Borgia ordered the construction of a state-of-the-art fortress near the walled town, but not adjoining it; the design of the fortress is attributed to Antonio da Sangallo the Elder, who designed fortresses for the Pope at Nepi and Civita Castellana and who strengthened Castel Sant'Angelo. The construction of the fortress was justified by the increased threat of Ottoman corsair raids; in that same period and for the same reason a fortress was built at a small burg near ancient Ostia. 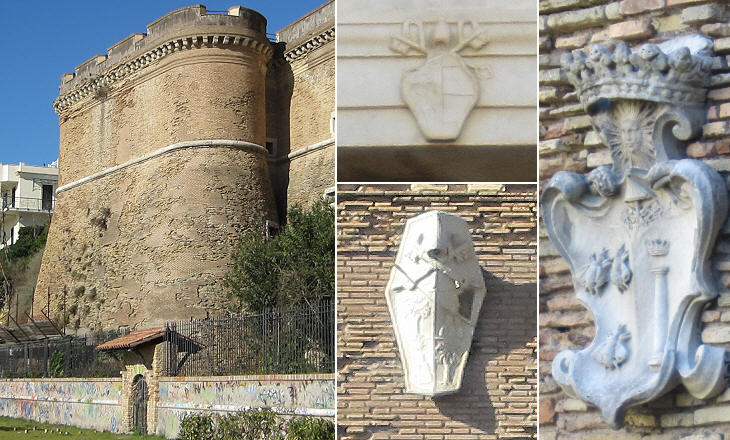 Several coats of arms show the interest of the popes in strengthening this fortress; the image used as background for this page shows the coat of arms of Pope Alexander VI. 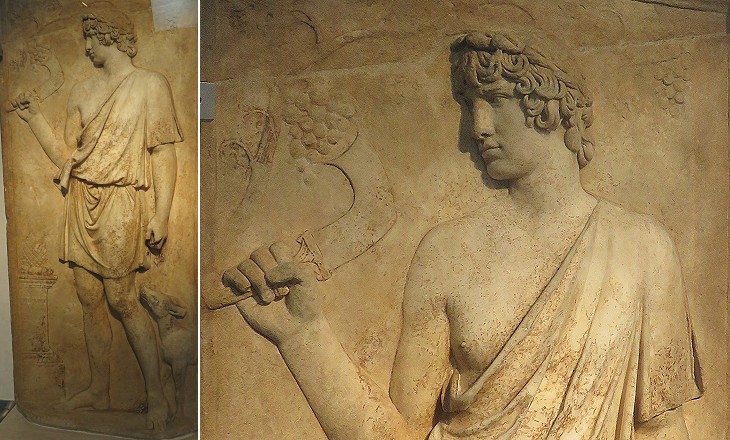 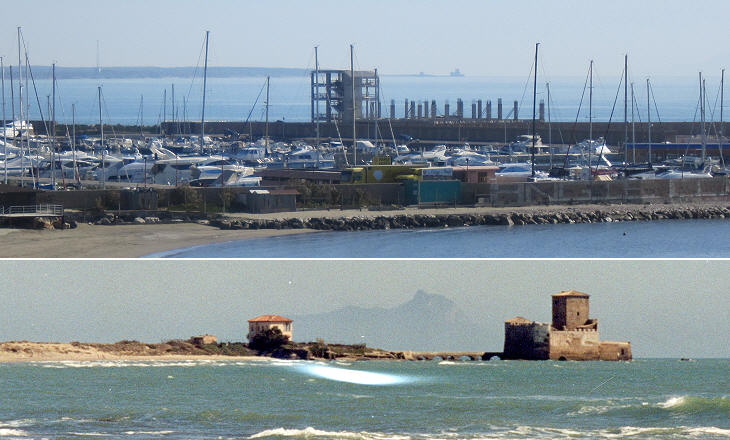 (above) View of Torre Astura from Nettuno (in the foreground the modern marina of the town); (below) Torre Astura and behind it Monte Circello (Circeo), the assumed home of sorceress Circe where Ulysses stayed for one year

The name of Torre Astura is associated with Conradin of Swabia, the last of the Hohenstaufen. In 1267, at the age of fifteen, Conradin tried to regain control of southern Italy, which his uncle Manfred had lost in 1266, after having been defeated at Benevento by Charles of Anjou.
Conradin, with limited resources from Germany and a few very young followers stayed for a while in northern Italy until Pisa provided him with support for his attempt. Conradin entered Rome, abandoned by Pope Clement IV who preferred to stay in safer Viterbo, and he received some additional help from powerful Roman families; in August 1268, near Tagliacozzo in the Abruzzo region, his army initially defeated the Angevins of King Charles; Conradin dispersed his forces to follow the fugitives, but Charles kept a group of cavalrymen as a reserve and threw them onto the battlefield at this point and won the battle.
Conradin managed to escape, reached Rome and tried to go back to Pisa by sea: in this attempt he came to Torre Astura, a small castle of the Frangipane, then a very important Roman family. Giovanni Frangipane at first was inclined to help Conradin, but the emissaries of Charles reached him and, after a few days of uncertainty, he handed over Conradin and his young friends to their enemy.
On October 29, after a mock trial, Conradin was beheaded in Naples; he was buried there in S. Maria del Carmine; because of his death at such a young age Conradin became an icon of the German nation; in 1847 a monument based on a project by Bertel Thorvaldsen was erected in this Neapolitan church by Maximilian, crown prince of Bavaria.

All sign of civilized life ceases with Nettuno, for immediately behind the town begins the Pontine wilderness. The brushwood extends from this to Terracina. Not a single human dwelling exists again upon the coast, only solitary towers rise out of the romantic solitude, at distances of about two miles from one another. The melancholy desolation of this shore and the impressiveness of its time-honoured solitude is great. One feels as if one were no longer on the classic shore of Italy, one seems to be wandering on the wild coasts of the Indian America. The constant murmur of the sighing sea-waves, the summer breeze breathing over the ever-smooth, ever-white-sanded shore, the endless deep green wood, which follows the sea on and on at a hundred paces distant, the shrill cry of the hawks and falcons, the quiet and high-hovering eagle, the stamping and bellowing of the herds of wild cattle, air, colour, sound, every existence and element is in unison with the most entire impression of an old-world wilderness. Gregorovius 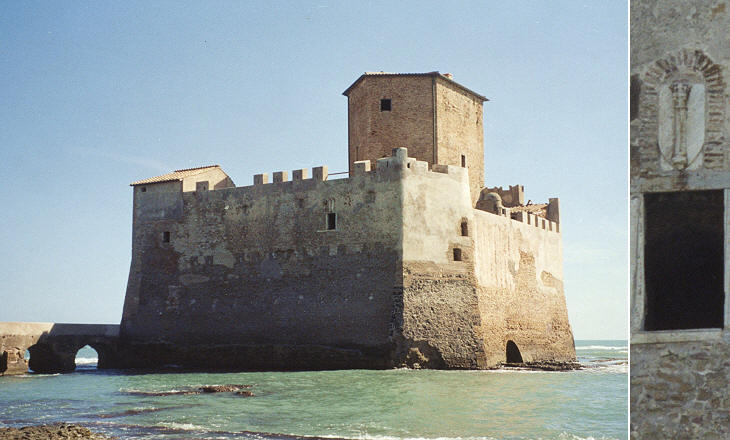 (left) Torre Astura; (right) coat of arms of the Colonna

Torre Astura is very small: the tower goes back to the XIIIth century, the outer walls were built by the Colonna in the XVIth century; it rests on the ruins of an ancient Roman villa which are in part below the current sea level (Cicero had a villa in this location). 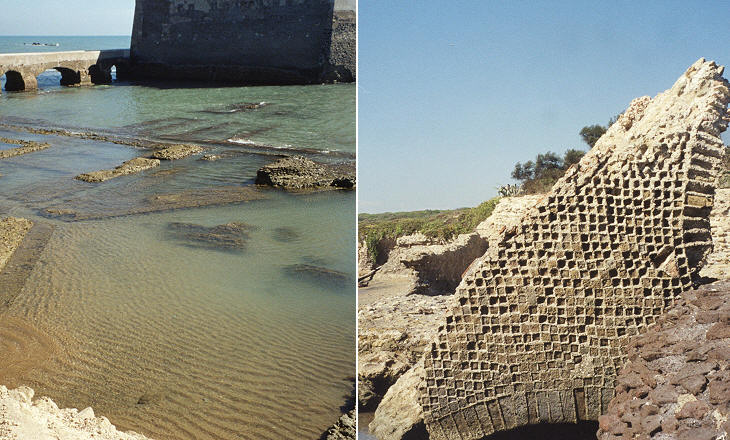 Ruins of a Roman villa

Gregorovius and his friend moved along the beach towards Torre Astura; in his account of the visit to Torre Astura Gregorovius quoted Philip Schaff's History of the Christian Church: The fate of young Conradin was not forgotten. Three centuries later it played its part in the memories of the German nation, and through the pictures of his execution distributed in Martin Luther's writings contributed to strengthen the hand of the Protestant Reformer in his struggle with the papacy, which did not fail.
The fate of Conradin inspired many poets, including Dante; here below two XIXth century poems dedicated to the young Emperor.