- Segni
(detail of a fresco at S. Onofrio) 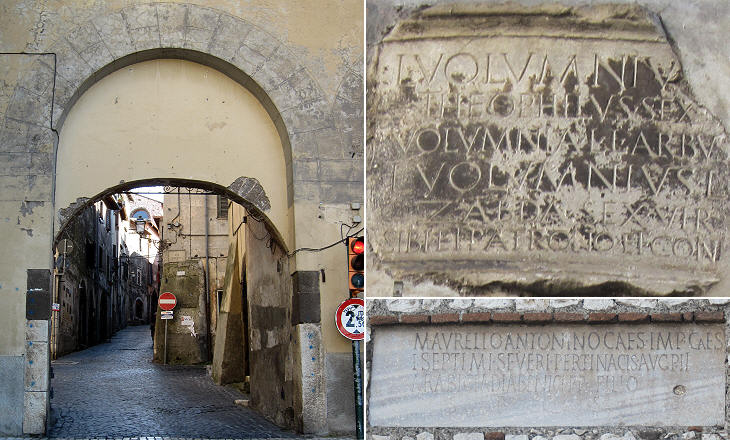 Having crossed the Sacco near Valmontone, we began to ascend, continuing to do so till Segni was reached. As we rode over the foothills of the Volscian range we saw Fortino to the right, Gavignano on a pleasant eminence to the left. The road is a little monotonous, climbing always higher into the mountains; as we wound up, the classic plains of Latium spread out more and more beautifully at our feet, sad and grand, each hill crowned with its castle, and all shut in by the blue Apennines. (..) I rode in by the Porta Maggiore, hoping to find an inn. This is the only gate to enter by; here alone is it accessible, precipitous cliffs guarding it everywhere else. The gate rests against the Cyclopean wall, and above it is a huge edifice which once dominated the town, the Palace of the Conti.
Ferdinand Gregorovius - Aus den Bergen der Volsker -From the Volscian Mountains - 1860 - English translation by Dorothea Roberts.
In the XIXth century Segni occupied only a part of the site of ancient Signia, a town on the northern side of the Volsci Mountains which according to tradition was conquered (or founded) by Tarquinius the Proud, the last Roman king in 513 BC. Ancient Roman inscriptions and fragments of reliefs can be seen on the walls of many buildings of the town. 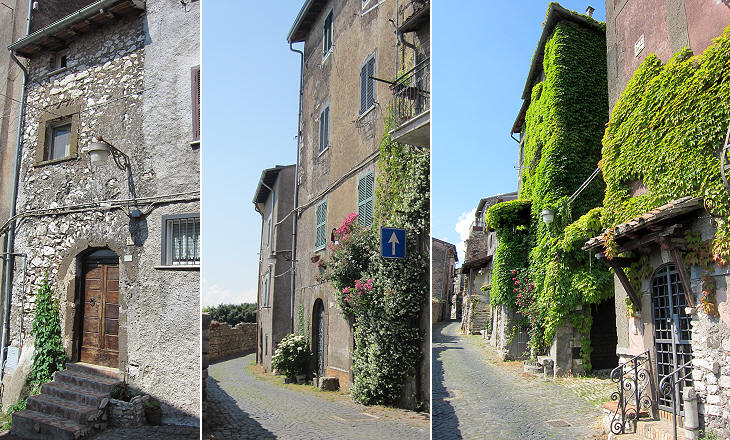 No cathedral or fortress breaks the uniformity of its rows of low houses. I had fondly imagined I should find it an ancient place, filled with old monuments, but I was disillusioned. The towns in Latium proper bear the stamp of the Middle Ages, but this old Signia looks desolate, sad, with no historical interest. (..) I found Segni grey and monotonous; not a garden, not a tree, breaks its uniformity; its limestone is dull in its hue. (..) If we except Cori, which is not so far from Rome, the Volscian towns have all a forlorn, poverty-stricken, and deserted aspect. Gregorovius
The German writer was impressed by the poor houses he saw in Segni; they were built with white calcareous stones mixed with black tufo which overall gave them a grey colour; today most external walls have been covered by an outer layer, while flowers and climbing plants give the houses a bright appearance. 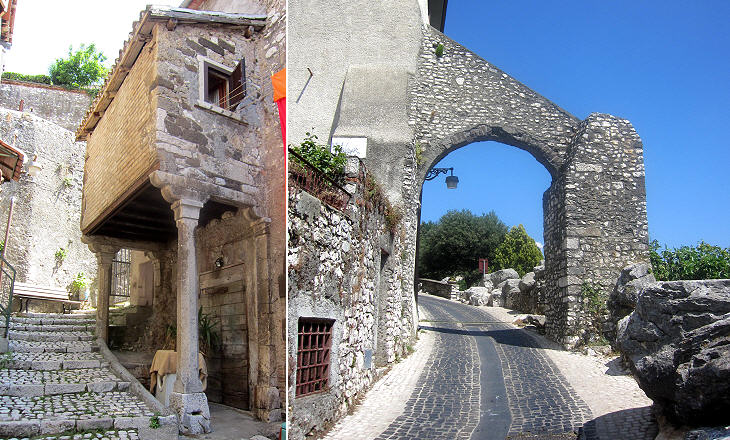 Similar to nearby Montefortino, Segni was plundered by the troops of Pope Paul IV in 1557, but it still retains some medieval buildings.
Ponte Scarabeo is a medieval arch built between a house and the ancient Roman walls; its unusual name is associated with a tale about a scarab donated by a Carthaginian prince to a local girl. 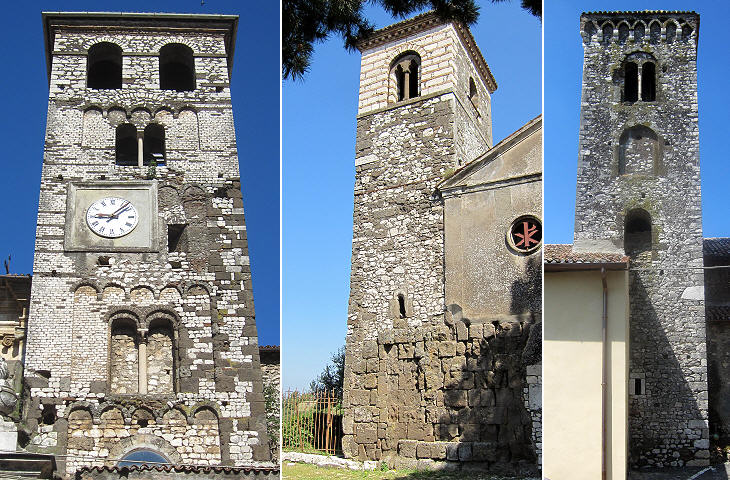 The Conti, ancestors of Innocent III, Gregory IX, and Alexander IV, and their families were the lords of Segni. After the reassertion of the Roman independence in 1143, the Pontiffs were often obliged to fly from the hatred and persecution of the Roman people to their strongholds in the Campagna. (..) Innocent III was born in his father's palace at Segni. He and Alexander III and Lucius III all resided there at intervals. Gregorovius
The Romanesque bell towers of Segni are a sign of the importance acquired by the town in the XIIth and XIIIth centuries when several popes resided there for a short time; in 1198 Lotario dei Conti di Segni, a member of the family which ruled Segni, became Pope Innocent III, one of the most important popes of the Middle Ages and a keen asserter of the supremacy of the popes over kings and emperors. 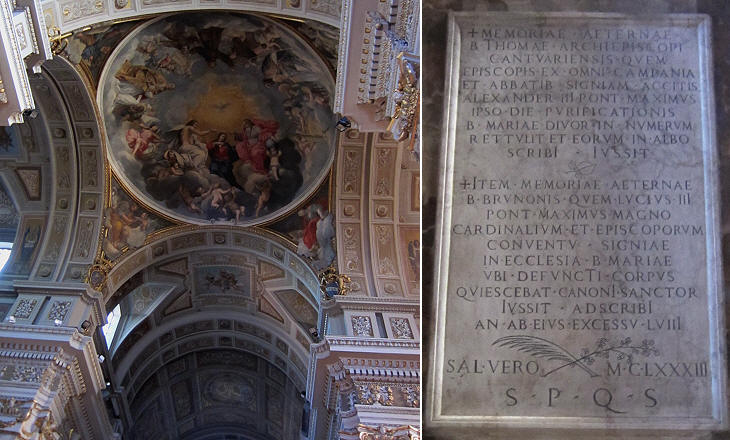 When I have got hold of the geography of these Campagna towns, I visit, as a rule, the cathedral, which is the historic museum of the place, and it is seldom that I fail to discover in it some relic of the Middle Ages. (..) I was building on this cathedral at Segni, for it has been a Bishop's See ever since the year 499, but a modern edifice confronted me, decorated, after the present Roman fashion, with an exuberant painted cupola which it dislocated one's neck to look up at. Gregorovius
The cathedral of Segni was entirely redesigned in 1626-1657 in a period during which several families competed for the control over the town which eventually was assigned to the Sforza Cesarini (who had another fiefdom at Genzano in the Alban Hills).
An inscription was placed in the new building to celebrate two events which had occurred in the medieval church: in 1173 Pope Alexander III canonized Thomas Becket and in 1183 his successor Pope Lucius III canonized Bruno of Cologne. These two popes were able to reside in Rome only for short periods as the city was hostile to them; they often stayed at Anagni and Velletri, but occasionally also in Segni. 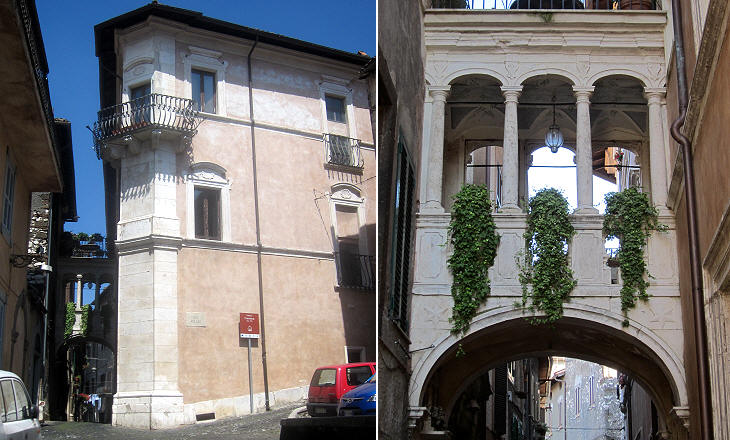 The Sforza Cesarini were more interested in the Roman theatrical life (they built Teatro Argentina) and in the development and embellishment of Genzano than in living in Segni; for this reason Palazzo Cremona is the only XVIIIth century building which stands out from the grey houses of Segni because of its elegant loggia which connects to the building across the street. 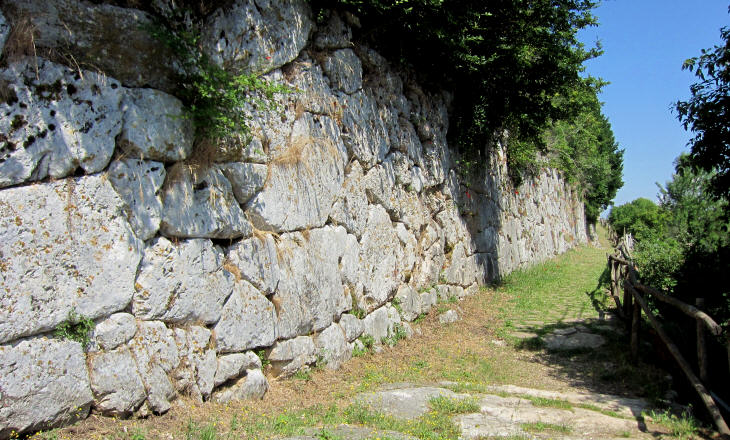 The air felt cool, almost sharp; wild roses, tall brown grasses, sprays of golden broom waved in the breeze to and fro. The spirit of a primeval world - a grand, awe inspiring, prehistoric world - broods over the weather-worn Cyclopean masses which form these ancient walls. I climbed up to examine them, far-famed as they are. As in all the other Latian towns, their long lines encircle the arx or Citadel set on these mountain precipices. Their gigantic blocks are as closely fitted into each other as if the architect who placed them there had been at work only yesterday. Gregorovius
Because of its walls and gates Segni is twinned with Mycenae, one of the major towns of Ancient Greece in the period 1600-1100 BC. The walls of Segni however are not as old as those of Mycenae: it is now believed that they were built after the Roman conquest; they are called polygonal walls for the shape of their stones, but Gregorovius preferred to use the term cyclopean, which was utilized by Pliny to mean that only those mythical giants could have moved these boulders. 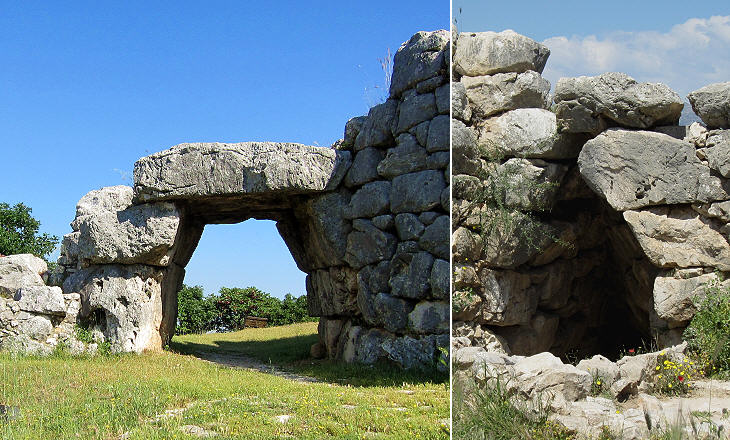 A low Etruscan gateway has here and there been broken out through their massive bulk. The original Cyclopean gate of the town is still in use. It is composed of huge blocks of dressed stone leaning towards each other at the top of the opening, with a great lintel stone covering them in. The colossal size of these walls, their surface worn by the storms of thousands of years, the wild growths which garland them, the immense strength of the rocks which they crown, the vast scale of all their surroundings excite emotions which it is quite impossible to put into words. Gregorovius
This gate was called Porta Saracena after a Saracen (Arab) raid; these raids were not limited to towns on the coast, but reached sites very far from the sea.
Porta Saracena consists of a corbel arch closed by an enormous boulder; it has been compared to the Lion Gate of Mycenae, but a more appropriate comparison would be with other corbel arches at Mycenae and Tiryns. 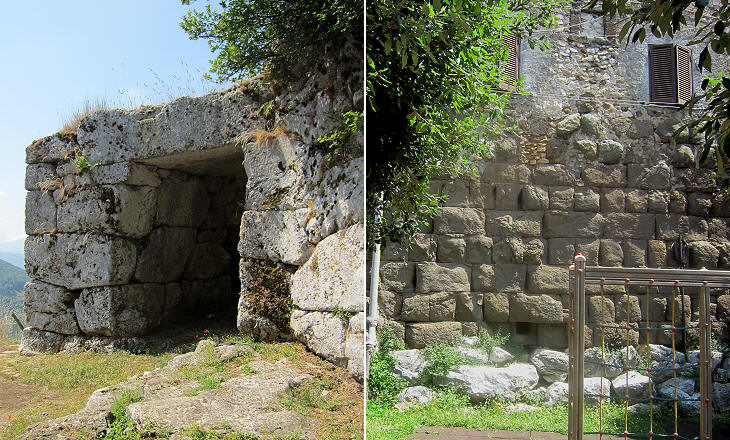 The name given to this other ancient gate, in the lack of more plausible explanations, is thought to be a reference to Byzantine Emperor Phocas to whom a column was dedicated in the Roman Forum.
Segni has also sections of ancient walls built at a later time and which were aimed at supporting some small terraces (similar to those which can be seen at Cori). 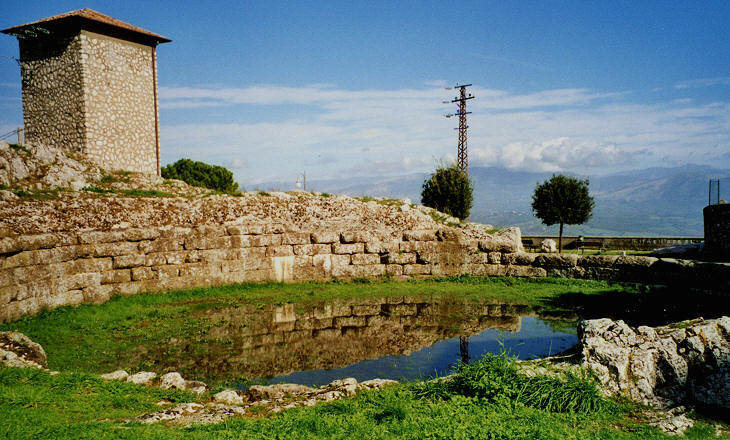 On the highest ground in the town, close by the Church of San Pietro stood the Volscian Cyclopean Fortress in days of old. On that eminence, dominating the whole of Latium, were seated the Citadel and temple of the ancient Signia, of which but few fragments now remain; a circular cistern is amongst these. This platform is a favourite resort of the townsfolk, who stroll about on what resembles a huge stone table supported by prehistoric walls, and set amongst grey rocks overgrown with moss and wild flowers. Nothing can be more original than this promenade, up in the clouds, and in such a grand and rocky region. Gregorovius
A large Roman cistern was still utilized when Gregorovius visited Segni; Pliny the Elder (Historia Naturalis - Book 35 - XLVI) mentioned the town for opus signinum, a particular mode of flooring made of tiles broken up into very small pieces, mixed with mortar and turned into a paste which had impermeable properties and was used for aqueducts, pools and cisterns (more on Roman construction techniques). 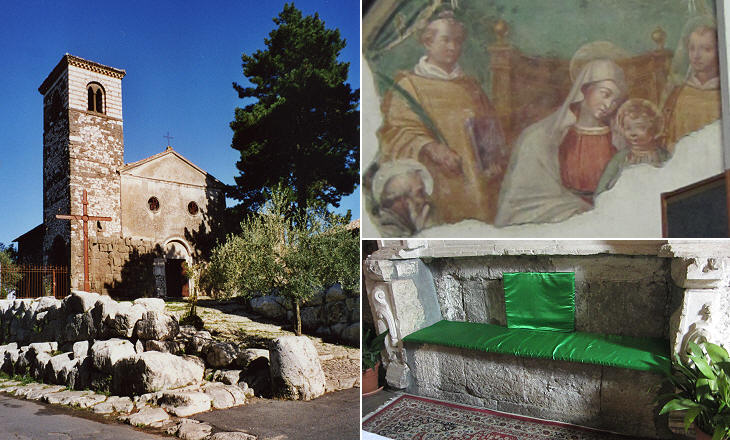 (left) S. Pietro on the ancient acropolis; (right-above) XIIIth century fresco; (right-below) stones of the cell of a temple behind the altar

On the acropolis archaeologists have identified a temple of the IIIrd century BC which replaced a previous temple dedicated to Juno Moneta; this epithet of Juno meant she was worshipped as protectress of funds; eventually the epithet became a noun from which the word money derives. A church was built inside the cell of the temple; in 1965 some medieval frescoes were discovered behind later additions.
Gregorovius was at the acropolis on a Sunday evening and he watched the inhabitants of Segni who reached the site wearing their best suits, enjoying the breeze and the view over Anagni which is located on the other side of the valley of the River Sacco. 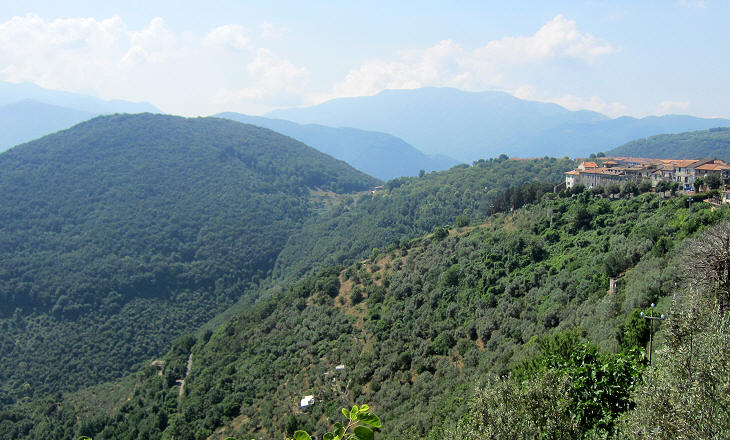 Sheer down fell the rock into the Latian plains below, where in a glance you behold more provinces, cities, mountains than it is possible to enumerate, each rich in historical memories, classic associations, and poetic myths. Gregorovius
Gregorovius enjoyed a dinner at the only inn of Segni; in his account he praised the local wine, although he knew that Martial (XIII. Ep. 116) warned about its astringent effects: Potabis liquidum Signina morantia ventrem? / ne nimium sistas, sit tibi parca sitis (Will you drink Signine that constricts relaxed bowels ? That you may not check them too much, let your thirst be sparing - translation by Walter C. A. Ker).
On the next day Gregorovius and his friend were ready to cross the Volsci Mountains (with the help of a local guide) to reach Norma (but you may wish to see Carpineto first).