- Anzio
(detail of a fresco at S. Onofrio; this page is also part of Giuseppe Vasi's Environs of Rome description)

On the Latin Shores

This page is based on Idyllen vom Lateinischen Ufer, a description of the shores of Latium near the town of Anzio by Ferdinand Gregorovius, a German historian who lived in Rome for 22 years.
On June 24, 1854 Gregorovius left Rome from Porta S. Giovanni; the journey to Anzio took five hours: the last two hours were spent crossing a thick wood which at the time was a brigands' favourite retreat.
Gregorovius had already seen the shores of Naples and Sicily, so at first he found the low coast around Anzio rather disappointing, although it reminded him of the dunes of the Baltic Sea in his country; day after day his feelings changed and he fell in love with this corner of Italy and with the memories of the past it retained. 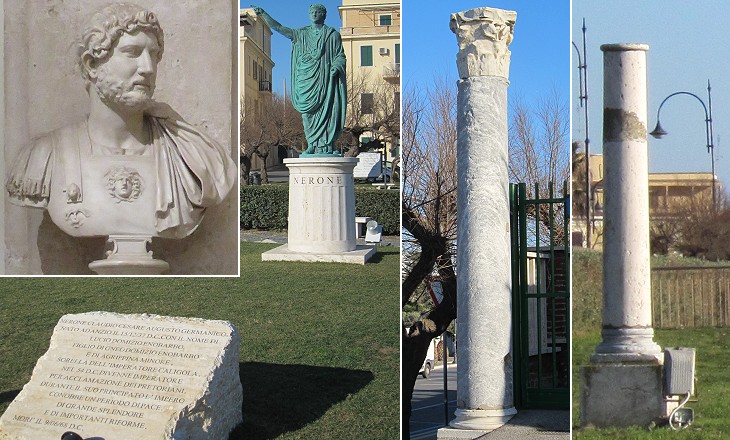 In 68 AD the Roman Senate declared Nero hostis (enemy) of the Republic and after his death all references to him, such as statues and inscriptions were removed. Yet in recent years historians have made a less negative assessment of the policies pursued by the Emperor and in 2010 the authorities of Anzio built a monument to their most famous fellow citizen; the dedicatory inscription highlights that during the reign of Nero the Roman Empire saw a long period of peace and growth. 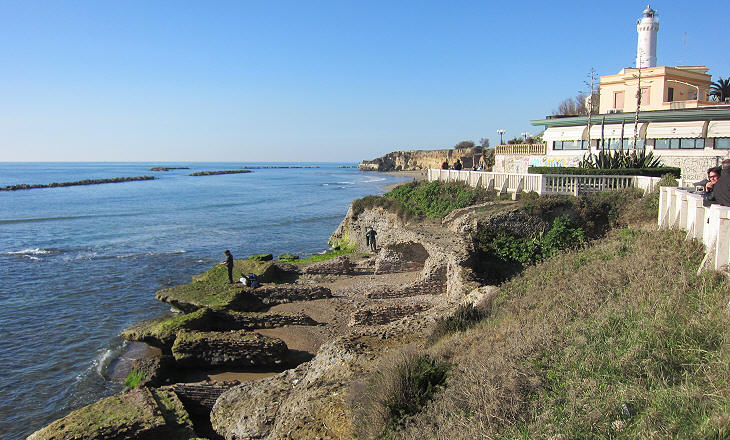 The archaeological site which today is referred to as Villa di Nerone is actually an imperial villa which was inhabited almost continuously from the time of Emperor Augustus to that of Emperor Septimius Severus; it faced south-west in order to enjoy sunlight and the sea breeze; it was preceded by a large harbour, the wharfs of which are today under sea level. It was not the only villa in the area, as Cicero also had a villa not far away (probably at Torre Astura). During the Renaissance several ancient statues were found in these villas, the best known being a statue of Apollo called del Belvedere, because it was placed in that residence of the popes; during his walks along the beach Gregorovius noted many fragments of the marbles which decorated the Roman villas. 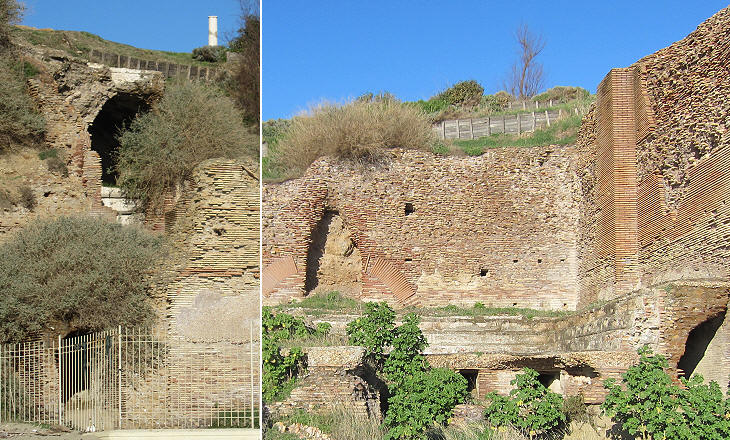 Antium (ancient Anzio) was famous for a sanctuary to Fortuna (the personification of luck), which rivalled that of Praeneste (Palestrina). 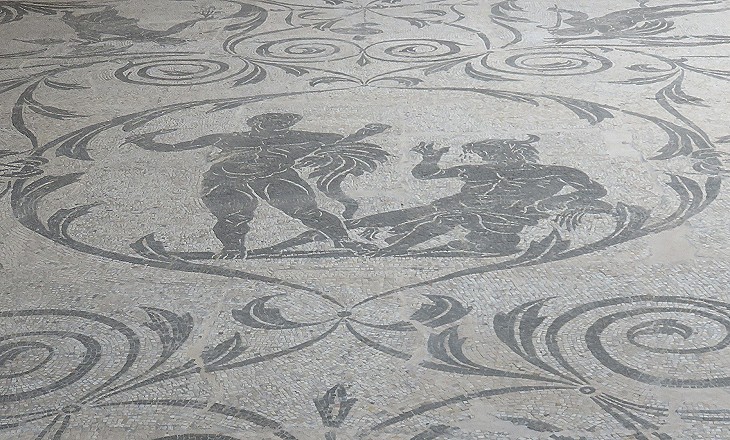 The sanctuary was quoted by Horace (Odes - I-XXXV)

Archaeologists have not been able to identify the site of this sanctuary, which was probably located to the east of Antium towards Nettuno. 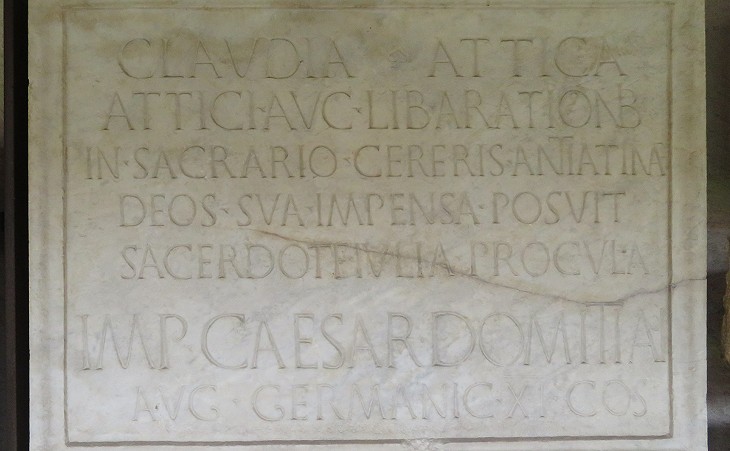 Museo Lapidario Maffeiano di Verona: inscription celebrating the donation of statues to the temple of Ceres Antiatina by Claudia Attica, wife of Atticus, freedman of Emperor Domitian who was in charge of the treasury

The inscription is the only evidence of another temple of the town. It also shows the wealth which freedmen could achieve at the court of Domitian, something which eventually led to the hostility of the Senate towards the Emperor. 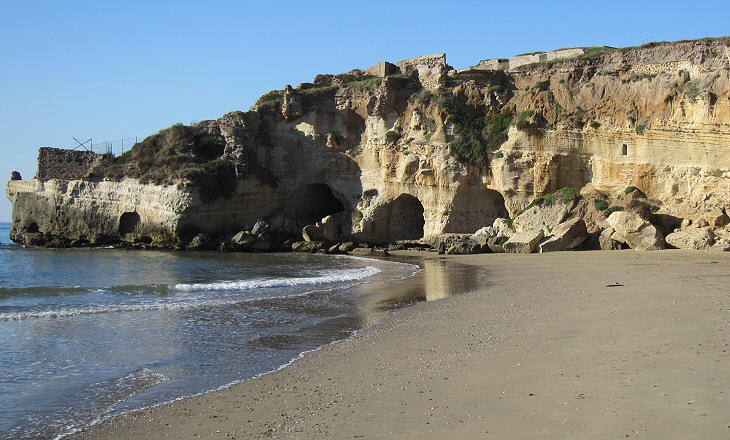 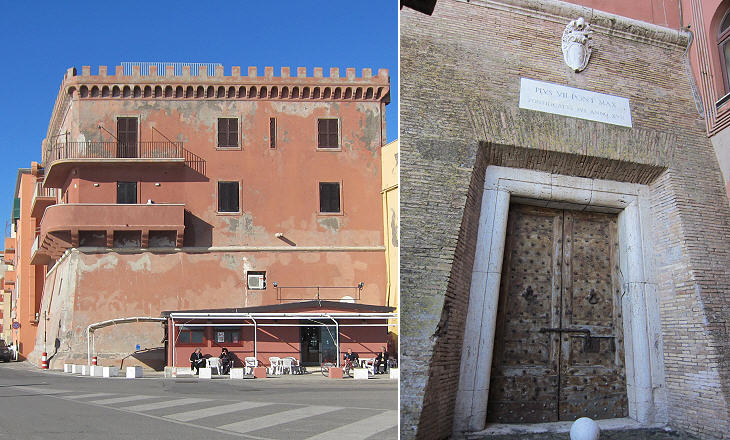 (left) Small castle which protected the harbour; (right) entrance to the castle with coat of arms and inscription celebrating a restoration by Pope Pius VII

At length, when a dreadful succession of Lombards, Franks, and Saracens destroyed the houses, pavements, drains, crops, plantations, and cattle which had protected the Campagna from mephitism, it then returned to its own vicious propensity; for both the form of its surface and the order of its soils promote the stagnation of water. (..) This malaria (as the people here call it) is an evil more active than the Romans, and continues to increase in spite of all the science which they publish against it.
Joseph Forsyth - Remarks on Antiquities, Arts, and Letters in Italy in 1802-1803
After the fall of the Roman Empire the villas were abandoned and the harbour was no longer maintained; marshes developed along the coast and the area became unhealthy because of malaria. In 1698 Pope Innocent XII built a new small harbour to the east of the ancient one and set up a penal colony to provide the workforce for dredging the sea floor. Gregorovius wrote that many of the inmates used to remain at Anzio after they had served their sentence, so that the population, similar to Australia, mainly originated from the presence of the penal colony. Fishing was the main economic resource of Anzio, but the locals were not fishermen, who instead came from Naples and Ischia. 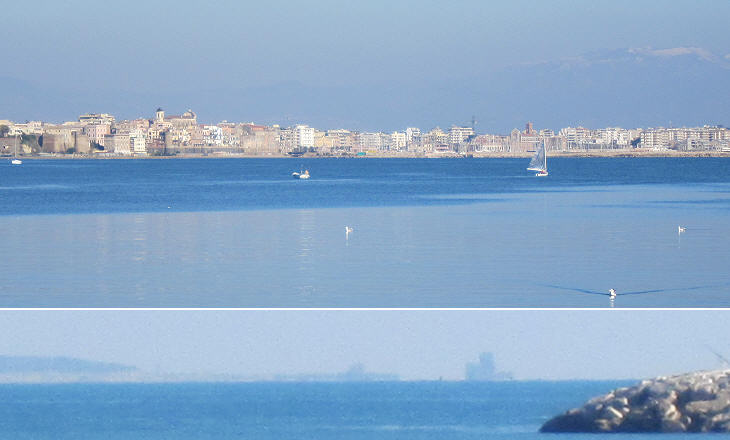 When you sit in the window of your chamber, before which the Neapolitan fishermen are seated on the white sands mending their nets, the whole of the glorious gulf stretches before you, and you see the lovely shore as far as the Circean promontory. On the coast near Anzio rises the noble villa of Prince Borghese in a wild park of ilexes and olive-trees, further off are the castle and town of Nettuno, brown and picturesque, built into the sea, and celebrated through all the world for the beauty of its women, and their splendid costume. Gregorovius
From the new harbour of Anzio Gregorovius enjoyed a commanding view over the coast of southern Latium, which at the time, exception made for the fortress and the medieval burg of Nettuno, was totally unpopulated. Notwithstanding the desolation of the site, Gregorovius was fascinated by seeing Torre Astura, where in 1268 Conradin of Swabia, the last German emperor of the Hohenstaufen family, was betrayed and handed over to Charles I of Anjou; on a clear day Gregorovius could see Monte Circello (today Circeo) further down the coast, the mythological home of the sorceress Circe, where Ulysses spent a year before deciding to return to Ithaca. 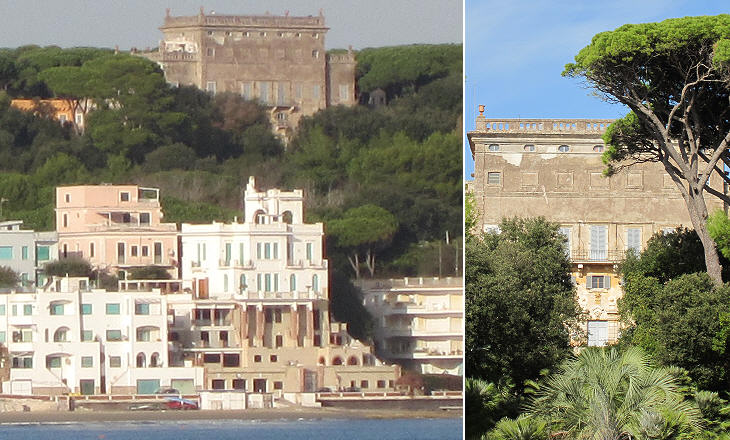 In 1648 Anzio was again chosen as the site of a summer residence by Cardinal Vincenzo Costaguti who built a villa at the centre of a large wood to the east of the abandoned port; in 1698 the Costaguti hosted Pope Innocent XII when he came to Anzio to follow the construction of the new harbour. The main building, due to the risk of corsair raids, is more similar to a fortress than to the elegant casinos which decorated the villas near Rome. 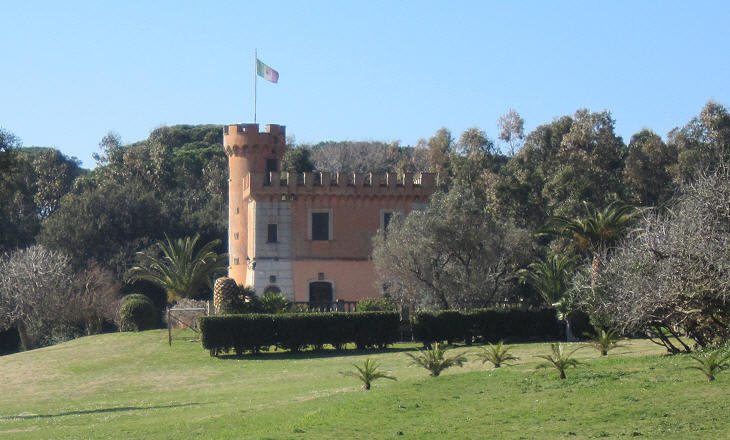 In 1831 Prince Camillo Borghese acquired the estate, which still belongs to the family; a section of the park which includes a much renovated watch tower today houses wedding parties and other events. The Borghese had already a castle at Pratica di Mare, north of Anzio.
The image in the background of this page shows the heraldic symbols of the Borghese. 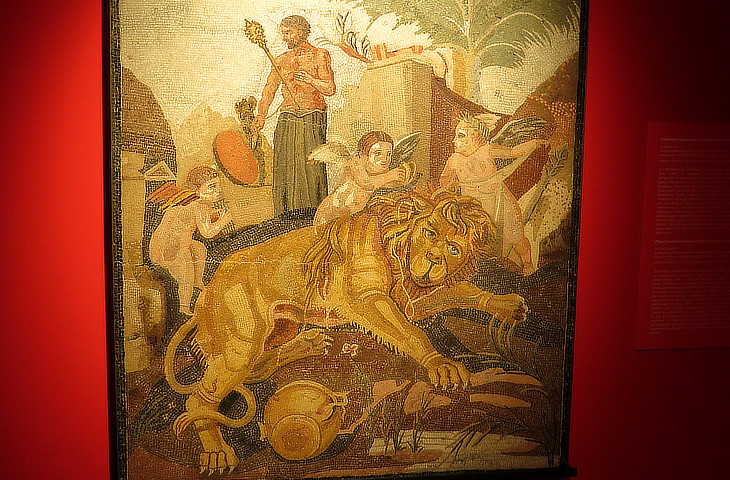 In 1737 Giuseppe Alessandro Furietti, a prelate, found a fine small mosaic at Villa Adriana which fit a description by Pliny of a famous work by Sosus at Pergamum. Furietti in 1752 published De Musivis, a book on ancient mosaics which raised the general interest in this form of art and in particular in the emblemata, small figurative sections at the centre of the floor (see an example at Brescia). In line with the usage of the time the mosaic from Anzio was heavily restored: the man holding a distaff in the upper part of the mosaic was added to give a mythological significance to the scene; he represents Hercules who spent one year as slave of Queen Omphale and during that period was tasked with typical female activities. This because the lower (original) part of the mosaic showed a drunken lion (possibly a symbol of Hercules) being taken care of by cupids (symbols of love). According to Diodorus Siculus Hercules led a life of pleasure and servitude in the arms of Queen Omphale. 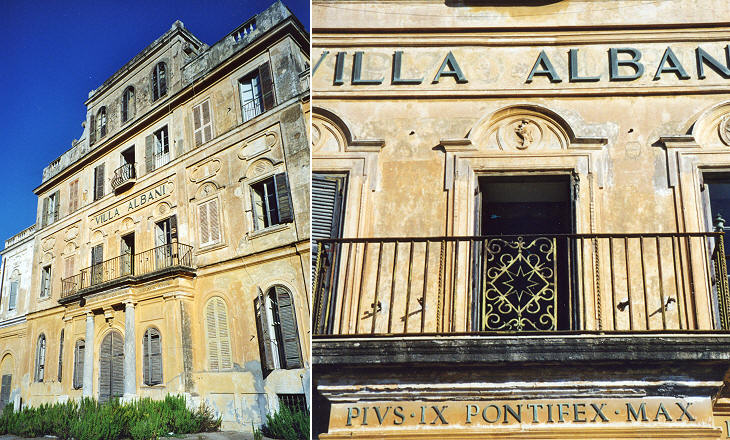 (left) Façade of Villa Albani; (right) detail showing the heraldic symbols of Pope Clement XI (a star on the railing) and of Pope Pius IX (a rampant lion on the lintel)

After the completion of the new harbour Anzio reverted to being a holiday resort for the richest Roman families; their villas were built at a certain distance from the coastline and on high ground in order to reduce the risk of malaria and they were used just for a short period in spring and early summer before the heat spread the disease.
In the 1720s Cardinal Alessandro Albani, nephew of Pope Clement XI, who was a keen collector of ancient statues, bought a large property near Villa di Nerone; the casino was perhaps designed by Alessandro Specchi; twenty years later the cardinal started to build a large suburban villa off Porta Salaria in order to arrange his collection there.
In 1852 the villa was bought by Pope Pius IX who renovated the casino and loved to spend a few weeks there in May; the pope promoted the development of Anzio and built an imposing church in the main square of the town which is still called after him. 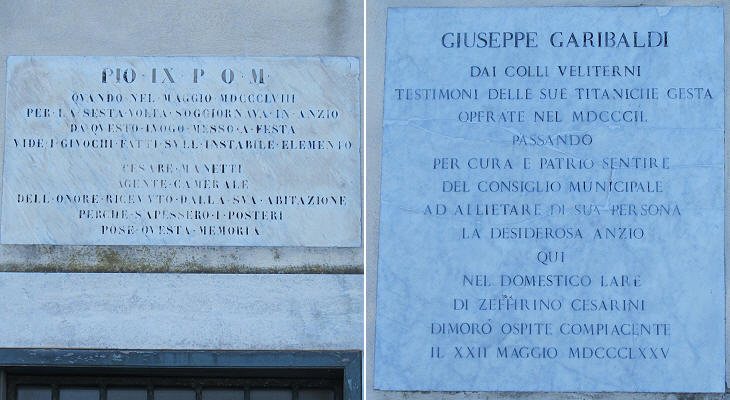 During Pope Pius IX's sojourn at Anzio, some celebrations (usually ending with fireworks) were held in the harbour. In 1858 he watched these celebrations for the sixth time from a small house, where the owner put an inscription to record the event. The temporal power of the popes came to its end in 1870 and in 1875 Giuseppe Garibaldi (a bandit in 1858 and a national hero in 1875) spent a night in the house and a second inscription celebrated the event. 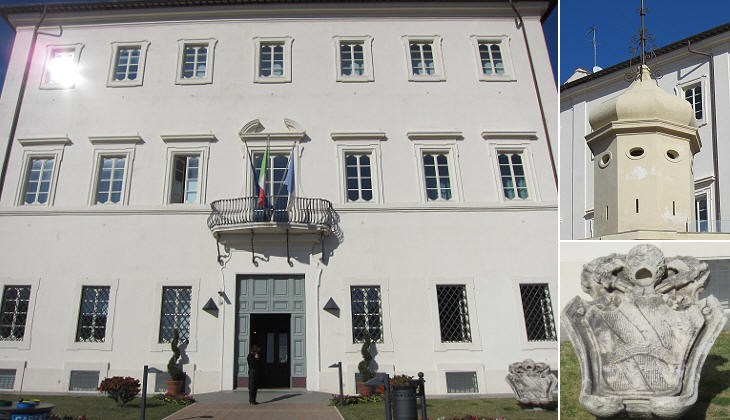 The example of Cardinal Albani was followed a few years later by Cardinal Neri Corsini, nephew of Pope Clement XII, who built his villa above the foundations of an ancient temple; in 1878 an ancient statue was found in the premises of Villa Corsini; it portrays a young woman, but archaeologists have been unable to identify her as a goddess or person of historical importance; it is therefore known as La Fanciulla di Anzio (The Girl from Anzio). 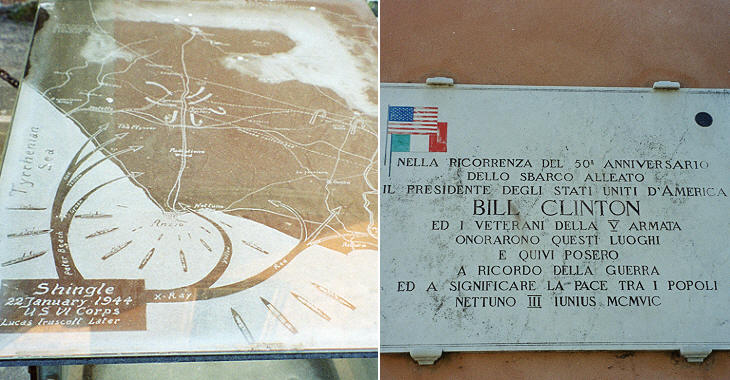 (left) Map of the 1944 landings in the harbour; (right) inscription celebrating the 50th anniversary; ceremonies were attended by President Bill Clinton

Operation Shingle, the landings of Allied troops at Anzio and Nettuno in January 1944, had the objective of hastening the liberation of Rome; the landings were successful, but the overall operation ended in stalemate and only in May the forces in the bridgehead were able to make a common front with those arriving from the south where they had been stuck for months before managing to conquer Montecassino. The Allies made their entrance into Rome on June 5. Large war cemeteries at Anzio and Nettuno are evidence of the fierce fights which took place in the area and which caused more than 12,000 deaths.

Move to part two: Nettuno and Torre Astura or make an excursion to Pratica di Mare (Lavinium) or to Ardea.