Spoleto - The Cathedral
(relief of a tabernacle in S. Gregorio Maggiore)

You may wish to see a page on medieval Spoleto first. 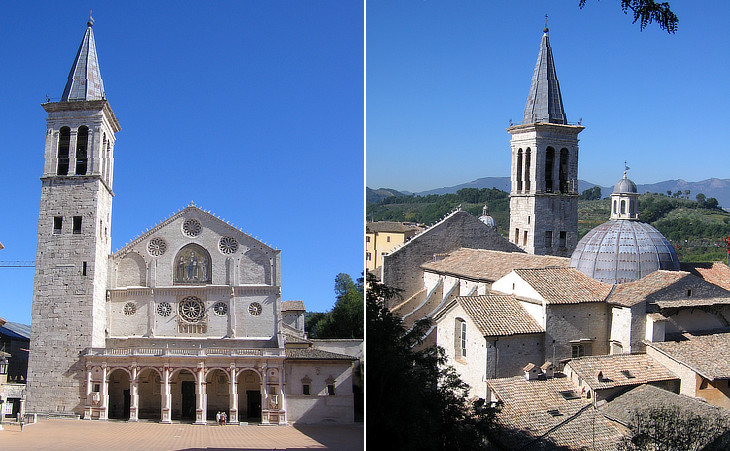 Cathedral: (left) façade; (right) the building seen from a promenade around the fortress

The cathedral, in a commanding situation, presents a front of five Gothic (?) arches, supported by Grecian pillars, and within, consists of a Latin cross, with a double range of pillars, of neat and pleasing architecture. The order is Corinthian.
John Chetwood Eustace - Classical Tour of Italy in 1802 (publ. 1813)
The cathedral of Spoleto was built at the end of the XIIth century on an existing Roman terrace in the upper part of the town. It was consecrated in 1198 by Pope Innocent III. The cathedral is a sort of summary of Italian art as its original Romanesque structure was modified through the centuries. In particular in 1644 Luigi Arrigucci, architect of the Papal State, renovated the interior and built the dome. 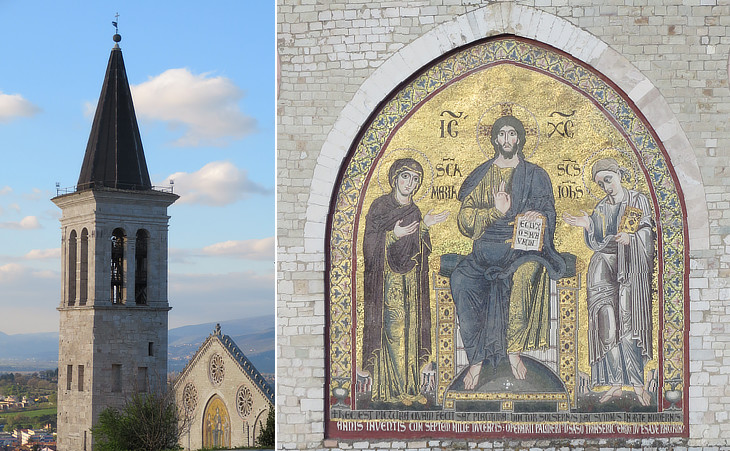 (left) Cathedral at sunset; (right) mosaic of the façade

On the Frontispiece of the Church, over the Door is a Piece of Mosaick Work, made in the Year 1207, as appears by the following Lines, "Haec est pictura quam fecit sat placitura, Doctor Solsernus hac summus in arte modernus, Annis inventis cum septem mille ducentis; Operarii Palmerius, etc." That is This Picture which will please well, was made by Doctor Solsernus, the ablest of the Moderns in this art in the Year 1207. The Workmen were Palmerius, etc.
The Travels of the Learned Father Montfaucon from Paris thro' Italy in 1698-1701
The cathedral stands in a charming piazza, against a background of mountains, and is the oldest monument of the Middle Ages in Spoleto. It was built in the year 617 by Duke Theodolapius, but during the lapse of ages it has been much restored. It is now a beautifully simple church with a Romano-Gothic tower and a façade of the thirteenth century. This façade is adorned by a great mosaic, the work of Solferino, bearing the date 1207. I noticed with surprise this early specimen of Umbrian art.
Ferdinand Gregorovius - An excursion through Sabina and Umbria in 1861 - Transl. by Dorothea Roberts
The facade must have been completed by 1207, when the mosaic of the Deesis (Greek for prayer) was executed. It depicts Christ the Redeemer with the Virgin Mary and St. John the Baptist who intercede with Him on behalf of mankind (see other Deesis at Grottaferrata and Constantinople). The blessing gesture of the hand derives from Byzantine patterns, e.g. a mosaic at Hagia Sophia.

Cathedral: detail of the medieval part of the façade

On the other side of the castle stands, on a lower level, the Cathedral of S. Maria Assunta. (..) It is in the transition style. In the gabled west-front are eight rose windows.
Augustus J. C. Hare - Days near Rome - 1875
The upper part of the façade retains its original decoration with the symbols of the Evangelists and a fine Cosmati decoration. The central rose window is placed above an architrave that is supported by small columns, two of which are replaced by male figures, similar to those which can be seen under the rose window of S. Rufino, the Cathedral of Assisi.

This is remarkable in the Cathedral of Spoleto, that there are two Pulpits on the sides of the Door, seeing the Street, that the Gospel and Epistle might be there read to the People assembled in the Street. Montfaucon
The beautiful renaissance portico, with five arches, a rich frieze, and a stone pulpit at either end, is the work of Bramante. Hare.
The portico was added in 1491 and today it is no longer attributed to Bramante, but to Antonio Barocci da Milano and Pippo di Antonio da Firenze. It was completed by two small blind arches with an elegant pulpit. 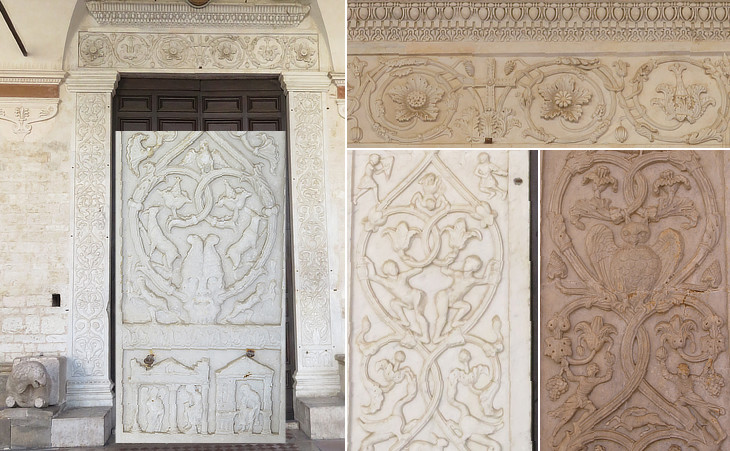 The XIIIth century portal was not replaced when the Renaissance portico was built. The decoration of the lintel is based on that at S. Salvatore. The right doorpost incorporates an older relief depicting the Annunciation and a man in a building. The decoration is very elaborate with some features which recall antiquity and others which are more typical of the Middle Ages. Overall the reliefs convey a classicizing note to the portal.

Museo del Ducato di Spoleto (in the fortress): sarcophagus of the Blessed Gregory (late XVth century - from the Cathedral) by an unknown sculptor

Blessed Gregory of Spoleto, not to be confused with St. Gregory of Spoleto, was a Franciscan monk who lived as a hermit at Monteluco and to whom many miracles were attributed. He died in 1473 and according to a later tradition a Holy Nail of the Crucifixion was found in his poor dwelling. He was buried in the Cathedral in a fine sarcophagus which does not make references to the Holy Nail neither in the relief, nor in the inscription. 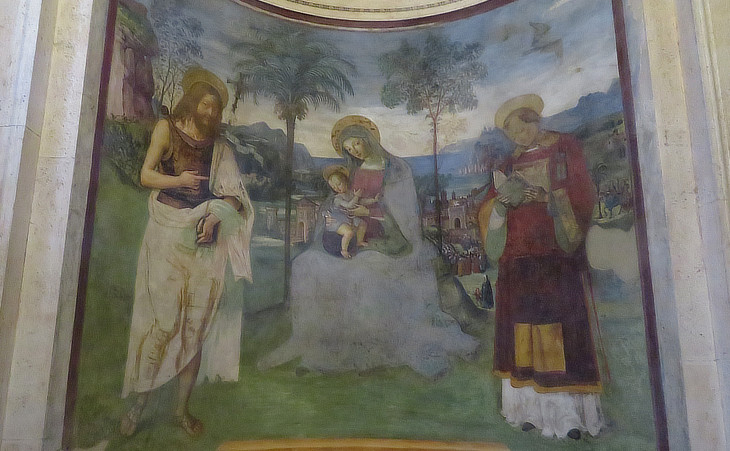 Costantino Eroli was preceded as Bishop of Spoleto by his uncle Cardinal Berardo, so the Eroli (from a noble family of Narni) were bishops of the town for almost a century. They promoted the construction of the new portico and the decoration of the apse by Filippo Lippi. Their family chapel can be accessed both from the portico and from the Cathedral via another chapel. The fresco which serves as altarpiece in the latter is attributed to Pinturicchio, a major Renaissance Umbrian painter who worked also at Rome and Siena.

Cathedral: ceiling of the apse by Filippo Lippi

Fra Filippo Lippi, one of the most pleasing of the early fifteen-century painters, has immortalised himself by the frescoes with which he has enriched the choir. He lies buried beneath it. Unluckily the rest of the interior has been entirely modernised; not even in the atrium does one mediaeval inscription remain. Gregorovius
The interior is modernized. (..) In the choir are the frescoes on which Lippi was occupied at his death. At the sides of the Death of the Virgin, the Annunciation and the Nativity are depicted. (..) In the roof of the apse the Coronation of the Virgin is represented, surrounded by angels, prophets, and sibyls. Hare
The XVIIth century renovation of the interior was careful not to damage the large frescoes which are the last work of Filippo Lippi (1406-1469), one of the main Florentine painters of his time. 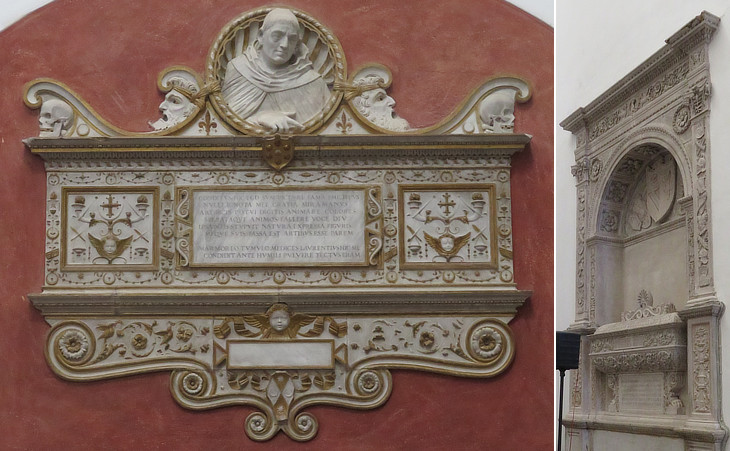 Fra Filippo Lippi was requested by the Commune of Spoleto, through the mediation of Cosimo de' Medici, to paint the chapel in their principal church (dedicated to Our Lady), which he brought very nearly to completion, working in company with Fra Diamante, when death intervened to prevent him from finishing. (..) The old man was buried in a tomb of red and white marble, which the people of Spoleto caused to be erected in the church that he had been painting. (..) Lorenzo de' Medici (..) made the journey to Spoleto, in order to demand from that community the body of Fra Filippo, to the end that it might be laid in S. Maria del Fiore in Florence; but their answer to him was that they were lacking in ornaments, and above all in distinguished men, for which reason they demanded Filippo from him as a favour in order to honour themselves, adding that since there was a vast number of famous men in Florence, nay, almost a superfluity, he should consent to do without this one; and more than this he could not obtain. It is true, indeed, that afterwards, having determined to do honour to him in the best way that he could, he sent his son Filippino to Rome (..) and Filippino, passing through Spoleto, caused a tomb of marble to be erected for him at the commission of Lorenzo, beneath the organ and over the sacristy, on which he spent one hundred ducats of gold; (..) and Lorenzo also caused Messer Angelo Poliziano to write the epitaph which is carved on the said tomb in antique lettering.
Giorgio Vasari - Lives of the most eminent painters, sculptors & architects - transl. by Gaston Du C. De Vere
A passage of the inscription (Ipsa meis stupuit Natura expressa figuris) says that Nature was surprised by Lippi's painting skills; it might have influenced Cardinal Bembo's epitaph for Raphael in the Pantheon.
We know very little about Giovanni Francesco Orsini, except that he was the young son of Nicolò Orsini (1442-1510), a condottiere who fought for the Republic of Venice together with Bartolomeo di Alviano, his cousin. In the XVIth century two Orsini were Bishops of Spoleto and the Orsini had a family chapel in the Cathedral. 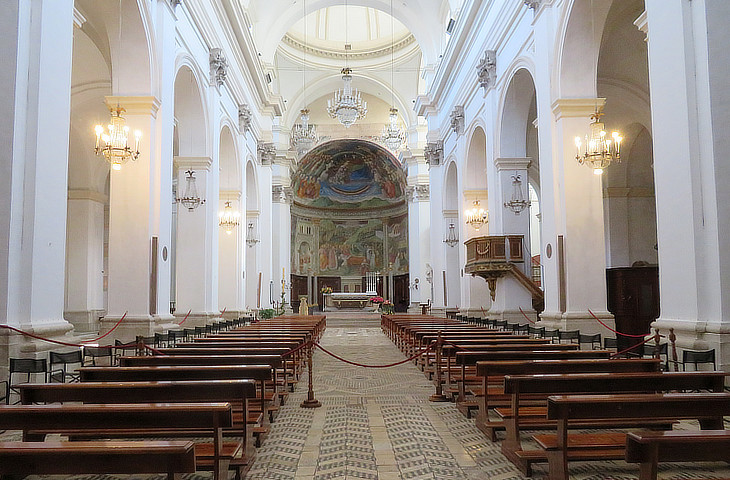 In 1638-1644 Cardinal Francesco Barberini, nephew of Pope Urban VIII, promoted the redesign of the interior which was also meant to overcome some worries about its medieval structures. In 1785, after some earthquakes had damaged the building, the interior was modified again by Giuseppe Valadier, a Roman architect who is best known for having redesigned Piazza del Popolo in Rome, so that today it has a classicizing rather than baroque aspect. 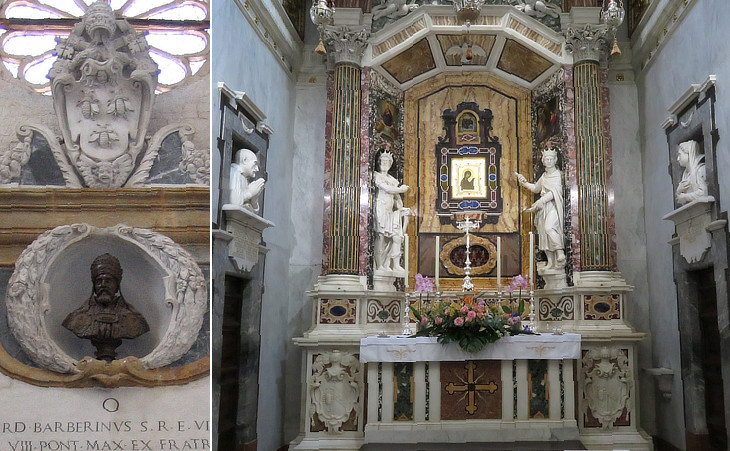 Pope Urban VIII had been Bishop of Spoleto in 1608-1617 and the inscription celebrating the end of the works says that he had thought of renovating the Cathedral at the time. The bust (now replaced by a copy) is a work by Gian Lorenzo Bernini who was higly esteemed by the Pope (see other busts and a large statue of the Pope by Bernini).
The chapel was built at the initiative of Andrea Mauri at the side of the apse in 1626. Its architect was Giovanni Battista Mola and the chapel reflects the prevailing art trends of Rome at the time, e.g. the use of coloured marbles (see Cappella Paolina in Rome) and the busts of the donor and his wife in the act of praying (see a page on this topic). 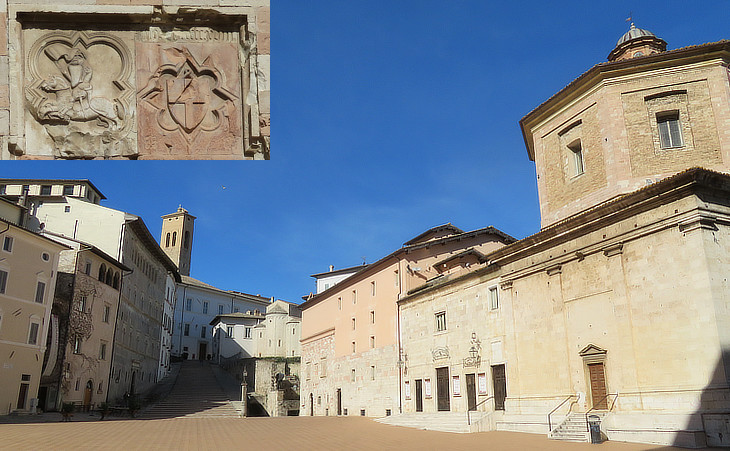 Via dell'Arringo (at its end the tower of the Town Hall and the apse of S. Eufemia inside Palazzo Arcivescovile); (inset) relief at Palazzo della Signoria showing a knight, the symbol of the town, also in the image used as background for this page

The two pulpits of the portico did not serve only a religious purpose, because they were used also during the public assemblies which were held in the square in front of the cathedral: for this reason the sloping street leading to it is called Via dell'Arringo (harangue).

Via dell'Arringo has two interesting Renaissance monuments: both S. Maria della Manna d'Oro and Palazzo Arroni were built in the XVIth century; according to tradition the graffiti of Palazzo Arroni were painted by Giulio Romano (1499-1546), a pupil of Raphael. The church, now deconsecrated, was erected to thank the Virgin Mary for her protection when the Imperial troops spared Spoleto after having sacked Rome in 1527.

Other pages on Spoleto:
Roman Spoleto - page one
Roman Theatre and Archaeological Museum
Medieval Spoleto
Churches outside the walls
Renaissance and Baroque Spoleto
or visit Rocca di Spoleto or move to Tempio del Clitunno and Trevi.