You may wish to see page one on Roman Spoleto first. 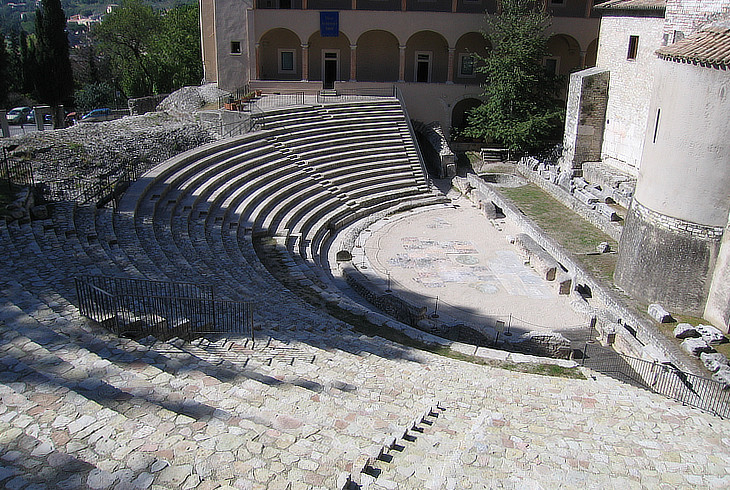 The Roman theatre of Spoleto is situated on the southern side of the hill near Arco di Monterone. It is dated early Ist century AD. Its facilities were repaired by the Roman themselves most likely in the IInd century AD. In the XIVth century, S. Agata, a Benedictine nunnery, was built above the remains of the theatre; the apse of its church stood above the scenae frons, the high wall behind the stage which the Romans decorated with columns and statues (see that at Orange). In the second half of the XVIIth century, the Ancaiani made use of the Roman stones of part of the seating section for the decoration of their palace. Ludovico Ancaiani, Bishop of Spoleto in 1739-1743, agreed to the use of Roman columns of Tempio del Clitunno for the decoration of new churches in Spoleto. He regarded them as "old stones" not deserving conservation. 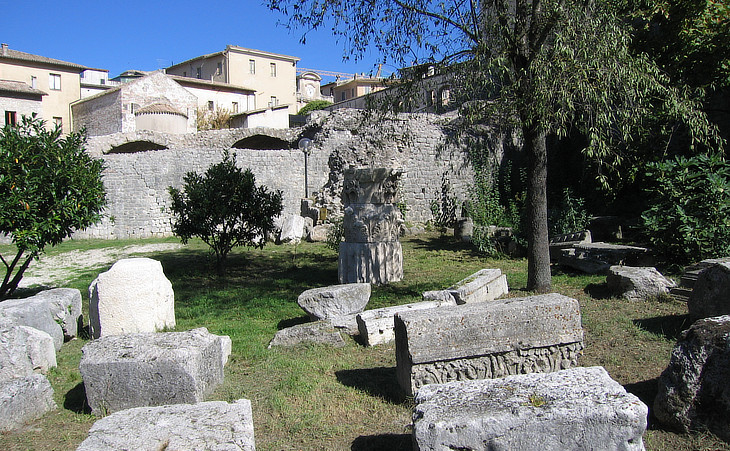 In 1870 the nunnery was turned into a prison and only in 1954 proper excavations and the dismantlement of the additional structures could begin. Part of the seating section is modern or reinforced by concrete, so that the theatre can be used as a venue for ballet performances at the Spoleto Music Festival which was founded in 1958 by Giancarlo Menotti. A section of the nunnery outside the area of the theatre houses the National Archaeological Museum of Spoleto. 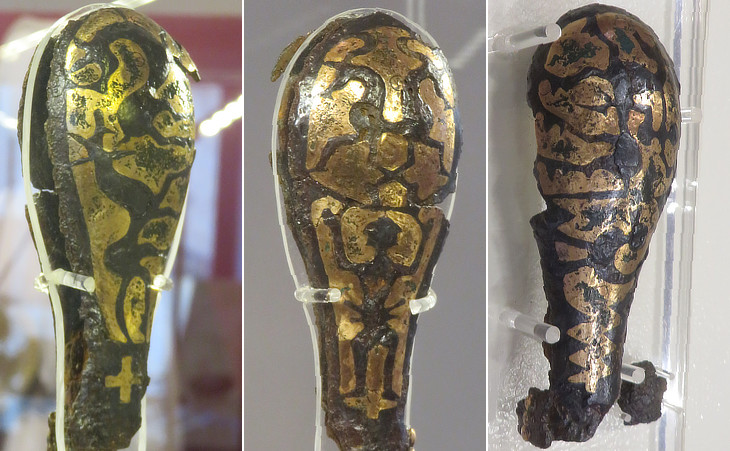 Archaeological Museum: metal ornaments of sceptres from a VIIth century BC necropolis outside Spoleto which was excavated in 2008

damascene is the English term for the process of decorating steel with gold or silver beaten into undercut grooves, which was typically used for swords at Damascus. The technique however was already known in antiquity and the Romans called it ad gemina metalla (with twin metals). The extraordinary decoration of some funerary sceptres testify to the advanced level of civilization reached by the early inhabitants of Umbria. The metals which were used for the sceptres are bronze and iron and their contrasting colours depict human and animal shapes. 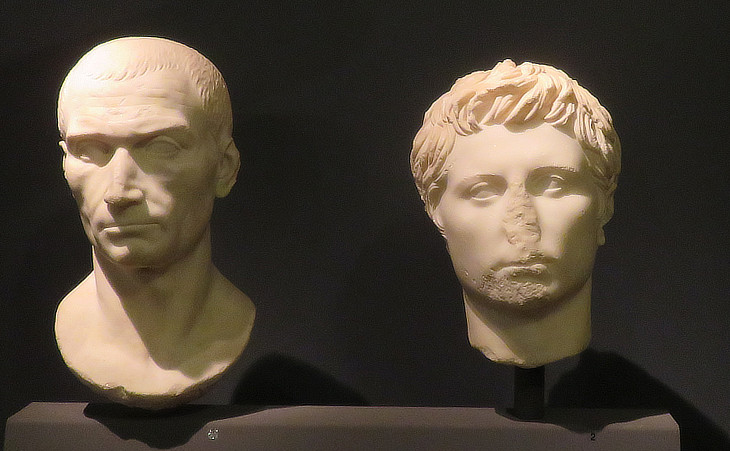 Archaeological Museum: busts from the theatre: (left) a local magistrate, perhaps Calvinius Sabinus the founder of the theatre and a friend of Julius Caesar; (right) portrait of Emperor Augustus

Excavations at Roman theatres have usually yielded a great number of findings (e.g. at Perge in Turkey) and this occurred at Spoleto too. Emperor Augustus inaugurated the practice of sending busts and statues of him to the provincial towns to be placed in public buildings or in new temples dedicated to him and Rome, e.g. at Ankara. His most common iconography is that fixed by the statues found at Prima Porta and on the Esquiline Hill. The bust of Spoleto portrays a more idealized and younger man, similar to a bust at Toulouse. 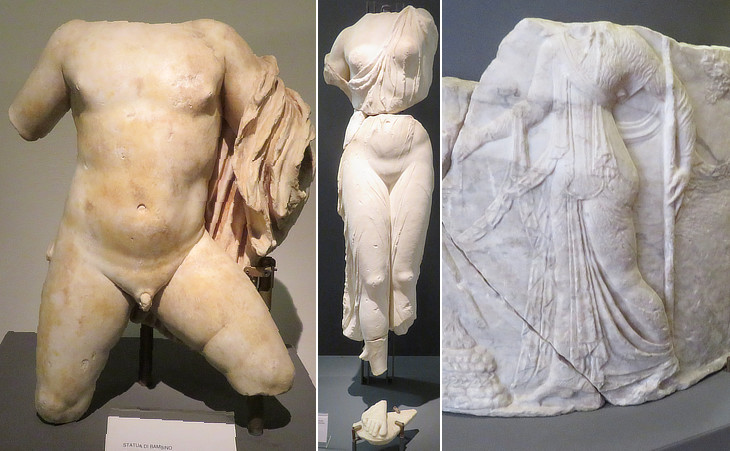 The IInd century AD was a period of great prosperity in the Roman Empire and the emperors promoted the enlargement and embellishment of public buildings. Dionysus/Bacchus (the god of theatre) and his followers were often chosen as subjects for the decoration of theatres; at Aspendos a relief portraying Dionysus was placed in the central niche of the scenae frons; Silenus, the god's drunken companion was portrayed in statues of the theatre of Athens; satyrs and maenads were depicted in many fine reliefs, e.g. in those of the theatre of Italica. 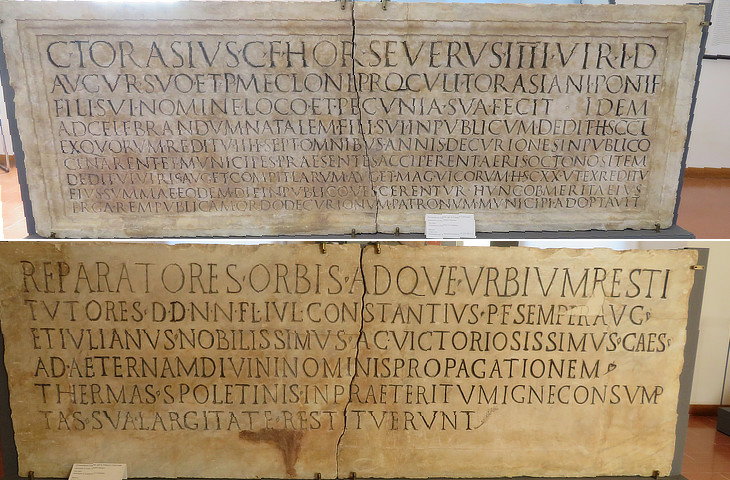 Archaeological Museum: (above) IInd century AD inscription celebrating Caius Torasius Severus, a local magistrate (quattuorviro) and benefactor who built baths, scanty evidence of which was discovered during the construction of S. Filippo Neri; (below) inscription on the other side of same stone celebrating Constantius II (Augustus) and Julian (Caesar) for having restored them after a fire

The first inscription records that Gaius Torasius Severus, son of Gaius, of the Horatia tribe, quattuorvir with judicial power, augur, in his own name and in that of his son Publius Meclonius Proculus Torasianus, the pontiff, erected something (the baths) at his own expense. He also gave 250,000 sesterces to the city and 120,000 sesterces to the Seviri Augustalis, the Compitales Lares Augustorum and the Magistri Vicorum, sums that were to be invested in order to finance a public banquet on his son's birthday. Because of his merits, the city council adopted Gaius Torasius Severus as the city's patron. The detail on the financial aspect of Torasius' munificence calls to mind that of Rerum Gestarum Divi Augusti, the spiritual testament of Emperor Augustus. The inscription is very finely carved with much attention being paid to its shape, composition, and symmetry (see a page on Roman inscriptions).
(In 355) Constantius decided to admit Julian to a share in the imperial power. So when he had been summoned and had arrived, on an appointed day all his fellow-soldiers there present were called together, and a platform was erected on a lofty scaffolding, surrounded by the eagles and the standards. On this Augustus stood, and holding Julian by the right hand, in a quiet tone delivered the following address: "(..) This Julian, my cousin as you know, rightly honoured for the modesty through which he is as dear to us as through ties of blood, a young man of ability which is already conspicuous, I desire to admit to the rank of Caesar, and that this project, if it seems advantageous, may be confirmed also by your assent."
Ammianus Marcellinus - Roman History - Book XV - Loeb Edition
The second inscription is interesting because it shows the decline of the Roman Empire both in the text (Constantius II and Julian are "repairers of the World" and "restorers of the City of Rome") and in the lettering of the inscription. 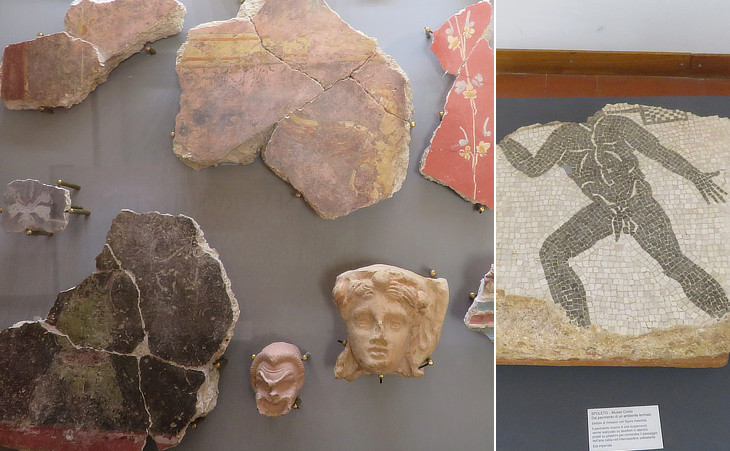 Archaeological Museum (IInd century AD): (left) fragments from frescoes and reliefs which were found during excavations in town in 2004; (right) fragment of a floor mosaic of a bath establishment

The upper part of the modern town is built above the Roman one, so all excavations which are made for a new building or to strengthen the foundations of a medieval one need to be inspected by archaeologists to ensure that interesting evidence of the past is not destroyed. Due to its position along Via Flaminia and to the fertility of its countryside Roman Spoleto was a rich town. Many wealthy Romans had villas in its environs, namely along the River Clitunno, as reported by Pliny the Younger: Along the banks are a number of villas, to which the beauty of the stream has given birth. (Letters - Book VIII to Romanus). 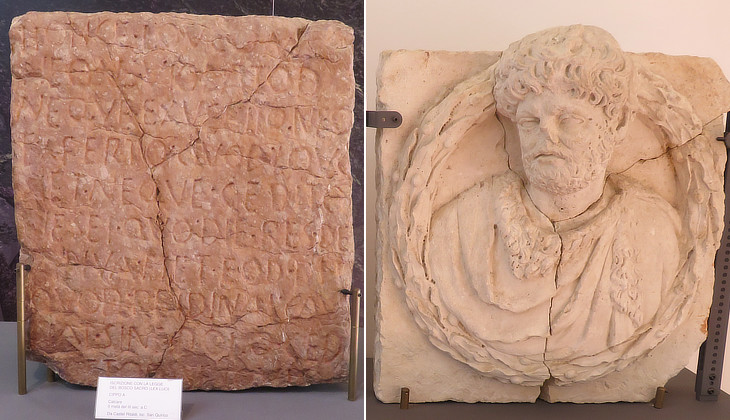 The trees formed the first temples of the gods, and even at the present day, the country people, preserving in all their simplicity their ancient rites, consecrate the finest among their trees to some divinity; indeed, we feel ourselves inspired to adoration, not less by the sacred groves and their very stillness, than by the statues of the gods, resplendent as they are with gold and ivory.
Pliny the Elder - Historia naturalis - Book XII - translation by John Bostock and H.T. Riley
The citizens of Roman Spoleto cared about the woods of Monteluco, the hill which stands opposite the town. The inscription says: This sacred forest let nobody profane or carry away on carts or by hand that which belongs to the forest or cut wood, except on the day of the annual sacrifice. On that day, thanks to the sacrifice, it will be allowed to cut without fraud.
Imago clipeata the image of the dead on a round shield was frequently placed at the centre of a sarcophagus (see an example in a page on Roman funerary rites). 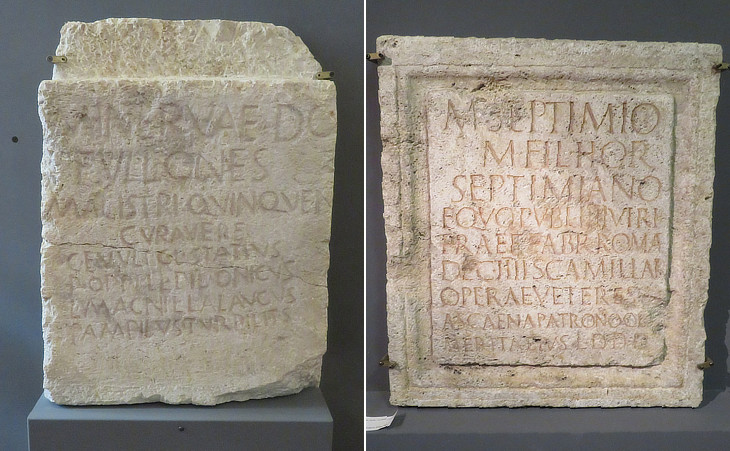 The very large amount of Roman epigraphical material provides information about many different aspects of life. Some inscriptions shed light also on the social and economic realities of the past. Guilds played a major role in the organization of economic activities in ancient Rome. All those who earned their living from their work (manual, entrepreneurial or professional) had to join a recognized guild. Guilds of fullones are recorded in several inscriptions throughout the Empire (see the statue they erected at Pompeii to Eumachia, a local priestess). Much less common is the activity of the scamillarii or scabillarii, dancers/players who were named after a pair of hinged wooden plates attached to their sandals, which they used to beat time (rather than castanets as shown in a fresco at Pompeii).

Museo del Ducato di Spoleto (in the fortress): IVth century Christian sarcophagus depicting the dead, two Good Shepherds and a decoration based on the curved shape of strigilis, a tool used by the ancient Romans to take away sweat or oil after exercise or massage

Some exhibits of the late Roman antiquity have been moved to a newly inaugurated museum covering the period (569-1198) during which Spoleto was the capital of a large duchy established by the Longobards.

The image in the background of this page shows a Roman altar at the Archaeological Museum.

Other pages on Spoleto:
Roman Spoleto - page one
Medieval Spoleto
Churches without the Walls
The Cathedral
Renaissance and Baroque Spoleto
or visit Rocca di Spoleto or move to Tempio del Clitunno and Trevi.