Orte is a small town known by almost all Italians, although very few of them have ever been there. This is because in the XIXth century the name of the town was given to the junction between the railway line linking Rome with Florence and that linking Rome with Ancona and Perugia (via Spoleto and Assisi). Almost all trains stopped at this junction and travellers thought that the few buildings outside the station constituted the town of Orte. A popular joke on a motto by Giuseppe Garibaldi O Roma o morte! (either Rome or death!) added to the celebrity of the town: the motto was turned into O Roma o Orte! (either Rome or Orte!). 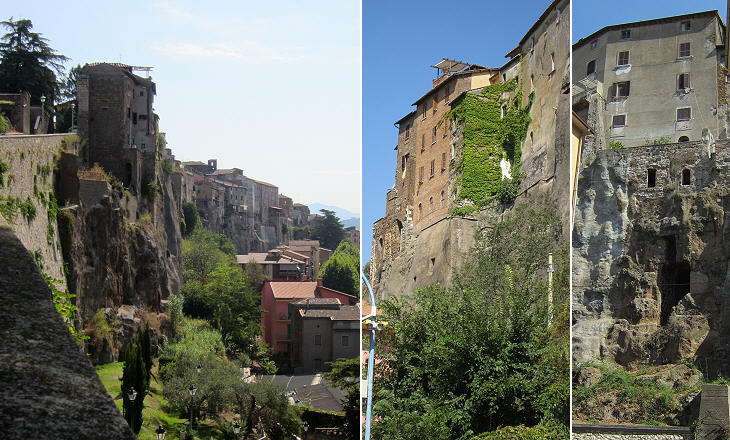 Orte is located a few miles from the railway junction on an isolated rock overlooking the Tiber, before it is joined by the Nera River which significantly increases its flow. The cliffs which surround the town on almost all sides made it easily defensible without the construction of long walls. (left) View northwards showing the ruins of a bridge; (righ) view westwards across the deep ravine which separates Orte from the volcanic plateau where all the other towns of this section are situated; the image shows SS. Trinità, a small church cut into the rock

Via Flaminia was the main road which linked Rome to Umbria and the northern Adriatic Sea. It entered the valley of the Nera River south of Orte and it crossed that river at Narni on an imposing bridge built by Emperor Augustus.
Via Amerina was a minor road which followed the valley of the Tiber and reached Ameria (today's Amelia in Umbria). The Romans built a bridge on the Tiber immediately north of Orte which was known as Ponte di Augusto, although it was built at an earlier time. The bridge became the emblem of Orte and it can be seen in the image used as background for this page.
The Roman bridge (or its medieval reconstruction according to some sources) collapsed in the early XVIth century and it was never rebuilt because towards the end of that century Pope Sixtus V built Ponte Felice, a new bridge near Civita Castellana, ten miles south of Orte. 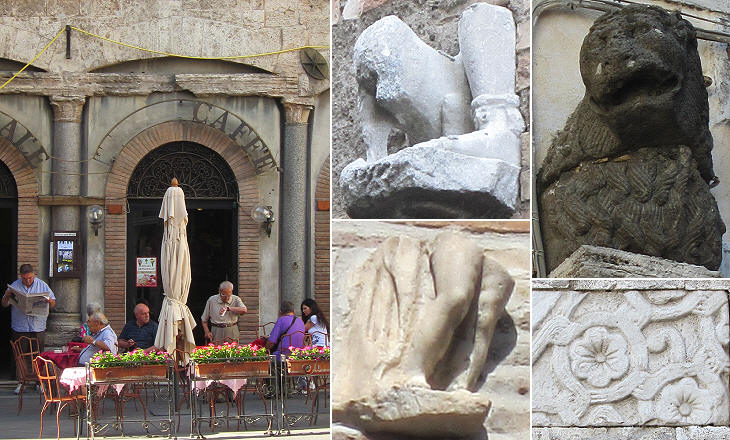 The history of Orte starts with the Etruscans and its importance grew during the Roman rule when it was crossed by Via Amerina. However the town retains only a few columns and some reliefs on the walls of its houses from that period . A relief showing the foot of a hunter next to a dog is called Piè di Marmo and it gives the name to a street, similar to what happened in Rome for a a gigantic foot of Isis. 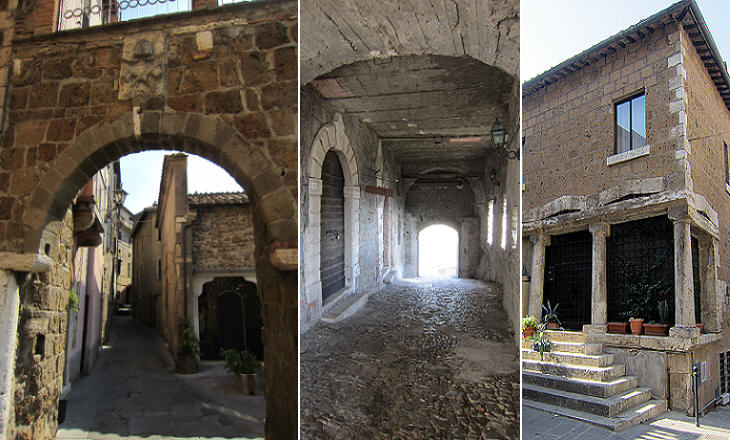 Similar to Sutri, Orte was donated by the Longobard kings to the popes in the VIIIth century. At that time Rome was ruled by a Byzantine governor who reported to the Exarch of Ravenna, a sort of proconsul, who in theory had jurisdiction over the whole of Italy. Because the Longobards controlled Via Flaminia, Orte and Via Amerina acquired great importance because they allowed direct communication between Rome and Ravenna, the so called "Byzantine corridor".
Eventually the bridge of Orte became the only stone bridge across the Tiber north of Rome and this helped the economy of the medieval town. Most of the medieval churches of Orte, including the cathedral, were redesigned in the XVIIIth and XIXth centuries. At S. Silvestro the additions/modifications were removed as much as possible to bring the church back to its original shape which included a (lost) small porch. According to an inscription S. Silvestro was built in 1141 and in addition to being a church it was the site where duties were collected. 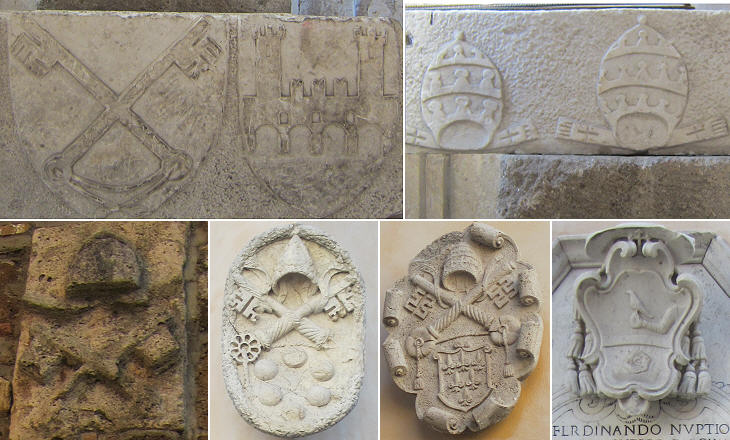 Similar to many other towns of the region, medieval Orte acquired a degree of self-government which came to an end when the popes returned from Avignon. Cardinal Gil de Albornoz built a fortress at the northern entrance to the town for the papal governor and his garrison. In 1417 Pope Martin V assigned Orte to his nephew Antonio Colonna who treated the inhabitants without respect for their rights. After the pope's death in 1431 a revolt forced Antonio Colonna to flee and the fortress was razed to the ground and never rebuilt.
Apart from this episode Orte was peacefully ruled by papal envoys. 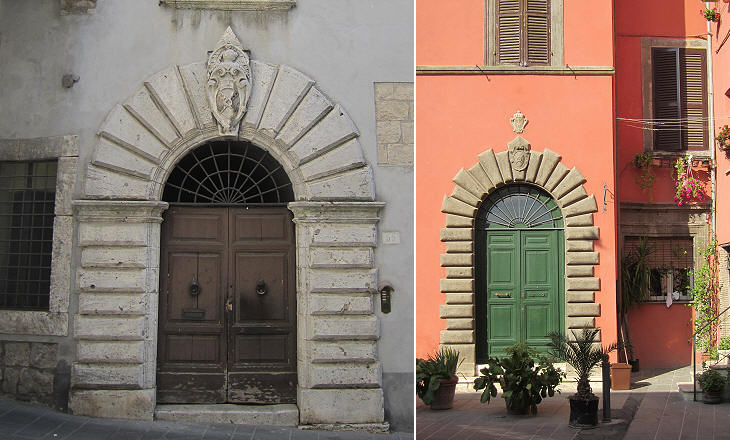 Five Renaissance palaces of Orte show the same coat of arms. It belongs to the Alberti, a Florentine family of wool merchants: in the XIVth century they opened a branch of their business at Orte and in the XVIth century they built five palaces, all showing a simple and neat design, typical of Florentine architecture. (left) Arches of the aqueduct; (right) underground fountain in the main square of Orte

In 1685 an aqueduct was built to carry water to Orte. Because of the height of the rock platform upon which the town is situated the conduit reached the main square several feet below street level so that the public fountain had to be built underground. After the collapse of the bridge on the Tiber and the construction of Ponte Felice, Orte lost most of its importance and it slid into obscurity until the railway revived it in the XIXth century. When Ferdinando Nuzzo (or Nuzzi), a native of Orte, was created cardinal in 1715 by Pope Clement XI, the town experienced a short period during which some embellishments were made. The cardinal's funerary monument was most likely commissioned to an important Roman sculptor. You may wish to see other monuments where the dead is portrayed in the act of praying. 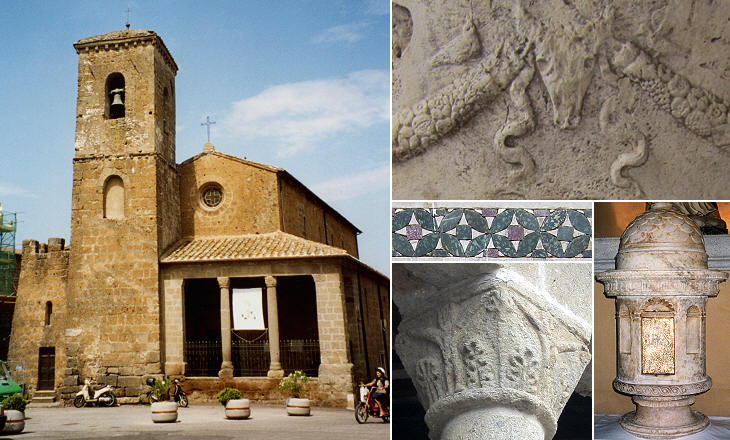 Vasanello is a small town, five miles south of Orte, on the ancient Via Amerina. Its name derives from workshops making vases. S. Maria Assunta was built upon a Roman temple in the XIth century. Its bell tower was part of the walls which protected the small settlement which did not have natural defences. The church retains some interesting memories of its past. In the XIIIth century the inhabitants of Vasanello built a very high Romanesque bell tower by using the white stones of Via Amerina. According to tradition it was built above an ancient Etruscan mausoleum. A Roman funerary relief was walled on the bell tower, similar to what was done at nearby Bomarzo.
The church is older than its bell tower and in the interior it retains a 1038 inscription where Vasanello is mentioned for the first time. 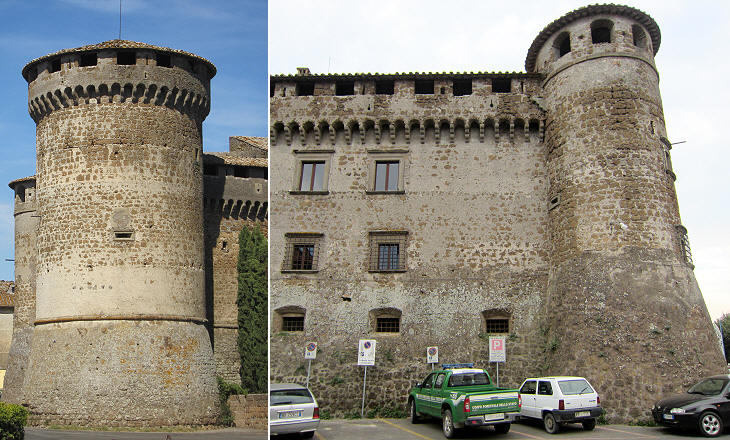 In 1489 Orsino Orsini, Duke of Vasanello (or Bassanello as it was called at the time) married Giulia Farnese, a beautiful young woman who shortly after her marriage (or perhaps even before) became the mistress of Cardinal Rodrigo Borgia (from 1492 Pope Alexander VI). Giulia Farnese ensured her husband had some compensation for his silent tolerance of her affaire and she favoured the ecclesiastical career of her brother Alessandro, the future Pope Paul III. She lost her husband in 1500 and her lover in 1503. At that point she thought it wise to establish good relations with the new pope (Pope Julius II Della Rovere) and in 1505 she arranged the marriage of Laura, her only daughter, to Nicolò Della Rovere, nephew of the pope, who became the new duke of Vasanello. (left) Gate of the castle with the coat of arms of the Della Rovere; (right) detail of a fresco in Cappella di S. Lanno

Eventually the fiefdom of Vasanello was acquired by the Colonna di Palestrina and after them by the Barberini and by the Sciarra Colonna. After the financial default of Prince Maffeo Sciarra Colonna the castle of Vasanello ended up in the hands of a bank. In 1907 it was bought by Mons. Luigi Misciattelli, a very rich prelate, whose family still owns it.
Saint Lanno (or Lando) is the patron saint of Vasanello. According to tradition he was a German soldier serving Co-emperor Maximian. In 294 he became a Christian and eventually he was put to death at Vasanello. A fresco in a small chapel portrays him as a Renaissance knight.