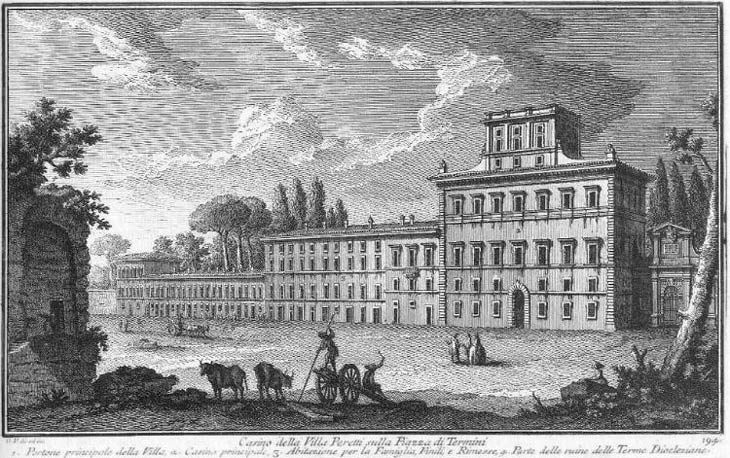 In 1595-1597 Pope Sixtus V built Acqua Felice, an aqueduct which carried water from the Alban hills to the northern part of Rome and to the large estate (Villa Peretti or Montalto) he had bought when he was a cardinal. The plate shows the entrance to Villa Peretti near Piazza di Termini. The villa is also partially shown in plate 127. In 1696 it was sold to Cardinal Giovanni Francesco Negroni and it became known as Villa Negroni.
The view is taken from the green dot in the small 1748 map here below. In the description below the plate Vasi made reference to: 1) Main entrance; 2) Main Casino; 3) Buildings for the servants, hay-lofts and coach-houses (aka Case di Farfa); 4) Ruins of Terme di Diocleziano. The small map shows also 5) Aggere Serviano; 6) approximate location of Stazione Termini.

In 1860 Pope Pius IX decided to build Rome's Central Railway Station in the gardens of Villa Peretti. After the annexation of Rome to the Kingdom of Italy in 1870 the new government decided to make Stazione (di) Termini (*) a key element in the design of a "modern" capital and in 1888 the casino of Villa Peretti and the long sequence of low buildings on its northern side were pulled down to make room for a large square.
(*) Thus Stazione Termini does not mean "Terminal Station" as many believe, but rather "Station near Terme (di Diocleziano)". 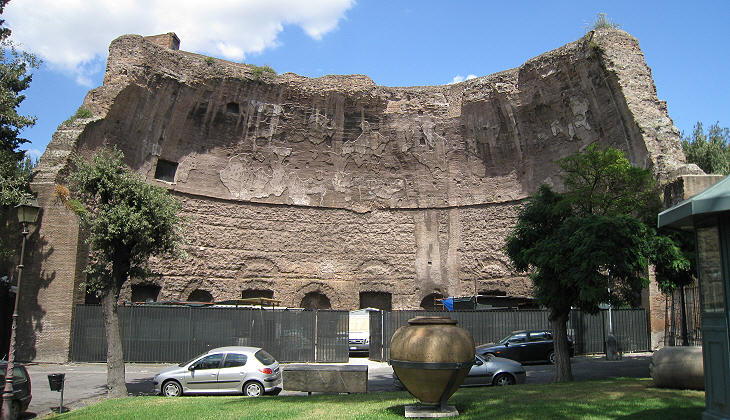 The plate shows a niche of the baths named after Emperor Diocletian; they are covered in an extensive way inanother page. 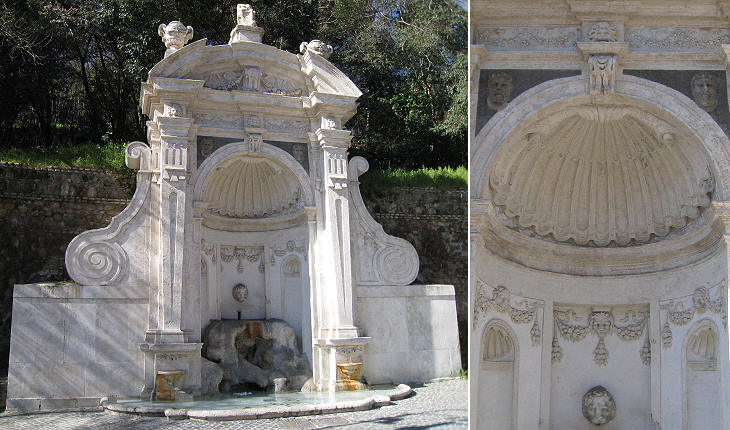 Fontana del Prigione by Domenico Fontana, a fountain from Villa Peretti which in 1938 was relocated near S. Pietro in Montorio. It is decorated with the lion and the pears of Pope Sixtus V

Mont Alto's villa is entered by a stately gate of stone built on the Viminalis, and is no other than a spacious park full of fountains, especially that which salutes us at the front; stews for fish; the cypress walks are so beset with statues, inscriptions, relievos, and other ancient marbles, that nothing can be more stately and solemn. The citron trees are uncommonly large.
John Evelyn's Diary and Correspondence
In 1784 Villa Peretti was acquired by Giuseppe Staderini, a merchant, who in the following years sold most of its works of art. 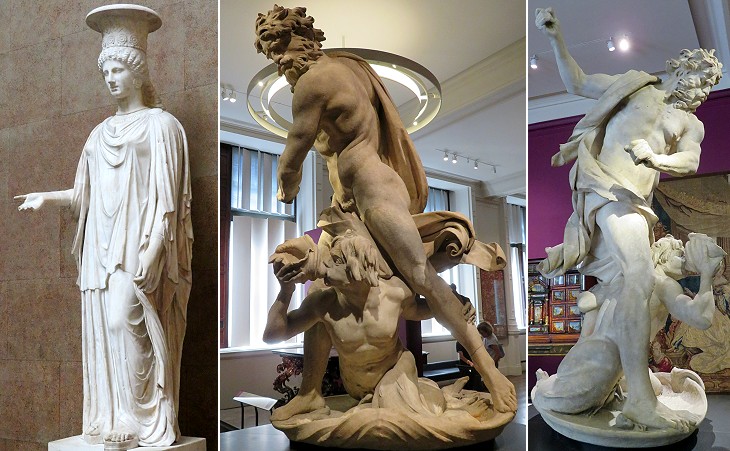 Statues from the Villa in London: (left) British Museum: a caryatid which originally stood near Bagni di Erode Attico along Via Appia; (right) Victoria and Albert Museum: Neptune and Triton by Gian Lorenzo Bernini

January the 20th 1659. We went into A Pallace that was formerly belonging to Cardinal Montalto of the Family of Xistus Quintus. (..) Wee then passed to the fish pond where is a Neptune standing in his shell upon a Titan, and his Trident in his hand, made out of one Marble stone by the famous Barnino, who is now Alive in Rome, and who for his Rare and incomparable Art in graving was made a Knight by the Pope. On each side of this Statue are two heads which out of their garlands spout forth water in very pleasing figures. Here are likewise many devices to wash men onawares, and conveyance of water to water the plants, so that in this large Paradise, of two miles about, is a perpetual spring.
Francis Mortoft's Journal of his travels in France and Italy

Musei Vaticani: sarcophagus from Villa Peretti which was bought by Pope Pius VI 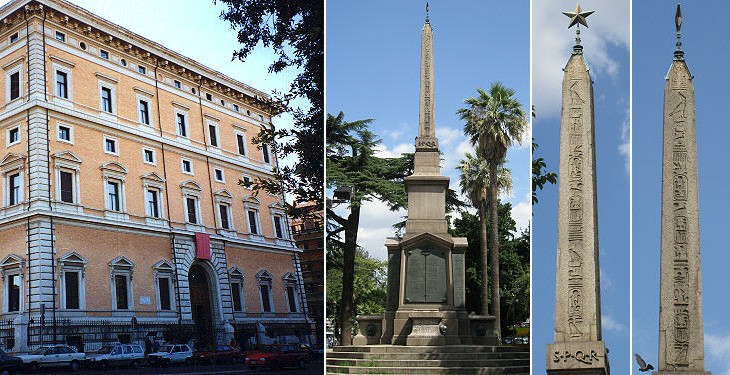 The property was eventually bought in 1789 by the Massimo who regarded it as an enlargement of their villa near S. Giovanni in Laterano. In 1843 it was described as an extensive farm, rather than an urban villa by Rev. Jeremiah Donovan. In 1883-1886 the Massimo built a large palace near the site of the old casino (not to be confused with Palazzo Massimo alle Colonne or Palazzo Massimo di Rignano); it now houses a section of Museo Nazionale Romano.
In 1883 an obelisk was found near S. Ignazio; it was originally erected in Heliopolis by Pharaoh Rameses II. In 1887 it was placed in front of Stazione Termini, but in 1924 it was relocated to the gardens opposite Palazzo Massimo (see a page on all the obelisks of Rome). It is known as Obelisco di Dogali because it embellishes a small monument to 500 Italian soldiers who fell in January 1887 at Dogali, in today's Eritrea; this explains why the large square on the site of the old buildings is called Piazza dei Cinquecento (500). 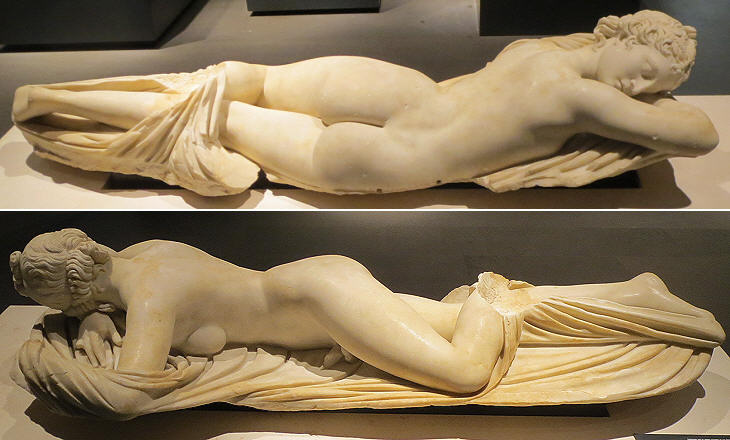 Museo Nazionale Romano at Palazzo Massimo alle Terme: Sleeping Hermaphroditus, an ancient statue found in the late XIXth century in the proximity of the building: you may wish to see similar statues at the Louvre Museum (restored by Gian Lorenzo Bernini), at the Uffizi Gallery and at Galleria di Villa Borghese

Rome does not have a "main" archaeological museum. Ancient works of art are housed in museums belonging to the Holy See (mainly exhibits which were found before 1870), to the Italian State (mainly exhibits after 1870) and to the City of Rome. It is really hard to rank them. 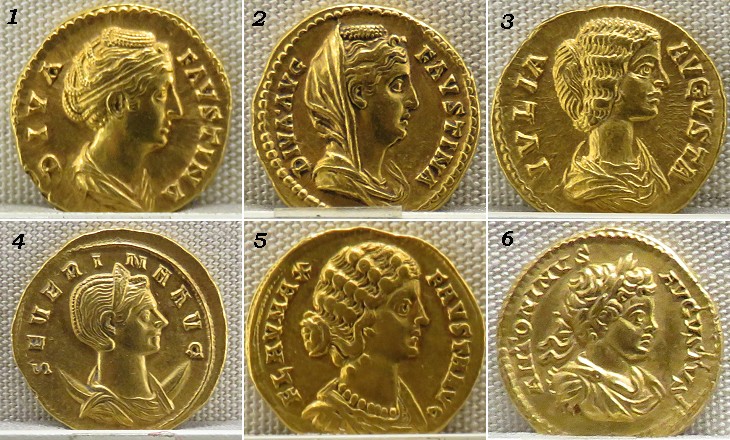 Some exhibits of Palazzo Massimo are shown in pages dealing with the location where they were found, e.g. Discobolus Lancellotti the Girl of Anzio and two bronze statues found near S. Silvestro al Quirinale. A visit to the Museum cannot miss a very large collection of coins which show the excellency of Roman mints. In 1938 work started to replace the XIXth century railway station with a larger one; because of WWII the construction of the new facility was interrupted. It was completed in 1950 with a new entrance hall, which is labelled as il dinosauro because of the shape of its concrete roof (which you can also see in the image used as background for this page). You may wish to see a page on EUR, a modern development of Rome and another one on some very recent buildings. 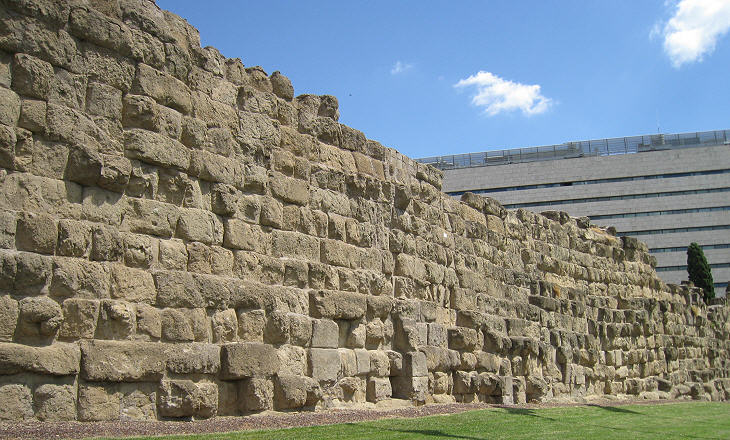 The enlargement of Stazione Termini led to levelling the ground where the new facility was to be built; a long mound stood to the left of the planned building. The mound was known as Monte della Giustizia because of a statue of Rome at its top, which was thought to represent Justice; the statue was placed at the end of a long alley which is visible in the small 1748 map (it is now inside Castello Massimo at Arsoli).
To the great dismay of railway technicians, who had to rework their projects, the mound revealed an unexpected content: a long section of the so-called Servian Wall, which according to tradition was built by King Servius Tullius. Today archaeologists say it was built after the Gauls sacked Rome in 387 BC.
This section of the wall shows a construction technique which is based on the alternate positioning of stones having a parallelepiped shape along their long or short sides. A ditch increased the effectiveness of the fortification; the Romans called agger a wall or an artificial mound which was protected by a ditch. Another section of the Servian Wall can be seen near S. Saba.