Orvieto - Medieval Monuments
(Detail of the Cathedral of Orvieto) 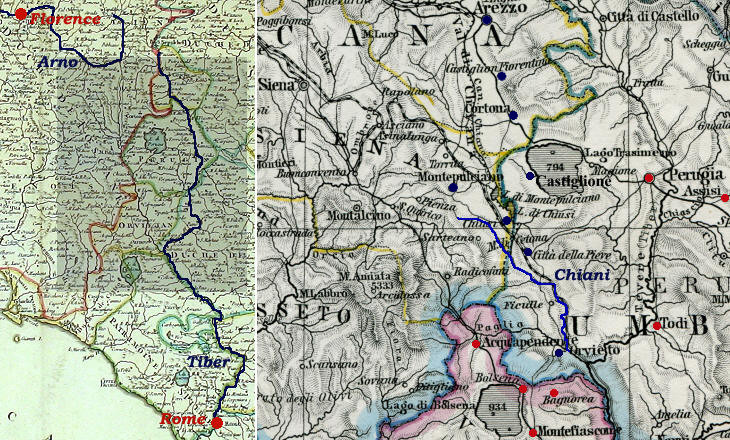 (left) XVIIIth century French map of the territories between Florence and Rome and the Arno and Tiber rivers, the darker area is shown in the next map; the brown line indicates the border between the Grand Duchy of Tuscany (left) and the Papal State (right); (right) 1864 map of Val di Chiana: blue dots: towns covered in this section; red dots: towns covered in other sections: Montefiascone, Bolsena, Acquapendente, Bagnoregio (Bagnorea), Todi, Perugia and Assisi

Val di Chiana, named after Chiani, a small stream which empties into the Tiber, is a valley between Tuscany and Umbria having a north-south direction. At the time of the ancient Romans Via Cassia, the road which linked Rome to Florence, crossed this valley. In the XIth century, during a conflict between Perugia and Orvieto, the inhabitants of the latter town built a dam on the Chiani which turned the valley into a marsh. The route of Via Cassia was modified and it ran across Acquapendente and Siena. The political division of the valley between the Papal State and the Grand Duchy of Tuscany added to the misery of this part of the country until the late XVIIIth century when the two governments reached an agreement which eventually led to reclaiming the valley. 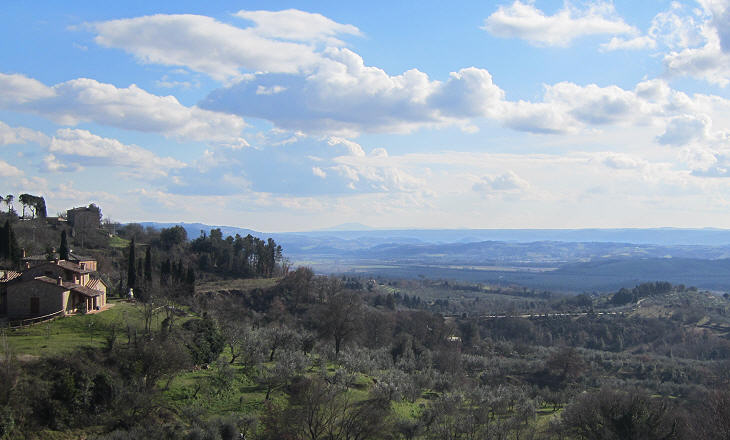 In 1875 the route of the Florence-Rome railway was significantly shortened by the opening of a new section across Val di Chiana. In 1877 Henry James complained about the change: The railway journey from Florence to Rome has been altered both for the better and for the worse; for the better in that it has been shortened by a couple of hours; for the worse as (..) the train deflects to the west and leaves the beautiful old cities of Perugia, Assisi, Terni, Narni, unvisited. (..) Now, however, for compensation, the express train to Rome stops at Orvieto.
In 1964 Autostrada del Sole, the main Italian highway, was completed by the opening of the section between Chiusi and Orvieto. 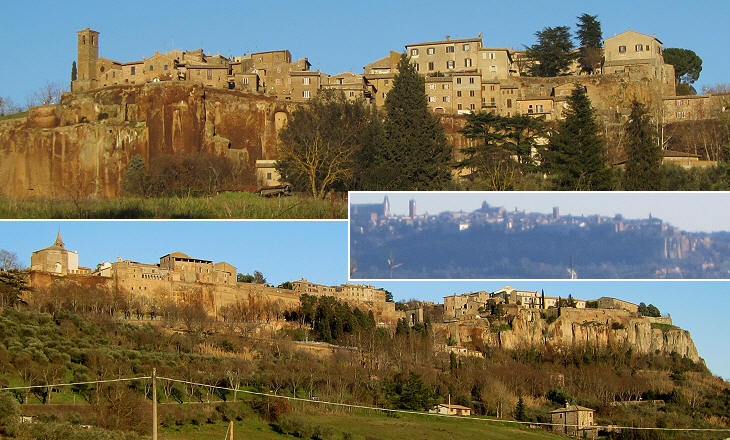 Orvieto is situated on an isolated rock at the north-eastern end of the volcanic plateau which characterizes northern Latium. The steep cliffs of the rock provided a natural defence which attracted the first settlers. The rock housed an Etruscan town which was conquered by the Romans in the IIIrd century BC. Instead of founding a colony, the Romans chose to relocate the inhabitants to Bolsena and the old town was abandoned. You may wish to see two beautiful Etruscan terracotta sarcophagi which were found in the Tuscan side of Val di Chiana. 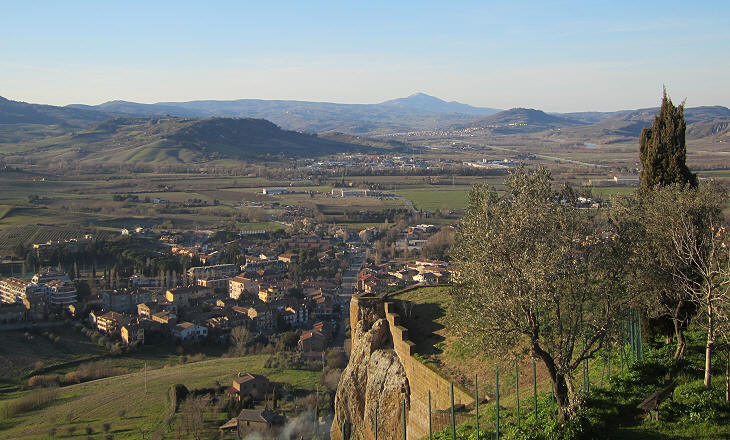 View from near S. Giovenale towards Mt. Amiata (5,333 ft) the highest mountain of southern Tuscany

The natural protection offered by the rock attracted new inhabitants from Bolsena in the Early Middle Ages. They occupied the south-western corner of the rock near the ancient access to the Etruscan town. The first bishop of Ourbibentos is recorded in 590 in a Byzantine chronicle. The Latin name of the town was Urbs Vetus (Old Town) from which Orvieto. 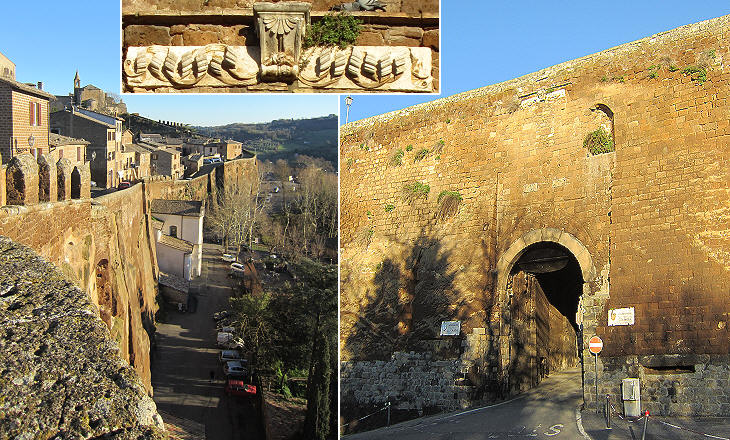 The Etruscans cut the cliff to provide their town with a proper access and this is still remembered by the name given to the street leading to the gate: Via della Cava, Street of the Quarry, because it was excavated into the rock. Porta Maggiore was the main access to the town until 1882. The niche above the gate housed a statue of Pope Boniface VIII who often resided at Orvieto. 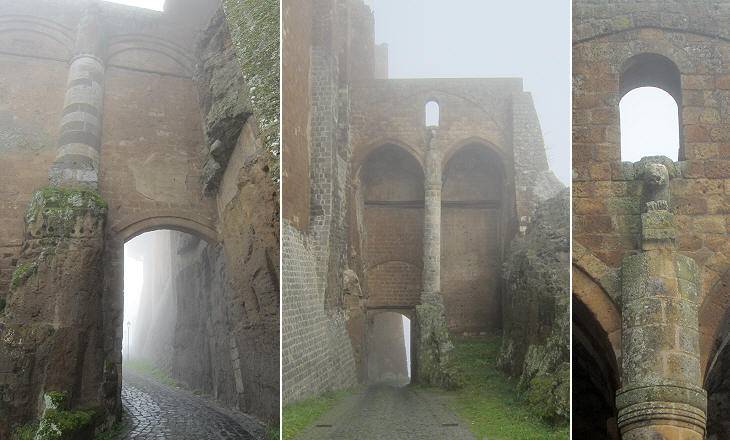 Porta Postierla on a foggy morning, not unusual in the inner valleys of the Italian peninsula as Charles Isidore Hemans, son of poet Felicia Dorothea Hemans, experienced "Early on an autumn morning I left Orvieto to travel by vettura southwards. The valley that surrounds the isolated height where the city stands was filled with dense mist, like a rolling sea of white waves; nothing of town, towers, or rocks was visible through that autumnal veil" (from A. J. C. Hare - Days near Rome - 1875): (left) external view; (centre) internal view; (right) detail showing the niche where a statue of Pope Boniface VIII stood

posterula is a Latin word meaning small, rear gate. The name may appear inappropriate for the XIIIth century tall gate built at the eastern end of the rock, but it refers to a small gate which stood there and was replaced by Porta Postierla. The XIIIth century marked the peak of the power of Orvieto which controlled a vast territory including a port (Orbetello, small Orvieto) on the Tyrrhenian Sea. The whole rock was fortified, although the town was limited to its western side. 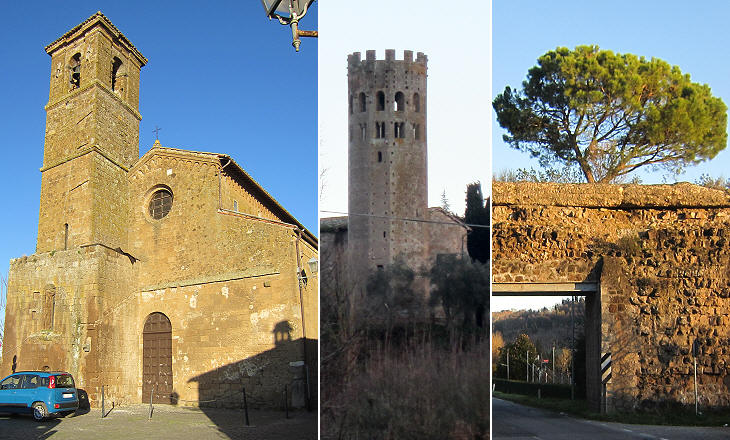 Because of its Cathedral, Orvieto is strictly associated with Italian Gothic architecture, but some of its early churches show other styles. S. Giovenale is a Romanesque church (XIth century) built in a commanding position. Its bell tower was most likely a watchtower from which the inhabitants could be forewarned of enemies approaching the town.
The bell tower of Abbazia dei SS. Severo e Martirio (south of the rock) has a Romanesque bell tower (XIIth century) typical of Lombardy (a similar tower can be seen in page three).
In the XIIIth century an aqueduct was built to provide Orvieto with water and chronicles indicate that the town had several fountains. The aqueduct however was built at too low a level (it did not rest on arches); the complex system which made the water rise to the level of the town wore out and in the XVIth century it was completely abandoned and the fountains were replaced by wells (e.g. Pozzo di S. Patrizio and others). 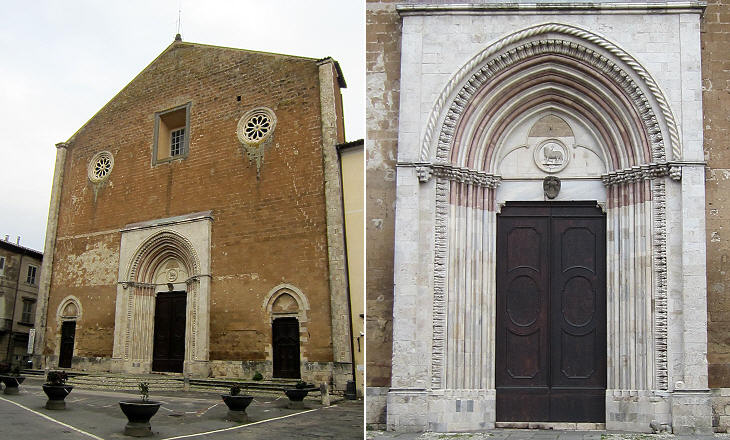 S. Francesco: (left) façade; (right) portal (the image used as background for this page shows a detail of the portal of S. Agostino, another large church of the same period)

S. Francesco was built in 1240-1266. Its size indicates the importance acquired by the order founded in 1209 by St. Francis of Assisi. The portal was decorated with a pink stone from Mt. Subasio, the mountain of Assisi, which characterizes many churches of that town.
In 1273 the solemn funerals of Henri of Almain were held in this church. The English knight was assassinated in Viterbo. The ceremony was attended by Pope Gregory X and by King Edward I of England and his wife Eleanor of Castile who were on their way home from the Holy Land. 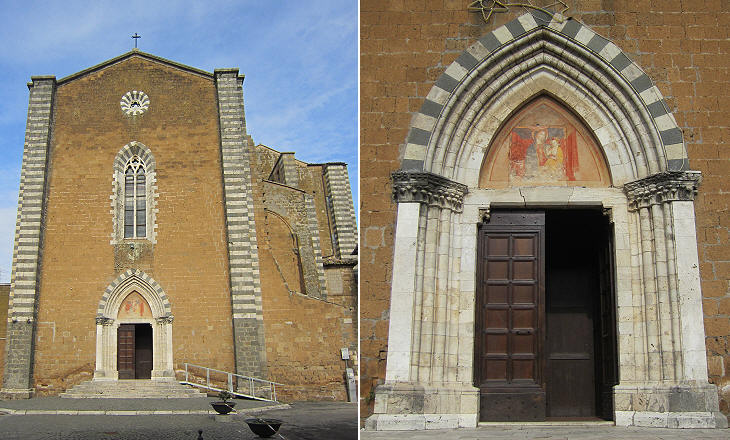 The Dominican Order was approved in 1216 and it soon became very popular. S. Domenico was built in 1260-1280. The pillars of the church were decorated with layers of white and black (volcanic) stone, a pattern which was followed a few years later for the construction of the Cathedral.
S. Domenico was a very large church, but in 1934 its naves were demolished to make room for modern buildings. The church had been modified in the XVIIIth century and in the 1930s its Baroque style was not much appreciated. The transept and the tribune were spared and a portal from another church was utilized as an entrance to the much reduced building. 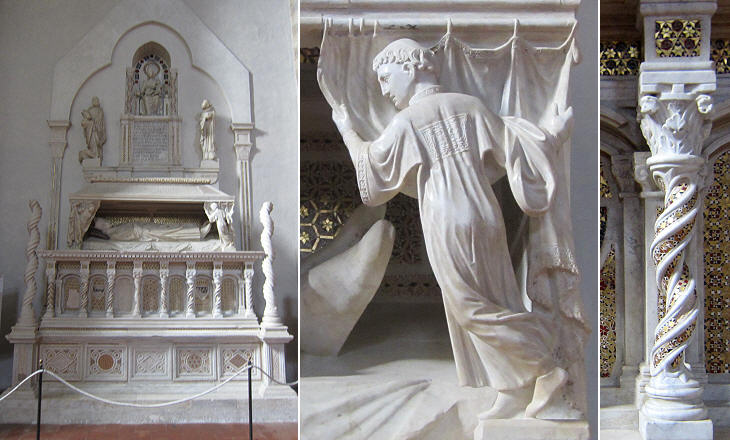 Guillaume de Braye was for twenty years (1262-1282) one of the most influential members of the Papal Court which often moved from Viterbo to Orvieto. His monument in S. Domenico shows the talent and skill of Arnolfo di Cambio, the leading architect and sculptor of his time. The monument was dismantled in 1680 and reconstructed, perhaps not accurately, in 1750 with the loss of the canopy. The two servants who close the curtains break the rigid pyramidal scheme of traditional gisants monuments. 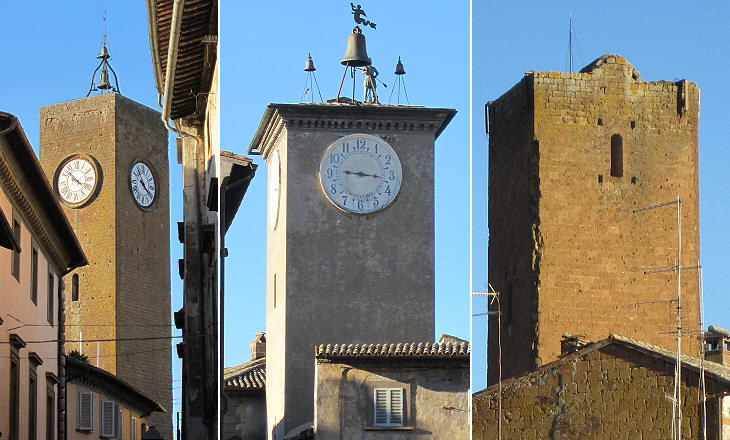 The political structure of a medieval Italian town-state such as Orvieto was very complex. The town had its own governing bodies, but it had to accept the ultimate sovereignty of the Pope or even of the German Emperor. Leading families competed for supremacy and opposite factions were often at war. This had an impact on the urban landscape of Orvieto as many families built towers to protect themselves. Some of these towers were eventually incorporated into public buildings and were utilized as supports for clocks and bronze figures striking the hours on a bell. 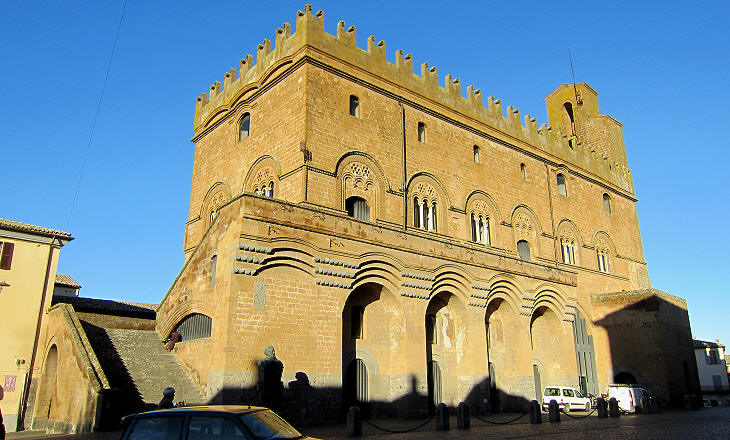 In the XIIIth century the power of the families of noble origin was challenged by Popolo Grasso (Fat People), an emerging class of merchants and representatives of the guilds. They advocated a greater role in the government of the town. The Capitano del Popolo was a magistrate elected by this class and in a way it resembled the plebeian tribunes of the ancient Roman Republic, such as the Gracchi brothers. This political structure required a building which could house assemblies of the representatives of Popolo Grasso. Palazzo del Popolo was built in 1281-1308 and its sheer size was meant to symbolize the importance of the institution. 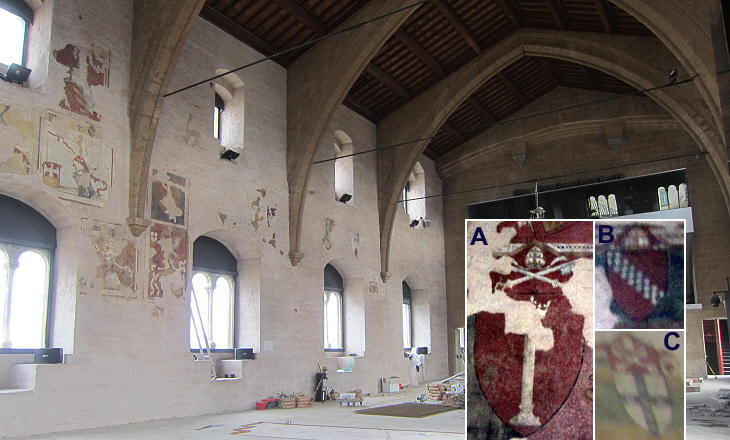 Sala dei Quattrocento, a great hall for the assemblies, could house four hundred delegates and today it is often used by political parties for their conferences. After the decline of the local independent government system, Palazzo del Popolo was utilized by delegates of the popes who painted the walls of Sala dei Quattrocento with their coats of arms and with those of the popes who appointed them. 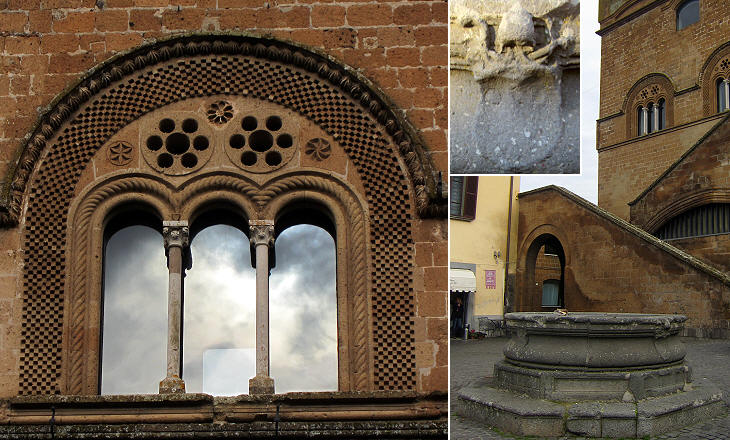 Palazzo del Popolo: (left) one of the windows; (right) nearby well with the coat of arms of Pope Clement VII (inset)