Renaissance and Baroque Spoleto
(relief of a tabernacle in S. Gregorio Maggiore)

You may wish to see pages on Roman and medieval Spoleto first. 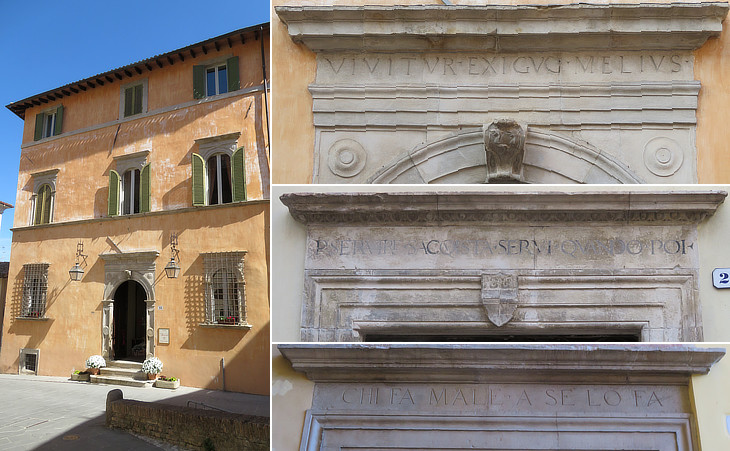 (left) Palazzo Dragoni; (right) inscriptions having a moral content on the lintels of Palazzo Dragoni (above - in Latin) and two other palaces (in Italian); translations: To live with little is better - Through serving one gains. Serve when thou canst - Who does evil things, does them to himself

The town of Spoleto is, in general, well-built, and though occasionally damaged by earthquakes, as we were informed by various inscriptions on the public buildings, yet it possesses many noble edifices, and beautiful palaces.
John Chetwood Eustace - Classical Tour of Italy in 1802 (publ. 1813)
The portal and windows of Palazzo Dragoni are typical of the early Renaissance and in Rome they can still be seen in Rione Ponte. Some of the maxims are quotations from ancient authors: that at Palazzo Dragoni was written by Claudian, an early Vth century Latin poet. 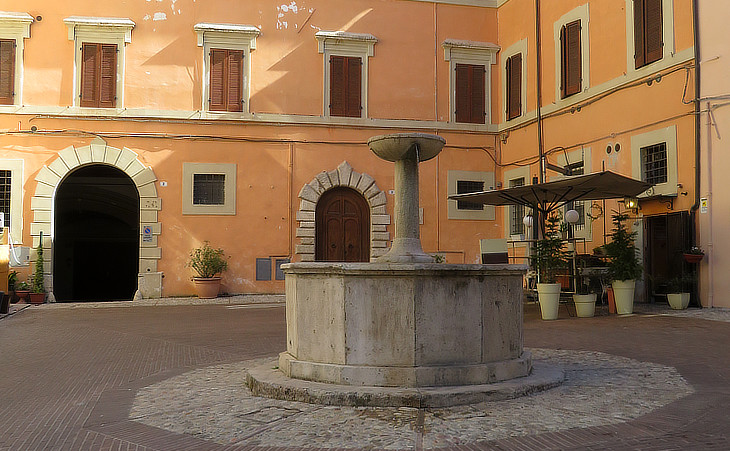 The fountain owes its bizarre name to its dodecagonal shape which called to mind ancient Israel and more specifically the Maccabees, whose name meant the hammerers, an artisanal activity which was consistent with the construction of the fountain. In origin and until ca 1800 it was located in Piazza Pianciani (see below). In Rome too some historical fountains have been relocated, e.g. Fontana di Borgo. 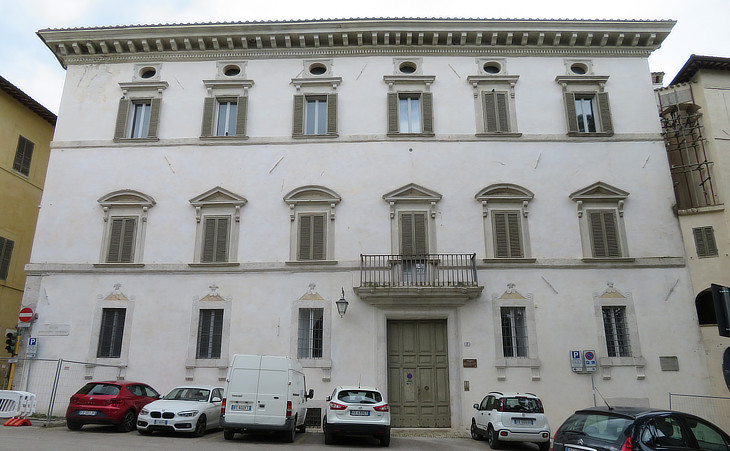 The Campello are one of the oldest noble families of Spoleto; their name is associated with Campello sul Clitunno, a property of them which included a famous early medieval temple/church. Evandro Cappello in 1612 paid tribute to Maffeo Barberini, Bishop of Spoleto (the future Pope Urban VIII), by delivering a speech on the virtues of the bees, the heraldic symbol of the Barberini. Bernardino Campello, brother of Evandro, acted as a diplomat for Pope Urban VIII and after having retired he wrote a history of Spoleto, in addition to poems and tragedies. A sarcophagus which was kept in the palace was moved near the Cathedral in 1954. 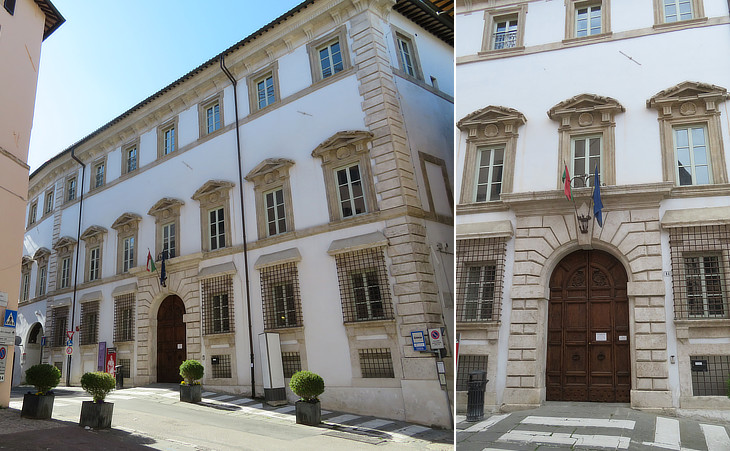 Palazzo Mauri (ca 1626) and detail of its façade

Andrea Mauri, who promoted the construction of Cappella della Santissima Icone in the Cathedral, built also this fine palace which was designed by Giovanni Battista Mola. Andrea Mauri held the important and lucrative position of Head of the Customs Administration of the Papal State during the pontificates of Pope Paul V and Pope Urban VIII. The palace stands over some Roman buildings, most likely baths. Palazzo Ancaiani was built on the site of previous family properties in the second half of the XVIIth century. It stands near the Roman theatre and its ground floor was decorated with stones taken from the ancient building. This may explain why Bishop Ludovico Ancaiani in ca 1740 regarded the columns of Tempio sul Clitunno as "old stones" and agreed to their use for the decoration of S. Filippo Neri. 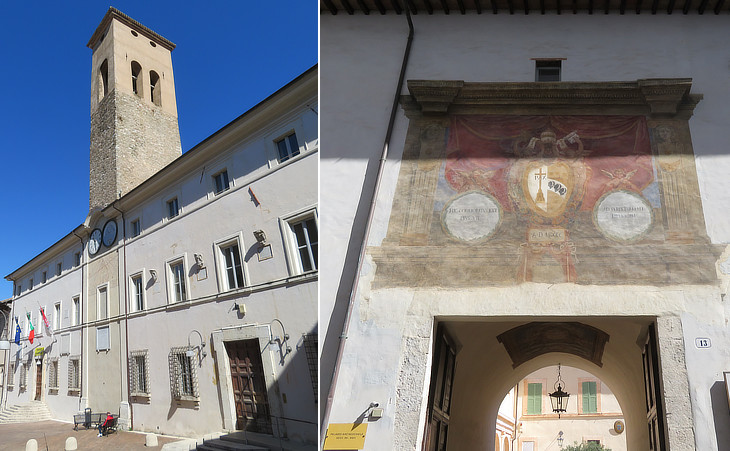 (left) Palazzo Comunale; (right) Palazzo Arcivescovile: entrance leading to the courtyard and to S. Eufemia with a fresco celebrating the passage of Pope Pius VII in 1800 on his way from Venice to Rome

The two palaces stand opposite each other near Via dell'Arringo. They both have a long history but their current external rather unassuming aspect is due to reconstructions which took place after they had been damaged by earthquakes. Other changes occurred in the late XIXth century which led to the discovery of a Roman house beneath Palazzo Comunale. 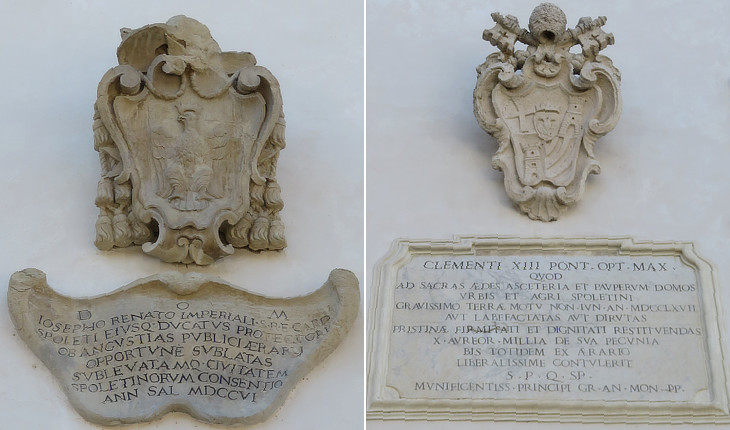 The Delegation is now turned into a Sub-Prefecture, under the government of Perugia, the seat of the central authority for Umbria. Thus Spoleto has lost the importance which attaches to a provincial capital, with its delegates almost resembling courtiers. These small provincial Papal governments - especially those ruled over by the Papal legates - possessed a certain amount of independence. All that is now a thing of the past. Prefectures and districts take the place of provinces and of the political divisions existing formerly. The old historic designations - Umbria, the Marches, and Sabina - are only retained for their geographical value.
Ferdinand Gregorovius - An excursion through Sabina and Umbria in 1861 - Transl. by Dorothea Roberts
Some coats of arms of popes and cardinals still testify to the Papal administration of Spoleto. 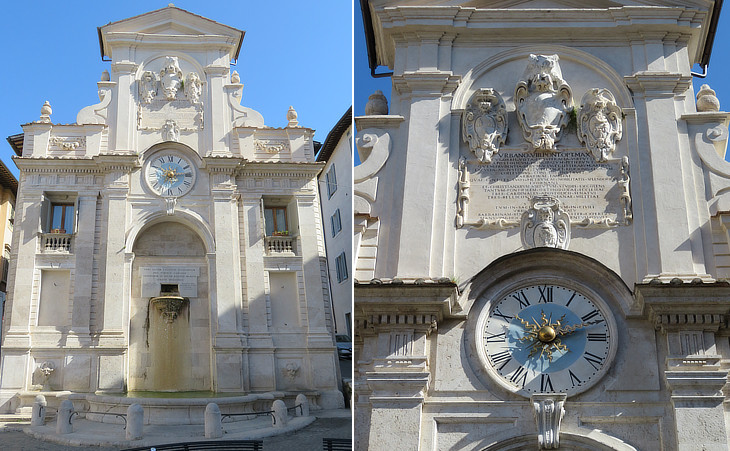 Pope Urban VIII was celebrated by a bust and a large inscription in the cathedral in 1644, but already in 1623 the City of Spoleto and Cardinal Francesco Barberini, his nephew, decided to erect a sort of monument with an inscription celebrating the deeds of the Pope when he was Bishop of Spoleto. An existing Renaissance fountain which stood on the back of a church in the market square of the town was chosen for this purpose. The additional upper section was designed by Carlo Maderno. The hands of the clock have the shape of sun rays, another heraldic symbol of the Pope, in addition to the bees (see a clock face at Sutri which retains the Italian Hour, in addition to the sun ray).
Another Baroque fountain of Spoleto can be seen in a page about Pope Clement XII. 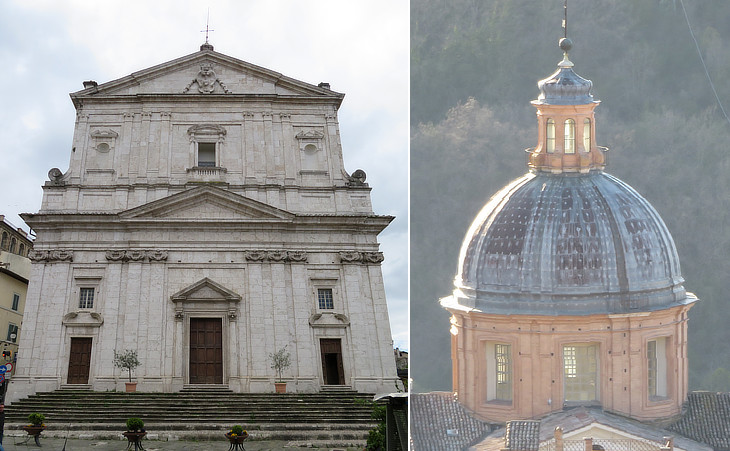 S. Filippo Neri: (left) façade; (right) dome seen from the fortress; its interior is shown in the image used as background for this page

The grand Roman Baroque church of Spoleto was buit by the members of the Congregation of the Oratory of St. Philip Neri. Its construction began in 1640, but the church was consecrated only in 1724. Loreto Scelli, the local architect who designed it, followed the pattern established at S. Maria in Vallicella, the first large Roman church of the Congregation, which is characterized by a large façade which hides the dome. 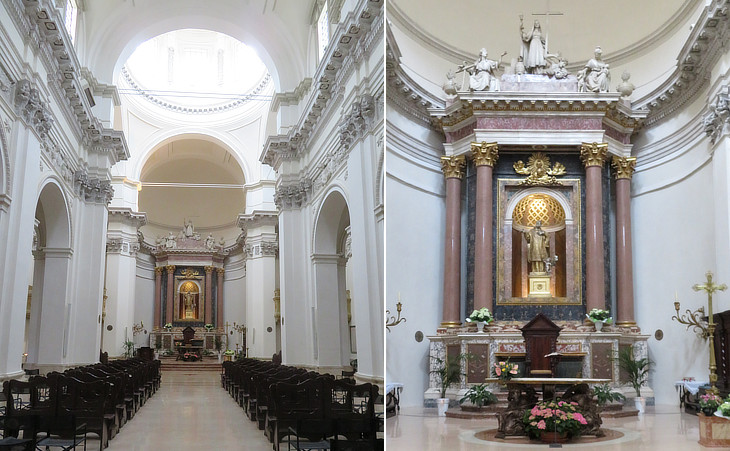 The decoration of the church was a lengthy process which lasted until the XIXth century and the interior does not shine with the polycromy of many Roman Baroque churches (see a page on this topic). This staircase seems to bring a XVIIth century touch in the heart of the historical town (see the staircase of SS. Domenico e Sisto in Rome). Actually it was designed in 1923 by Ugo Tarchi, an architect who is best known for his essays on the monuments of Umbria and his views on their restoration. 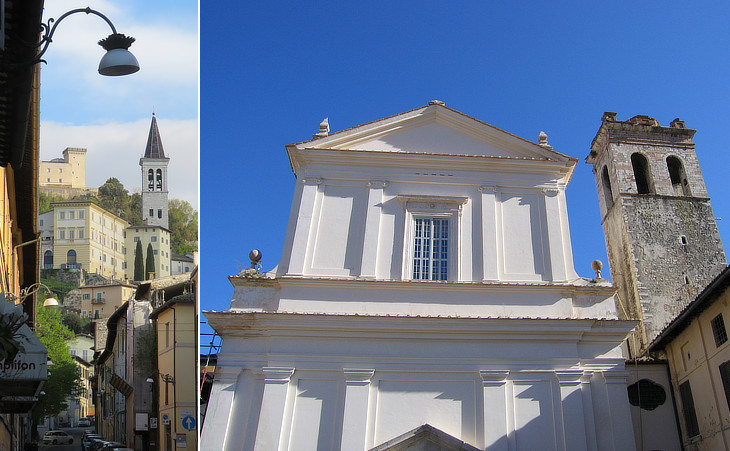 Giuseppe Vasi dedicated an entire book of his views of ancient and modern Rome to the nunneries of the city. The Popes promoted the construction of a series of charitable institutions related to the female world, in addition to the nunneries of the main orders: malmaritate (married women deserted by their husbands), pentite or penitenti (women who wanted to expiate their sins by conducting a life of penance), pericolanti (women in danger) and condannate (former convicts) lived a sorrowful life behind the high walls of female hostels and nunneries. At Spoleto the area at the foot of the hill which was surrounded by the medieval walls and had housed the Roman amphitheatre was chosen for building nunneries and hospices. You can see it from the fortress. 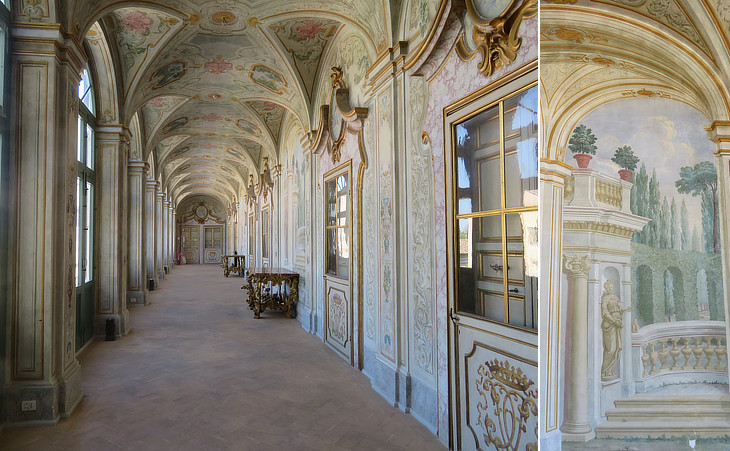 Palazzo Collicola: (left) gallery; (right) a detail of its decoration which shows a view of the (lost) gardens behind the palace which calls to mind those of Palazzo Corsini in Rome

Taddeo Collicola was the medico segreto (personal physician) of Pope Urban VIII. He held a well paid position and in addition he could promote the appointment of members of his family to other positions; in 1632 also Silvestro Collicola was appointed papal physician. The latter was also one of the physicians who gave assistance to the cardinals during the 1644 conclave, a very delicate task. Learn about Ferdinando Ponzetti, another papal physician who made a fortune. 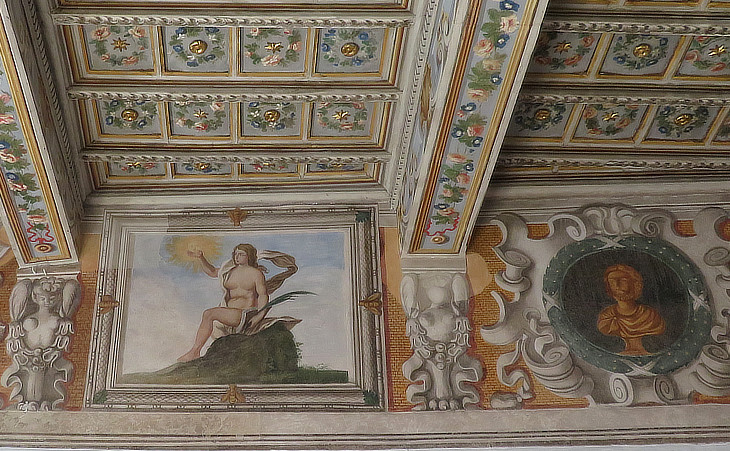 Palazzo Collicola: detail of the decoration of a hall which shows the bees, the heraldic symbol of the Barberini

In 1726 Carlo Collicola was appointed cardinal by Pope Benedict XIII and he held the position of Treasurer General of the Apostolic Chamber. The Collicola were able to complete their family palace in 1730. It was designed by Sebastiano Cipriani (see a chapel designed by Cipriani in Rome). The decoration of the new palace had many references to the Barberini family. Palazzo Collicola: (above) inscription celebrating the short stay at Palazzo Collicola of Pope Pius VI on his way back from Vienna; (below) a finely decorated chest with the coats of arms of Pope Urban VIII

The palace was richly furnished: its tapestries were bought from the inheritance of Queen Christina of Sweden, probably from Palazzo Riario Corsini. Palazzo Collicola was acquired by the City of Spoleto in 1939 and for many years it housed a school. 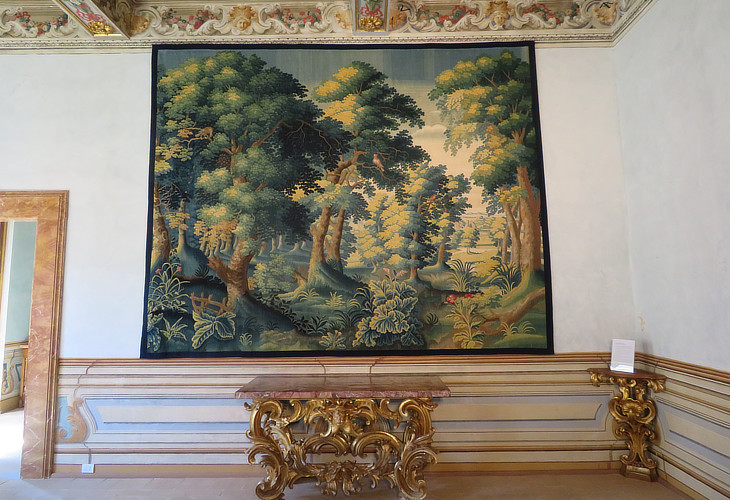 In 2000 the City of Spoleto decided to use the building to house a Museum of Modern Art. An extensive and lengthy restoration has brought back part of the palace to its old splendours, whereas other sections display the exhibits in a modern setting. 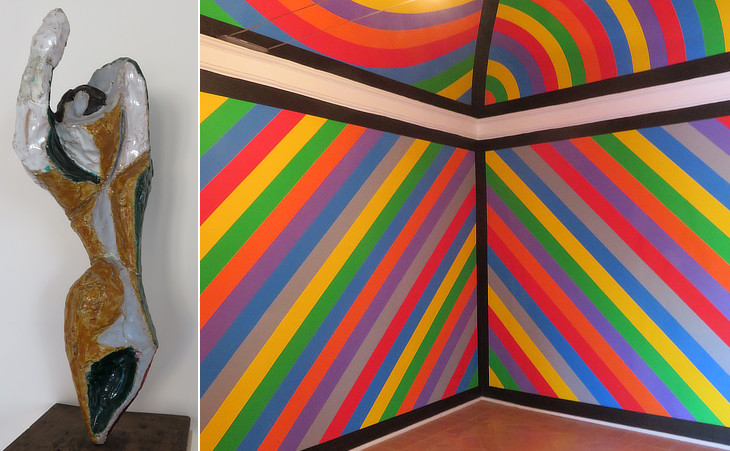 Gian Carlo Menotti, who wrote his first opera before he was 11 and went on to become perhaps the most popular and prolific opera composer of his time, winning two Pulitzer Prizes, died Thursday in Monaco. He was 95. His death, at Princess Grace Hospital, was announced by his son, Francis. Though critics often dismissed Menotti's music as maudlin and unadventurous, many of them still celebrated his impressive lyric gifts, his deft touch with orchestral sound and his talent for making opera comprehensible and enjoyable for people who had previously shunned it. (..) Menotti's operas continued the Italian lyric tradition epitomized by composers like Puccini, to whom he was often compared. (..) He also founded and directed for many years the Festival of Two Worlds, a long-running summer music festival that began in 1958 in Spoleto, Italy.
Bernard Holland - Obituary of Gian Carlo Menotti - International Herald Tribune - February 1, 2007
The music festival included also other forms of art. Over time many modern sculptures and paintings were donated to the City of Spoleto. 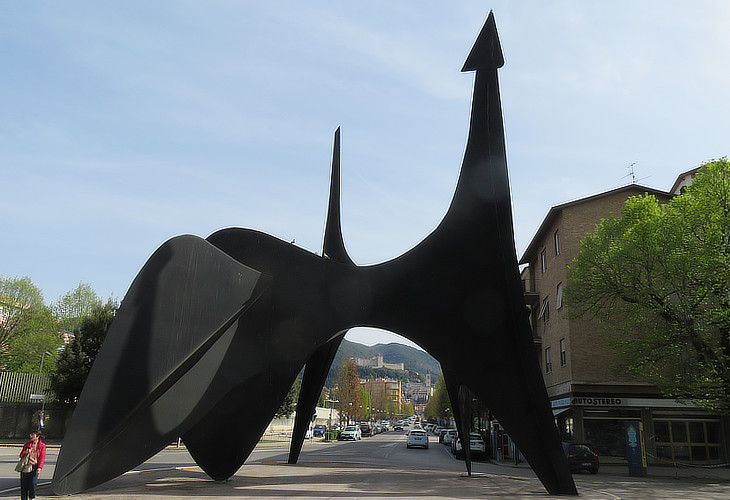 Teodolaphius, a Longobard Duke of Spoleto, a large black painted steel sculpture opposite the Railway Station which was made by enlarging 27 times a model designed by Alexander Calder (1898-1976) in 1962

Other pages on Spoleto:
Roman Spoleto - page one
Roman Theatre and Archaeological Museum
Medieval Spoleto
Churches without the Walls
The Cathedral
or visit Rocca di Spoleto or move to Tempio del Clitunno and Trevi.