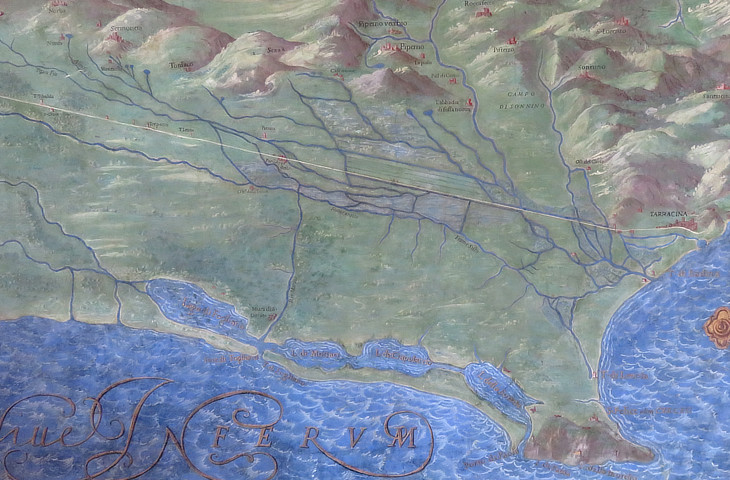 The Pontine Marshes in a late XVIth century fresco at Galleria delle Mappe Geografiche in the corridors of Palazzo del Belvedere in Rome; it shows the towns covered in this section and Mount Circeo and Terracina

The flat country between the Volsci (or Lepini) Mountains and the sea is actually an inclined surface where the coastal dunes are at a higher level than the ground at the foot of the mountains, thus causing the stagnation of several small rivers. In 312 BC the Romans dug a canal to protect Via Appia from being periodically flooded, but most of the plain remained an unhealthy marsh. Things got worse after the fall of the Roman empire and in the VIIIth century Via Appia was no longer practicable and it was replaced by a winding road which followed the ridge of the hills overlooking the plain and favoured the development of Sermoneta and other medieval towns.

View of Sermoneta and a watching tower

The marsh however was no protection against the raids of the Saracens, who took advantage of the coast being unpopulated. Between 700 and the year 1000 they could actually temporarily occupy the shores between Mt. Circeo and Torre Astura and from there move inland. This explains the fortified aspect of Sermoneta and the existence of watch towers built on high rocks.

The Walls and View towards Norma

The walls of Sermoneta were reinforced in the XVIth century when the risk of attacks from the sea increased again: the Ottomans had expanded their empire to the coasts of Tunisia and Algeria and from there they promoted corsair raids on the coasts of Italy. The walls were also necessary due to the fact that Italy was a battlefield for French and Spanish troops and their local supporters. Sermoneta is located on the top of an isolated hill not far from Norma.

In the early XIVth century Sermoneta became a fief of the Caetani, the family of Pope Boniface VIII, who from their base in Anagni expanded their possessions towards Rome and the sea. Their castle was confiscated by Pope Alexander VI Borgia who improved its fortifications; shortly after the death of the Pope in 1503 it returned to the Caetani to whom it still belongs.

The castle shows details of different periods but its prevailing aspect is due to Antonio da Sangallo the Elder, who had designed for Pope Alexander VI the fortresses of nearby Nettuno and of Civita Castellana. 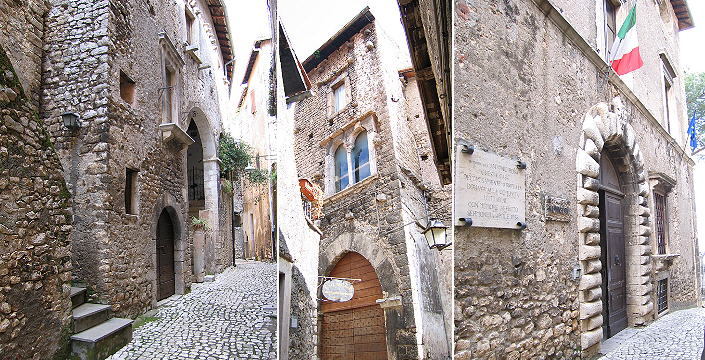 Sermoneta, because of its position along one of the two roads which for centuries linked Rome with Naples (the other one being through Palestrina and Anagni), provided services to merchants and travellers. In particular at the beginning of the XVIth century its Jewish population expanded because of the arrival of many Jews from the Kingdom of Naples. In 1492 King Ferdinand of Aragon and Queen Isabel of Castile decreed the expulsion of all Jews from their possessions which included Sicily. Many of them moved to the Kingdom of Naples, which, although ruled by a dynasty of Aragon origin, welcomed their arrival. In 1503 however it became a direct possession of the Crown of Spain and the Jews were on the move again: several families settled in the towns of southern Latium increasing the local communities. It was not the end of their journey: in 1555 Pope Paul IV ordered the Jews to live either in Rome or Ancona in a segregated area (the Ghetto). There the Jews, who had not a tradition of using surnames, but rather patronymics, had to live in a relatively large community and for practical reasons adopted as a surname the town they came from one of which was Sermoneta.

The Cathedral of Sermoneta is a sort of summary of the history of the town: built on an ancient Roman temple, it shows elements of all styles.

With the full reclamation of the Pontine Marshes in the 1920s and the opening of a new railway which runs at the foot of the hill next to the restored Via Appia, Sermoneta lost its role and its population decreased, attracted by the new towns built on the plain: several old houses were abandoned. Today it gives the impression of a partial recovery: its old churches and the memories of the past foster the feeling of belonging to a community which the new towns seem unable to create.