- Medieval and Modern Terracina
(detail of a fresco at S. Onofrio)

Ferdinand Gregorovius, a German historian best known for his studies on medieval Rome, spent some days at Anzio in June 1854; from that port on the Tyrrhenian Sea he saw Mount Circeo at the end of a long and sandy coast. He was fascinated by the view of this isolated mountain which is named after Circe, the witch-goddess who turned Ulysses' comrades into hogs (The Odyssey - Book X).
Gregorovius went nearer to the mountain by walking to Nettuno and Torre Astura, but only in 1873, almost 20 years later and when he was about to return to Germany, he set foot on it. He described his visit in Das Kap der Circe (Circe's Cape), an account he wrote for a German paper. 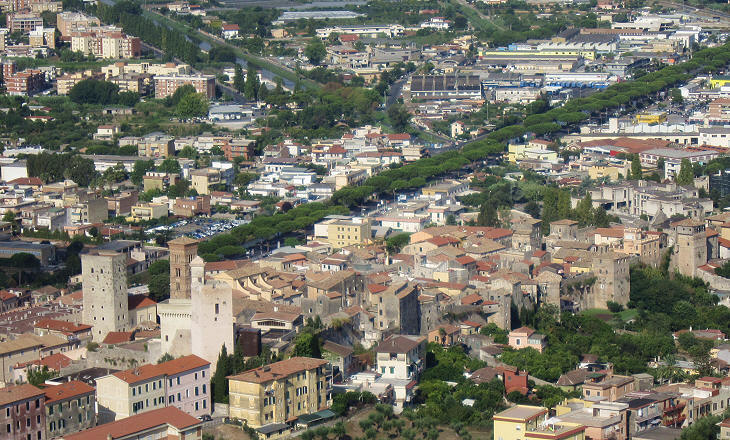 In order to reach San Felice, a very small town at the foot of Mount Circeo, Gregorovius first went to Terracina, a larger town where he could find adequate accommodation; he spent the Easter Week there and before returning to Rome he rented a boat with four oarsmen to go to San Felice by sea, because the path along the beach was not safe owing to the presence of wild buffaloes.
The focus of Gregorovius' account was on Mount Circeo, so he did not expand on Terracina although the town had a long history; this page covers its medieval and modern monuments while a separate page covers the ancient town. 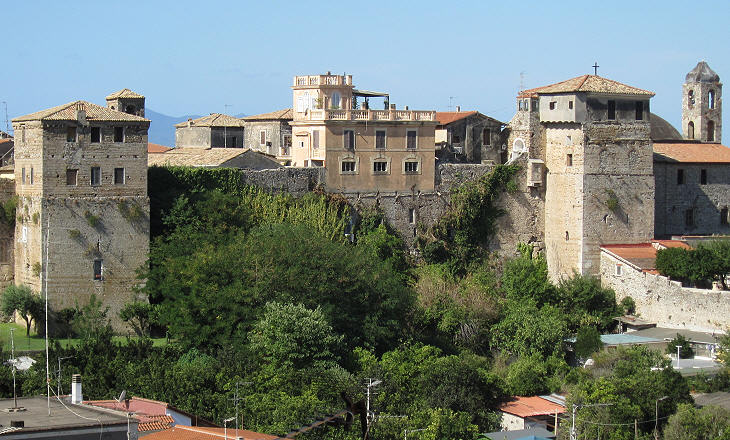 In 410 the Visigoths of Alaric sacked Terracina and in 455 the Vandals of Genseric did the same; the part of the town which lay near the harbour could not be effectively protected and the reduced population of Terracina concentred in the oldest part of the town which was on a hill and could therefore be more easily fortified.
The 568 invasion of Italy by the Longobards led to the division of the country; Terracina became part of the Duchy of Naples, a Byzantine possession which was surrounded by territories controlled by the Longobards. These political events led to the abandonment of the maintenance of the canals which prevented the formation of swamps in the coastal plain north of Terracina which eventually became one great marsh (Pontine Marshes). 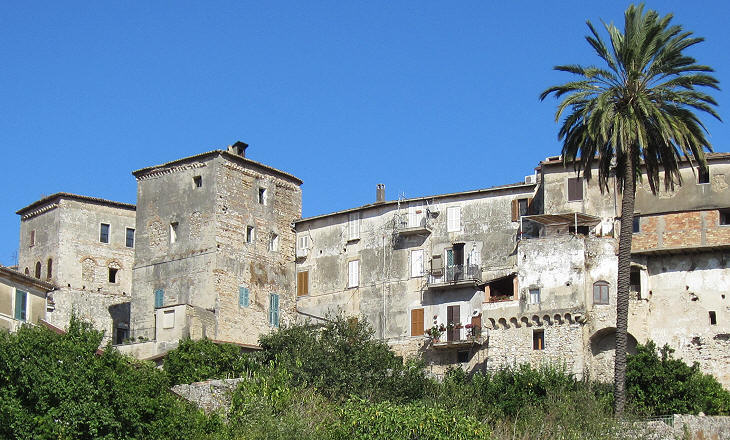 In the IXth century a new threat materialized for the inhabitants of Terracina: that of Saracen (Arab) raids; in 846 even the Vatican and S. Pietro were sacked. The Saracens established a permanent base at the mouth of the Garigliano River, south of Terracina, which therefore was under constant threat and no longer in contact with Naples by land. Only in 915 an alliance promoted by the pope was able to dislodge them. The Saracen threat on Terracina completely subsided only after the development of the maritime republics of Amalfi and Pisa and the Norman conquest of Sicily (1061-1091). 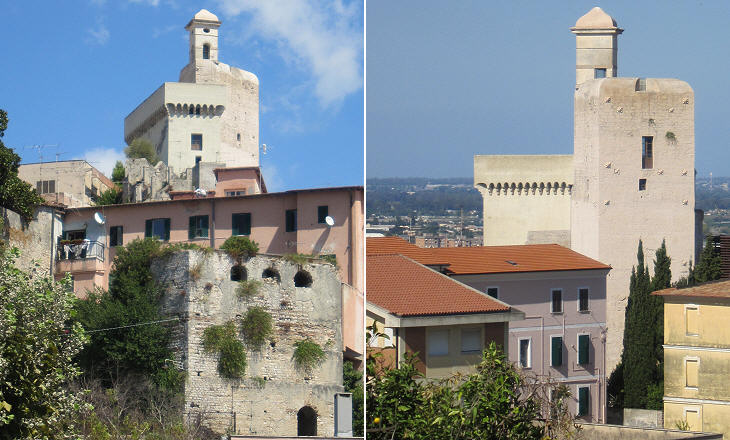 In 882 Terracina was formally included in the territories of the Papal State, but it enjoyed a large autonomy which helped the development of the Comune, a form of city-state. This condition was put at risk in 1143 when the Frangipane, a very powerful Roman family, managed to conquer and fortify the highest tower of Terracina; only in 1202 were the inhabitants of Terracina able to force them out. The Frangipane however retained some power in the region as they controlled Norma, on the road between Rome and Terracina, and Astura, a small castle along the coast. 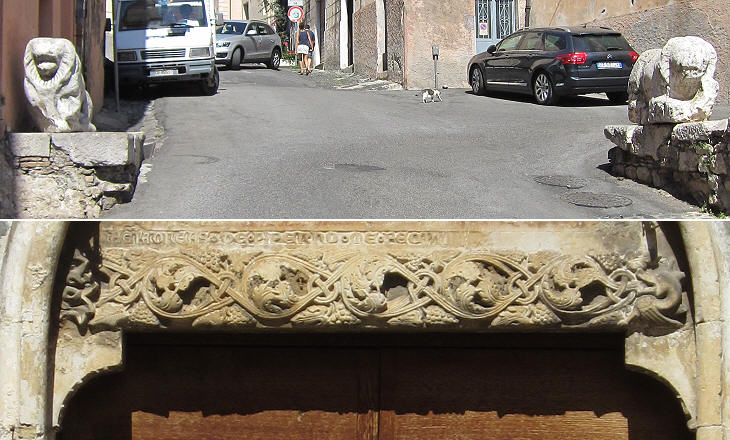 (above) Lions guarding the entrance to the medieval town at the site of former Porta Albina; (below) Chiesa dell'Annunziata: detail of the portal

Medieval Terracina was very small; its maximum length did not exceed 500 yards; in 1831 Porta Albina, the medieval gate which controlled access to the town from the sea was pulled down, but the two ancient funerary lions which guarded it were left at the site.
L'Annunziata was the parish church of the neighbourhood outside Porta Albina; it was damaged during WWII and it has been abandoned for a long time; its portal is embellished by an elegant frieze with the name of its sculptor: MAGI[STER] A[N]DREAS DE PIPERNO ME FECIT. 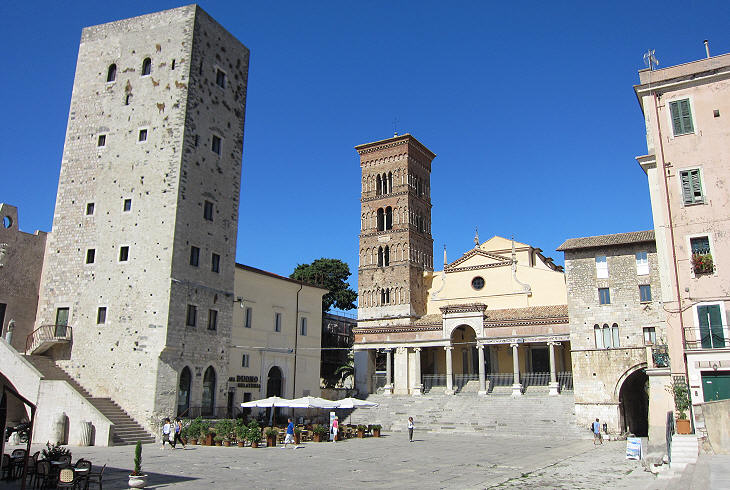 Main square (Foro Emiliano): (left to right) Torre Frumentaria (a medieval tower which was turned into the municipal granary), the Cathedral, Palazzo Venditti

The bombings of Terracina in 1943-1944 had the indirect effect of unearthing a section of ancient Via Appia and the foundations of some buildings of the Roman forum. Today the main square of Terracina is larger than it was before the bombings, however it retains its medieval character with three large monuments which were built between 1074 and 1350. 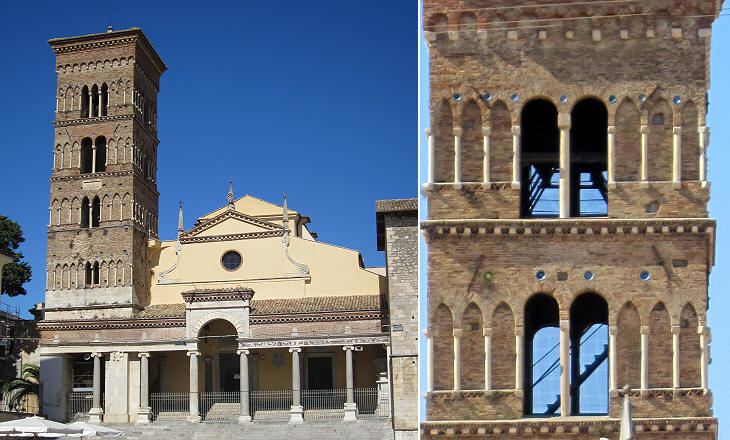 Cathedral of Terracina and a detail of its bell tower 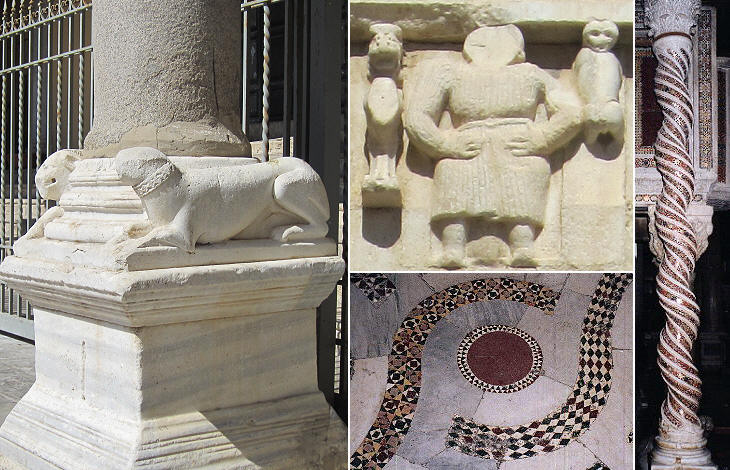 Details of the Cathedral: a) unusual sculptures portraying a hound (left) and a fat man on a throne between a dragon and an owl (centre-above); b) Cosmati decorations on the floor (centre-below) and on the support for the Paschal candle (right)

Similar to what often occurs in medieval monuments, the meaning of some reliefs and sculptures which decorate the Cathedral is still to be fully understood. 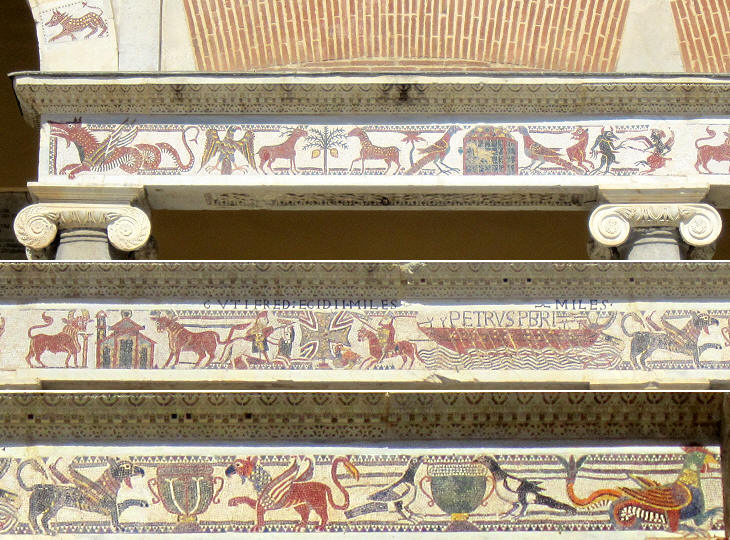 Mosaics of the external frieze

While the interior of the Cathedral retains several Cosmati works, the mosaics of the portico were designed by artists coming from Sicily; the remaining half of the frieze is thought to represent events associated with the First Crusade, owing to the presence of two knights at the sides of a cross; Gutifred is perhaps Godfrey of Bouillon, the leader of the Crusade and Egidio a bishop who wrote a history of the Crusade. The image in the background of this page is based on the first image of the frieze. 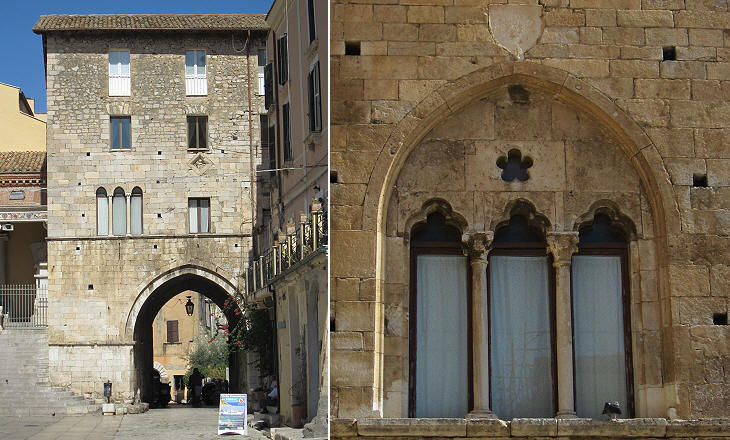 (left) Palazzo Venditti; (right) window on the side towards the Cathedral

Terracina retains several medieval buildings in the narrow streets behind the Cathedral, but Palazzo Venditti is the finest one; the large Gothic arch above which it was built indicates the influence of Cistercian architecture at nearby Abbazia di Fossanova; for some time the palace was used as the town hall.
Terracina declined again towards the end of the XIVth century when the popes imposed more direct control over the town. In 1534 it was sacked by Ottoman corsairs from Tunis. The town is almost without monuments of the period 1400-1700. 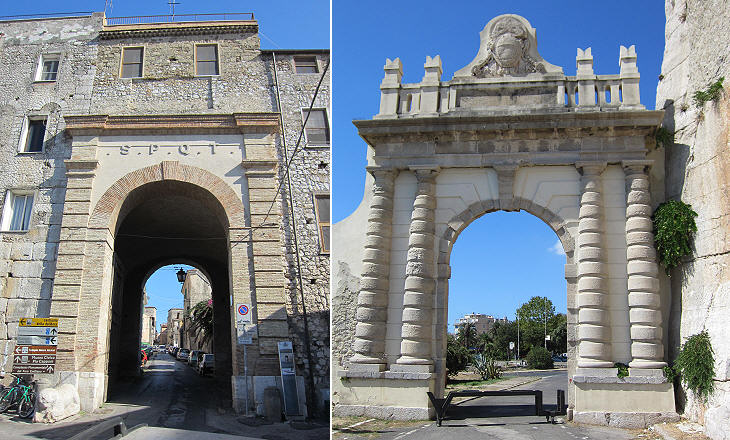 The new town descends gradually towards the beach and lines the shore; it was considerably augmented by the late Pope, who built a palace, and resided here during the spring and autumn, in order to urge on by his presence his favorite undertaking. In truth the draining of the Pomptine marshes is one of the most useful as well as most difficult works ever executed.
John Chetwode Eustace - A Classical Tour through Italy in 1802
Terracina greatly benefitted from the decision by Pope Pius VI to reclaim the Pontine Marshes by digging a canal which collected the excess water from the foot of the mountains and discharged it near Terracina. The Pope enlarged the town by including the neighbourhoods outside Porta Maggiore and Porta Albina and he replaced these gates with new ones. 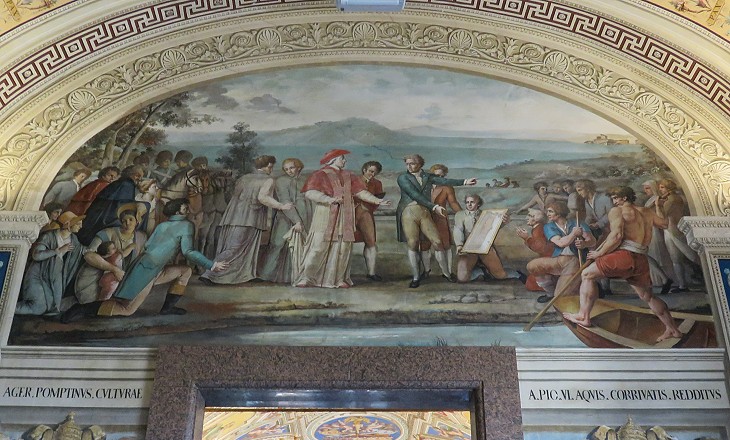 Daybreak found us in the Pontine Marshes, which do not actually look as dreary as people in Rome usually describe them. From one cross-journey, one cannot, of course, really judge such a vast and ambitious project as the drainage operations which have been undertaken at the pope's orders, but it looks to me as though they are going to be largely successful.
J. W. Goethe - Italian Journey - translation by W. H. Auden and Elizabeth Mayer - Penguin Books
The principal fault at present is said to be in the distribution of the land drained, the greater part of which having been purchased by the Camera Apostolica was given over to the Duke of Braschi (the Pope's nephew). Eustace 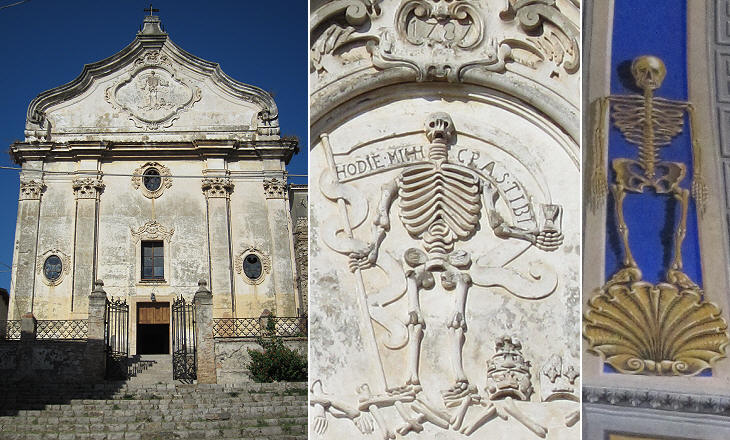 The only XVIIIth century church of Terracina is a rather unusual one; its construction started in 1733 on the site of a previous medieval church at the initiative of Confraternita della Buona Morte, a brotherhood having the purpose of helping poor families to bury their dead. The members of the brotherhood wanted to have a church resembling S. Maria dell'Orazione e Morte in Via Giulia. However, due to lack of funds, the church was only completed in 1787 when Pope Pius VI visited Terracina; at that time the Reminders of Death which decorated it were out of fashion. 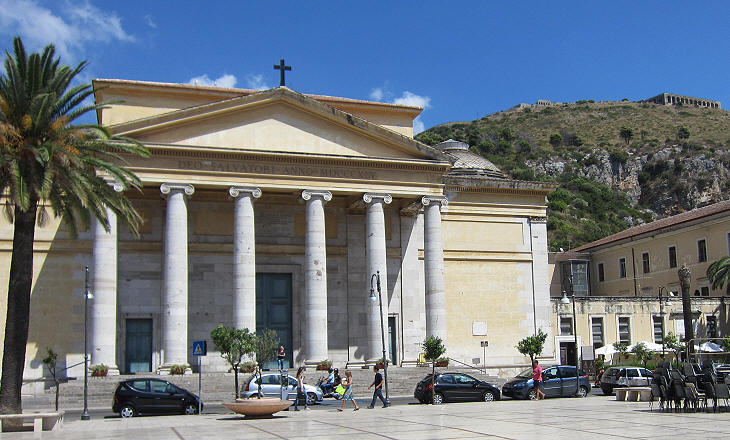 Pope Pius VI most likely was not very pleased by the sight of Chiesa del Purgatorio and he commissioned Giuseppe Valadier a large church for the new development of the town in the plain; the church however was not built and the project was not resumed until 1830 by Antonio Sarti, who made some changes to it; SS. Salvatore was eventually completed in 1847. Sarti designed also Nuova Fabbrica del Tabacco in Rome in a similar style.